As much as there were recurring places in K-Dramaland this year, there were also just as many recurring neighborhoods. It was fascinating to see characters from different dramas walking down the same streets – and even living in the same area.

I especially like seeing this, and how the distinct vibe of each neighborhood comes across through different dramas. The lovely streets of Samcheong-dong filled with boutiques, flower shops and traditional houses; the playfully painted houses located in the tiny uphill alleys of Ihwa Mural Village; and even the interesting juxtaposition of large-scale parks and fancy business buildings that make up the north and south side of Sangnam-dong.

So, Mich and I thought it would be fun to also put together a list of the most seen neighborhoods of this year – hope you’d like it as much as we do.

Here’s my list to start things off
(Many thanks to Mich to jump in to write the Cheongdam-dong part together).

To me, it seems like there are two kinds of Hongdaes: the central ‘tourist Hongdae’ that’s radically changed over the past years with international brands taking over small boutiques; and the ‘alternative Hongdae’ that still thrives at the periphery of the other.

We had a good featuring of both sides of this popular neighborhood in K-Dramaland this year.

We’ve seen the gateway to ‘touristy’ Hongdae in My Golden Life (twice till now), and the tourist information booth that sits right in the center of Hongdae was featured quite prominently in Age of Youth 2.

Strong Woman Do Bong-soon was a bit more subtle in featuring another central spot right in the heart of Hongdae.

Of course, we’ve also seen plenty of cafés (and a restaurant), which Hongdae is famous for, and those in rather tiny, not-so touristy places.

Those cafés were especially prominent in Age of Youth 2 (with Café Green Cloud as a central hang-out and meeting spot) and Weightlifting Fairy Kim Bok-joo.

But we have seen them also in Two Cops, Temperature of Love, Radiant Office, Love Returns, Tomorrow With You and Reunited Worlds.

Not to forget the famous LP bar that was the main meeting place in The Liar and His Lover, and also seen in Go Back Couple.

But we’ve also witnessed how quickly Hongdae and its café landscape shifts. In just a couple of months (weeks?) after being seen in Tomorrow with You, Café Kkomma closed it doors.

I personally liked discovering Gyeongui Line Forest Park – which seemed a nice place to take a stroll in Because This Is My First Life and to fall in love in I’m Not a Robot — that sits just at the border of Hongdae.

The same goes for the Mecenatpolis Mall in The Best Hit. I saw it when it was still under construction and it was nice to finally see the end results on screen.

Also sitting at the outskirts of Hongdae (or more precisely, bordering it) is Yeonnam-dong, a residential neighborhood that has its own fair share of cafés.

Hyun-soo chose to live here in Temperature of Love and it appeared as the neighborhood where our friends in Fight For My Way lived and Ji-Young and Byeok-Soo also passed through this neighborhood in Individualist Ms. Ji-young.

A café here was central for Ji-wook and Bong-hee to solve a case in Suspicious Partner, and who could forget the swooning moment when both of them found shelter from the rain — also in Yeonnam-dong?

It’s really only this particular moment that make Yeonnam-dong the definite add-on to a Hongdae visit.

This year, I learnt that that one of the largest park areas in Seoul and one of the main business quarters (mainly that of broadcasting companies) belong to this same neighborhood: Sangam-dong. 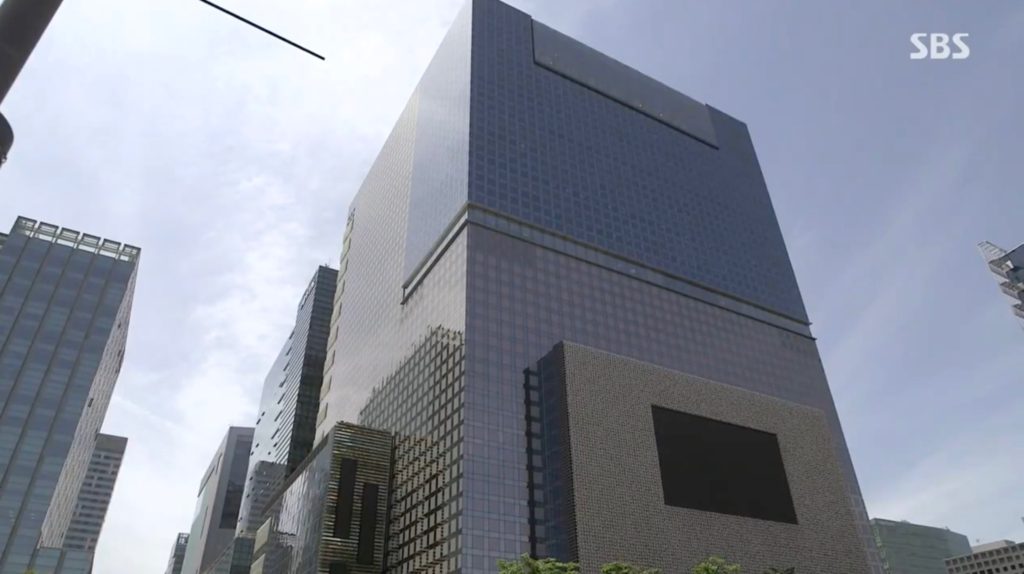 The make-up of the neighborhood is like yin and yang. In the north it has its business side, and as it is every year, characters in K-Dramaland would be hard at work – or preventing crime, as in Criminal Minds – over here.

This year, it was seen in Two Cops, Mad Dog, Temperature of Love, Because This Is My First Life, Fight For My Way, The Liar and His Lover, The Best Hit and Radiant Office.

It is also in this vicinity that the characters love and lost. It was especially so at the Deurim Tower and at the DMC Cultural Park – for it was here that relationships began, and some that ended before they could even begin.

It was also right in this busy park surrounded by fancy skyscrapers and decorated with public art that Hyun-jae realised that he had really time traveled in The Big Hit.

On the other hand, on its south-side, Sangam-dong has large-scale parks — like Nanji Hangang Park and World Cup Park with its Haneul Sky Park — that dominate the landscape with great scenery. This is also where you can find one of the most beautiful views of Seoul.

We have seen this part of Sangam-dong in Go Back Couple, Manhole, Introverted Boss, Strong Woman Do-bong Soon, Tomorrow With You and Father I’ll take Care of You.

If you plan visiting this park, make sure to go to Haneul Sky Park in the late afternoon so that you can enjoy both – the park and this night view:

‘High-end’ seems to be the term to describe this neighborhood with one of the most famed shopping streets in Seoul. High-end shops, high-end restaurants and cafés, high-end wedding halls and high-end flower boutiques… you get the idea.

But, this is all part and parcel of Cheongdam-dong’s character.

And just like in every other year in K-Dramaland, quite a number of characters continued to visit these places for various reasons. Like getting married (The Valenti Wedding Hall in Introverted Boss and Luka 511 in Fight For My Way), sealing deals (Lab XXIV in Bride of the Water God 2017) and breaking engagements (Luka 511, also in Introverted Boss).

The ladies of Avengers Social Club met in Dover The Flower Boutique, as did other K-drama characters in places like Coffee M Works (Father I’ll Take Care of You) and Kim’s Double Life (Chicago Typewriter).

Characters from My Golden Life, Lookout and Reunited Worlds even shopped (St Dupont) and/or worked (SMT Seoul) on the same street.

But what I most liked discovering this year was that this neighborhood also has residential areas, and that a rather modest middle-class family like the Han family (in Father I’ll Take Care of You) lived here; something which is quite counter-intuitive, when thinking about high-end Cheongdam-dong.

I usually love the feeling of ‘treasure hunting’ when looking for filming locations.

For Bukchon Hanok Village, however, it’s different. I love being able to recognize places I’ve passed by so many times while in Korea.

My favorite street in Seoul? It’s here, and it appeared a couple of times in K-Dramaland this year too – just recently again in Black Knight.
My favorite restaurant in Seoul? It was here (RIP).
My favourite café in Seoul – you guessed it, it is here as well.

So I was happy to see how this neighborhood was a constant this year – especially in its second half – with K-Dramas like Because This is my First Life, Temperature of Love, My Golden Life and now also Black Knight.

Maybe you could have also fallen in love with this part of Seoul by now?

When walking from Bukchon to Samcheong-dong (which is just next to it), you’d quite immediately notice a change of atmosphere. The posh boutiques stand tall at the main street of Samcheong-ro with its trademark stonewall (Temperature of Love, The Liar and His Lover), and tiny streets like Yolgok-ro 3-gil (Meloholic, My Golden Life, Mystery Queen) and Bukchon-ro 5ga-gil (Two Cops) are full of small cafés (like Jiyugaoka or 57th Gallery), restaurants, handicraft shops, fashion boutiques and flower shops, mixed in with traditional houses like Yoon Bo Sun’s Anguk-dong Residence.

This is also a bit of an arty place with the Songwon Art Center (which appeared as a restaurant in Temperature of Love) and the We Are Young Mural.

Quite a handful of characters in K-Dramaland lived and worked here this year (or close to here) which might explain why we saw them rushing — running or cycling — most of the time through these exact streets in this part of town; especially in My Golden Life and Temperature of Love.

But then again, these characters would also, at times, dwelled in places – like how Hyun-soo did in front of Yoon Bo Sun’s residence in Temperature of Love. Hong-joo and Jae-chan lingered at the We Are Young Mural in While You Were Sleeping. And in Manhole, Bong-pil and Soo-jin sat down in front of it to have important conversation, whereas Soo-chang – in Dong-tak’s body – converses with himself while walking through Bukchon-ro 5ga-gil in Two Cops.

Han-kyeol and So-rim came to Samcheong-dong for a date in The Liar and His Lover, as did Ye-ri and Eun-ho in Meloholic (the kiss!), while Sul-ok and Wan-seung in Mystery Queen came for a stroll.

Also, the On family in Temperature of Love decided to start their businesses here. While the son, Jung-sun, ran ‘Good Soup’, his mother had Bott[e] Flower Boutique (also seen in While You Were Sleeping).

Should we immigrate and also set up business here?!

We’d love to know which neighborhoods you’ve noticed or recognized.

Also, stay tuned for Mich’s list of most frequented neighborhoods in the next blog entry!