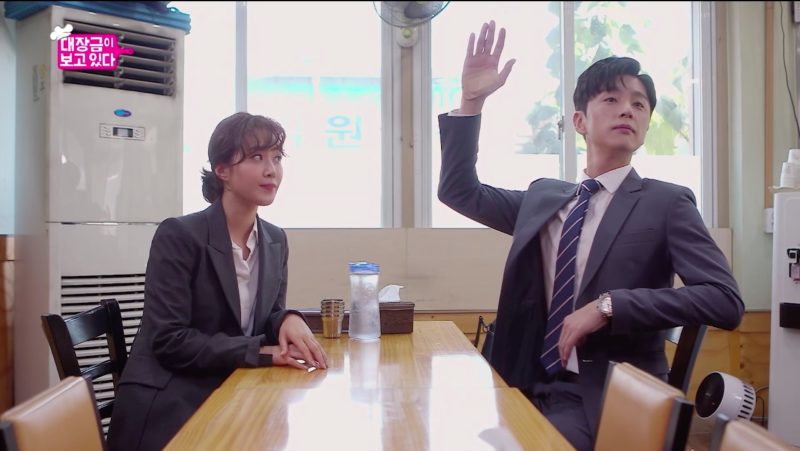 Disclaimer: This overview/blogpost is © Koreandramaland.com and is NOT PERMITTED to be reproduced/reposted on other websites, whether in part or in full, without prior consent or permission from KDL. All screencaps belong to MBC.

I’m back to continue the roll-call of restaurants found in mukbang-cooking show-comic-Kdrama Dae Jang Geum Is Watching (대장금이 보고 있다)! Despite my never-ending late-night cravings (thanks to all the rewatching and recapping I’ve had to do to write Part 1), I’ve managed to power through many mouthwatering moments to bring you the rest of Han San-hae’s (Shin Dong-wook) bucket list.

As a recap: this listing of restaurants/eateries seen in the drama comes complete with San-hae’s personal ratings — also known tongue-in-cheek as the ‘San-staurant Guide’ (산슐랭 가이드).

Warning: Delicious food pictures ahead; proceed at your own risk, especially if on an empty stomach! Click on the header names to view individual location listings.

Seung-ah may have been proud to finally treat San-hae to a meal she think he’d like, but little did she expect for him to already have a connection with this eatery, which specialises in Venetian cuisine (and that it was already on his bucket list). Everything comes full circle when the pair run into Jin-young (special cameo by trot singer Hong Jin-young), San-hae’s college classmate and first girlfriend, who’s now a well-known food blogger known as ‘Lemon Water’ (sounds familiar)?

Old connections die hard; so it’s no surprise that San-hae and Jin-young would wax lyrical together (with Italian accents, no less) about this Italian restaurant’s tangy and nutty, yet still clean-tasting halibut carpaccio with pistachios (광어 카르파쵸와 피스타치오), and the al dente halibut tartar pasta (광어 타르타르 파스타), cooked in a sauce made from halibut broth. Though the previous ‘CC’ (campus couple) seemed to enjoy their meal, it appeared to leave Seung-ah with a slightly sour taste in her mouth — not because of the lemon oil, though.

“Great quality halibut, paired with sauces and dressings that give a taste of Venice. Everything tasted perfect. However, the dishes here are somewhat pricey, and the restaurant has limited seating. Waiting is mandatory unless you have a reservation.”

This is truly a place where dreams come true — in more ways than one. Aside from ticking off yet another place on his bucket list, San-hae also got to share this culinary experience with none other than Seung-ah, whom he had greatly hoped would get the dining vouchers he’d purchased for the company Christmas gift exchange. “You said a meal with beef always has strings attached,” Seung-ah says cautiously. “Yes, that’s right,” came San-hae’s cool reply, much to her delight. “That’s why I want to buy it for you.”

Despite Seung-ah’s prior grilled beef experience at Hibaci, having beef at a Western steakhouse was a different ball game… what should the doneness be? Cue San-hae and his steak-pertise: he orders a dry aged T-bone (드라이 에이지드 티본) with both the sirloin and tenderloin, in medium rare — since its cooking time on a hot plate has to be taken into consideration — along with sides of french fries and creamed spinach. Even the order of consuming the steak should also be considered, as San-hae points out. “You have to try the sirloin first, which is fragrant and chewy, then eat the soft tenderloin to rest your tongue.” Judging from their very satisfied reactions (amidst some distractions from Jung-sik’s affections), San-hae’s definitely hit yet another bucket list home run!

“The fragrant prime sirloin and tenderloin steak were dry aged with care. The ambience was perfect for the Christmas season, but somehow it felt like there were three of us eating, instead of two, due to my own uneasy feeling.”

Manager Lee (Jung Yi-rang) certainly won’t be complimenting Team Leader Won Bin (Kim Ki-ri) on his terrific ‘sense’ (센스쟁이, or senseujaengi in Korean) and timing on this day. Despite Director Lee finally being able to have San-hae all to herself (at least as a meal companion), accidental party crashers Seung-ah and Won Bin turn up to have lunch at this eatery too — much to San-hae’s relief. Surely, they were just there to enjoy the homey Korean dishes, and not to crowd Director Lee’s little lunch date…

San-hae’s choice of the chicken bulgogi (닭불고기) couldn’t have been more comforting: chicken thighs braised till tender in a pineapple and salt mixture, mixed in with a thick array of sauces, and fortified with a rich broth boiled in an iron pot. The crunchy beansprouts that the final dish is topped with adds a complementary texture, with San-hae (and Seung-ah at the other table) advising against mixing the two components. All that said (“Fireworks happening inside [my] mouth”) and eaten, there was no way San-hae wouldn’t have enjoyed that meal… right?

“Flavours like mom’s cooking without the MSG, plus nutrients adding up to a proper meal.” Originally rated 3.5 stars — “but because my mind was on the other table, plus the interruptions from Manager…”

Oh, San-hae. You’ve really done it this time, haven’t you. You broke Seung-ah’s heart by rejecting her confession and now you want to win her back through food? I’m not sure if grilled freshwater eel (민물장어구이) is the best way to go about it, but at least she’d benefit from the ‘health food’ you’re (indirectly) treating her to, along with the rest of the RG Motors sales team — clearly, a price you must pay for letting her go.

The team got to enjoy two types of grilled eel at San-hae’s expense: salted (장어 소금구이) and marinated with gochujang, or red pepper paste (장어 고추장 양념구이). The fresh, meaty eels — imported daily from Jeolla province — are only grilled upon order, and its chewy, clean-tasting meat can be made even juicier, simply by adjusting the heat on the grill. Each piece can be eaten on its own, dipped in a healthy homemade soy sauce (that caught San-hae by surprise), or paired with the various side dishes from around the region. This must have been one meal that ‘r-eel-ly’ rocked everyone indeed, since it even made San-hae channel the late Freddie Mercury!

“Along with high-quality side dishes filled with flavors of Jeolla province, I’d like to give a high score for the best quality eel. But [I give it 3 stars] because of the unexpected over-the-top expense and since I wasn’t able to comfortably lecture about the food.”

With all the drama that took place in between, and a tearful, heartfelt reunion, San-hae and Seung-ah have finally come full circle. And even more so a year later, as they visit an eatery of the same name as their first restaurant, though a completely different establishment. Together, they meet the creme-de-la-creme of RG Motor’s VIP customers (special cameo by Yang Dong-geun), with three of his own mini ‘VIPs’ in tow. Tough to talk business with children around; but Seung-ah sweetly offers to take the kids out to play, leaving it to San-hae to seal the deal.

Even before tasting the cheonggukjang stew (청국장찌개 — fermented soybean paste stew), San-hae draws attention to the freshly cooked rice, and how the moistness in its texture and taste reminds him of “[his] childhood in the countryside”. Together with the stew, boiled with stir-fried winter kimchi, it makes for quite a palatable and heart-warming combination — so much so that the duo ended up rapping about it!

“Clean tasting food with good ingredients without MSG. More than anything, it was the warmth it provided the children’s dad, along with the joy that comes with a successful deal.”

Sorry — I’m not talking about a Min-hyuk sandwich here (I wish); while this isn’t quite restaurant fare, nor is it considered a convenience store creation, this is certainly one combination that you can try at your local ‘S’ sandwich store! Beef steak, extra cheese, all vegetables (which you can customize to fit your preferences), topped off with crushed potato chips.

I decided to give it a go for lunch one day — and I must say that Min-hyuk (at least his character in the show) certainly holds his own with foodie creations, maybe owing to all the ‘Jin-mi Specials’ he’s had the joy of sampling. Tip: Add lots of crushed chips (I used Lays Nori Seaweed, but would have preferred Sour Cream & Onion) for a good crunch! Also note that the chips get soggy after a while, so be sure to enjoy it quickly.

잘먹었습니다~
(We enjoyed the meal!)

“There’s two types of food in this world,” San-hae muses as he enters Ilmi Kalguksu in episode 2, “The food we’ve already tried, and the food we’ve yet to try.” Well, I’m certainly looking forward to visiting some of them on my next trip to South Korea, to find out how they measure up to the ‘San-staurant Guide’! And thank you, San-hae, for guiding us through the ins and outs of enjoying our meals to the fullest, with your nuggets of culinary wisdom and appreciation. I’ll miss how you so lovingly gaze at your food.

Hope I’ve whet your appetite enough through this extensive 2-part restaurant list 😉 If you have the chance to try any of the dishes at the featured restaurants/eateries, I certainly hope it’ll be a meal that’s worthy of 5 stars — especially if in the company of those you love. ⭐