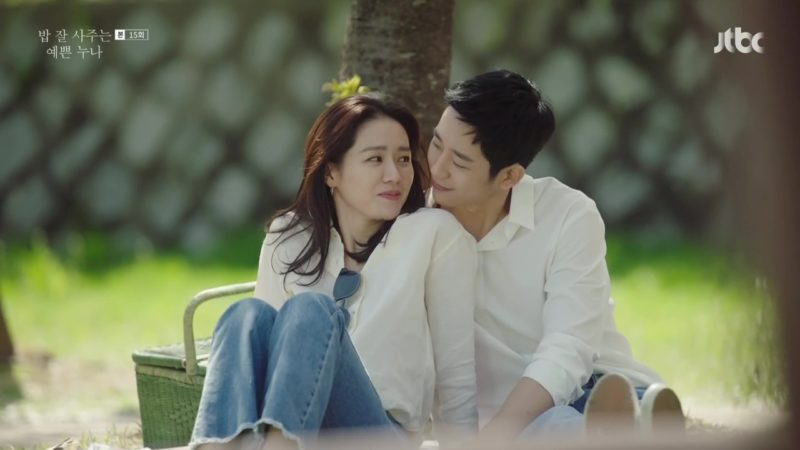 Disclaimer: This overview is NOT PERMITTED to be reproduced/reposted on other websites, whether in part or in full, without prior consent or permission from KDL. All screencaps belong to JTBC. 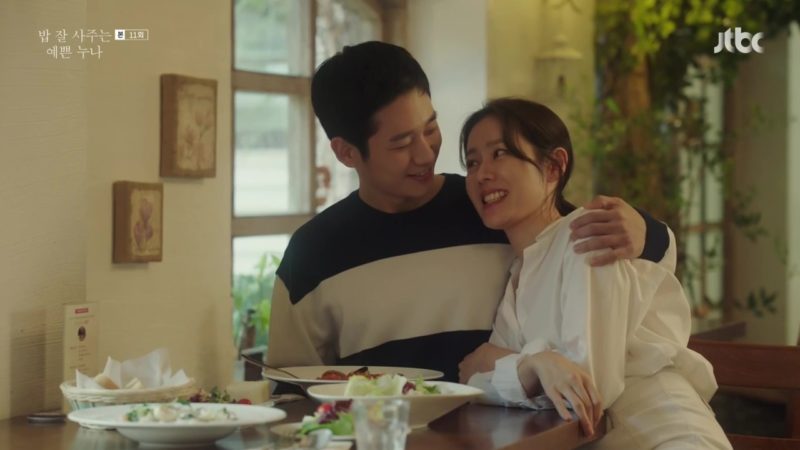 This drama follows Yoon Jin-a (Son Ye-jin) — a thirty-something who still lives with her parents — and how she grows through obstacles faced when falling in love, and speaking up against sexual harassment.

When falling in love with the younger Seo Joon-hee (Jung Hae-in), she is fiercely opposed by her mother who thinks she ‘can find better.’ But it is this opposition that forces Jin-a to become an adult while finding herself in the process.

During that same time, Jin-a finally decides to speak up against the sexual harassment she experiences at her workplace, and learns about the persistence and the force of institutionalized cooperate sexism and misogynism. Broadcasted in times of the #metoo movement, this drama is a rather dark and realistic comment on the possibilities of rapid societal change, when facing mechanisms that were fine-tuned over centuries to keep women as ‘the second sex.’
— by Marion KDL 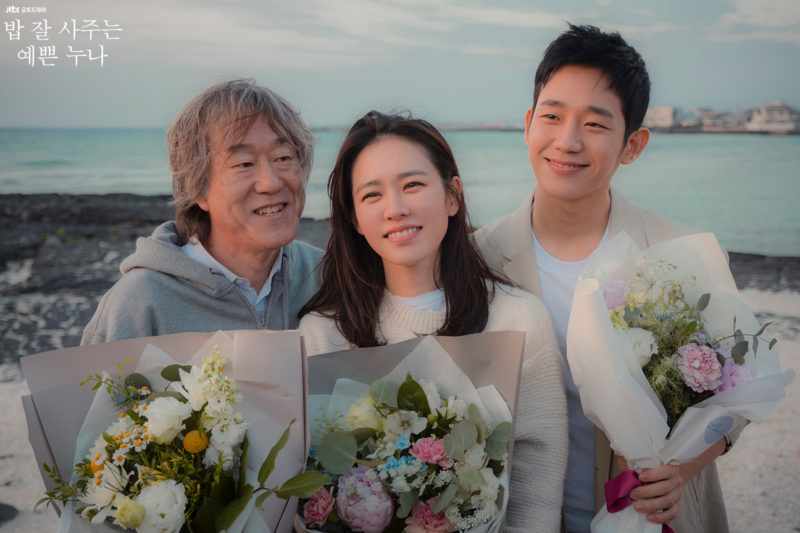 This drama is written be KIM EUN (김은). But, and very surprisingly, there is no more information found on her.

Producer AHN PAN-SEOK (안판석), born in 1961, is a prolific and acclaimed K-Drama producer and co-CEO of K-Drama production power house Drama House (드라마하우스). In his work, he usually tackles in dark tones and meticulous camera work the hidden side of the social texture that makes up South Korea as a society like the hypocrisy and corruption of the upper class, (forbidden by law) affairs or workplace harassment.

Ahn graduated in English Language and Literature from Sejong University [세종대학교] and started his career in K-Drama production at MBC’s production division in 1987. He made his debut as production director (“PD”) in 1994 with the 163 episode-long weekend drama Partner (짝) (1994-1998). Apart from a little stint at SBS with daily drama A Problem at My Younger Brother’s House (흥부네 박터졌네) in 2003-2004, he continued producing for MBC until 2007 with his last drama being the critically acclaimed Behind The White Tower (하얀 거탑 / 하얀거탑), for which he received his first ‘Best Director’ award at the Baeksang Arts Awards. In the same year, he also became the co-CEO of production company Drama House, a subsidary of JoongAng Group (중앙그룹) that is also JTBC’s parent company.

After a 5-year hiatus, he took up producing dramas again; all under his company Drama House. He started in 2012 with How Long I’ve Kissed (아내의 자격), one of the first dramas for newly launched cable channel JTBC about a married woman starting having an affair, disaster drama The End of the World (세계의 끝) in 2013 and Secret Love Affair/Secret Affair (밀회) in 2014. It is also Secret Love Affair, starring Yoo Ah-in and Kim Hee-ae, that brought Ahn and his dark and contrasted camera-work to the limelight for international K-Drama watchers. Heard It Through the Grapevine (풍문으로 들었소) followed a year later, produced for SBS. For both of these dramas he, again, earned the ‘Best Director’ award at the Baeksang Arts Awards. Three years later, he produced Something in the Rain (밥 잘 사주는 예쁜 누나) for JTBC and was nominated for the ‘Best Director’ award at the Asian Television Awards.

Read on with this interview (in Korean) 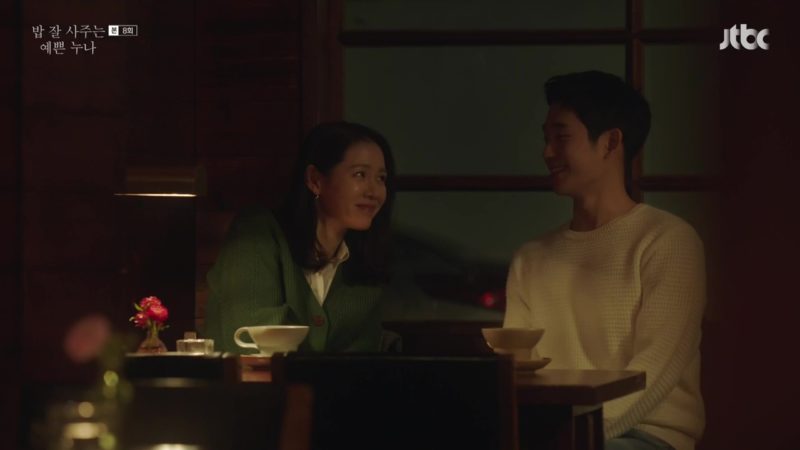 Son Ye-jin “is a one-of-a-kind actress”, states Ahn Pan-seok in an interview with Ilgan Sports and translated into English by Soompi, and continues: “She has a positive energy. In order to capture the viewers’ attention, an actor’s presence alone needs to be powerful, and she is an actress who has that kind of power. She is been able to bring to life every production in which she has appeared. […] That’s why, from the very beginning, I thought that there was no one else for the leading role of ‘Pretty Noona’ but Son Ye-jin. I only contact one person [for the role] and it worked out.”

For Jung Hae-in, Ahn states in the same interview: “I casted him after watching three clips [of his acting]. His acting was so good. I could only see his acting and not his face. He himself has no intention of letting his talents go to waste by being [seen as just] a pretty boy. He wants to be a good actor. He’s an actor whom you can trust.”

INSPIRATION FOR THE TITLE

“I was surfing the internet one day when I came across the phrase ‘Noona who buys me food,'” explains Ahn at the press conference for the drama — as Romantic tv reveals– and continues: “It was from an interview about a very famous star couple that got married after using that phrase. I though it was really witty.” In fact, this is what Song Hye-kyo said in an interview with W Korea magazine’s March 2017 issue,  when talking about her Descendants of the Sun co-star Song Joong-ki and another good friend, Yoo Ah-in, prior to her engagement with Song, who’s now her husband. 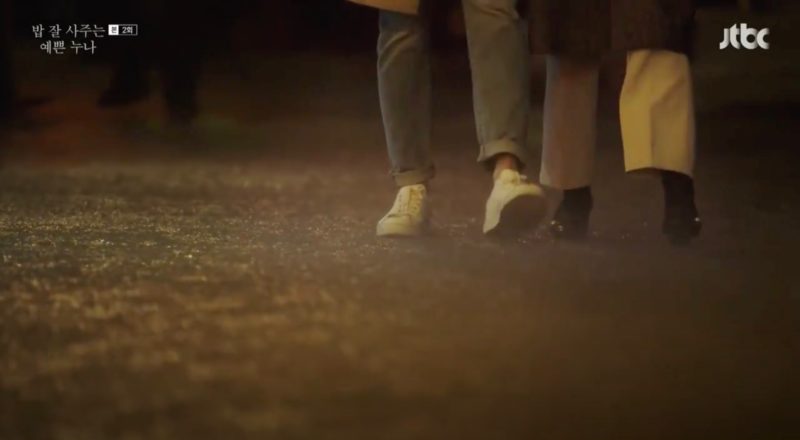 Something in the Rain brought two things that made it stand out for me:
The silences.
The long sequences where people and things and footsteps, embraces, and gazes could just be;
without words, and sometimes even without music.

In short: the landscape shown in Something in the Rain is as close as it can get to the actual landscape of a real person who’d be living in Seongnam, working in Sangam and has two favorite neighborhoods to hang out at: Hongdae and Cheongunhyoja.
— Marion KDL

Search Something in the Rain/Pretty Noona Who Buys Me Food/Pretty Sister Who Treats Me to Meals (밥 잘 사주는 예쁜 누나) (JTBC, 2018) on KDL for a visual look of all locations.

This overview will be updated when new locations are added.
Last update: 12/07/2020

It can be easily said that Something in the Rain was one of the most popular and lauded K-Dramas of 2018. To date, the drama has won 10 awards: