Has there ever been a drama you’d decided not to follow for whatever reason –unattractive storyline, not your preferred genre, unfamiliar cast members etc– but one random, curious watch sends you so quickly down a spiral before you even realize it? That, ladies and gents, is how I (Mich) went back to watching Memorials.

“The feel of the drama just doesn’t vibe with me,” I told Marion after she’d asked if I continued watching — and it’s true! It didn’t. But what can I say? I’m a sucker for cutesy couples like GongSera (yes, I even have a couple name for them!), and their chemistry was what drew me back in — from episode 10, no less.

That’s probably what’s fascinating about watching dramas, be it Korean or that of other countries: though one may not vibe with you instantly, there are always be others that will. And if you give that one a chance, it just might surprise you with something that seals the deal. Would love to hear your experience with such a drama if you have one — share it with us in the comments!

One of my (Mich) highlights this past month was seeing how locations from past shows are given new leases of life. Imagine my surprise when I realized that the space seen as the metal craftwork shop in Flower of Evil is the same one as the cafe in the 2018 dating/matchmaking show Cafe Amor (선다방)! And, ’twas a pity that I had missed out on seeing this place for myself on my last trip, as I had not gone down that part of Palpan-gil. Sigh. So close, yet so far. Nevertheless, it’s still pretty cool to see on-screen, though it now exists for a slightly… eerie purpose.

Osan High School is probably best known to most as the school in the 2017 drama The Liar and His Lover. So it came to quite a surprise to find out that this more than 100-year old school was already the main location of the 2003 drama Sang Doo! Let’s Go to School.

The overpass leading to Noksapyeong (Yongsan-gu Office) Station got quite some hype this year through Itaewon Class. It’s a pity, though, that the drama didn’t pay homage to this station in showing off its beautiful interior; the way it is known and holds its own as one of the most important subway stations in K-Dramaland since 2003 at least. 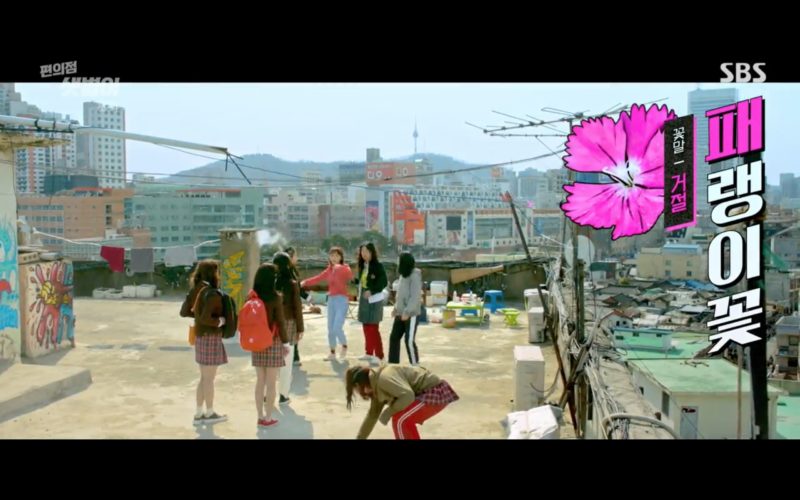 It’s nice to see that Backstreet Rookie‘s Saet-byul loves flowers enough to know their meanings — and to be honest, that’s mostly why we’re still watching it! Thanks to her, we’ve uncovered new ones like China Pink, Ivy, Wild Rose, Pink Rose, Hibiscus, Aconitum/Wolf’s Bane… check out our ongoing blogpost for more.

As much as South Koreans seem to like their big chain supermarkets and convenience store franchises, there’s something about the local neighborhood grocery stores –also called ‘super’ (슈퍼/수퍼) or ‘mart’ (마트)– that keeps them going back. Maybe it’s the convenience of having it just down the street, if one’s house is too far from the main thoroughfare; it could also be that the fruits and vegetables here don’t cost as much as those at the chains; or, maybe it’s the feeling of having that sweet, sometimes sassy halmeoni fussing about like a real grandmother would.

Aside from getting daily necessities, these shops could also serve as an oasis for some, a place of solace or refuge for others. In K-Dramaland, characters often gather outside to catch their breath, grab a drink, or sit for a chat. Children like hanging around the neighborhood marts too; if they’re lucky, there would be little video game consoles for them to play with.

Interestingly, not much is written about these mom-and-pop stores, but there are those who are preserving this part of everyday life for posterity. It’s lovely to read about how artist Lee Me-kyeoung/Lee Mekyeoung (이미경) has been sketching these quaint shops in all shapes and sizes for over 20 years as part of her ongoing series A small store (구멍가게) (view more at her website). There was also heartening news that Seoul city was looking to revive disappearing local stores, though with the onset of the COVID-19 pandemic, things may not seem too promising. But, with the sentimental value of these establishments, and the jeong (정/情 — affection) Koreans have for them, hopefully there will still be more than a handful that continue to serve a new generation of customers in years to come. — Mich KDL (P.S: Be sure to #supportlocal wherever you are!)

We’ll also be taking a 2-week break for the summer from mid to end-August, but feel free to continue sending in your locations and leaving comments during this time!