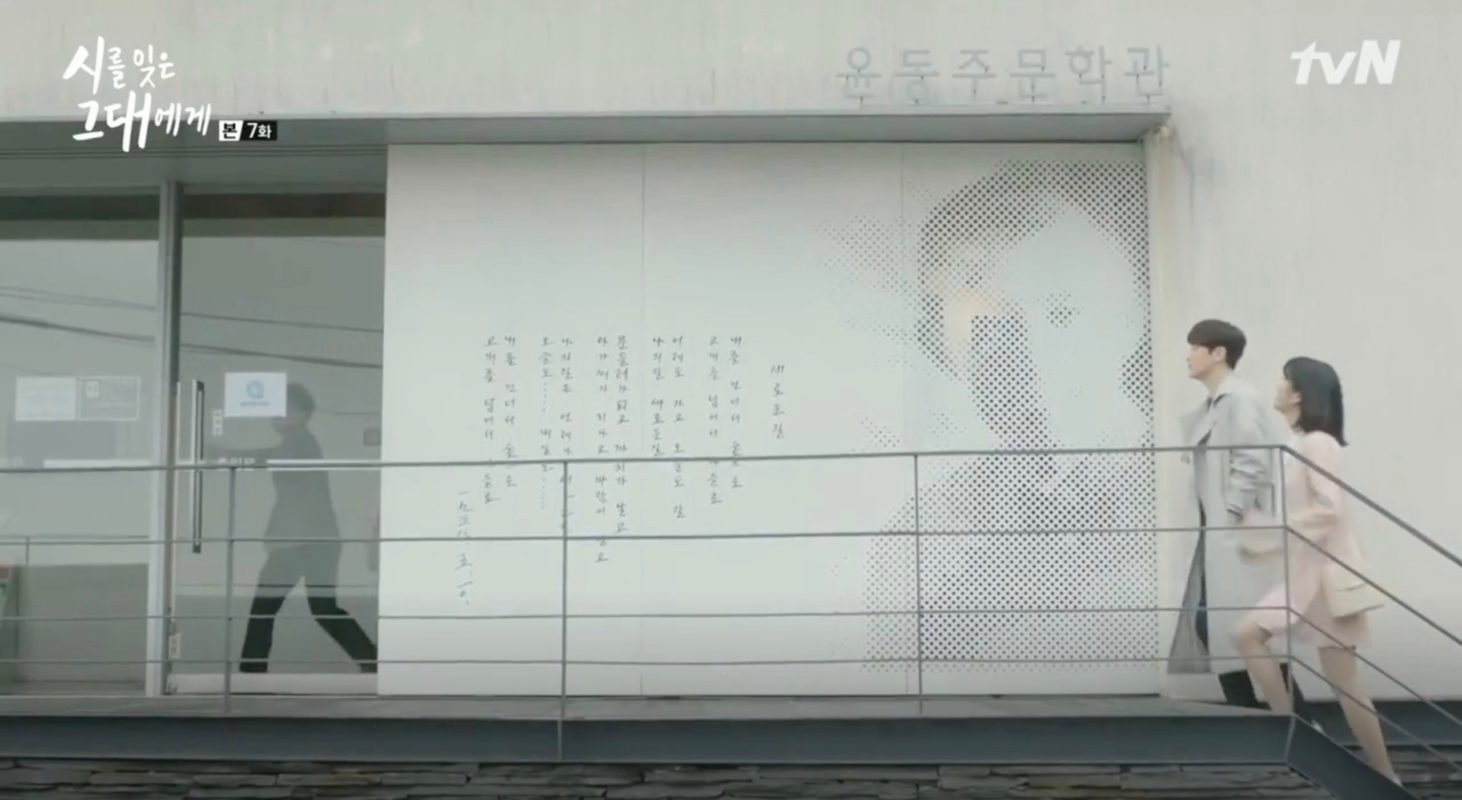 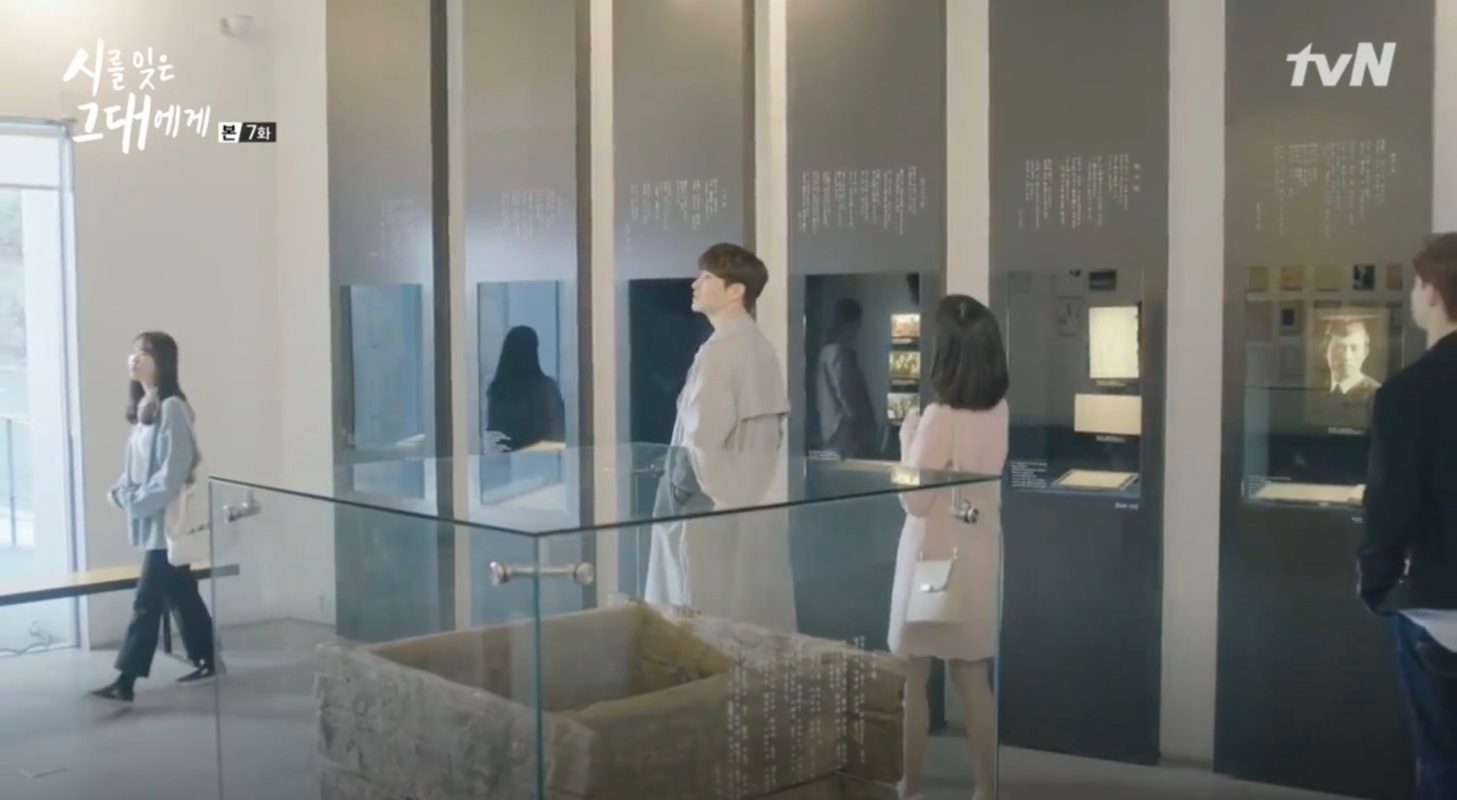 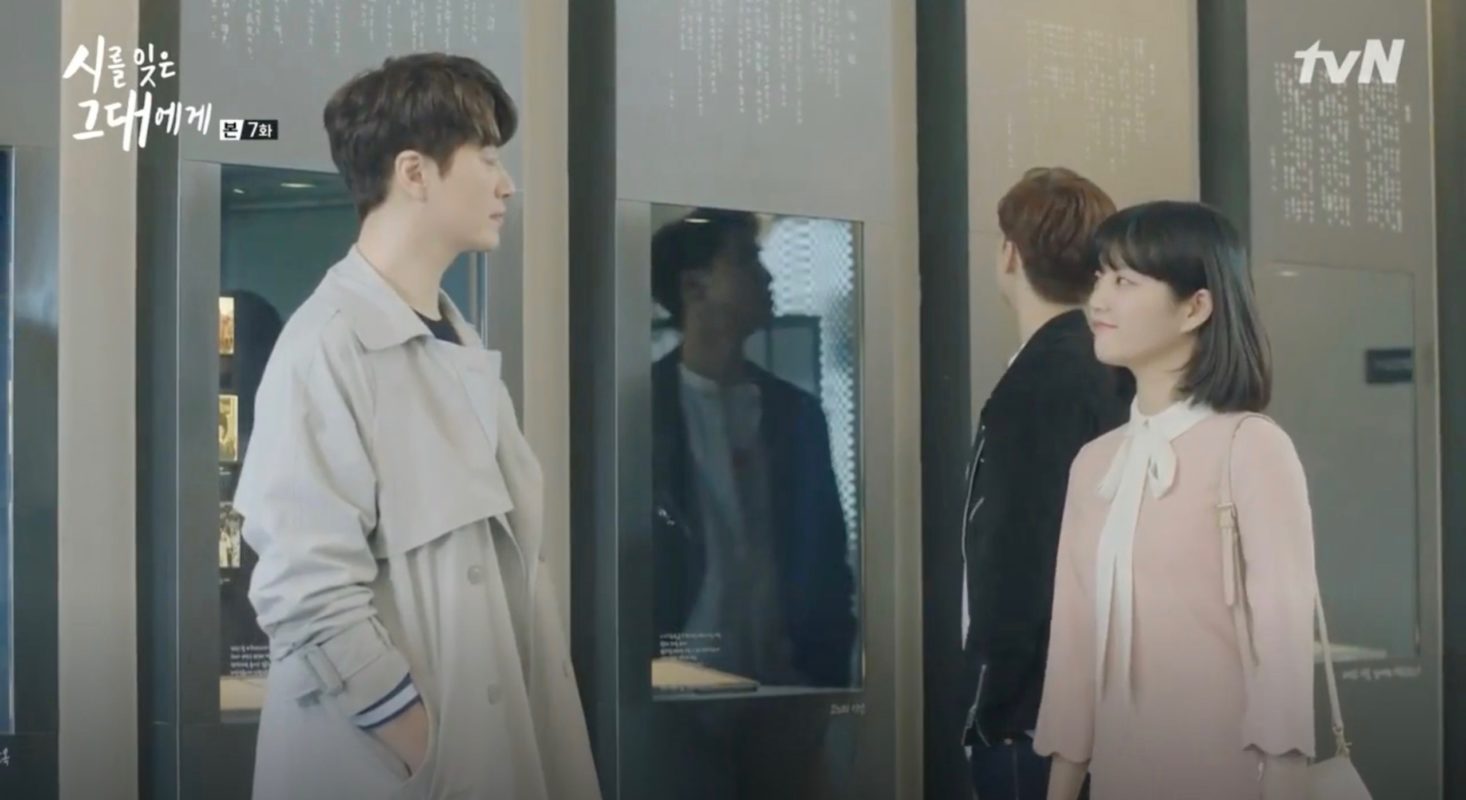 In episode 7 of A Poem A Day / You Who Forgot Poetry (시를 잊은 그대에게) (tvN, 2018), Ye Jae-wook (Lee Joon-hyuk) takes Woo Bo-young (Lee Yoo-bi) and Shin Min-ho (Jang Dong-yoon) to the museum on their way to dinner as a treat. He had looked up the museum after enjoying a poem by Yoon Dong-ju that Bo-young had sent him the previous night. While at the museum, a jealous Min-ho attempts to embarrass Bo-young about her past behaviour and destroy the relationship that is growing between her and Je-wook. Min-ho grows frustrated as his attempts are continuously thwarted as Je-wook just finds these things about Bo-young adorable.

Yoon Dong-Ju Literature Museum/Literary Museum of Yoon Dong-Ju [윤동주문학관] is a small museum honoring the poet Yun Dong-ju or Yoon Dong-joo (1917-1945). Yun Dong-ju, who was born in China, is a renowned Korean lyrical poet, known particularly for his resistance poetry of Korea’s late occupation period. When he lived in Jongno and started to write his first poems, he often went to Inwang Mountain/Inwangsan where this museum was later erected in his honor. While studying in Kyoto in 1948, he was arrested by the Japanese police and charged for participating in the Korean independence movement. He died in prison at the age of 28. His poetry—centered around loneliness and despair and overcoming these—was only published posthumously in 1948, with his most notable work being Sky, Wind, Star, and Poem. “Foreword/Prelude”, seen engraved in a stone in One Poem A Day, is one of Yoon’s most famous poems. The poem recited in the drama, however, is “Jealousy” by Jung Ho-seung.

Instead of building a museum, the former Cheongun Water Pump Station that provided tap water to the Cheongun-dong highlands until its closure in 2008, was transformed into the Yun Dong-ju Literature Museum by architect Lee So-jin in June 2012. The pumping station’s old water tanks were turned into an open garden and a theater. The theatre is dark, except for a narrow ray of light that shines through a small hole in the roof, recreating the Japanese prison cell where Yu Dong-ju was imprisoned. The Museum was awarded the 2013 Prime Minister’s Award for Public Architecture and the 2014 Seoul Architectural Awards as a successful model of urban restoration.

This museum that showcases Yoon’s handwritten manuscripts and photographs is located in Seoul’s neighborhood Buam [Buam-dong/부암동] in the Jongno District [Jongno-gu/종로구], directly at the Baegak Section of the Seoul Fortress Wall. Ko Eun-Seong’s House is located not very far from here. There is also a location video filmed by a BTS fansite as this was a location previously visited by BTS member RM.

Getting here
Gyeongbokgung Station [경복궁역], Seoul Subway Line 3, Exit 3
On Foot
➜ Walk about 270m to the Gyeongbokgung station bus stop [경복궁역 정류장] and take buses 7212, 1021 and 7022 for 5 stops to ‘Entrance to Jahamun Tunnel’ [자하문터널입구.석파정].
➜ Follow the flow of the traffic and walk direction Seoul Museum [서울미술관] and cross the street just before it.
➜ Walk up Changuimun-ro 10-gil [창의문로10길], while passing in front of restaurant PREP [프렙], continue walking a quite steep one-way uphill road until you arrive at the top.
➜ Take a right into Baekseokdong-gil [백석동길] and again a left into Changuimun-ro [창의문로].
➜ Follow the road (pass under a bridge) until the museum appears on your right hand side.
or
By Bus
➜ From Gyeongbokgung station bus stop [경복궁역 정류장] (#01-1161) and take bus #1020, 7022 or 7212 for 5 stops to Jahamungogae/ Yun Dong-ju Literature Museum bus stop #01-1071 [자하문고개.윤동주문학관], which is directly across the road from the Museum.

— submitted by sianiam with directions by Mich KDL, with location additions on by sarahms
— Photo taken by © dihischu, 2013