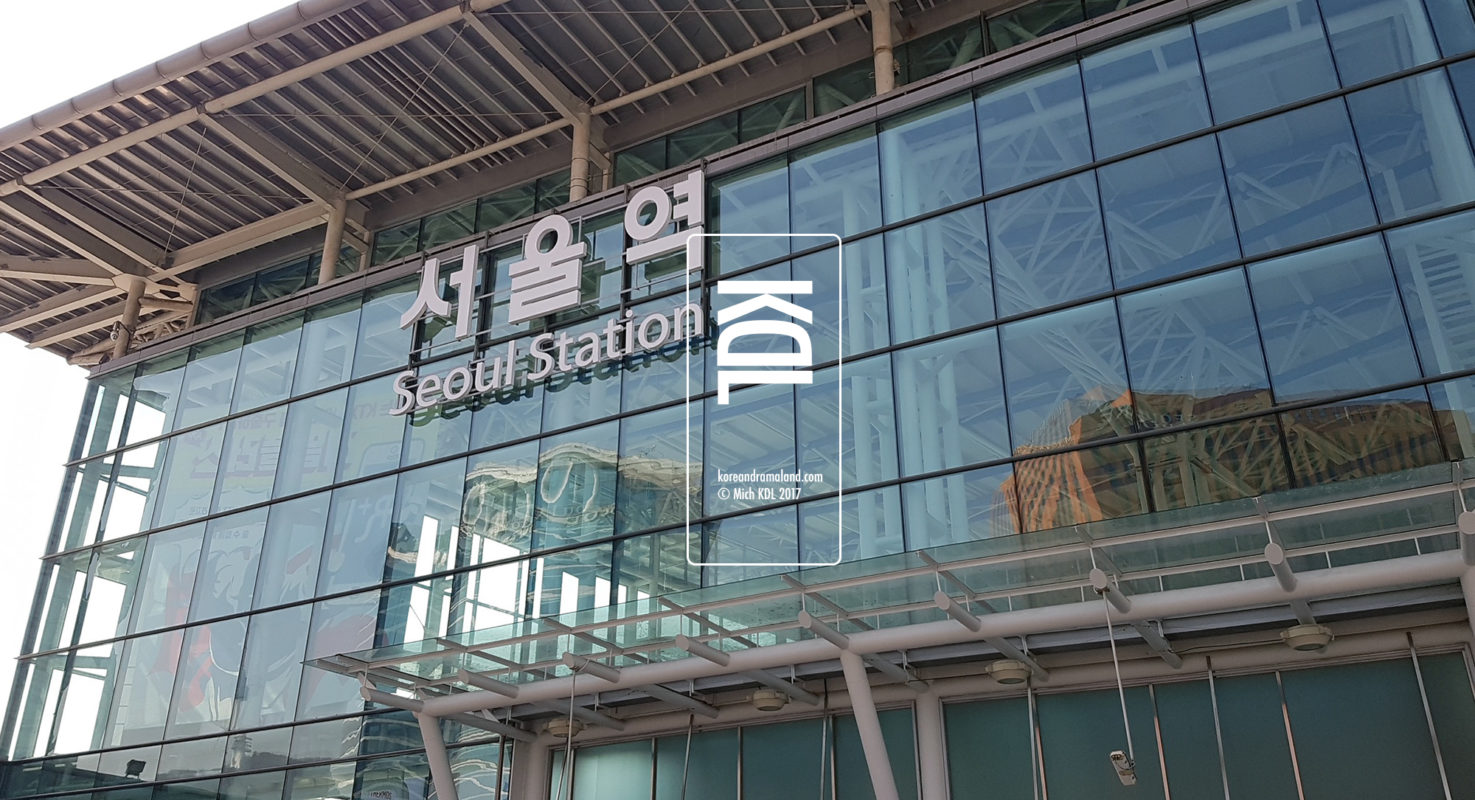 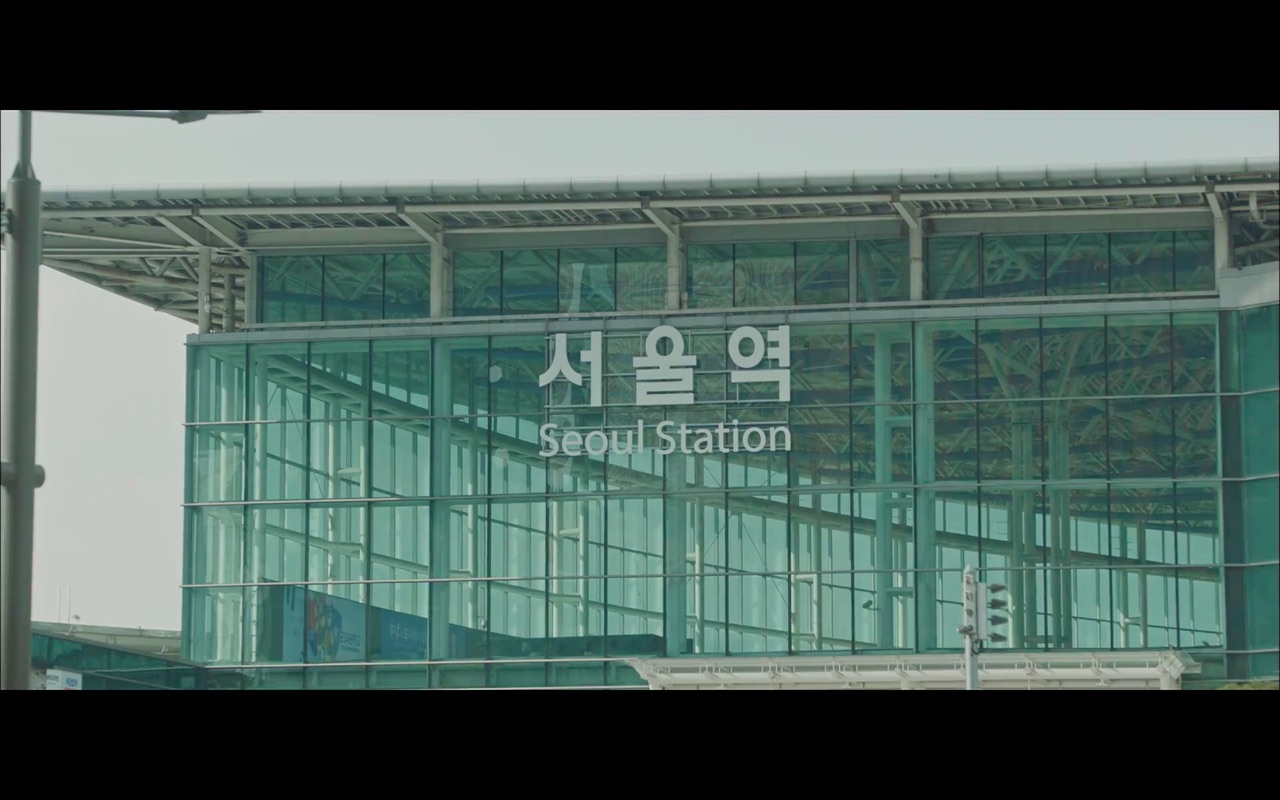 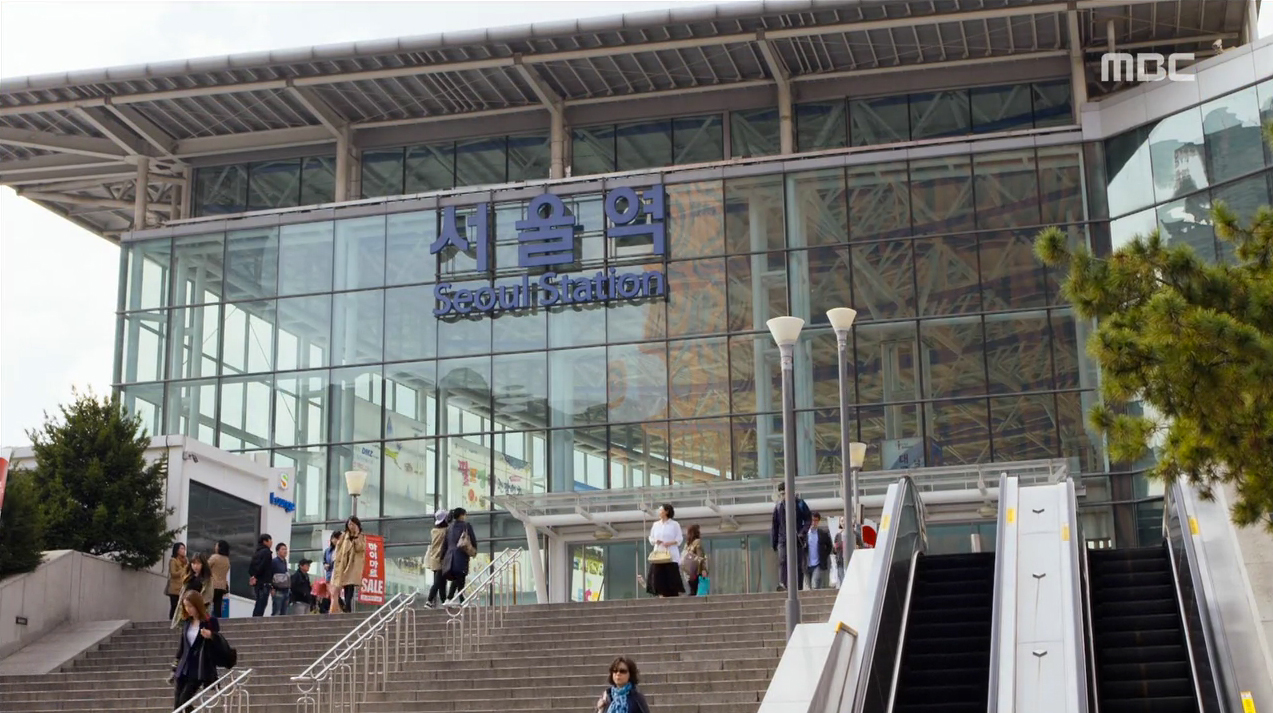 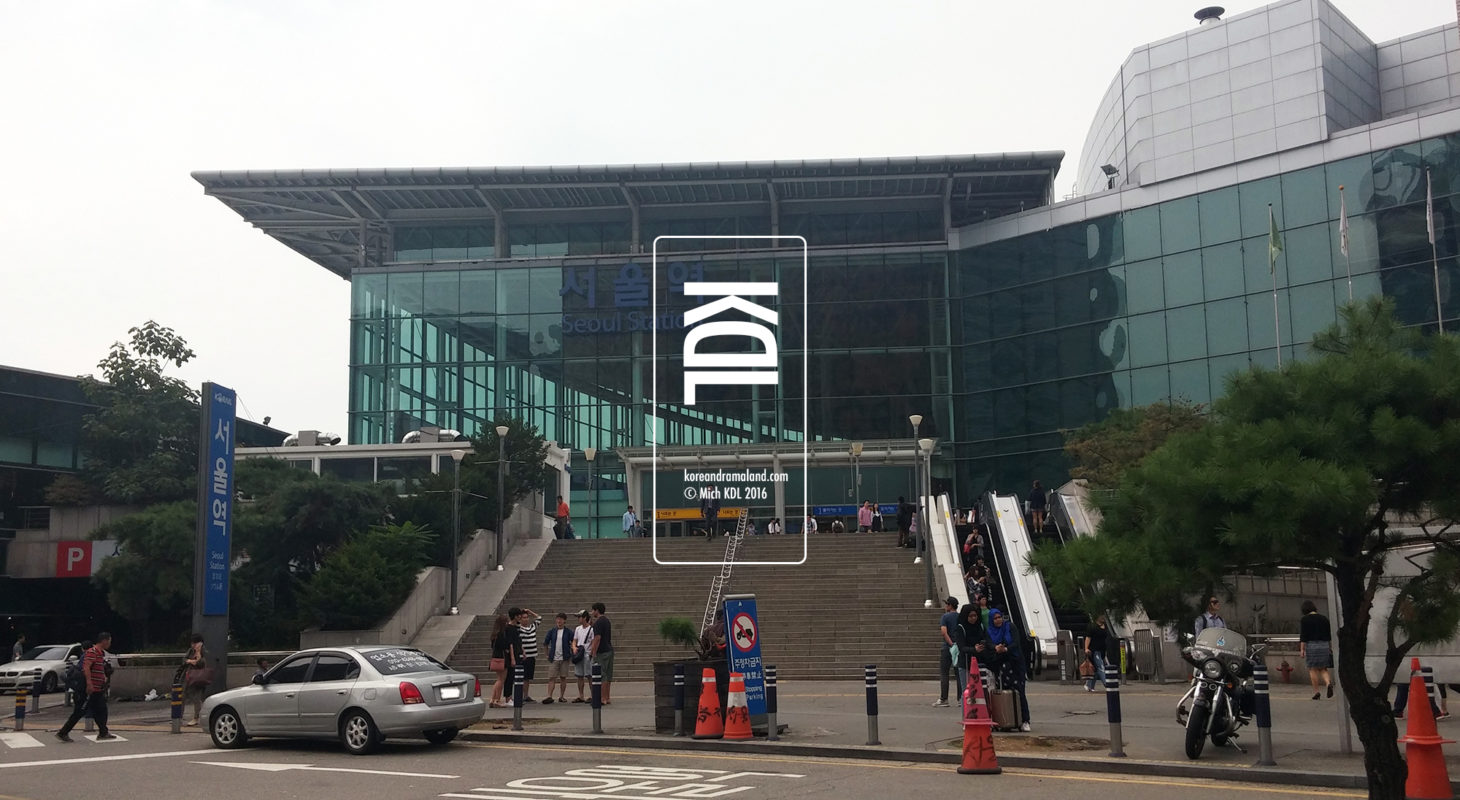 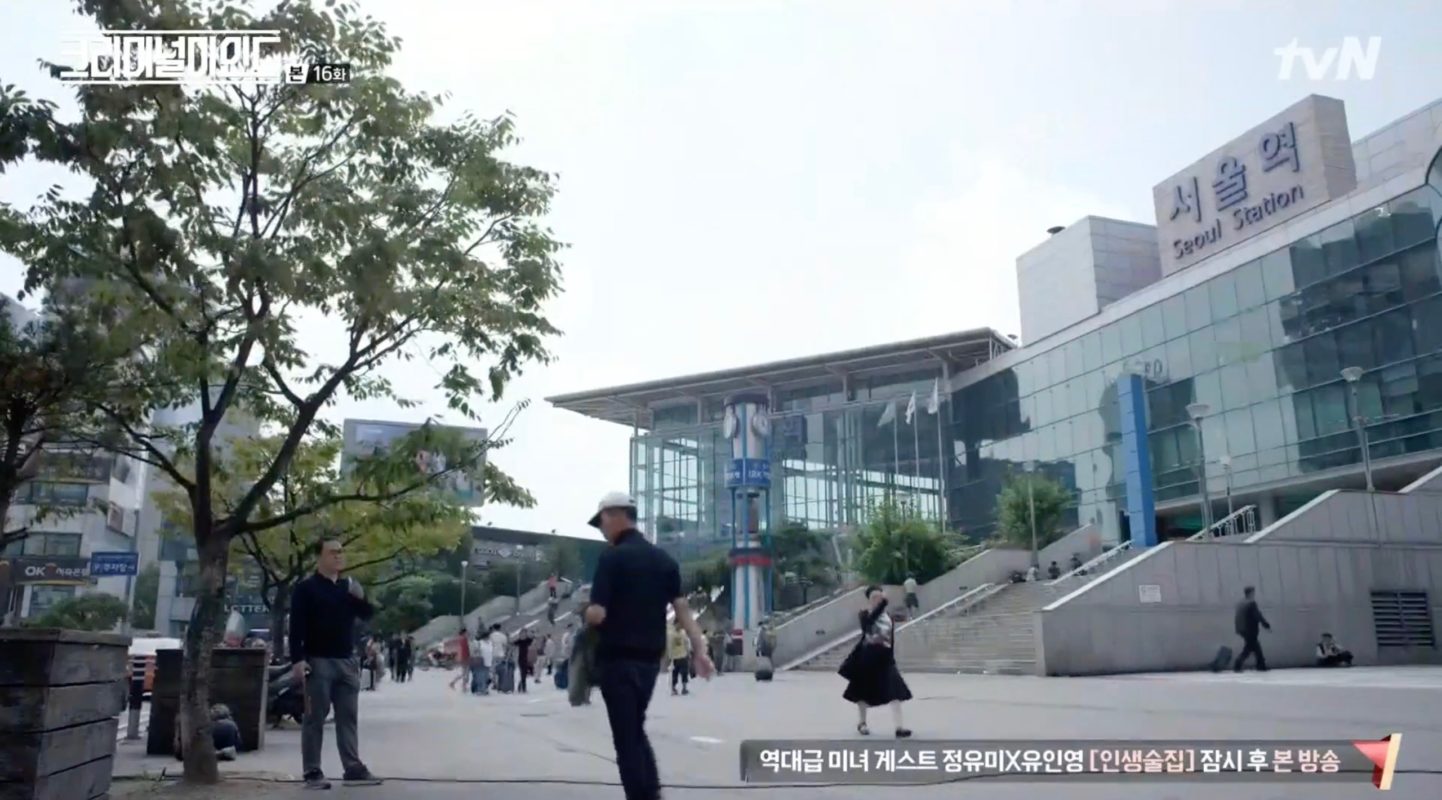 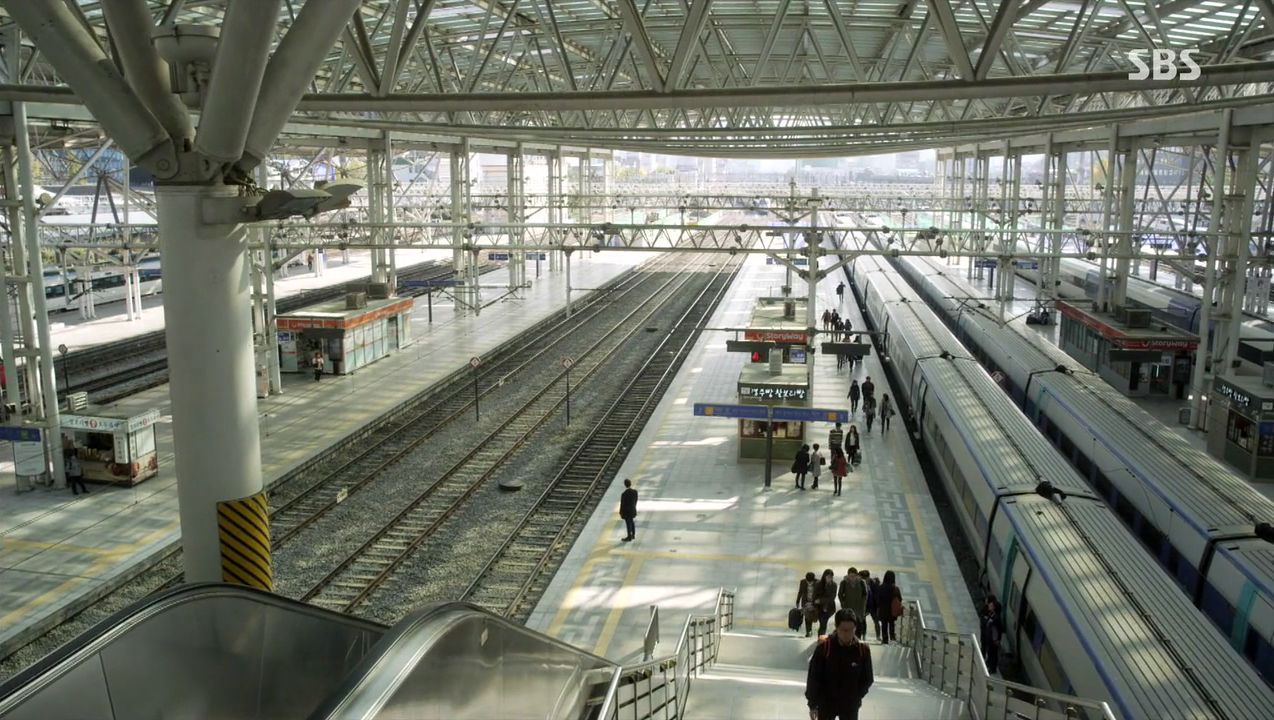 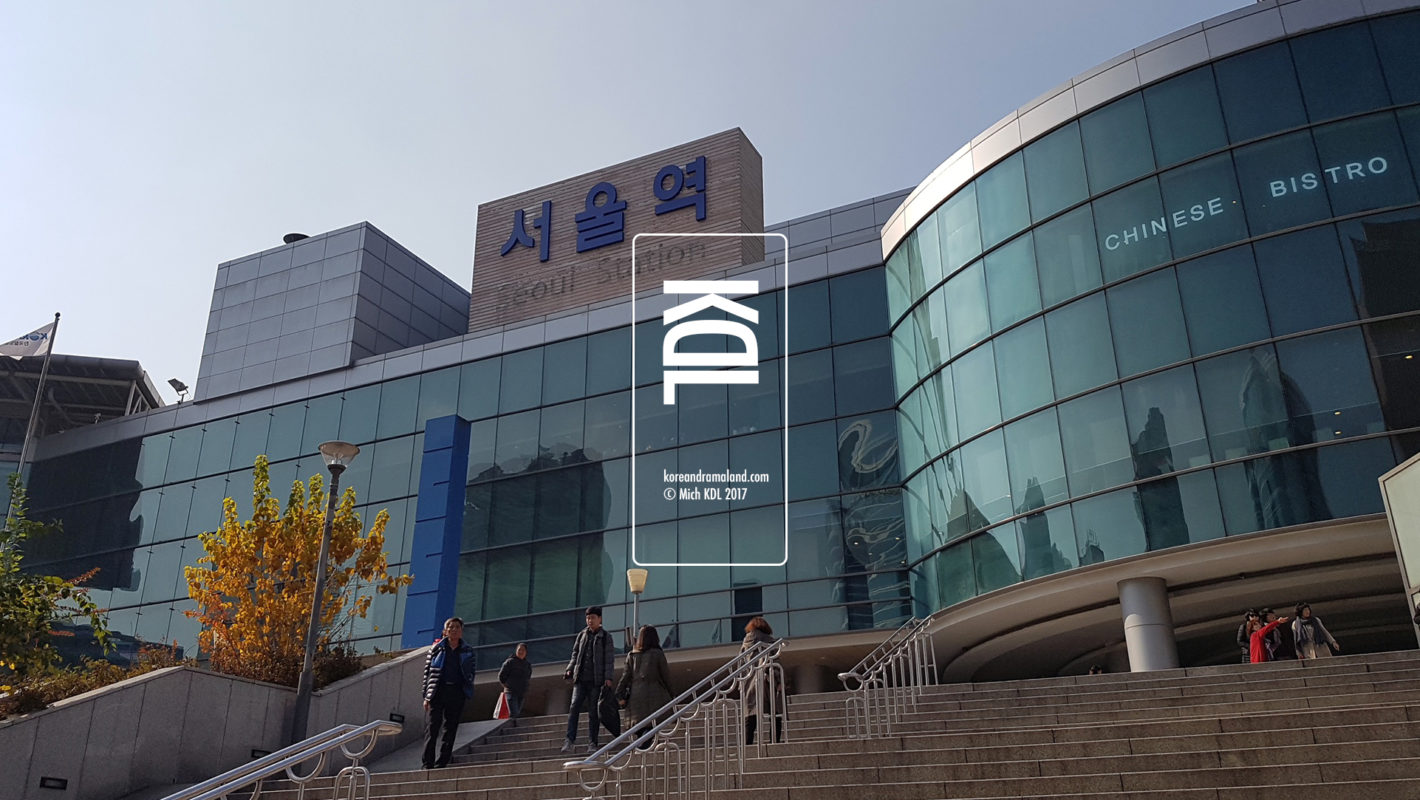 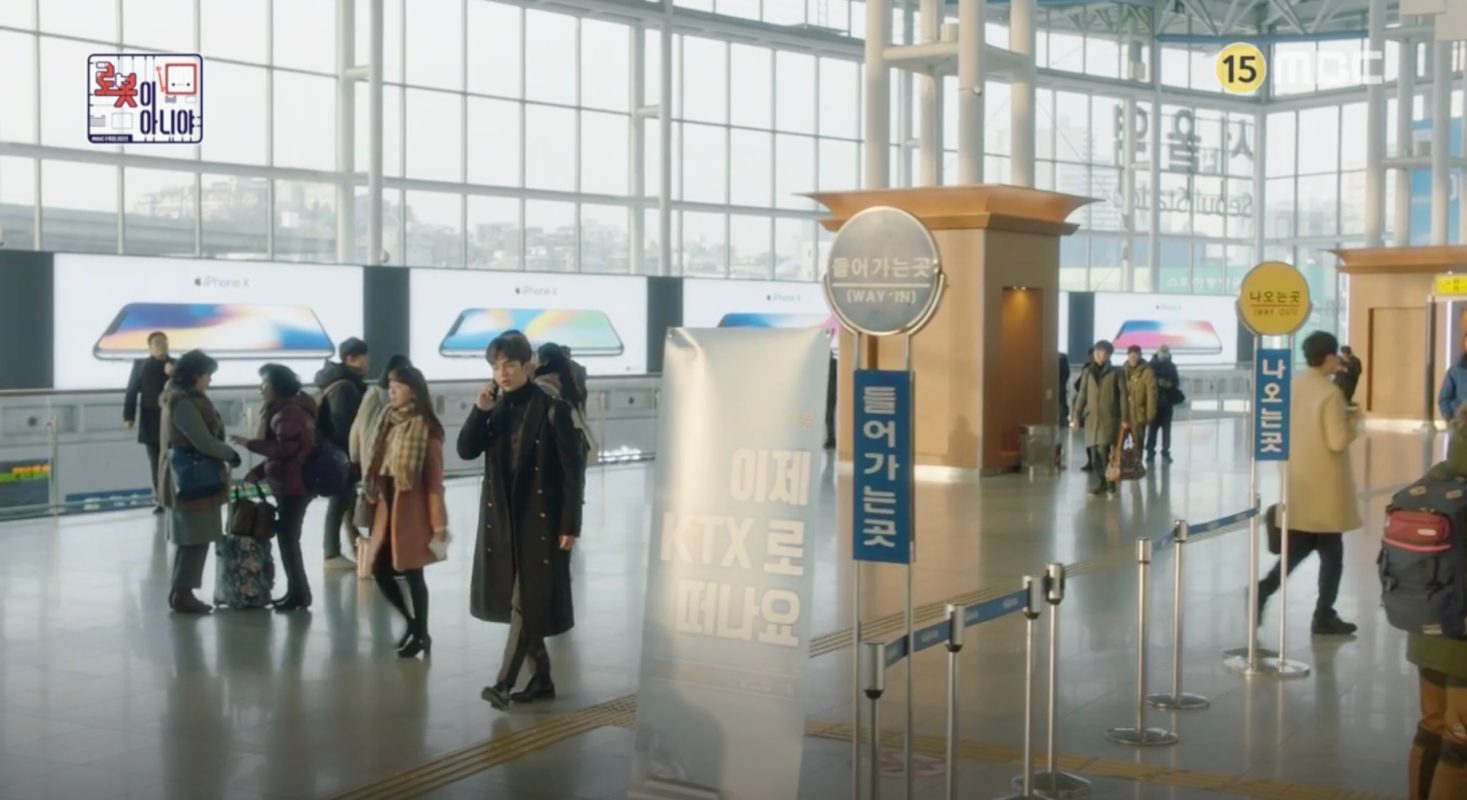 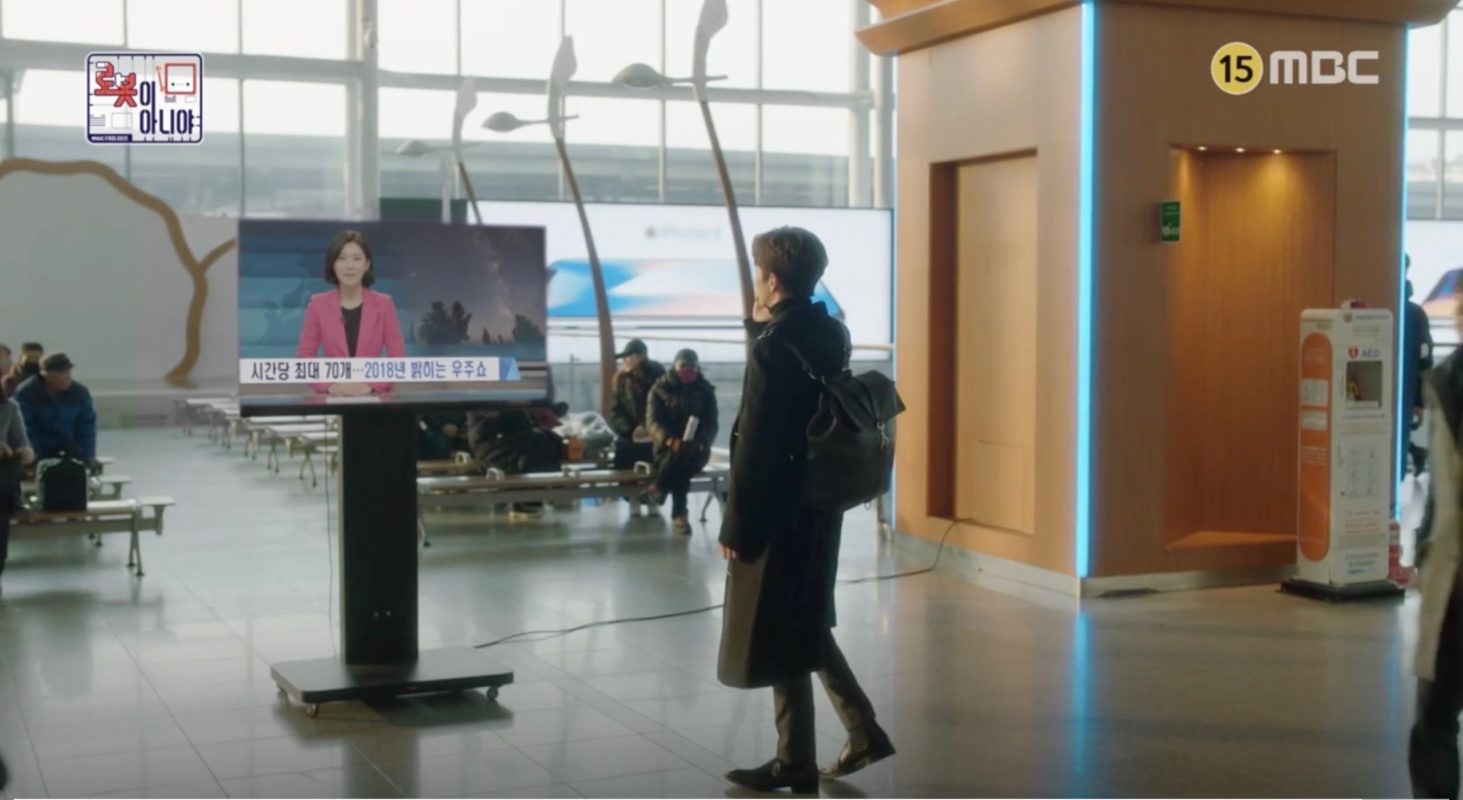 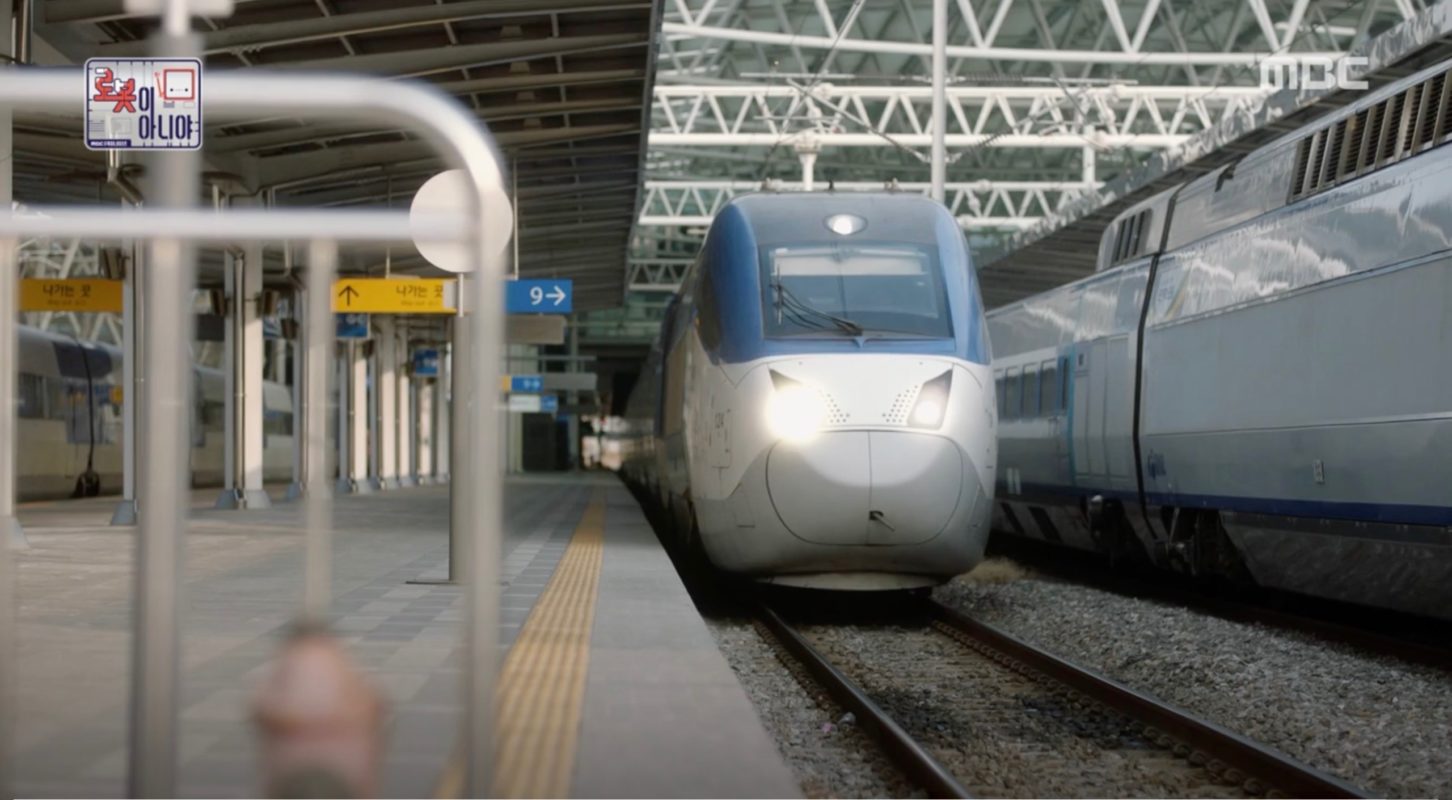 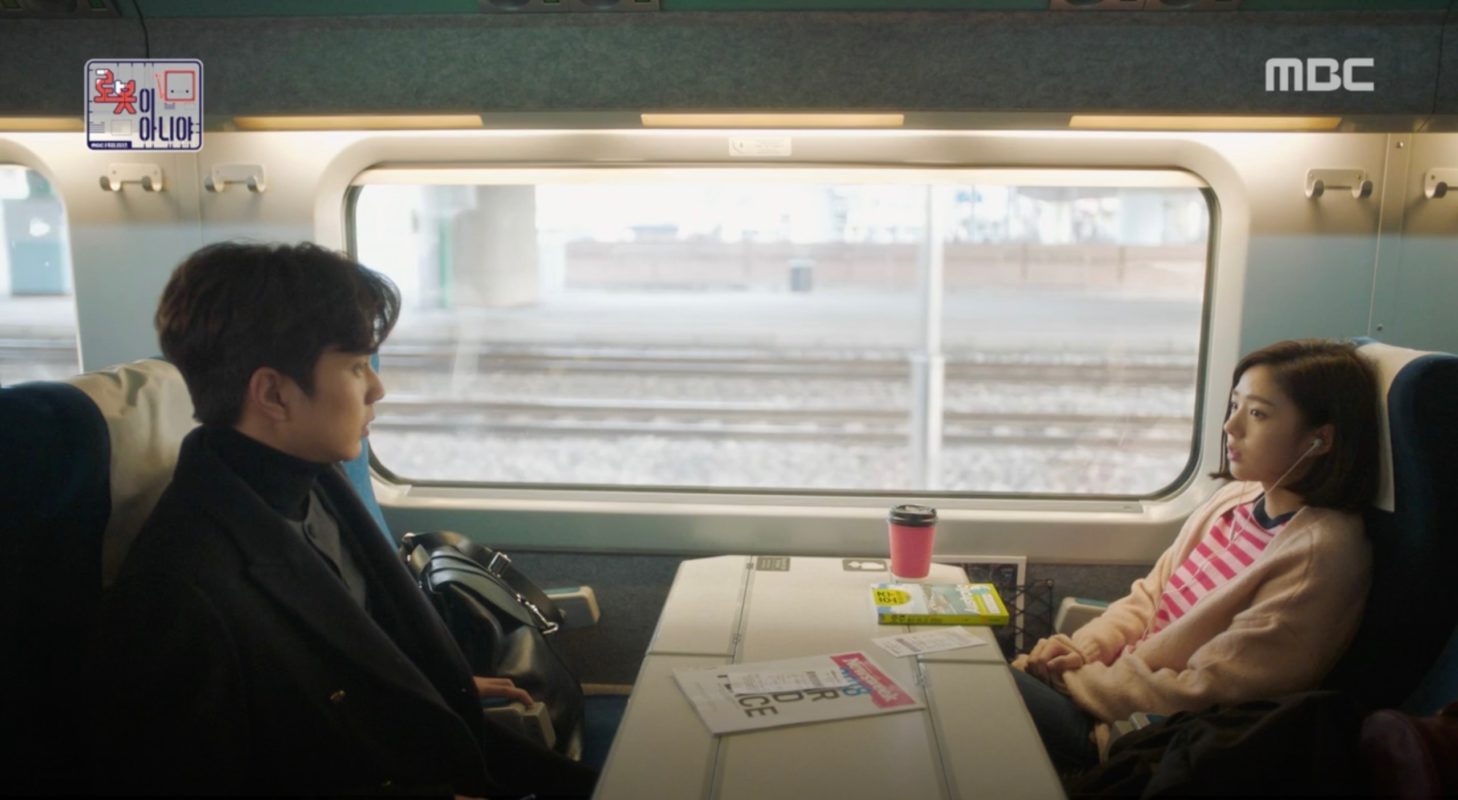 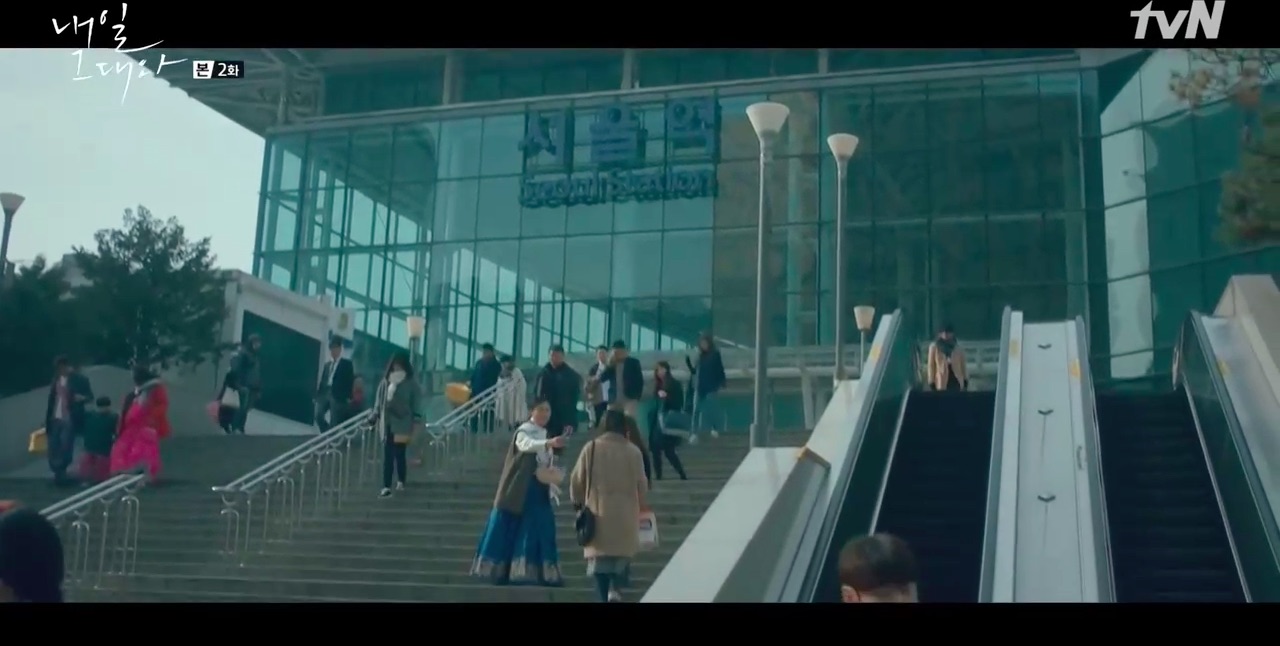 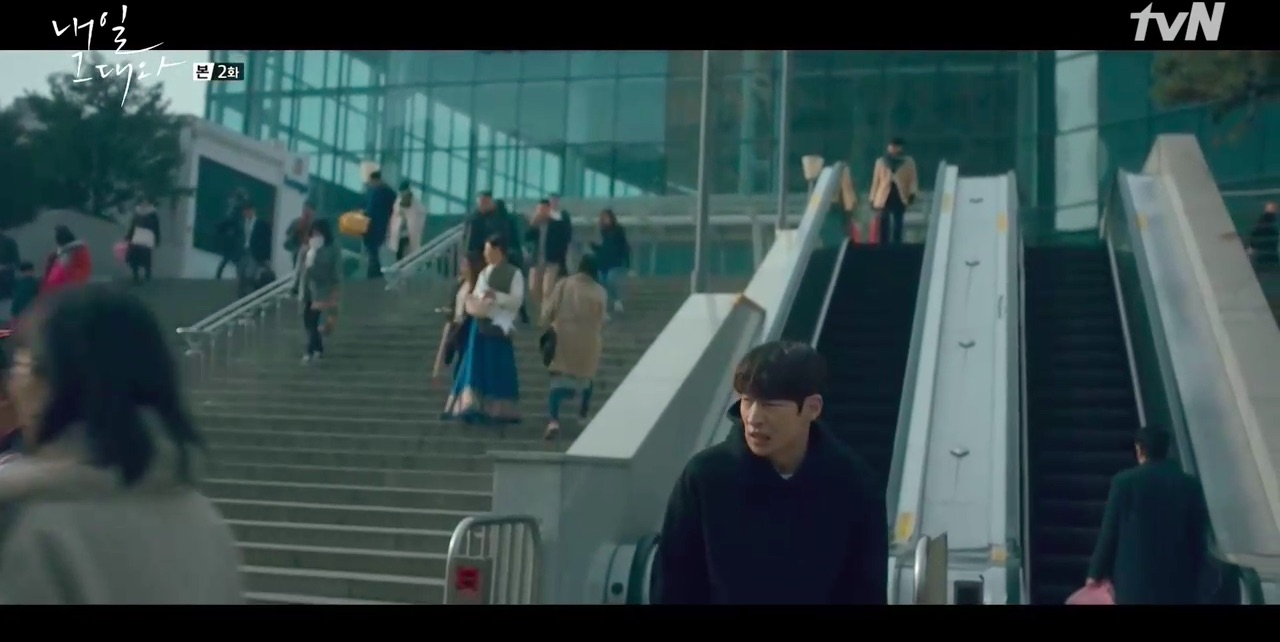 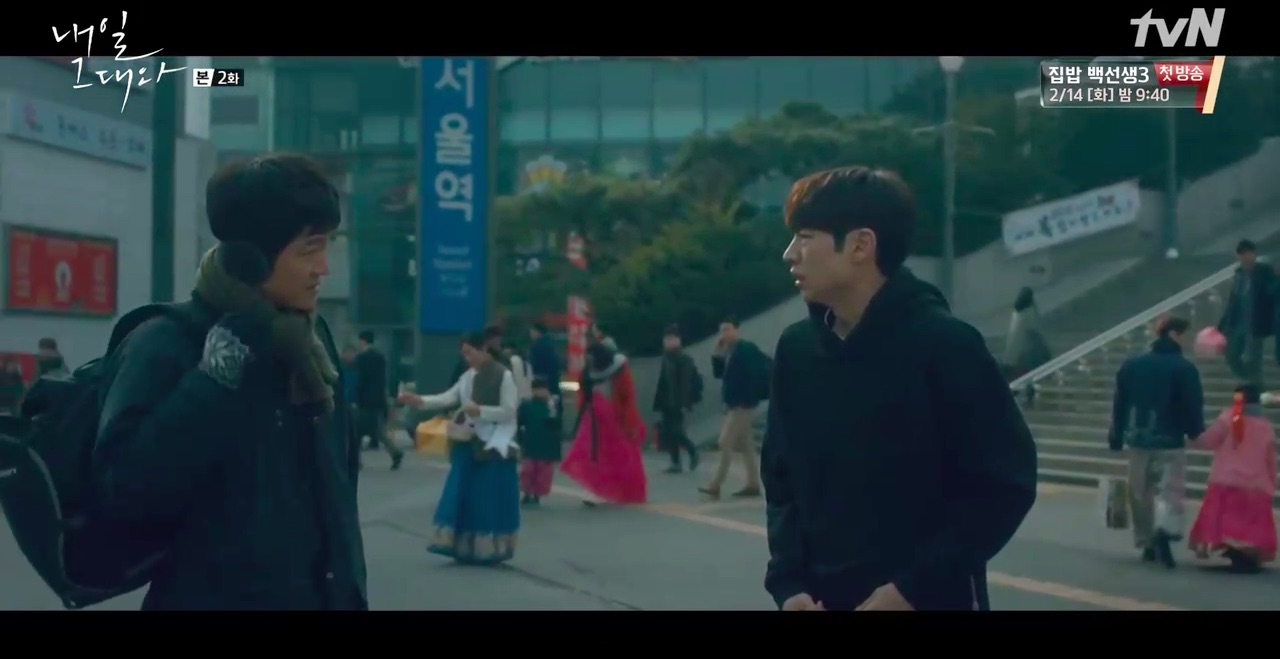 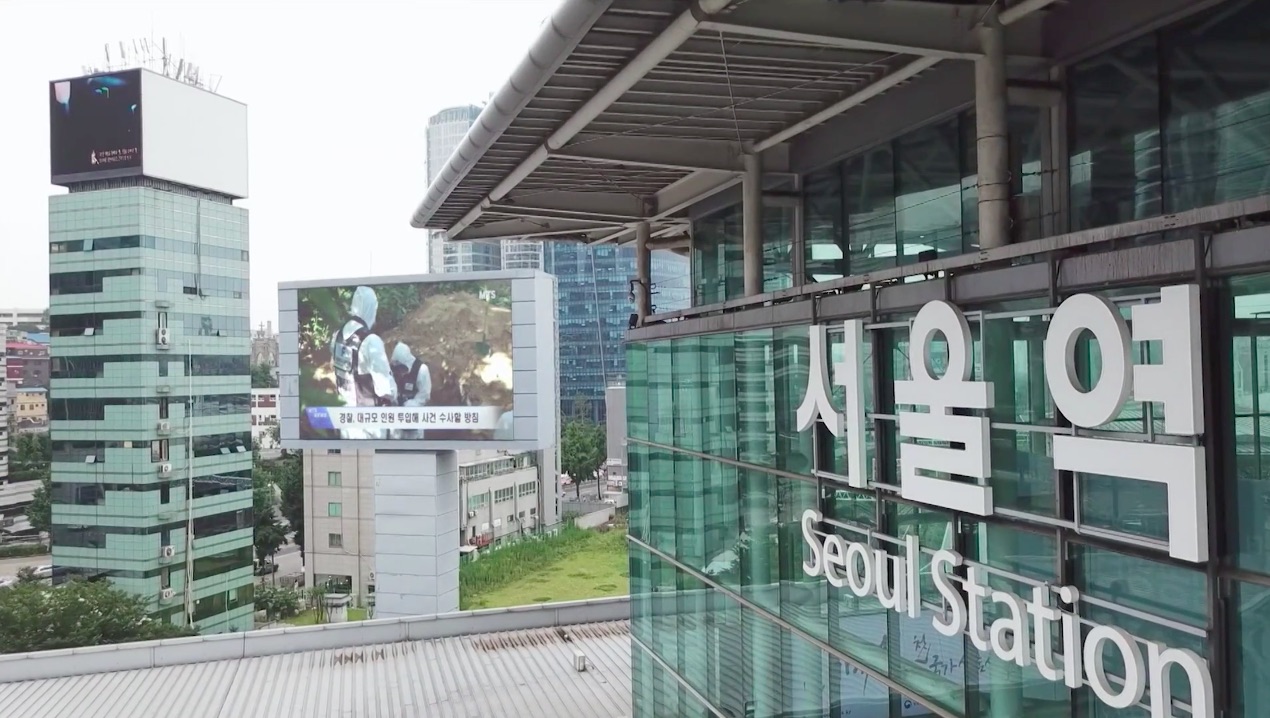 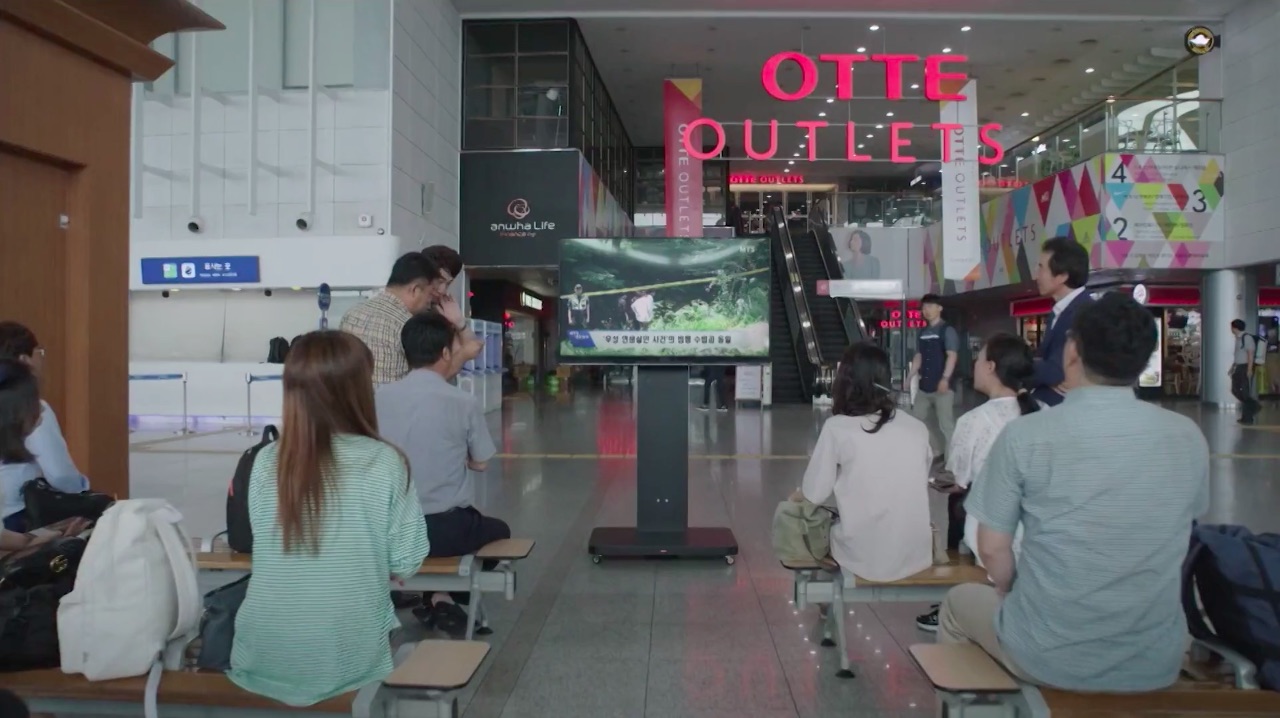 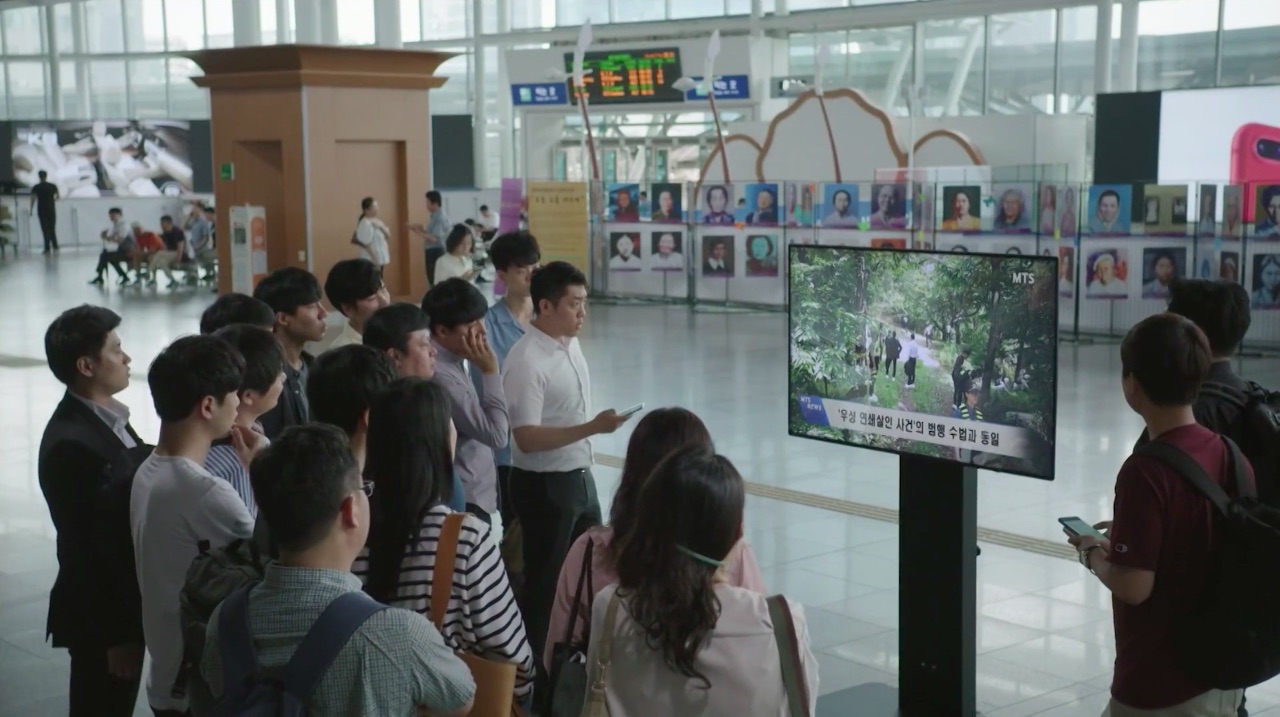 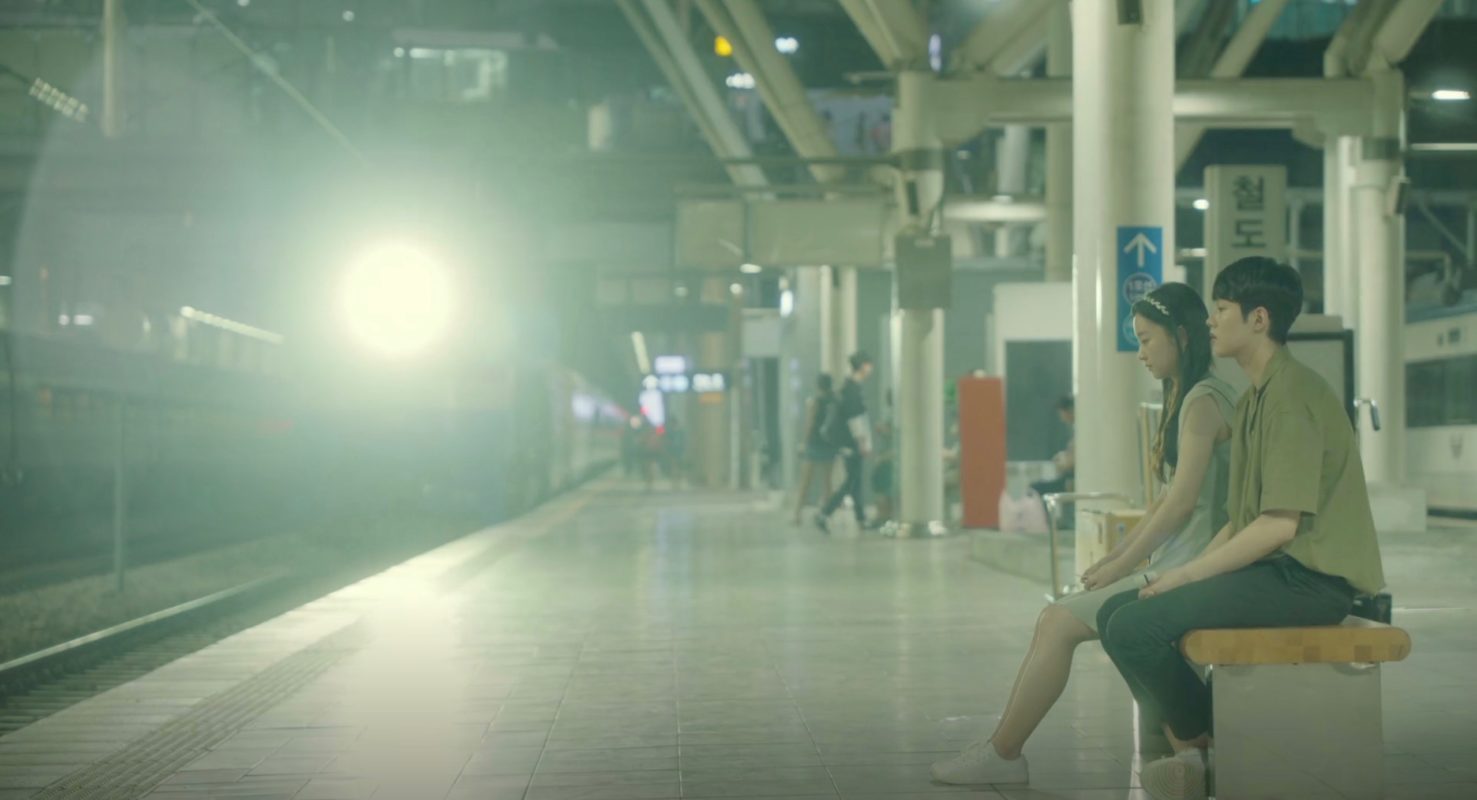 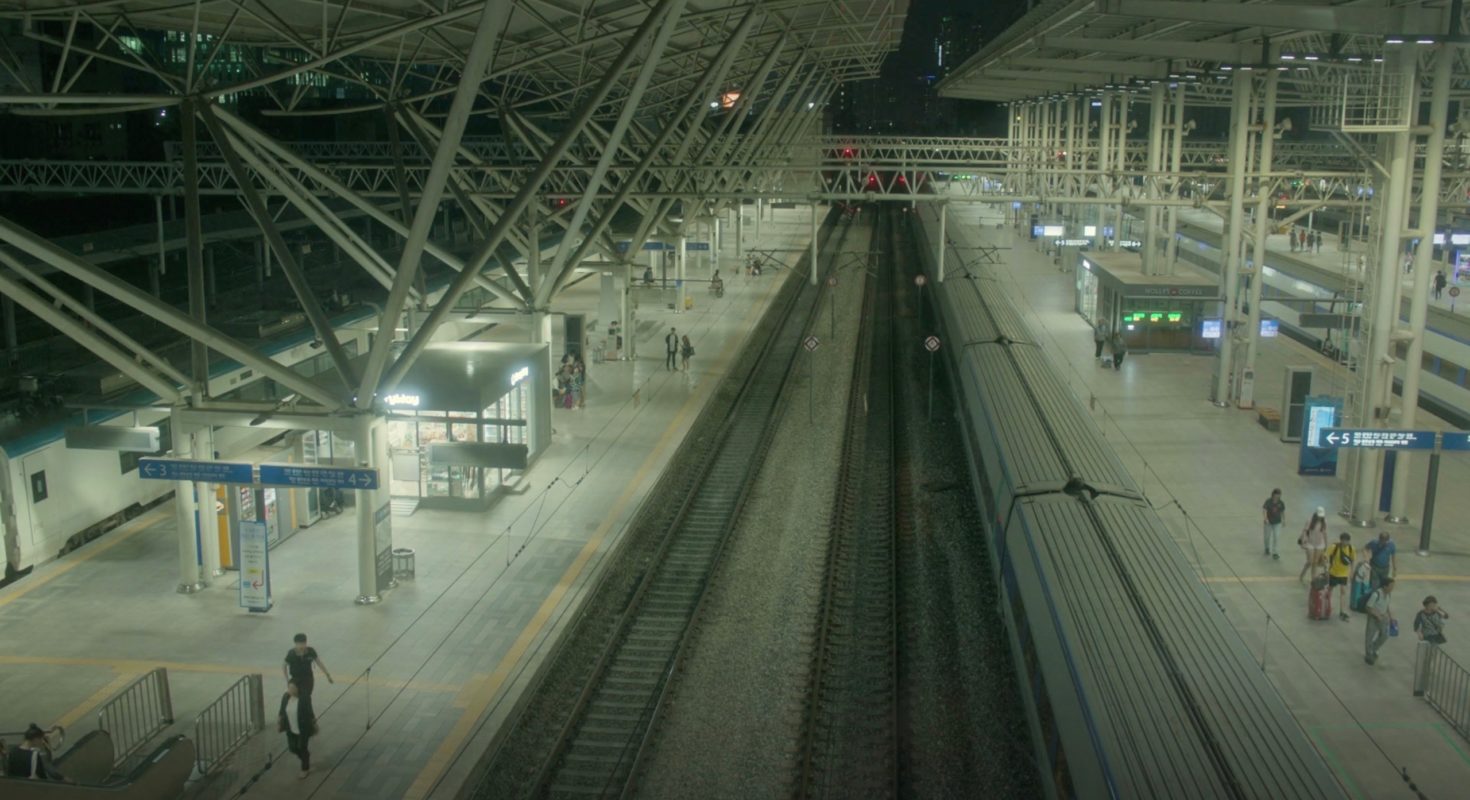 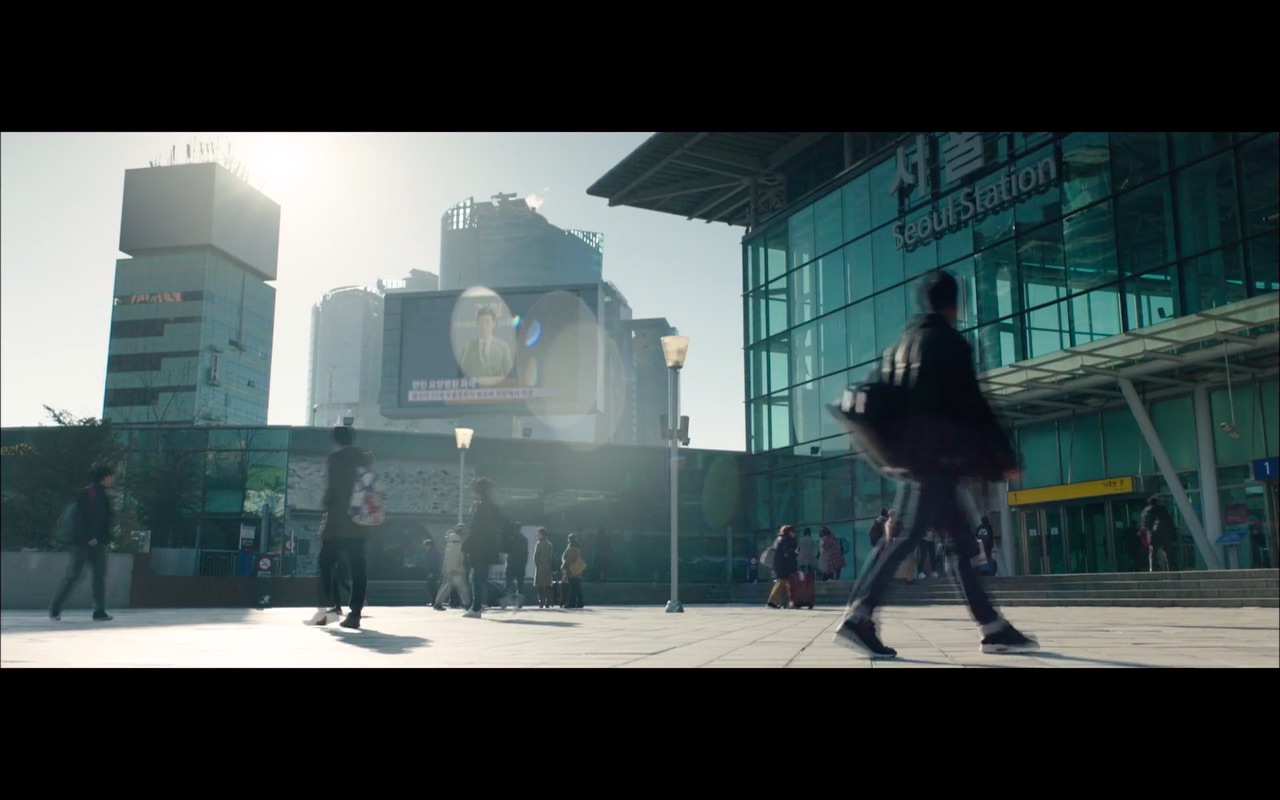 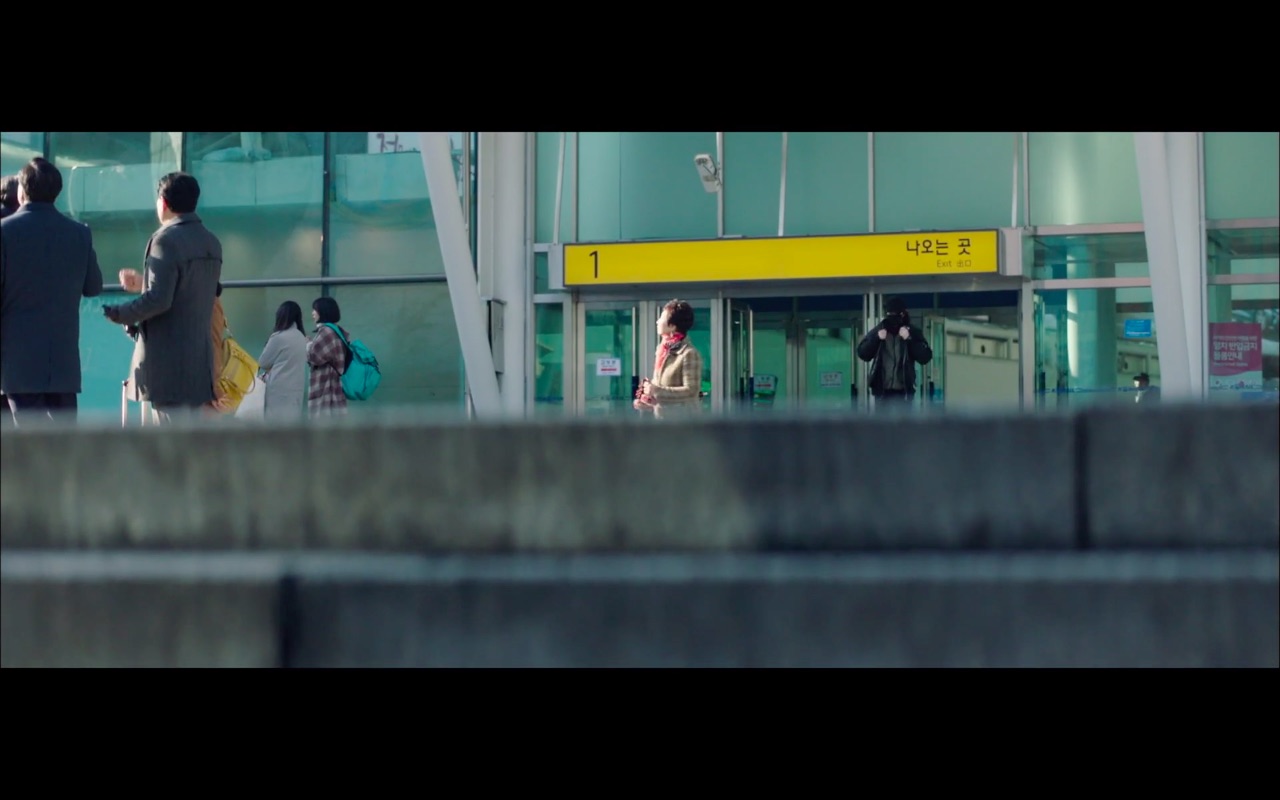 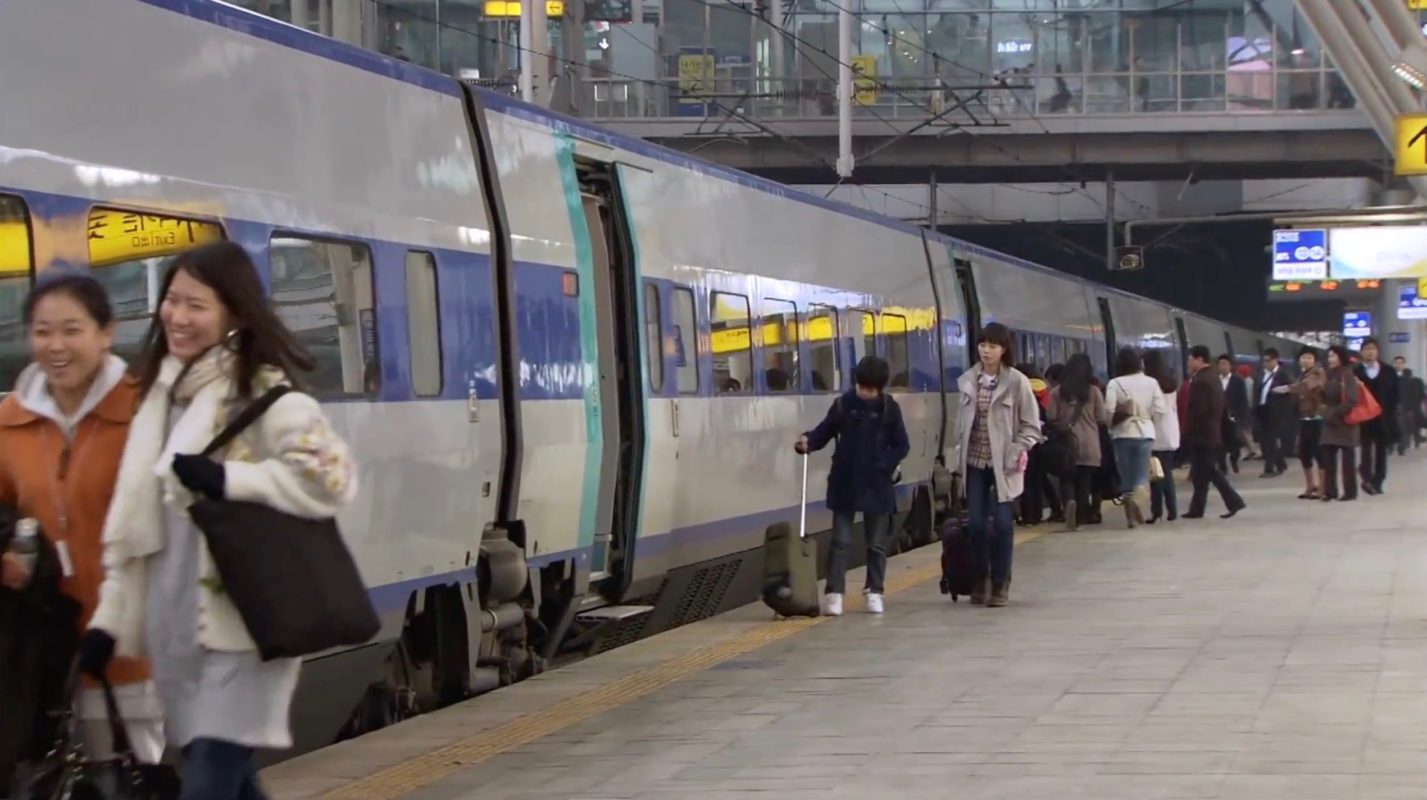 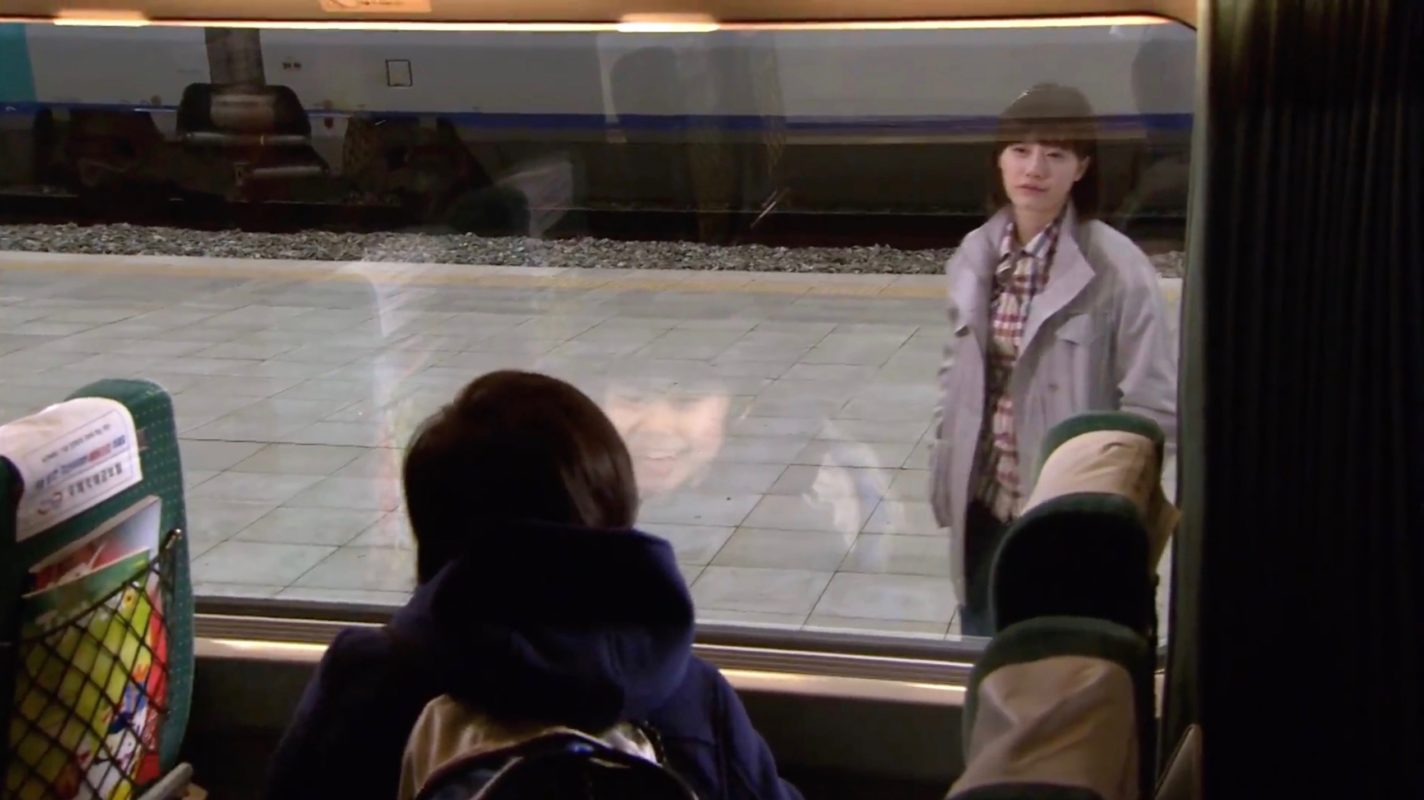 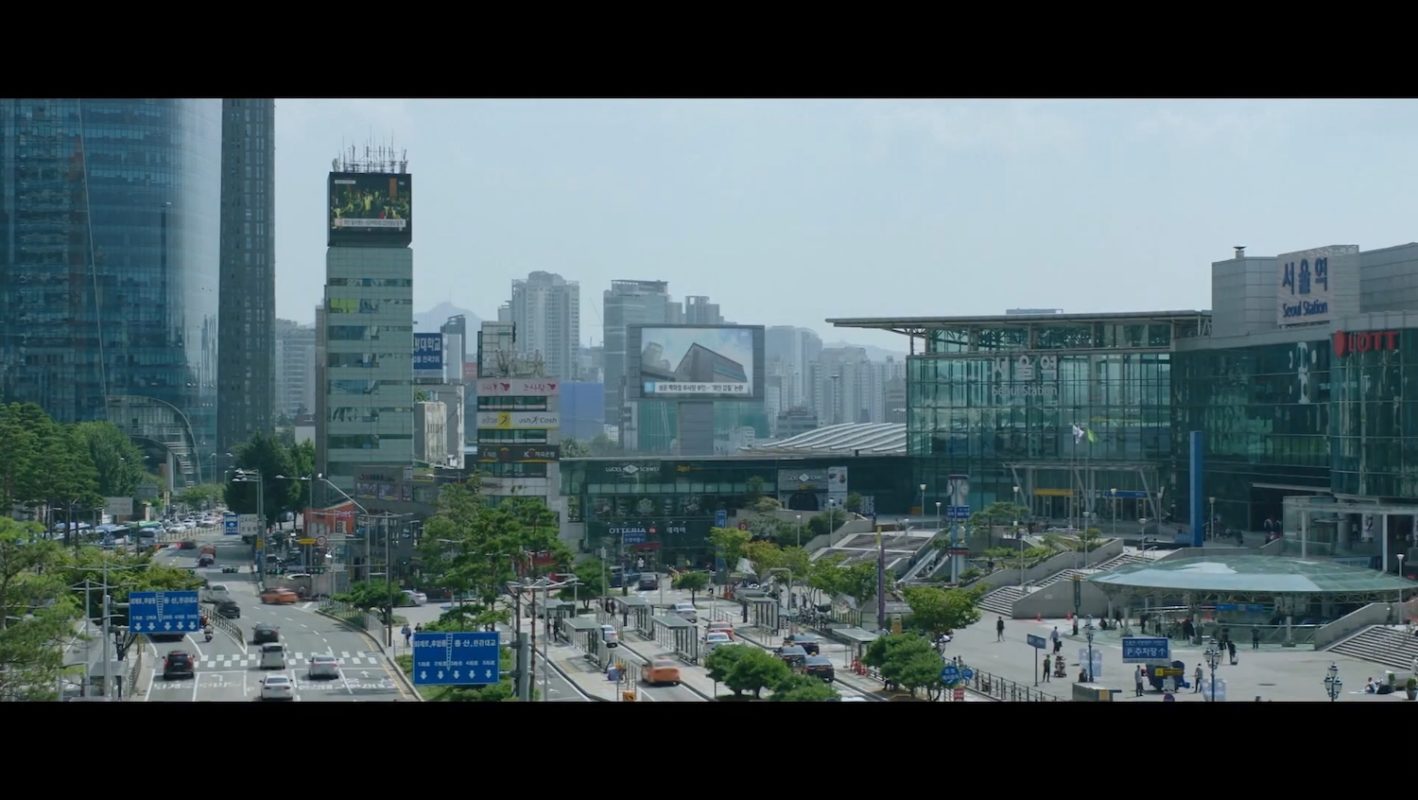 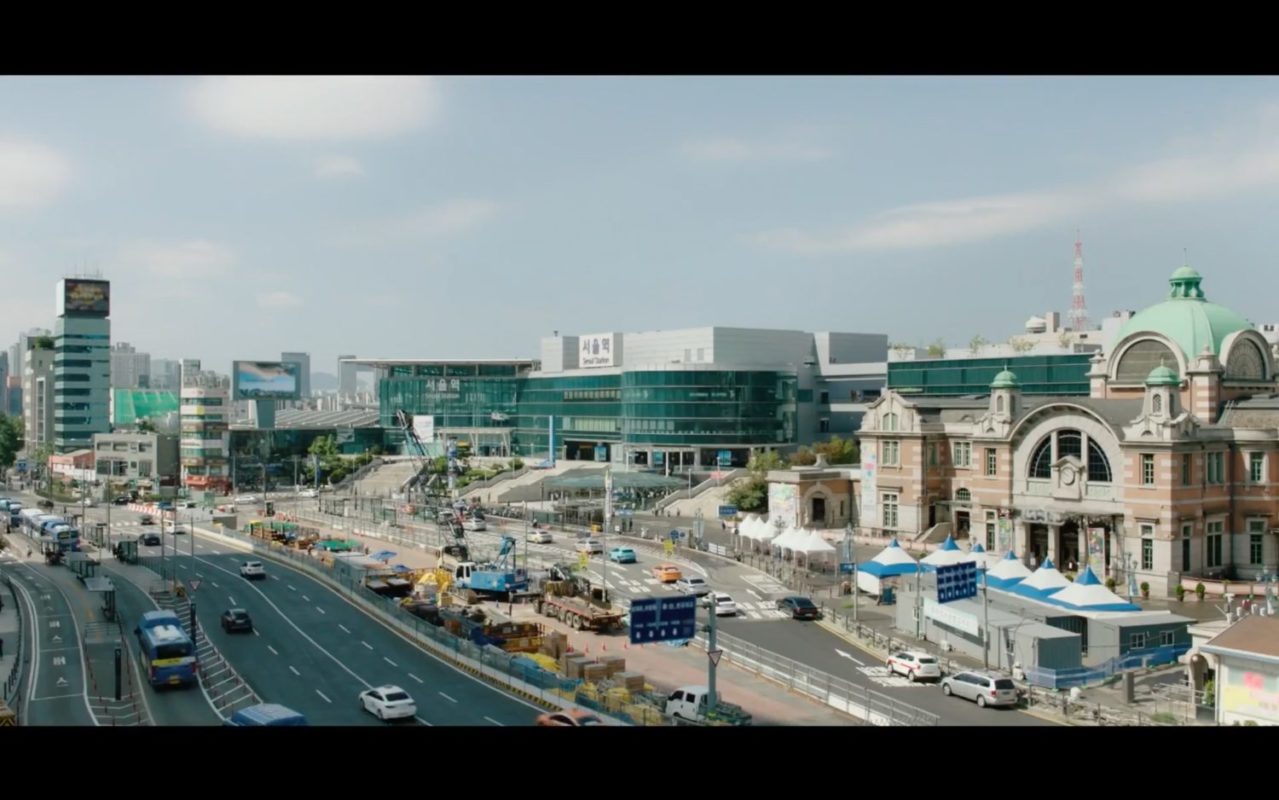 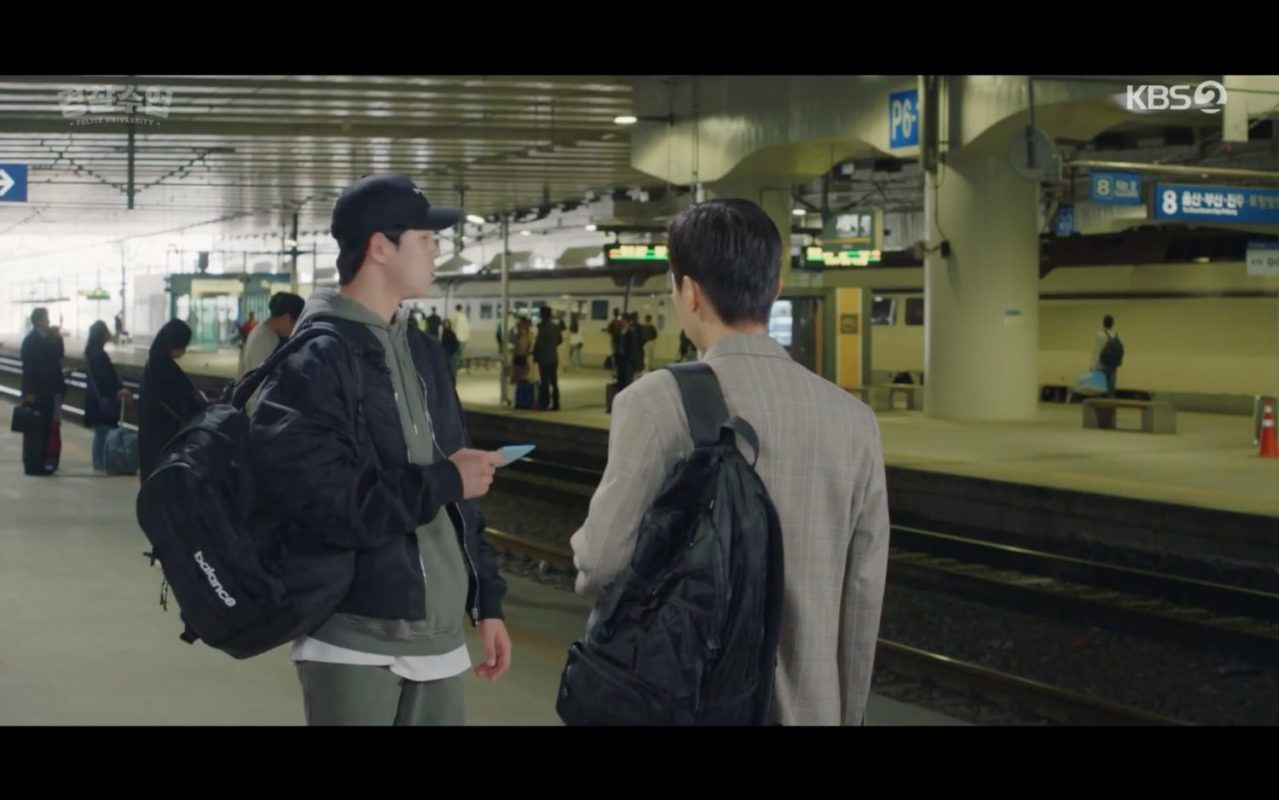 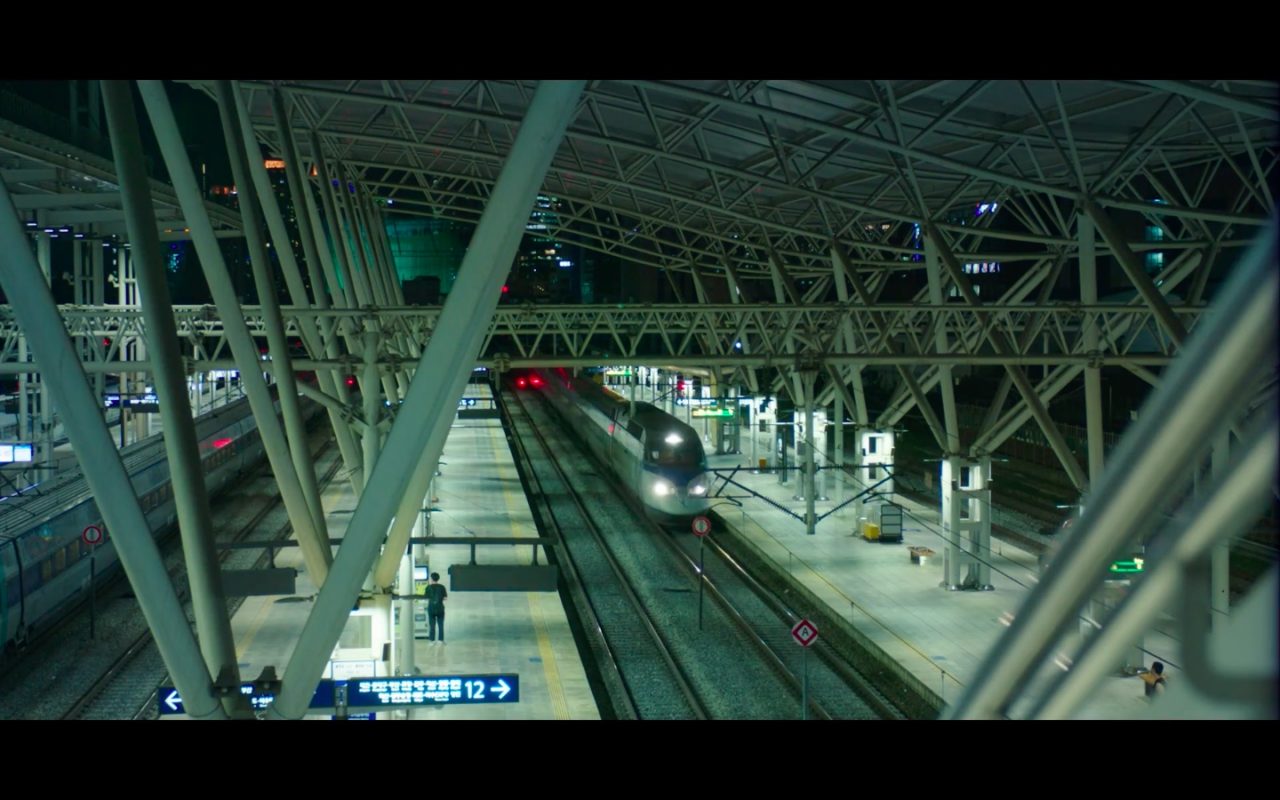 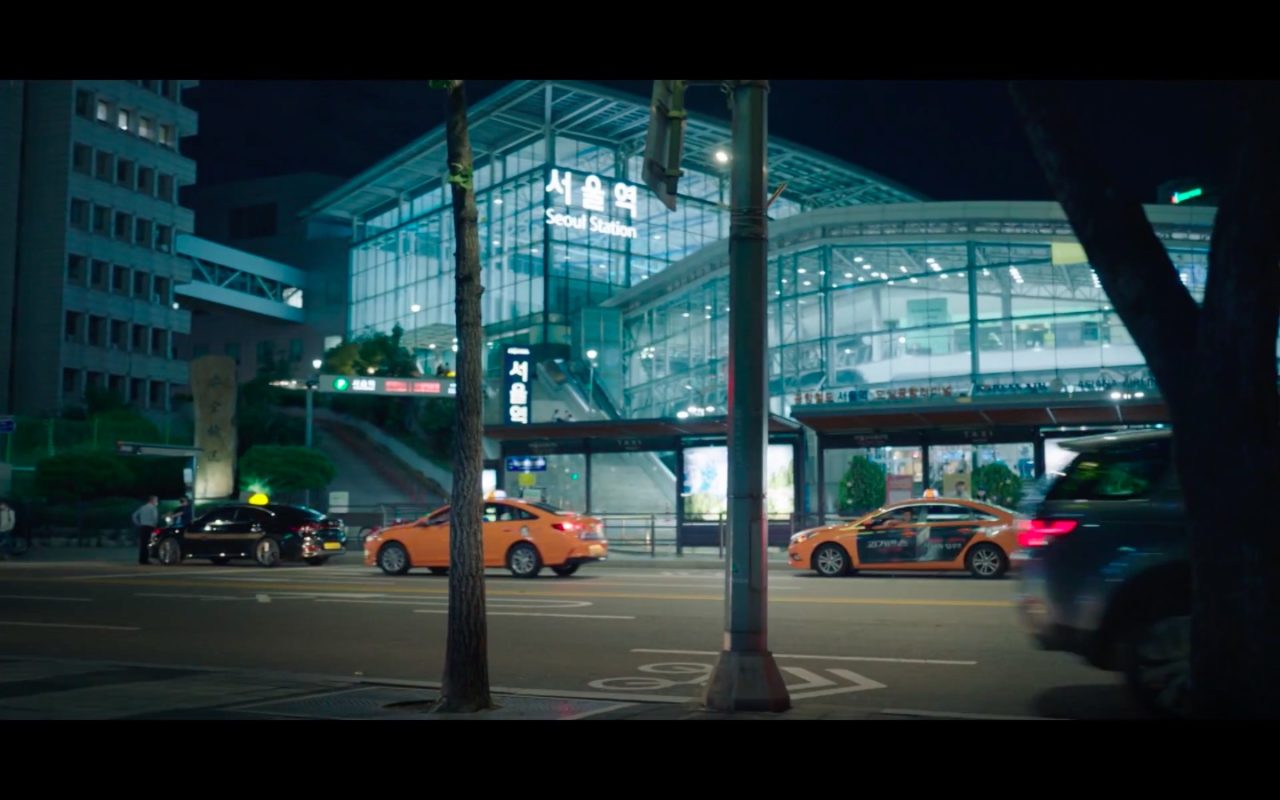 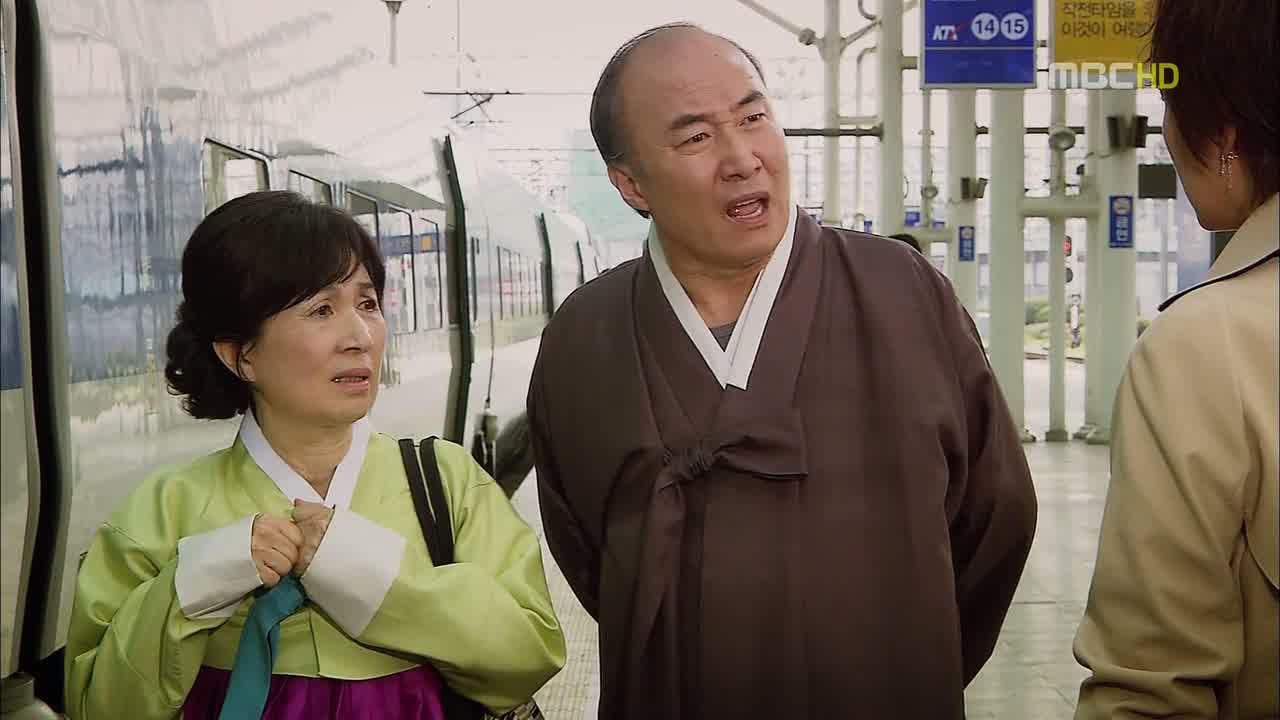 After returning from Cheongju, Ji Yoon-su (Im Soo-jung) alights at this train station and is picked up by her fiance Ryu Sung-jae (Choi Dae-hoon) in episode 1 of Melancholia (멜랑꼴리아) (tvN, 2021).

Both Kang Seon-ho (Jung Jin-young, formerly of B1A4) and Yoon Seung-beom (Choi Woo-sung) leave home – Seon-ho to the Police University and Seung-beom to the army – at this station in episode 2 of Police University//Police Academy (Kyeongchalsueob/경찰수업) (KBS2, 2021).

Yoon Ji-soo (Lee Bo-young) sees Han Jae-hyun (Yoo Ji-tae) in a news report on a screen inside this station, in episode 8 of When My Love Blooms/The Most Beautiful Moment in Life (화양연화 – 삶이 꽃이 되는 순간) (tvN, 2020).

News about the Sung Un Department Store’s vice-president’s wife mistreating On Yu-ri (Pyo Ye-jin) at the Tifone event is aired on a big screen next to this station, in episode 18 (full episode 9) of VIP/V.I.P. (브이아이피/Beuiaipi) (SBS, 2019).

Prosecutor Kang Sung-mo (Kim Kwon) is seen delivering a statement over an LED screen here in episode 1 of He is Psychometric/That Psychometric Guy (사이코메트리 그녀석) (tvN, 2019).

News of the Woosung Serial Killer’s reappearance has the nation on edge, and people are seen following the news reports at the station in episode 27 of Partners for Justice / Investigation Couple (검법남녀) (MBC, 2018).

Kim Min-kyu (Yoo Seung-ho) decides he needs a change of air and takes the train and not his car from this station to a company meeting in episode 20 of I’m Not A Robot (로봇이 아니야) (MBC, 2017-18). Coincidently, his seat is just opposite of Jo Ji-ah’s (Chae Soo-bin) who takes the same train.

In episode 16 of Criminal Minds (크리미널 마인드) (tvN, 2017), the exterior of Seoul Station is featured, to show that Yoo Min-young (Lee Sun-bin), Nana (Yoo Sun), Min-young’s niece and Team Manager Kang’s son had just returned from a trip (but their scene was filmed elsewhere).

Yoo So-joon (Lee Je-hoon) stumbles out of this station in a daze in episode 2 of Tomorrow With You (내일 그대와) (tvN, 2017), after time-travelling 6 years into the future. There, he meets fellow time-traveller Doo-sik (Jo Han-chul), who becomes his mentor.

Hwang Ji-an (Kim Sun-ah) catches her parents just before they board the train to return home in episode 1 of I Do, I Do (아이두 아이두) (MBC, 2012). Her parents had come especially for her dad’s 70th birthday to Seoul but she didn’t manage to attend because of work.

Geum Jan-Di (Goo Hye-sun) sends off her brother Keum Kang-san (Park Ji-bin) at this station to their parents’ place at the sea in episode 19 of Boys Over Flowers/Boys Before Flowers (꽃보다 남자) (KBS2, 2009).

Seoul Station [서울역] is a major railway and subway station in Seoul. Its contemporary entry hall was erected for the 1988 Olympic Games and the KTX Terminal was opened in 2004. This site was selected in 2012 as one of 100 regular filming locations for movies and dramas by the Seoul Metropolitan Government and the Seoul Film Council, and featured in the brochure The Places In Seoul Cinema Fell in Love With (영화가 사랑한 서울 촬영지 100선).

It is located opposite Seoul Square [서울스퀘어] in Seoul’s neighborhood Hoehyeon [Hoehyeon-dong/회현동] in the Jung District [Jung-gu/중구].

Note: Some address variations list this station as being in the Jung District, Bongnae-dong, or Cheongpa-ro.