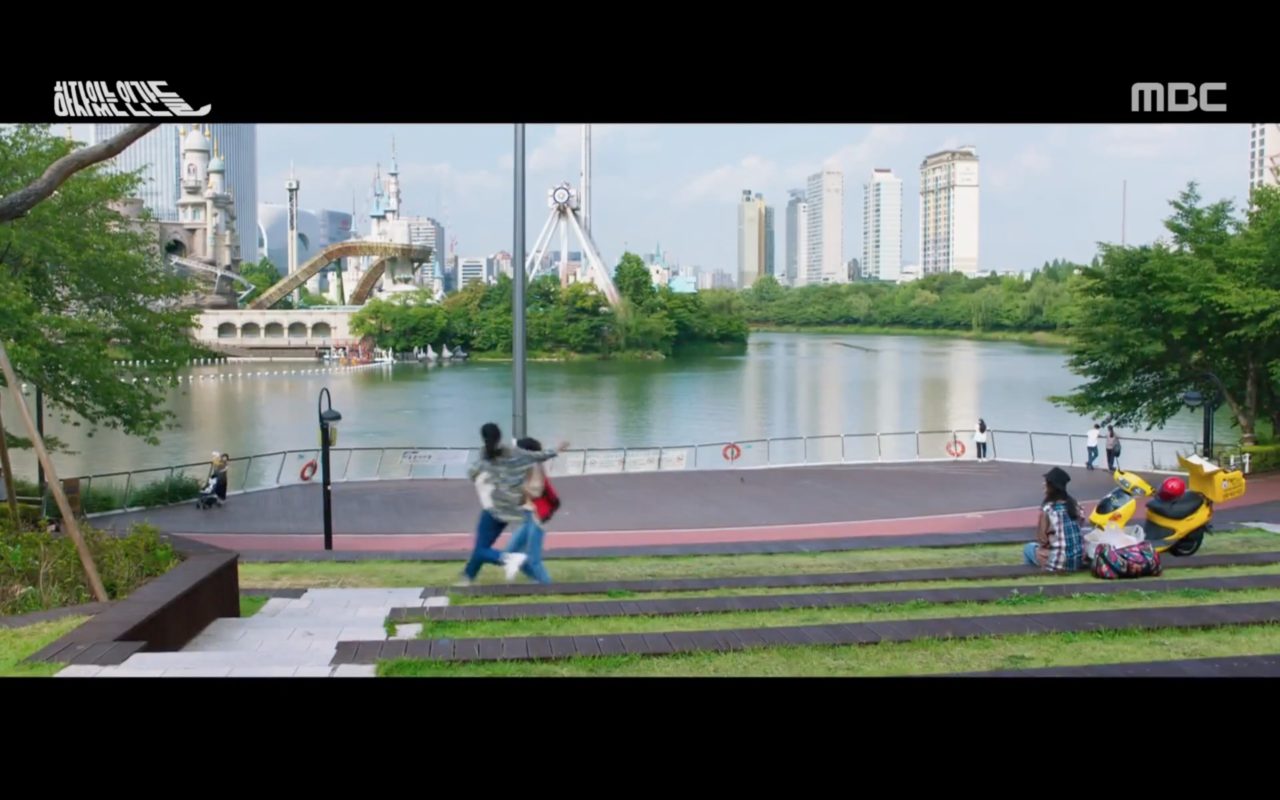 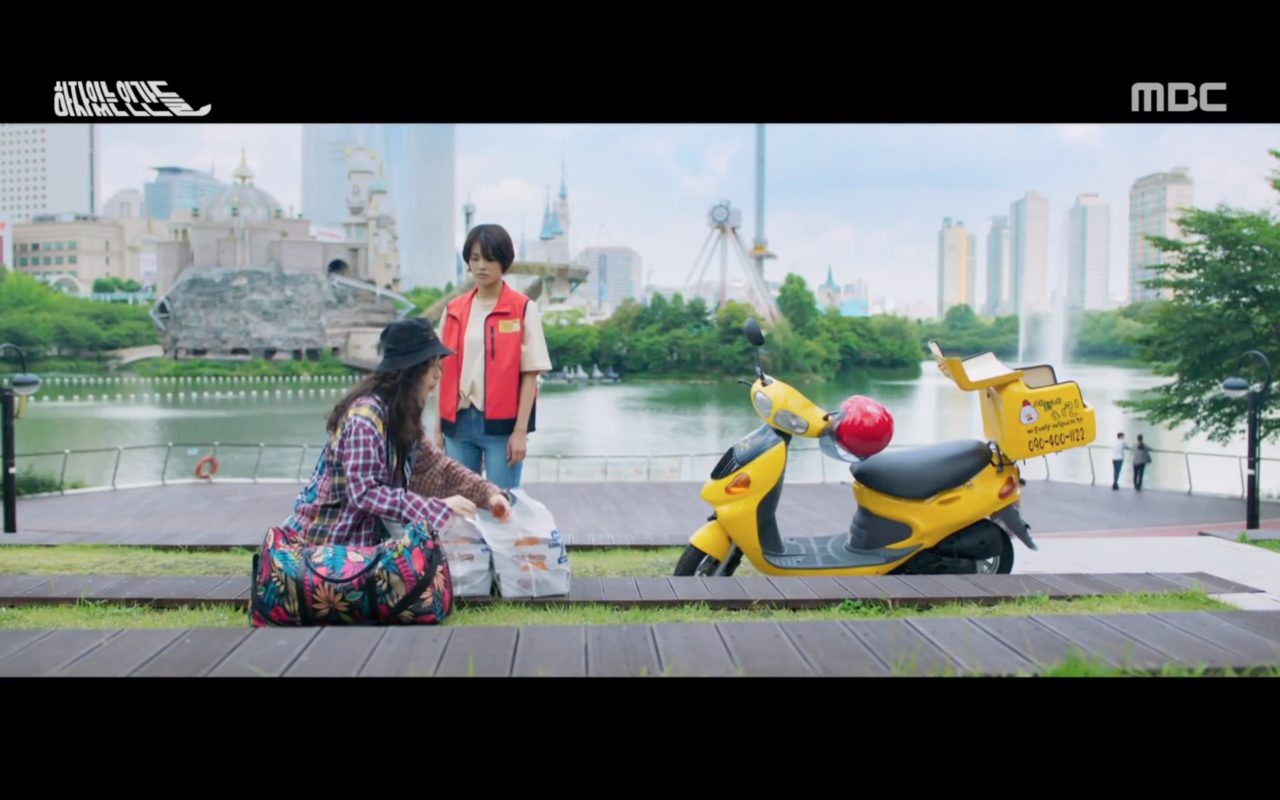 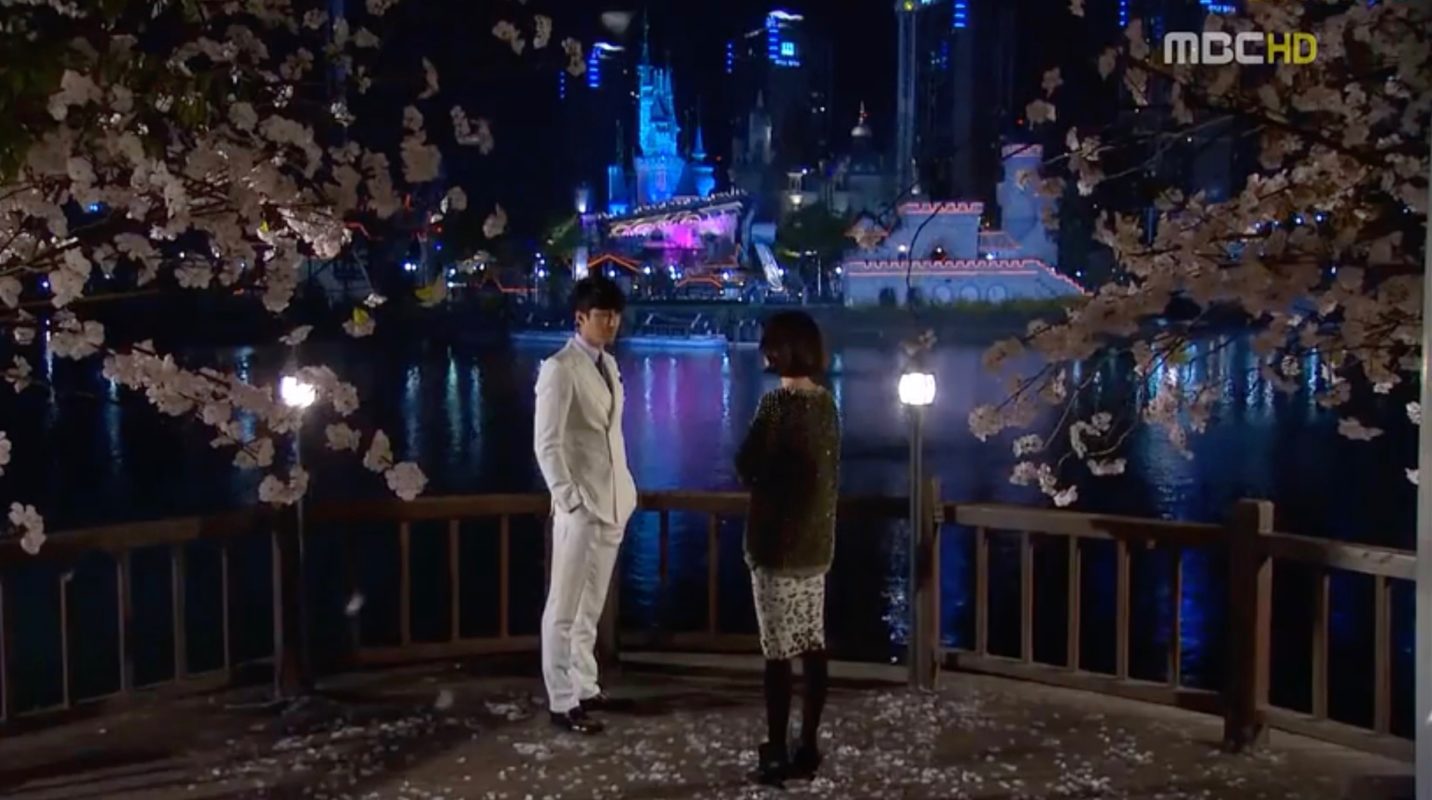 West Lake — Lee Joo-hee (Joo Hae-eun) delivers food for Baek Jang-mi (Shin Do-hyun) to the amphitheater of this park (also known as ‘Seokchon Lake View’) in episode 3 (full episode 2) of Love With Flaws (하자있는 인간들) (MBC, 2019-20). At the same time, Joo Seo-yeon (Oh Yeon-seo) arrives at this spot, and gets in a quarrel with her student Joo-hee.

The park is comprises of two artificial lakes, known as the 4-5meter deep East Lake (Seoho) and West Lake (Dongho), with the major boulevard Songpa-daero [송파대로] running between them. The east lake and its surrounding park is a local residential park, whereas the west lake constitutes the outdoor artificial island ‘Magic Island’ of amusement park Lotte World [롯데월드], which sits in the middle of the lake.

Originally, this lake constituted the main stream of Hangang (Han River) and the Songpa River [송파강이], while the Songpa Ferry (Songpa Naruteo/송파나루터/송파진의) was located here; its exact location was where the Songhojeong Pavilion is located today. When the Songpa River was reclaimed in 1971, Seokchon Lake was created, with and trails and shelters being set up in the following decade. However, the park and its aging facilities was not popular among citizens, which led to the Songpa District redeveloping it to be more attractive again, especially from when Lotte World was built in 1989.

The lake park was re-designed by the director of interior and architecture company Rodemn AI (로담A.I), Kim Young-ok (김영옥), by order of the Songpa District Office (송파구청) in 2008. Part of this Seokchon Lake Project [석촌호수프로젝트] was also to design Café Papillion [빠삐용] and restaurant The Dining Lake [더다이닝호수], which are also situated here.

The park is particularly popular for viewing cherry blossoms and fall leaves, and also allows for a scenic view of Lotte World Tower & Mall [롯데월드타워&롯데월드몰]. Internationally known artists such as Florentijn Hofman, KAWS and FriendsWithYou have also used the lake as an open museum or art display.

Fun Fact: According to the Wikipedia entry on Seoul’s Songpa District, the district collects their fallen Gingko leaves and sends them to Namiseom Island/Nami Island [남이섬 종합휴양지], where they are used to heighten the sightseeing experience. The district saves “12 million won a year” on disposal costs, and advertises that “Songpa makes use of everything, even fallen leaves.”