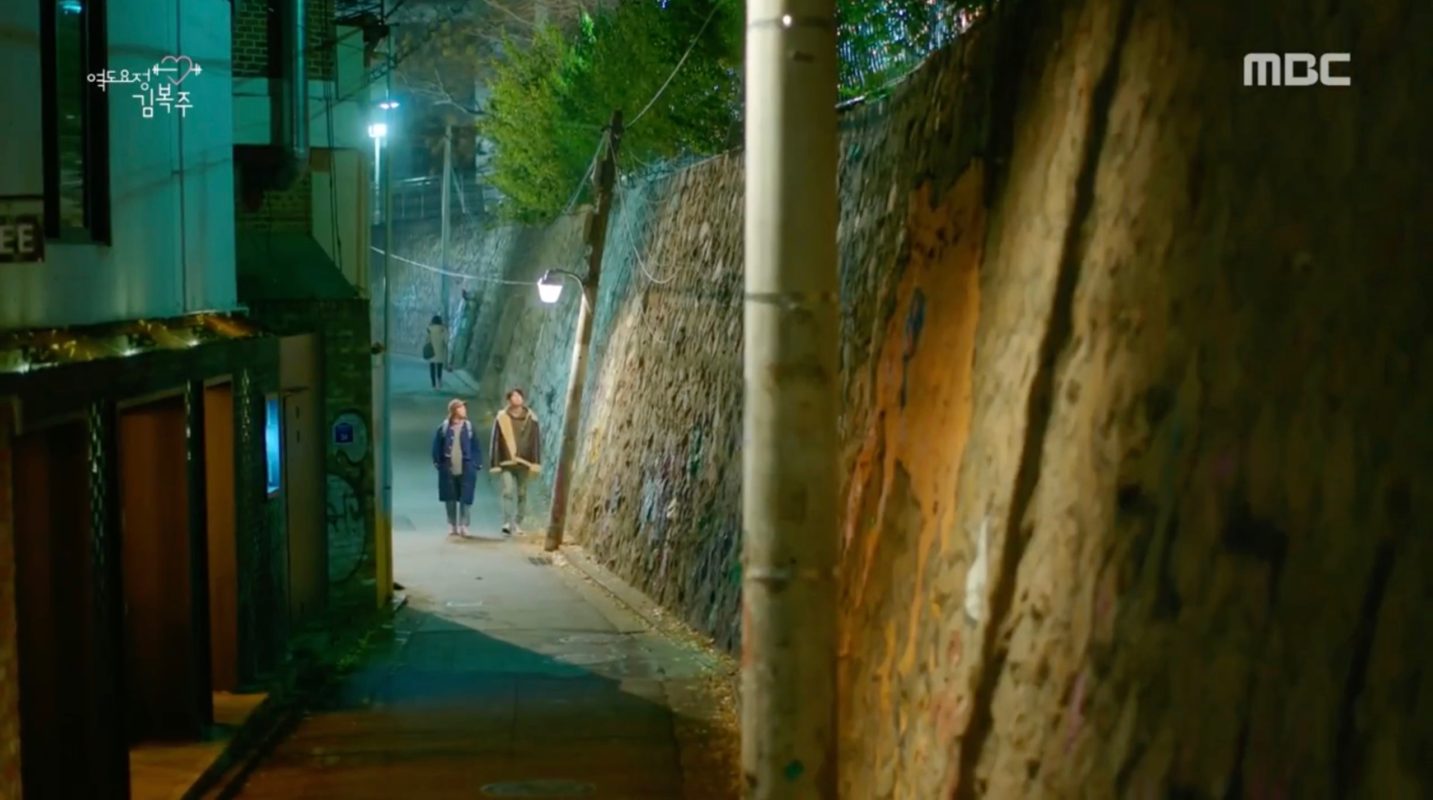 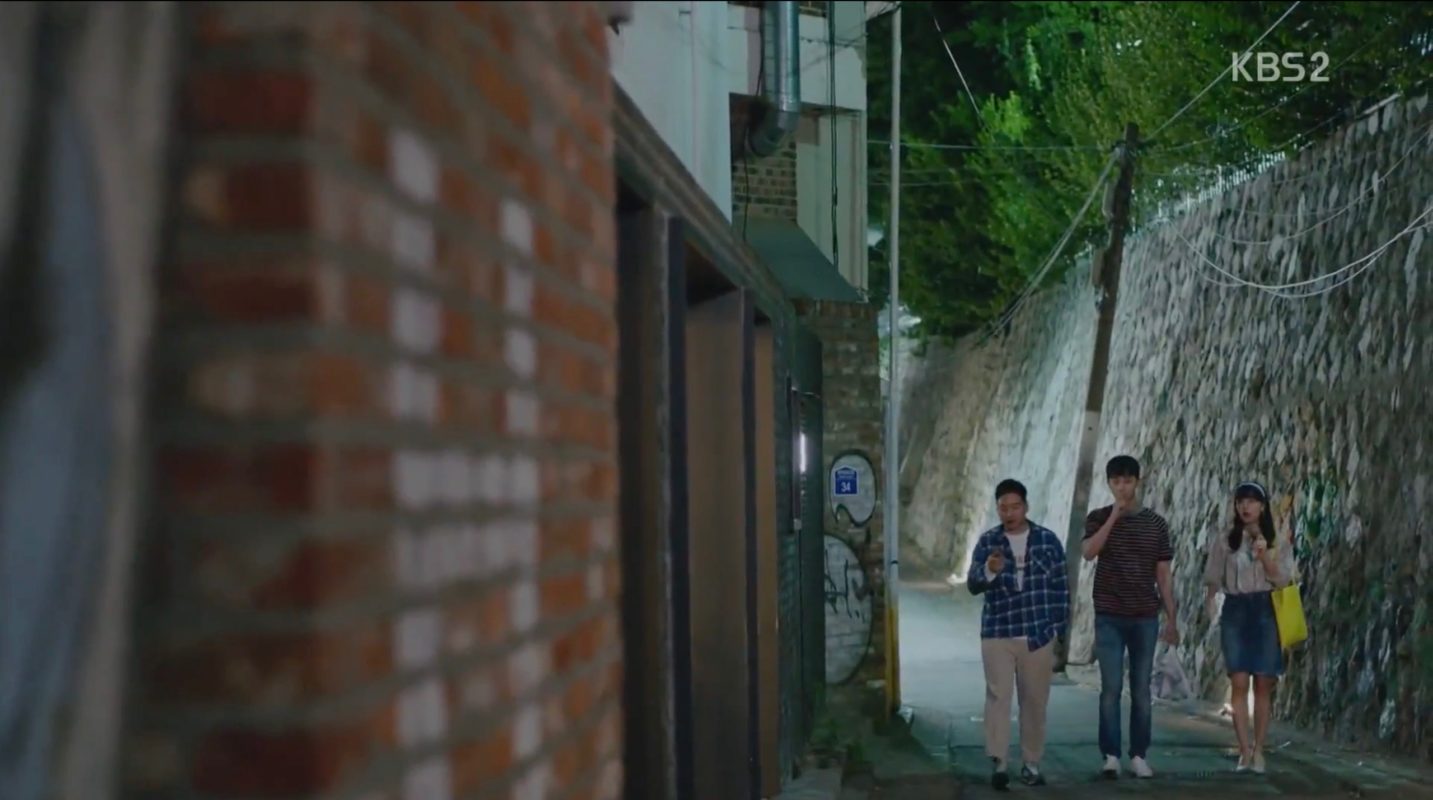 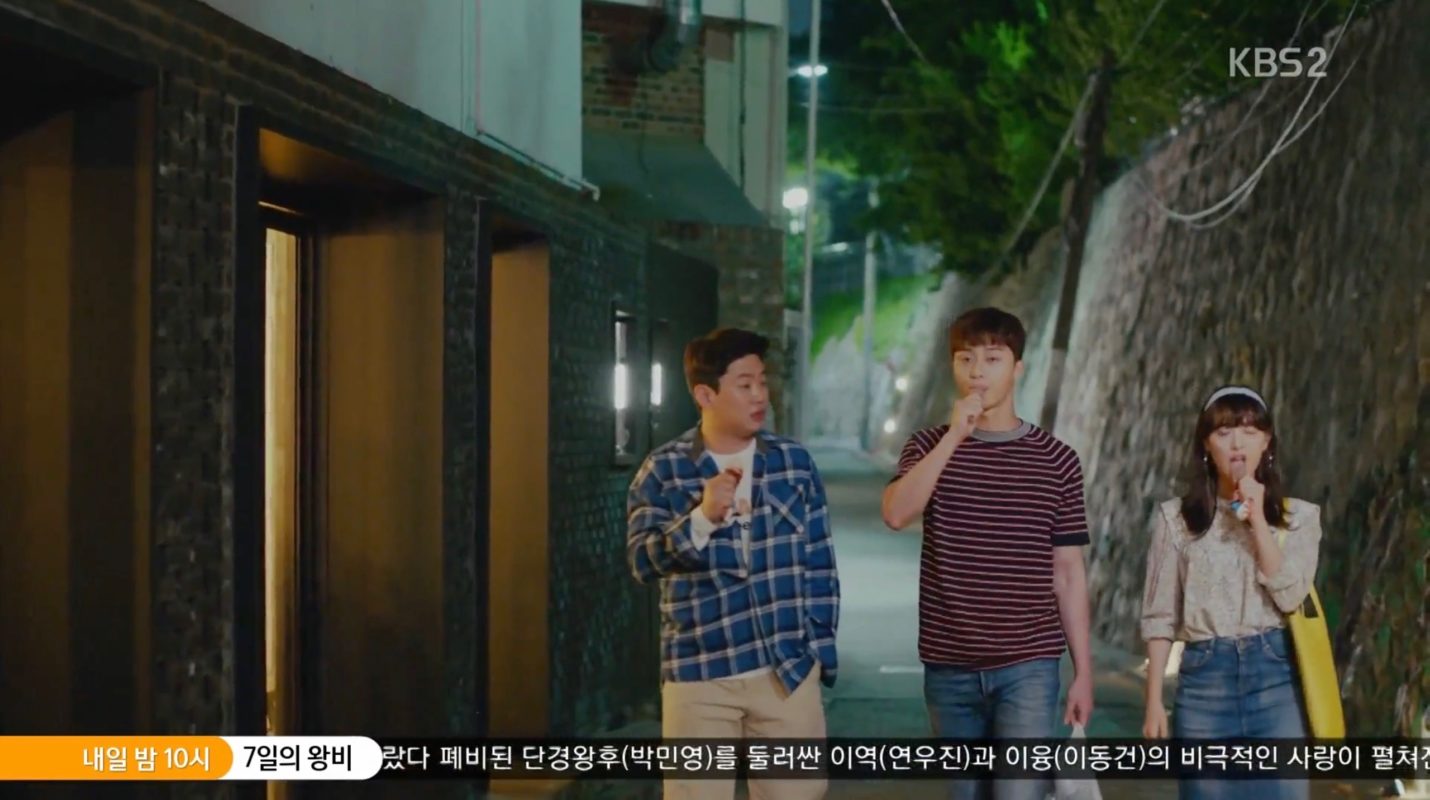 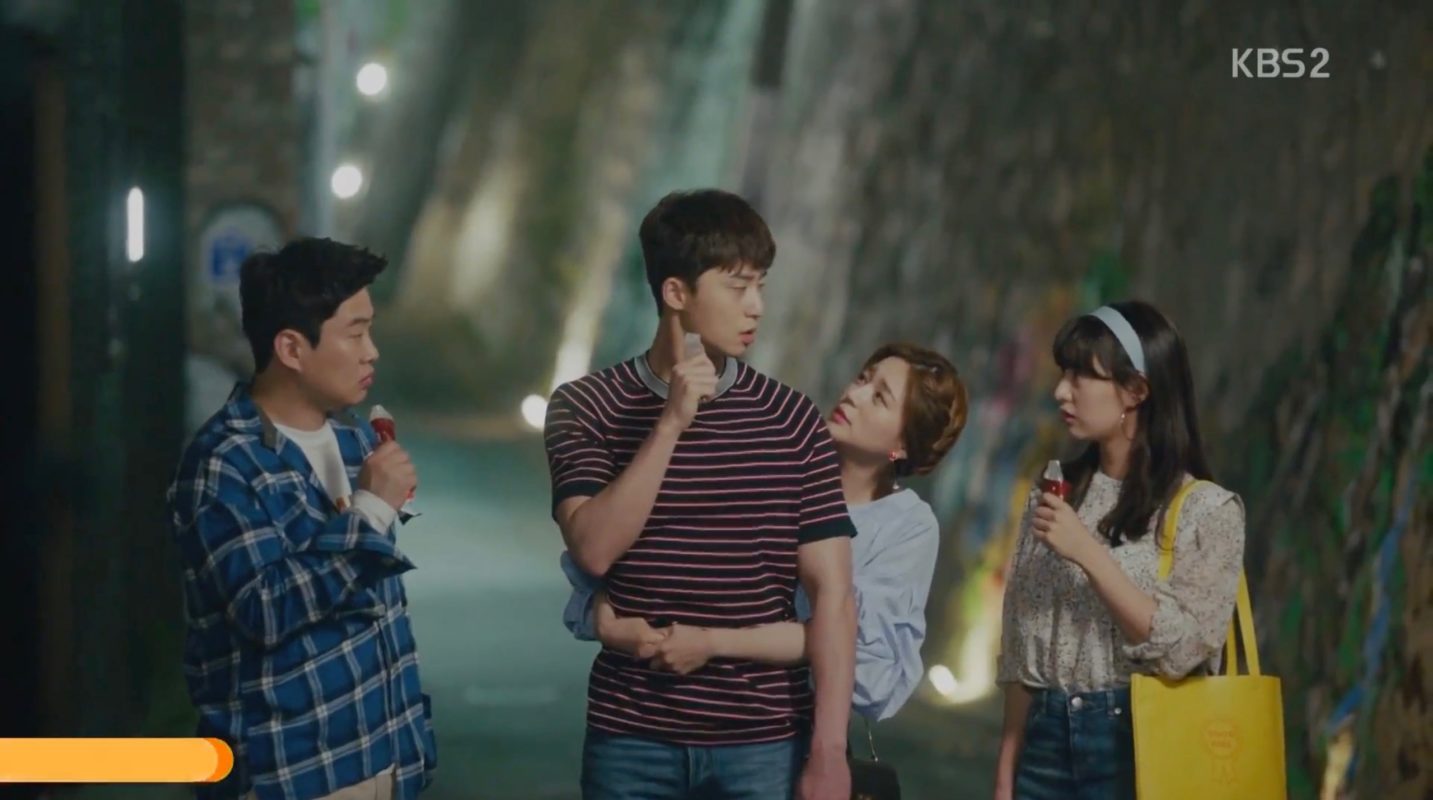 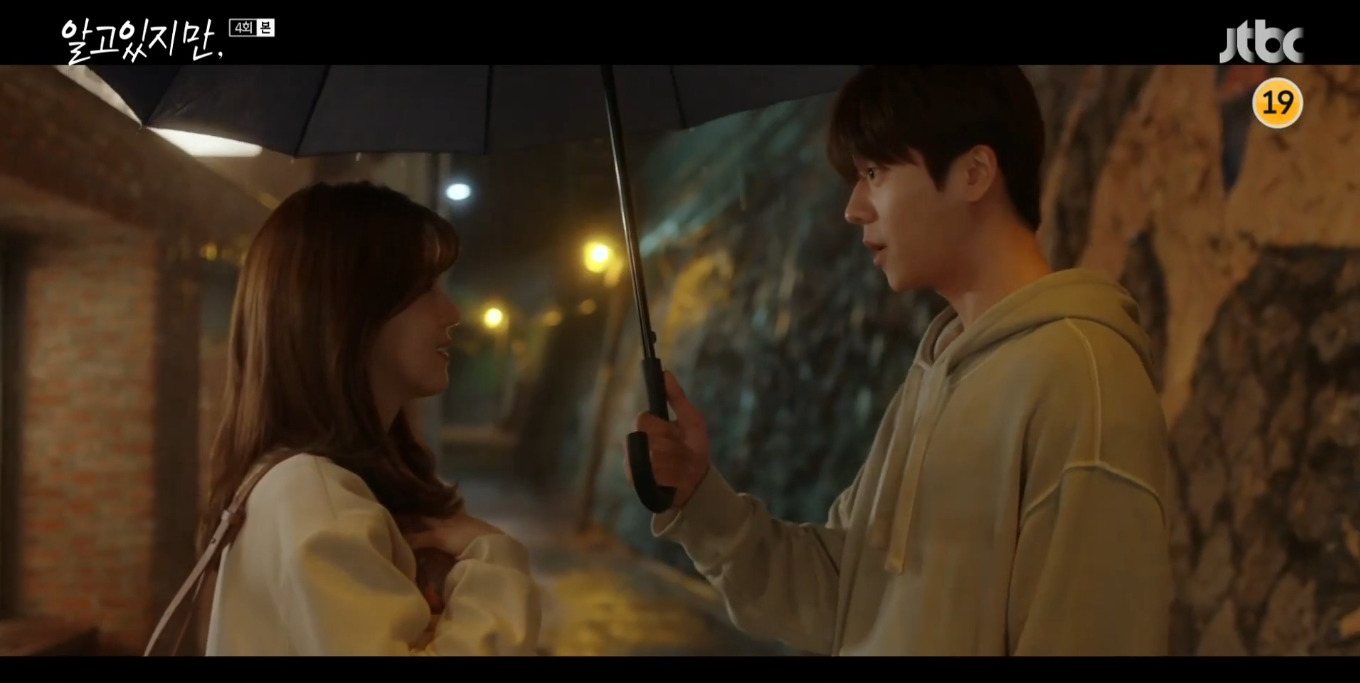 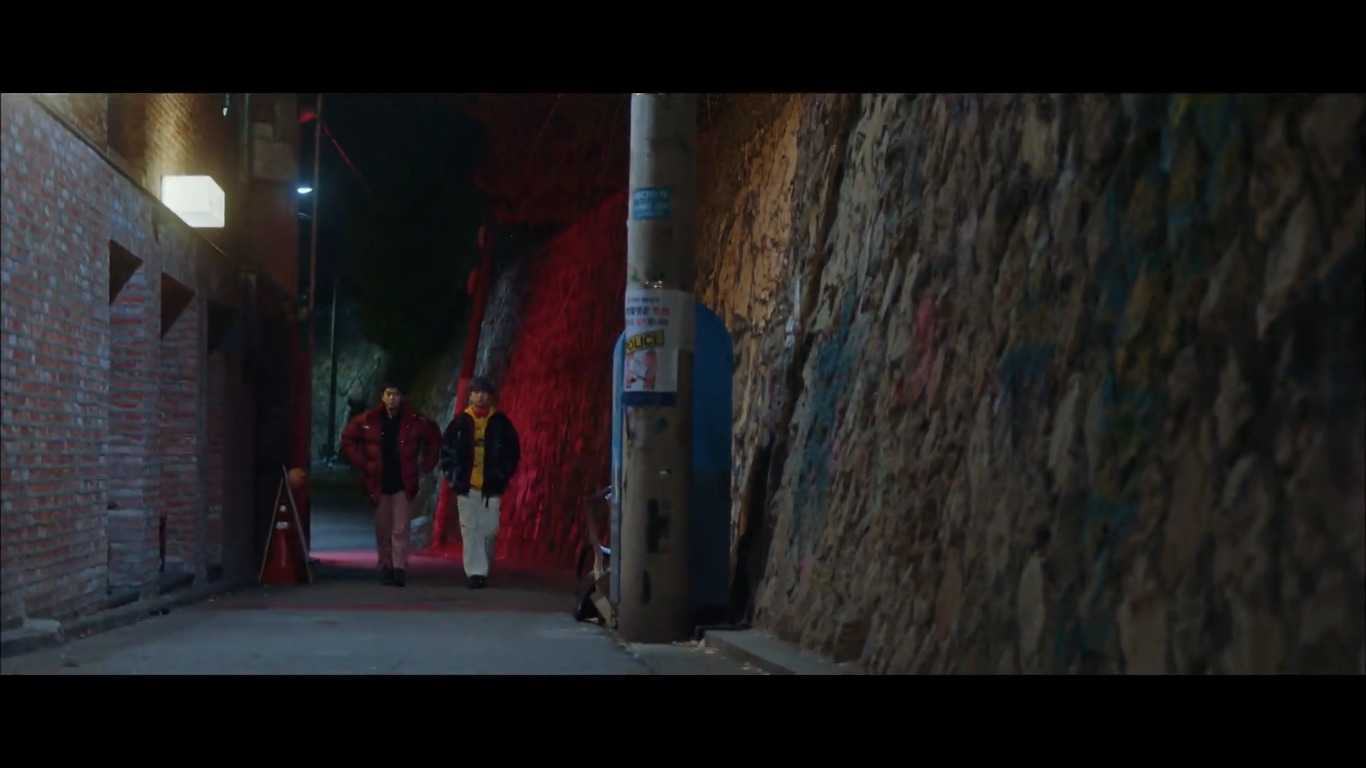 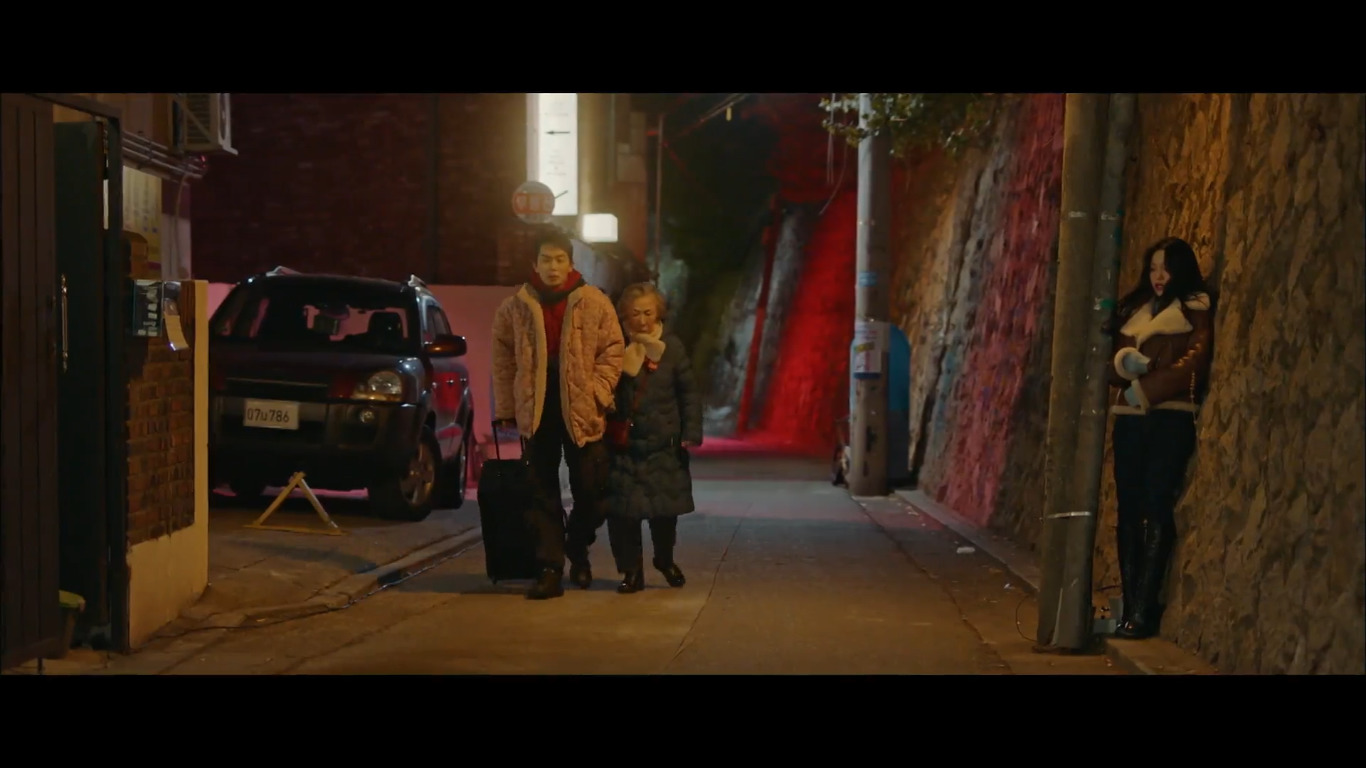 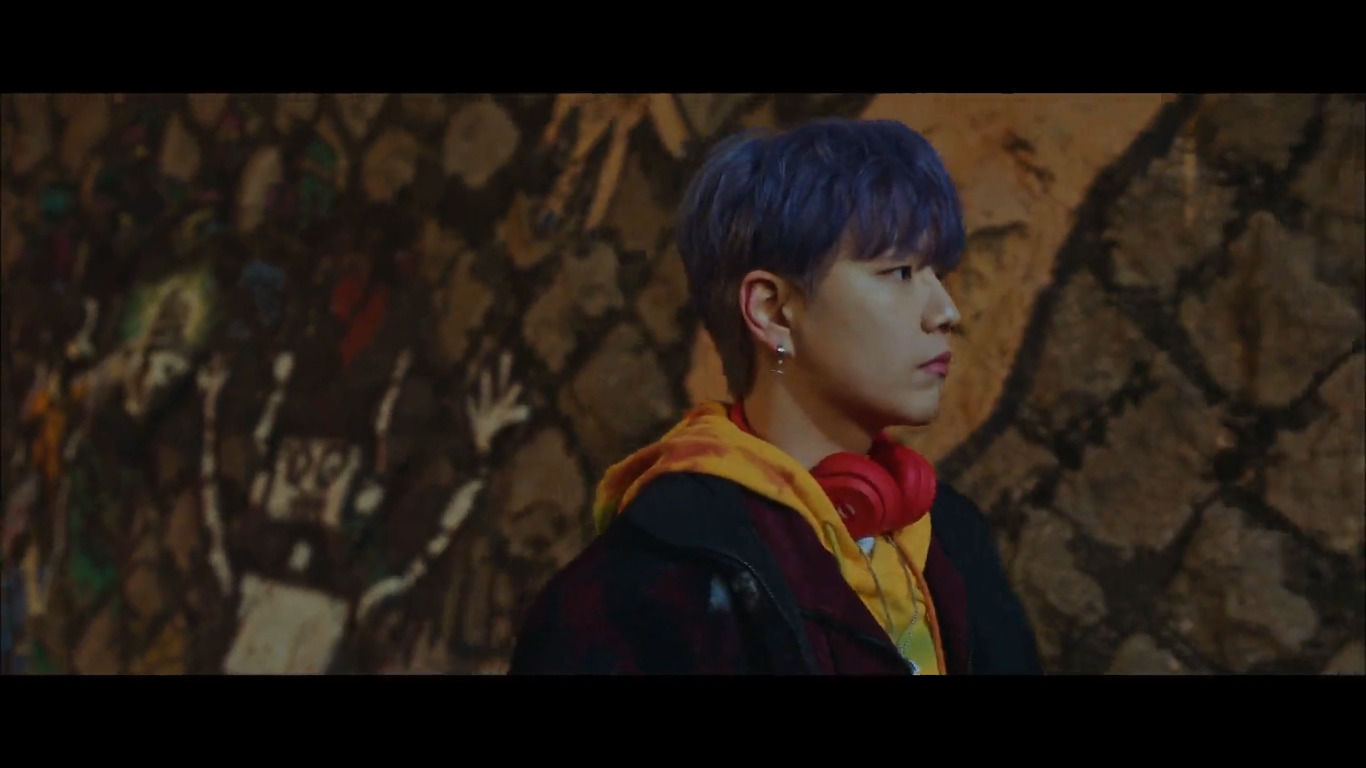 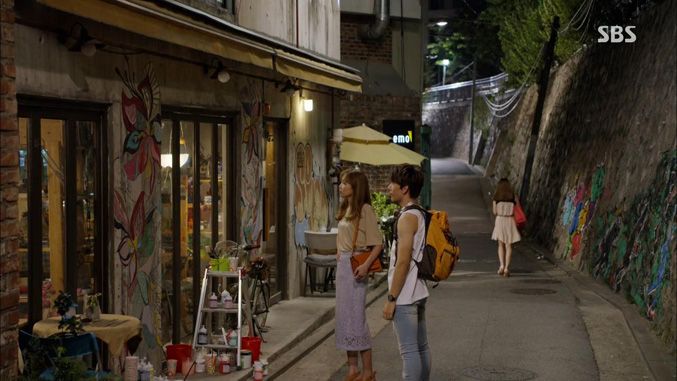 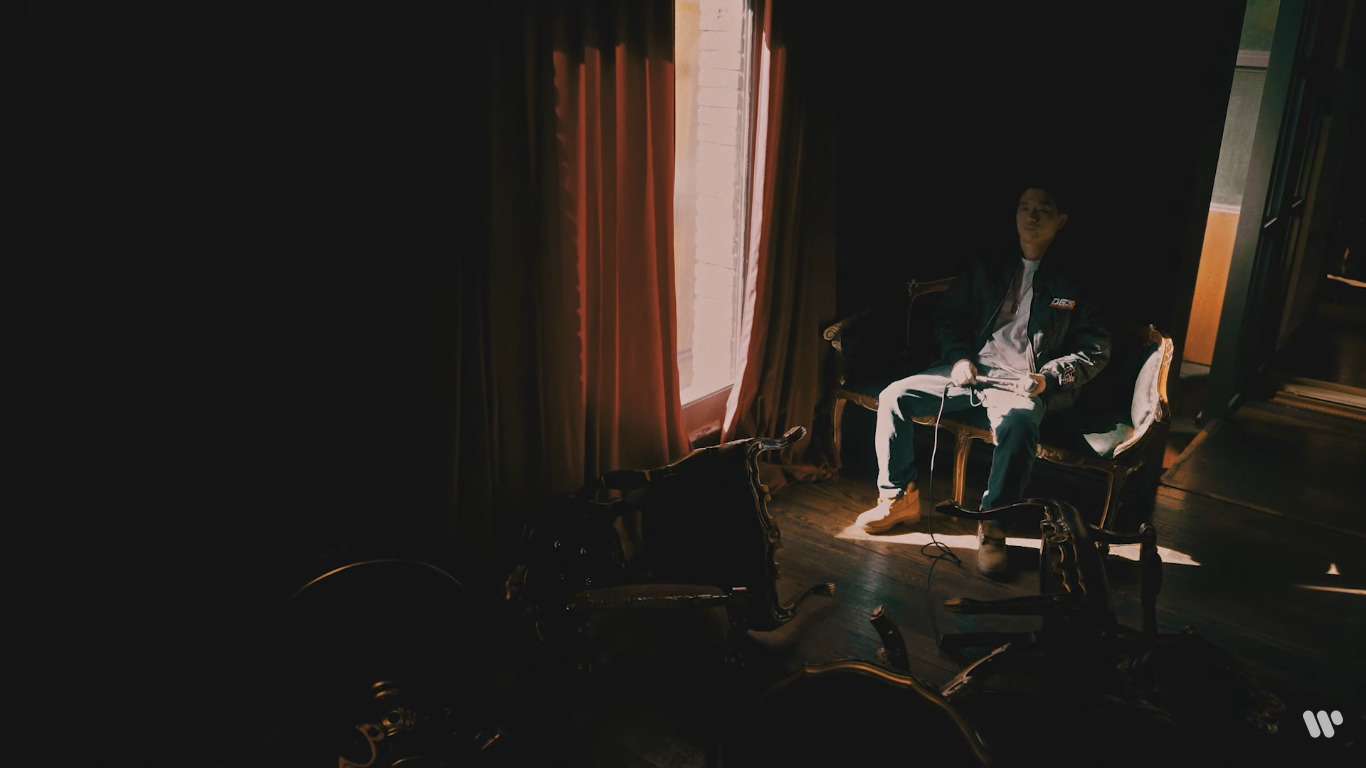 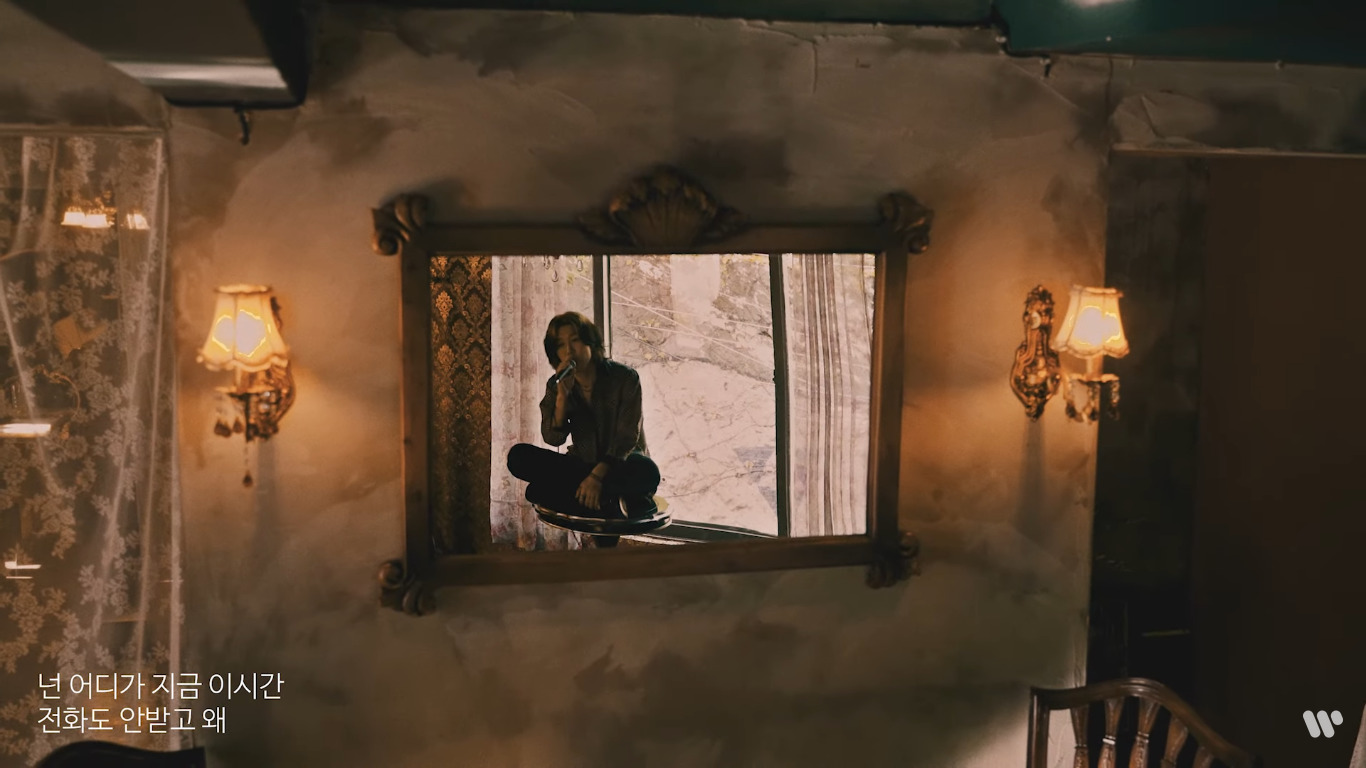 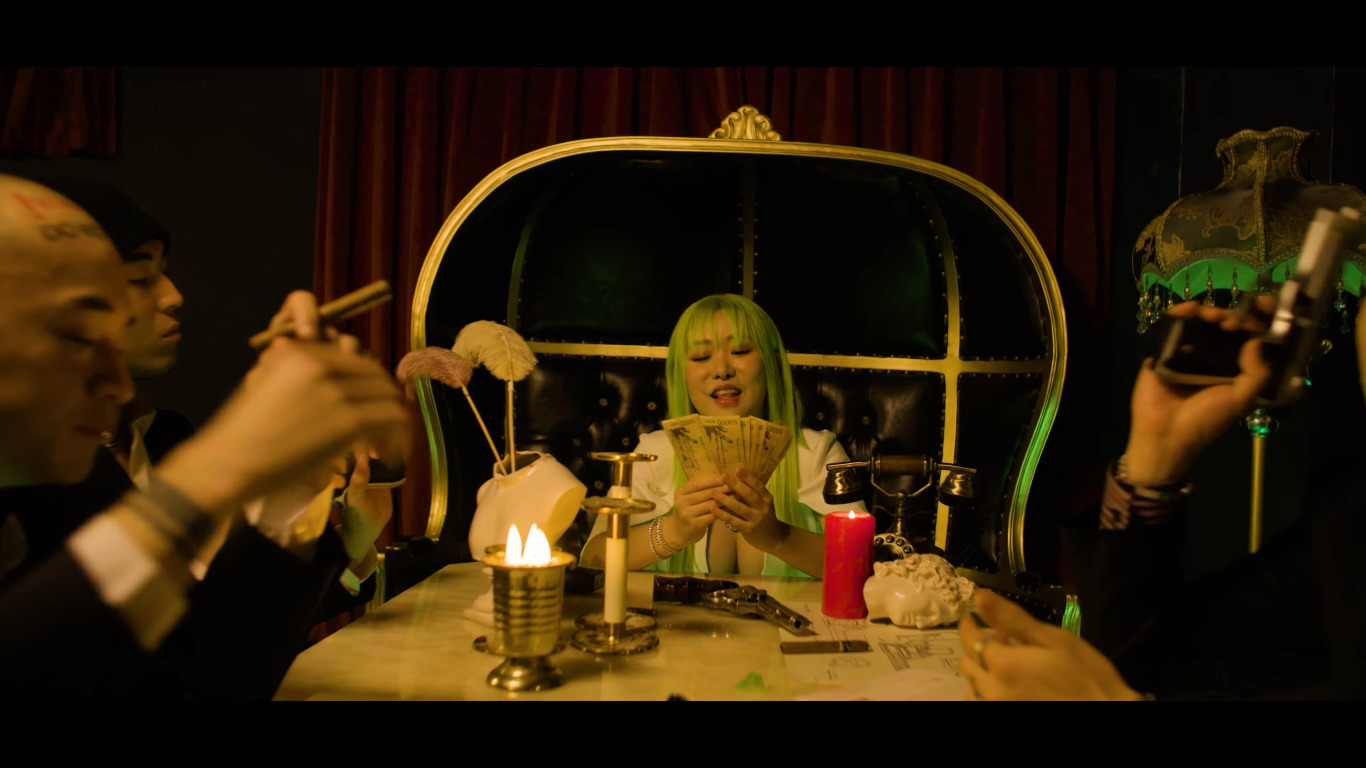 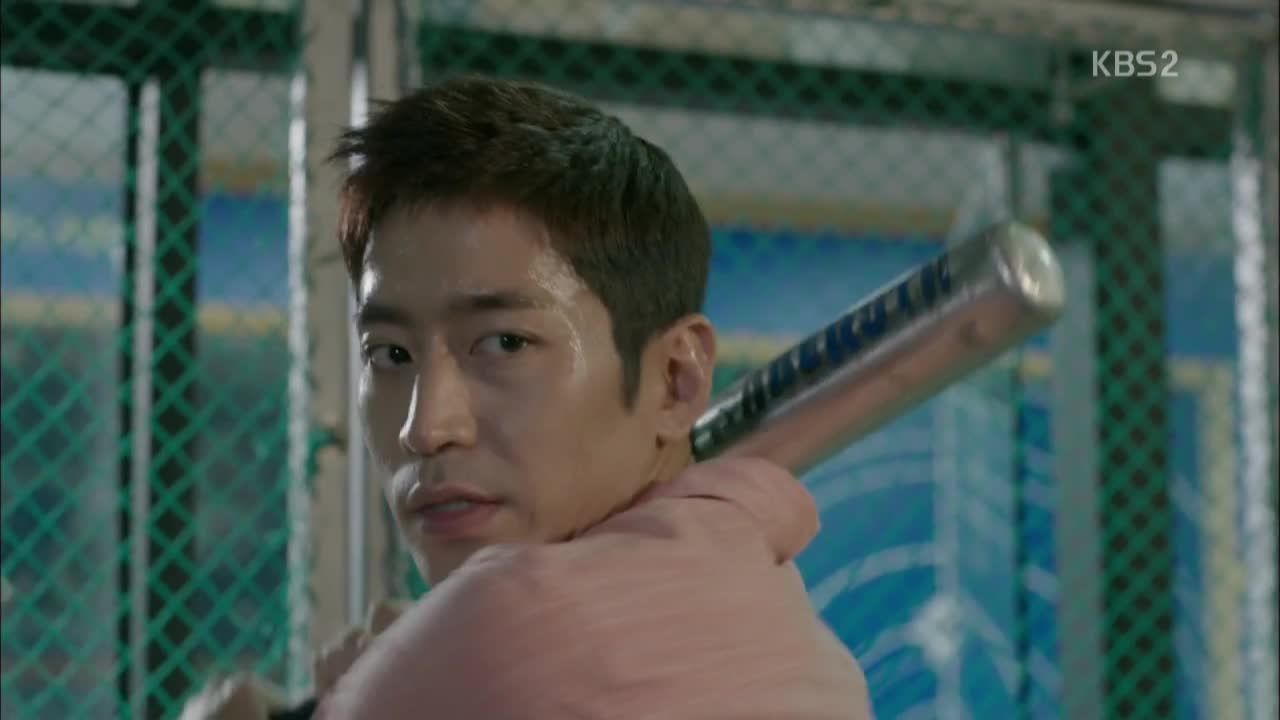 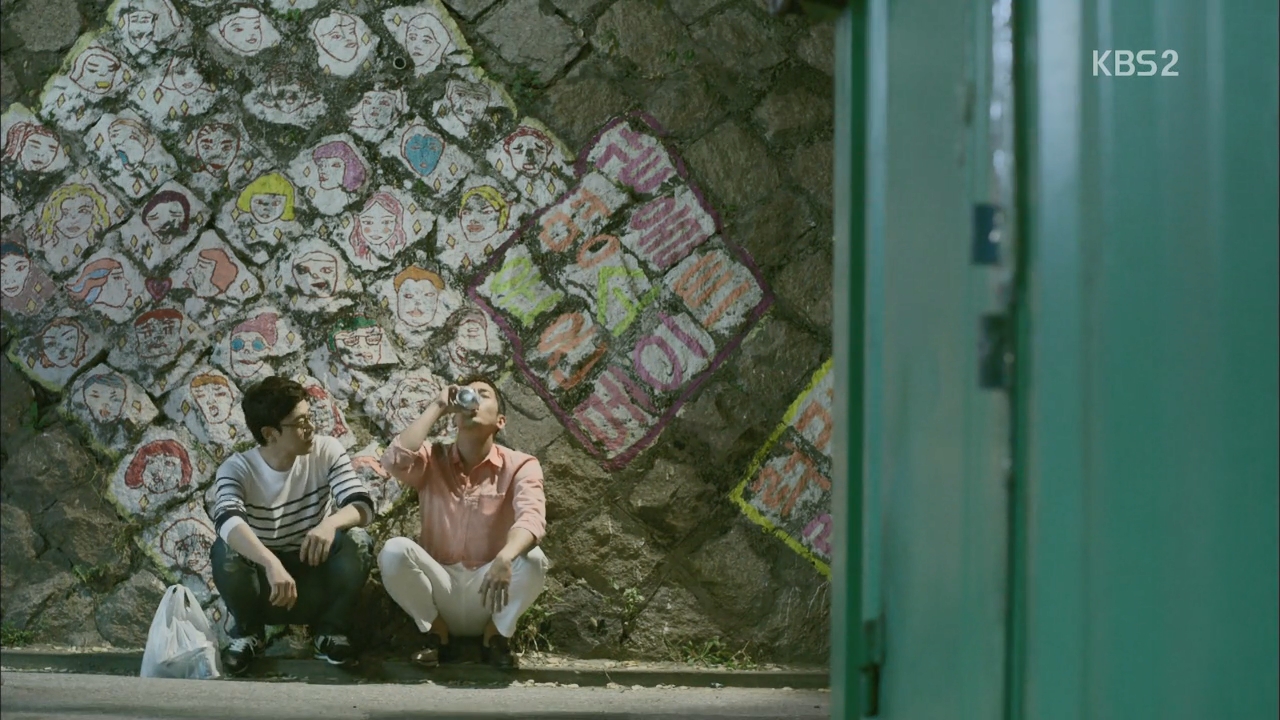 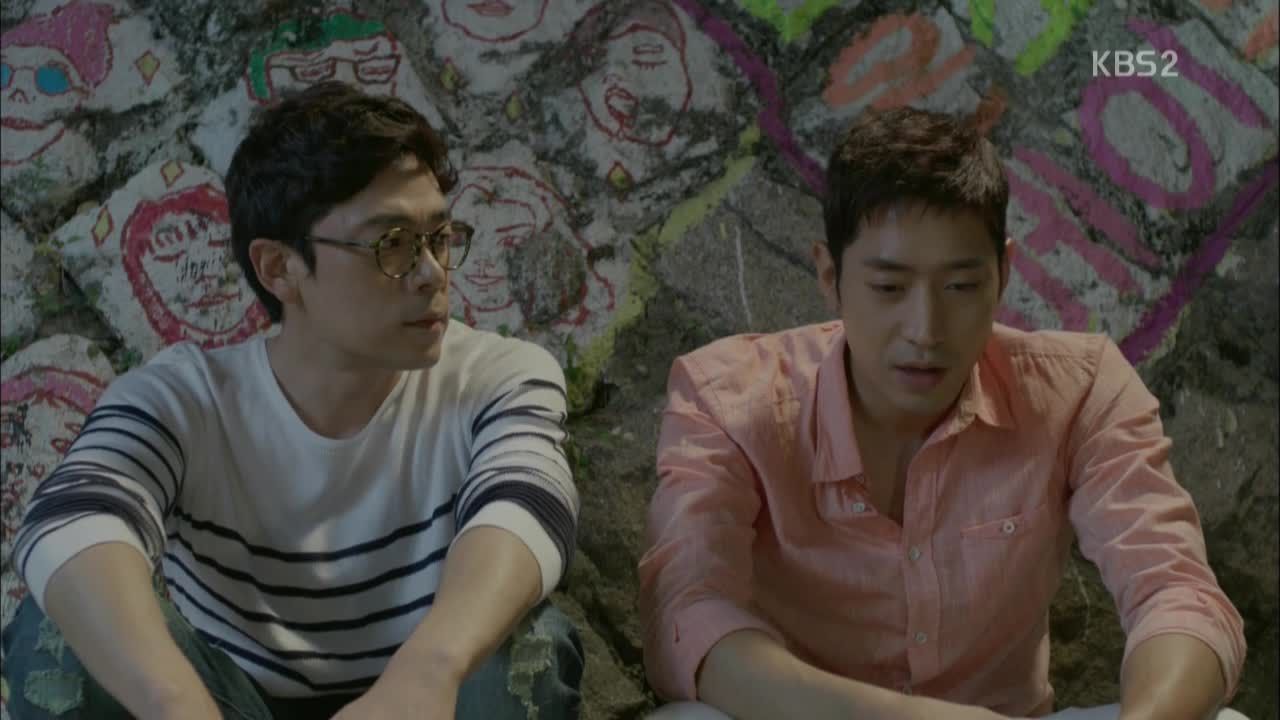 This café appeared in It’s OK, It’s Love/It’s Okay, That’s Love (괜찮아, 사랑이야) (SBS, 2014), and where the wall drawings were drawn by one of Ji Hae-soo’s (Gong Hyo-jin) patients. She meets him here and he proudly presents them to her in episode 7.

No. 34 — In Mint Condition (민트 컨디션) (tvN, 2021, Drama Stage Series — single episode), cantankerous old man Lee Hyun-cheol is having an MRI scan when the machine malfunctions, and wakes up to find he has been transformed to his 20-something year old self (An Woo-yeon). At a bus stop he recognises hip hop muso Lee Moon-se (Ji Min-hyuk), as he was also at the medical centre, and convinces him to help. Moon-se agrees to let him stay at his house, and they walk past this café on the way. Later Hyun-cheol finds the MRI nurse Hong Chae-ri (Yeri from Red Velvet) trying to hide from him behind a pole outside the café.

No. 34 — Yoo Na-bi (Han Soo-hee) runs into her childhood friend Yang Do-hyeok (Chae Jong-hyeop) on the bus, in episode 4 of Nevertheless/I Know But (알고있지만) (JTBC/Netflix, 2021). It’s raining heavily and Do-hyuk walks her home from the bus stop, sharing his umbrella. They stop outside this café and promise to catch up properly in a few days, and Do-hyeok runs back to the bus stop in the rain.

No. 34 — Kim Bok-joo (Lee Sung-kyung) and Jung Joon-hyung (Nam Joo-hyuk) pass by this café when he brings her home in episode 11 of Weightlifting Fairy Kim Bok Joo (역도요정 김복주) (MBC, 2016-17). She tells him that her crush on his brother slowly fades away and he is jealous of her co-worker and kicks a light pole.

No. 360-15 [Hongdae Baseball Training Center/홍대야구연습장] — Angry and frustrated Kang Tae-ha (Eric) comes to the battling cage Hongdae Baseball with good friend Yoon Jung-mok (Lee Seung-Joon) in episode 10 of Discovery of Love/Discovery of Romance (연애의 발견) (KBS2, 2014). When Jung-mok finally manages to convince Tae-ha to stop, they have a heart-to-heart talk at the street just in front of the place.

Café Jauindle [카페 자유인들] (which translates to “freedom”) opened in January 2019 as a café and pub and is spread over two floors of the SEMO Building. The building is located in the alleyway Wausan-ro 22-gil [와우산로22길] —also known as Hongdae Mural Street/Alley [홍대벽화거리] — in Hongdae [홍대], which is part of Seoul’s neighborhood Seogyo [Seogyo-dong/서교동] in the Mapo District [Mapo-gu/마포구]. Before Café Jauindle [카페 자유인들] moved into this location, the building housed Stalight Café [스타라이트] from 2015 until 2019 and before that and until 2015, it was Semo Café [카페 세모].

Café Jauindle offers the usual coffee, tea and beer and wine, or “barley drinks and friends” (as advertised on the menu), as well as bakery goods with hot food at night. The second floor is very quirky, with many blogs mentioning the “antique and medieval” styled furniture. This floor is available for hire and has been used for private parties, commercial photoshoots, music video and promotional filming and dramas. Hire starts at 50,000w per hour, with a 2 hour minimum.