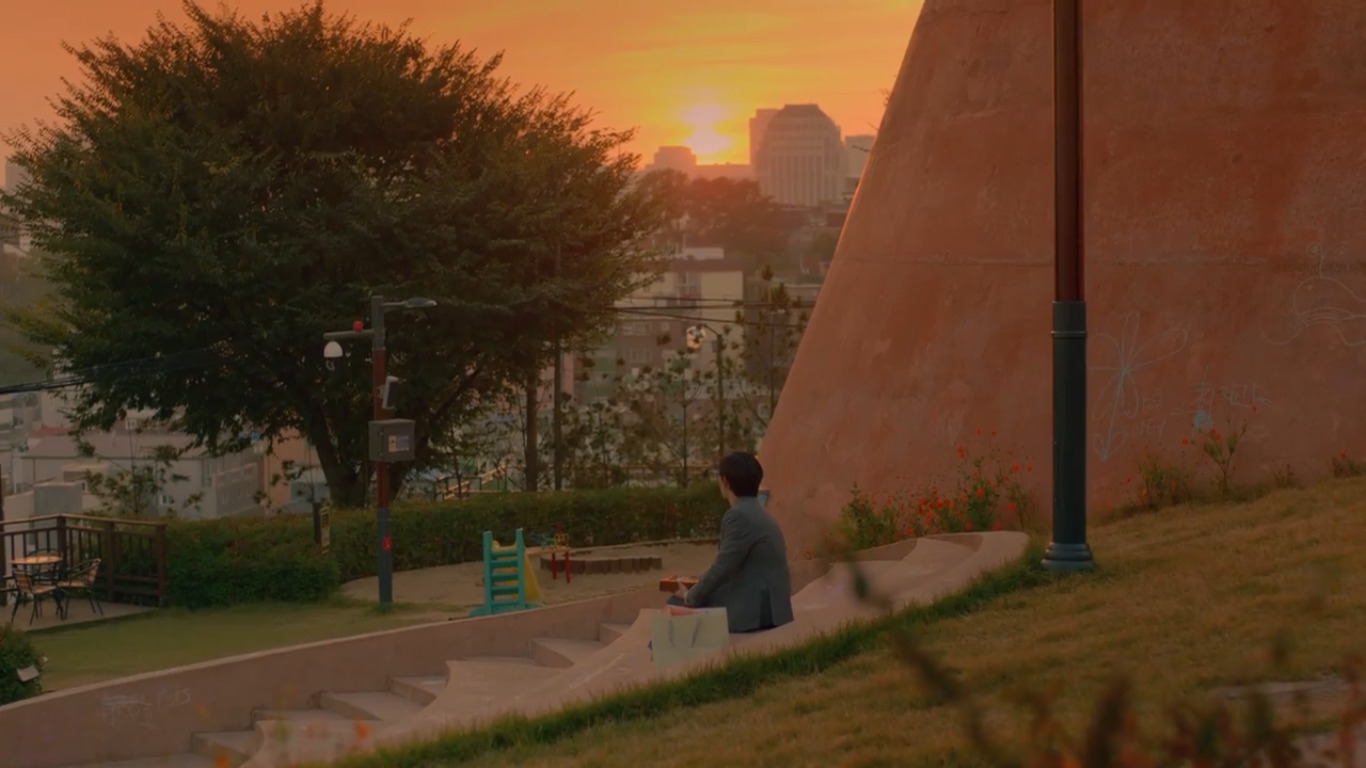 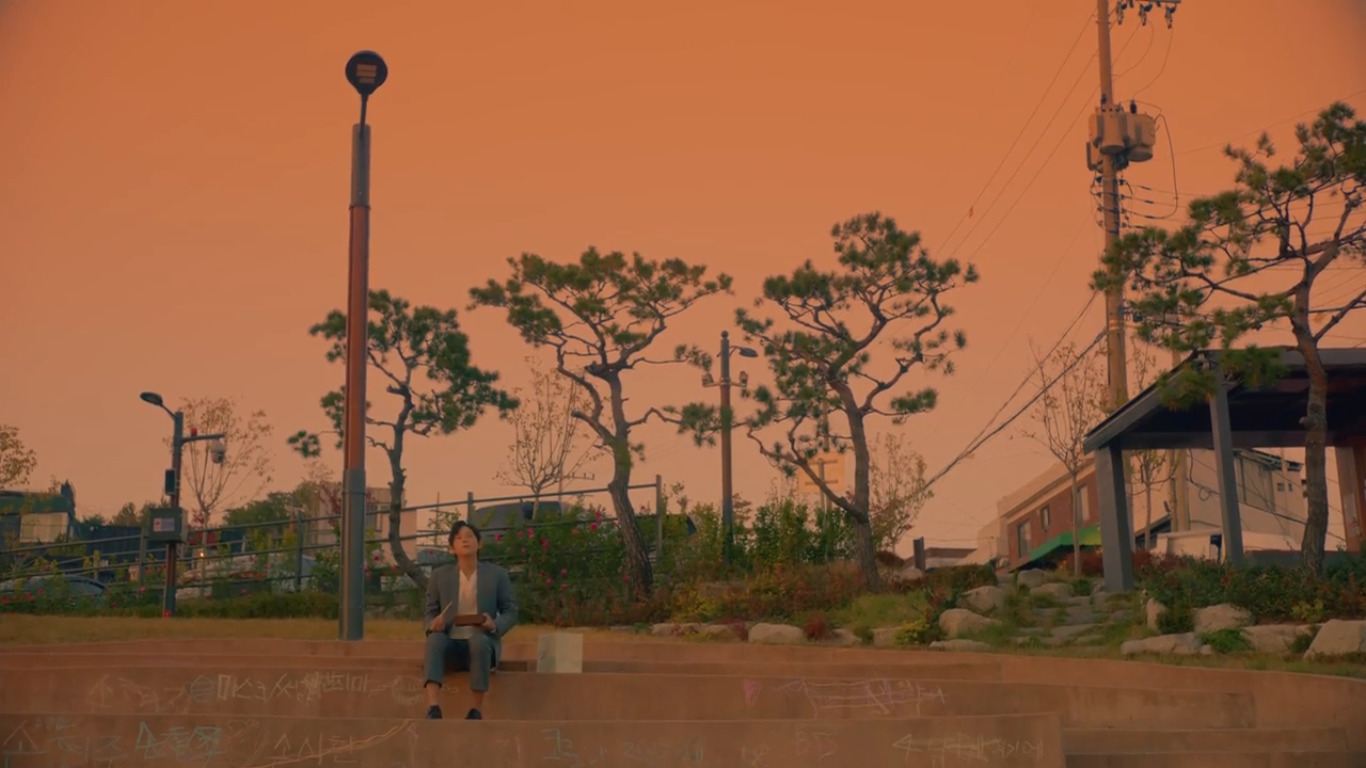 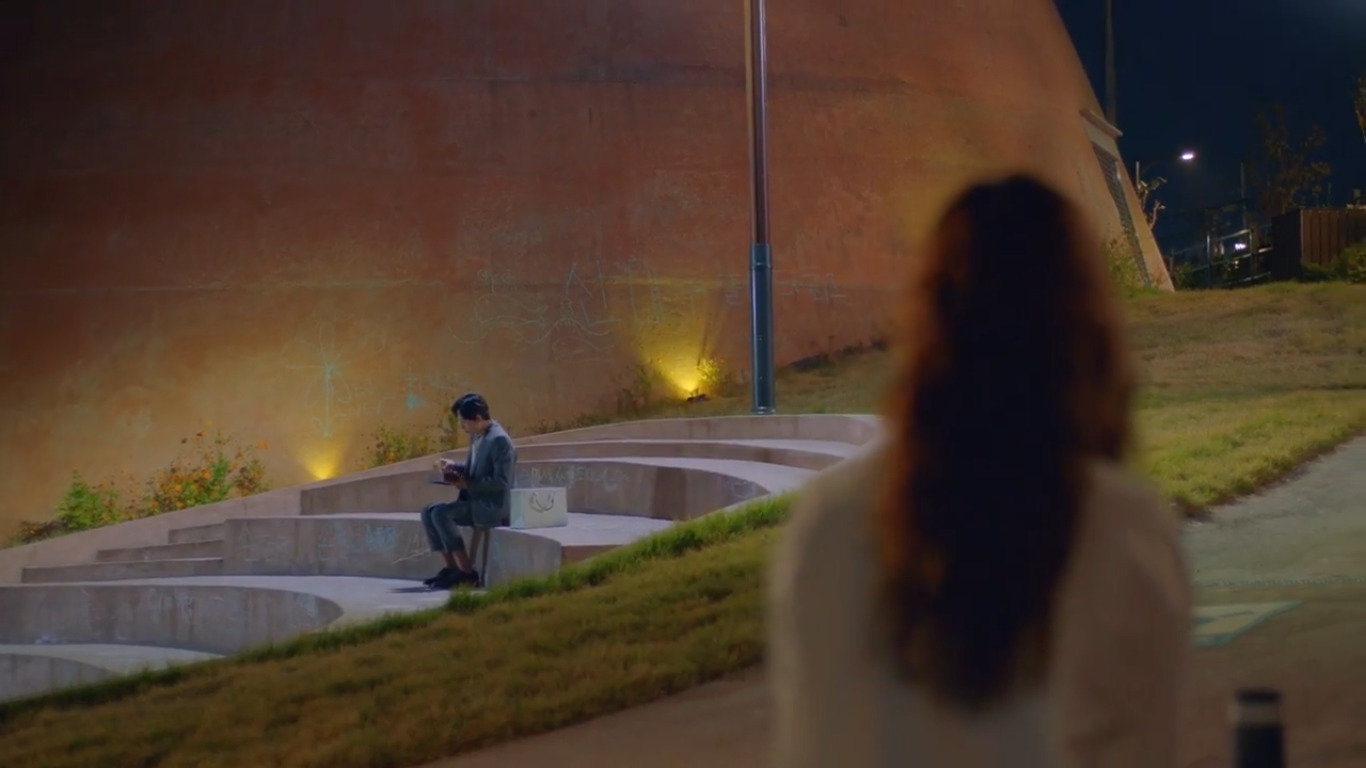 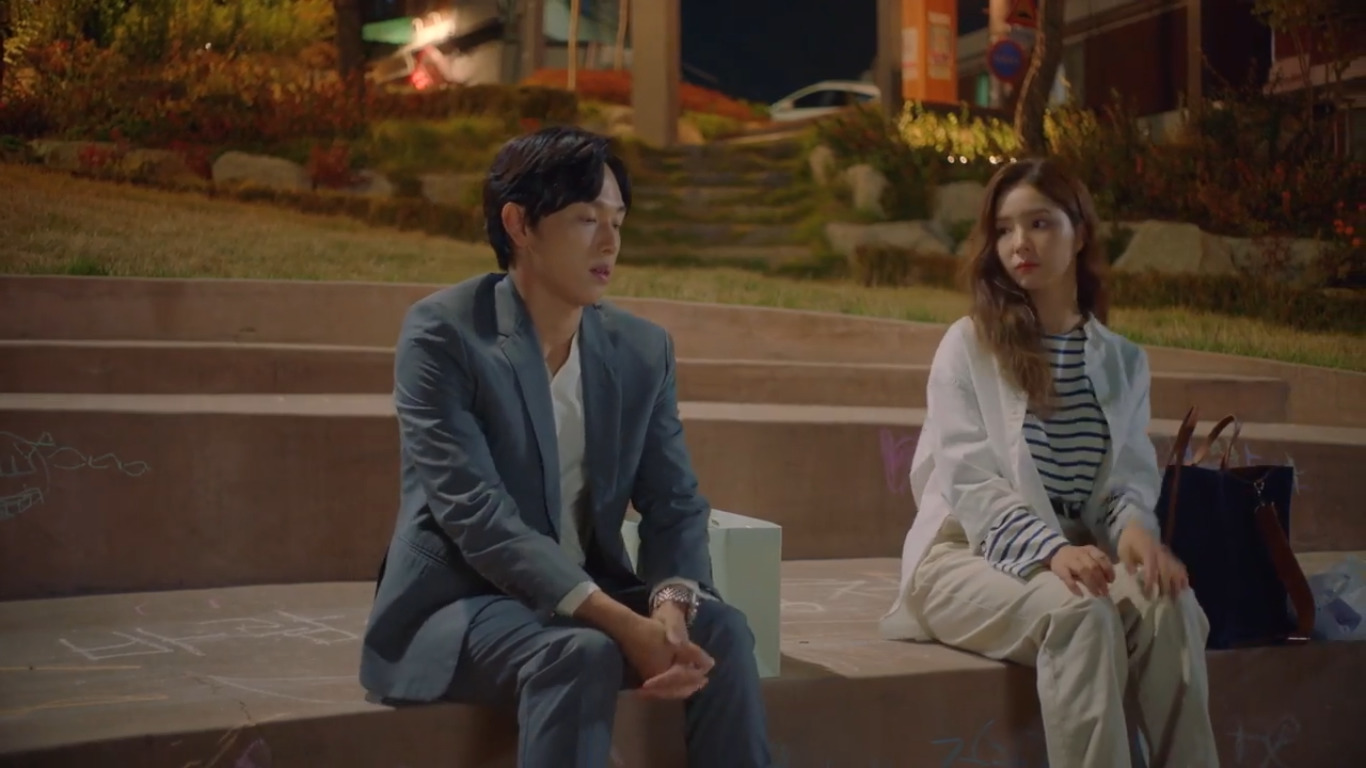 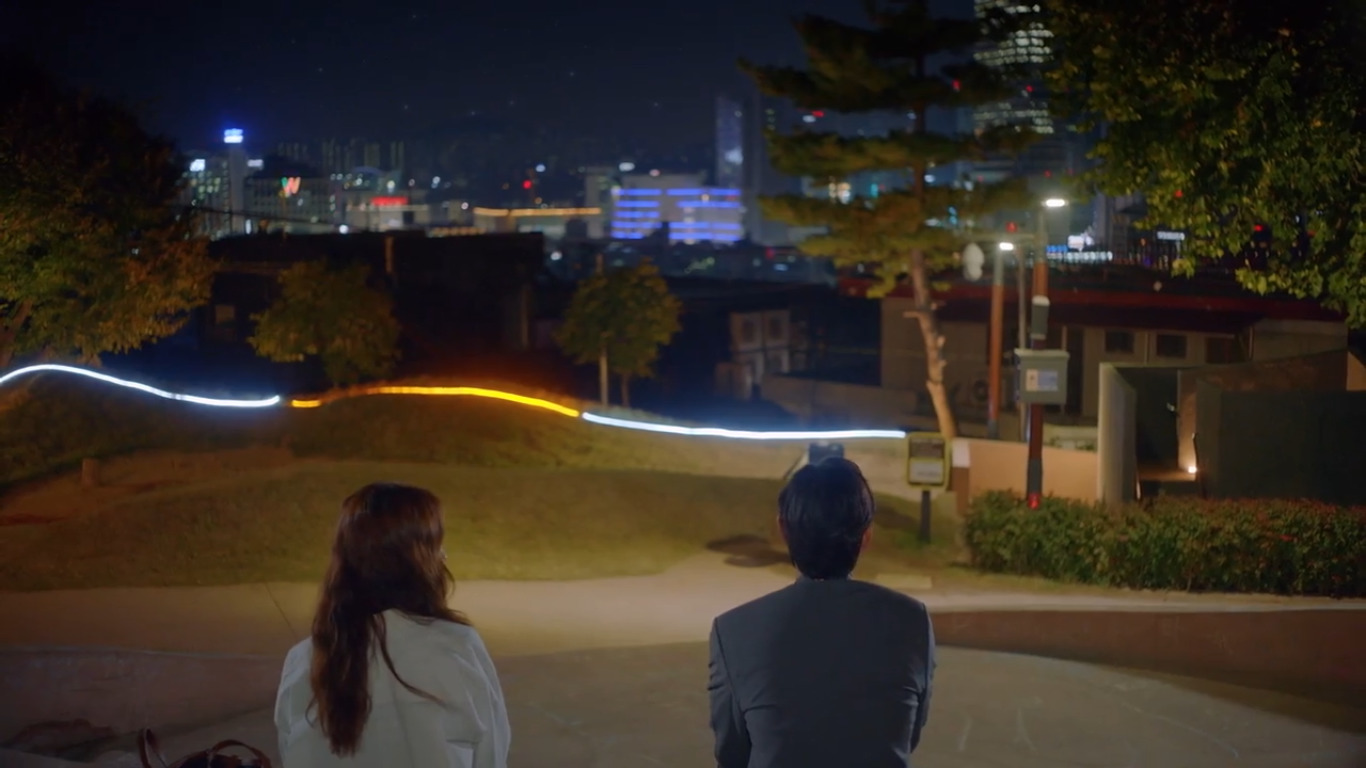 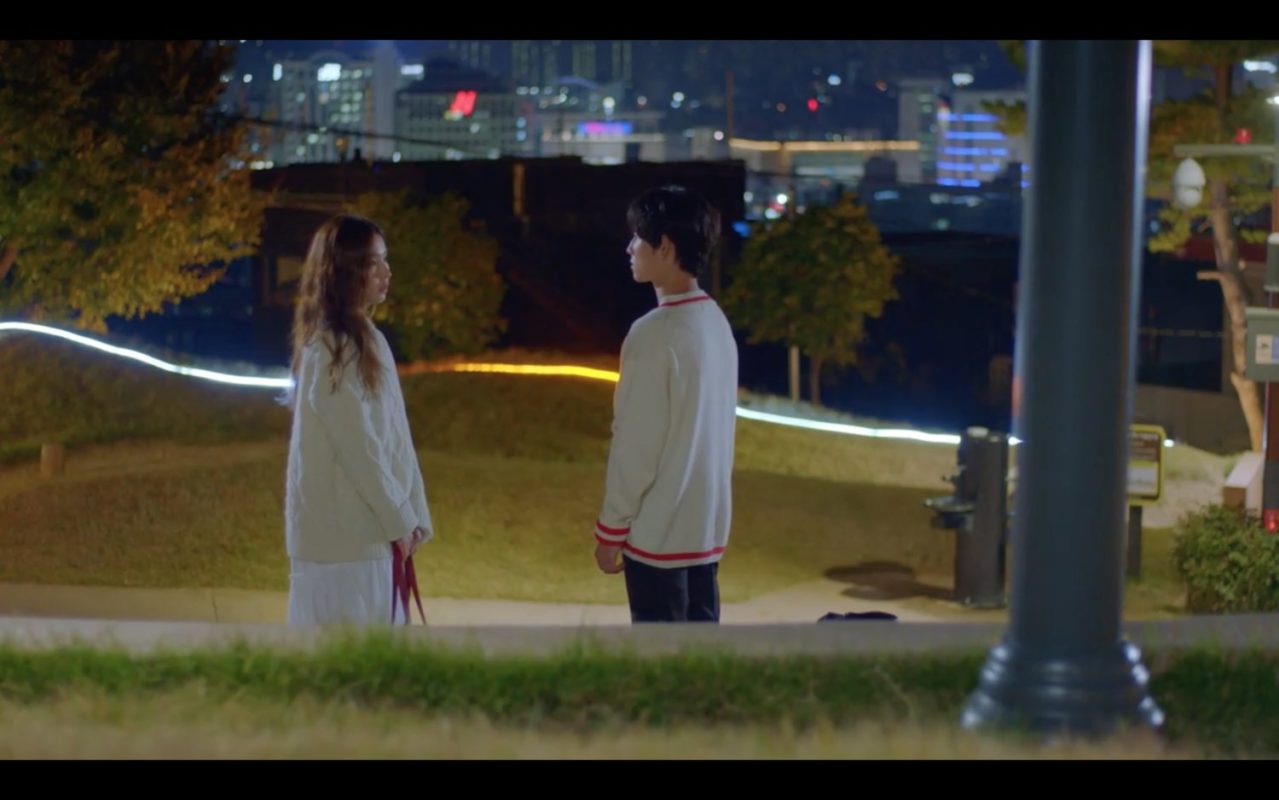 After a painful family lunch and photo shoot in episode 3 of Run On (런온) (JTBC/Netflix, 2020-21), Ki Seon-gyeom (Im Siwan) leaves after his father throws a wine glass at him, cutting his face. He escapes with a box full of his favorite japchae, but not really knowing where to go, he ends up sitting on steps in this playground in Shin Mi-joo’s (Shin Se-kyung) neighborhood, where she finds him. Mi-joo tends to his cut and Seon-gyeom reciprocates with her paper cut. In episode 6, Seon-gyeom is lurking in the playground again, allegedly looking out for that mugger May (Lee Bong-ryun) invented to persuade him to stay at their house.

Sanmaru Playground [산마루 놀이터], originally a quarry on the side of a mountain, is an eco-friendly natural children’s playground that is part of the urban regeneration of Seoul’s neighborhood Changsin [Changsin-dong/창신동] in the Jongno District [Jongno-gu/종로구]. It was opened on 2 May 2019 at a cost of US$2.45 million, after almost two years of development. Sanmaru translates to “ridgetop”, as the playground is situated high along a ridge.

Designed by Jo Jinman Architects [조진만 건축사사무소], who won a design competition for the project, this children’s playground was created to provide “a way for children to interact with the soil, not play equipment, and to create new games” according to their website. It incorporates a large red clay “Pulmu Thimble” (Bellows Thimble – 풀무골무), which pays homage to the area’s long history of the local sewing industry, especially in the difficult years after the Korean War, when many women sewed as a means to earn money for their families. Outside the Thimble is a red clay performance hall, as well as sandpits and play discovery areas. The inside is decorated with spools of thread and houses a children’s library (with over 1000 books), a multi-use centre for activities and classes, and a 9-meter high jungle gym playground. Circular stairs lead to the top observation level to the wonderful views of the Naksan section of the fortress wall and Seoul lights.

Getting here
Dongdaemun Station [동대문역], Seoul Subway Line 1 or 4, Exit 1.
(9 mins. walk, prepare for a bit of an uphill walk!)

The Playground is open 24 hours, but these hours refer to the Pulmu Thimble building: Monday – closed Tuesday – Sunday 9am – 6pm Closed on National holidays ----------------------------- Note: The Playground is currently closed to all except local children from Dec 2020 until further notice, due to COVID 2.5 regulations. Check the Facebook page for accessibility before visiting.
Don`t copy text!