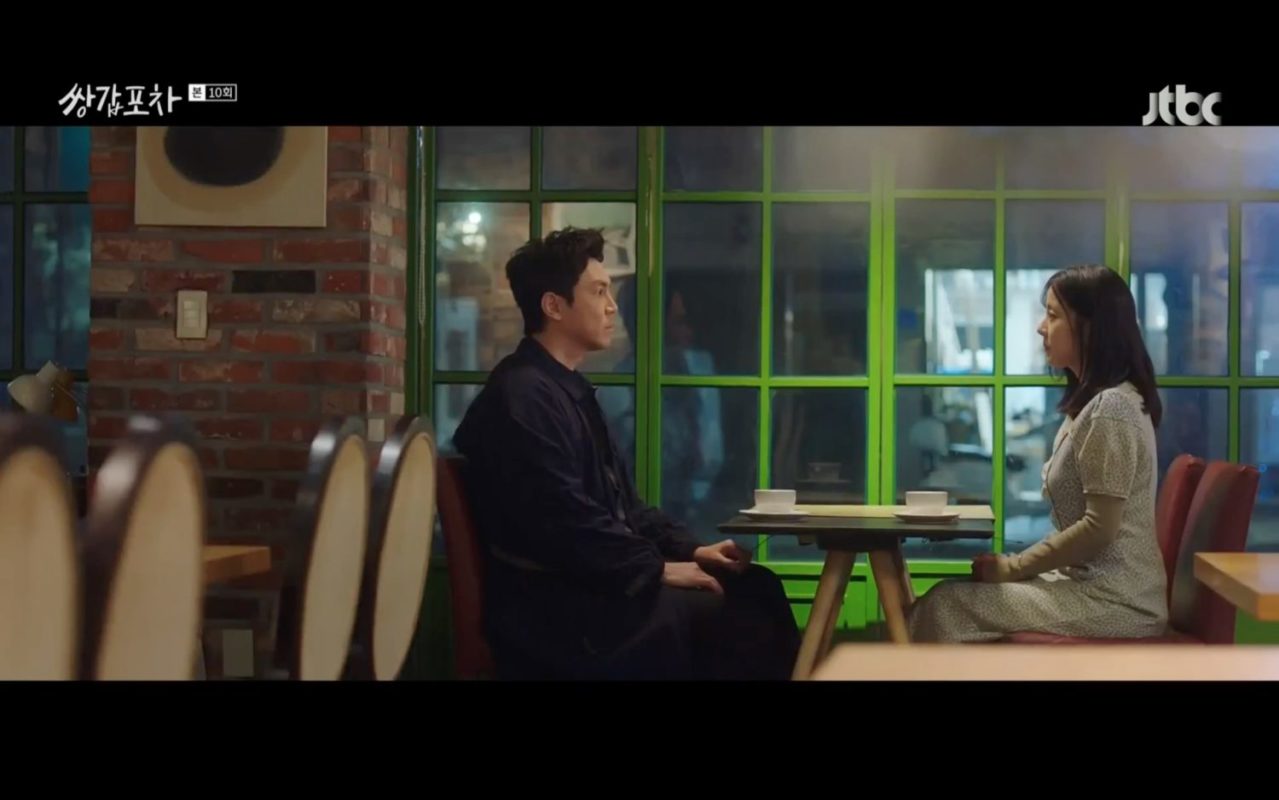 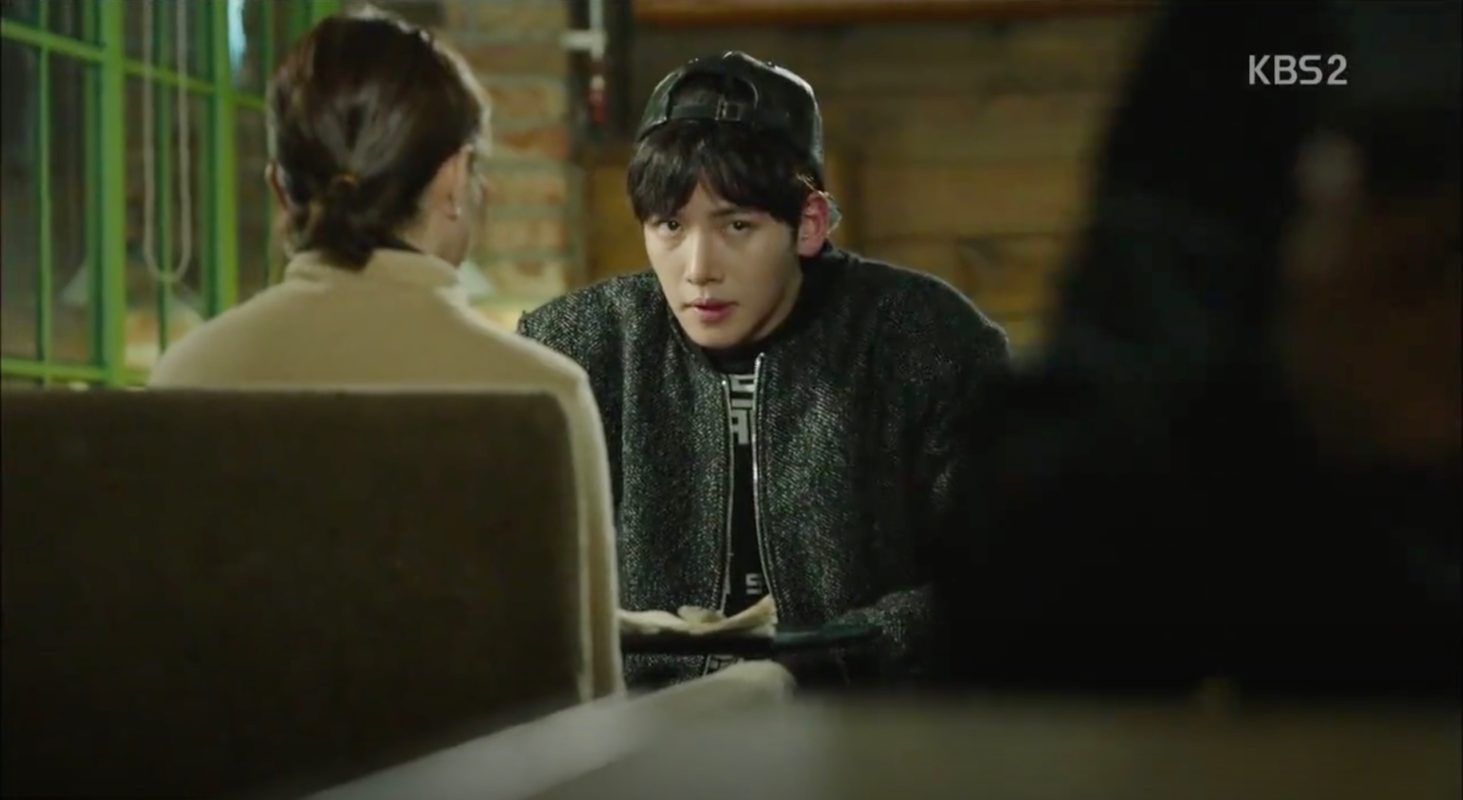 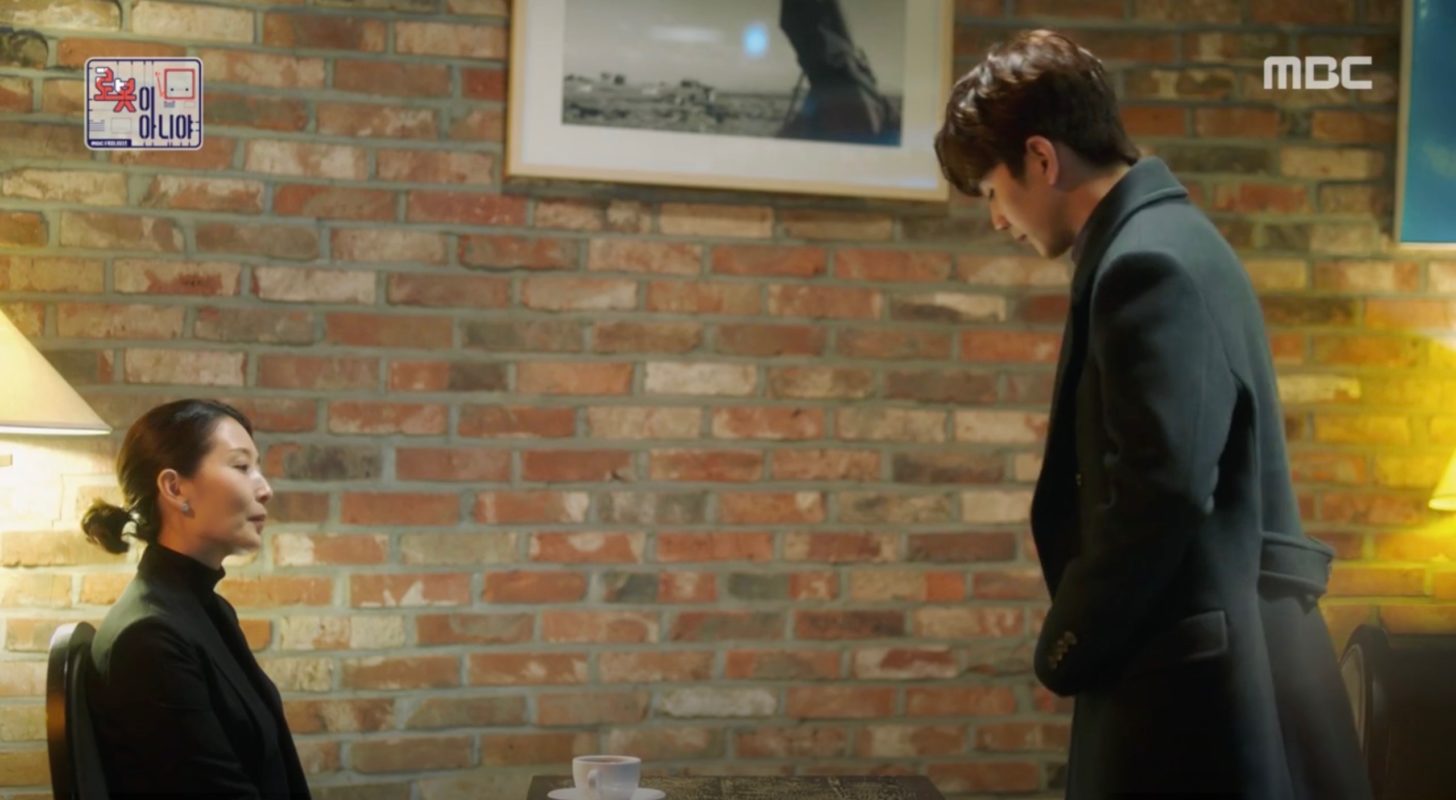 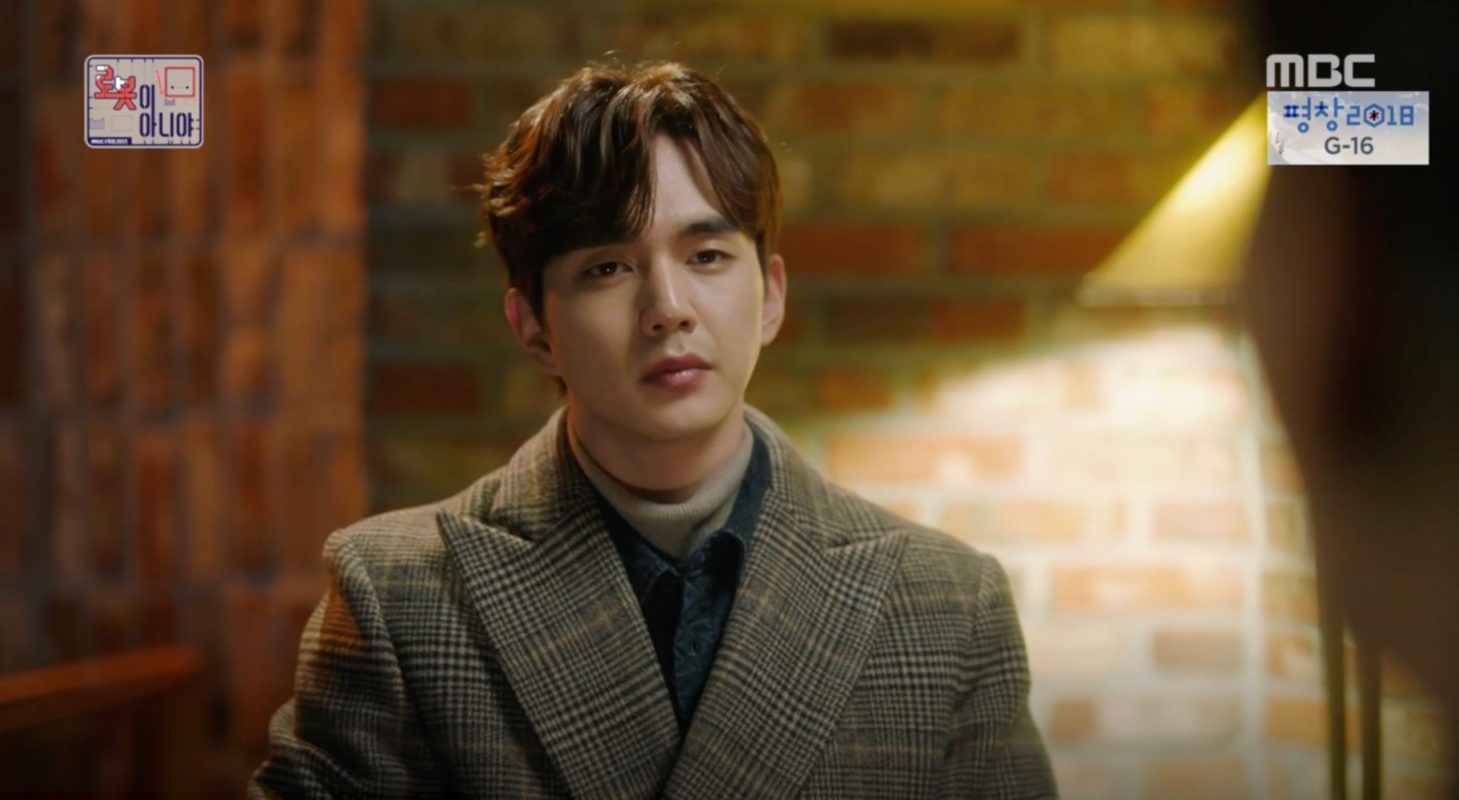 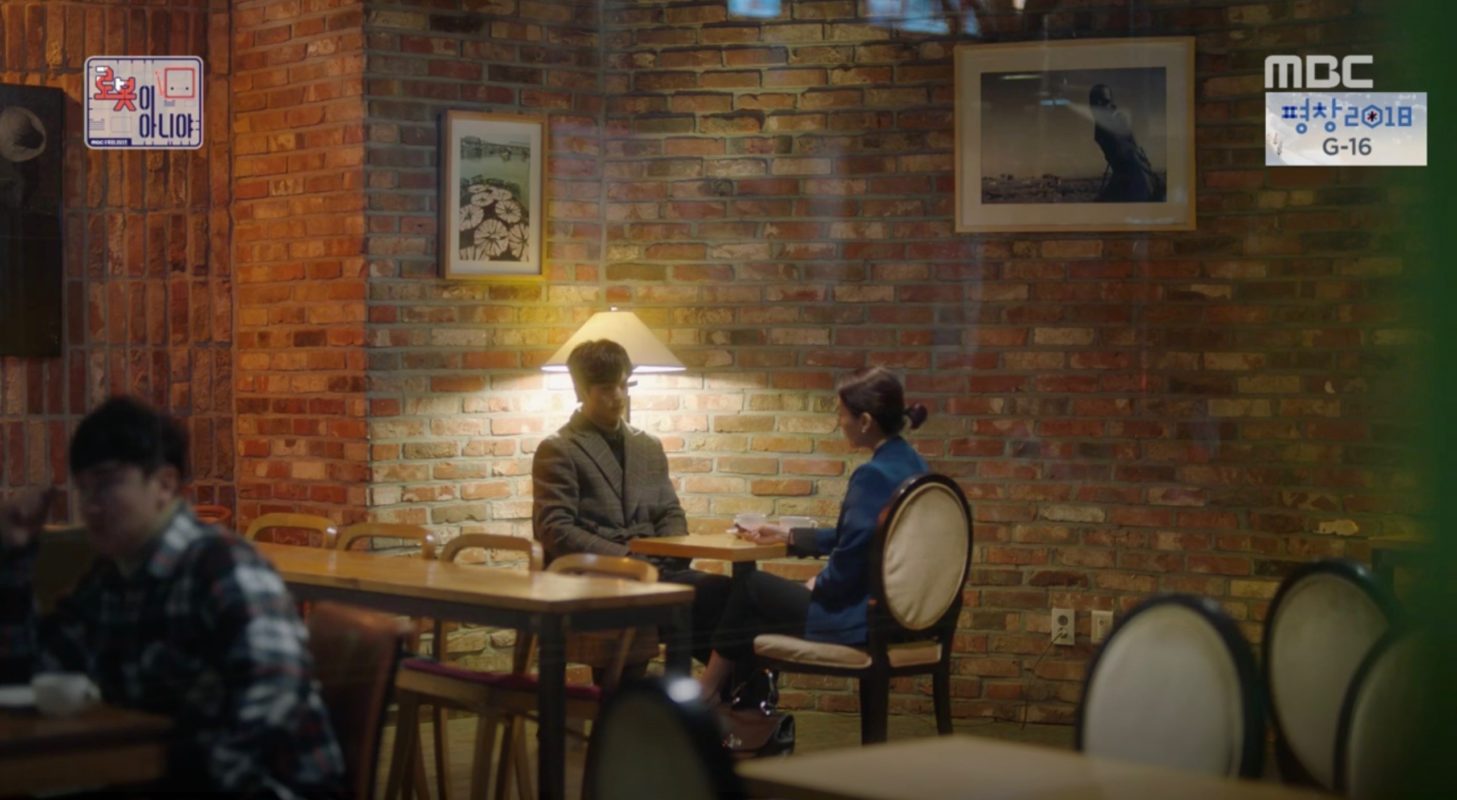 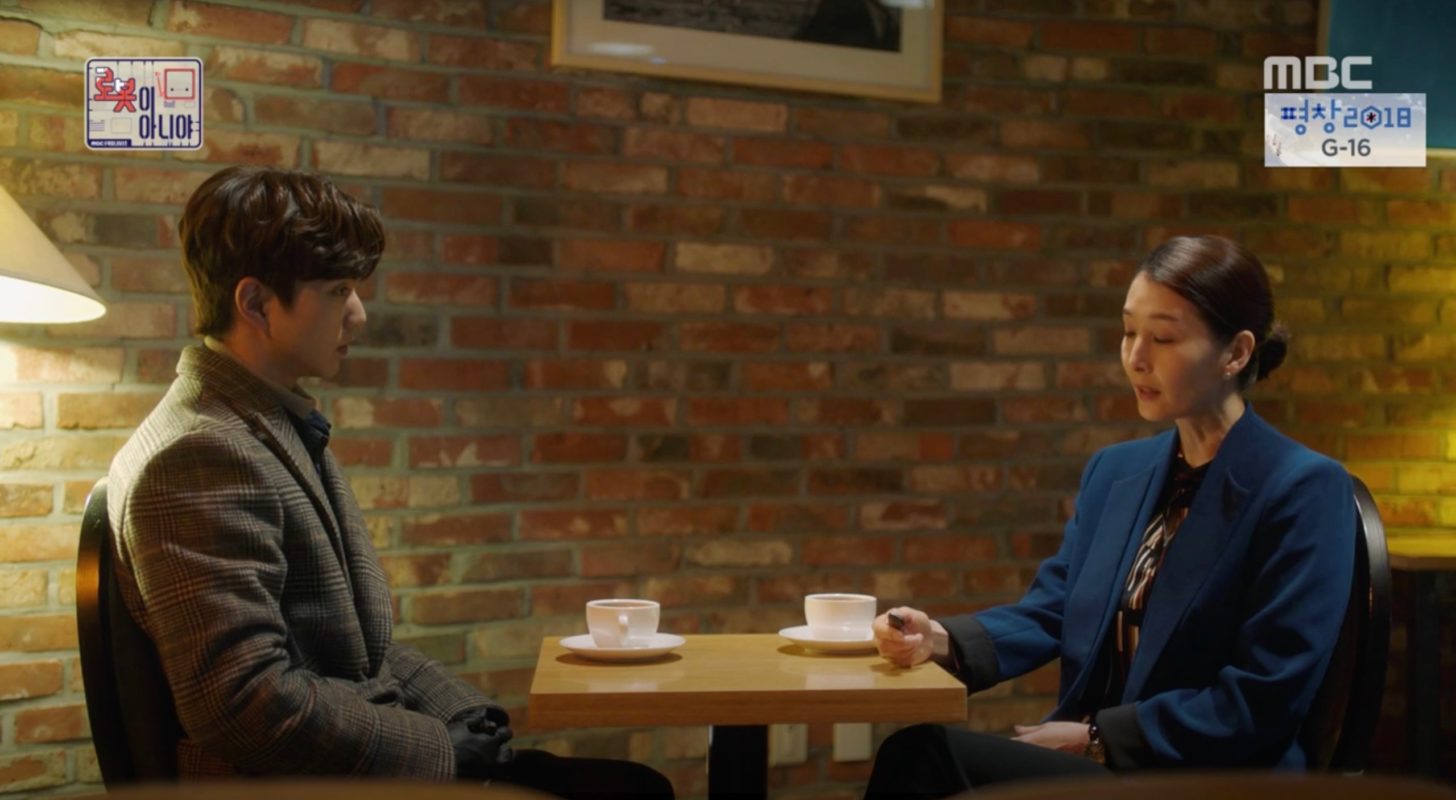 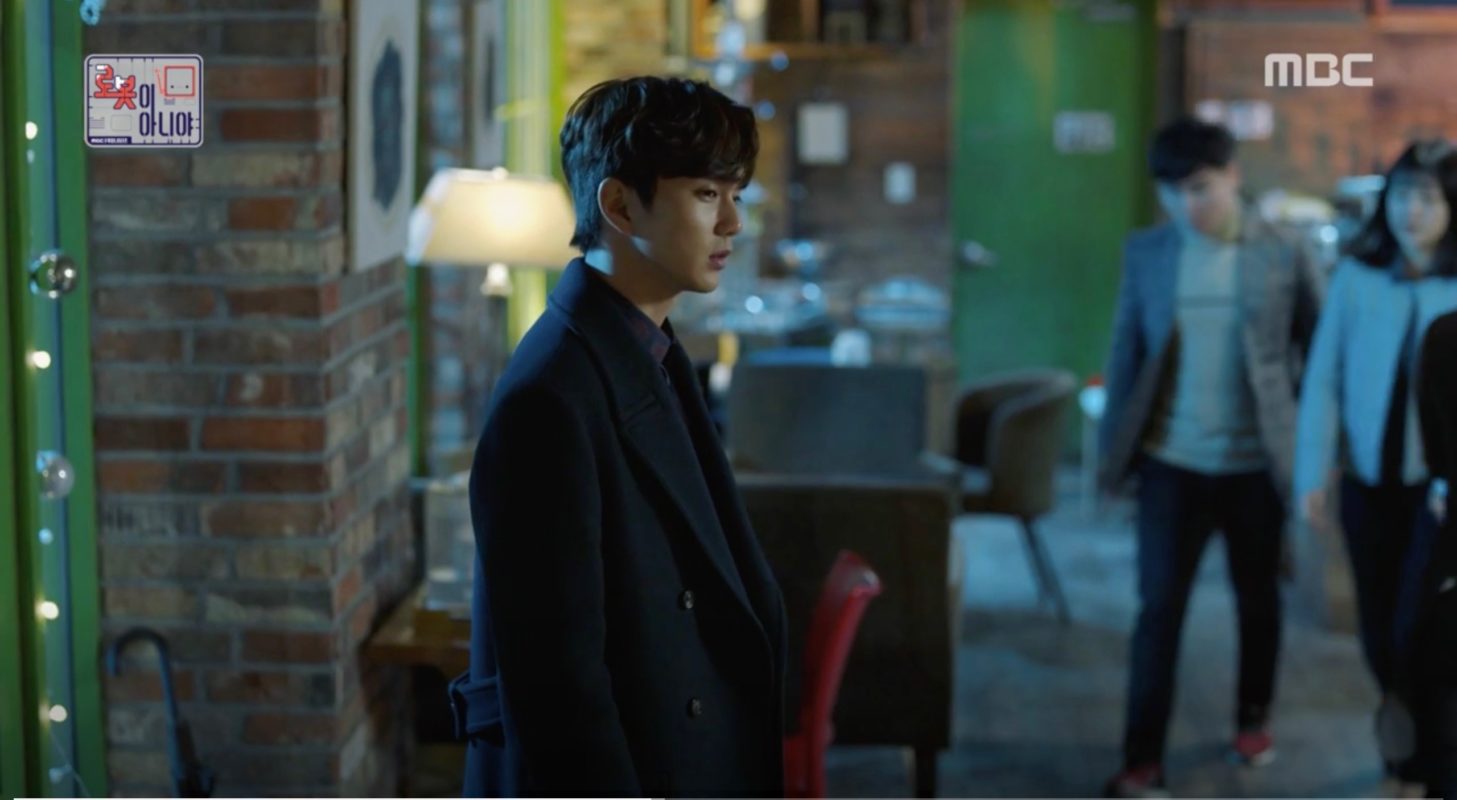 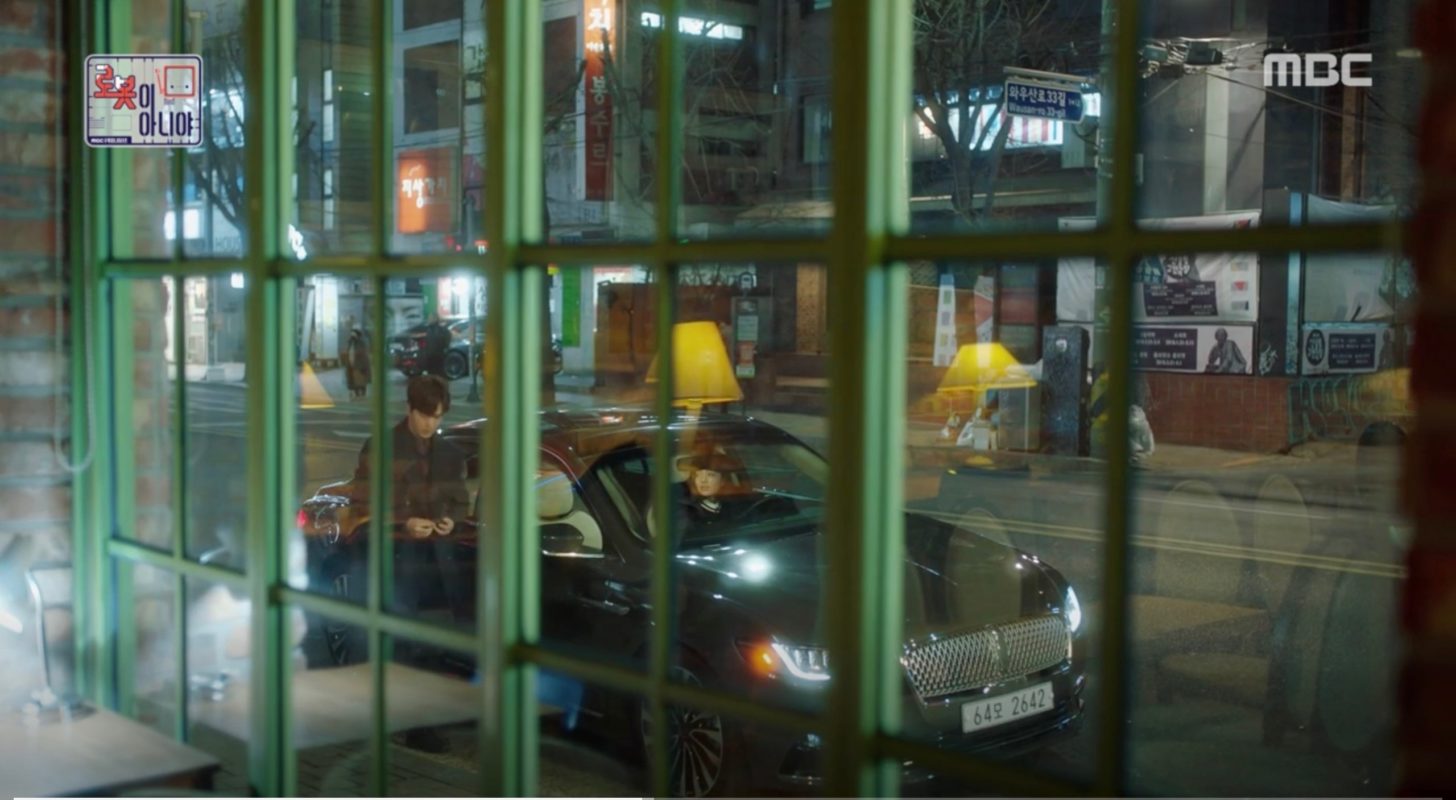 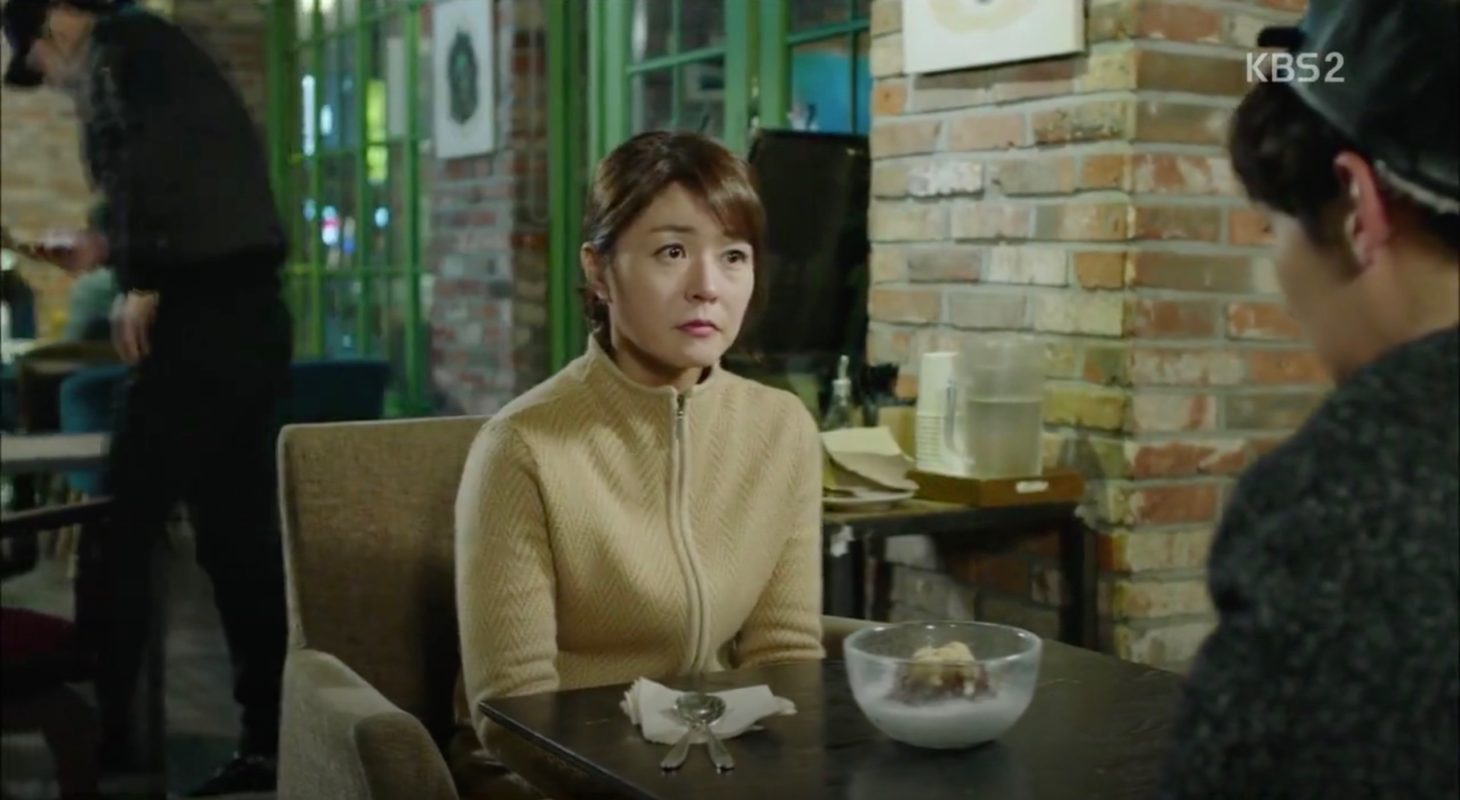 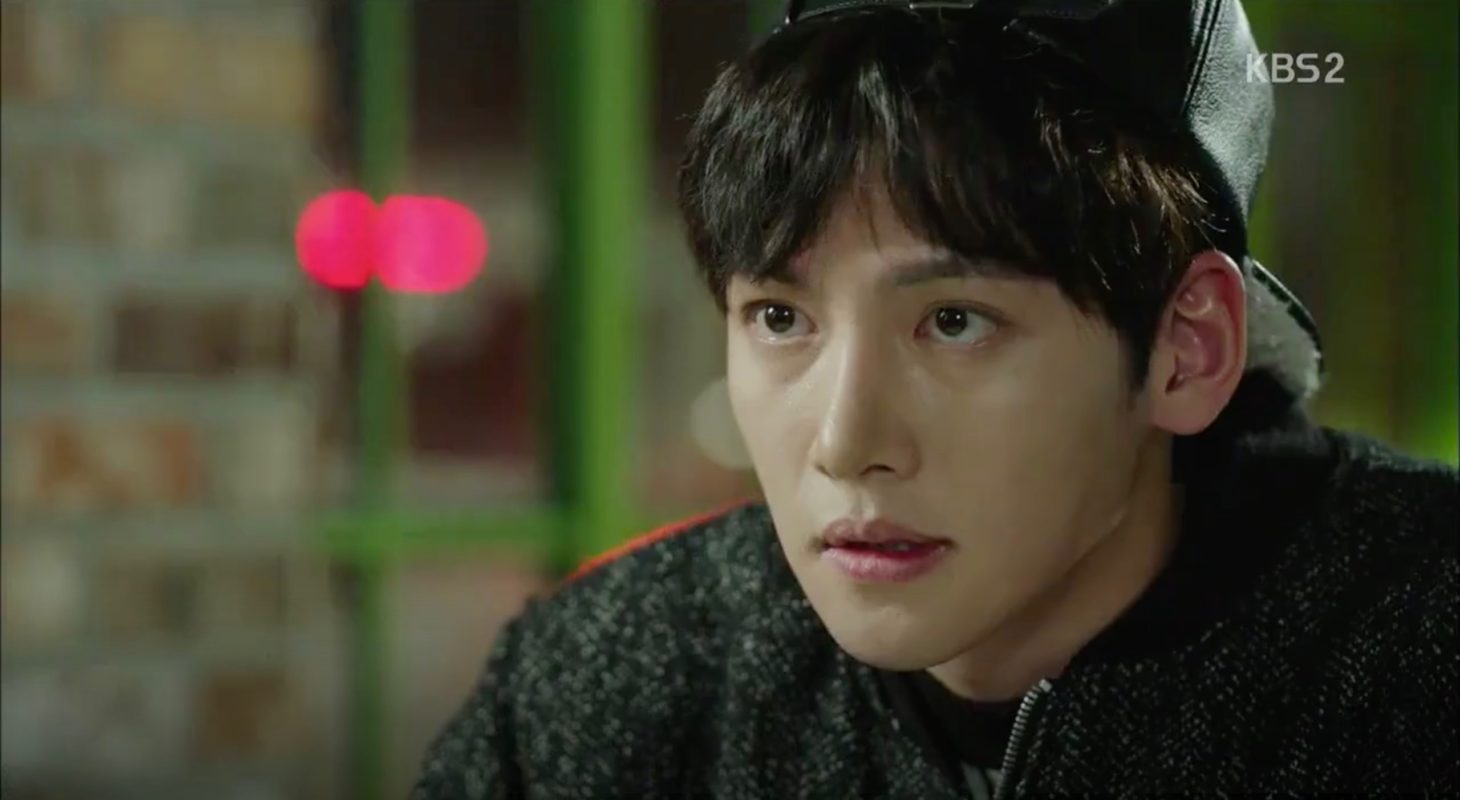 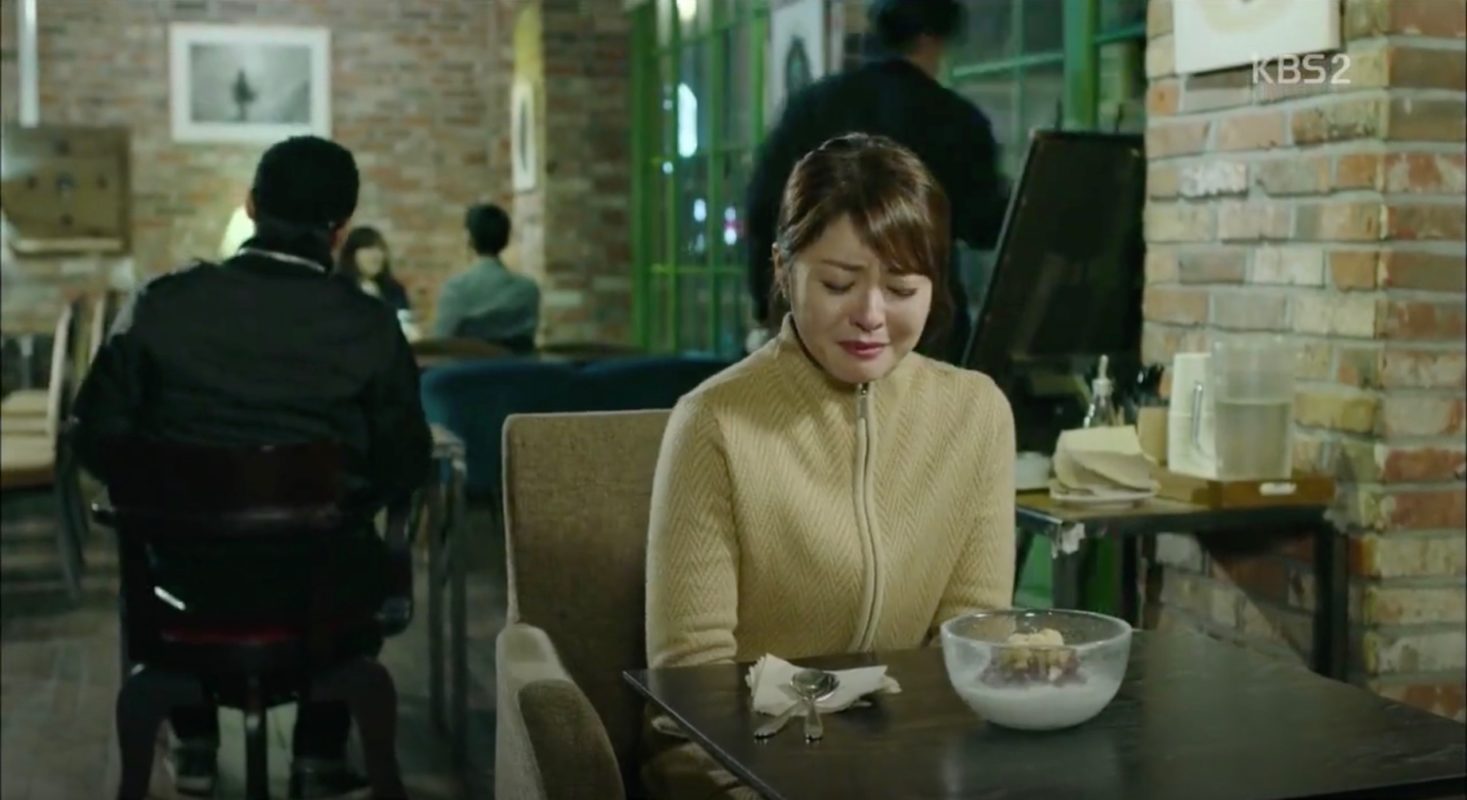 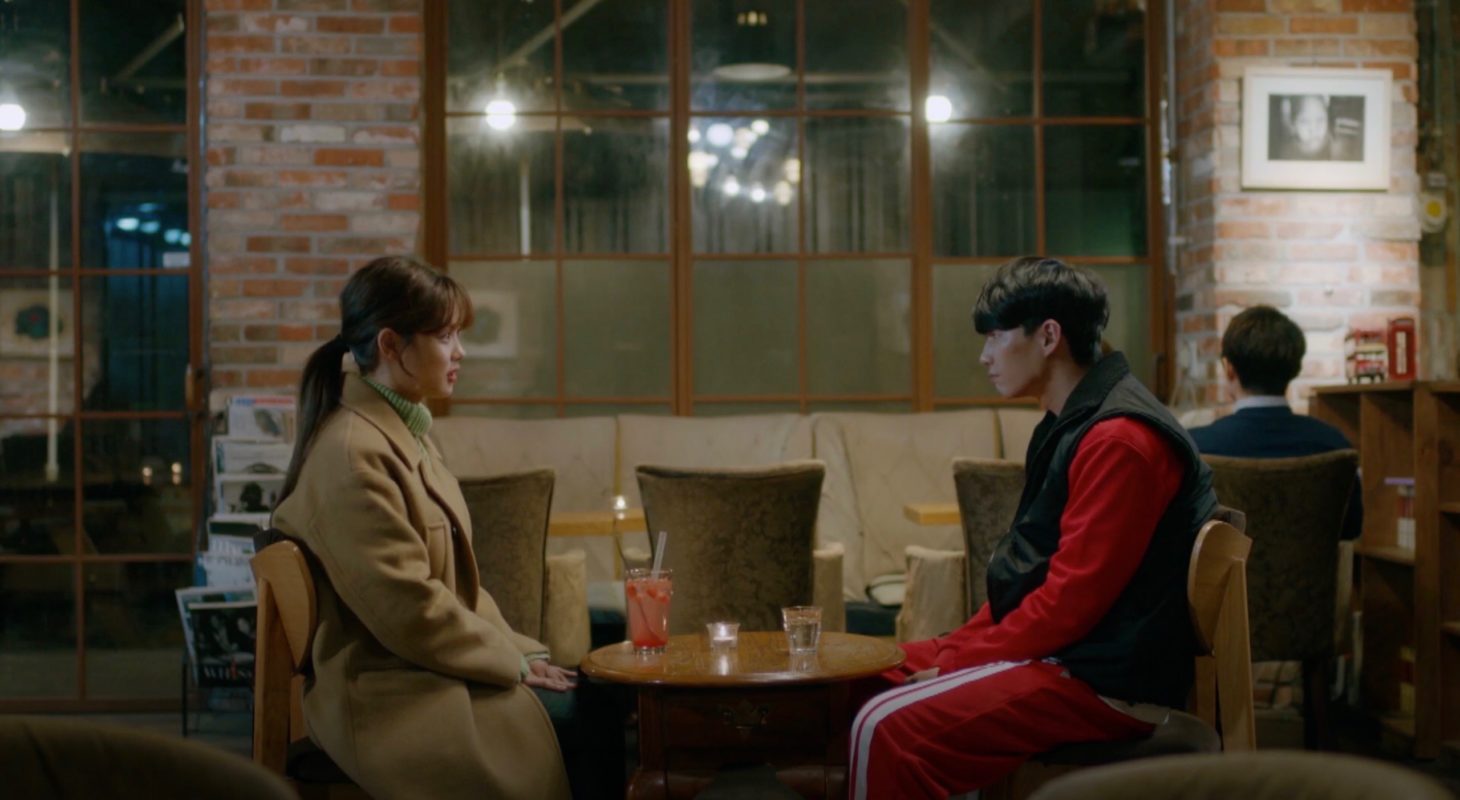 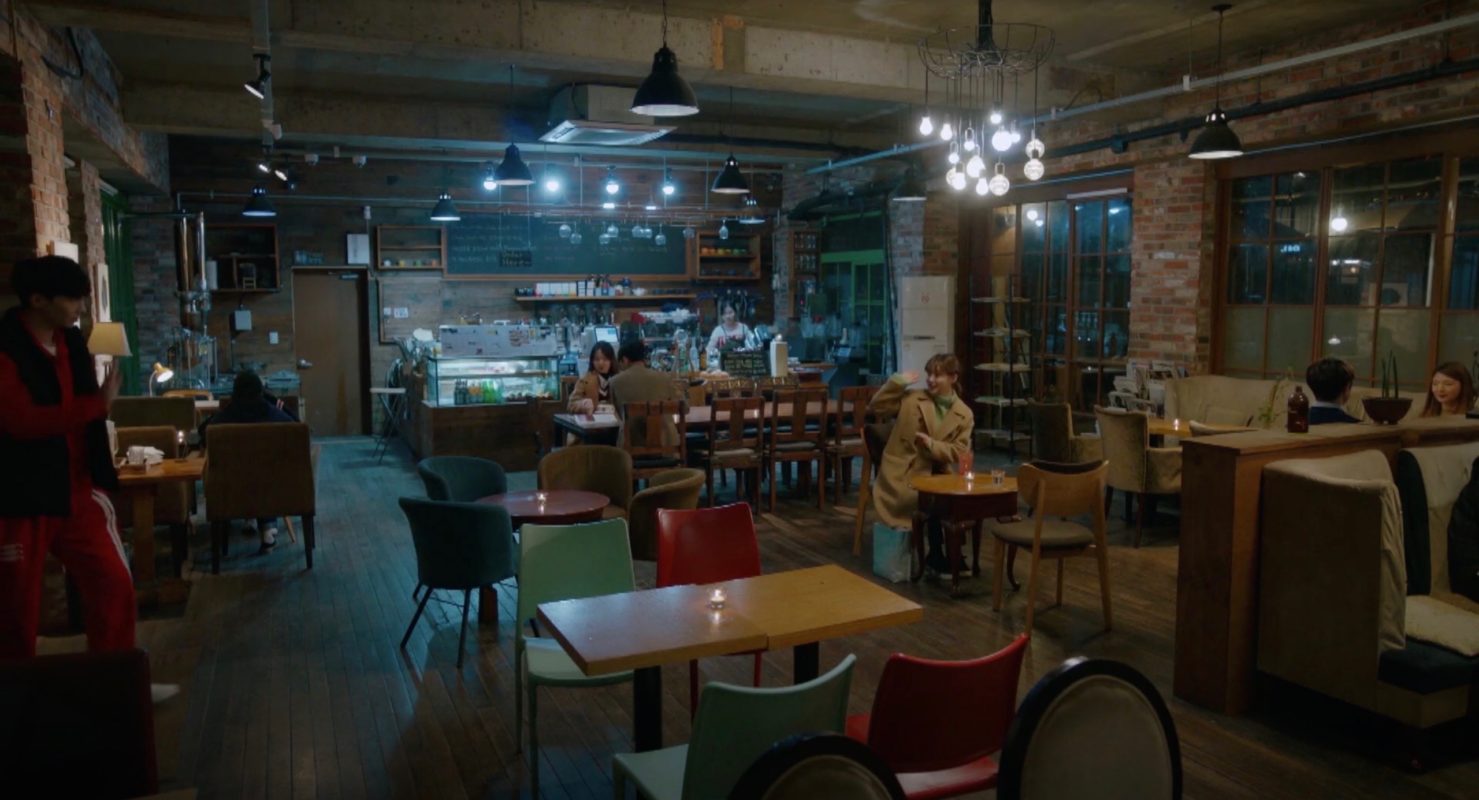 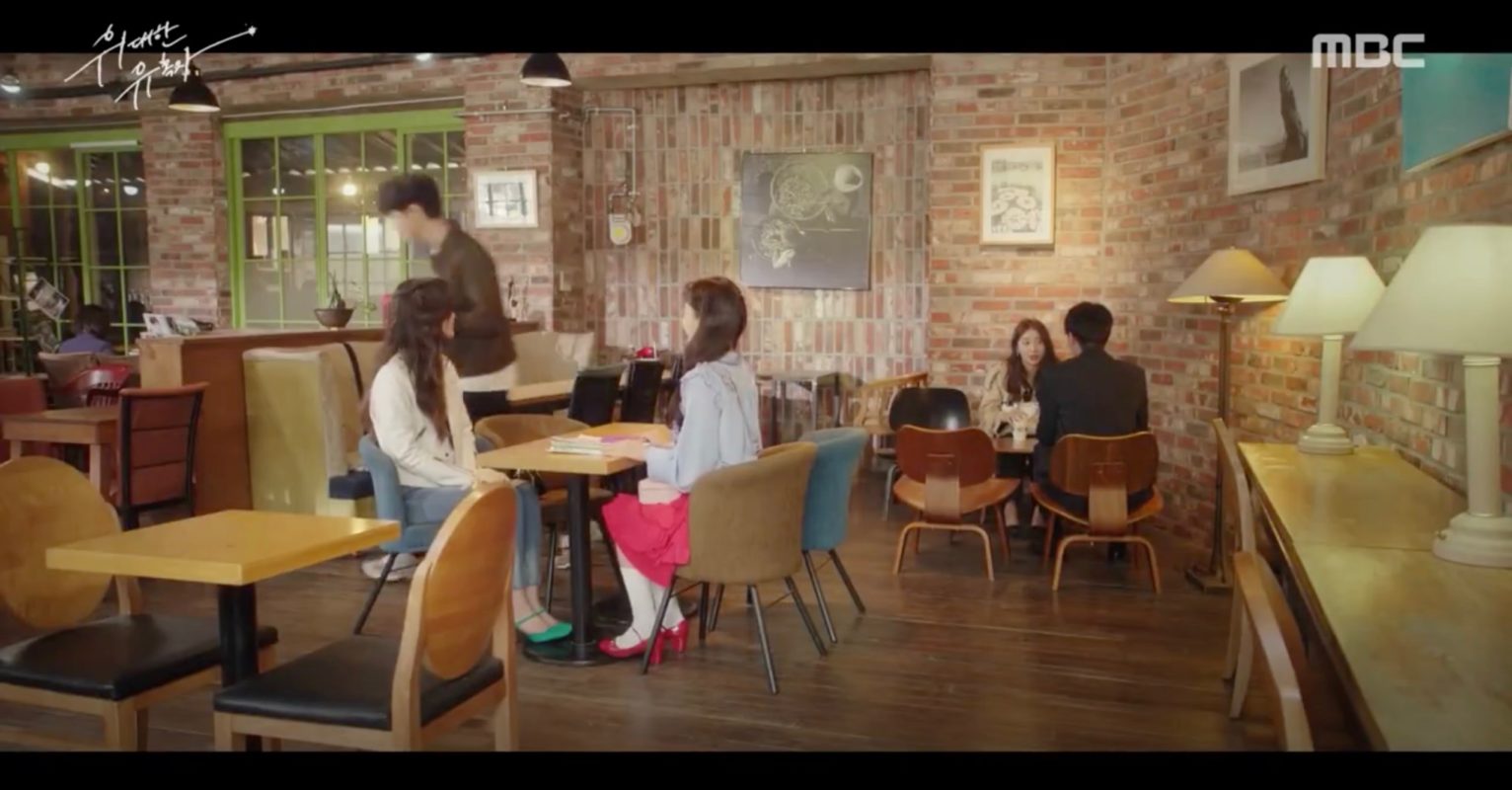 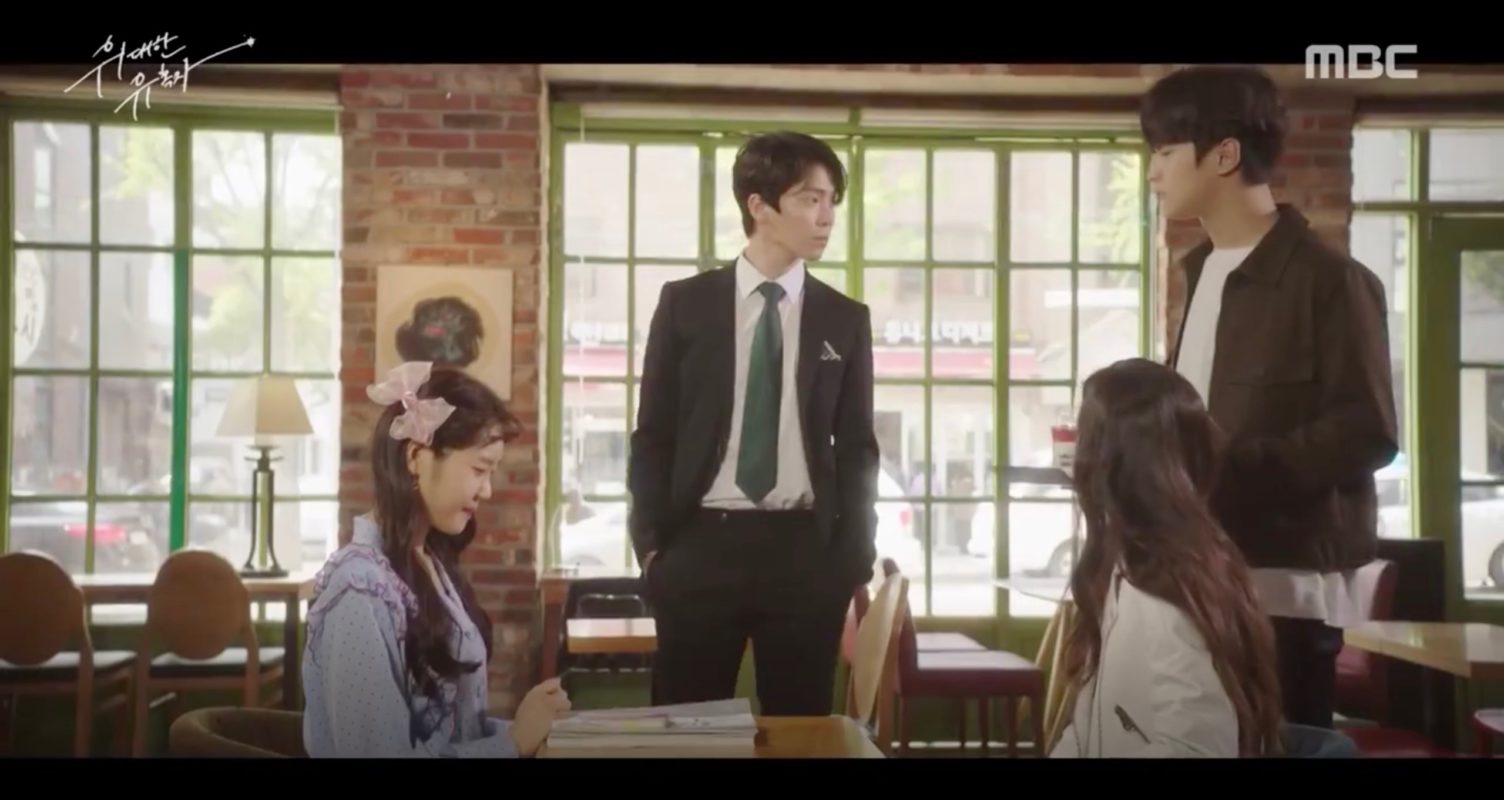 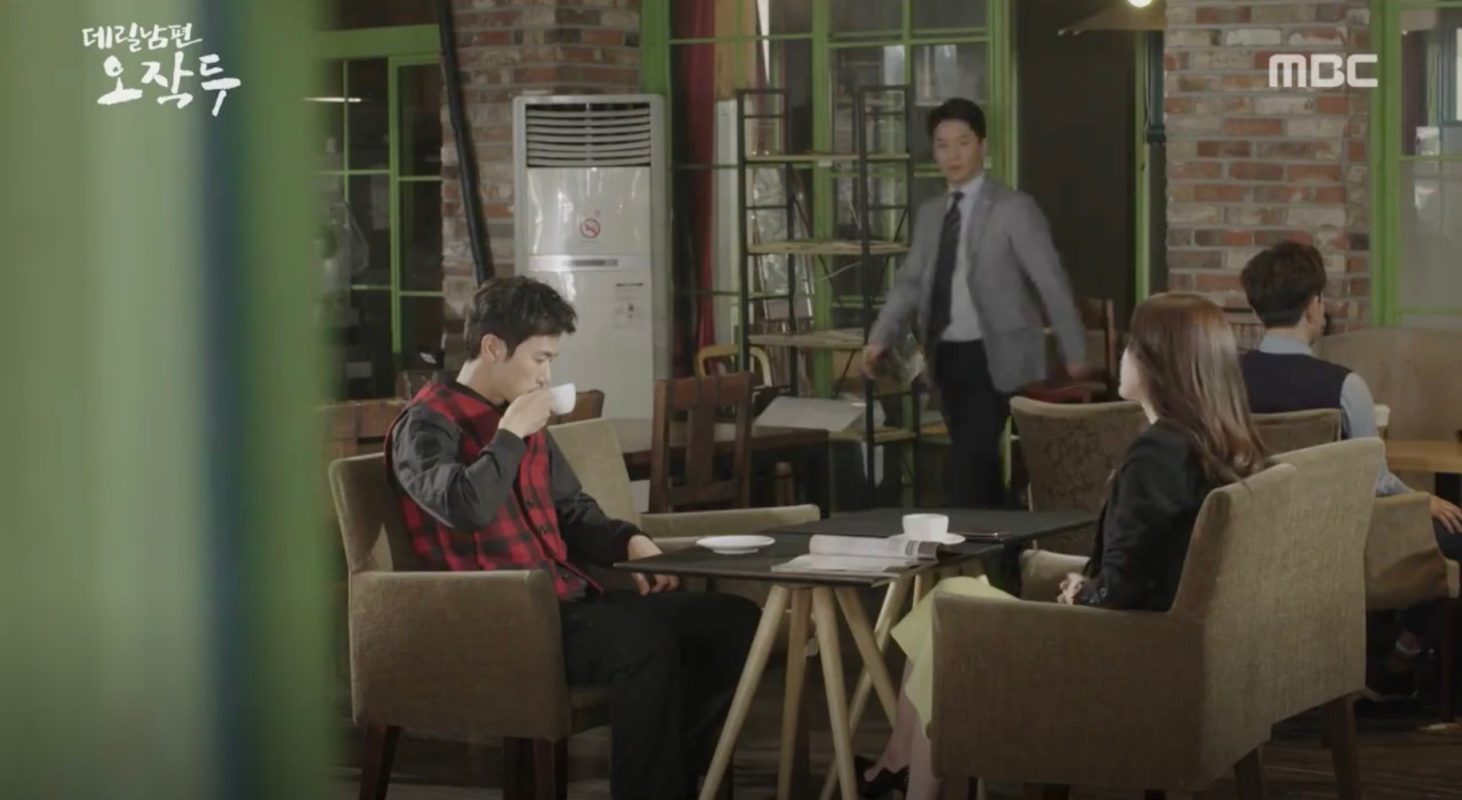 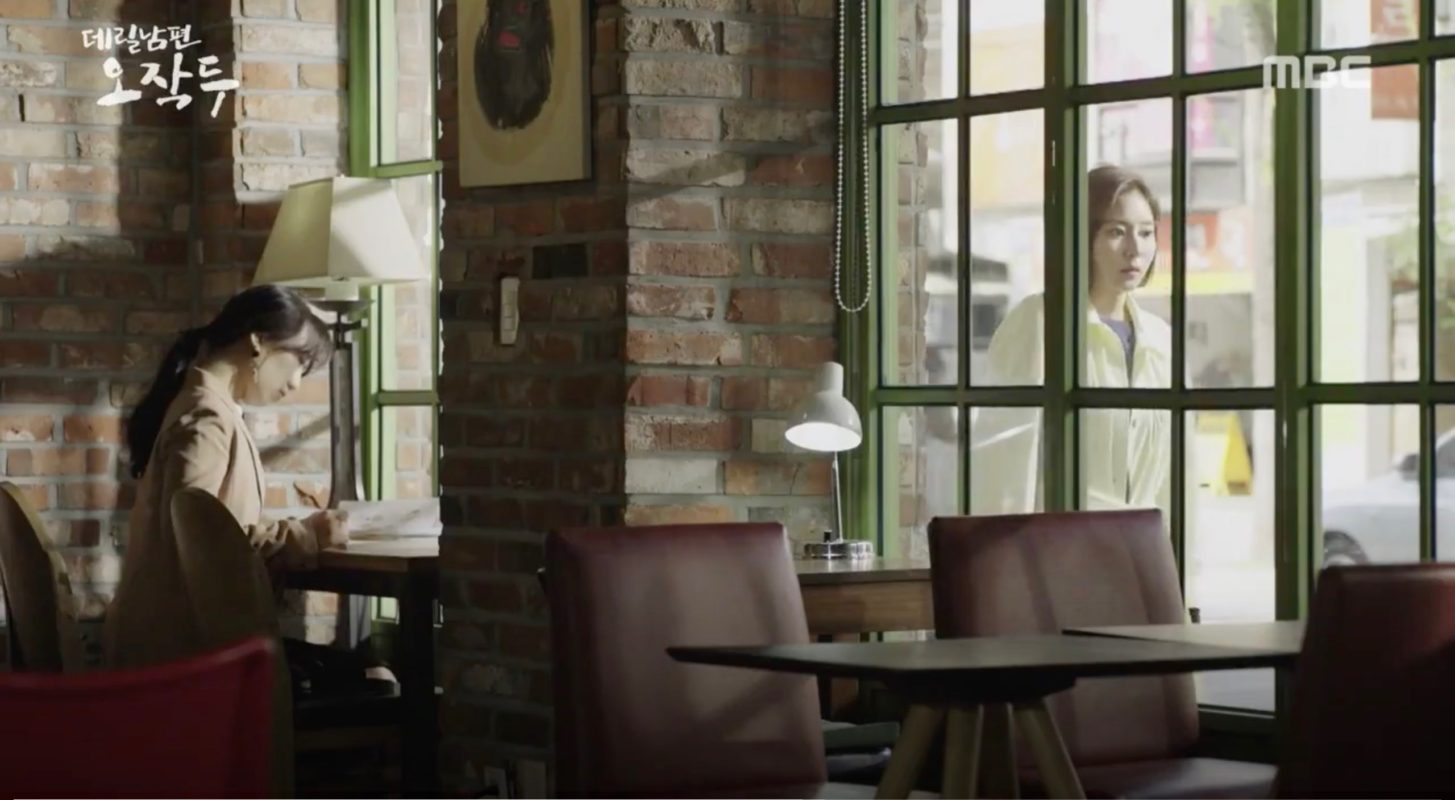 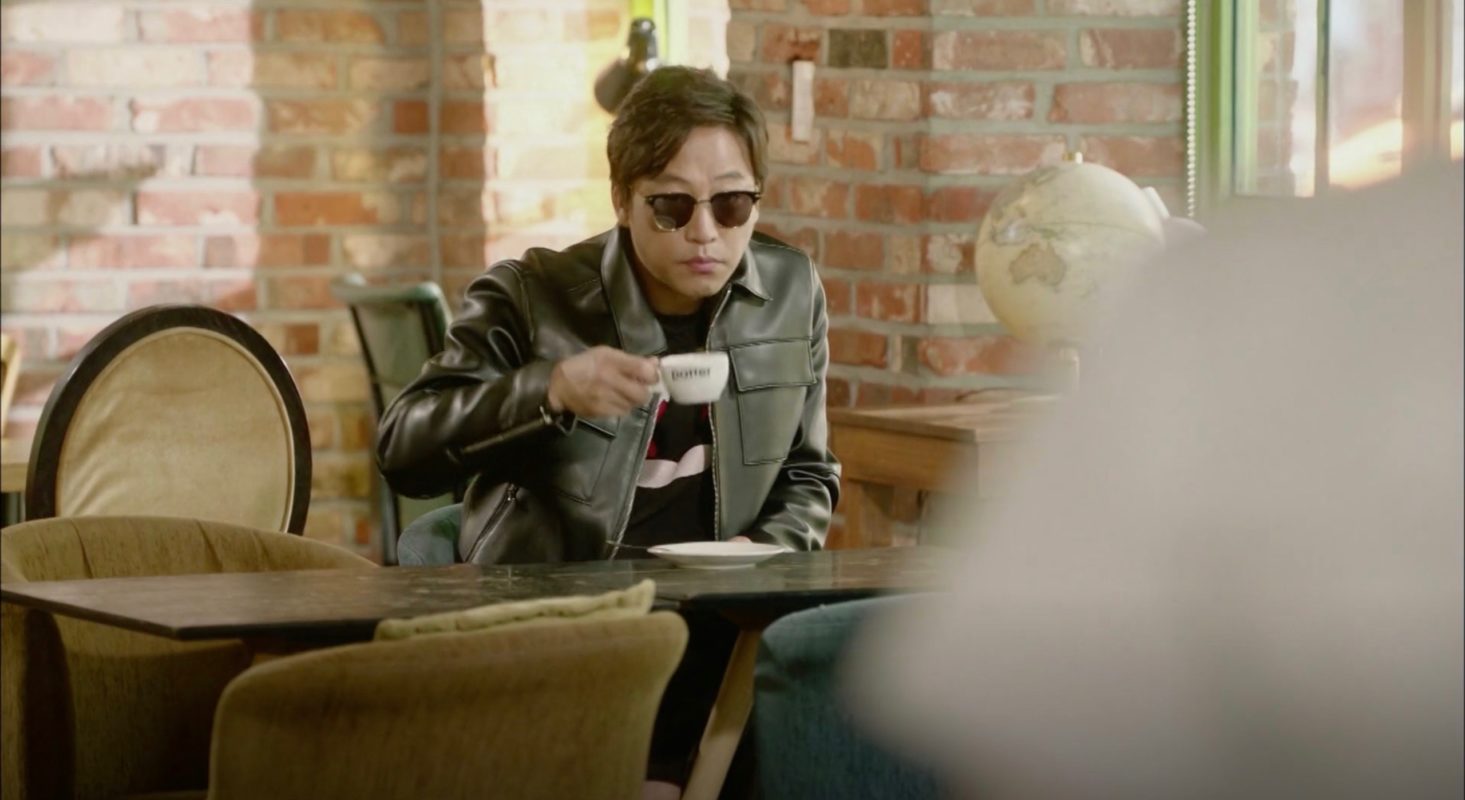 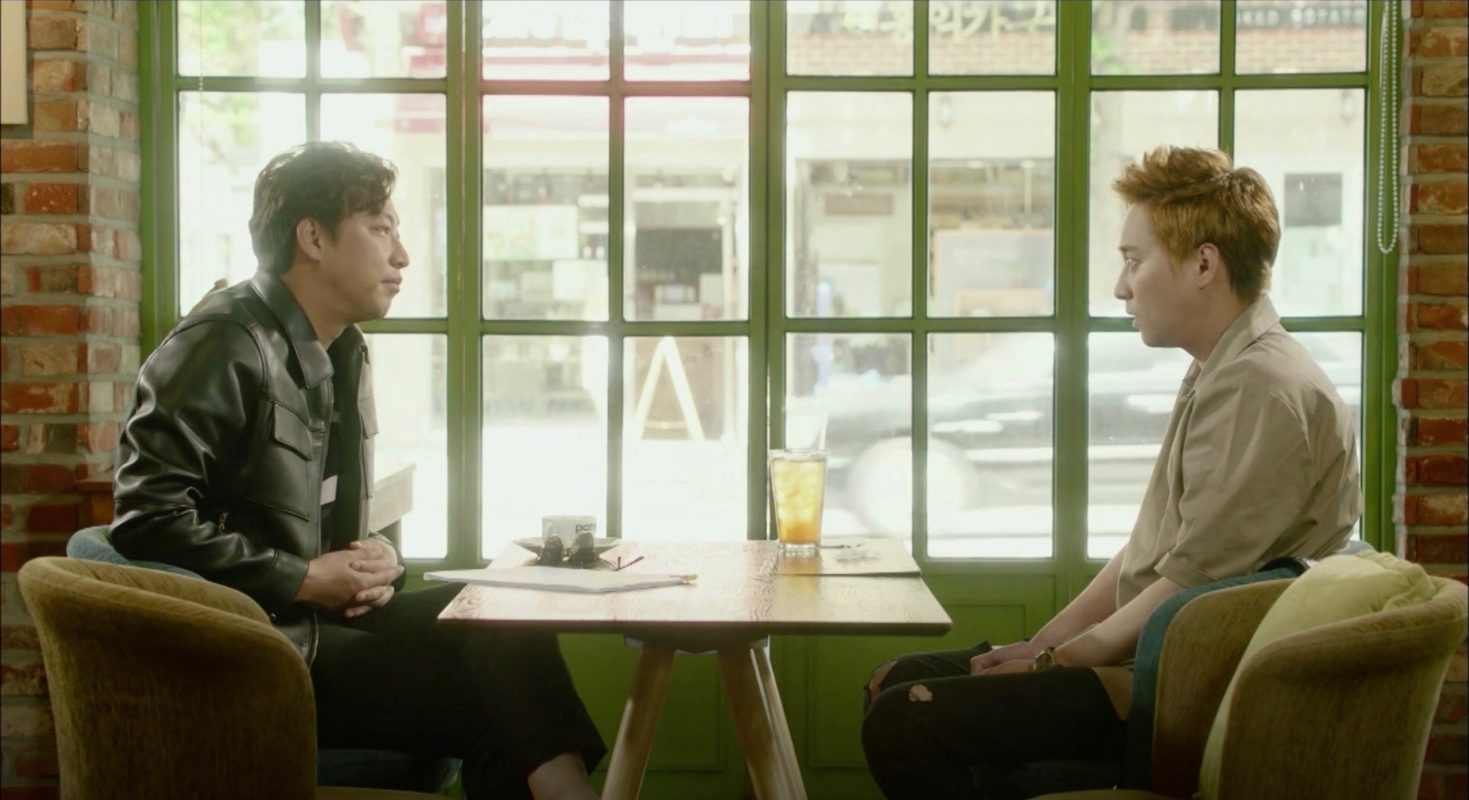 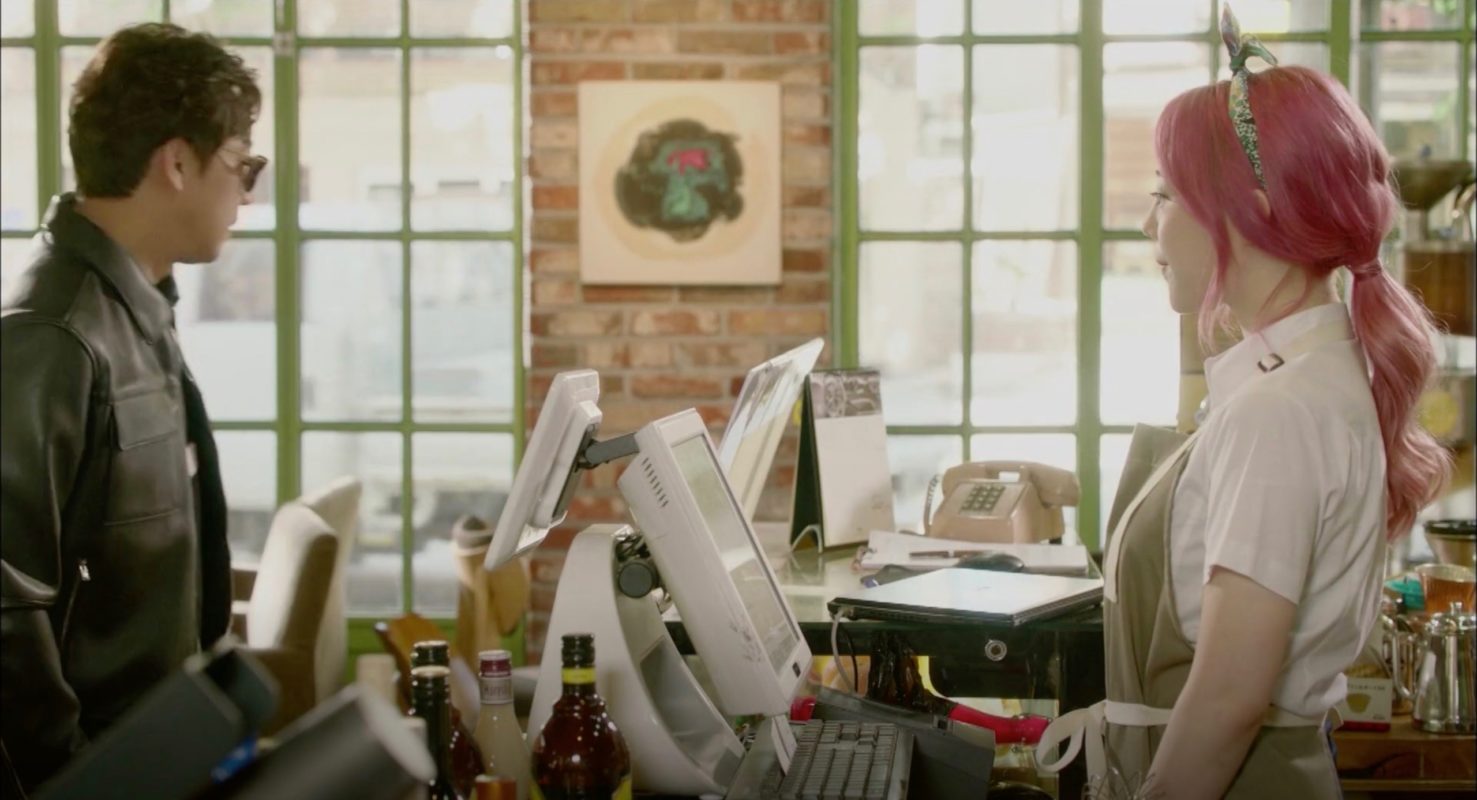 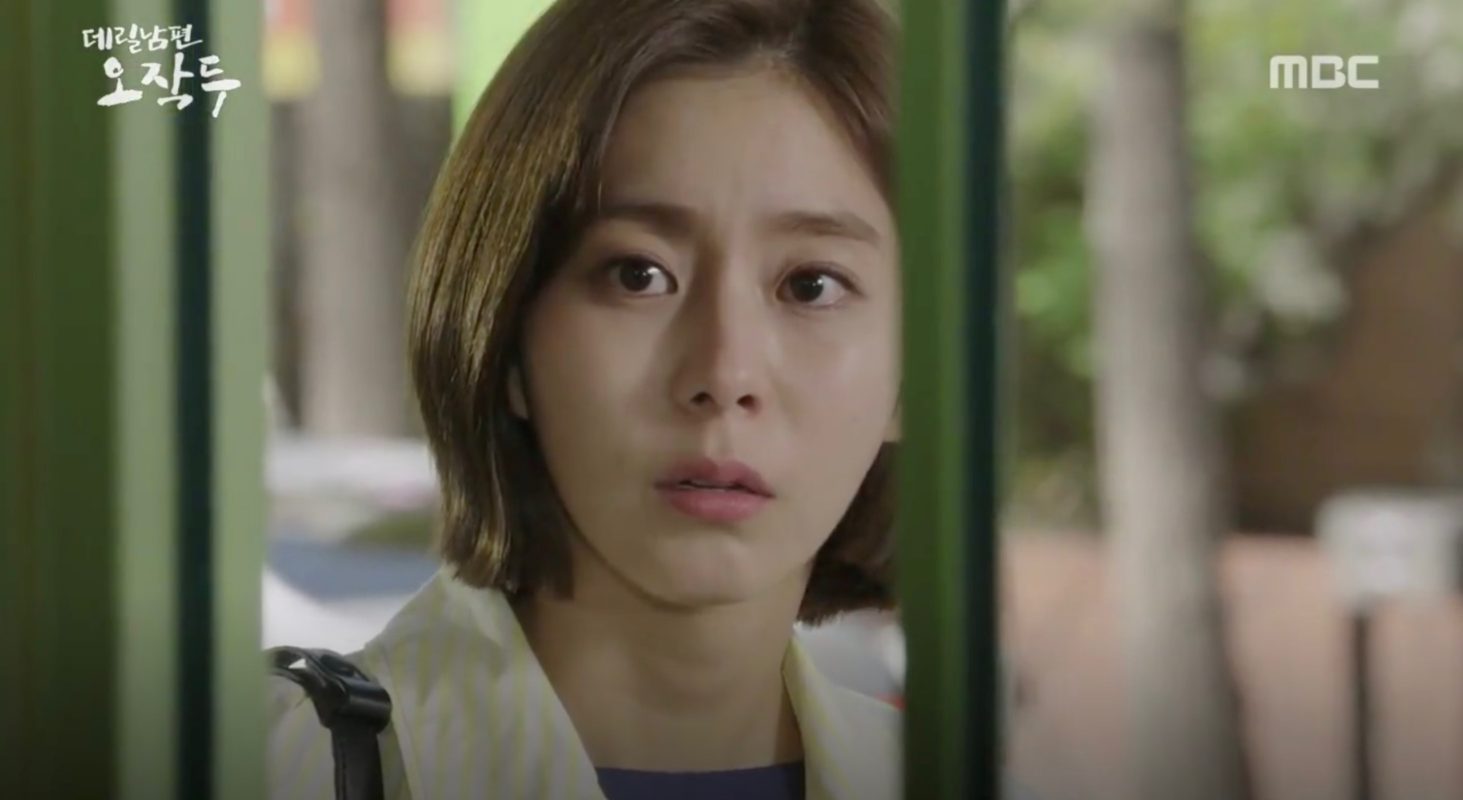 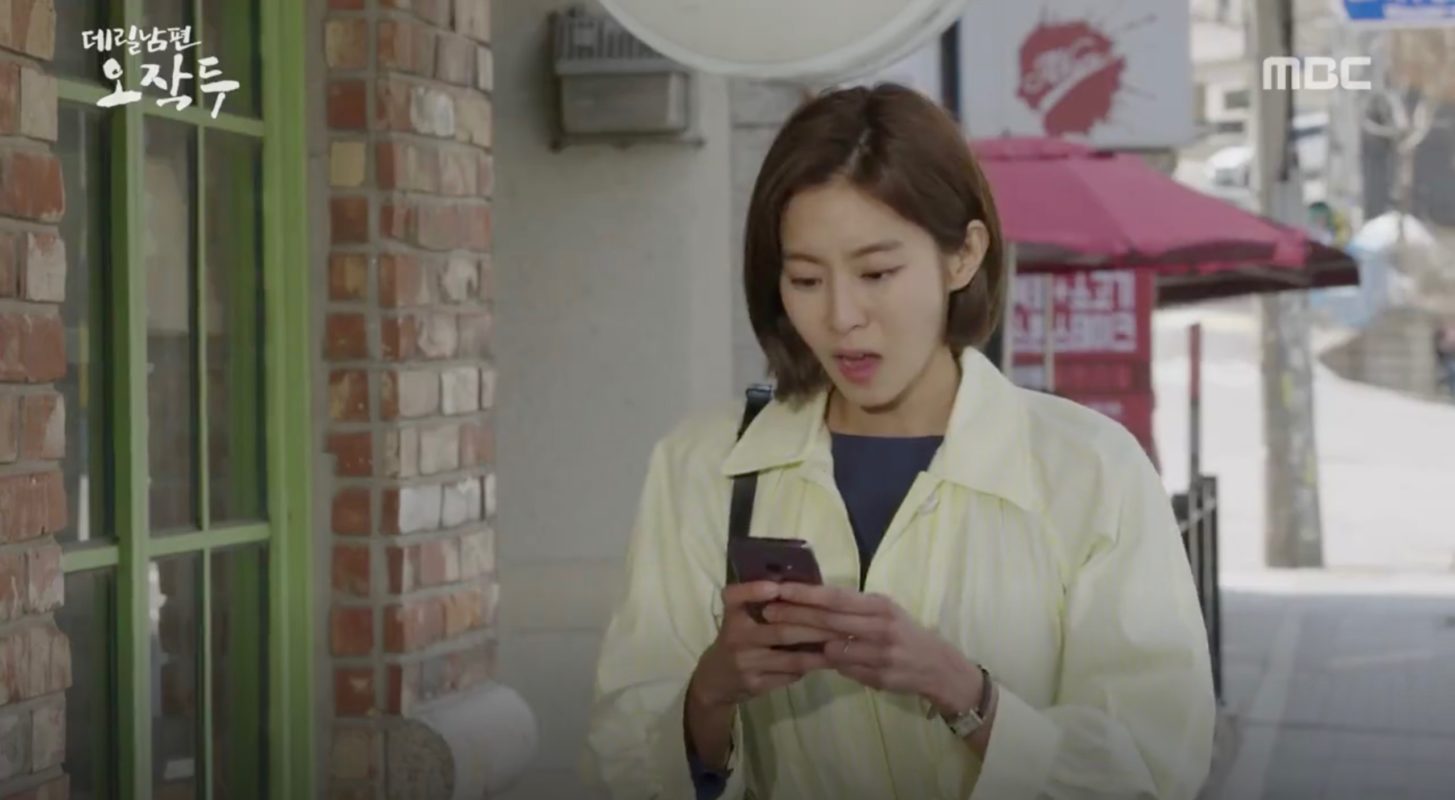 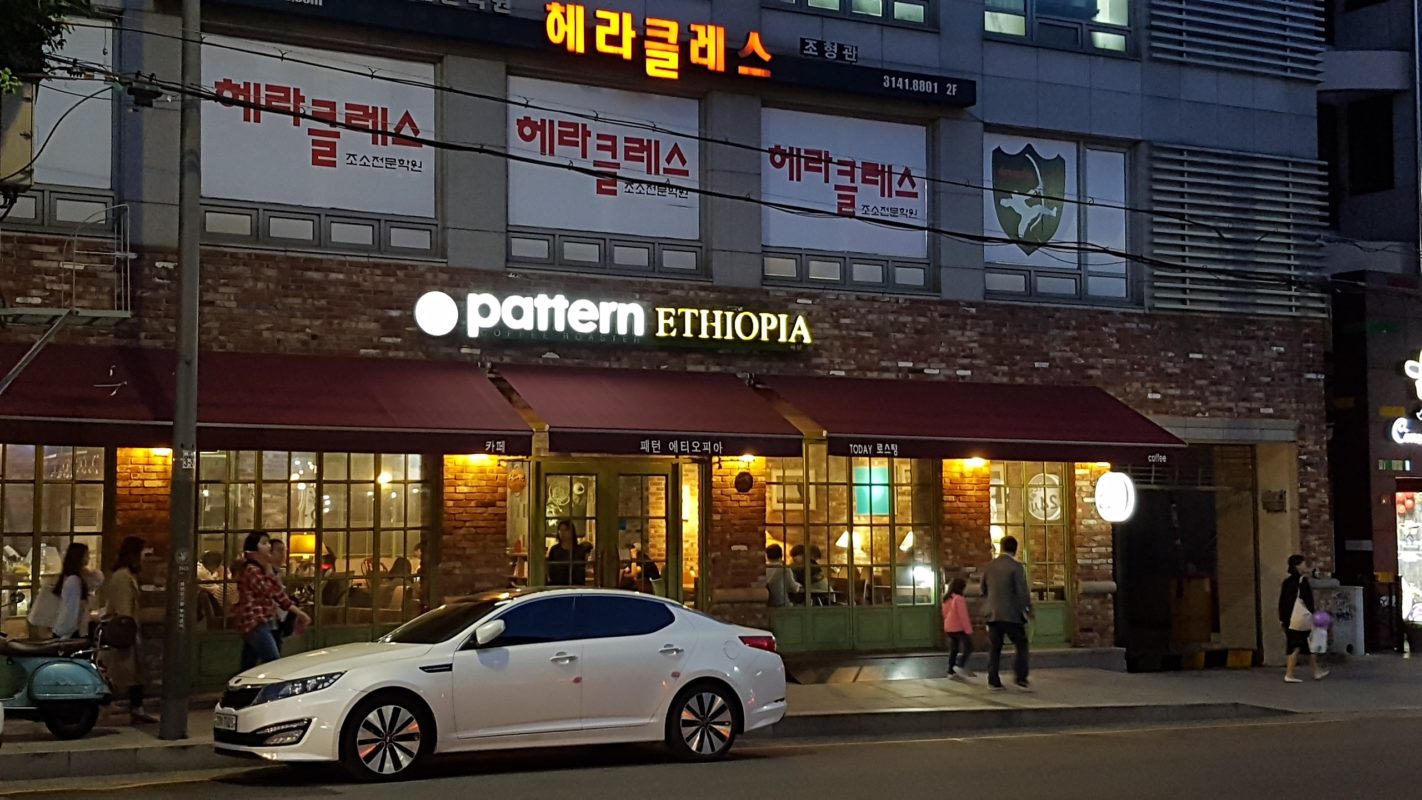 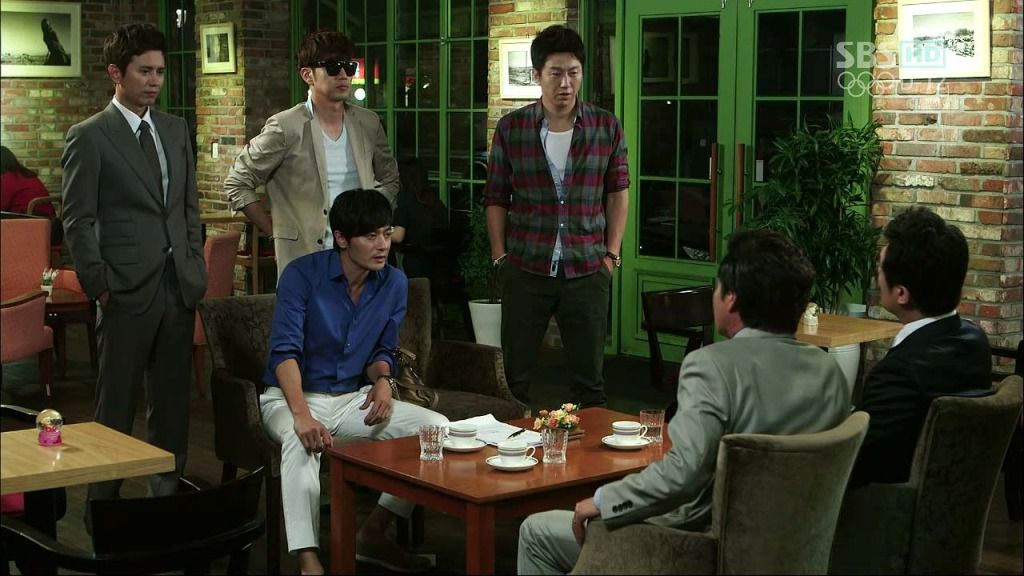 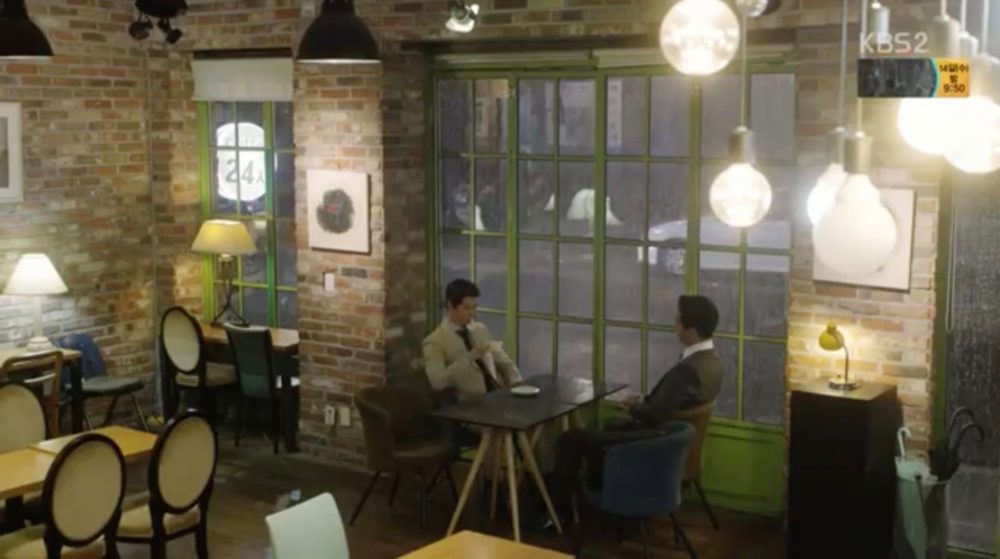 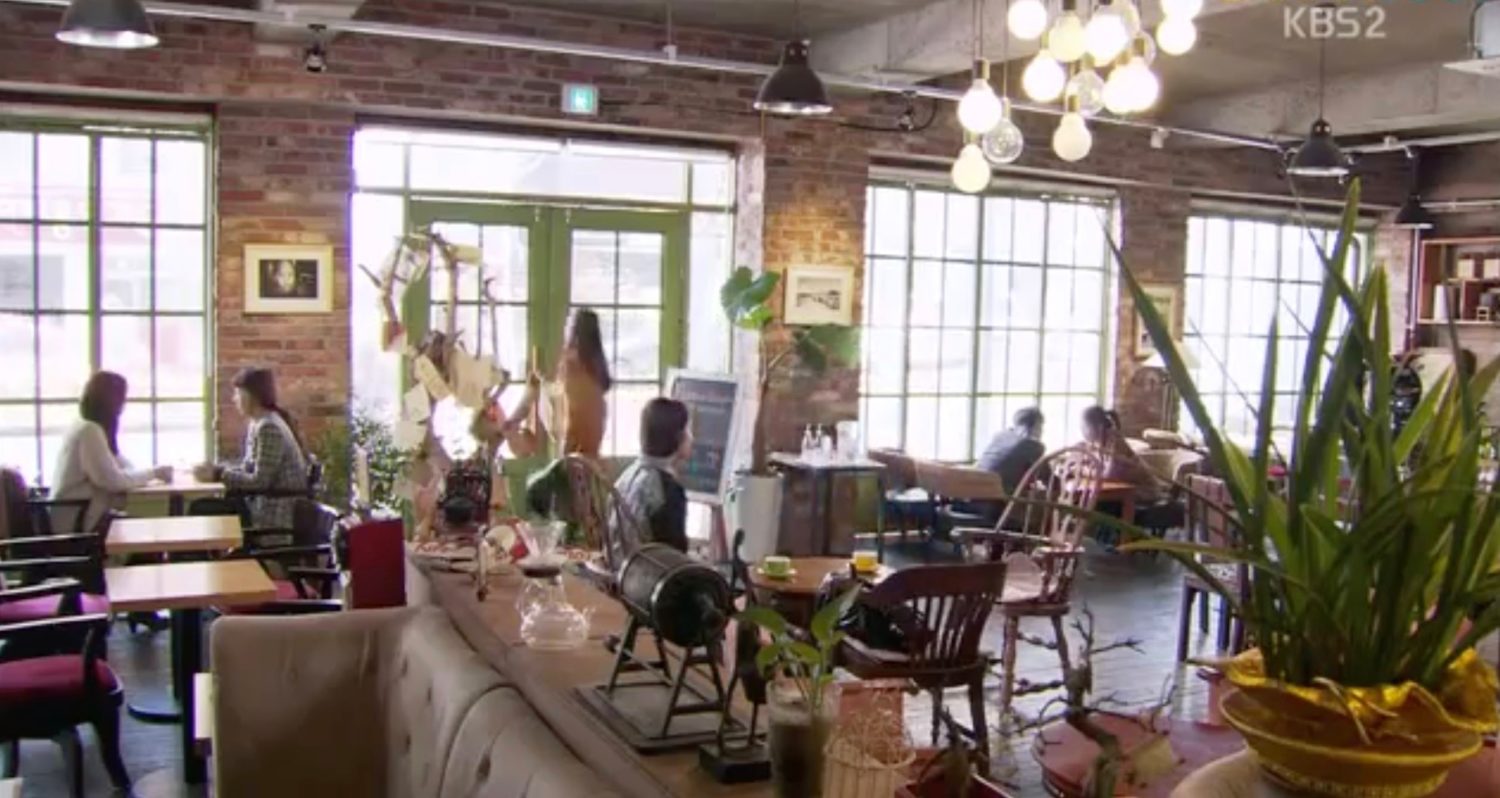 Han Kang-bae (Yook Sung-jae) sits down at this café with a woman who had just addresses him as ‘crown prince’ in the streets in episode 10 of Mystic Pop-up Bar (쌍갑포차) (JTBS, 2020) and it turns out that the woman is the incarnation of his mother, the Queen (Park Eun-hye).

Gil O-sol (Kim You-jung) invites Daniel Choi (Song Jae-rim) to this café in episode 8 of Clean With Passion For Now (일단 뜨겁게 청소하라) (JTBC, 2018-19) to thank him for a favor he did and also ask him about his love confession to her.

Seo Do-jae (Lee Min-ki) and Han Se-gye (Seo Hyun-jin) meet up here in episode 7 of The Beauty Inside / Byooti Insaideu (뷰티 인사이드) (JTBC, 2018) and Se-gye thinks it’s about the kiss they’ve shared the other night but he is only talking about the interview they have to give the next day.

Kim Min-kyu (Yoo Seung-ho) meets up here with Madame X’s secretary in episode 29 and 30 of I’m Not A Robot (로봇이 아니야) (MBC, 2017-18) as Madame X is helping to corner the American investors who are about to buy the Santa Maria Team.

Seo Jung-hoo (Ji Chang-wook) meets up with his mother at this café in episode 13 of Healer (힐러) (KBS2, 2014-15). He is being trailed and tells his mother to role-play as if it is the first time in 10 years that they reunite.

Lee Tae-baek (Jin Goo) thinks back to a moment in episode 1 of Ad Genius Lee Tae-baek (광고천재 이태백) (KBS2, 2013) when he met at this café with his then-girlfriend Ko A-ri (Han Chae-young) just before she went to New York to studied and handed his portfolio over to her as a starting gift (which she takes with a kiss in return).

It is at this café that Seo Yi-soo’s (Kim Ha-neul) stepbrothers want to force her into an inheritance settlement in episode 16 of A Gentleman’s Dignity (신사의 품격) (SBS, 2012). But they didn’t count with the F44 who step in in Yi-soo’s support.

Pattern Ethiopia [패턴에티오피아], opened in 2011 as Ethiopia and closed in 2020, was located at the first floor of the Morning Glory Building [모닝글로리빌딩]. The café was opened by by professional photographer Shin Mi-sik (신미식이) a few years after having opened café Madagascar [마다가스카르]. Shin Mi-sik had specialized on taking photos in Africa , hence the café-gallery’s name.

The café’s building is located on Wausan-ro [와우산로] at the northern end of Hongdae [홍대], which is part of Seoul’s neighborhood Seogyo [Seogyo-dong/서교동] in the Mapo District [Mapo-gu/마포구]; a few steps away to/from Sammat Hongdae [삼맛호오떡 홍대점] and Gyeongui Line Forest Park [경의선숲길공원 / 경의선공원]. In 2021, the building became the headquarter branch of stationery and office supplies shop Morning Glory [모닝글로리], and was also renamed as such. The facade of the building was completely overhauled when the company moved into the building.