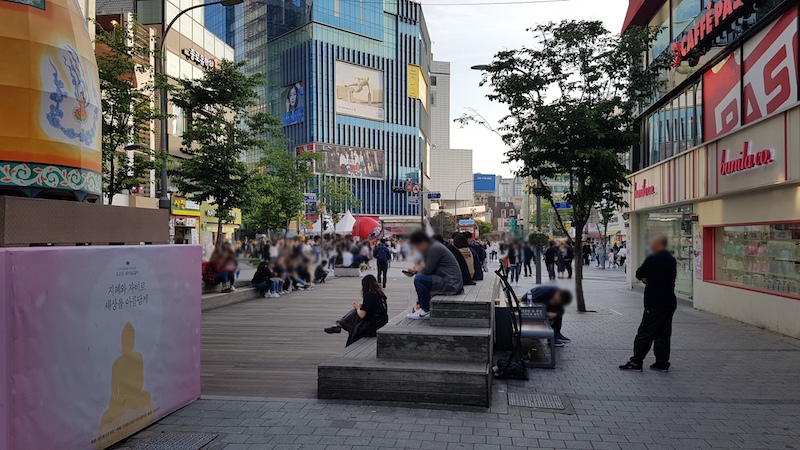 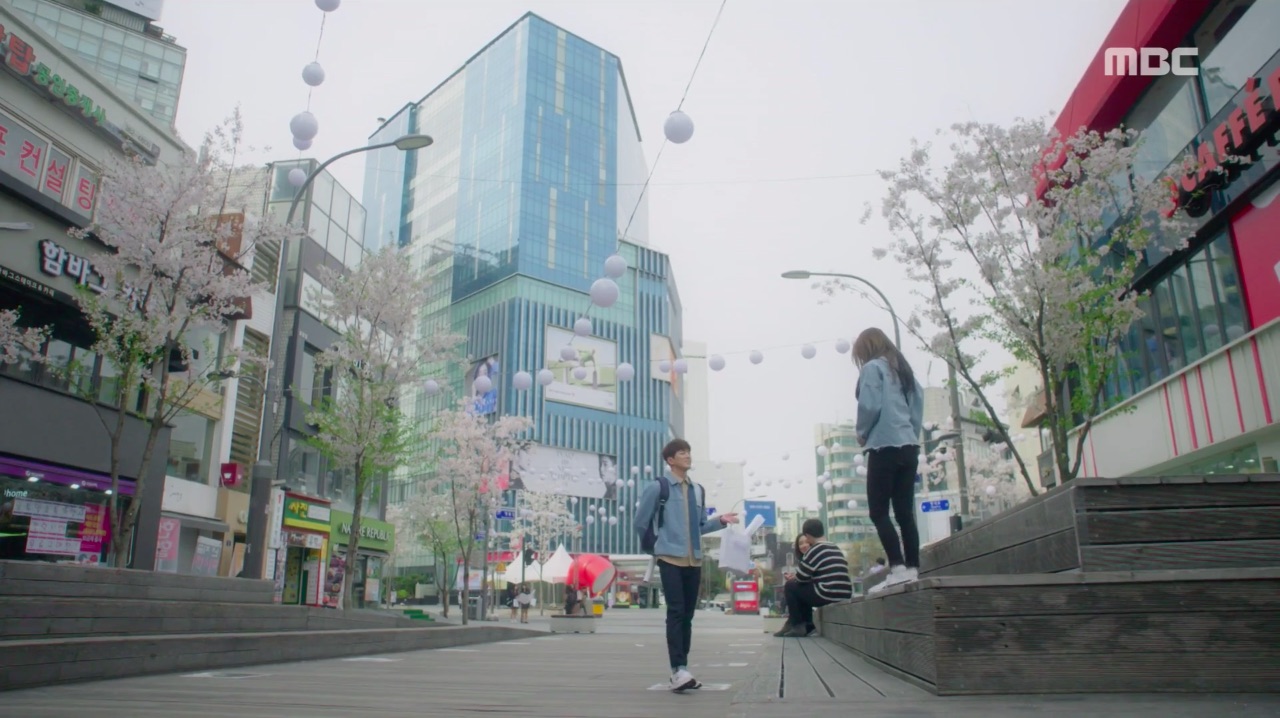 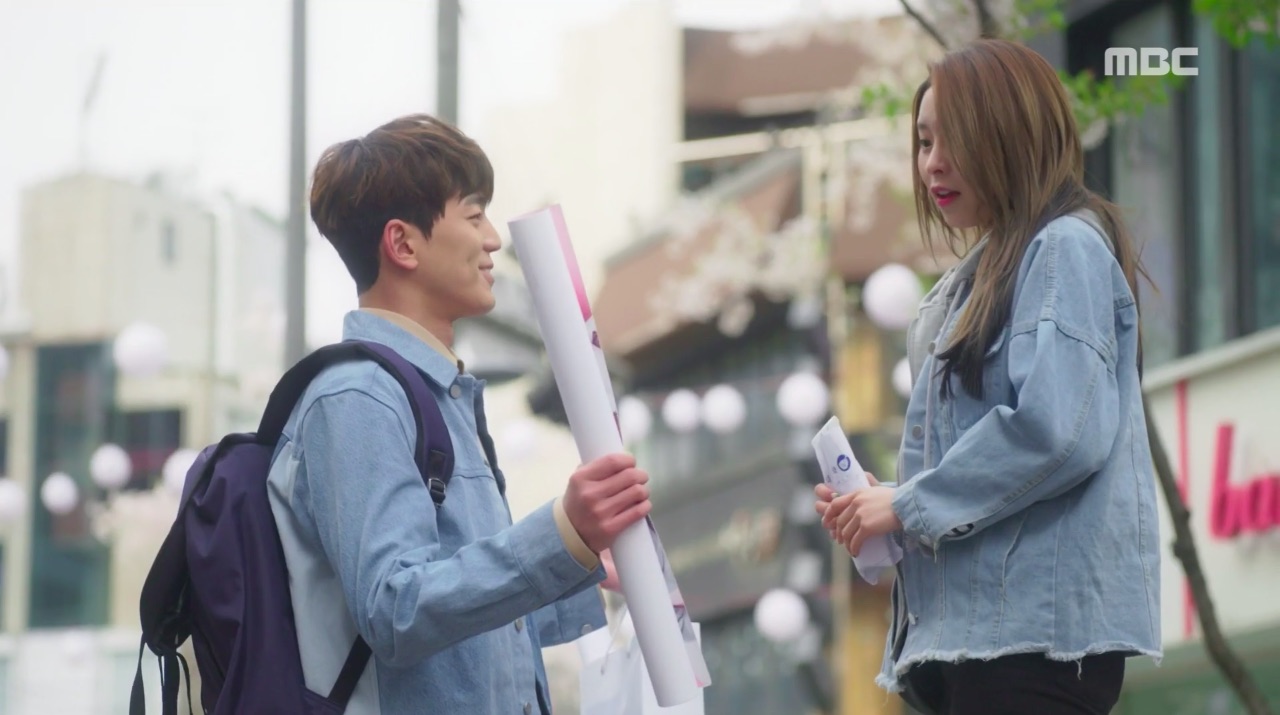 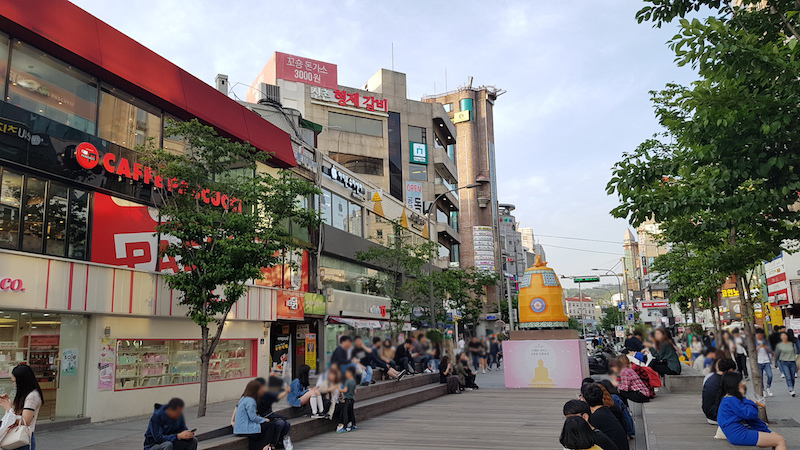 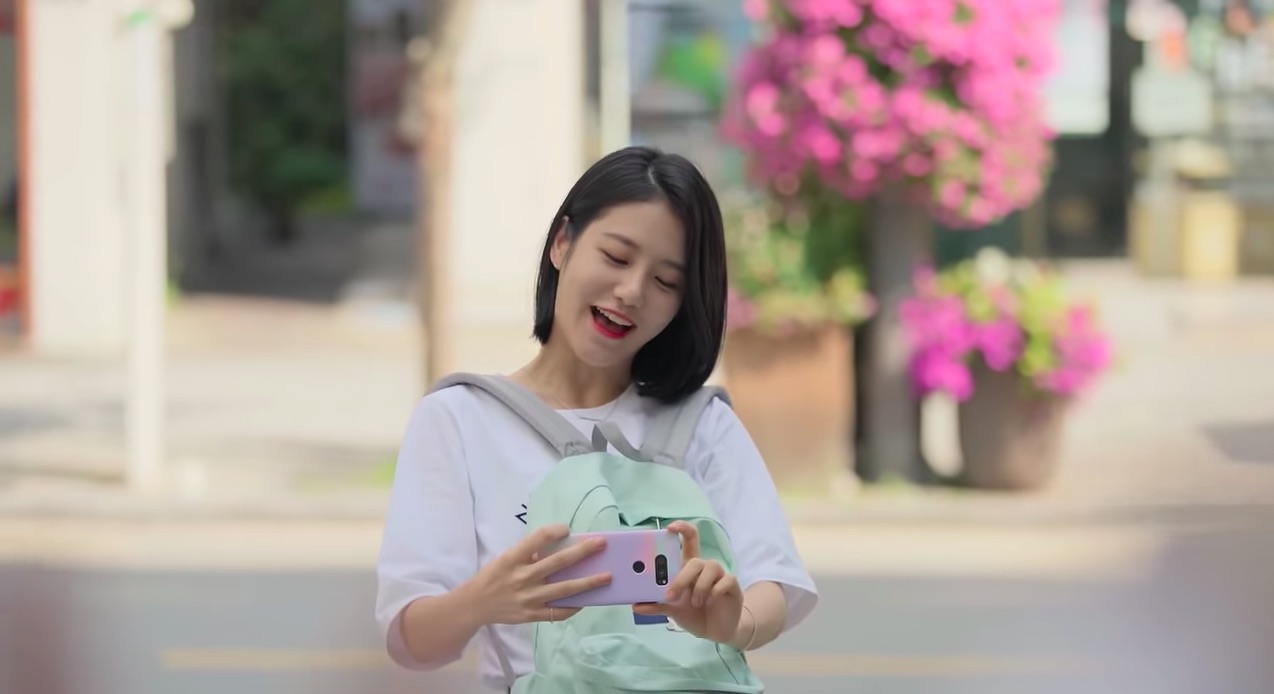 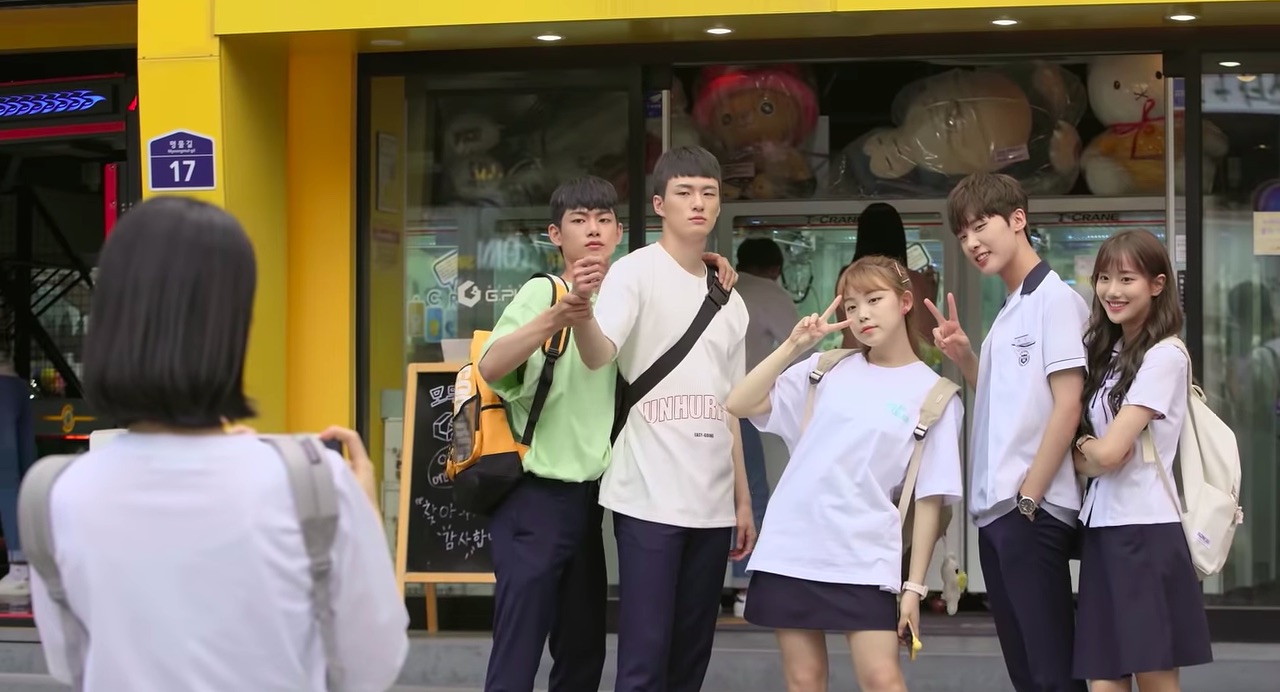 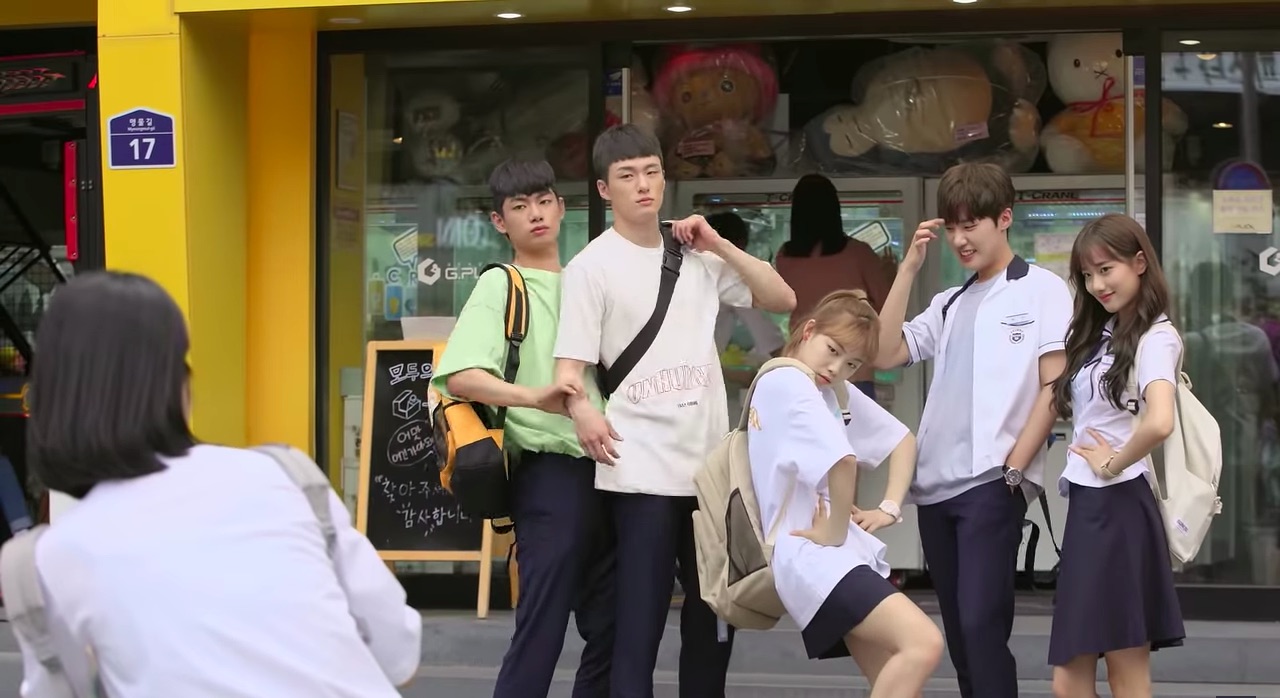 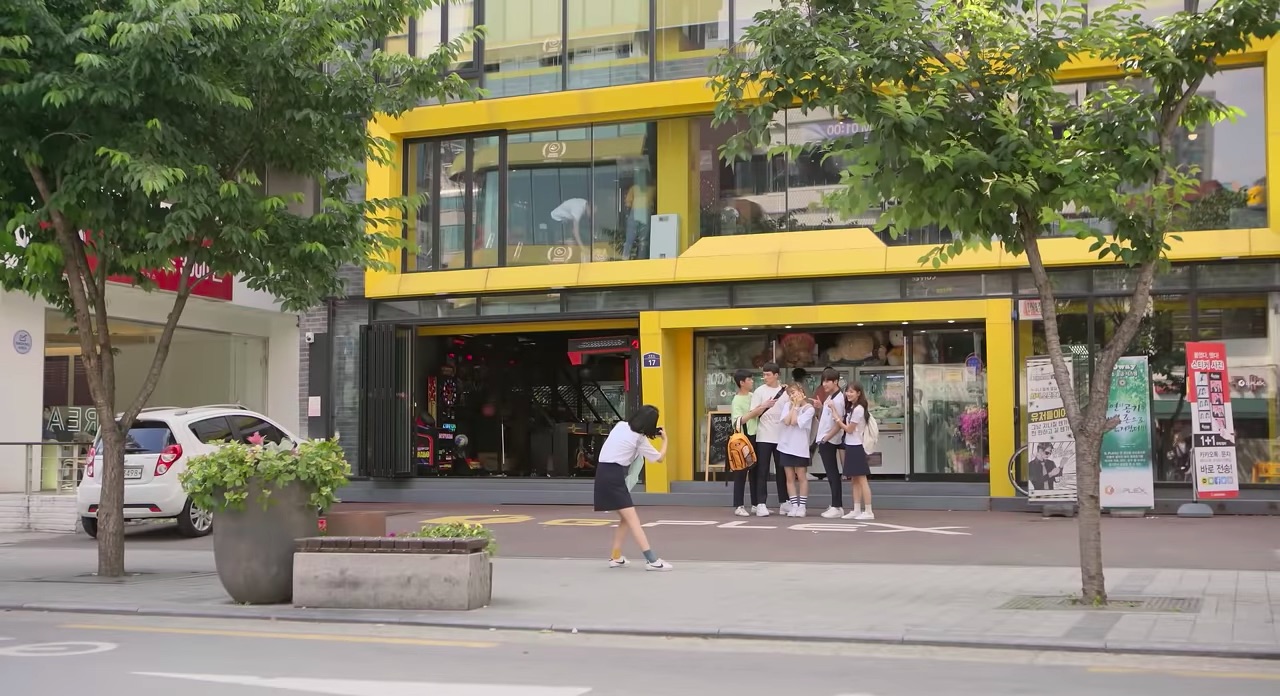 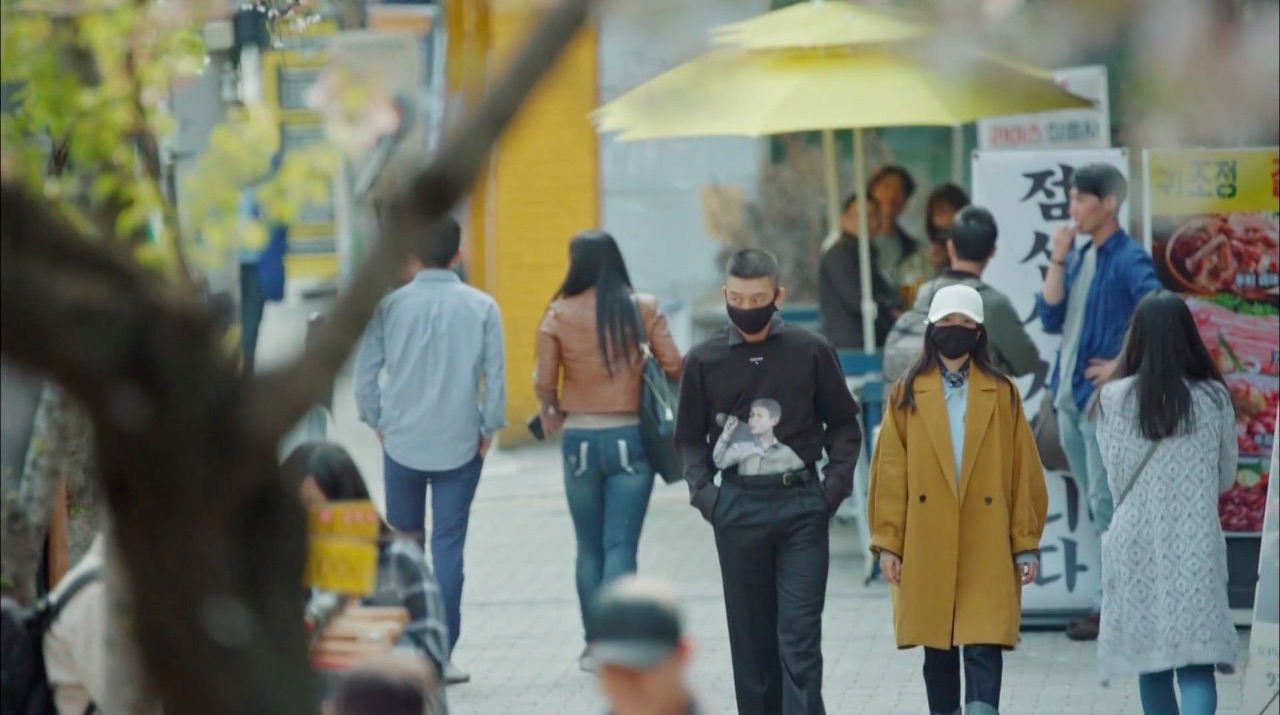 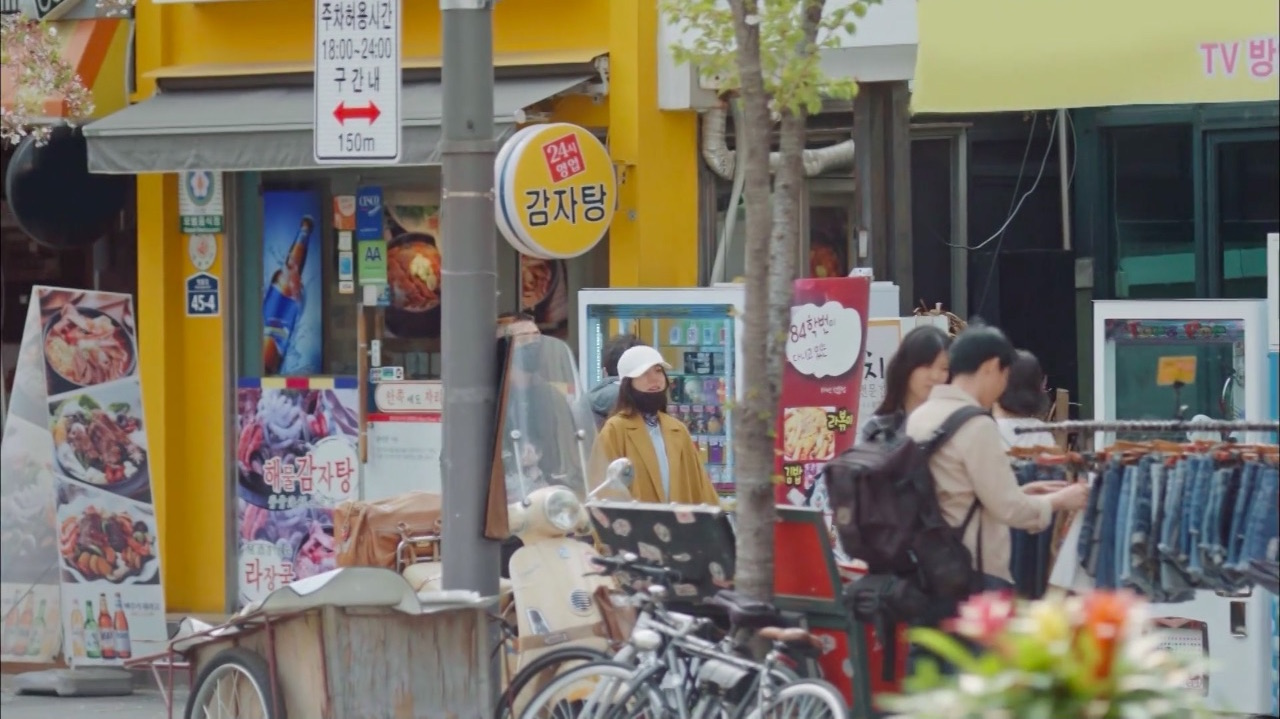 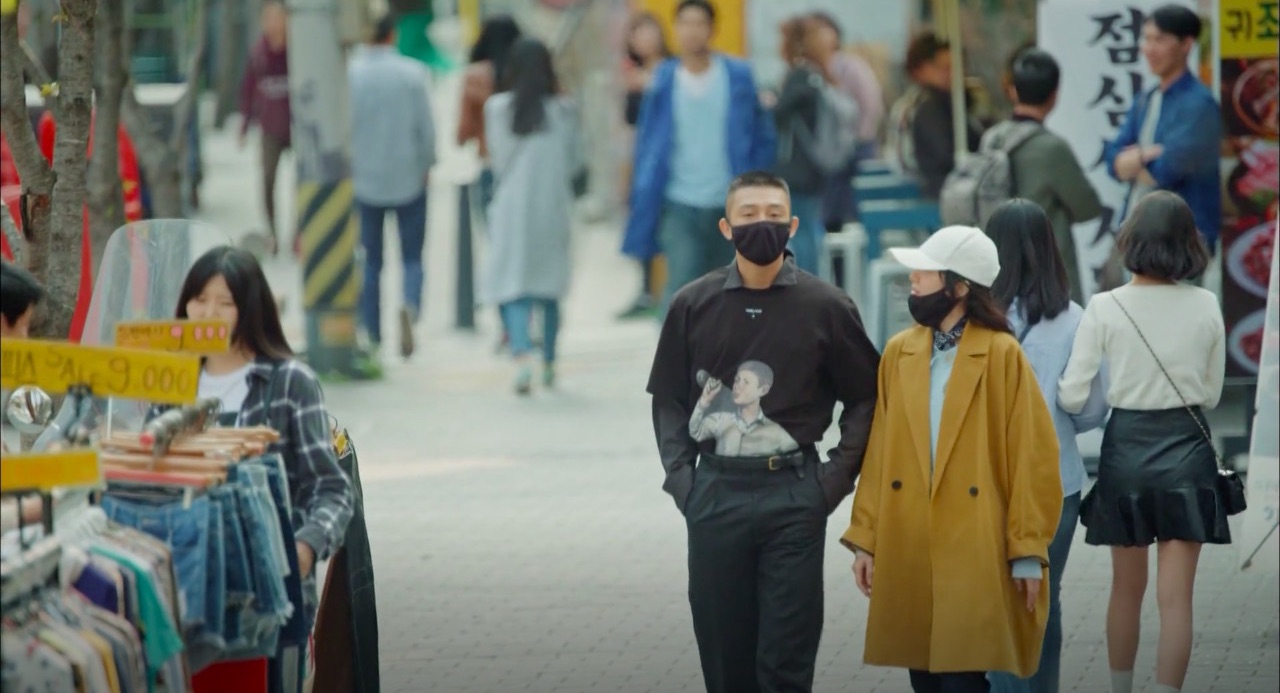 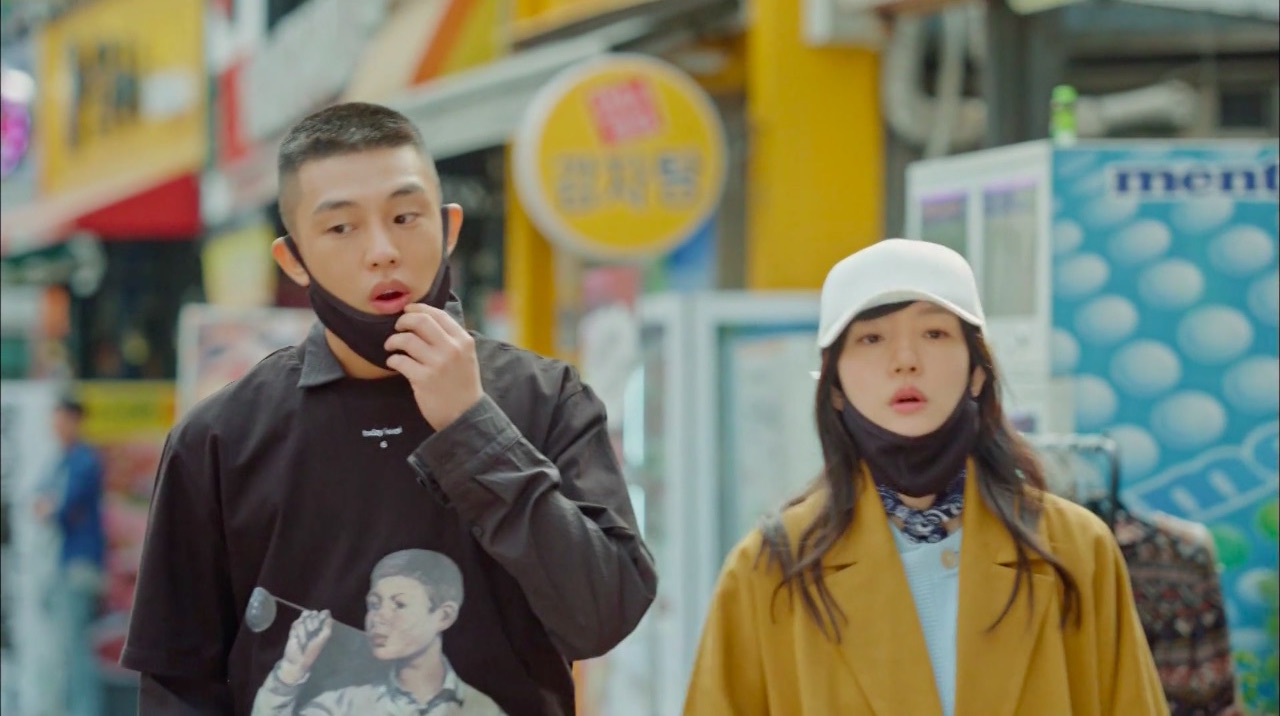 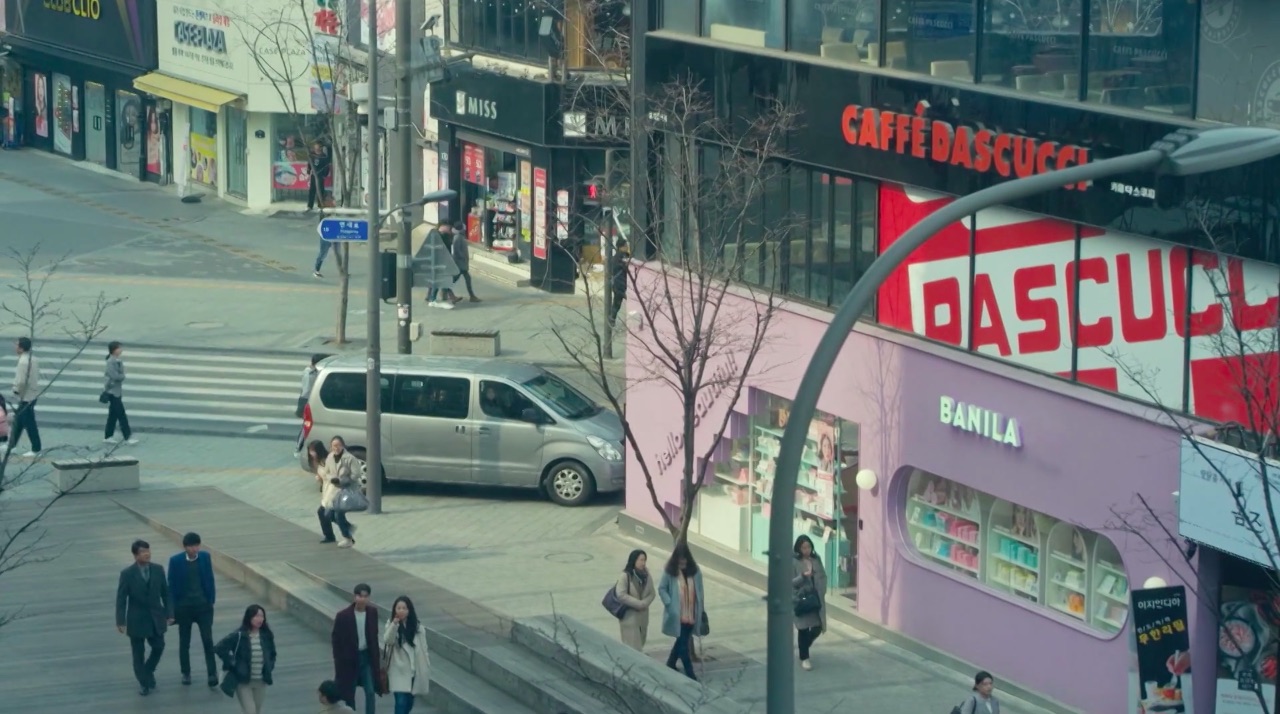 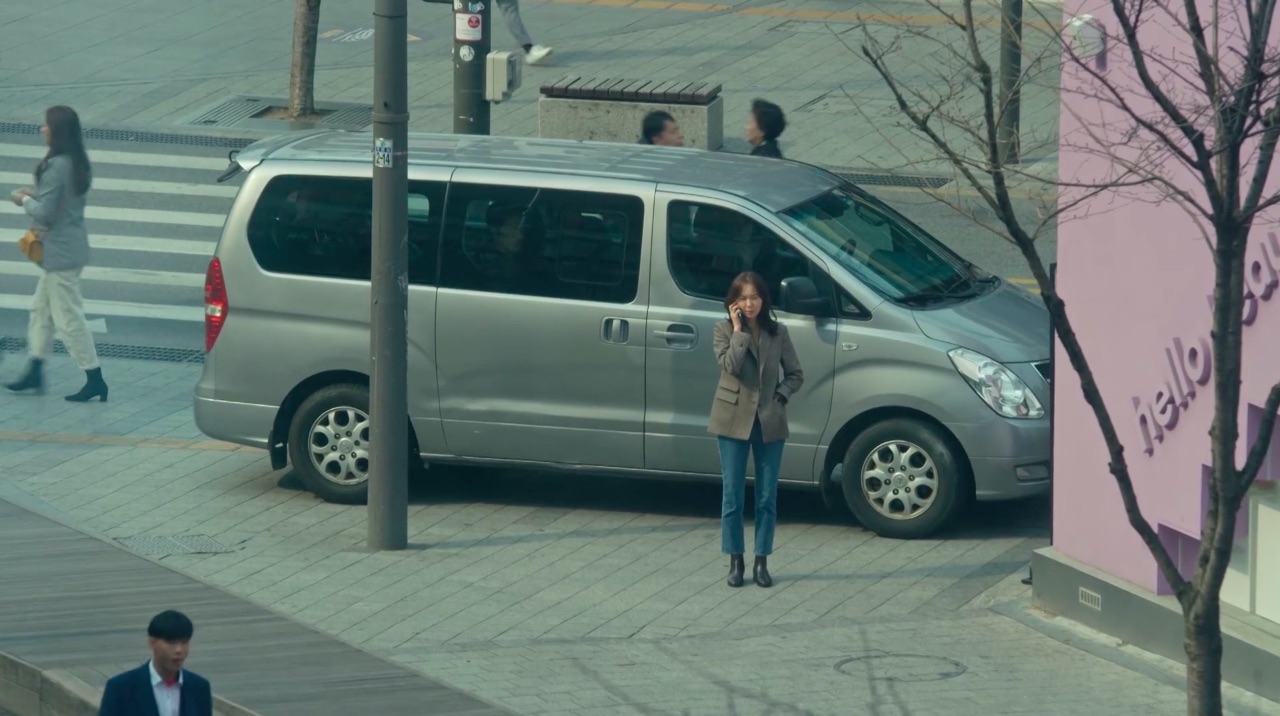 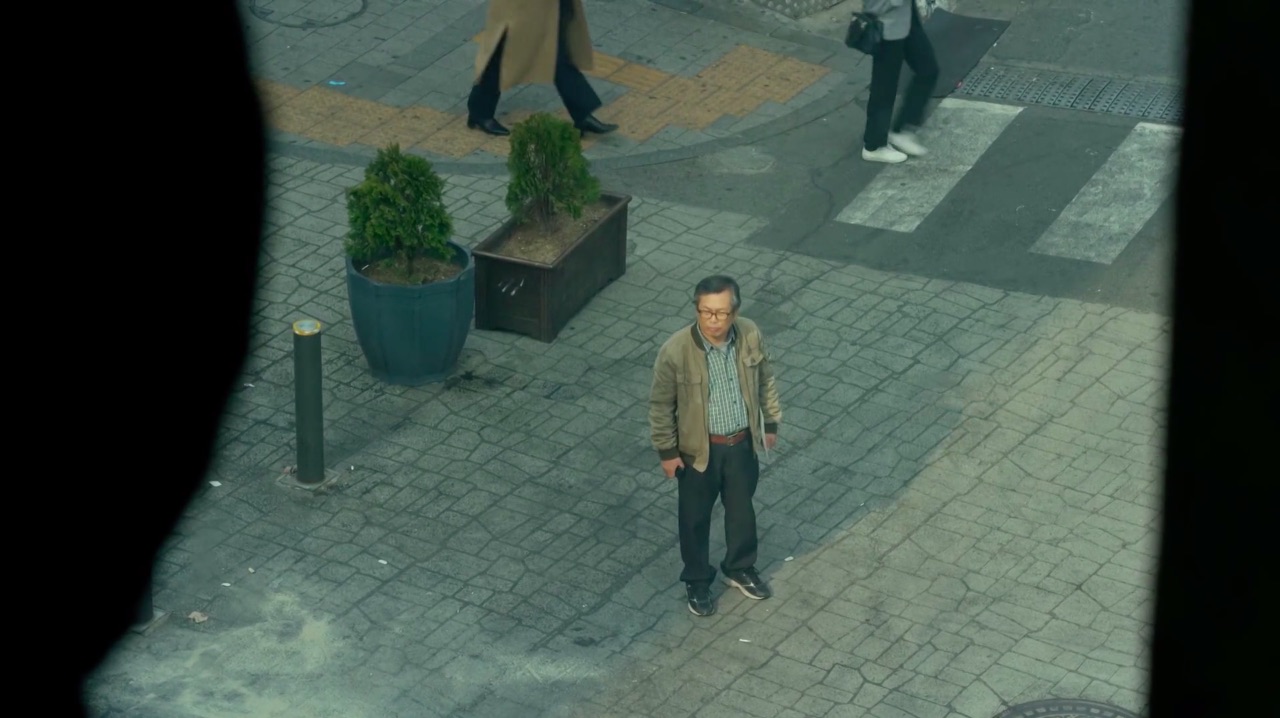 As Yang Jung-guk (Choi Si-won) keeps watch from the second floor of a restaurant, the Intelligent Crimes team keeps watch on the elderly buyer waiting on this street in episode 8 of My Fellow Citizens!/Fellow Citizens (국민 여러분!) (KBS2, 2019). After Kim Mi-young (Lee Yoo-young) gets a phone call from Jung-guk about her whereabouts, the elderly buyer gets a phone call and begins to head off in a different direction than planned. Mi-young and her partner follows suit.

Kim Myeong-ha (Kim Min-gue) meets Mong-mong (Elkie from CLC) here in episode 18 of Rich Family’s Son (부잣집 아들) (MBC, 2018), after he had helped her queue up at a beauty store to collect promotional items, including 2 BTOB posters. Overjoyed, Mong-mong pulls a surprised Myeong-ha in for a hug to thank him for his effort.

As part of her wish, Jeon Seol (Lim Soo-jung) brings Han Se-joo (Yoo Ah-in) here to walk along a crowded street together with him in episode 5 of Chicago Typewriter (시카고 타자기) (tvN, 2017). He apologises to her here, and then tells her he wants to try a shooting game to win a prize.

The platform (seen in Rich Family’s Son) is also briefly featured in the Korean Tourism Organisation’s (KTO) 2018 tourism campaign, Have You Ever, in EXO Kai’s video about Korean trends (0:31-0:32).

The eastern end of this street, seen in Rich Family’s Son, was converted into a walking street for pedestrians with raised platforms that line the street. It’s just around the corner from the Holika Holika — Sinchon store [홀리카홀리카 신촌점] where Myeong-ha queued for Mong-mong. The Hyundai Shopping Center U-Plex [현대백화점 유플렉스] can also be seen in the distance.