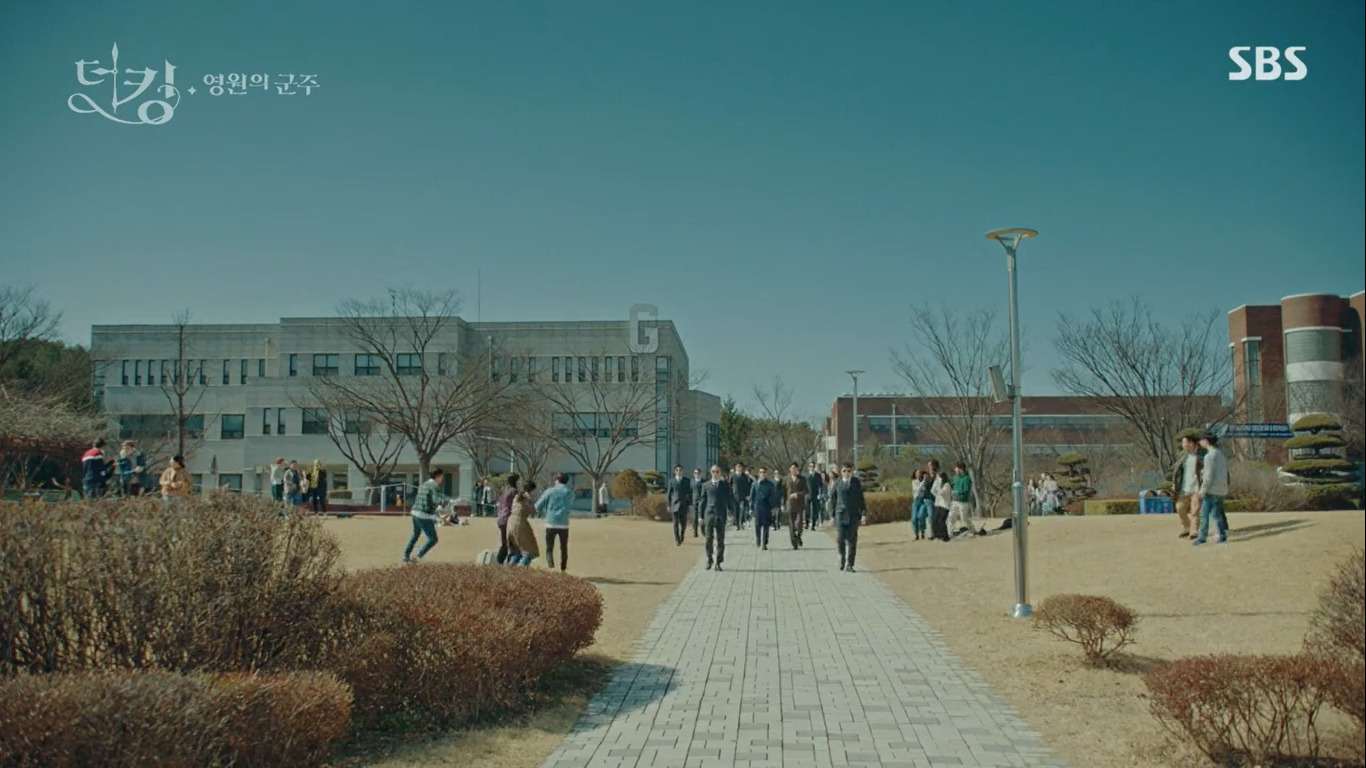 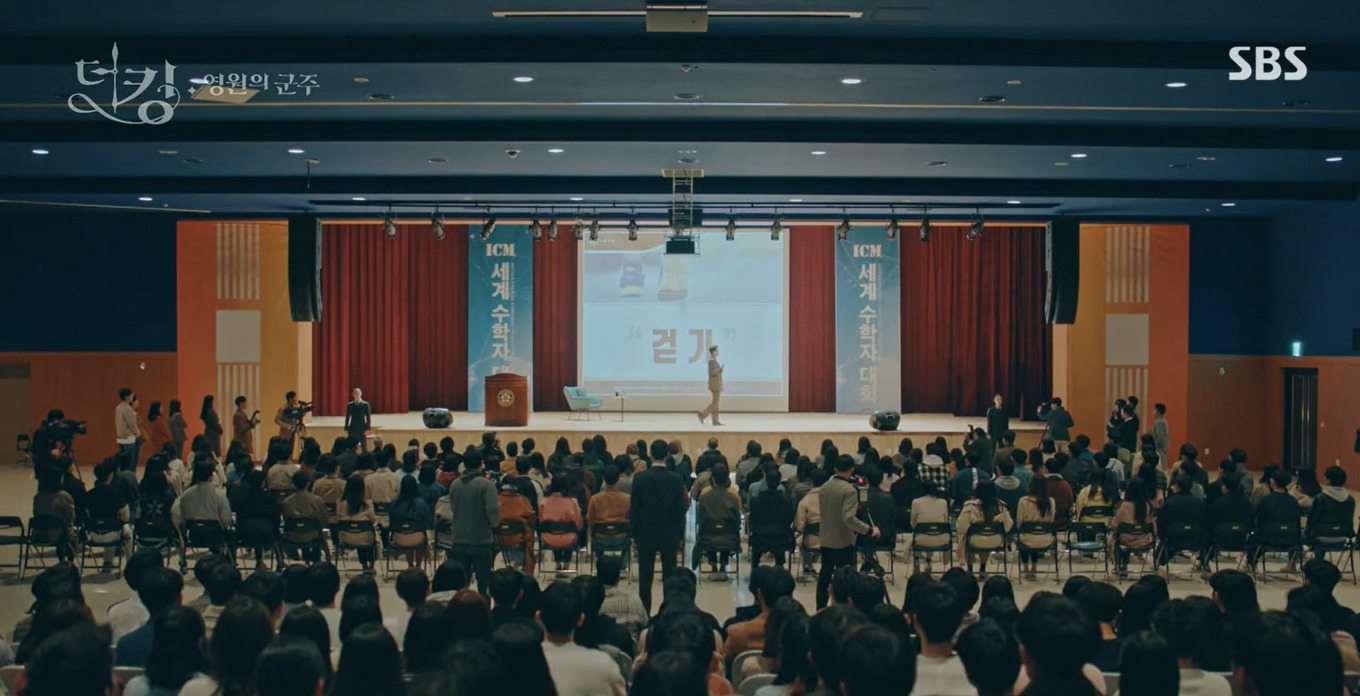 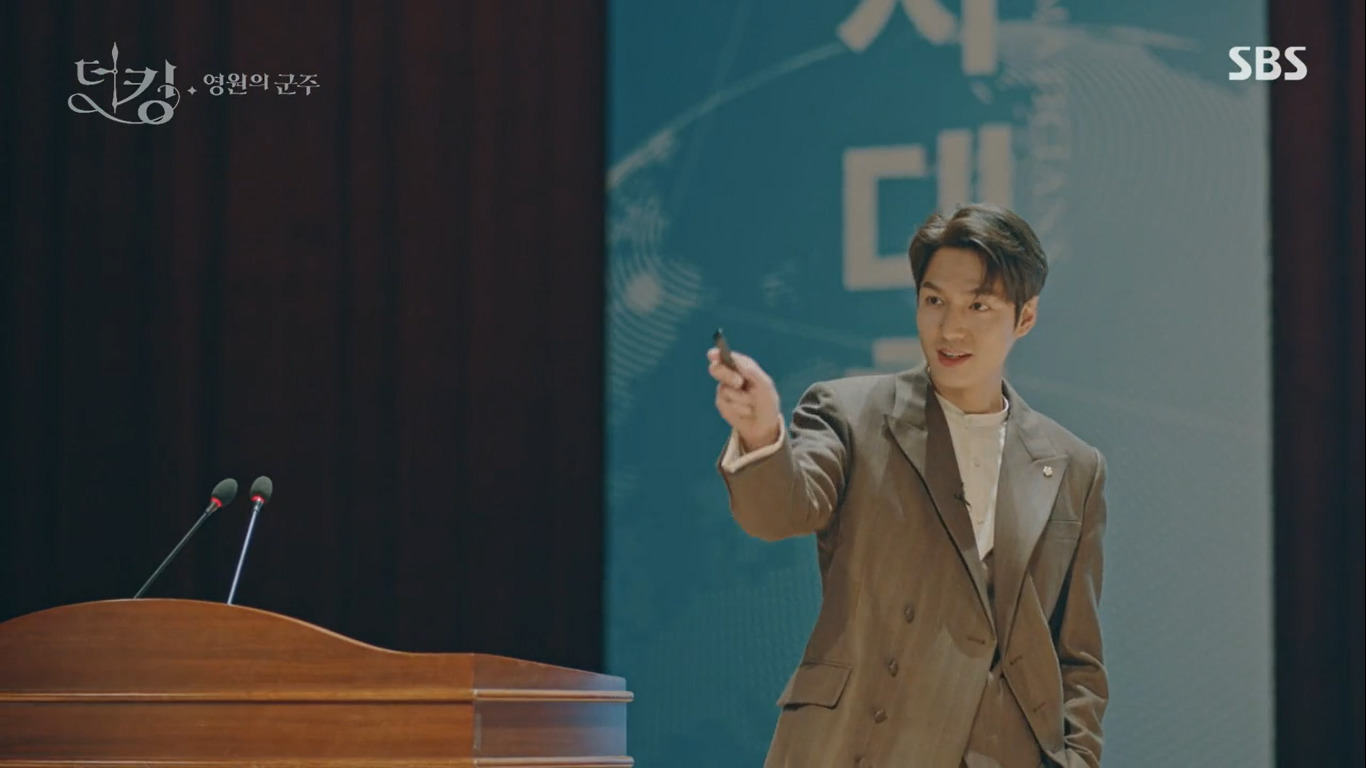 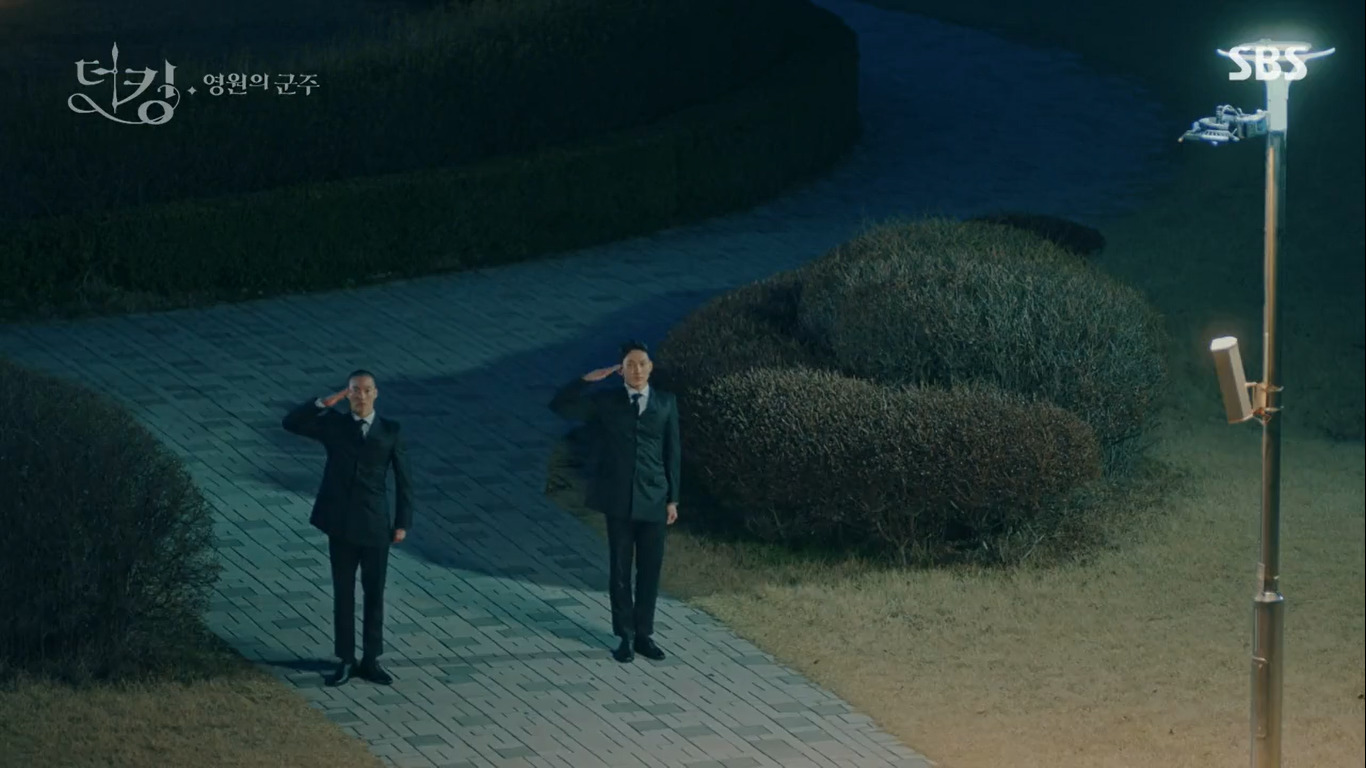 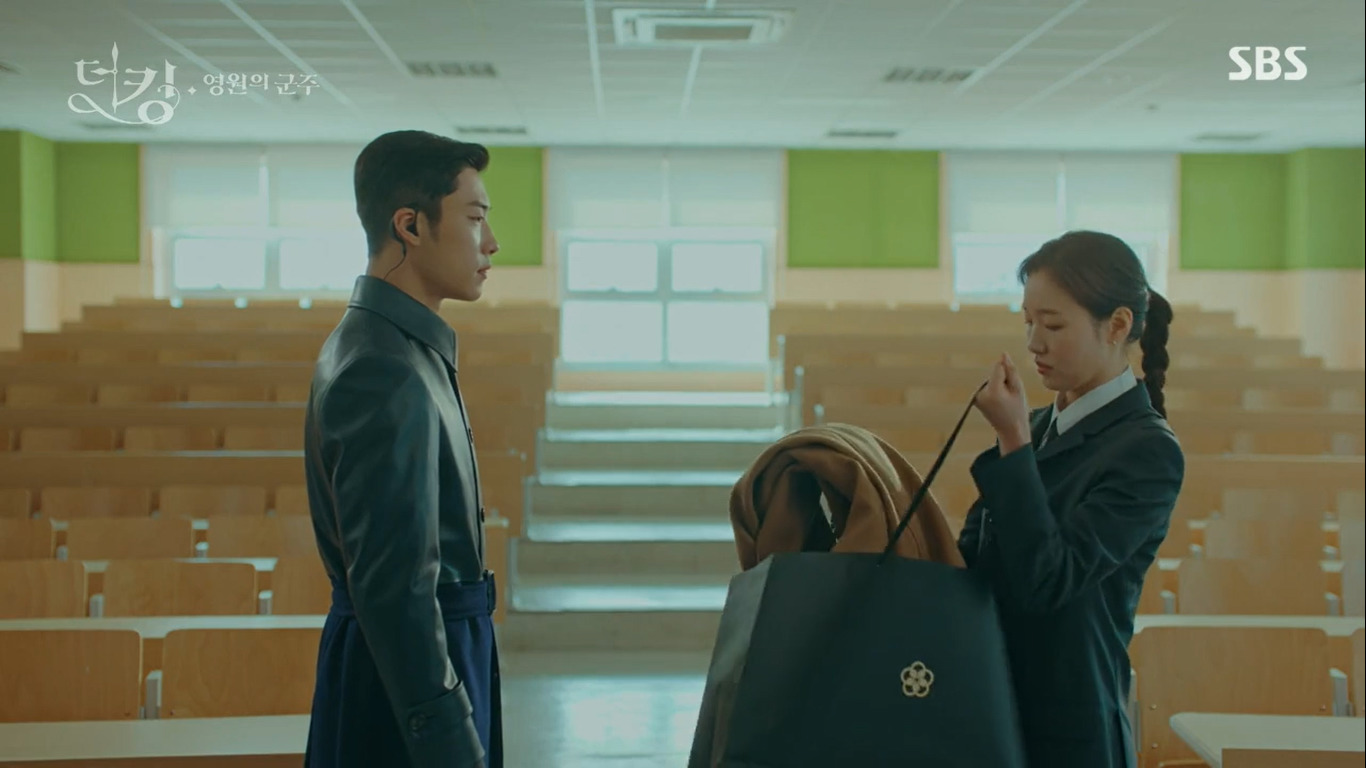 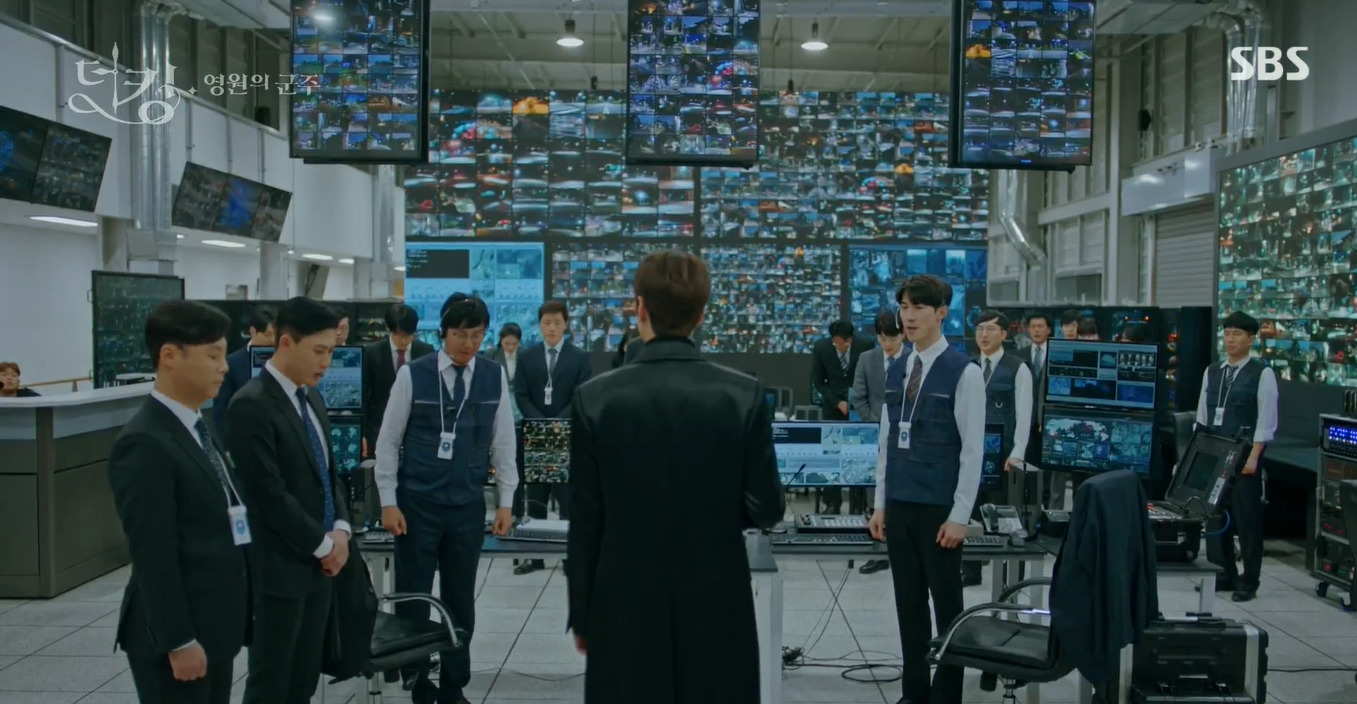 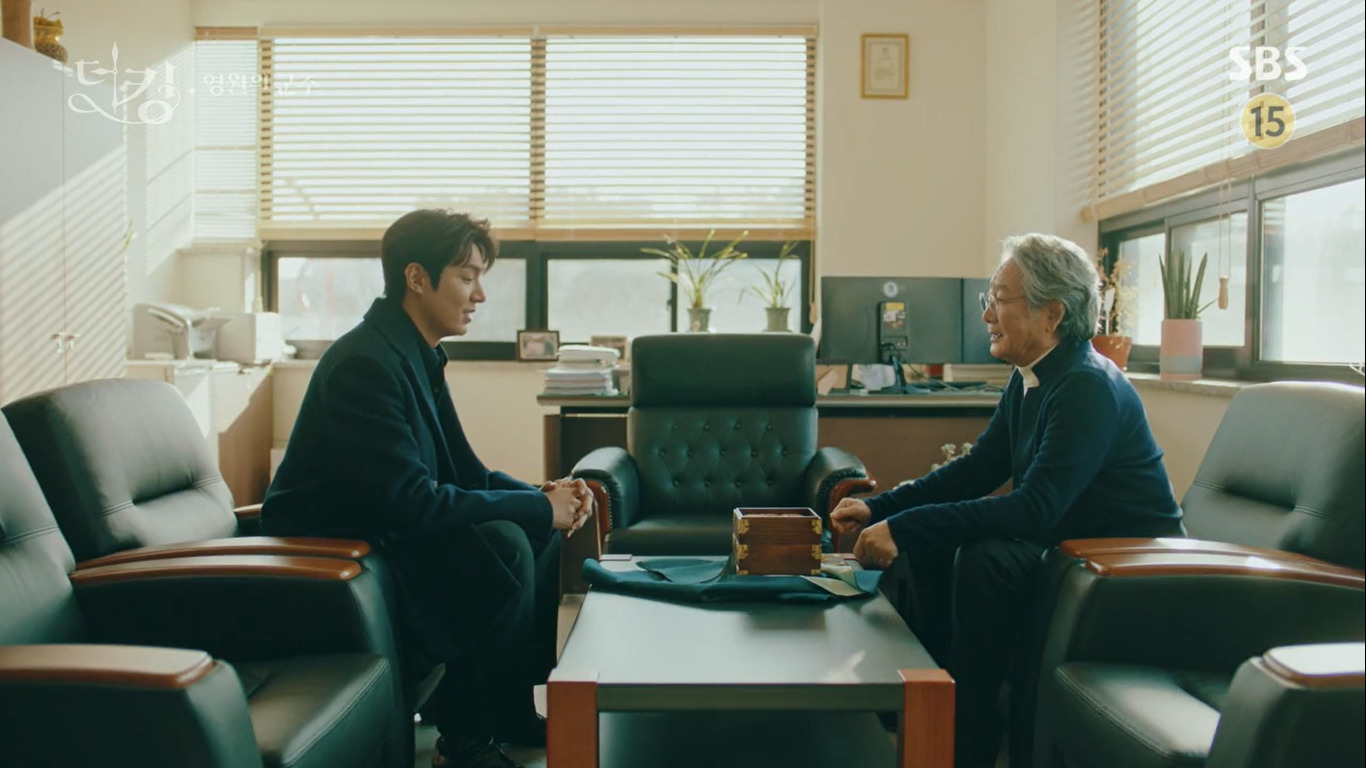 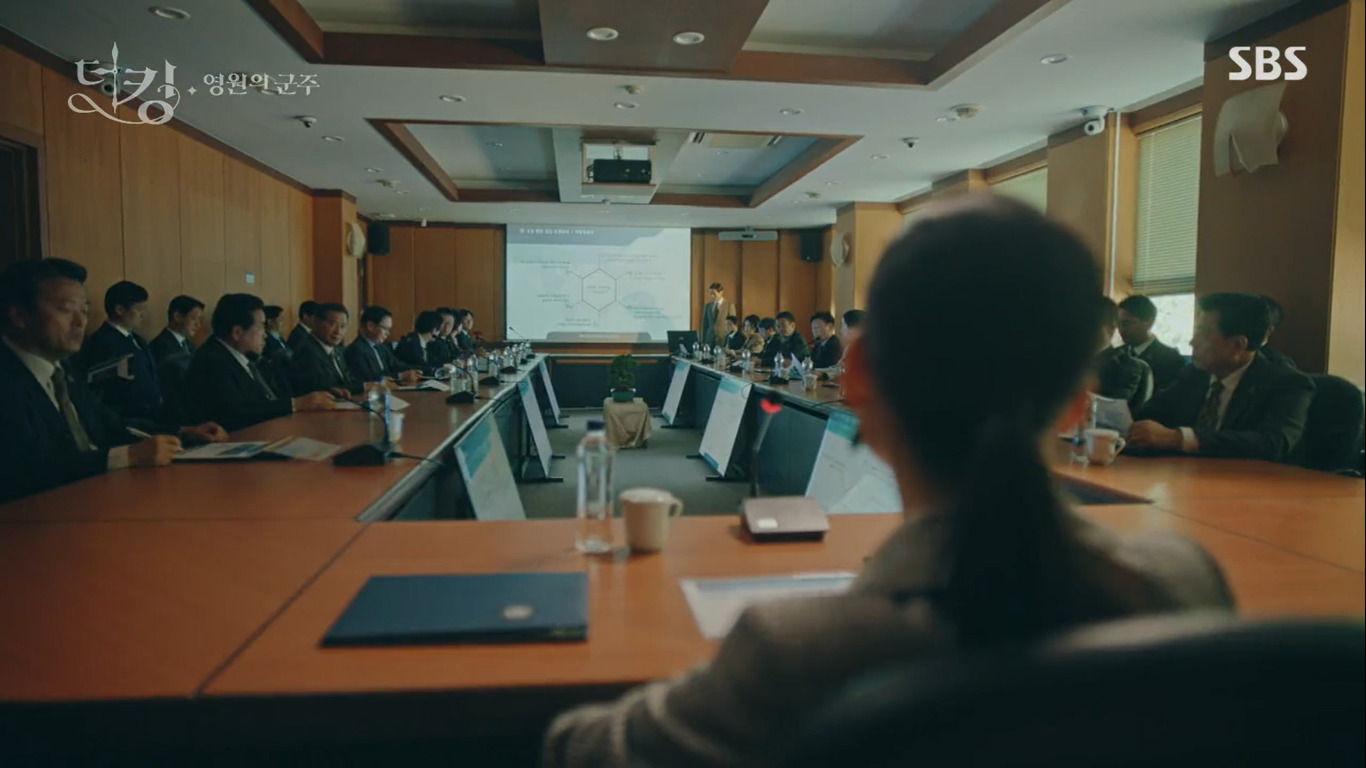 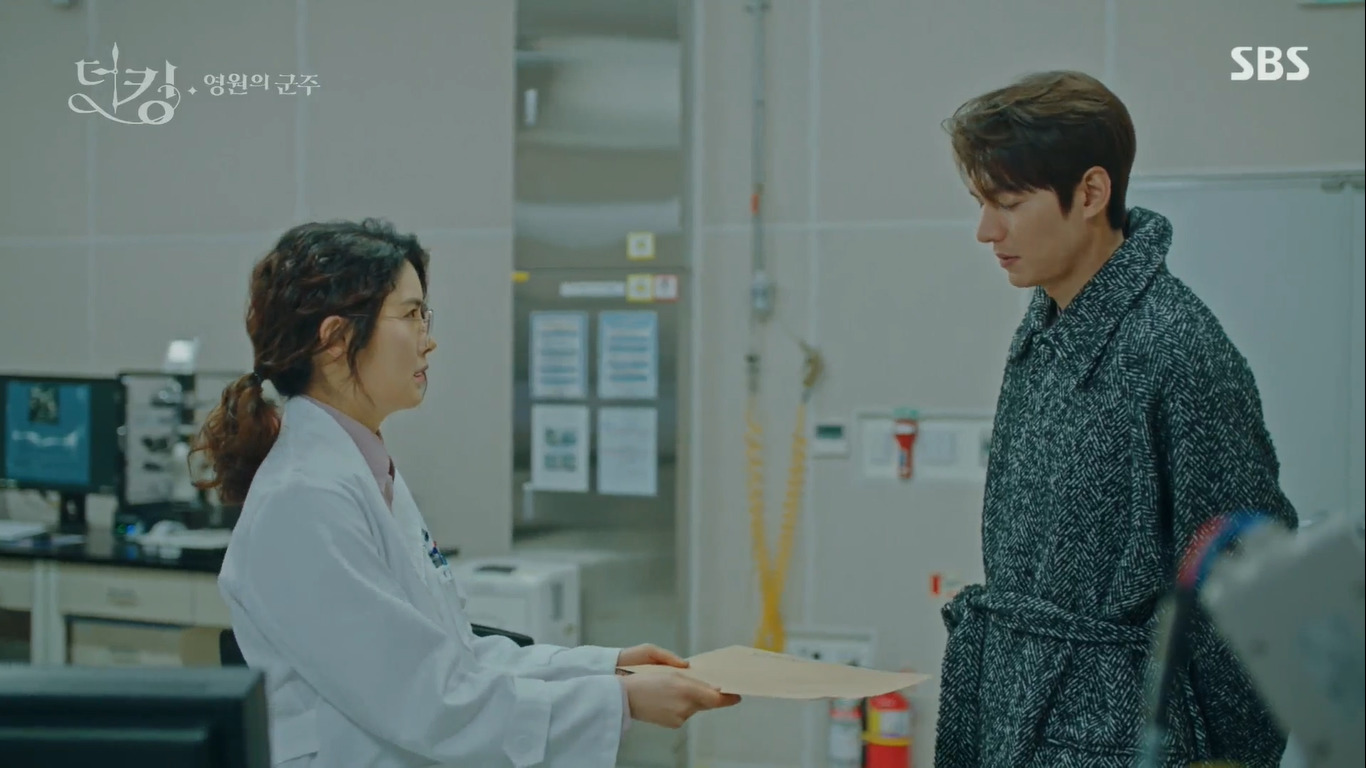 KOREATECH — Campus I’s buildings are featured in many scenes in The King: Eternal Monarch (더킹:영원의 군주) (SBS, 2020). These are as follows:

In episode 4, the Middle Conference Room at this building is where Prime Minister Gu (Jung Eun-chae) and her Cabinet meet to listen to a presentation on a tender for transportation rights of liquid natural gas from Qatar Gas. Angry that they all seem negative, she criticises the presenter and his powerpoint presentation, and instructs her cabinet to find an ally who can put pressure on Qatar. Later, King Lee Gon (Lee Min-ho) visits Prince Buyeon’s (Jeon Moo-song) university office (The Office of the Executive Director, at the same building) to give him a box of Head Court Lady Noh’s traditional doughnuts and to chat about his “exciting travels”. Buyeon urges Gon to get married and produce an heir for the Kingdom, if he still insists on travelling, and Gon accuses him of being from Joseon times. He reminisces about his childhood, asks his Uncle about his exiled family and his loyalties, and then leaves him with a “puzzle”: Lee Lim’s 1995 autopsy report, which was completed by Buyeon. Also, Gon looks out of his study window from this building onto Central Park (aka Joong-ang Square) and sees members of his security detail on guard – organized by Yeong (Woo Do-hwan) just in case he has thoughts of climbing out the window to sneak off again. Which he does!

In episode 5, on her first day in the Kingdom, Tae-eul (Kim Go-eun) joins Gon’s security detail as he visits this university where he gives an inspiring and amusing address to the International Congress of Mathematicians in the Damheon hall. Later and after Gon’s schedule finishes, Yeong gives Tae-eul a bag containing her clothes in the Damheon Lecture Theater , and tells her Gon has said she is free to explore the Kingdom while he is busy. She asks Yeong for money, because she gave his “boss a lot of chicken and stuff in the other world”.

Gon walks through the campus via this park to his next scheduled in episode 5, he uses Yeong’s radio to playfully ask: “Wasn’t I cool?” which was directed at Tae-eul. However, the guards are confused, and scramble to acknowledge that he was indeed cool, in fact one replies: “I’ve thought that for a long time!”

While Gon is waiting at the National Security Agency in episode 12, he receives a call from the police who have CCTV footage for him to view. He asks staff for a private room and computer access, and he is shown into a room in this Center. In episode 13, this Center is now shown as the National Forensic Service, where Gon visits to see the autopsy results of the prisoner he and Yeong captured in the Republic (the owner of the Wangchung Budaejjigae restaurant). The report shows he had a mysterious scar on his chest that resembled a burn, and the officer added that she had seen it previously, on three prisoners who had committed parricide (murder of a parent or close relative). Gon muses that they had all crossed over from the Republic.

In episode 12, this hi-tech engineering lab is portrayed as the Kingdom’s National Security Agency headquarters, where Gon personally asks staff to locate CCTV footage of Tae-eul after she escaped from Lee Lim and his henchmen.

Korea University of Technology & Education (KOREATECH) — Campus I [한국기술교육대학교 제1캠퍼스] was opened in November 1991 by the Korean Government’s Ministry of Employment and Labor to train practical, highly skilled engineers, HRD (Human Resources Development) specialists and TVET (Technical Vocational Education and Training) teachers. This first (out of four campuses) is located in the village of Gajeon [Gajeon-ri/가전리] in Cheonan’s Byeongcheon Township [Byeongcheon-myeon/병천면] in the Dongnam District [Dongnam-gu/동남구].

The university offers programs in seven fields of engineering, AI, computer science, industrial design, industrial management and liberal arts,  with an enrolment of 4,800 students (as of 2018). It prides itself on having a high job placement rate (84.7% in 2020). In 2011, on the 20th anniversary of its founding, the University adopted a new English brand name: KOREATECH.

K-Factory [K팩토리], established in 2019, is the world’s first 5G “Smart Learning Factory (코리아텍 스마트팩토리),” where students can be trained in core and elemental technologies, including the internet, AI, big data, cloud, robotics, 3D printing, IoT (smart devices) and AR/VR (augmented/virtual reality). It is an area where students can research, design, develop and produce practical results on their projects.

ADMIN BUILDING A
University Headquarters [한국기술교육대학교 대학본부]
Geolocation: 36.764554, 127.282626
Middle Conference Room,
The Office of the Executive Director,
window where Gon looks out from his study over Central Park (aka Joong-ang Square) (big arrow)

— submitted by sarahms
— Campus map belongs to its respective owner.