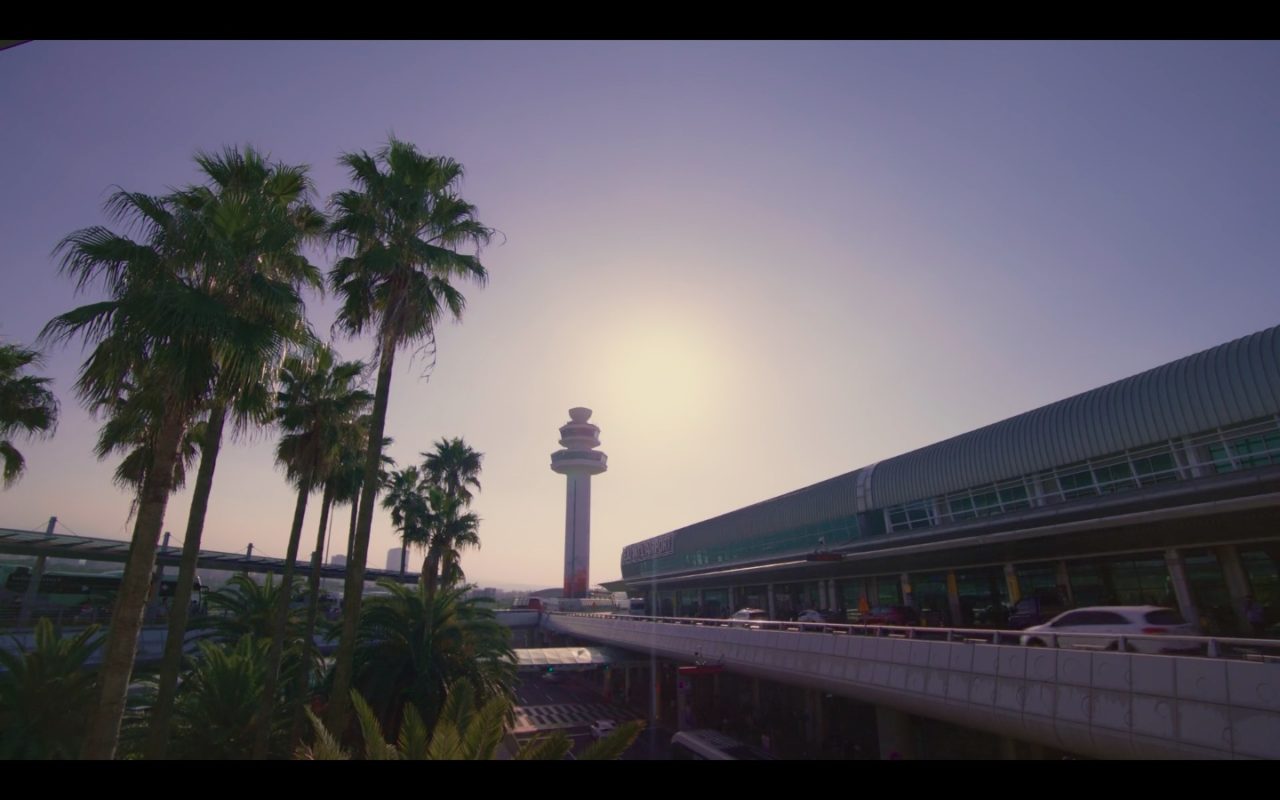 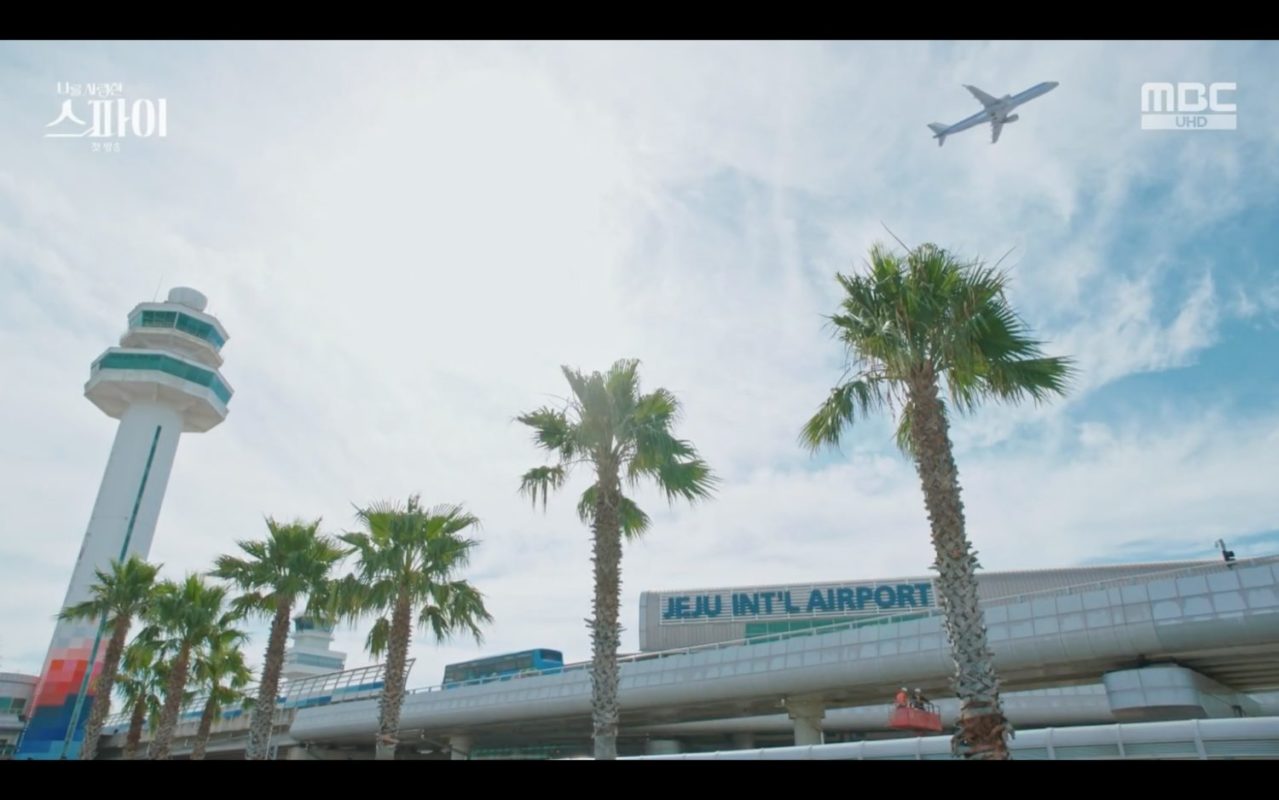 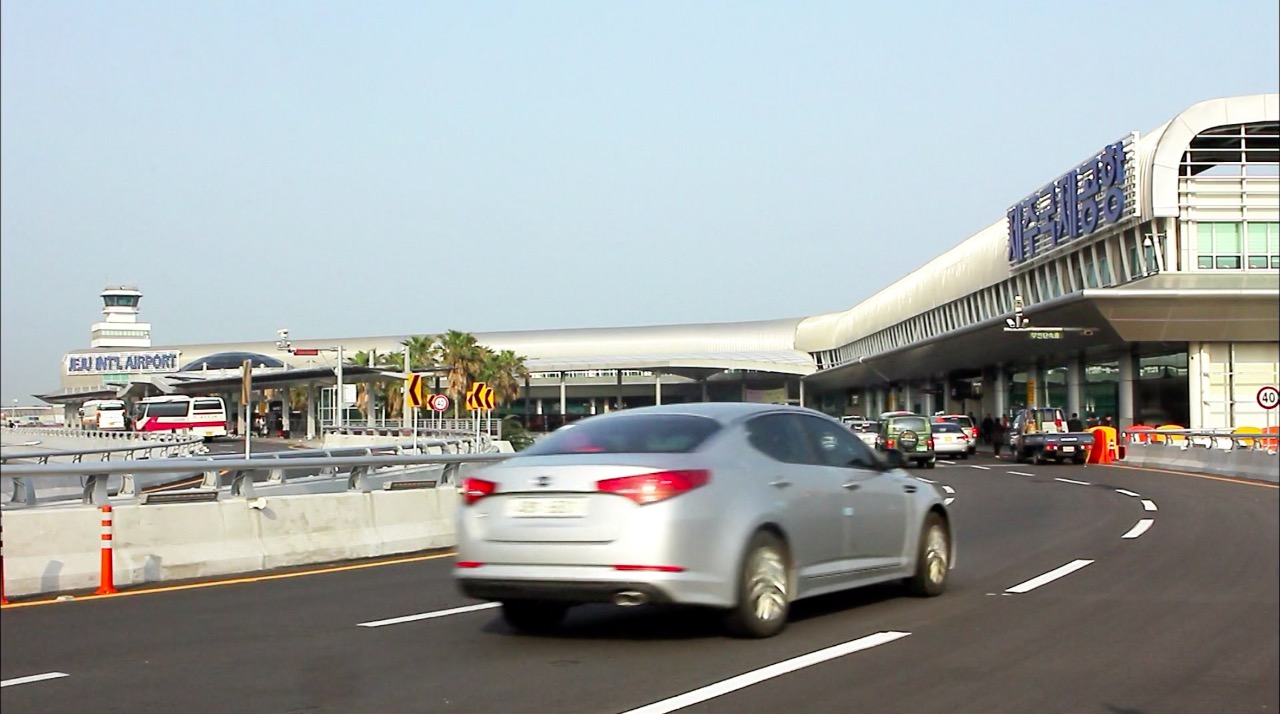 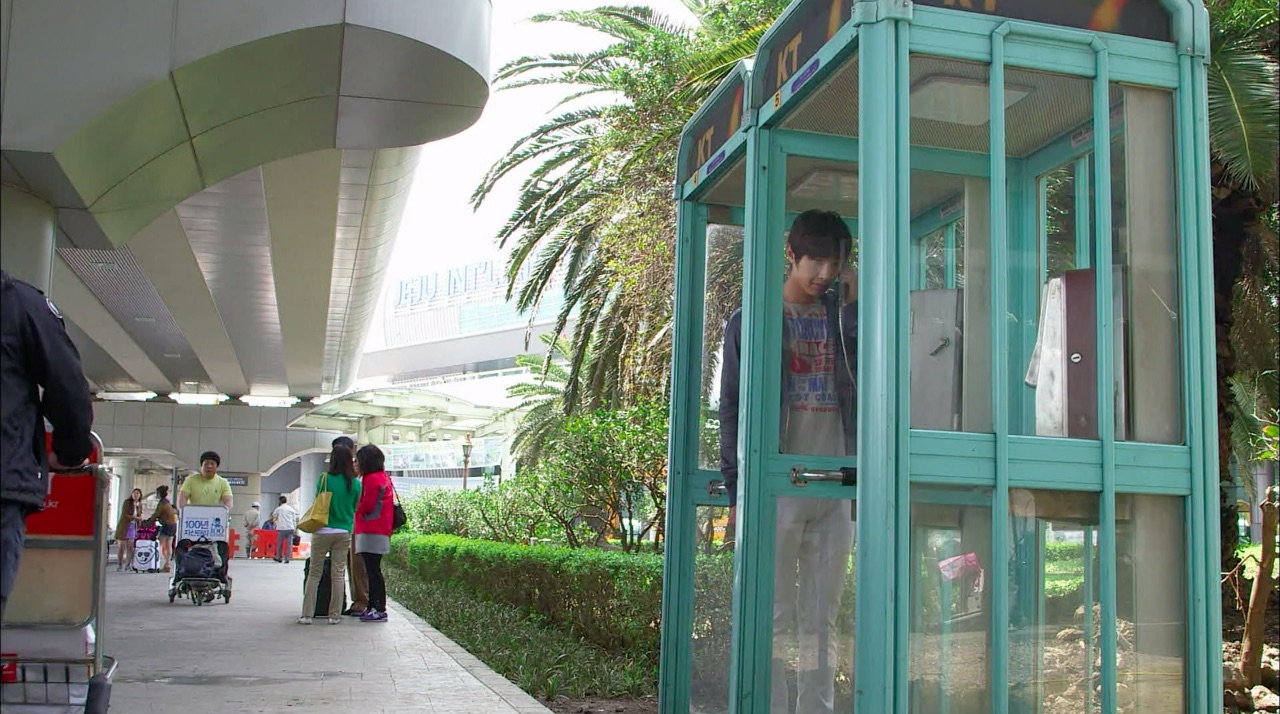 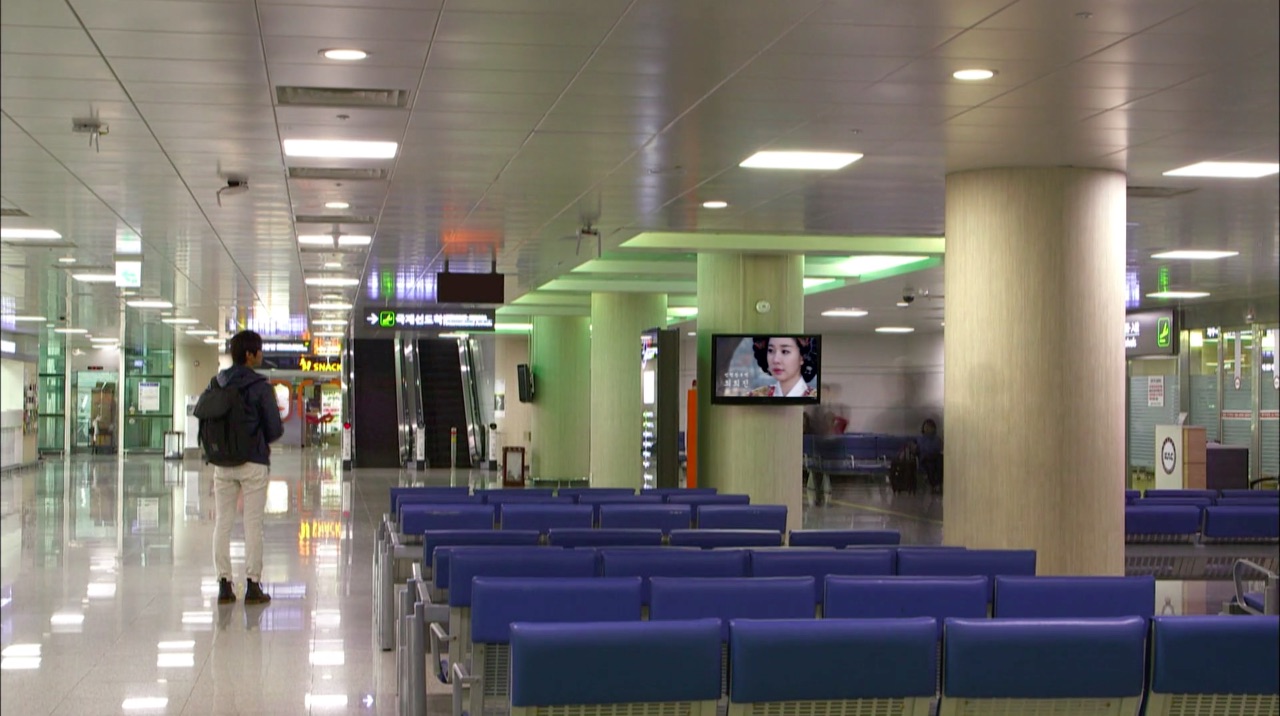 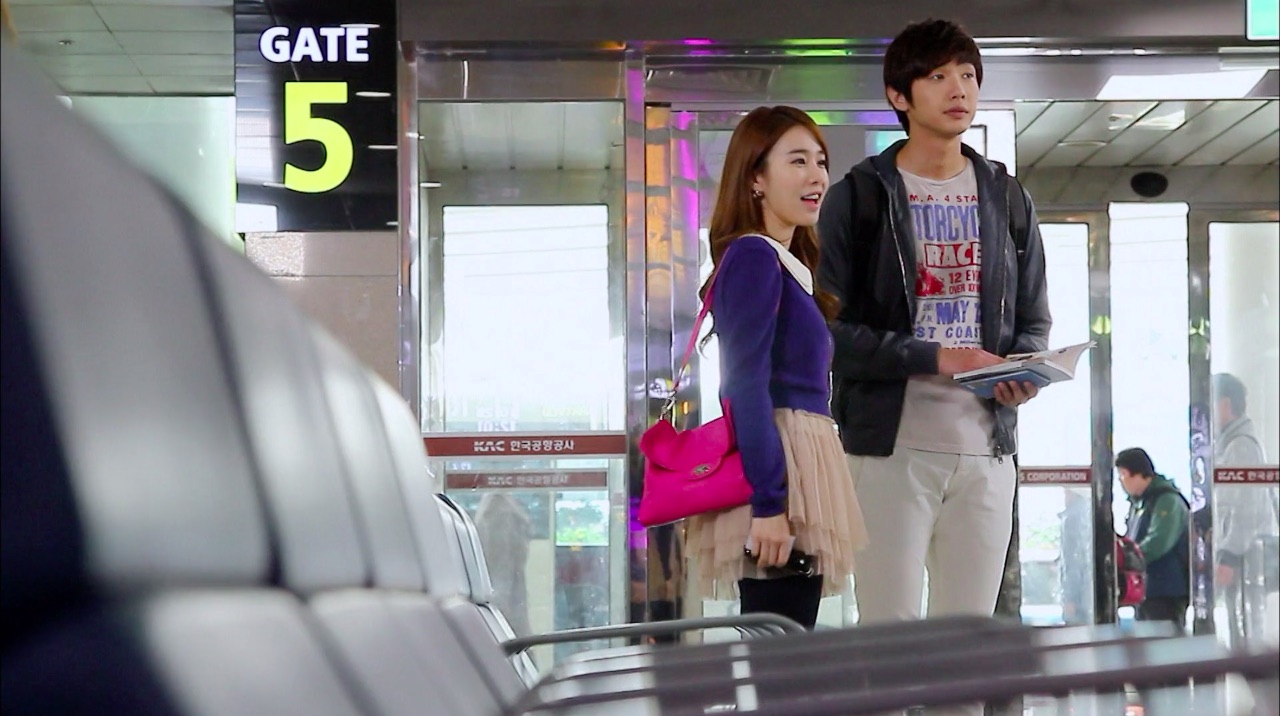 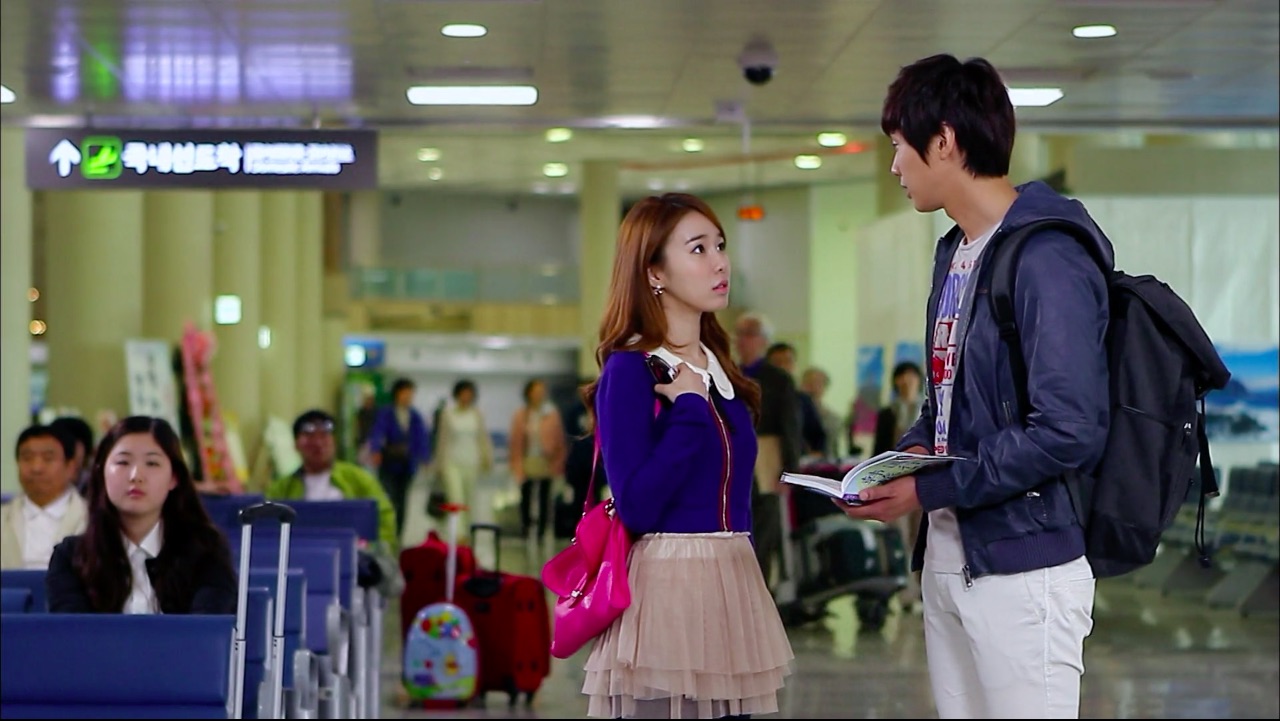 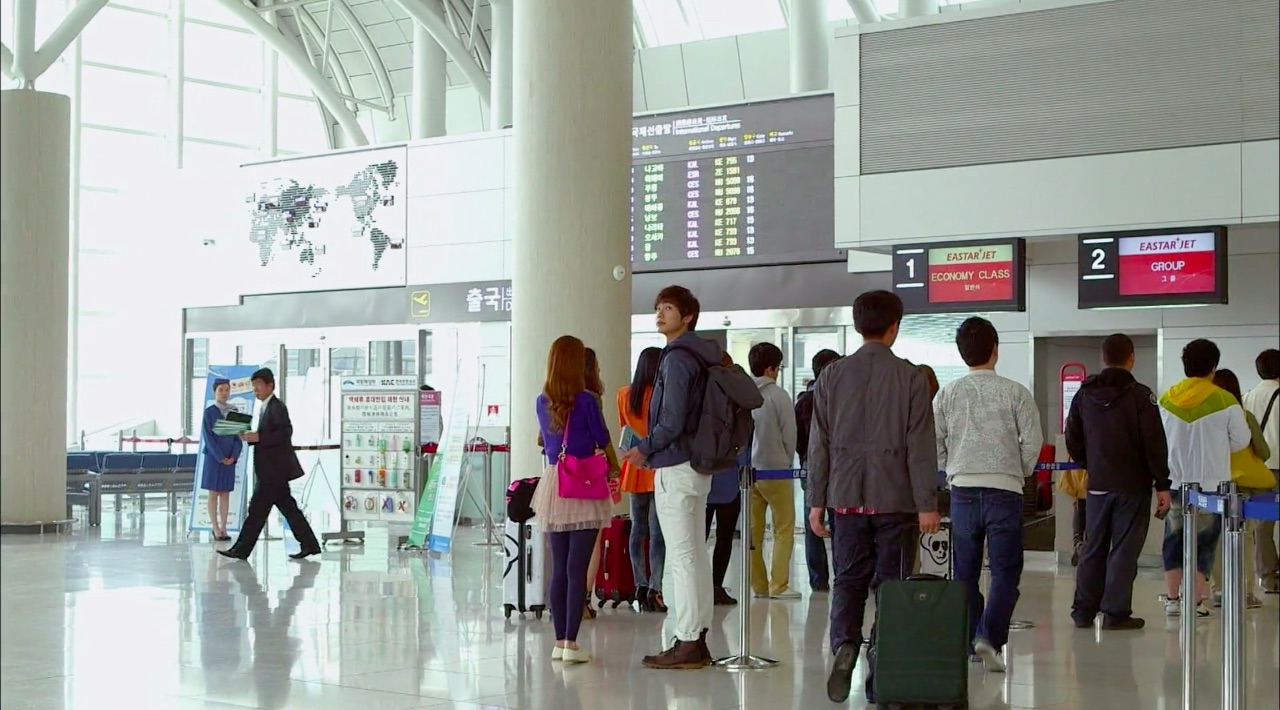 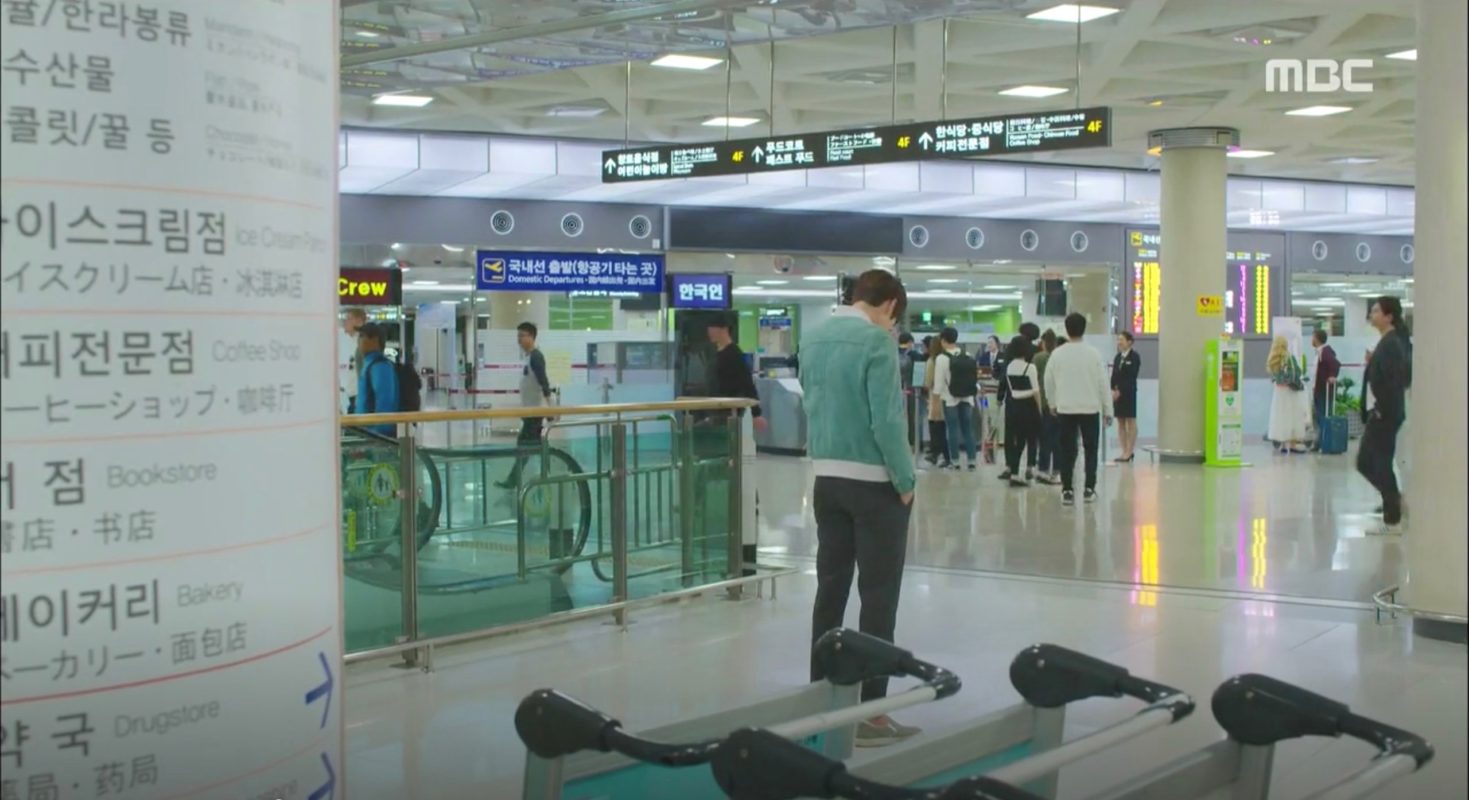 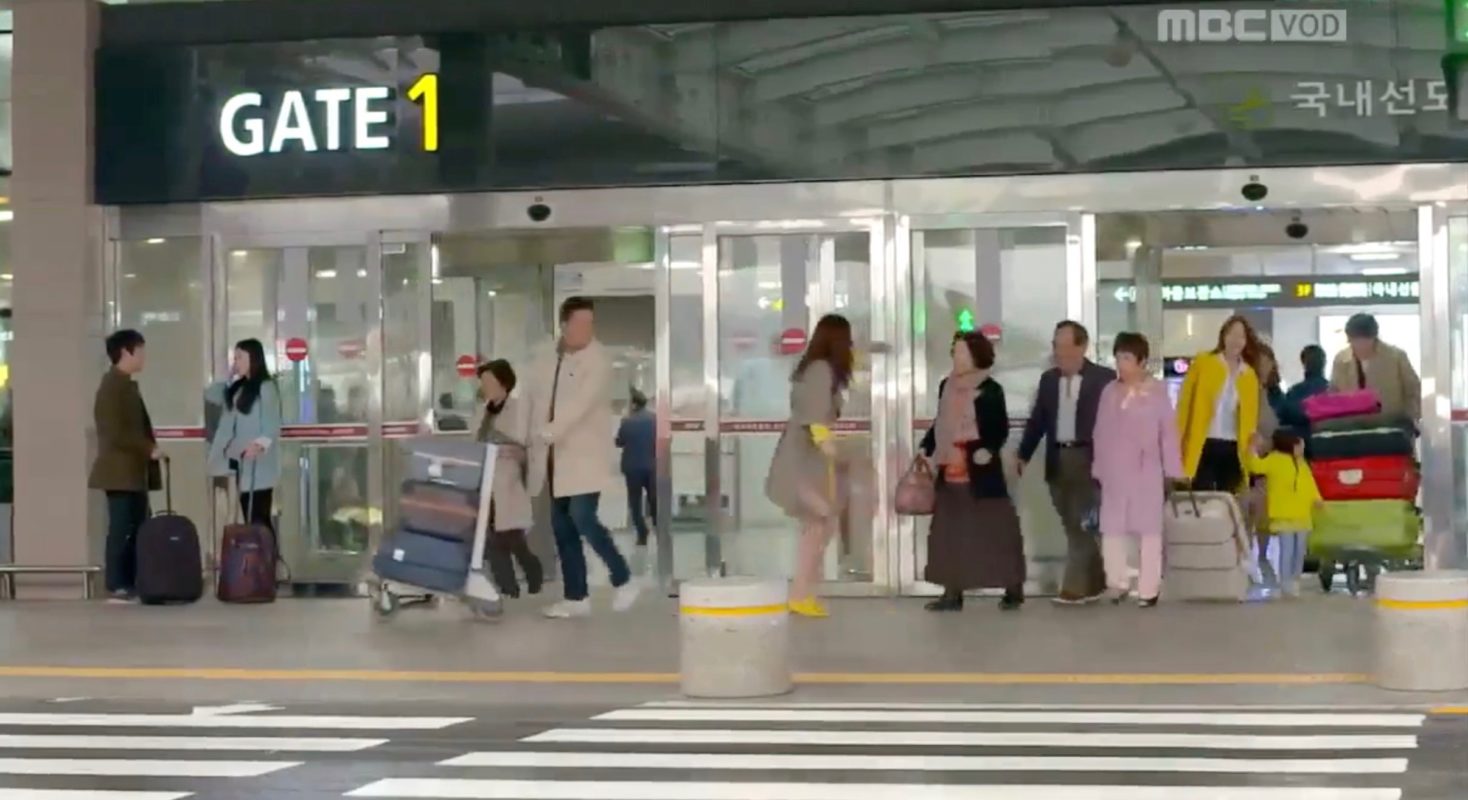 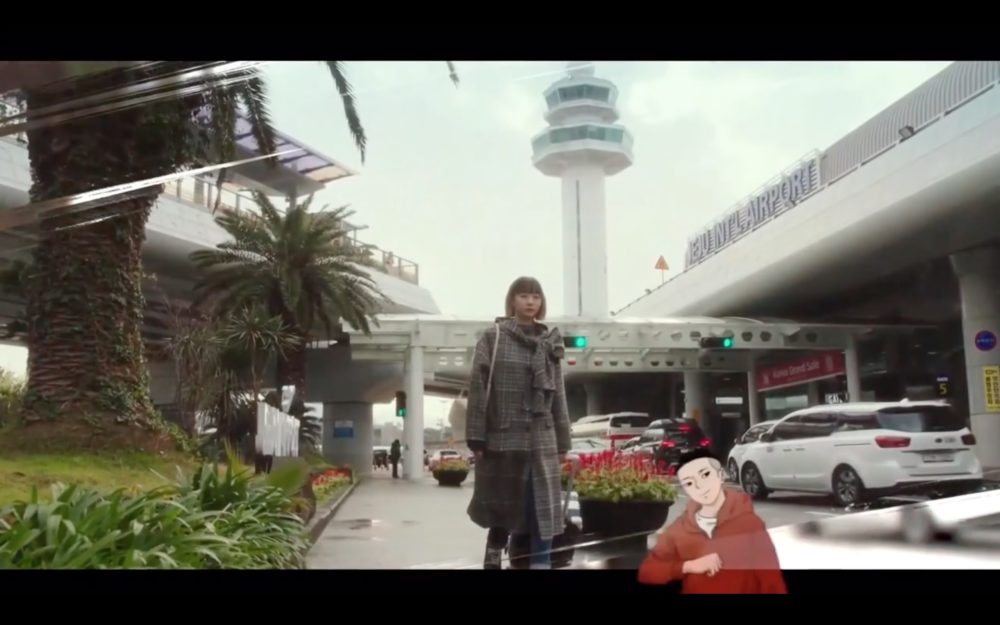 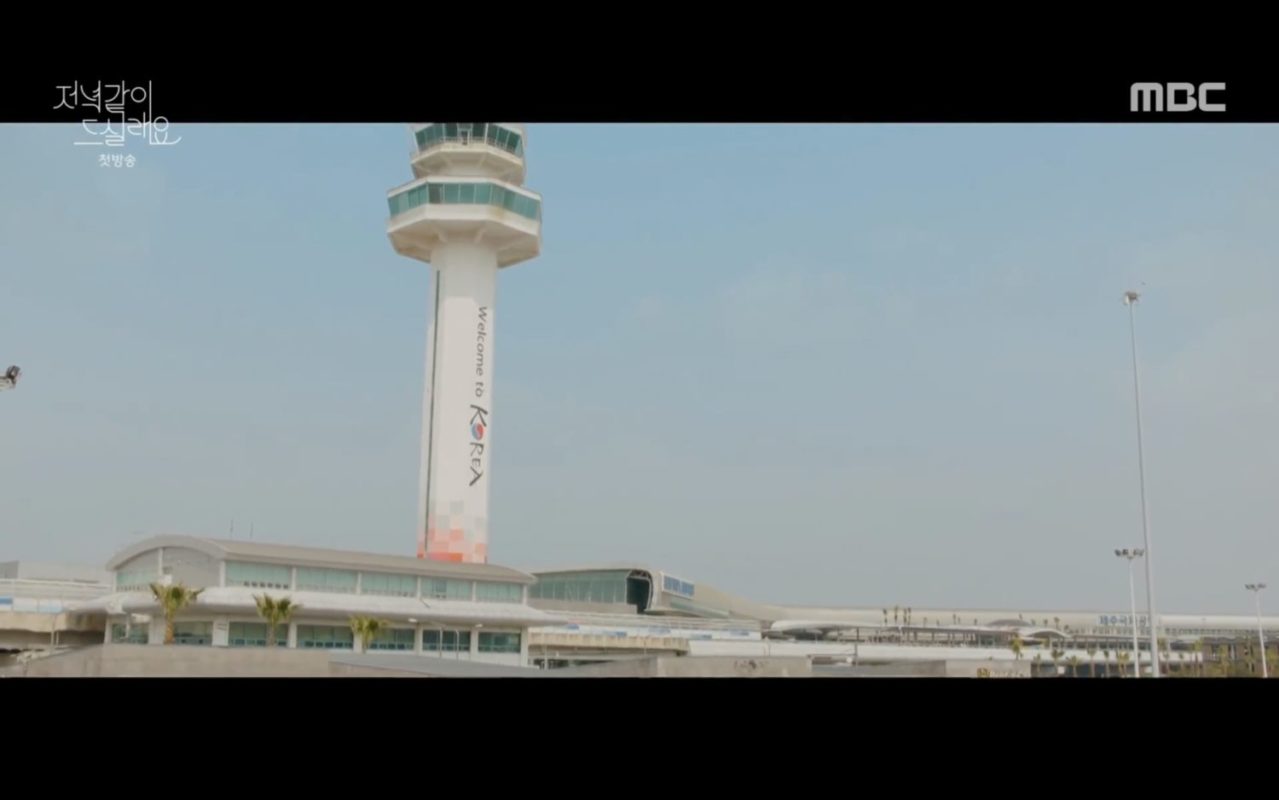 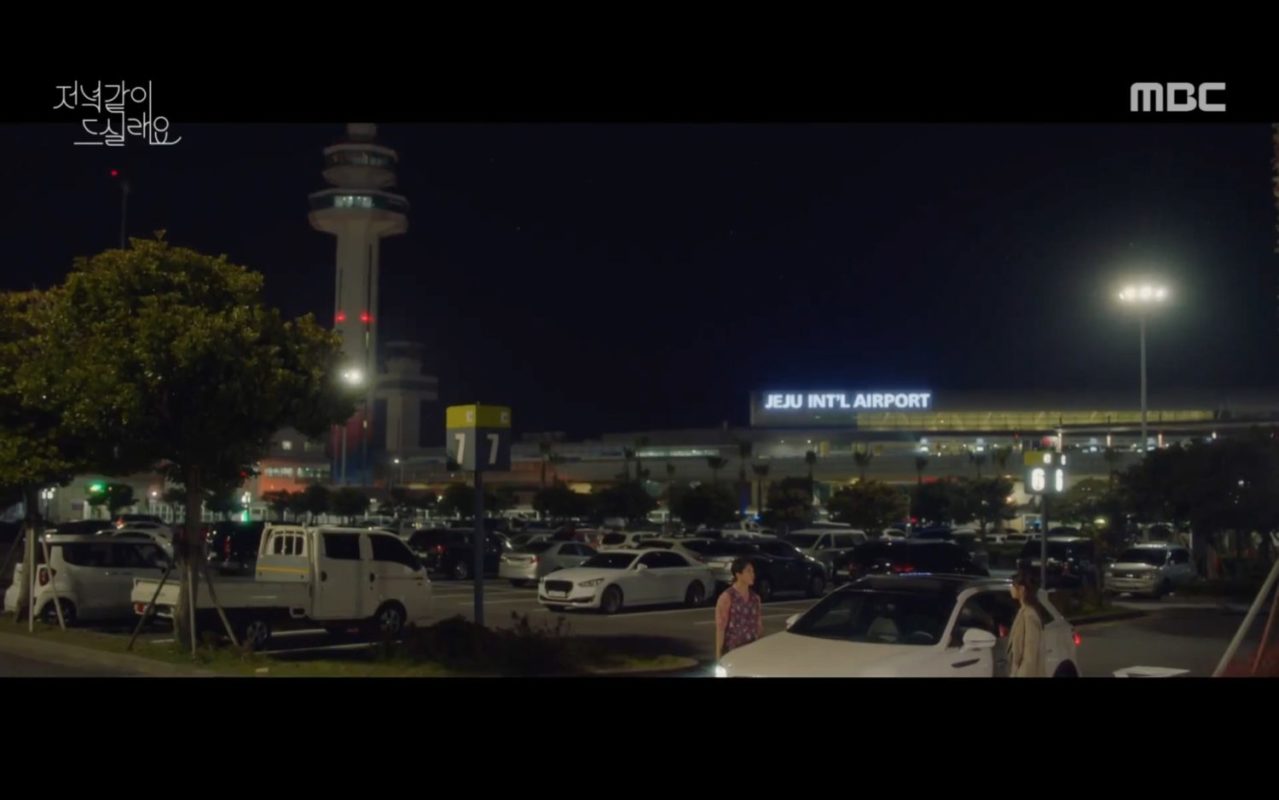 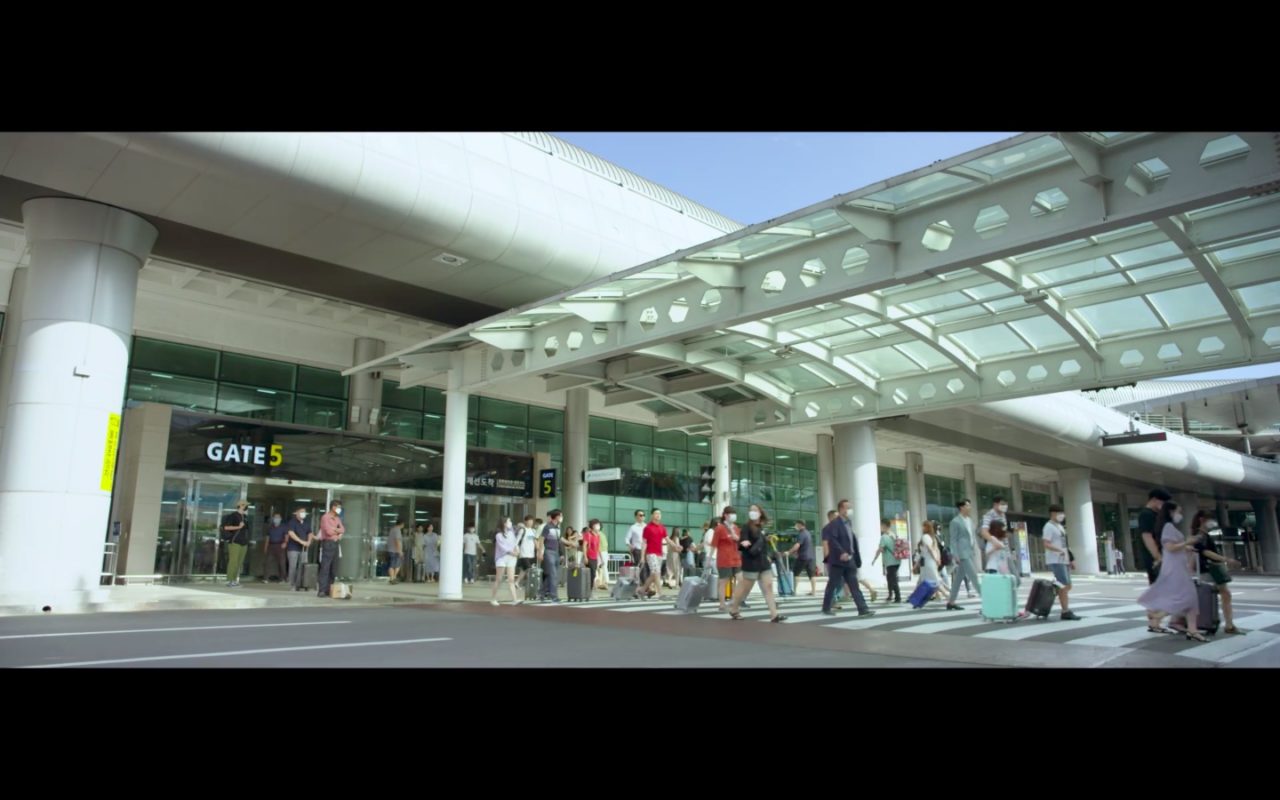 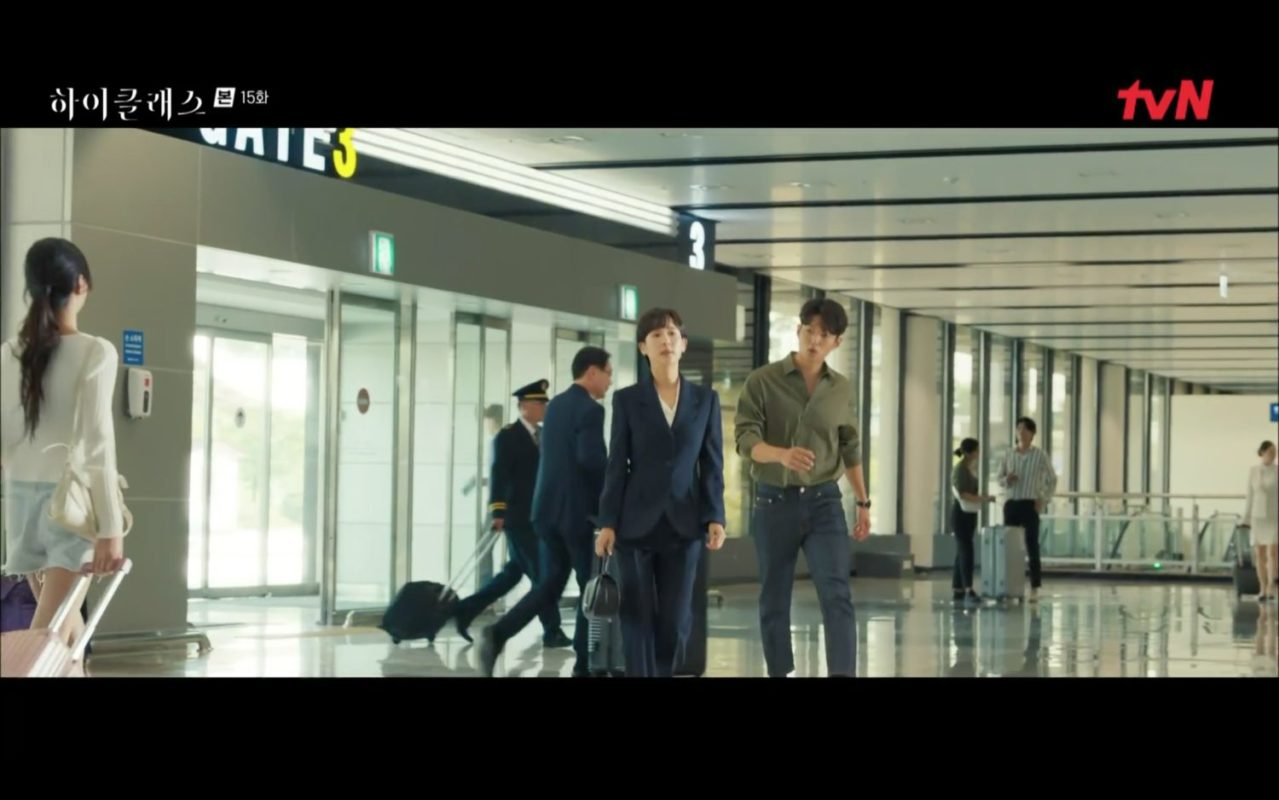 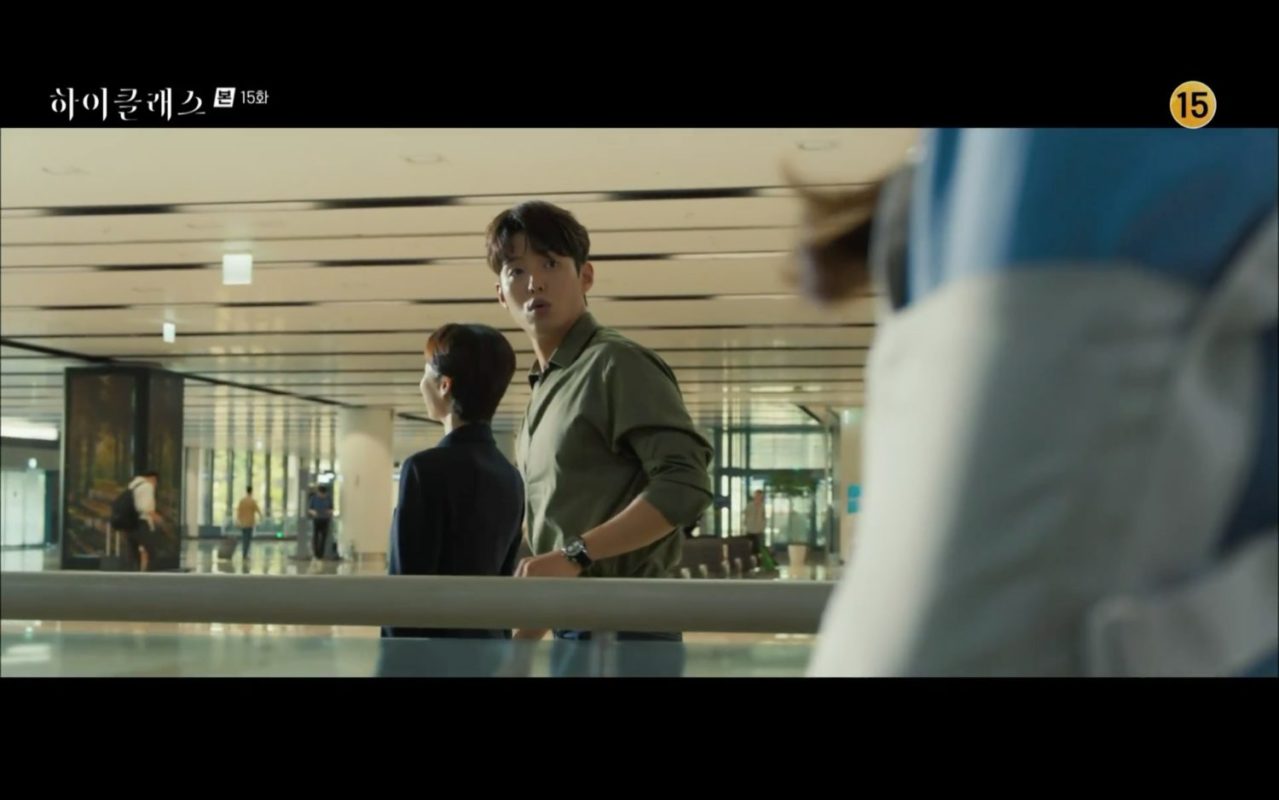 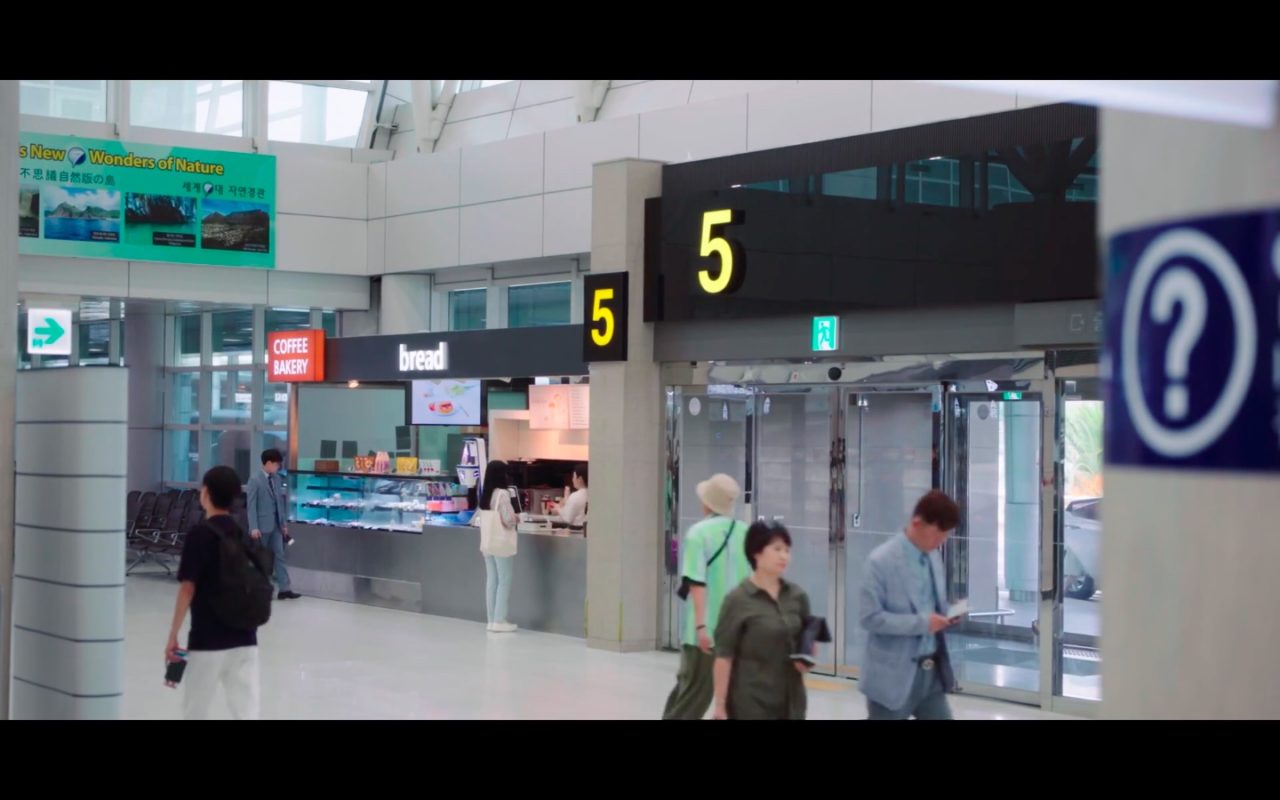 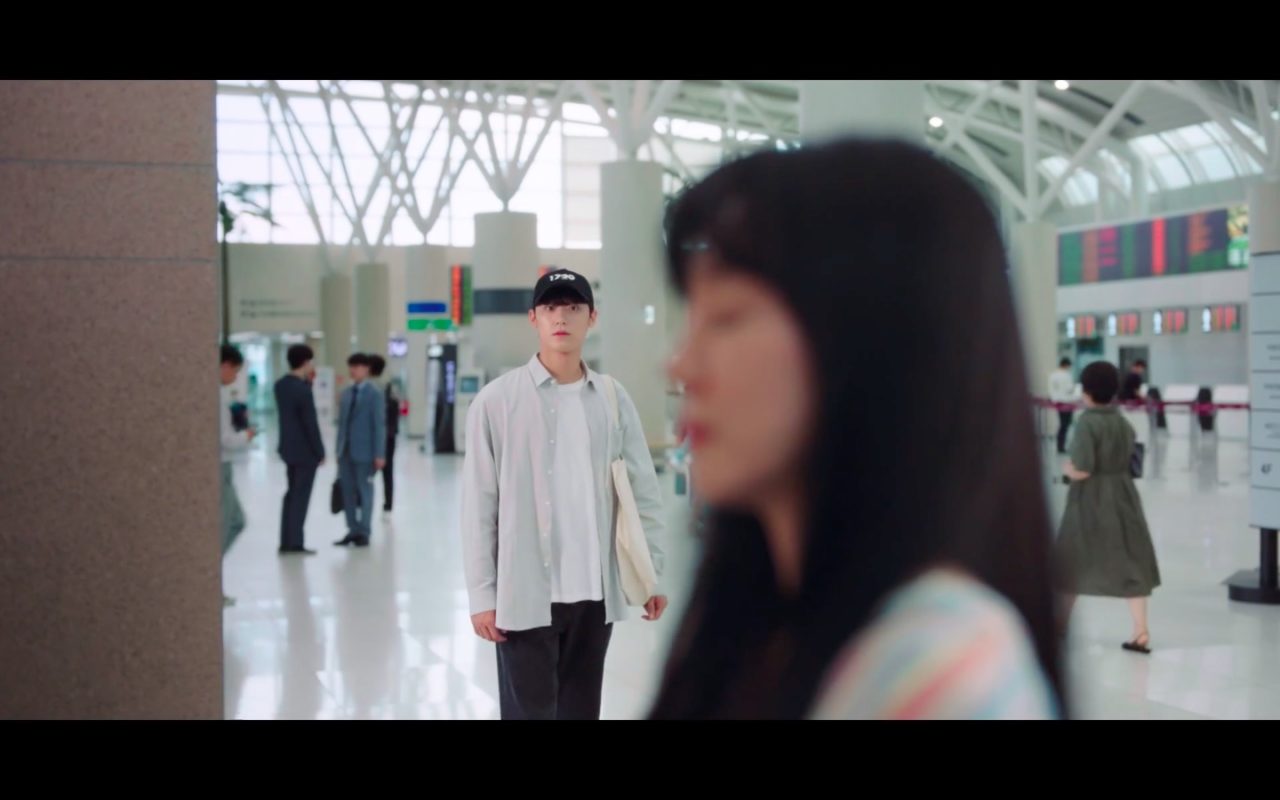 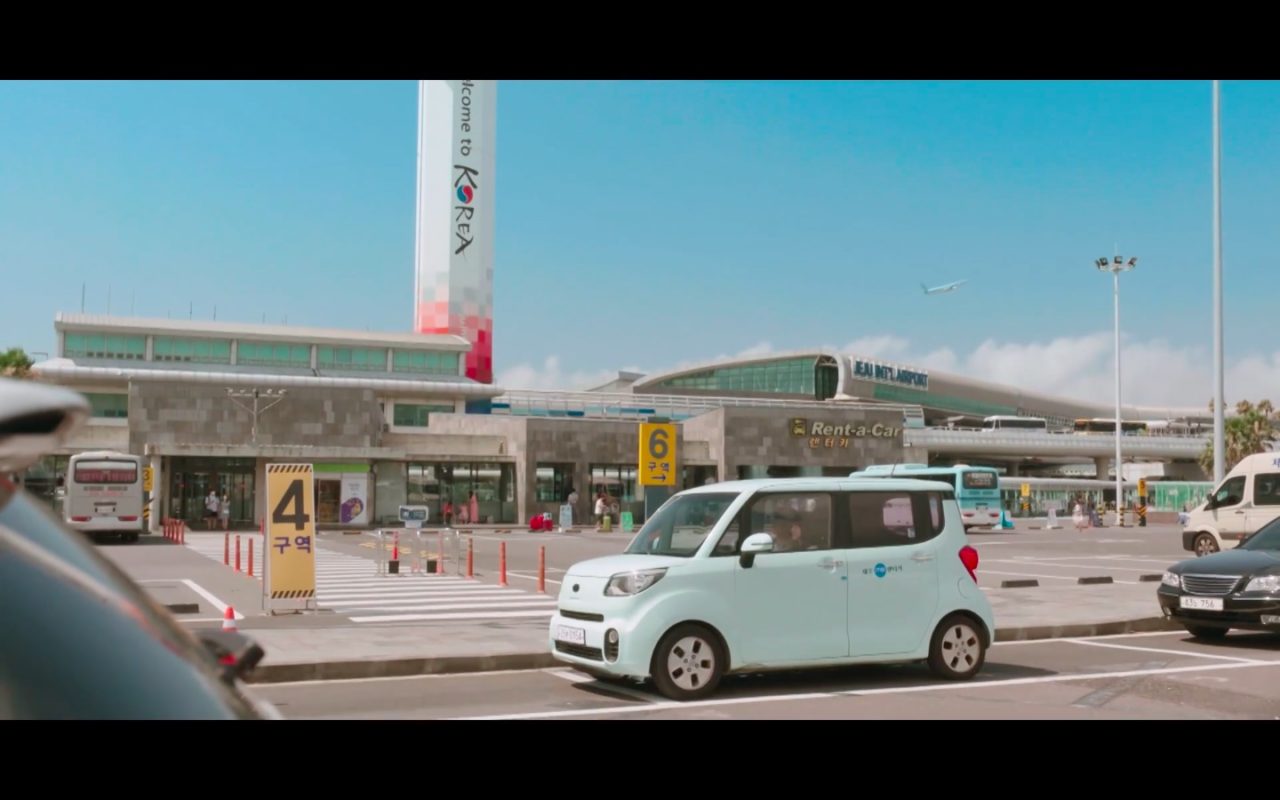 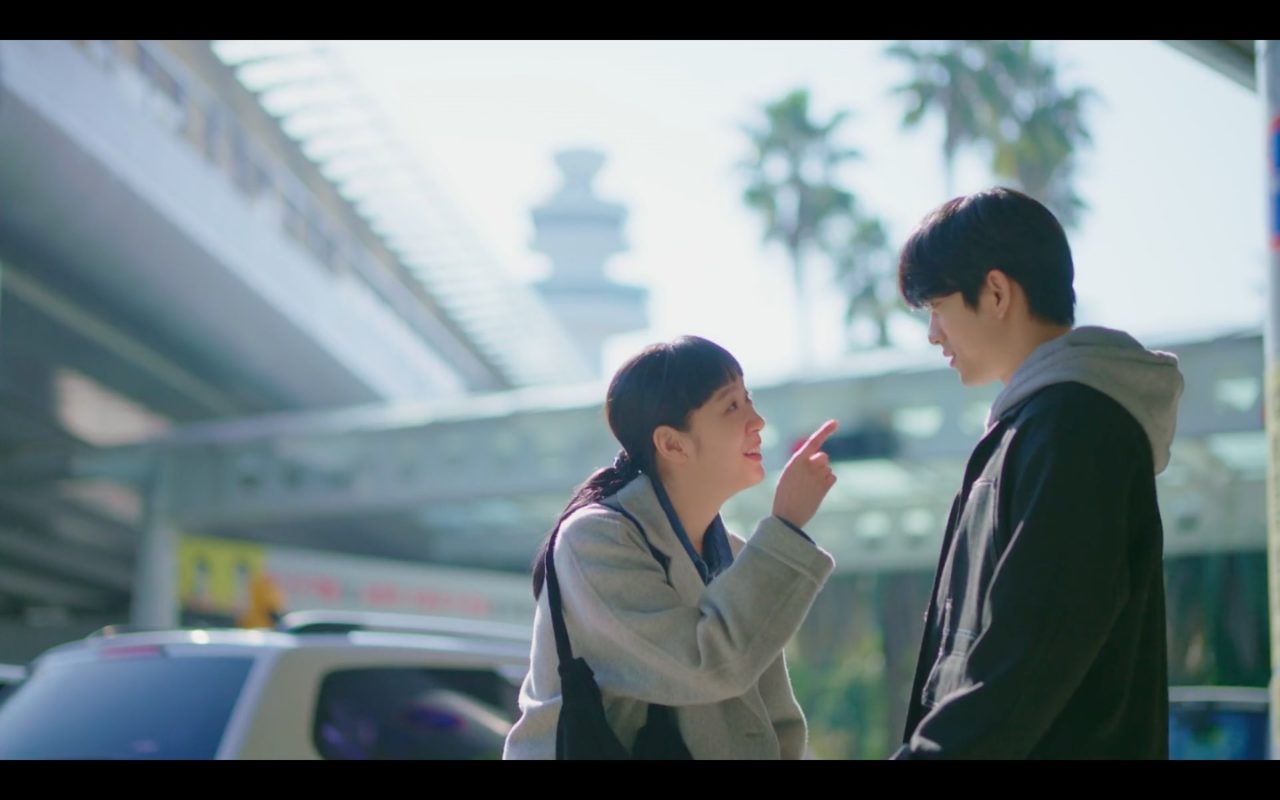 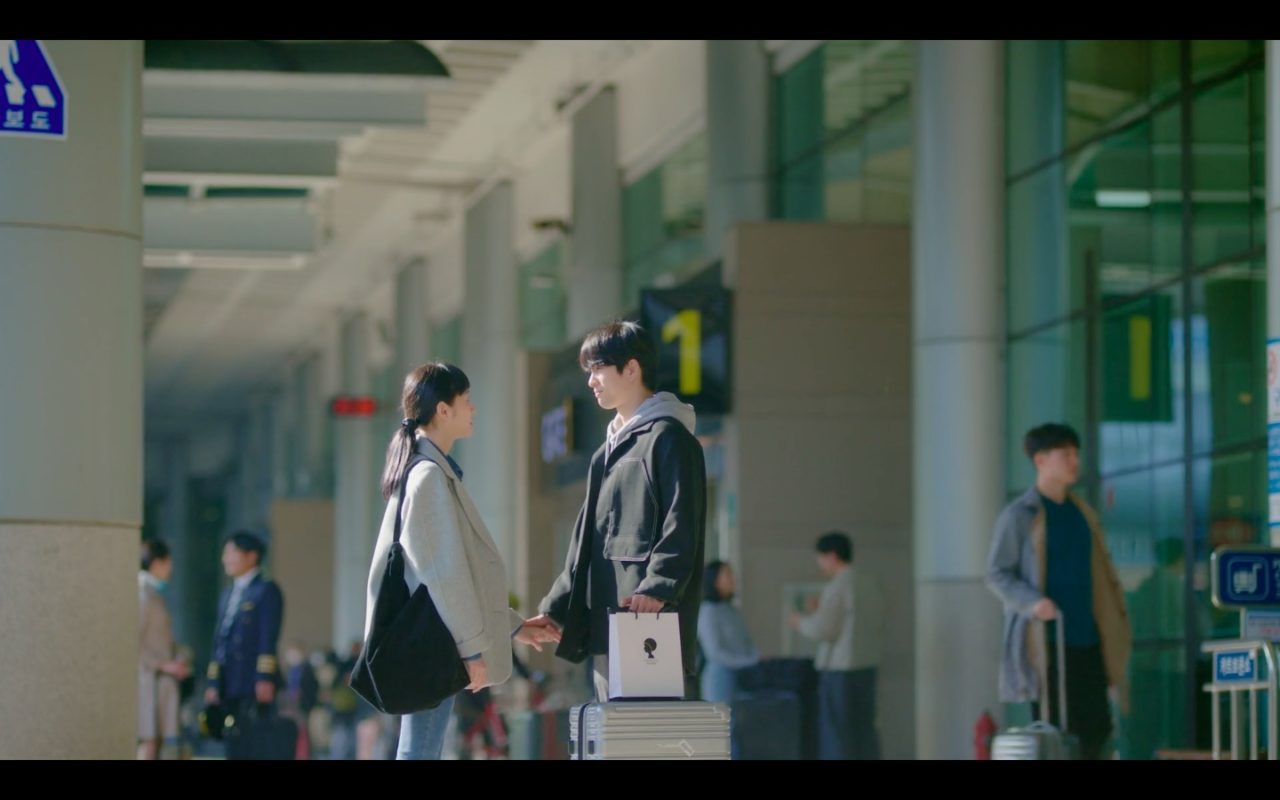 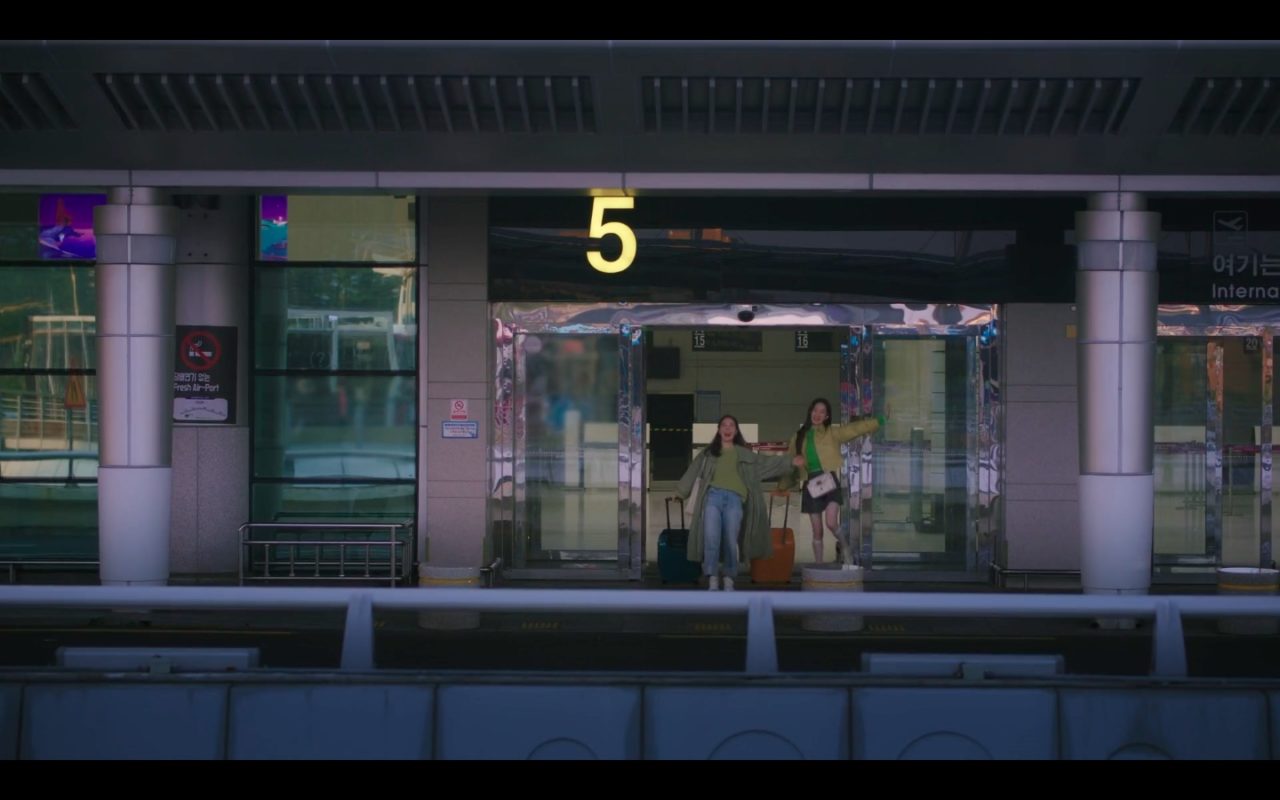 Kim Yu-mi (Kim Go-eun) arrives at this airport and is met by boyfriend Yoo Bobby (Park Jin-young/Jinyoung of GOT7) at Gate 1 in full episode 7 of Yumi’s Cells 2 (Yumiui Sepodeul 2/유미의 세포들 2) (TVING, 2022). Later, Yi-da (Mi Ram) and Ruby (Lee Yoo-bi) arrive in Jeju [SPOILER] to celebrate the publishing of Yu-mi’s manuscript, and are met by Yu-mi and Bobby at Gate 5.

Gong Tae-sung (Kim Young-dae) and Oh Han-byeol (Lee Sung-kyung) arrive here separately for their secret getaway in final episode 16 of Sh**ting Stars/Shooting Stars (Byeolttongbyeol/별똥별) (tvN, 2022), but discover that a drama is being filmed at the airport arrival hall.

Ji Yoon-su (Im Soo-jung) and Baek Seung-yoo (Lee Do-hyun) check into this airport for their flight to Jeju in episode 4 of Melancholia (멜랑꼴리아) (tvN, 2021); unaware that Sung Ye-rin (Woo Da-vi) and her mother Yoo Hye-mi (Pyeon Jung-su) were also there. Note: This airport was the setting for both the one in Seoul/Incheon and Jeju.

Ha Song-yi (Bang Min-ah, formerly of Girl’s Day) flies into this airport with the other contest winners in episode 1 of Check Out The Event (이벤트를 확인하세요) (MBC, 2021).

Oh Mi-joo (Shin Se-kyung) arrives at this airport for her interpreter job for the national Track & Field team in episode 3 of Run On (런온) (JTBC/Netflix, 2020-21) and is picked up by Ki Seon-gyeom (Im Si-wan) and his sister Ki Eun-bi (Ryu Abel).

Kyung Woo-yeon (Shin Ye-eun) arrives at this airport for “two weeks of healing” in episode 2 of More Than Friends/Number Of Cases (Kyeongueui Su/경우의 수) (JTBC, 2020); which is her way to put it that she comes here for part-time job, which is at least in a nice environment.

Woo Do-Hee (Seo Ji-Hye) arrives at this airport when she wants to make a surprise visit for his boyfriend Young-Dong’s (cameo by Kim Jung-hyun) birthday in episode 1 (full episode 1) of Dinner Mate/Would You Like To Have Dinner Together (저녁 같이 드실래요) (MBC, 2020). Later in episode 2 (full episode 1), Do-hee drives Kim Hae-kyung (Song Seung-heon) to this airport –after crossing paths at her boyfriend’s café and some other incidents– because he has a return flight. But going through check-in, he decides otherwise and joins Do-hee who is still parked on the airport’s parking loz.

Baek Gun-woo (Yoo Yeon-seok) brings Lee Jung-joo (Kang So-ra) to this airport in episode 1 of Warm and Cozy (맨도롱 또똣) (MBC, 2015) when she returns to Seoul after her visit.

Everyone travels to Jeju Island in episode 30 of The Legendary Witch (전설의 마녀) (MBC, 2014-15) and arrives at this airport.

Kim Boong-do (Ji Hyun-woo) calls up Choi Hee-jin (Yoo In-na) from a phone booth at this airport in episode 6 of Queen In-Hyun’s Man (인현왕후의 남자) (tvN, 2012). He’s unable to leave Jeju as he does not have the identification or money to buy a plane ticket. On that same day, Hee-jin buys a ticket for herself and her manager, Jo Soo-kyung (Ga Deuk-hi), and meets Boong-do in Jeju.

Jeju International Airport [제주국제공항], which began operations in 1968, is Jeju island’s main airport and South Korea’s second largest airport behind Incheon International Airport. Aside from domestic routes within Korea (with most passengers flying out of Gimpo Airport), it also serves regional flight routes to Japan, China and Taiwan, and international routes to Malaysia, The Philippines and Thailand. This airport is located in Jeju’s neighborhood Yongdam-2(i)-dong [용담2동] on Jeju Island [Jeju-do/제주도].