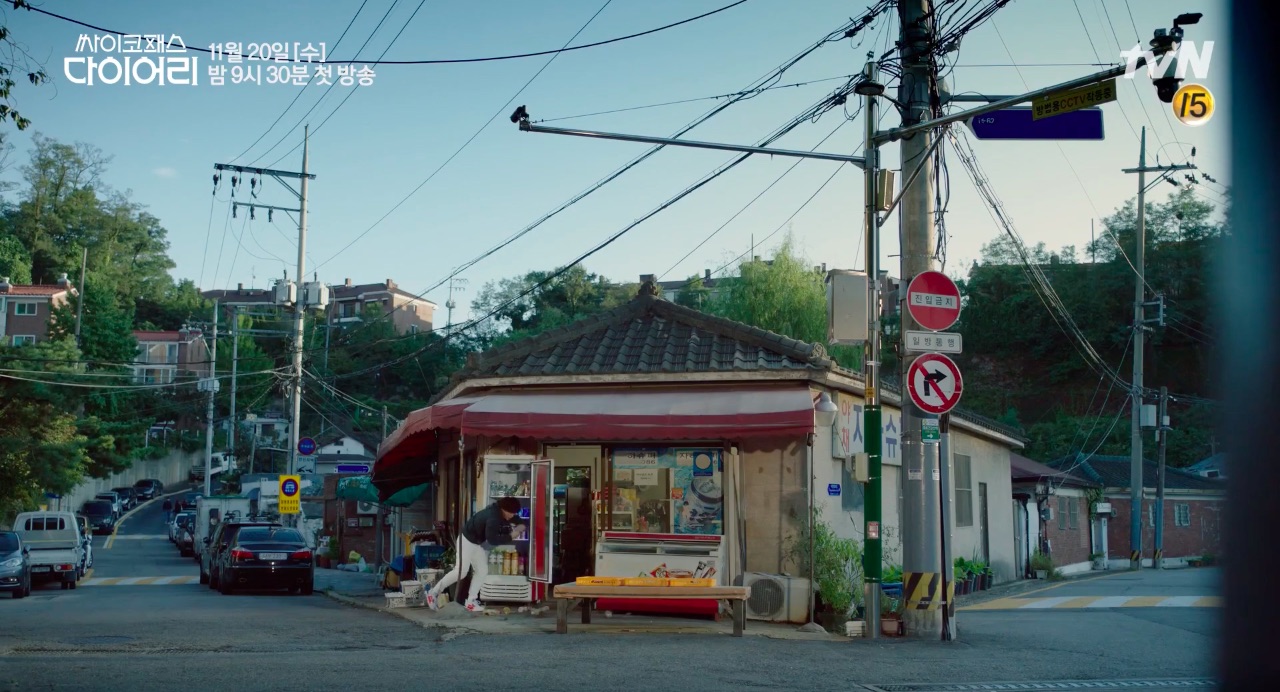 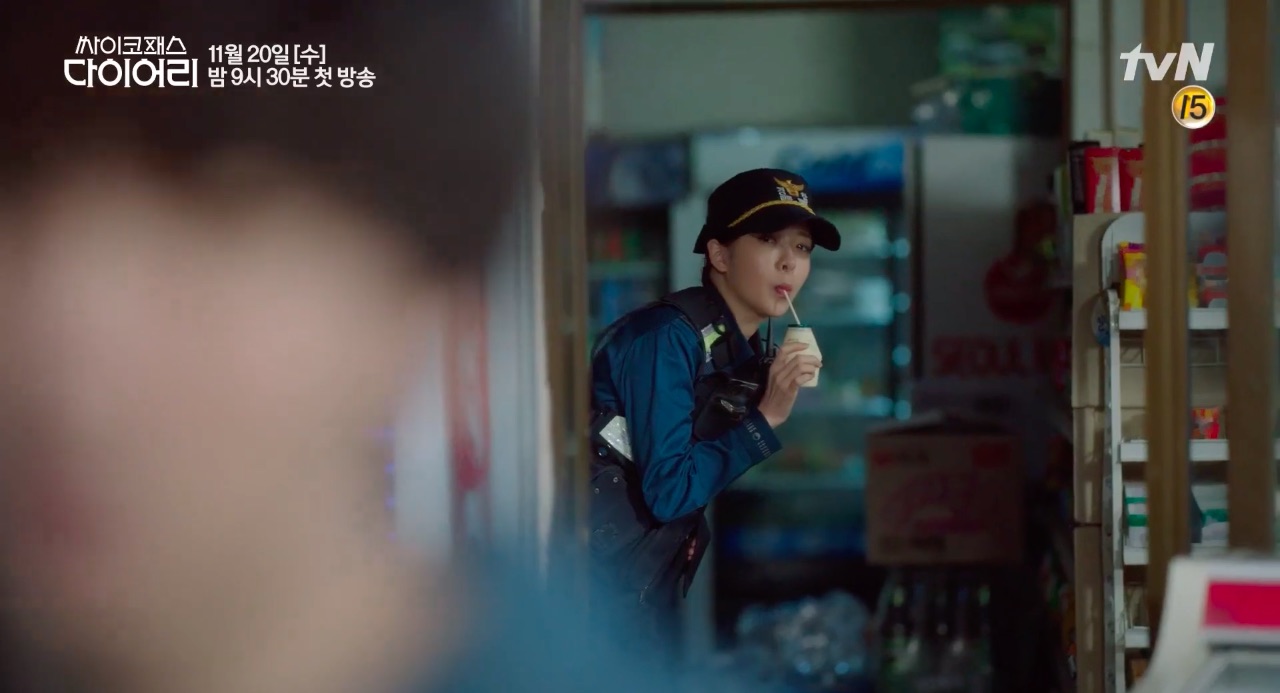 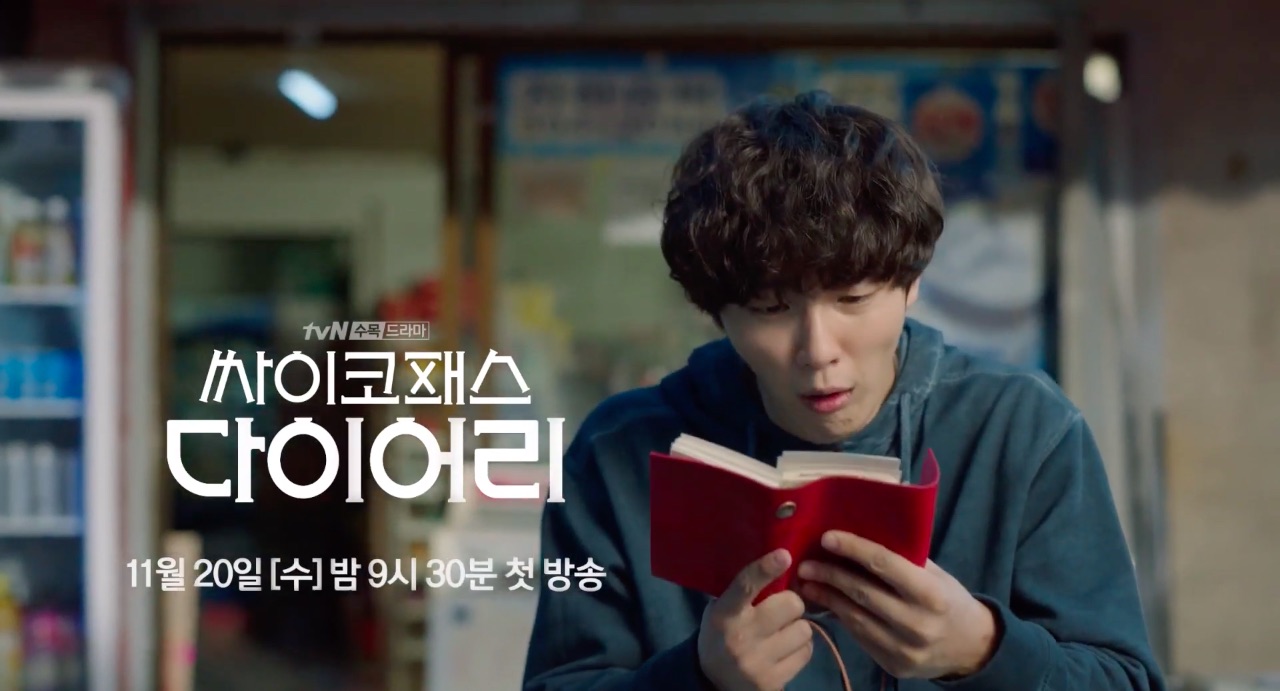 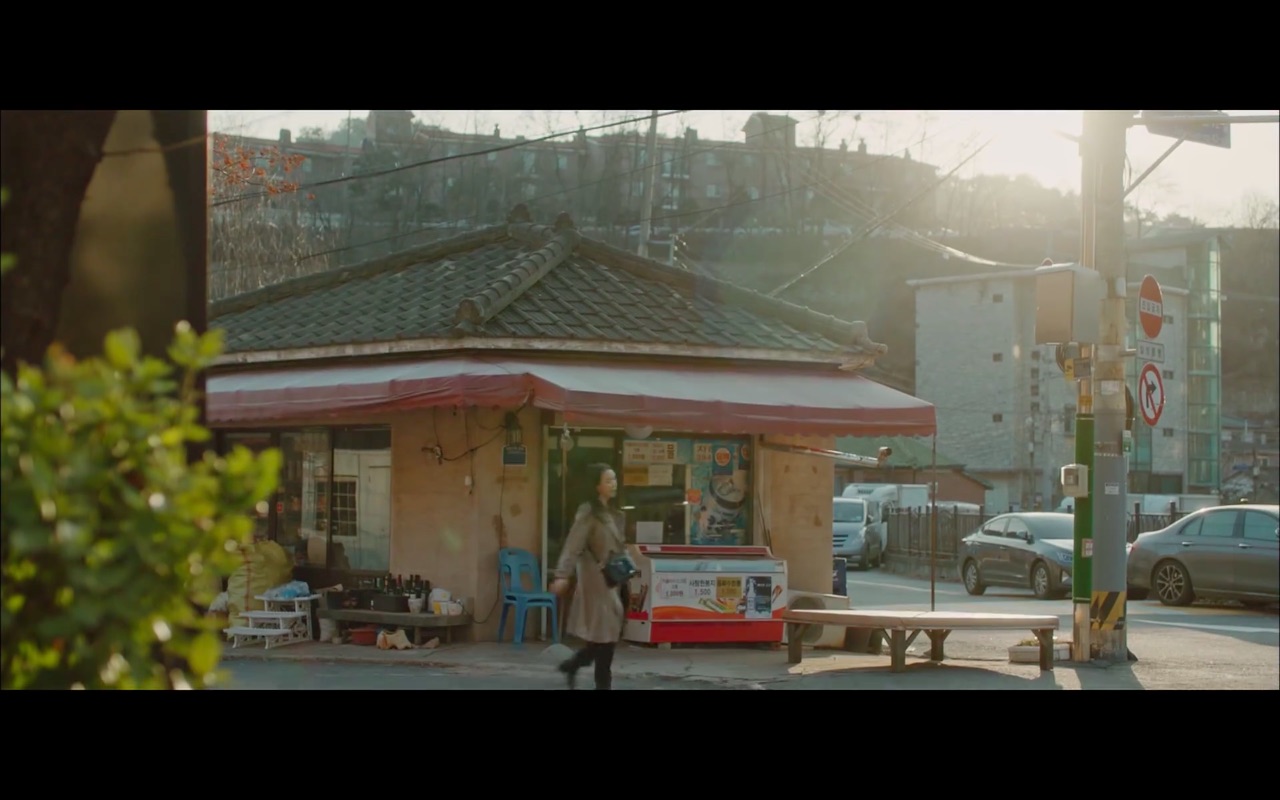 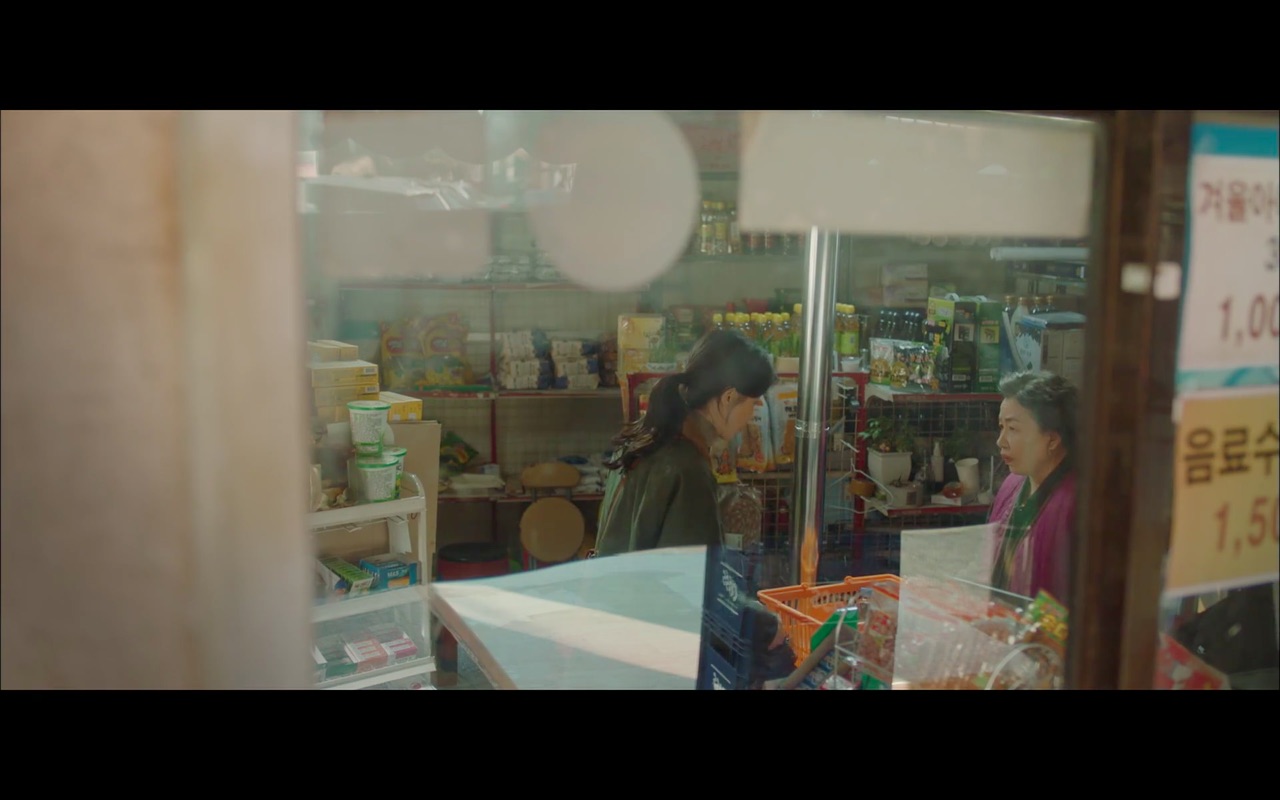 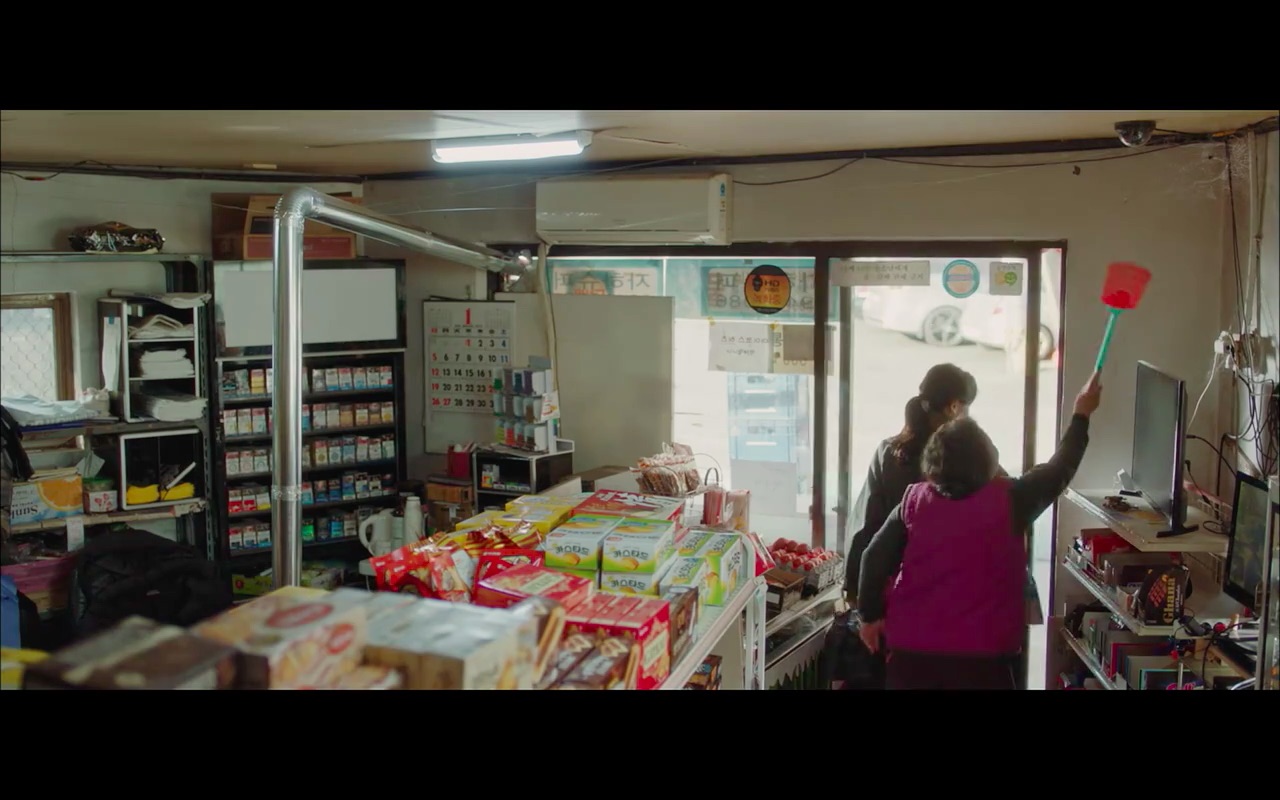 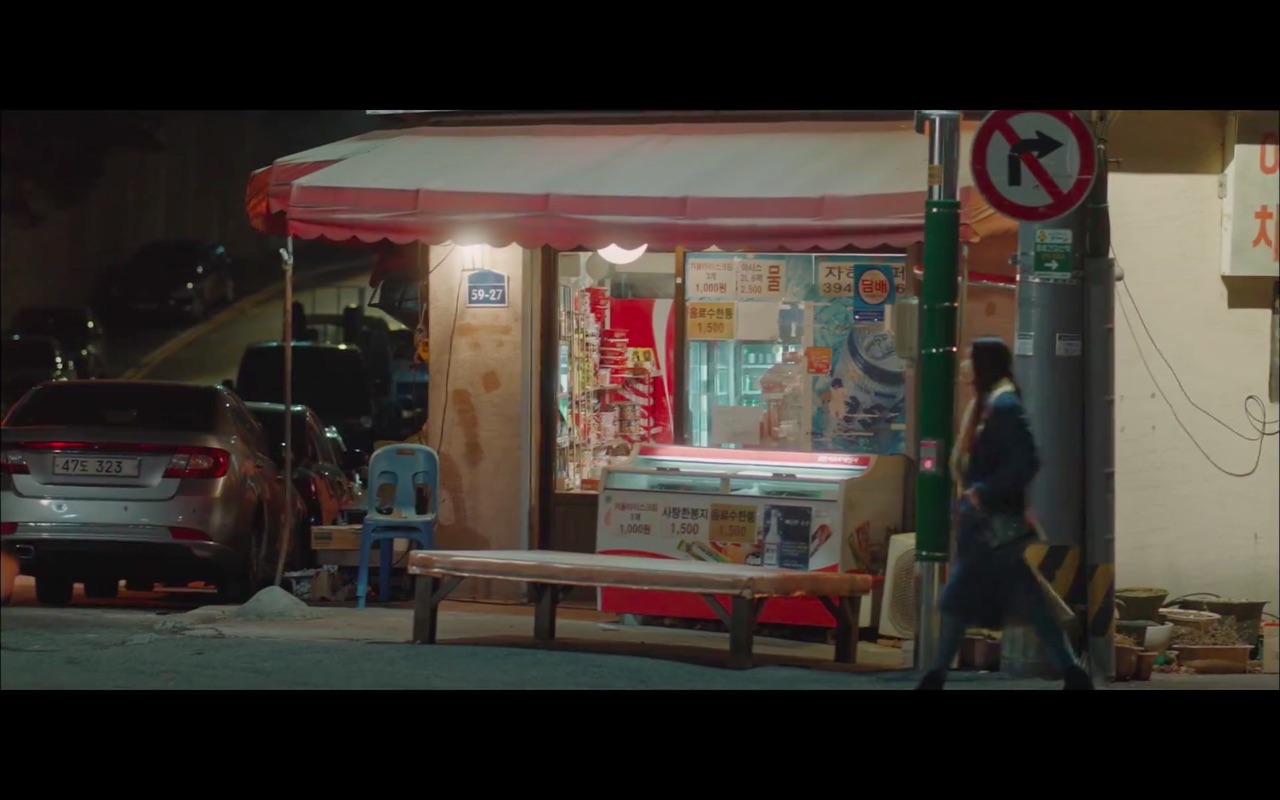 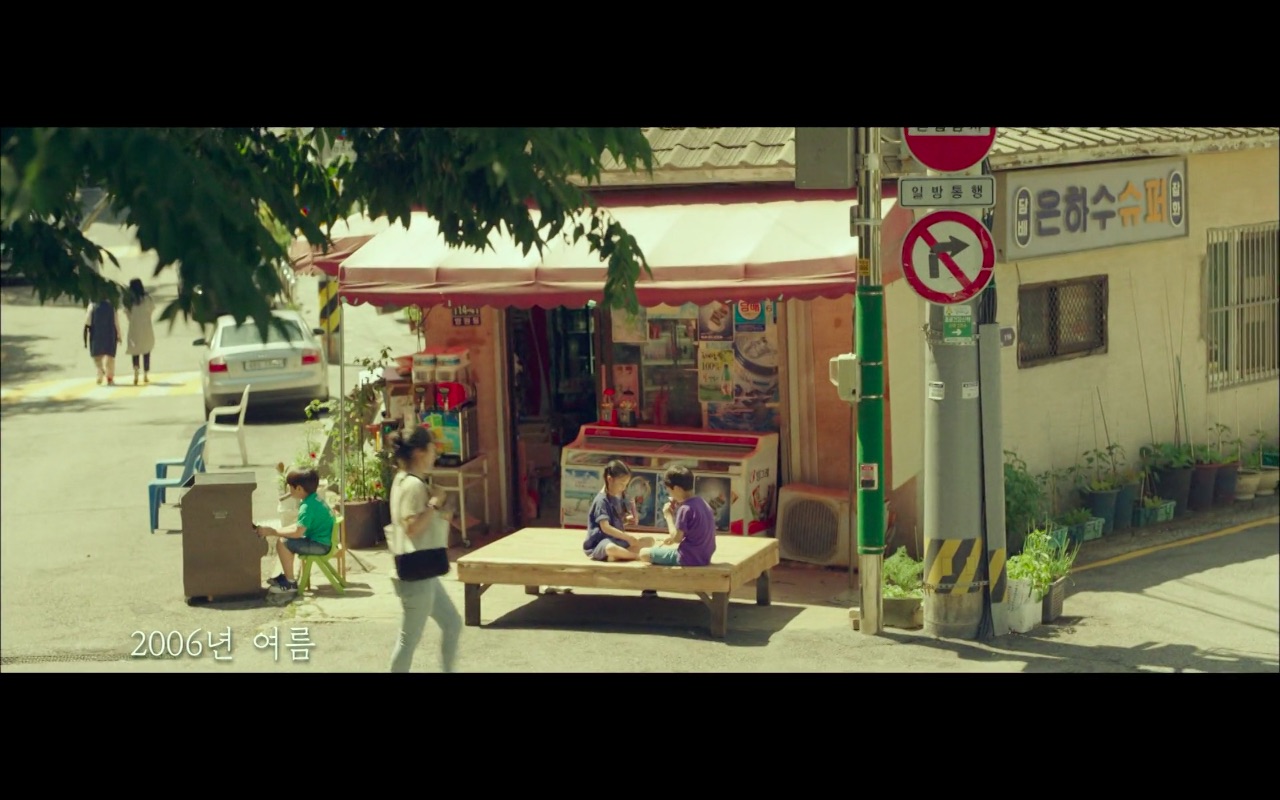 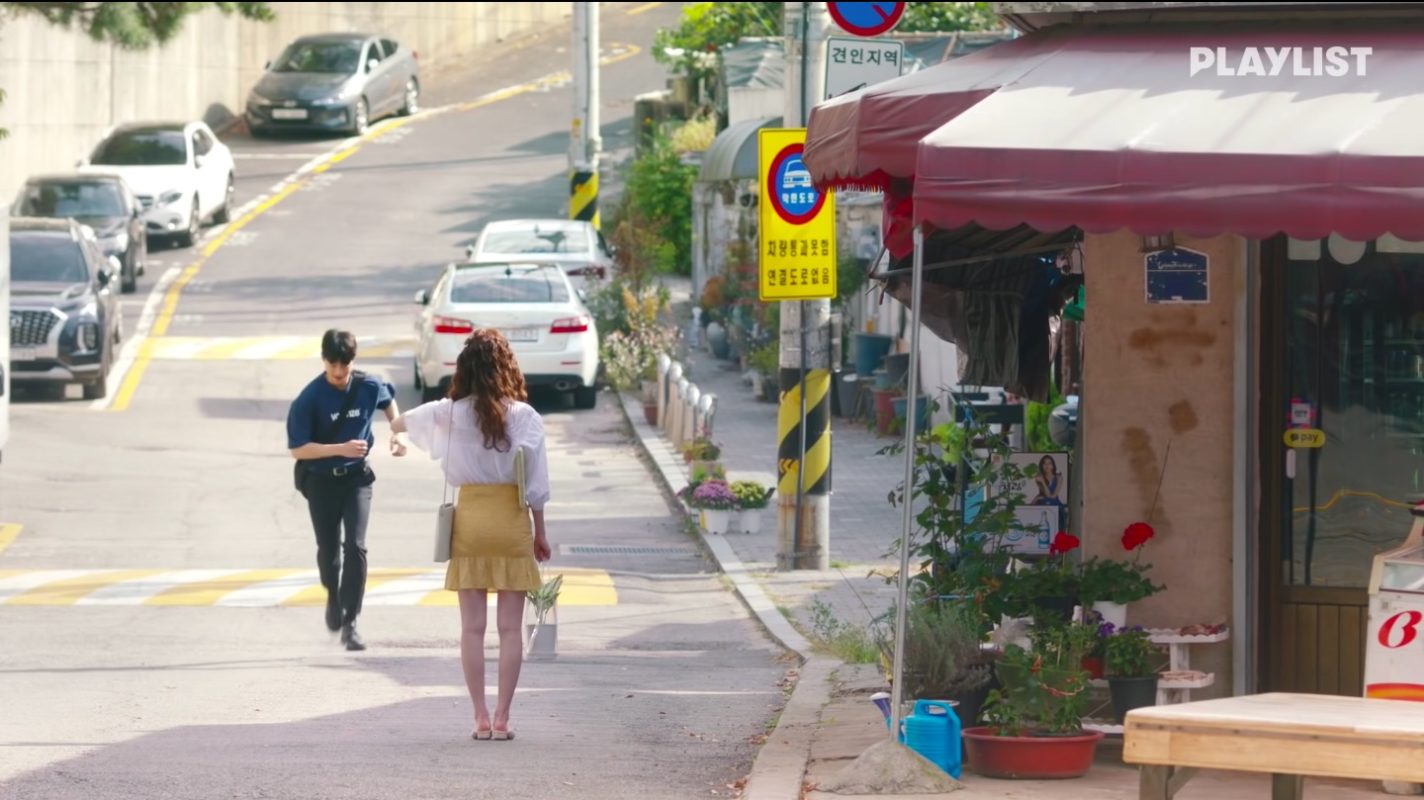 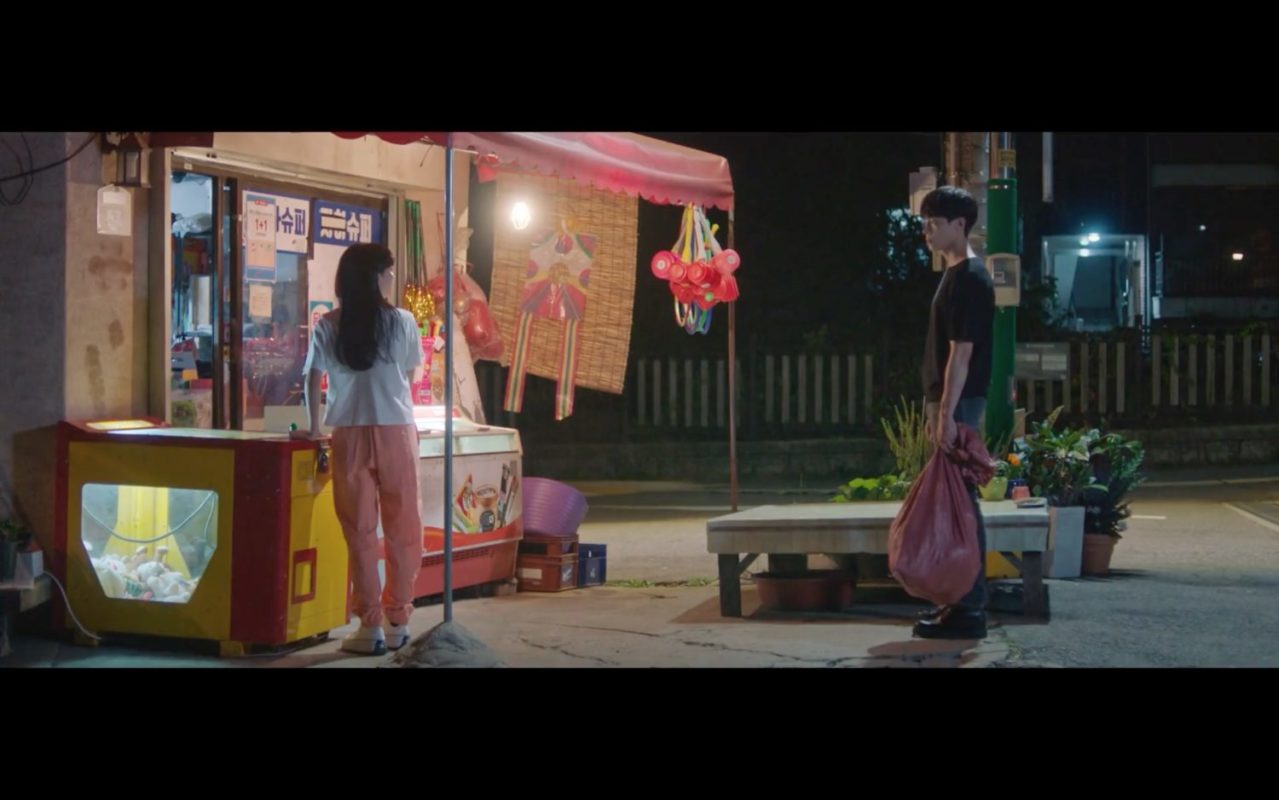 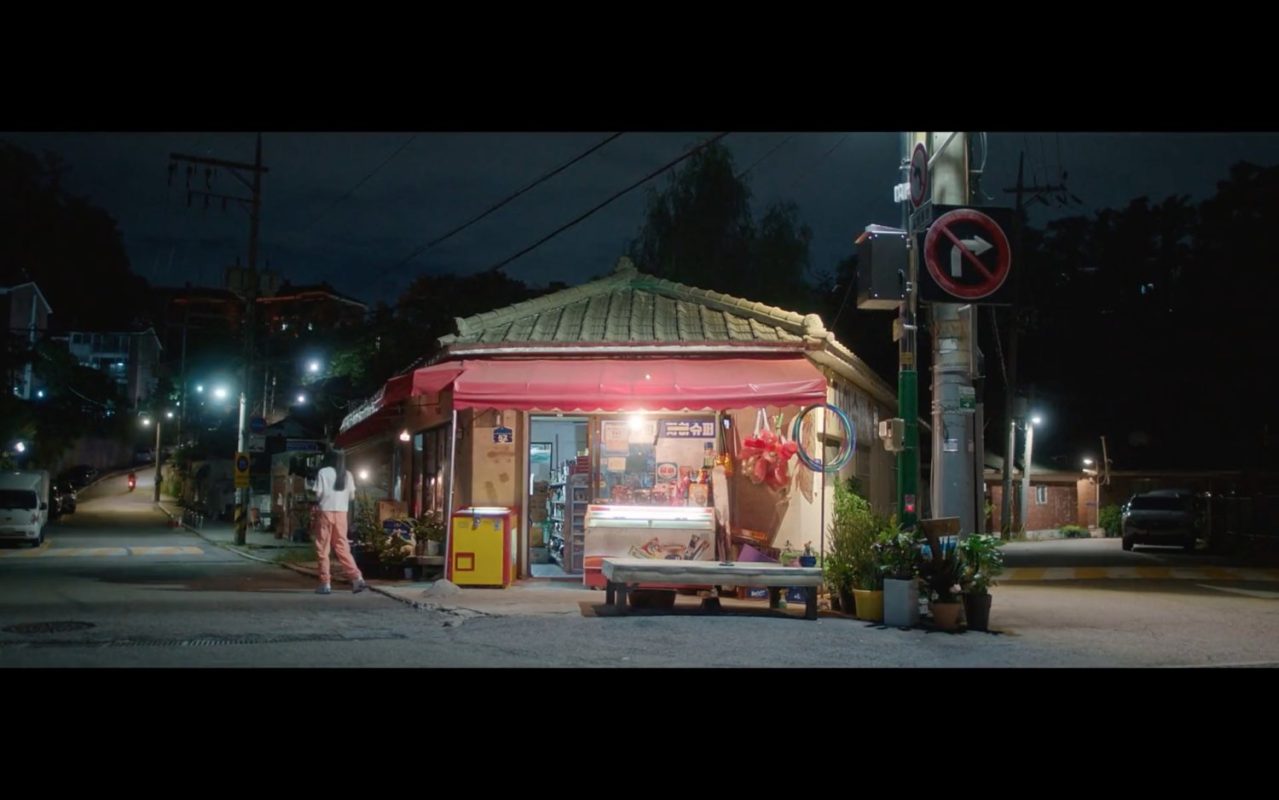 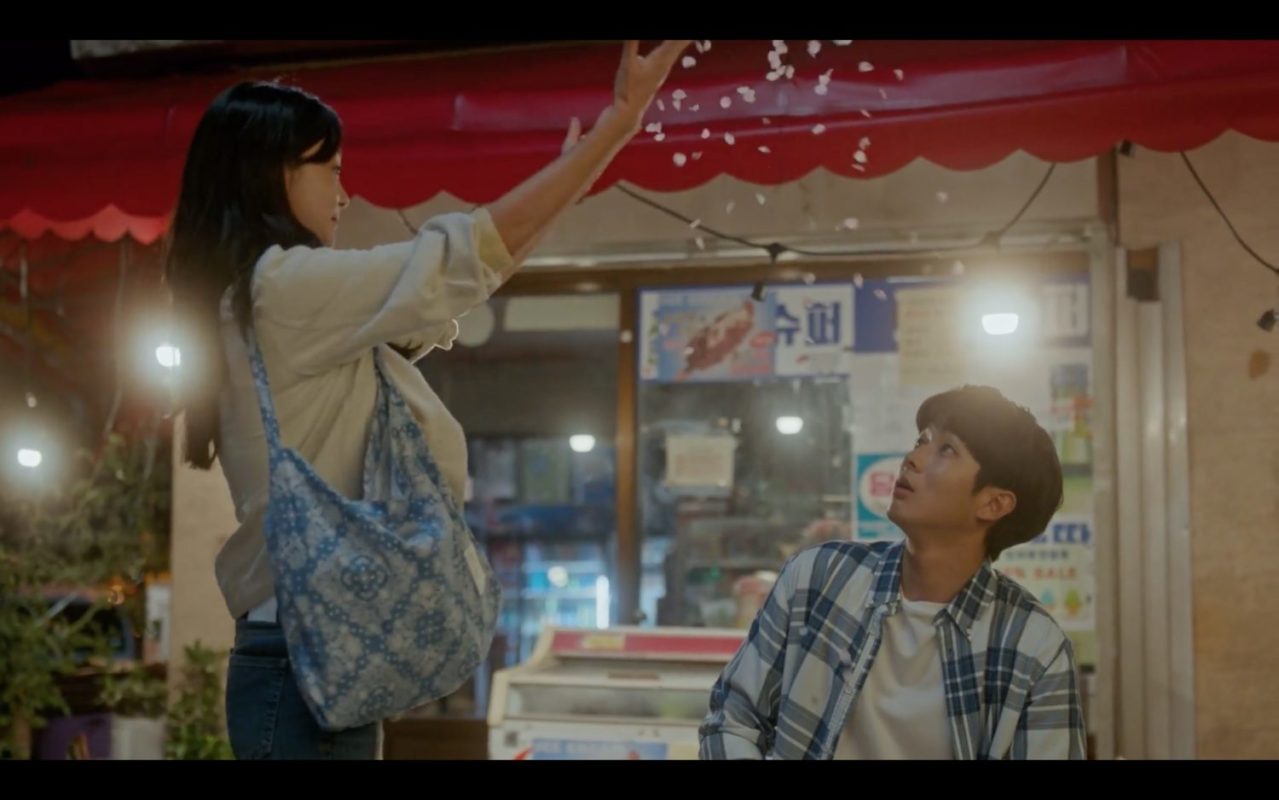 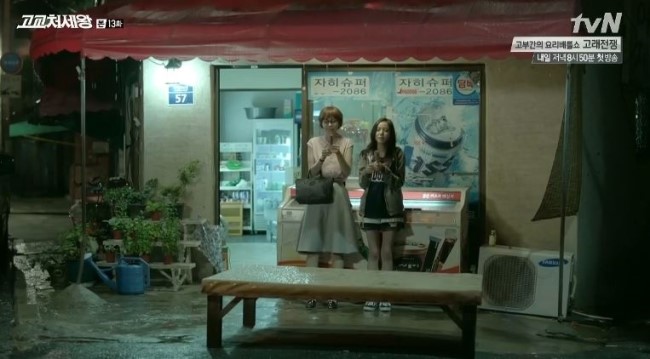 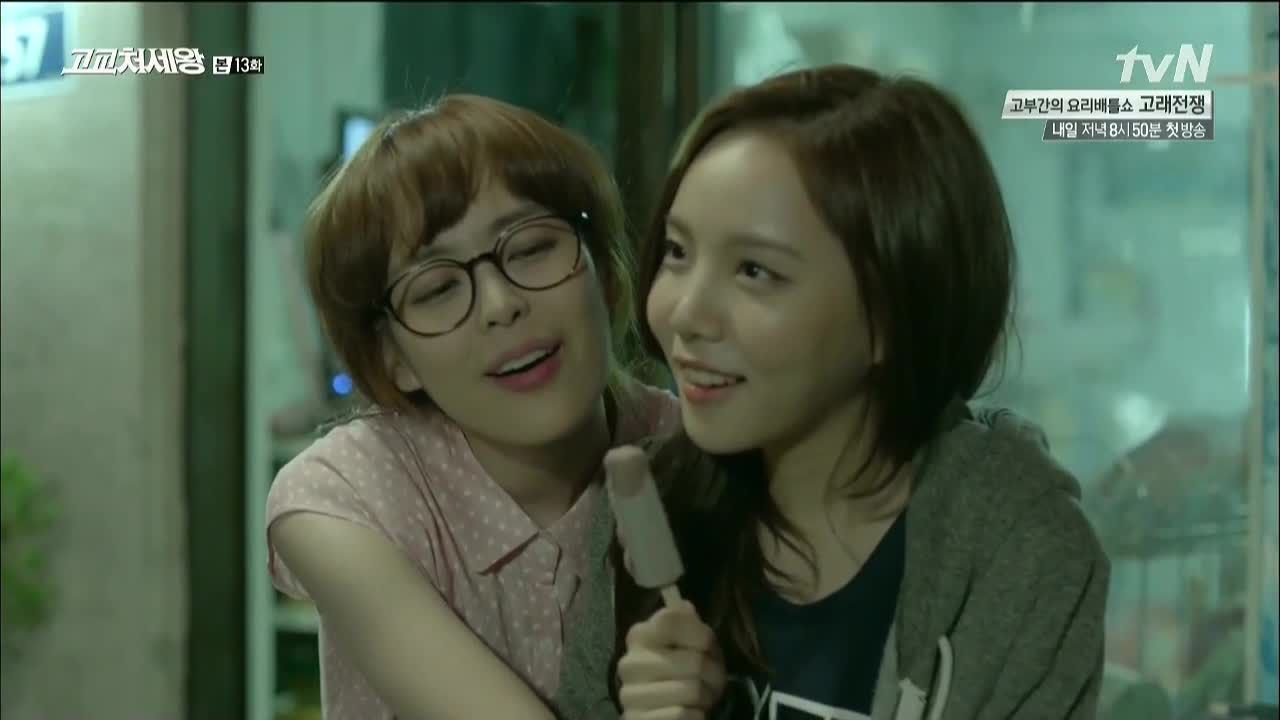 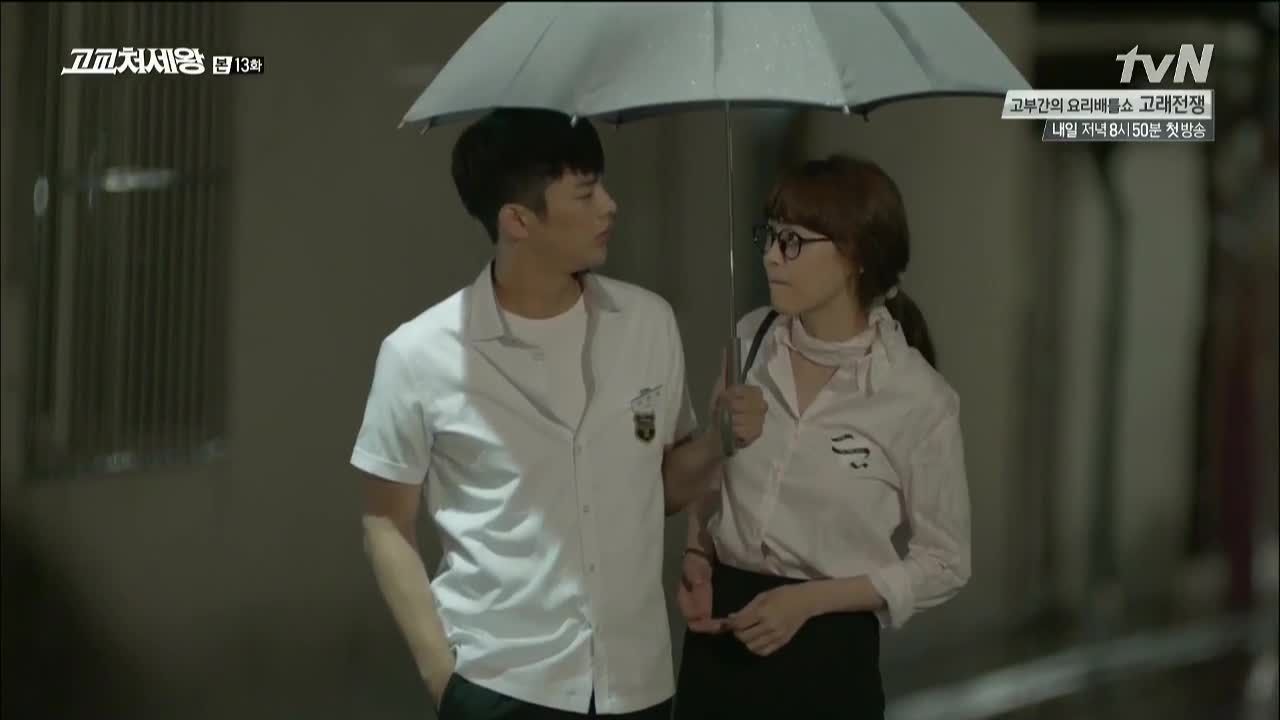 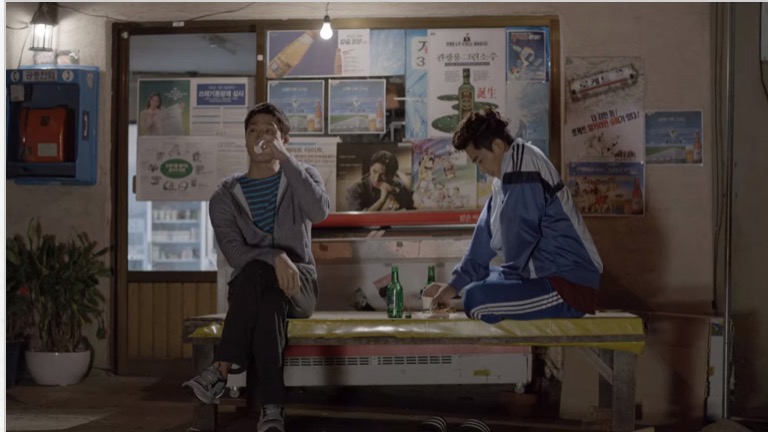 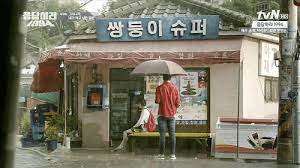 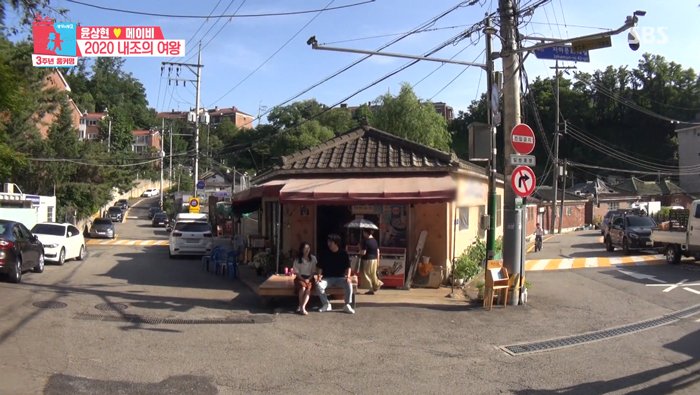 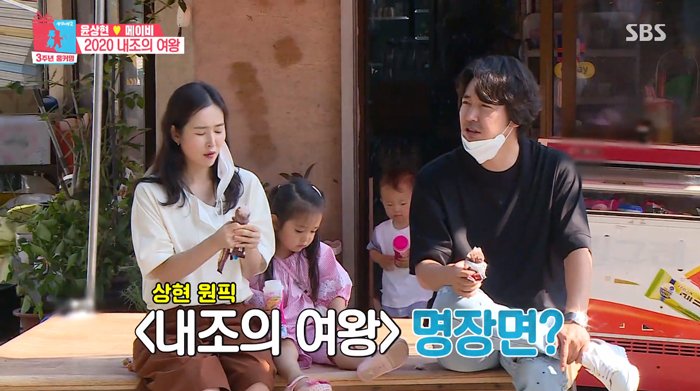 It is in front of this grocery store that Kook Yeon-soo (Kim Da-mi) surprises Choi Woong (Choi Woo-shik) in showering cherry flower petals all over him that she had collected to make up for not going on a trip with him to watch the cherry blossoms when they dated. When Choi Woong remembers in episode 3 of Our Beloved Summer/That Year We (그 해 우리는) (SBS/Netflix, 2021-22) how he sat in awe in the cloud of rose petals, he says: „She showed this side of her only to me. So I couldn’t help but love her.“

A frustrated Jin Ji-won (Cho Yi-hyun) comes to play at the claw machine at night at this minimart in episode 1 of School 2021 (Hakgyo 2021/학교 2021) (KBS2, 2021-22). Just when she starts to kick at the machine because she didn’t win again, her new school mate Jung Young-joo (Choo Yeong-woo) stops by with his motorcycle to fill up the machine. When he has left, Ji-won finds a teddy sitting on the machine.

This appears as ‘Eunha Super’, the minimart that Cha Ji-won’s (Moon Chae-won) mother runs in Flower of Evil (악의 꽃) (tvN, 2020) — as seen in episode 2, when Ji-won meets Baek Hee-sung (Lee Joon-gi) for the first time in the summer of 2006 while manning the store.

Yoon Ji-soo (Lee Bo-young) comes to this mart in episode 1 of When My Love Blooms/The Most Beautiful Moment in Life (화양연화 – 삶이 꽃이 되는 순간) (tvN, 2020) to buy bottles of water to distribute at a protest, saying that she hates going to supermarkets because she was fired from one. In episode 2, Han Jae-hyun (Yoo Ji-tae) waits for her here — seen as ‘Crossing Super’ (삼거리 슈퍼)— in his car.

This appears as ‘Jaeha Super’ in episode 1 of Unasked Family (꽃길만 걸어요) (KBS2, 2019-20) along the road that Kang Yeo-won (Choi Yoon-so) brings her daughter and nephew to, in order to be picked up by the kindergarten bus.

After having had some spicy chicken together, the two sisters, Jung Soo-young (Lee Ha-na) and Jung Yoo-ah (Lee Yul-eum) get some ice cream at this market in episode 13 of High School King/High School King of Savvy/King of High School (고교처세왕) (tvN, 2014) and eat it while waiting for the rain to cease. Later in the episode Lee Min-suk (Seo In-guk) and Soo-young pass by here when he walks her back home at night.

When actor Yoon Sang-hyun visited the shop in 2020 — having filmed Queen of the Housewives here in 2009 — he recognized the owner behind the counter, who was also present during the drama filming. In an interview with the blog ‘Spring Day in Namhae’ (남해의봄날), the owner explained that she had taken over this mini-mart from her father who had “run [it] for a long time”. Though “[t]he number of items and store spaces has decreased a lot compared to before, there are still people coming, so I open the door each day and wait for customers,” she continued.

The mini-mart, which has existed at least since the 1970s, will apparently soon disappear as it “is included in the redevelopment area” according to Spring Day in Namhae.

Jaha Super is also one of the markets drawn by Lee Me-kyeoung/Lee Mekyeoung (이미경/李美京) in 2018 for her series A small store (구멍가게), which we mentioned in one of our Saturday Summaries. It also appears in her most recent book Small Stores, Opened Today (구멍가게, 오늘도 문 열었습니다 )(2020). Photos of this market from 2009 can be seen on this blog.