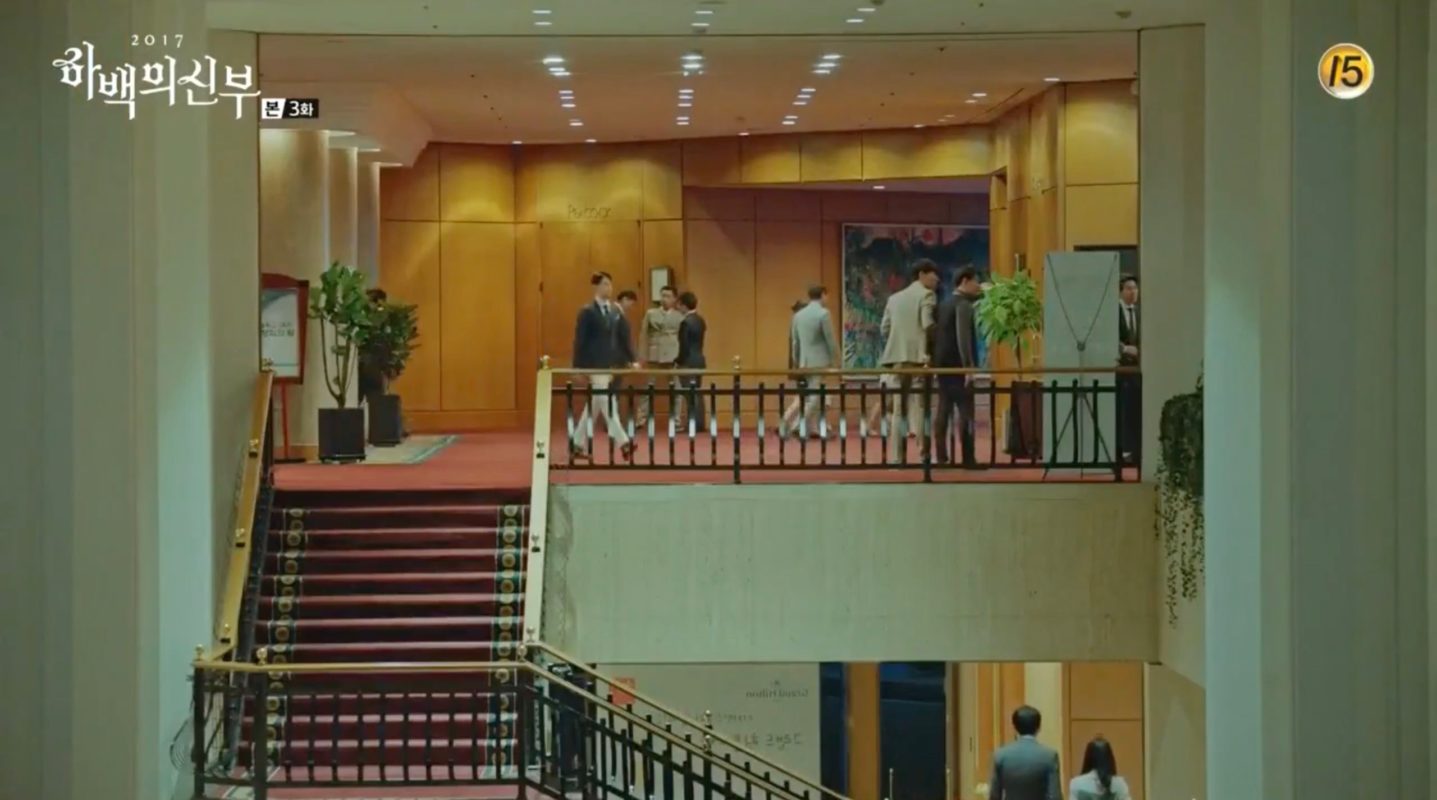 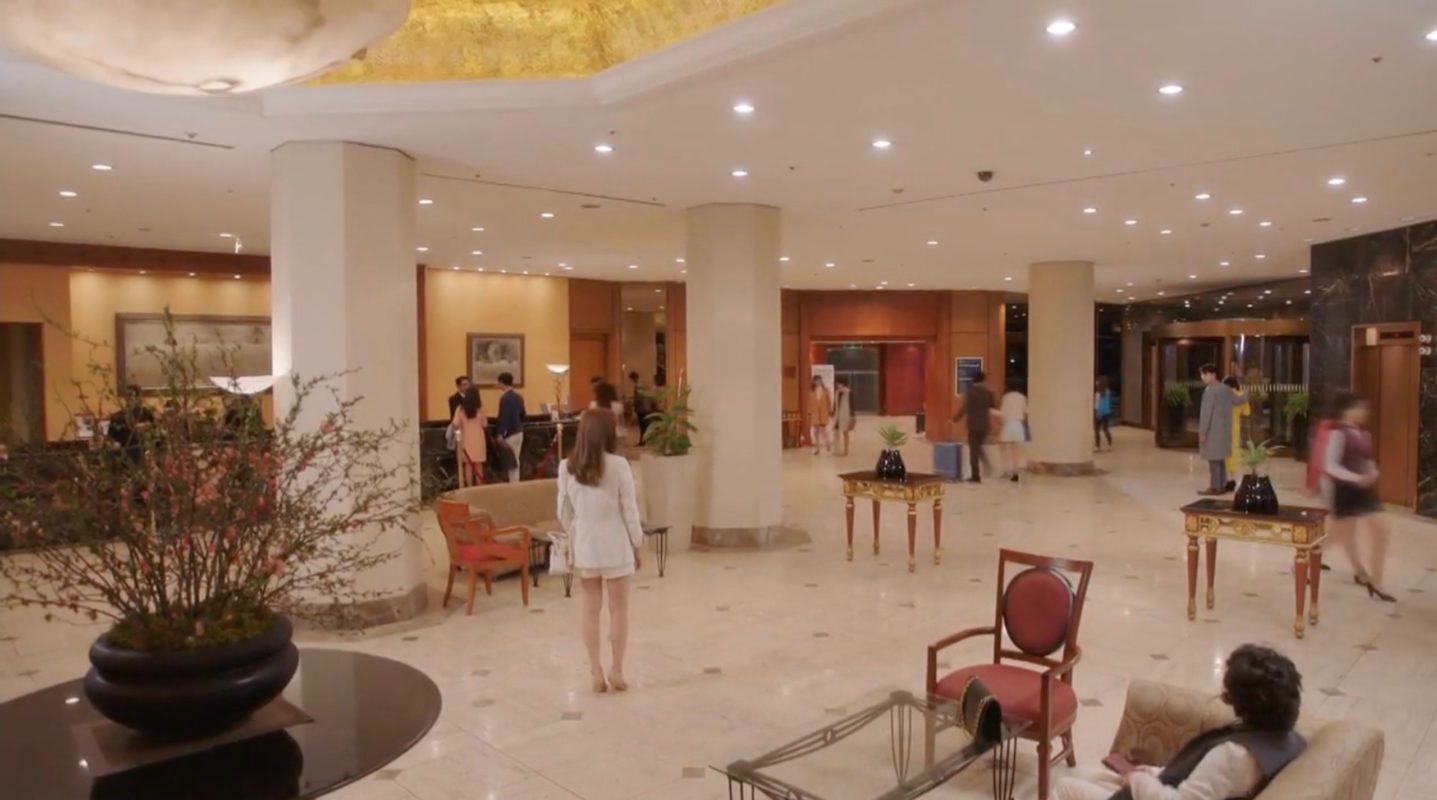 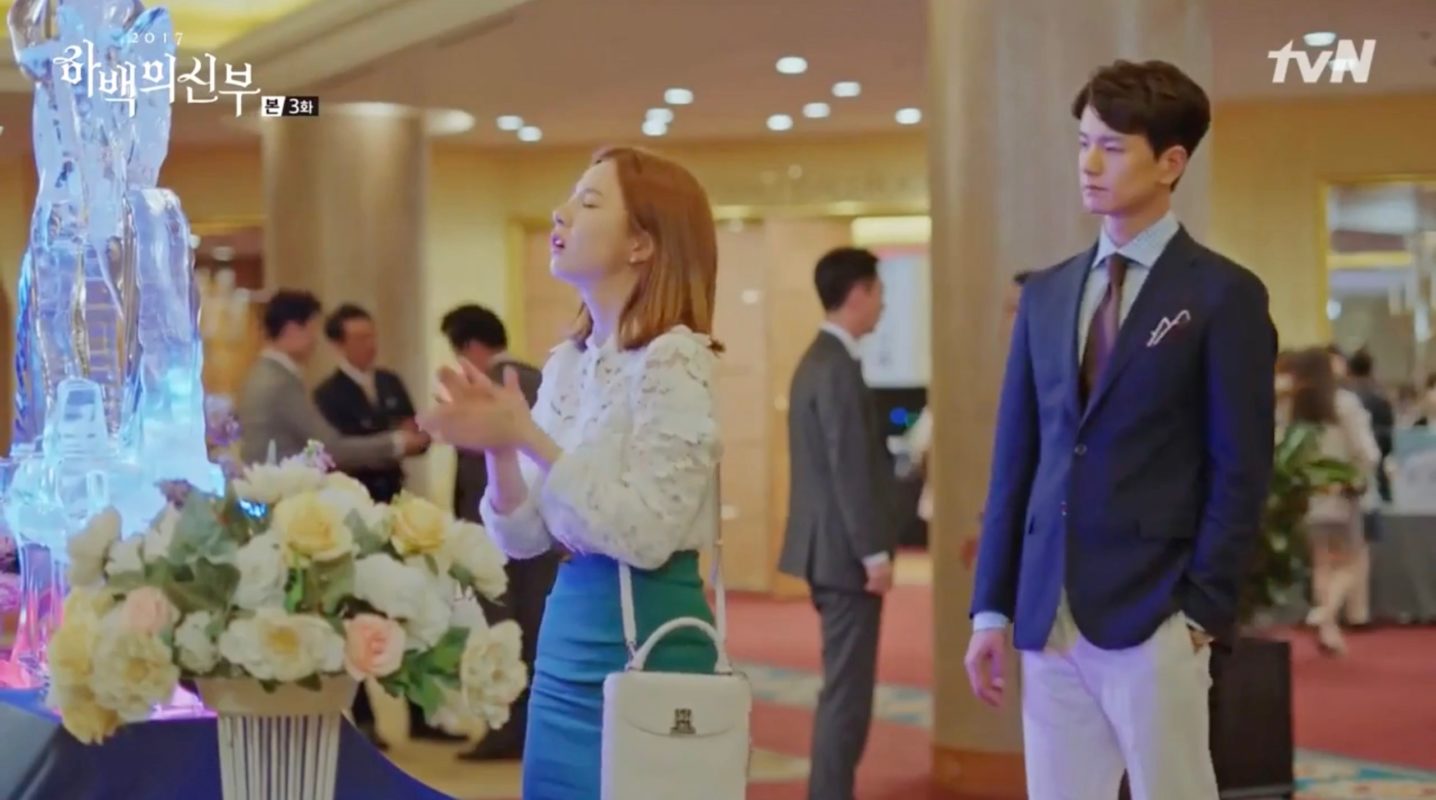 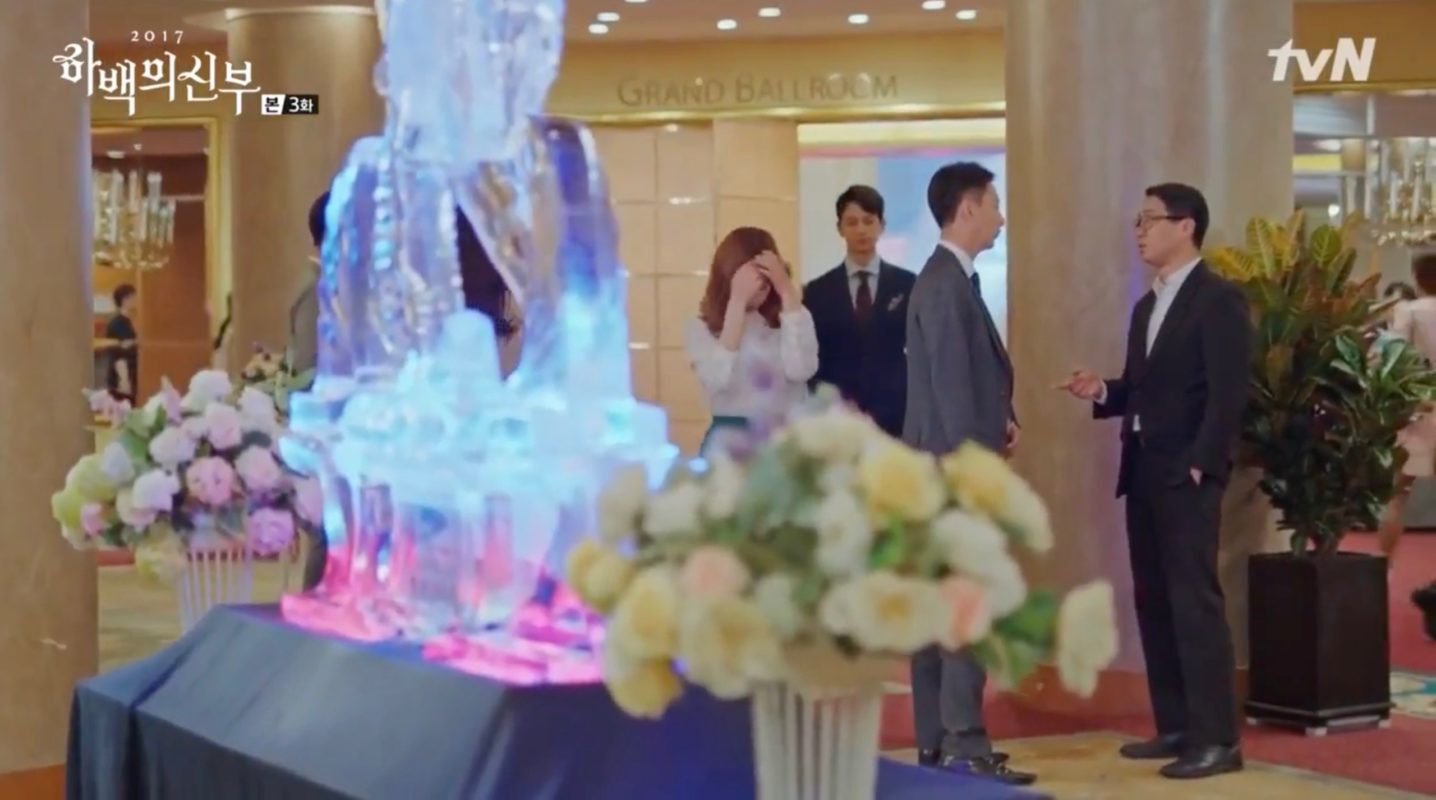 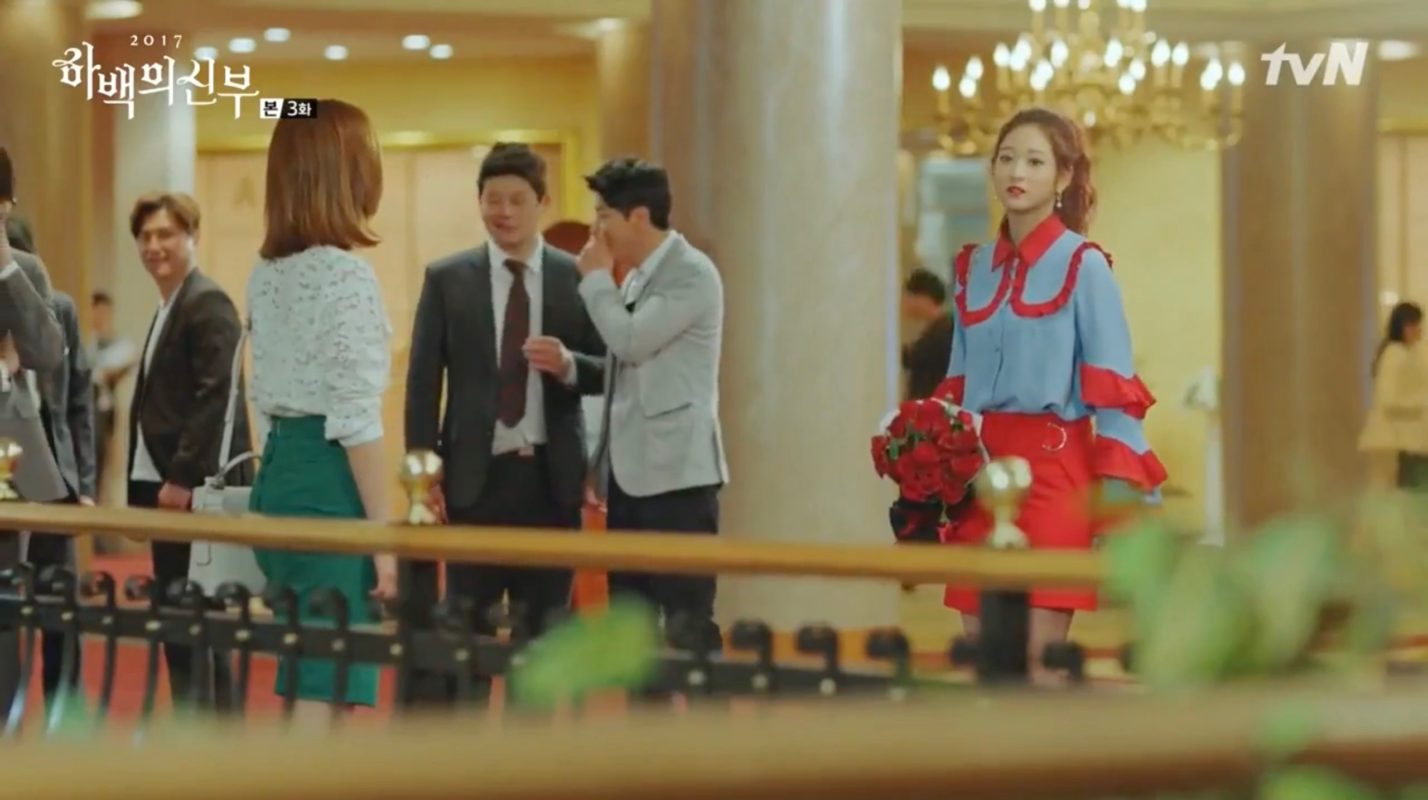 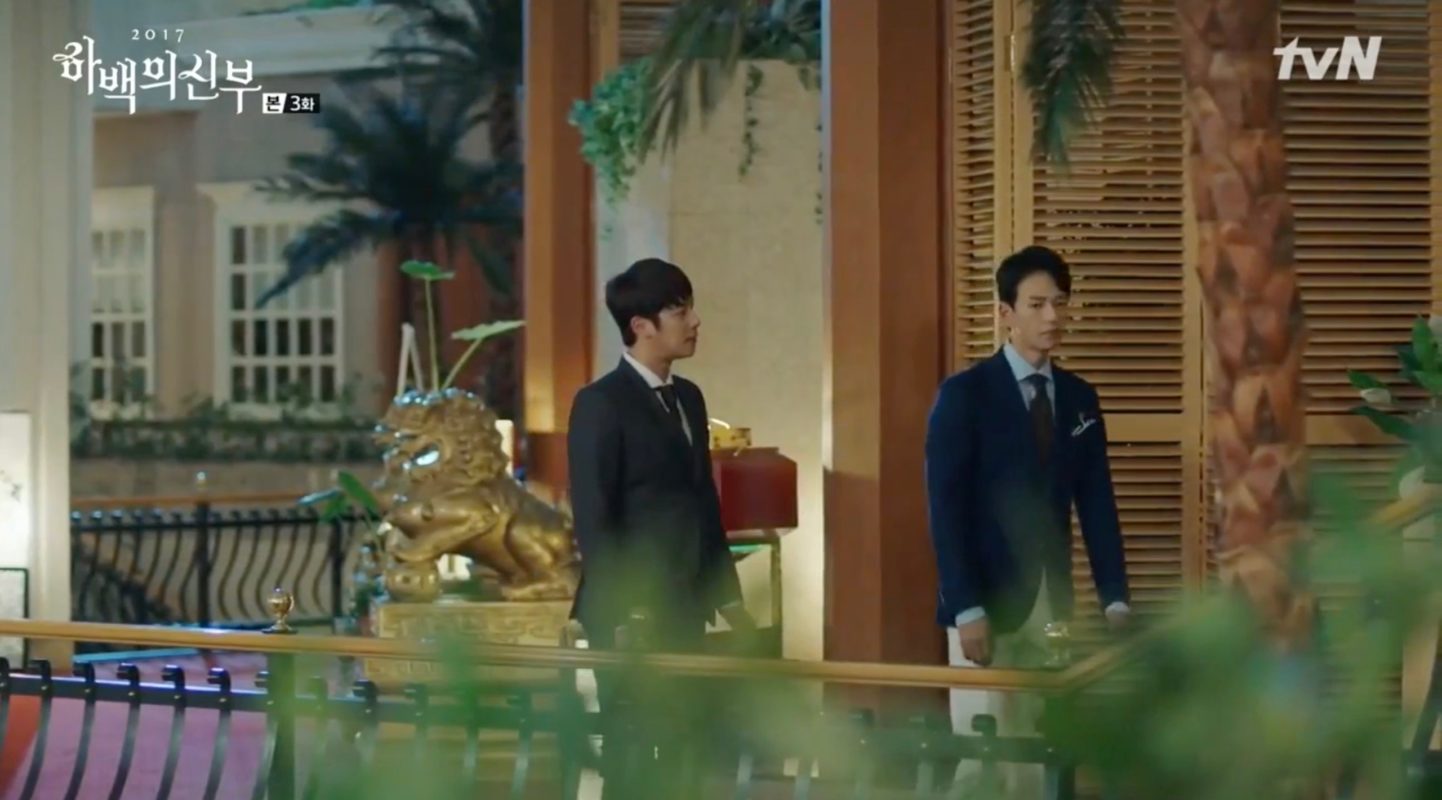 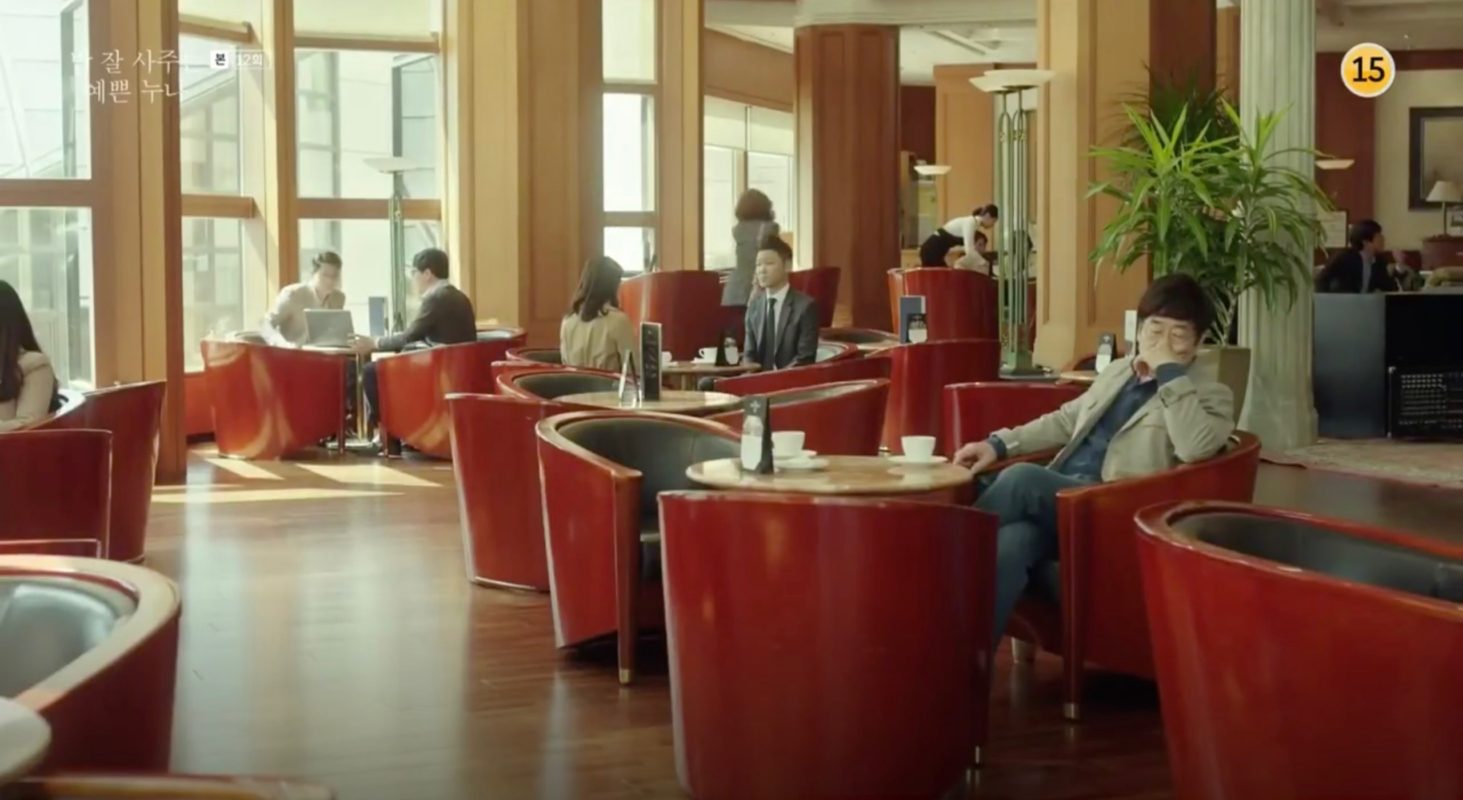 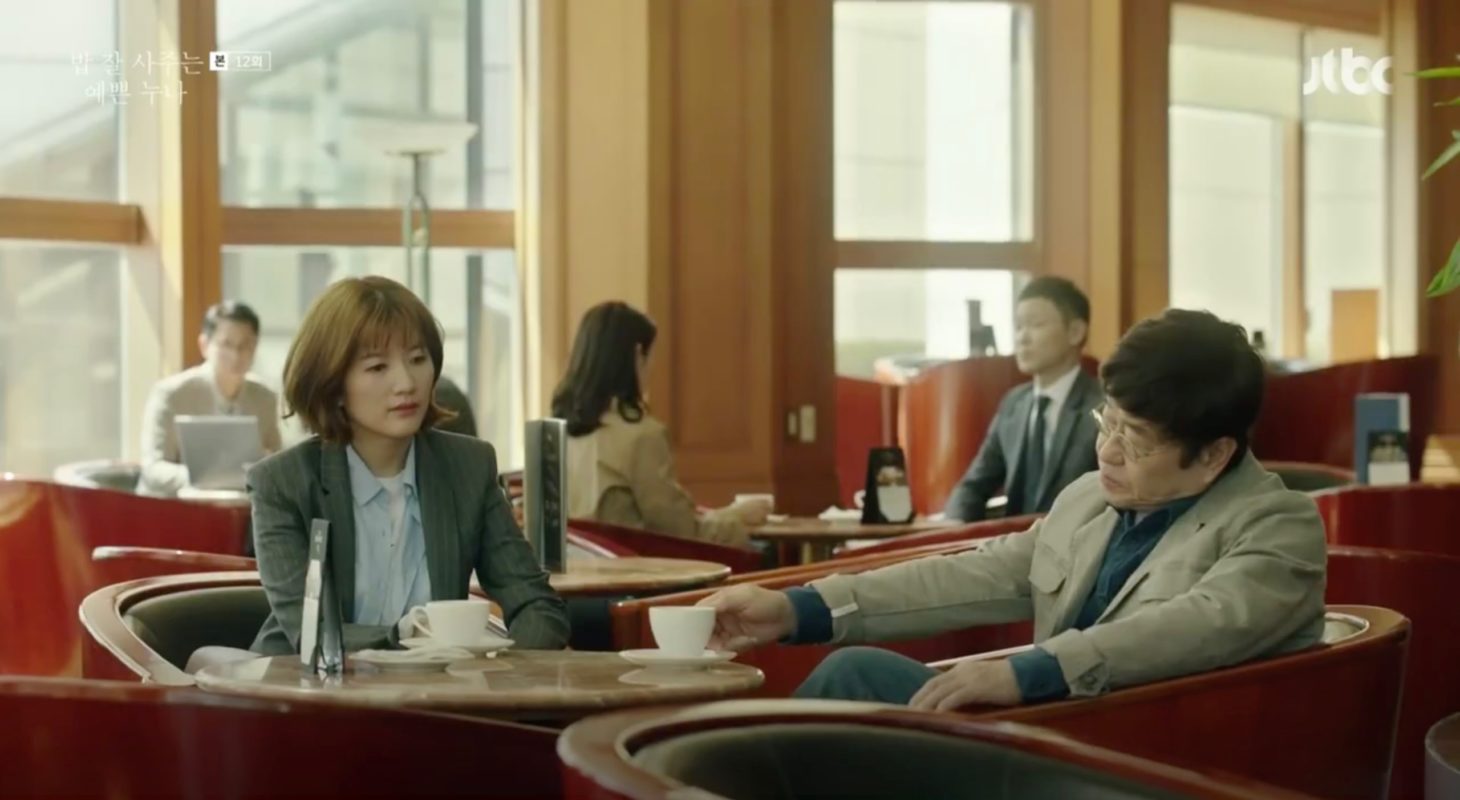 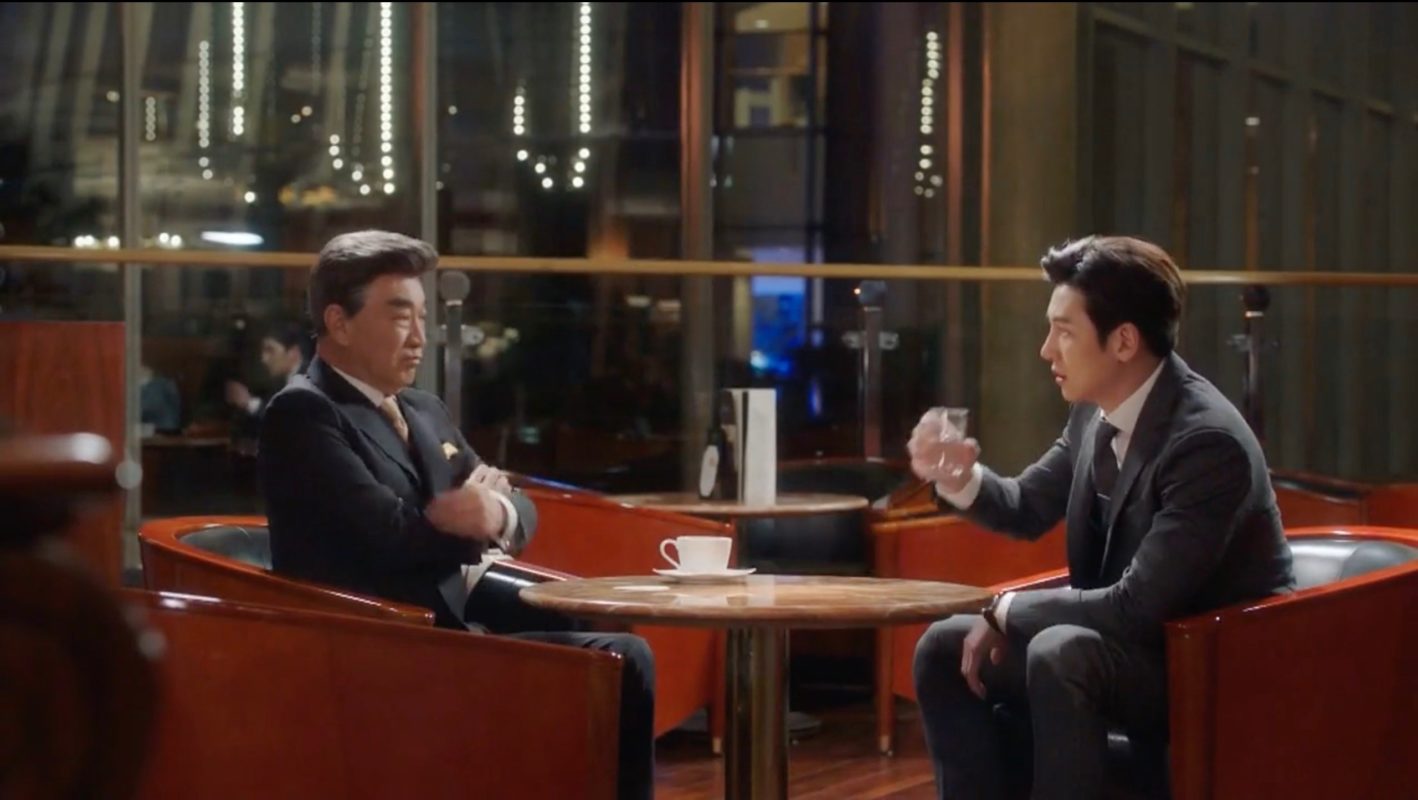 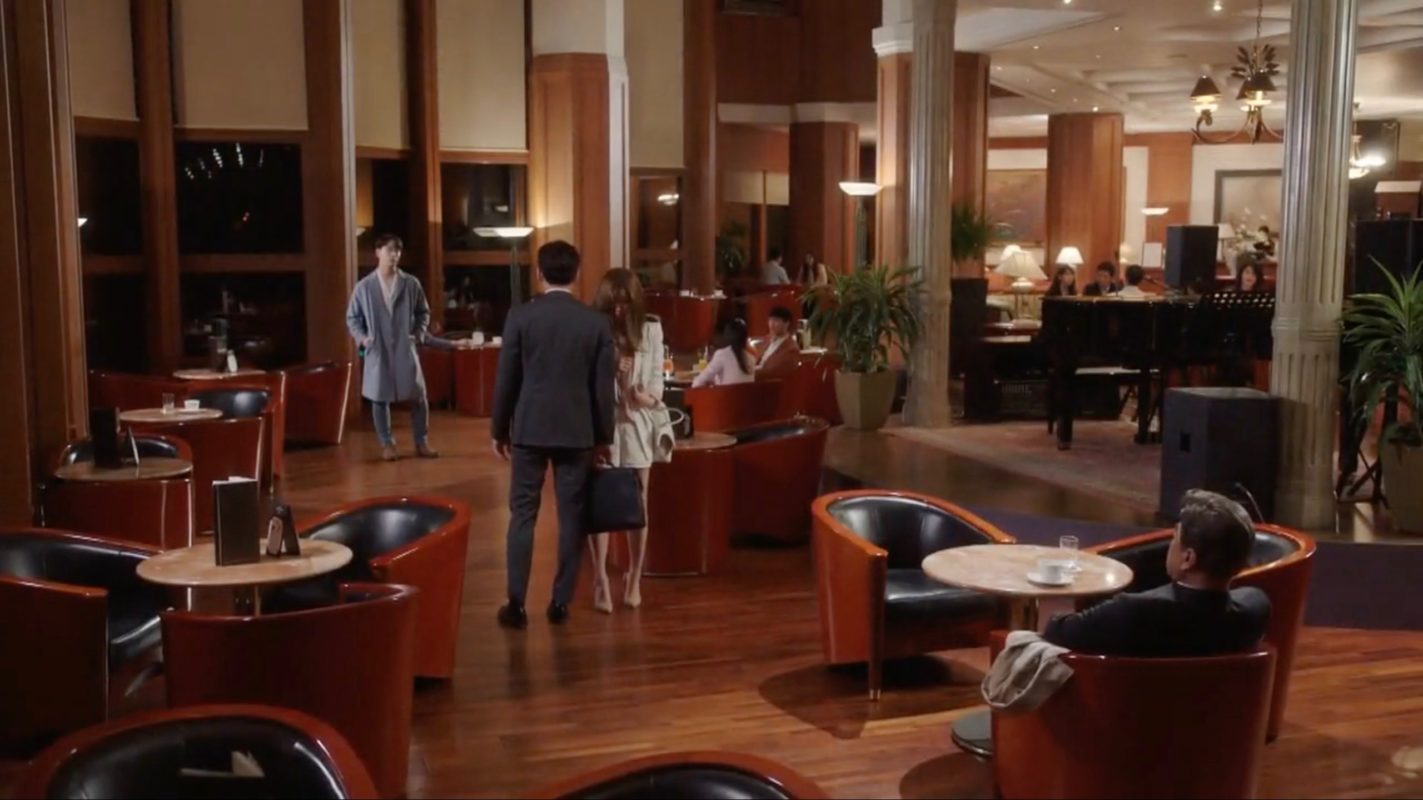 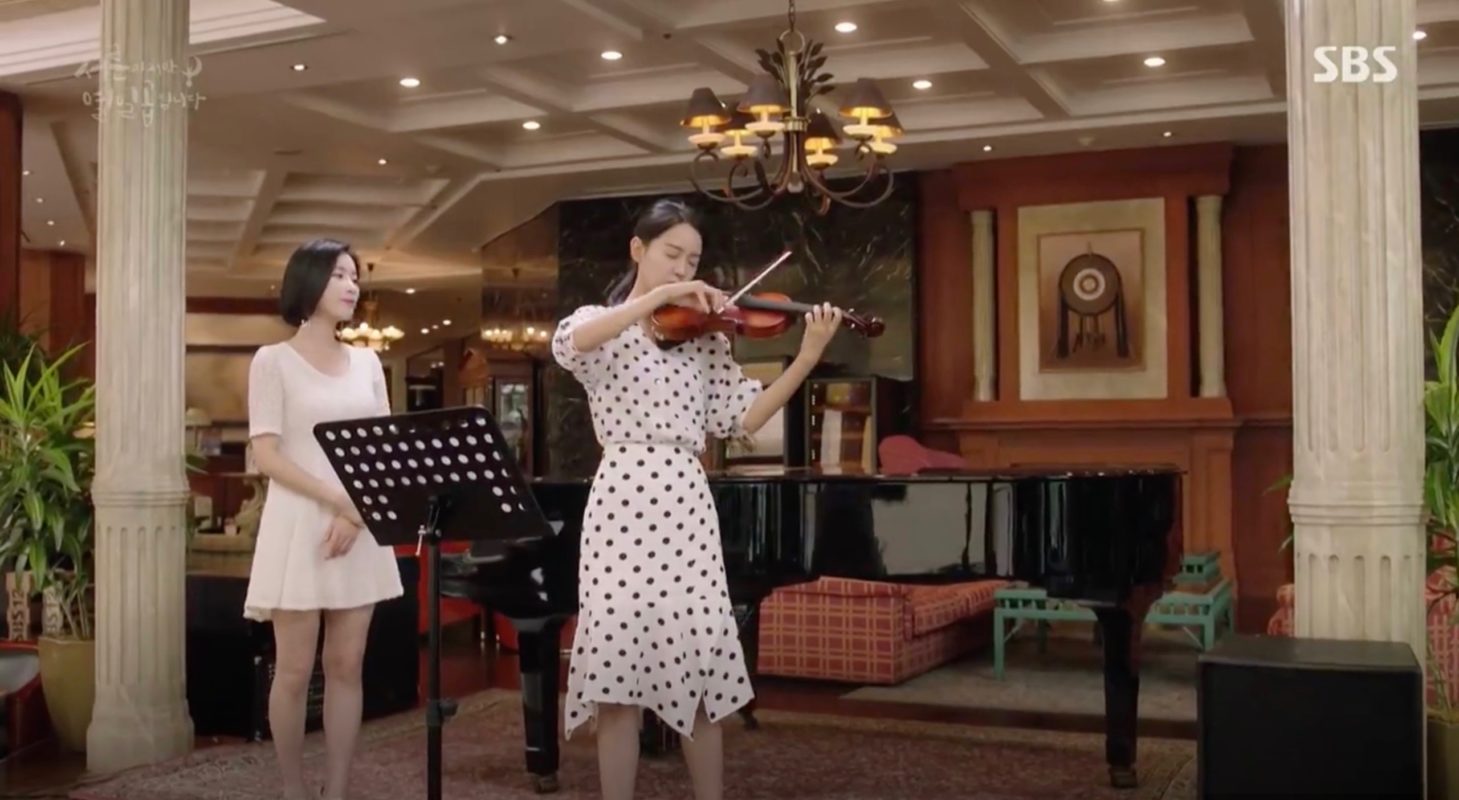 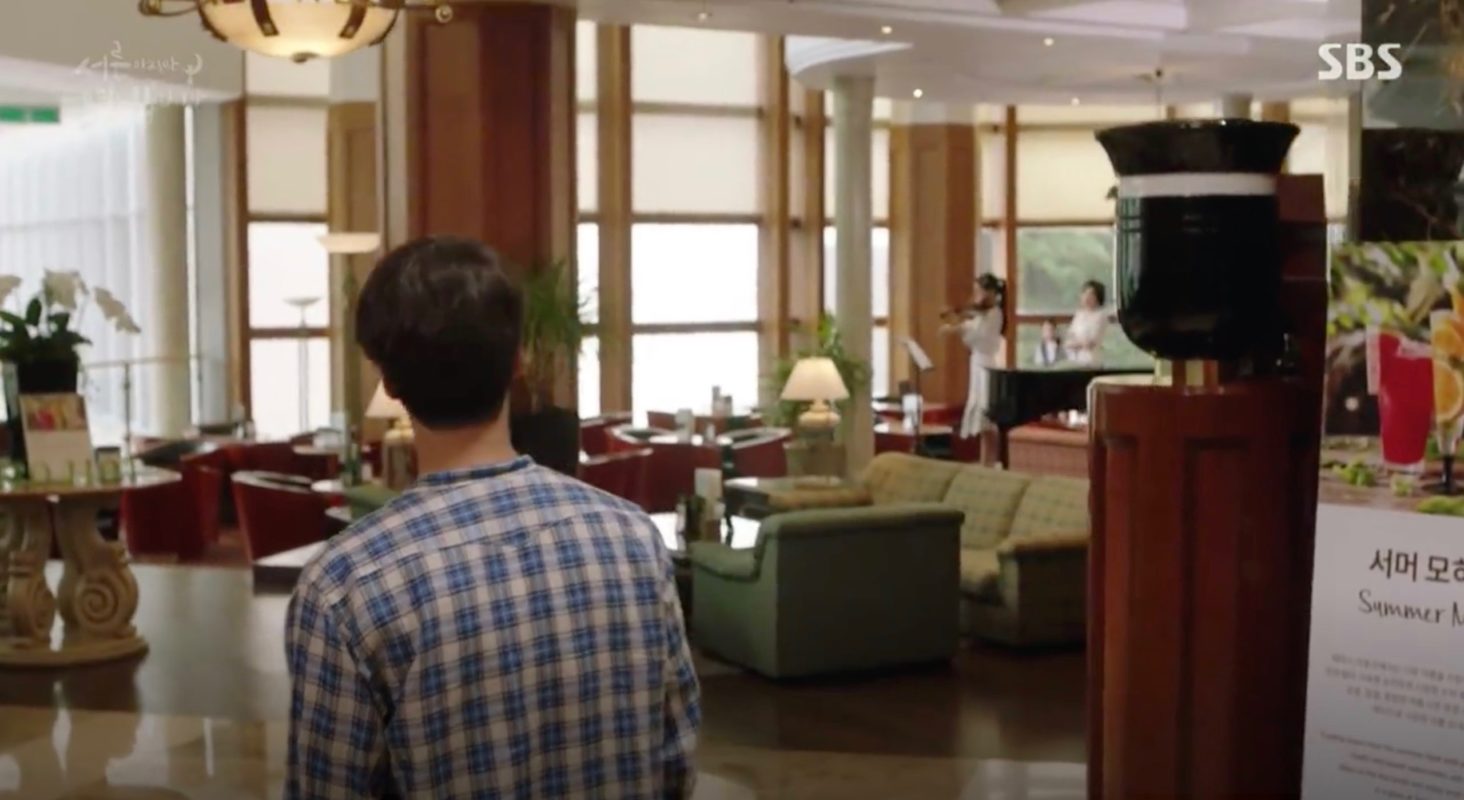 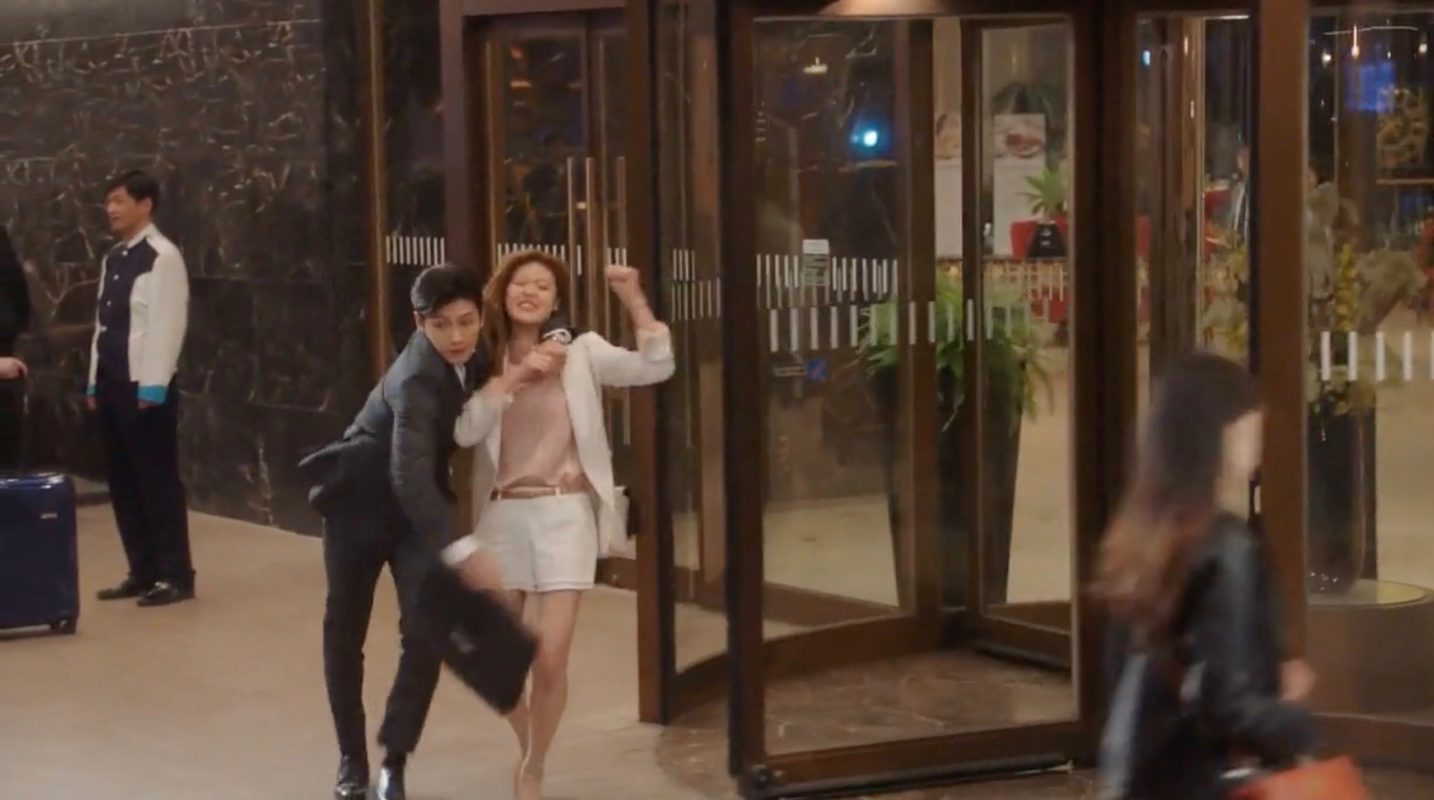 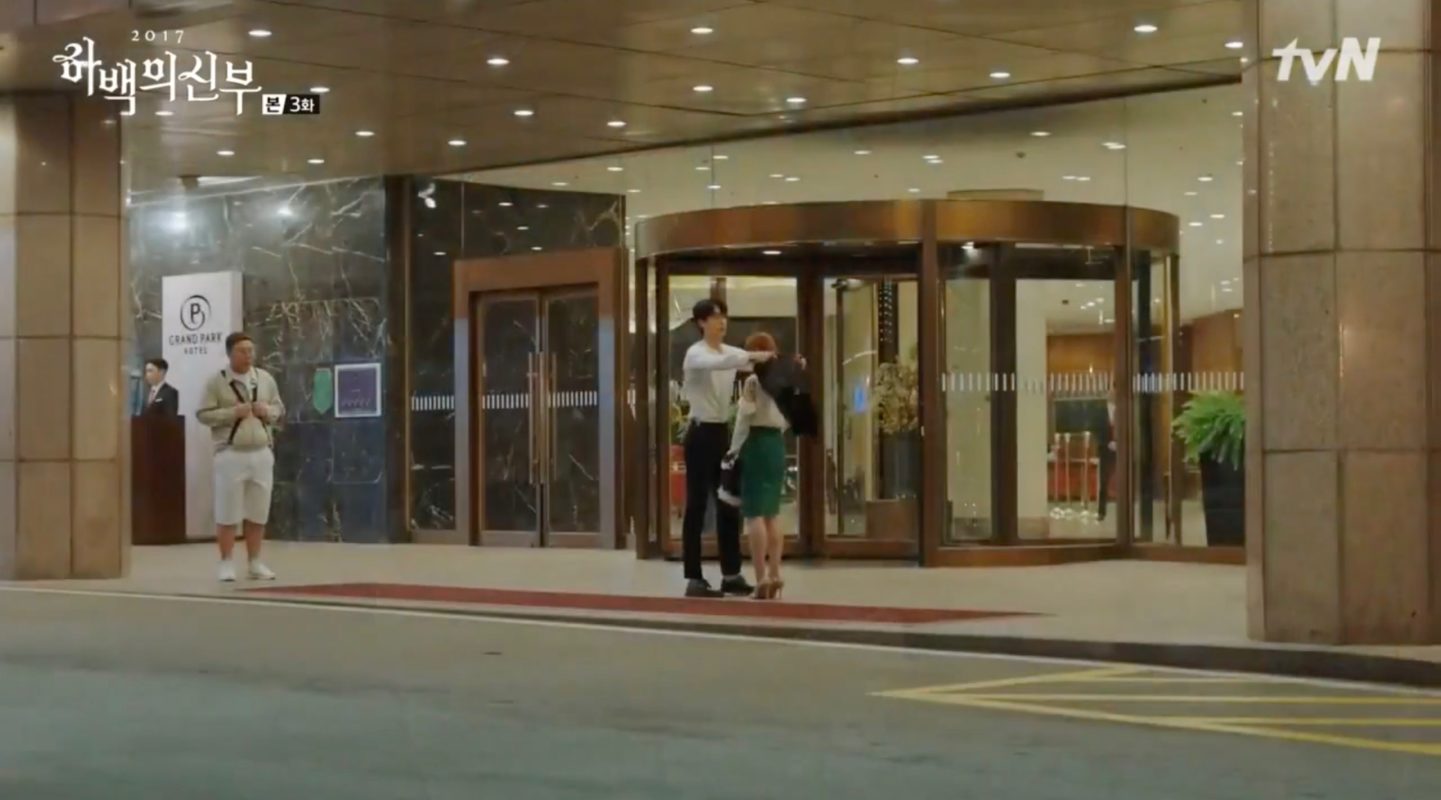 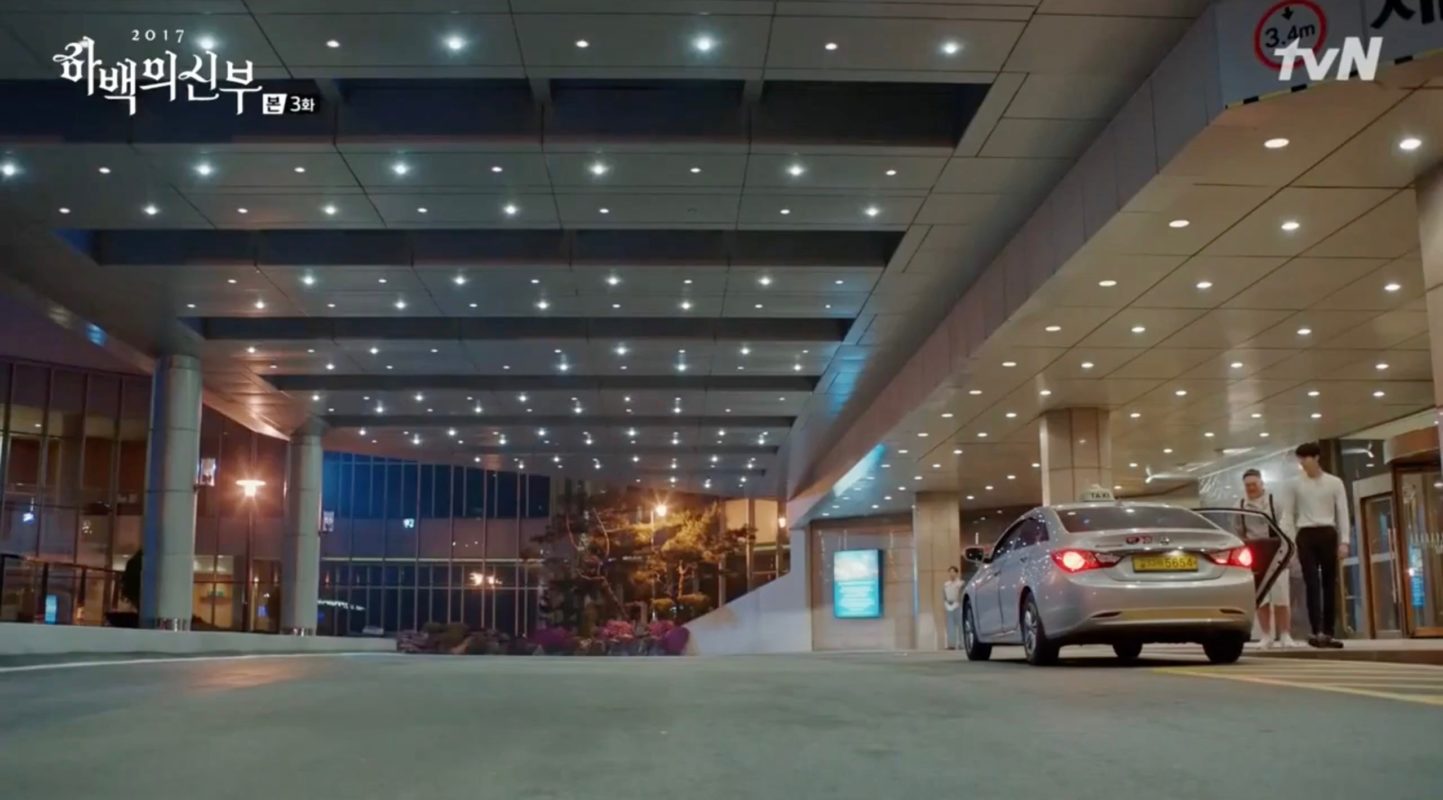 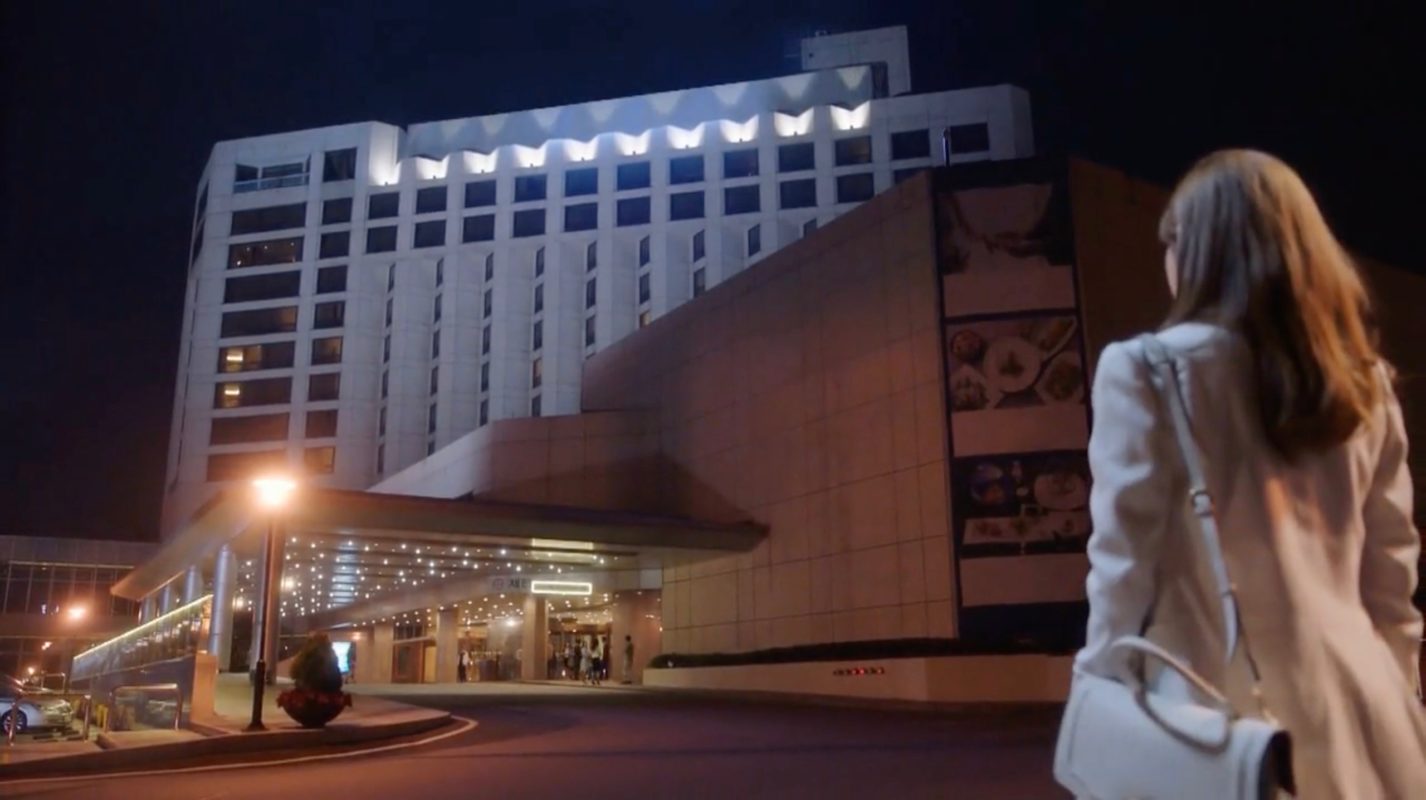 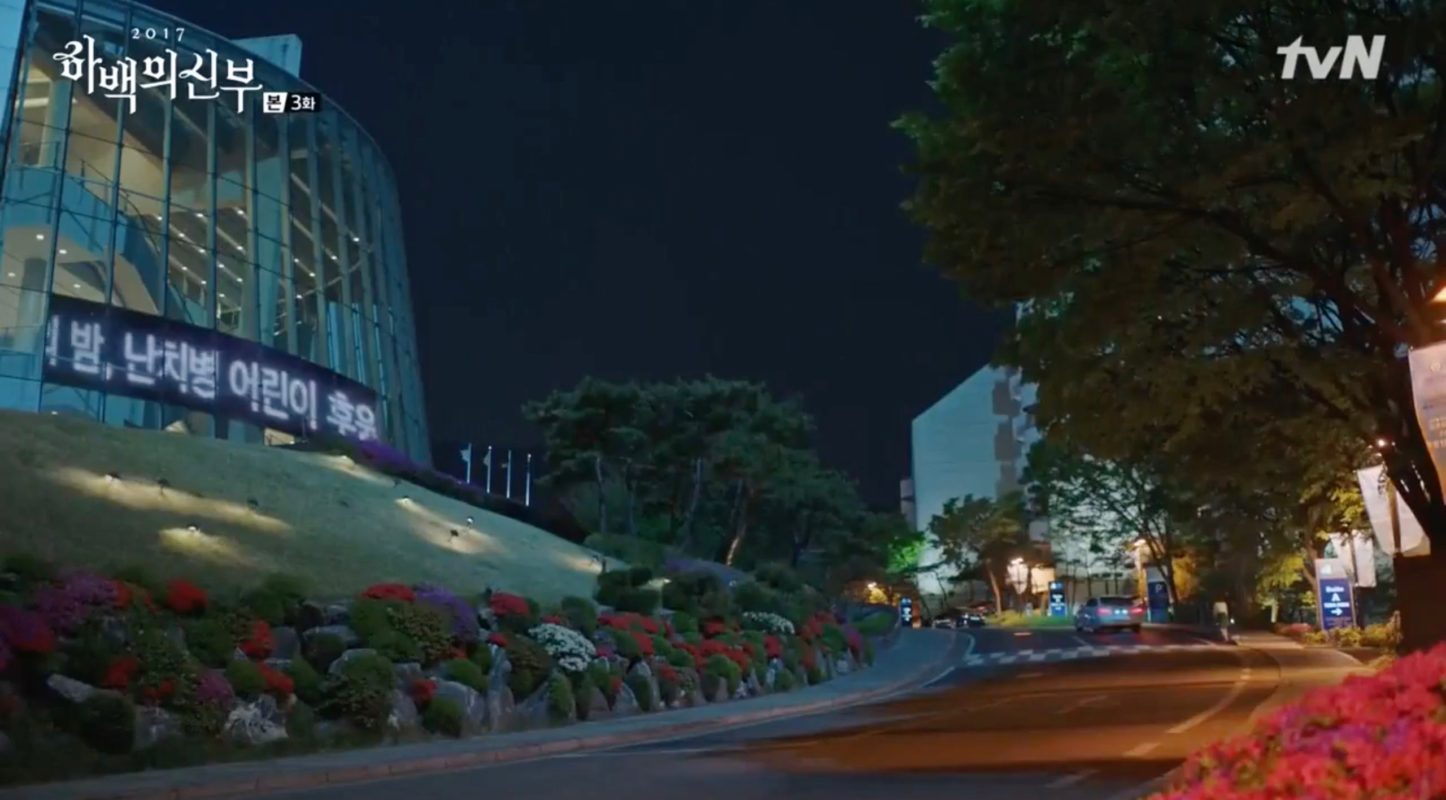 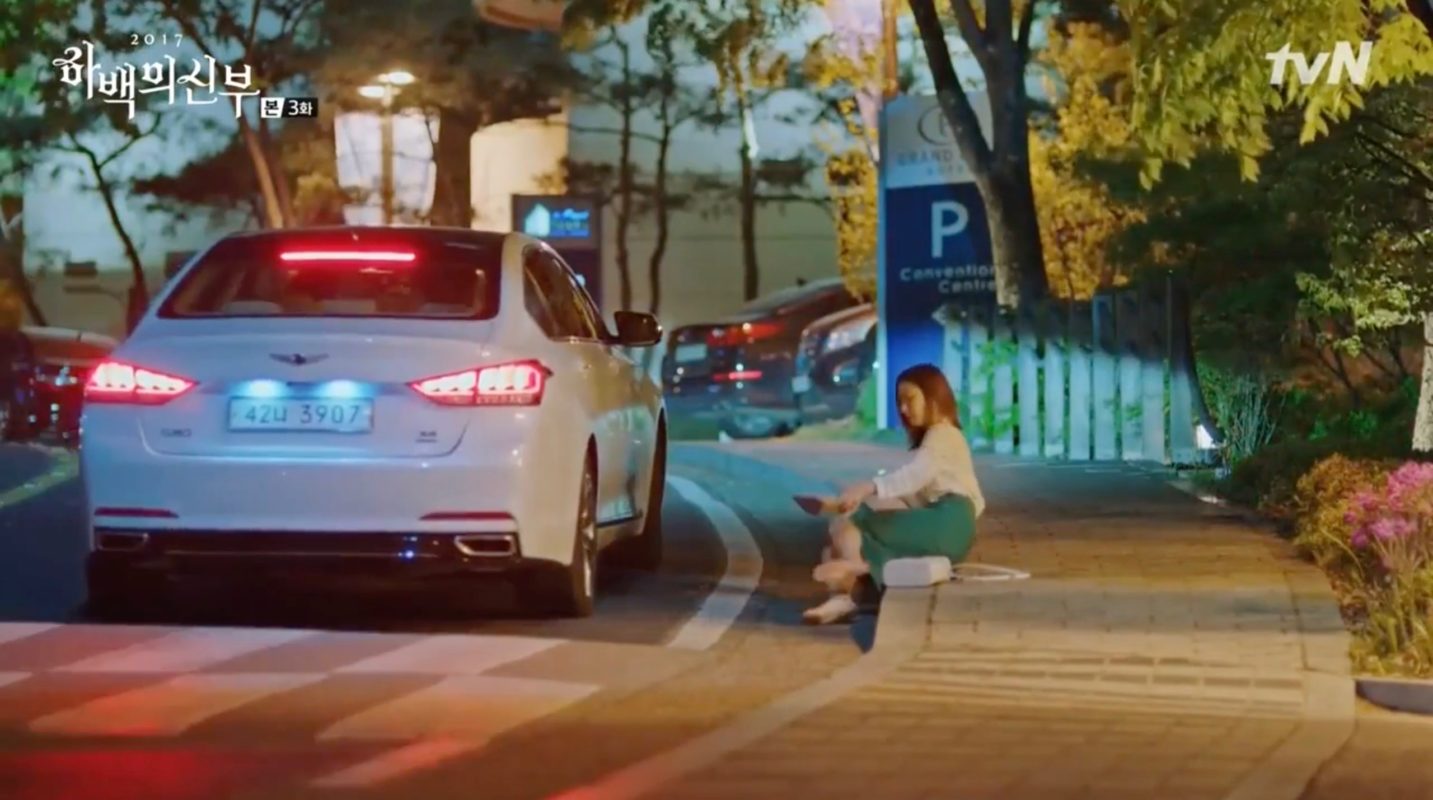 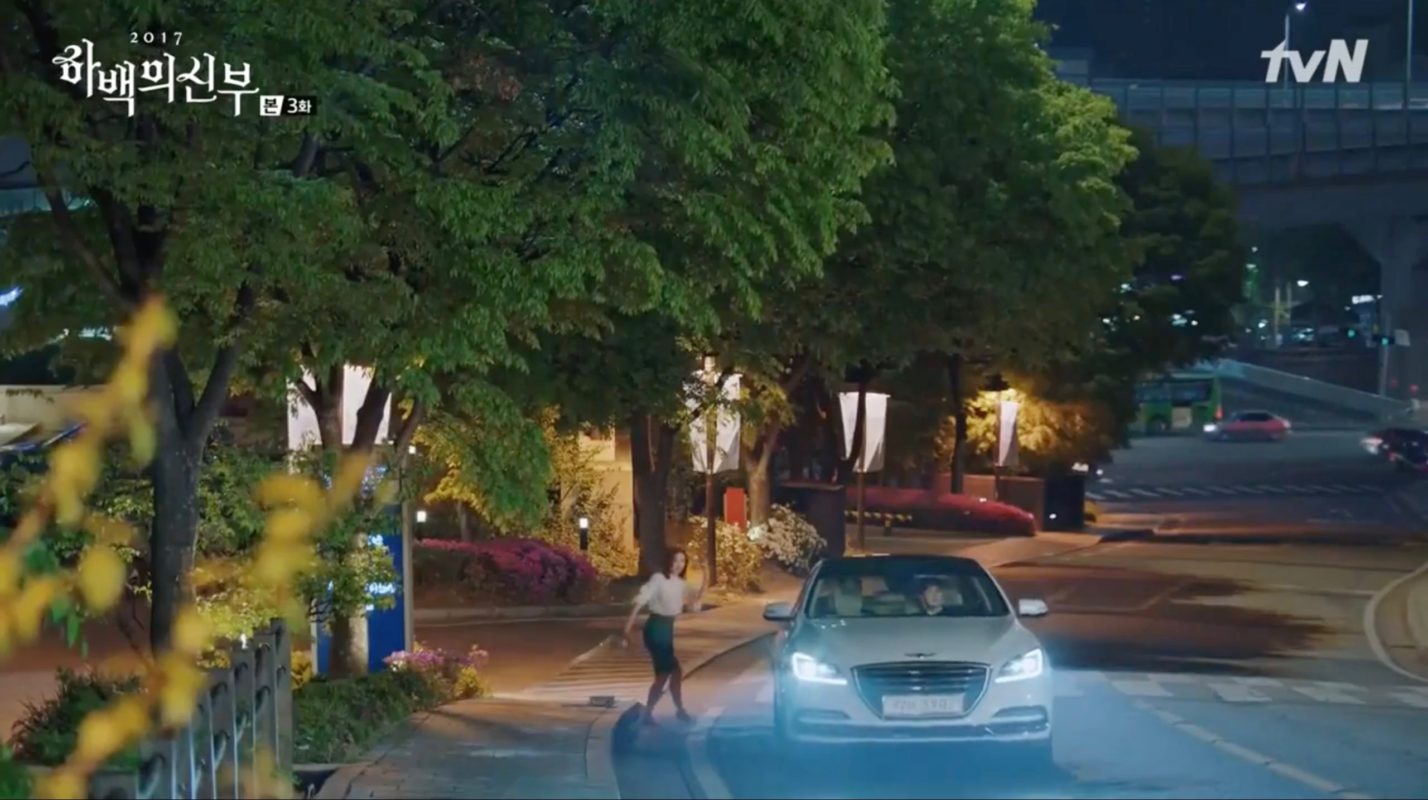 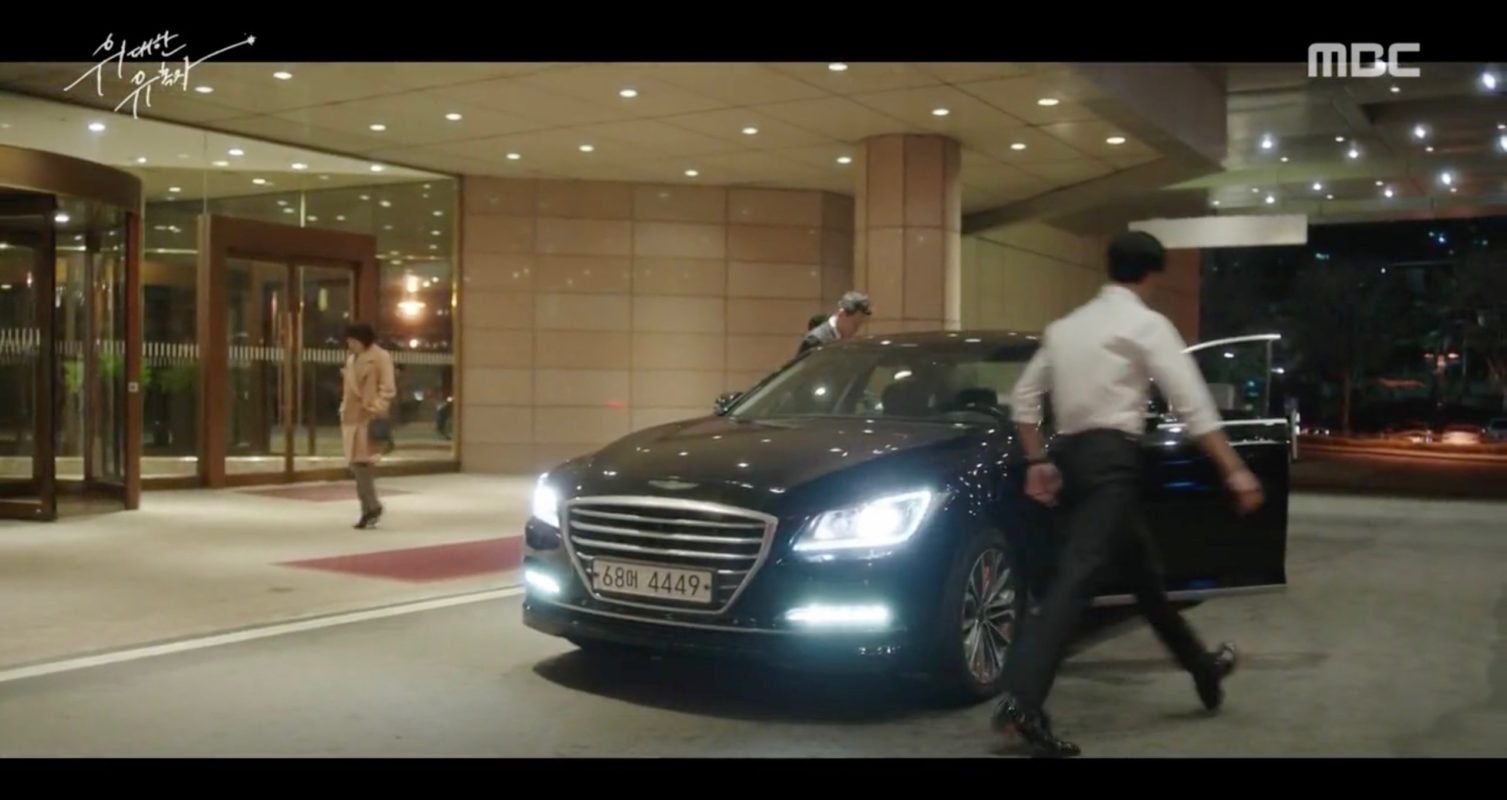 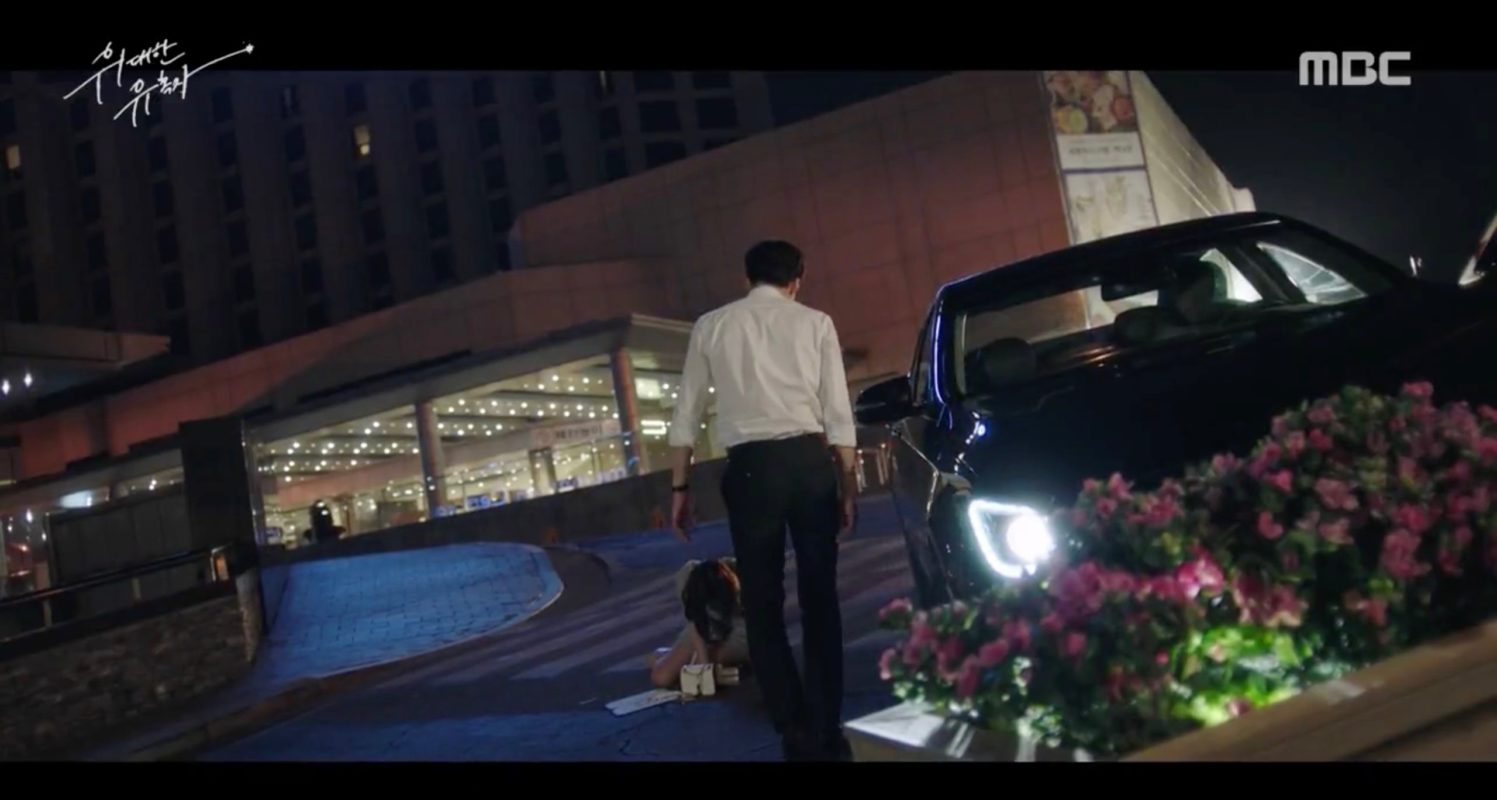 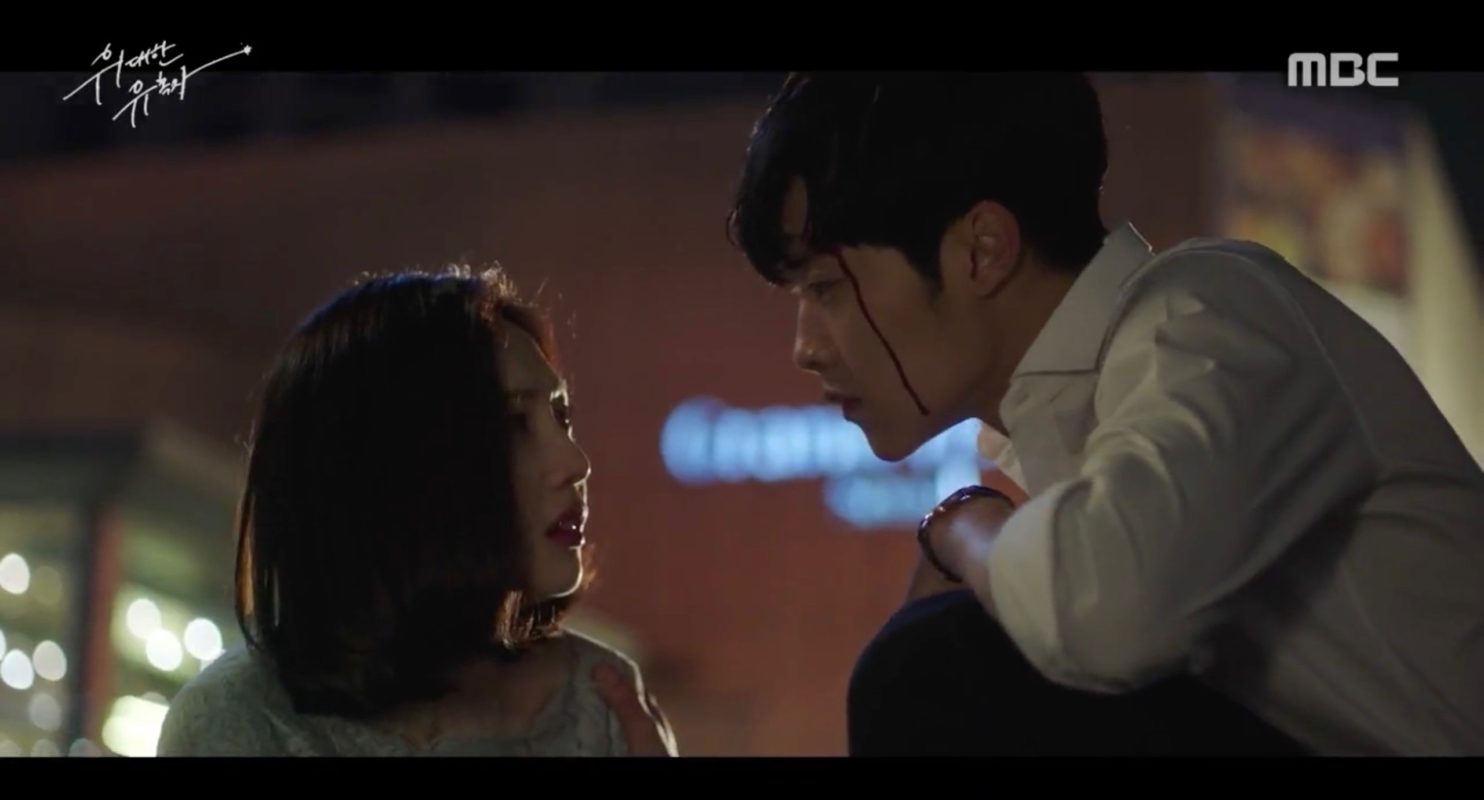 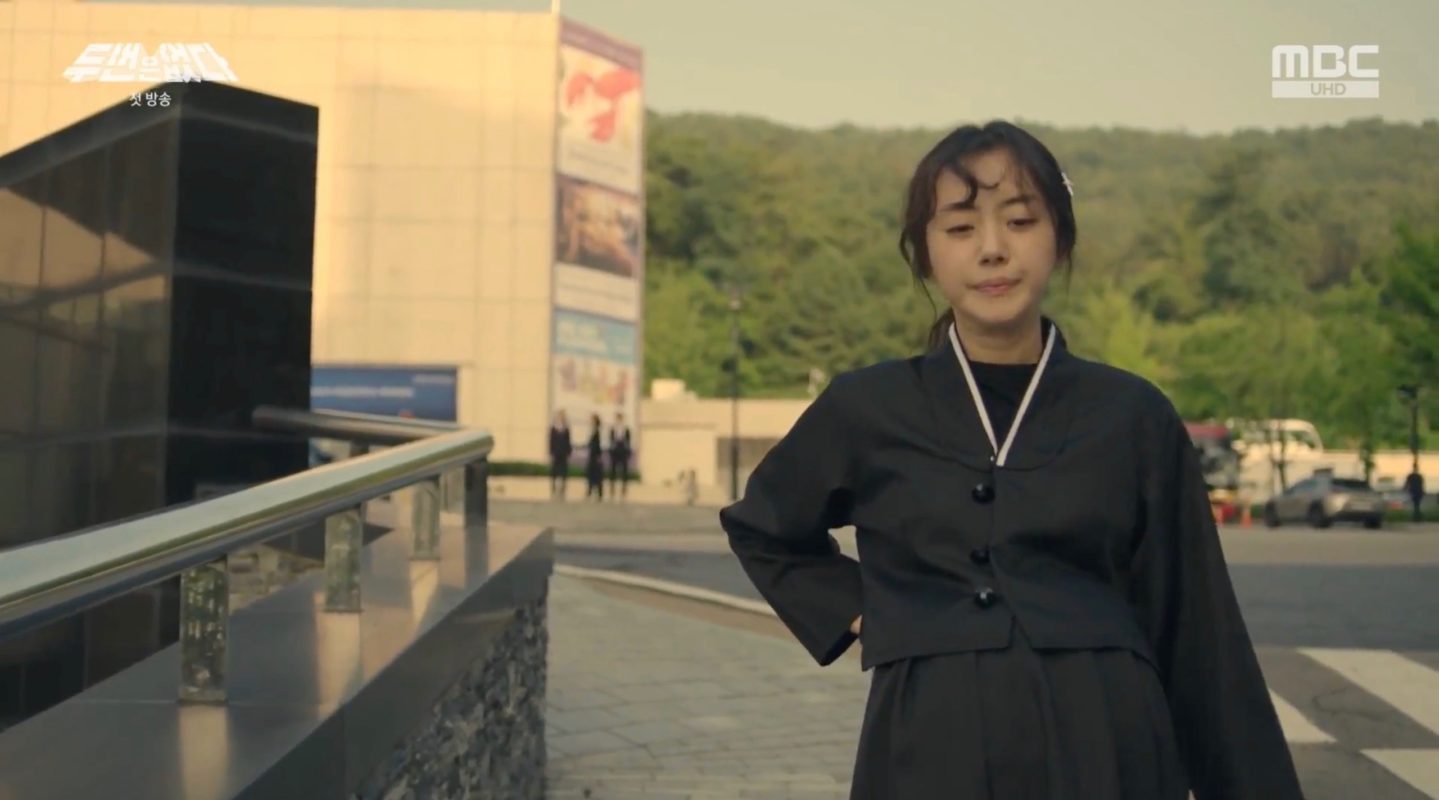 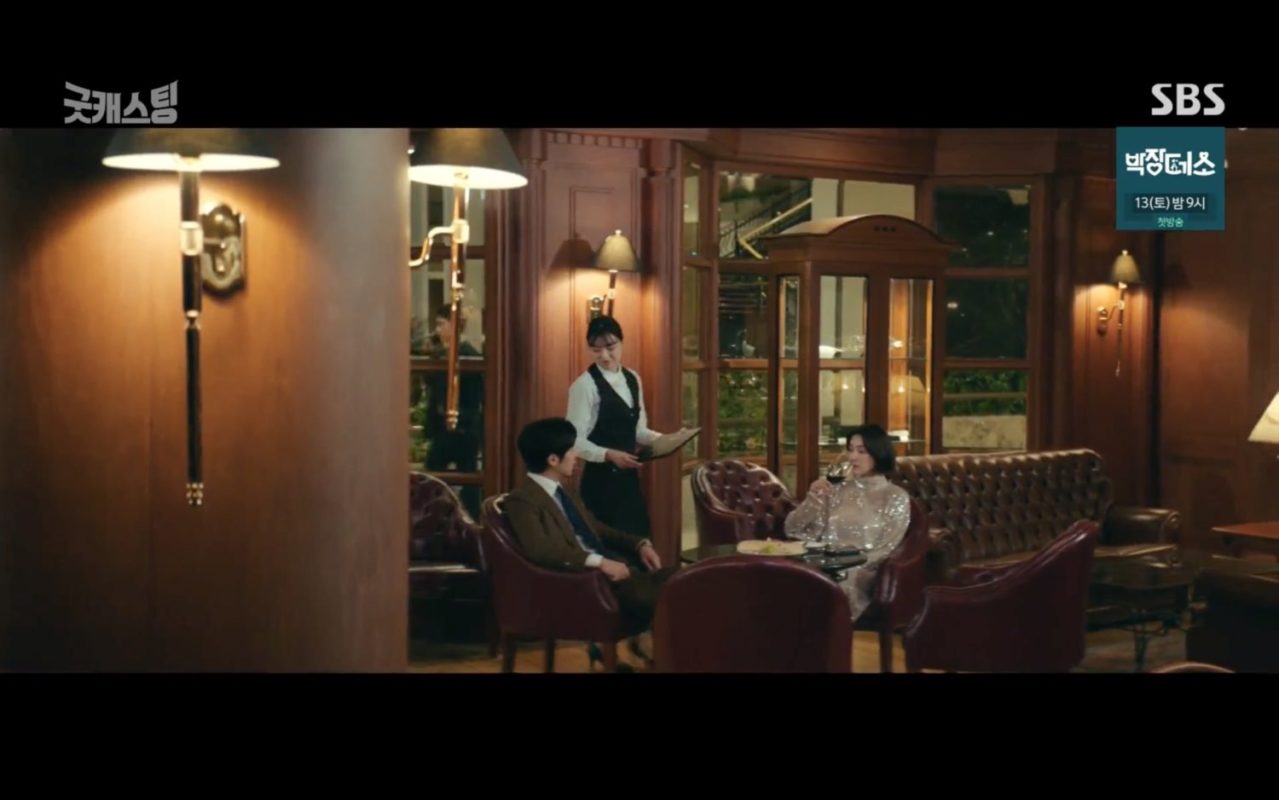 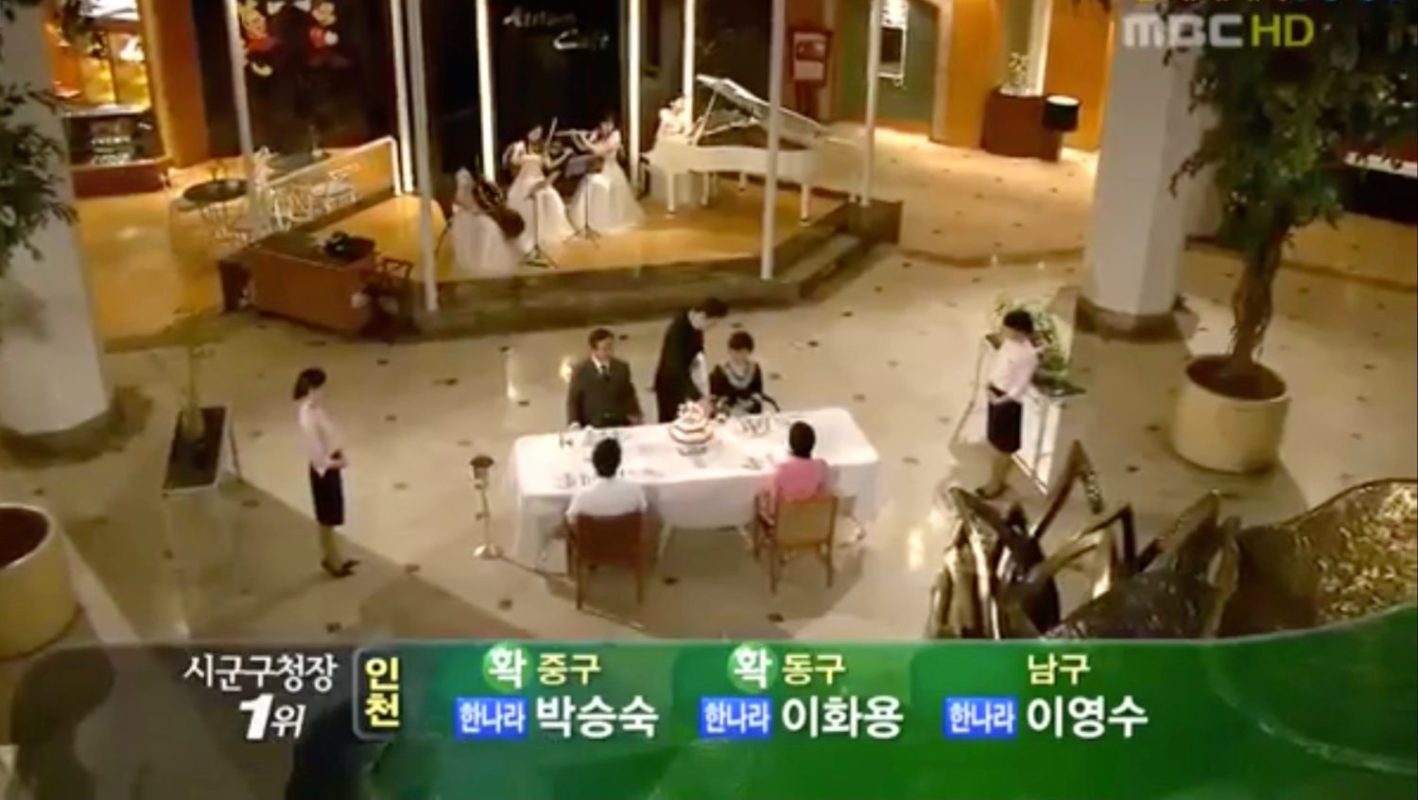 Shim Deok-chul (Park In-hwan) celebrates his 70s birthday with his family at this hotel in episode 1 of Navillera/Like A Butterfly (나빌레라) (tvN, 2021).

When Chae Ji-seung (Wang Bit-na) takes care of her friend’s daughter Kang Ha-eun (Park So-yi) for an afternoon, the two spend some time at this hotel’s lounge after Ha-eun’s tennis lesson in episode 3 of She Would Never Know/Senior, Don’t Put on That Lipstick (선배, 그 립스틱 바르지 마요) (JTBC, 2021). Lee Jae-woon (Lee Gyu-han) follows them here from the tennis court and when Ji-seung absents herself for a moment, he tries to find out from Ha-eun if Ji-seung is married, which makes Ha-eun call out ‘Mom’ when she sees Ji-seung coming back. In episode 15, Lee Hyo-joo (Lee Joo-bin) thinks back to her blind-date at this hotel and how she ran into Lee Jae-Shin (Lee Hyun-wook) when leaving the premises.

Yoon Seok-ho (Lee Sang-yeob) meets up with his ex-wife Sim Hwa-ran (Cha Soo-yeon) at this hotel’s café in full episode 14 of Good Casting (굿캐스팅) (SBS, 2020) and makes it clear to her that they do not have a second chance.

Parts of the exterior of this hotel appear as ‘Guseong Hotel’ in Never Twice/No Second Chances (두번은 없다) (MBC, 2019) — as seen, for instance, in episode 2 when Geum Bak-ha (Park Se-wan) leaves this venue.

The interior of this hotel appears as the interior of the hotel outside of Seoul where the workshop takes place in episode 15 of Still 17 / Thirty But Seventeen / 30 But 17 (서른이지만 열일곱입니다) (SBS, 2018) that Gong Woo-jin (Yang Se-jong) and Woo Seo-ri (Shin Hye-sun) attend. When Seo-ri sees somebody playing the violin at the hotel’s Terrace Lounge, she congratulates the person for their play and ends up playing her violin, a situation that Woo-jin observes from afar.

Yoon Jin-A (Son Ye-Jin) has a blind-date at this hotel’s Terrace Lounge (the exterior is filmed at another hotel) and she coincidently runs into her best friend Seo Kyung-Sun (Jang So-Yeon) who is about to meet her father at the same place in episodes 11-12 of Something in the Rain/Pretty Noona Who Buys Me Food/Pretty Sister Who Treats Me to Meals (밥 잘 사주는 예쁜 누나) (JTBC, 2018). Kyung-sun is furious that Jin-a can do this while dating her brother and the whole situation gets very awkward.

The exterior of the place where the 2018 Myoungjeoing Foundation event takes place in episode 2-3 of The Great Seducer/Tempted (위대한 유혹자) (MBC, 2018) is this hotel (parts of the interior are filmed here). This is where Kwon Shi-Hyun (Woo Do-Hwan) nearly overruns Eun Tae-Hee (Joy from Red Velvet) with his car.

Eun Bong-hee (Nam Ji-Hyun) comes here in episode 1 of Suspicious Partner/Love in Trouble (수상한 파트너) (SBS, 2017) and sees her boyfriend cheating on her. They talk in the Terrace Lounge of this hotel and she defies her boyfriend telling him that she’ll sleep with the first man she’ll run into to make their relationship even. Noh Ji-Wook (Ji Chang-Wook) – here for business meeting – overhears the conversation and steps into Bong-hee’s path so that she’ll bump into him when leaving. “Will you sleep with me?,” she asks him before she notices who he actually is.

This is where the university alumni meeting takes place that Yoon So-Ah (Shin Se-Kyung) attends to find somebody that can lend her money in episode 3 of Bride of the Water God 2017 (하백의 신부 2017) (tvN, 2017). Of course, she runs into Hoo Ye (Lim Ju-Hwan) and Habaek (Nam Joo-Hyuk) becomes her savior.

Seo Ha-neul (Sung Yu-ri of former Fin.K.L) has a family dinner at this hotel for her birthday in episode 1 of One Fine Day (어느 멋진 날/어느 멋진날) (MBC, 2006) and this is where Kang Dong-ha (Namkoong Min) sees her and understands that she is from a different social class than he thought.

Grand Hilton Seoul [그랜드힐튼 서울], established in May 1988 with a lobby resembling a historic European Castle, is a five-star hotel located in Seoul’s neighborhood Hongeun [Hongeun-dong/홍은동] in the Seodaemun District [Seodaemun-gu/서대문구]. It was established in May 1988 as Swiss Grand Hotel Seoul [스위스 그랜드 호텔]. In April 2002, the hotel partnered with the Hilton Group and renamed it into Grand Hilton Seoul [그랜드힐튼 서울]. In January 2020, the hotel was rebranded to its original name, Swiss Grand Hotel.