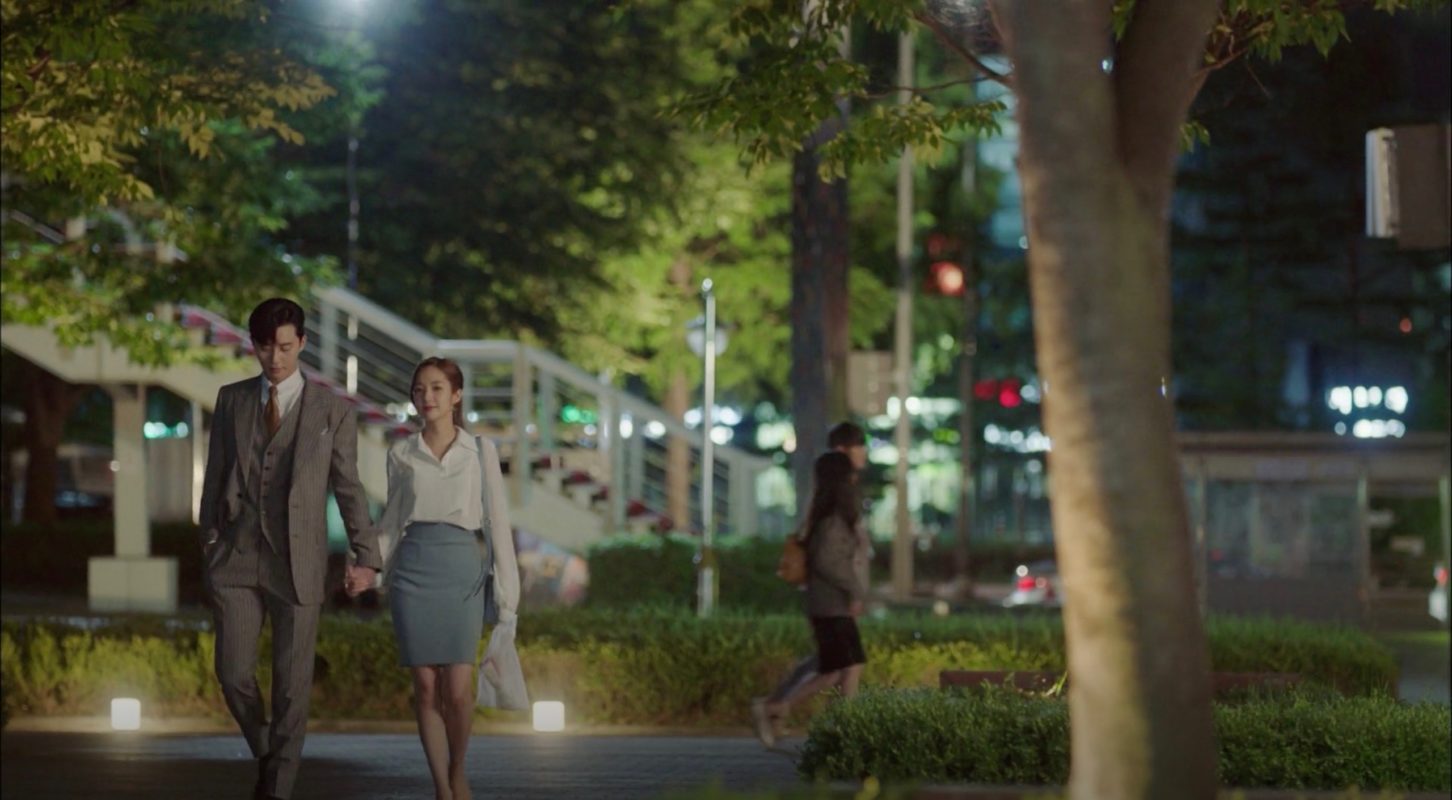 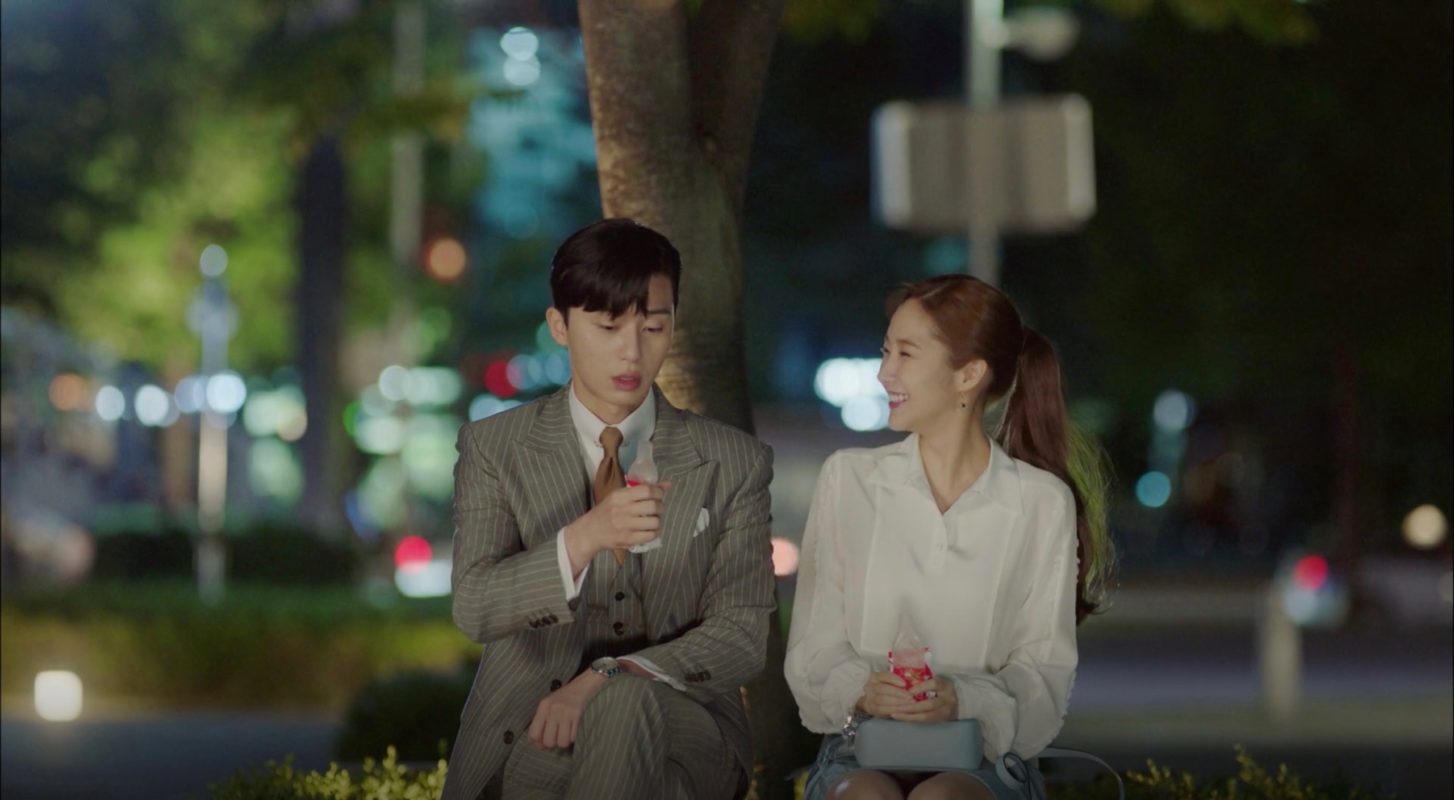 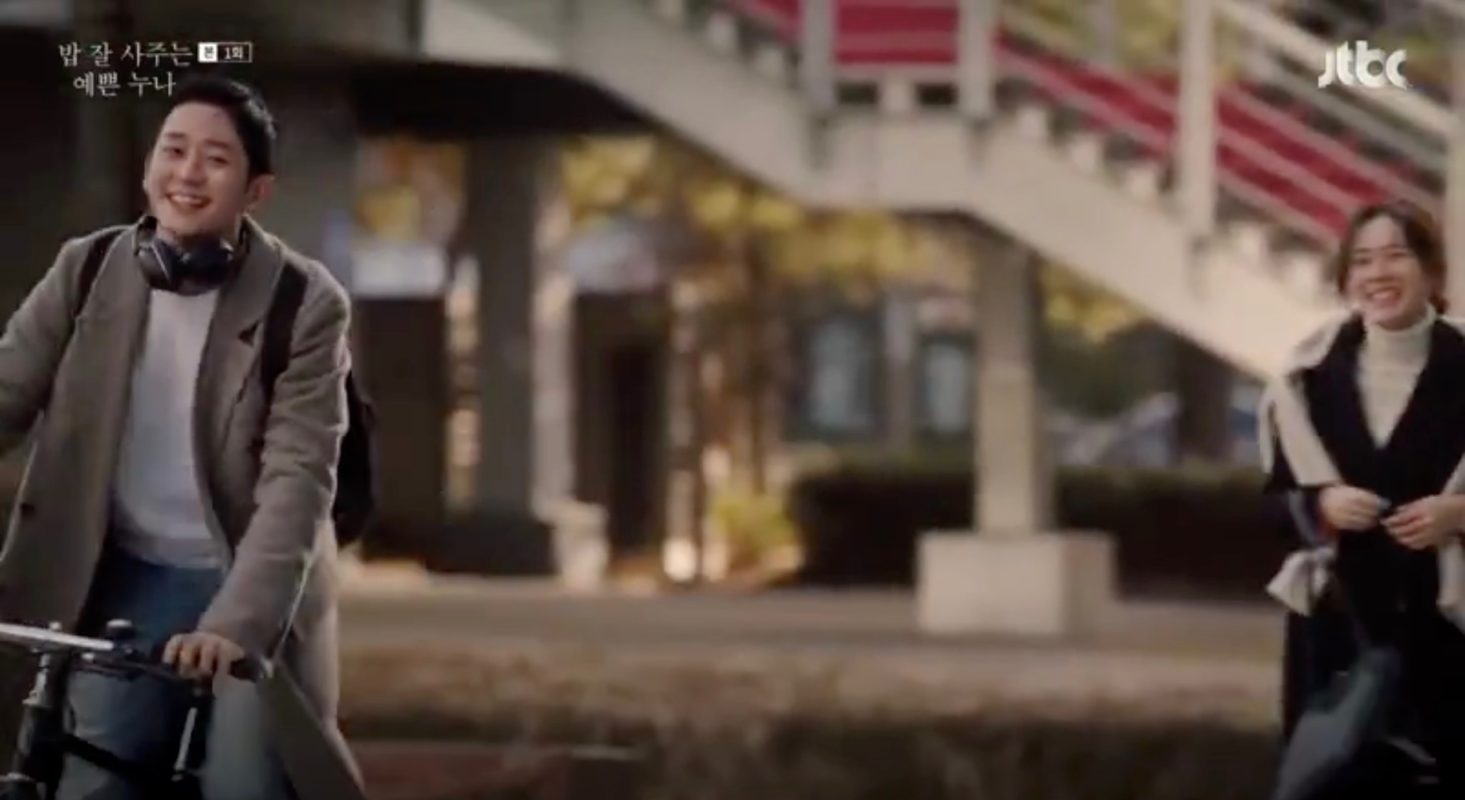 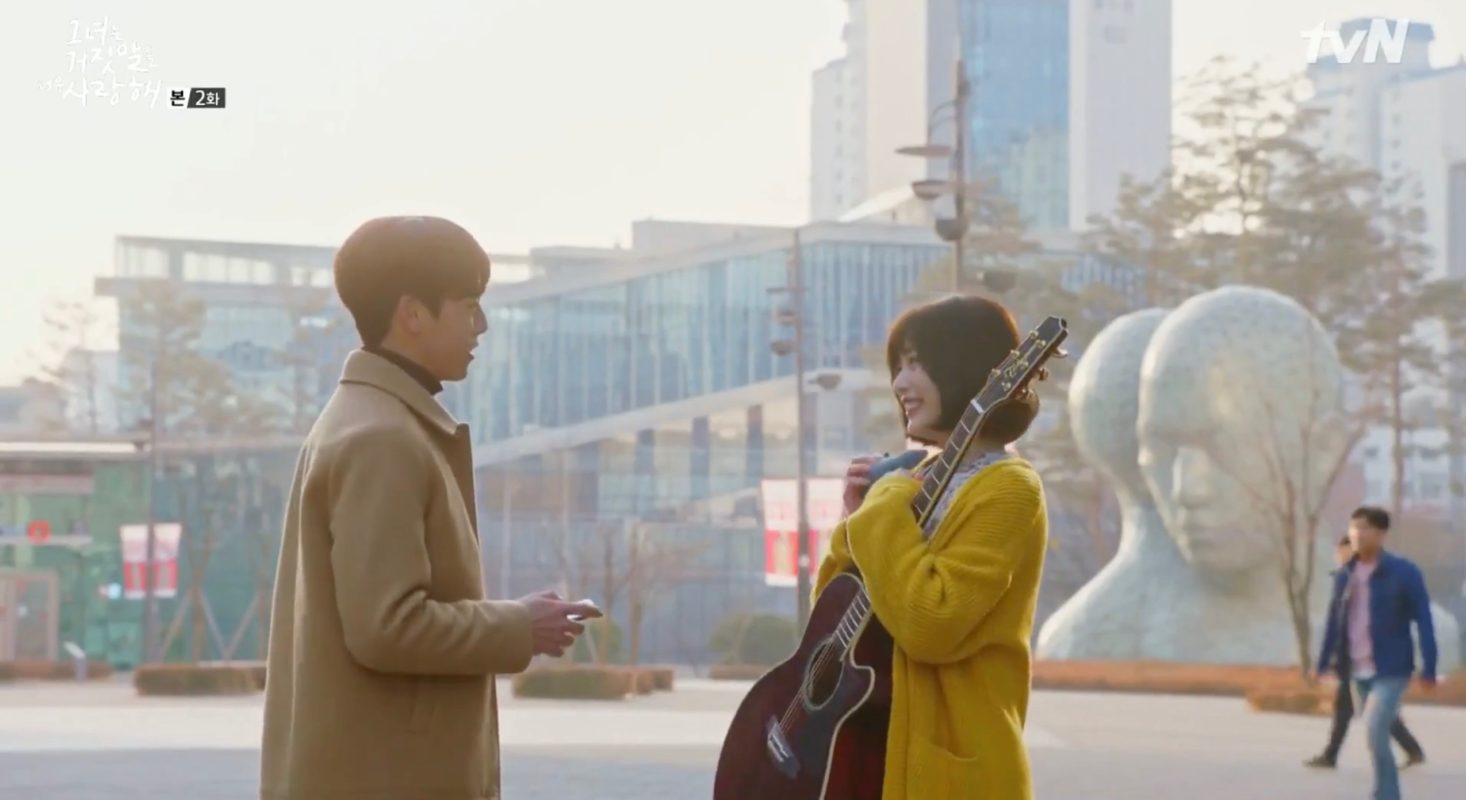 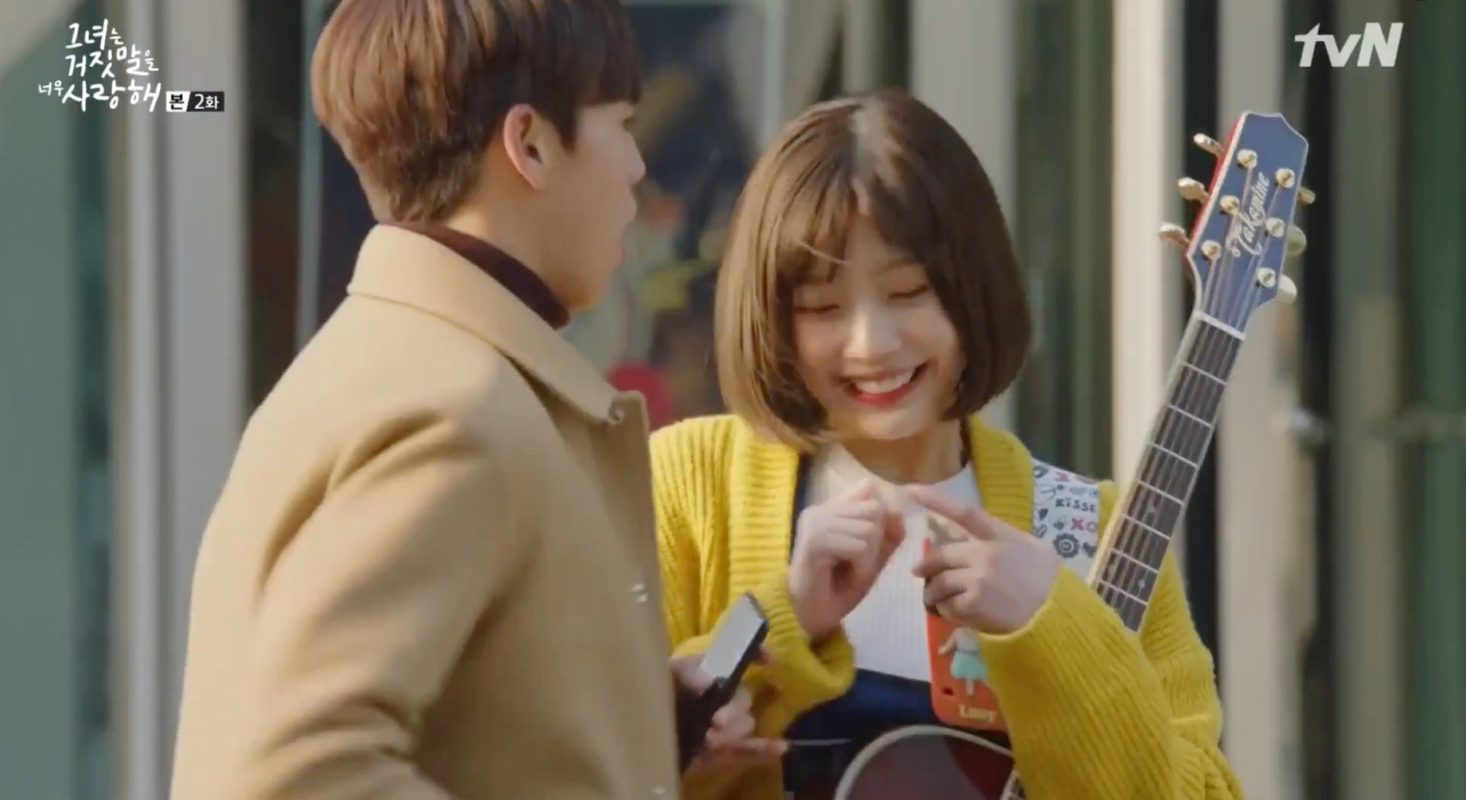 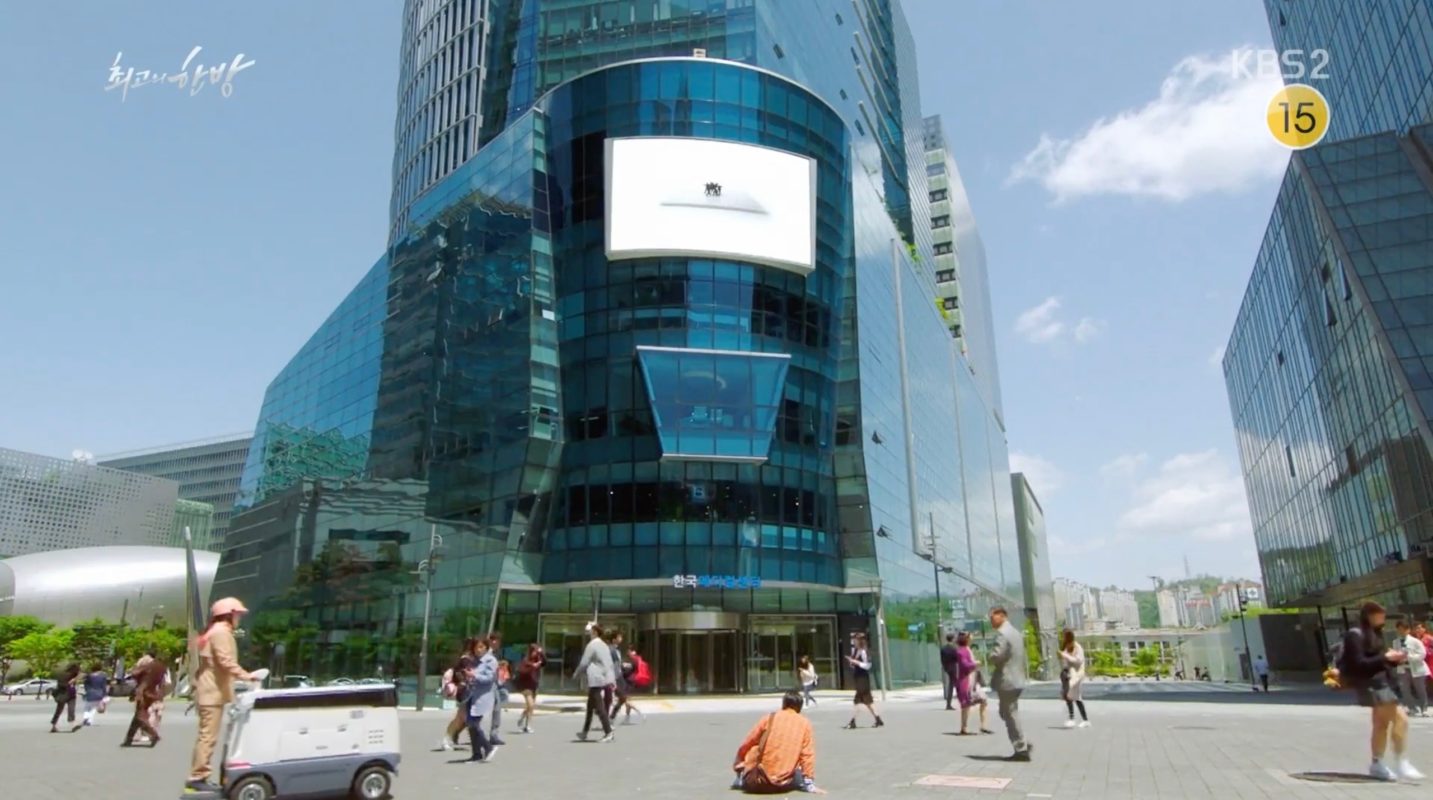 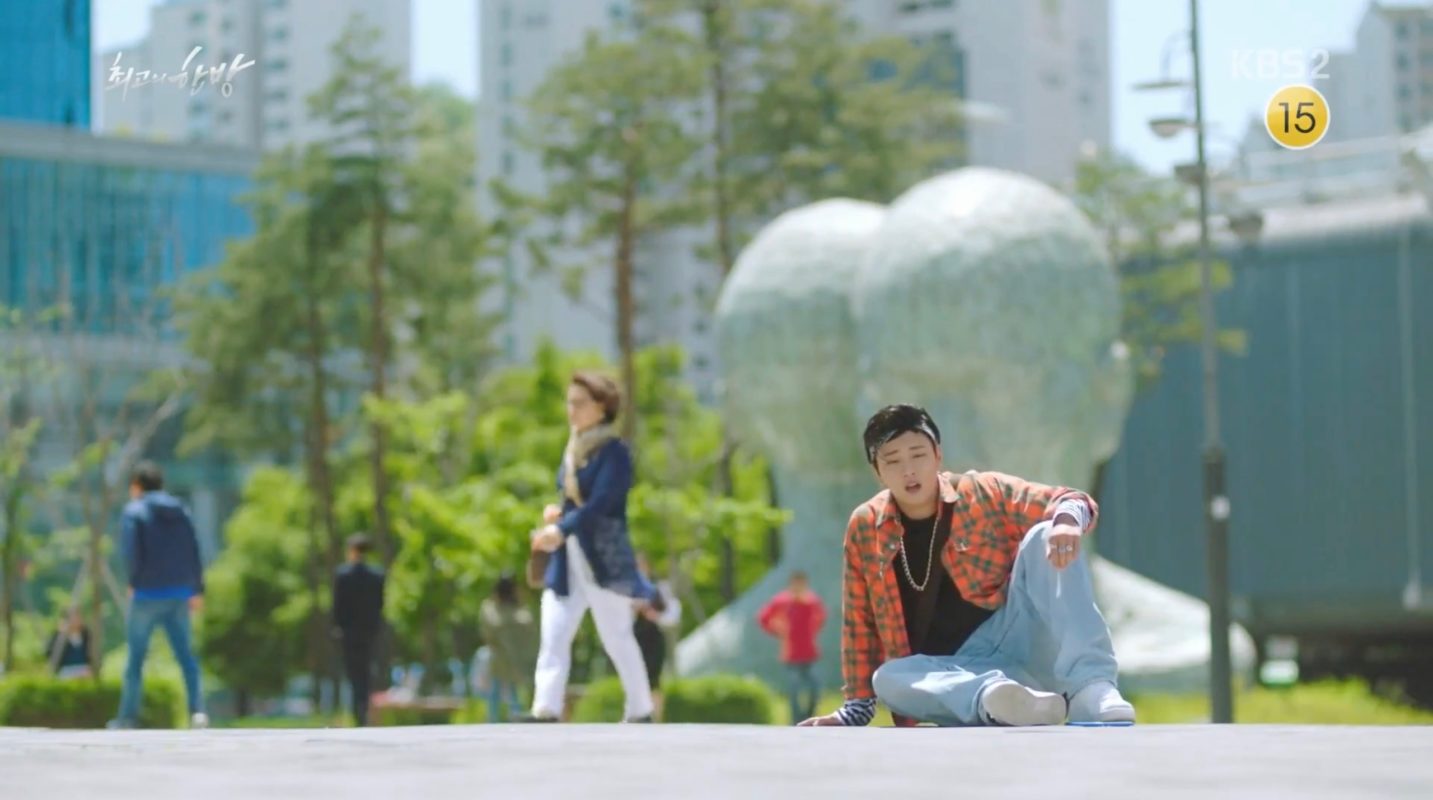 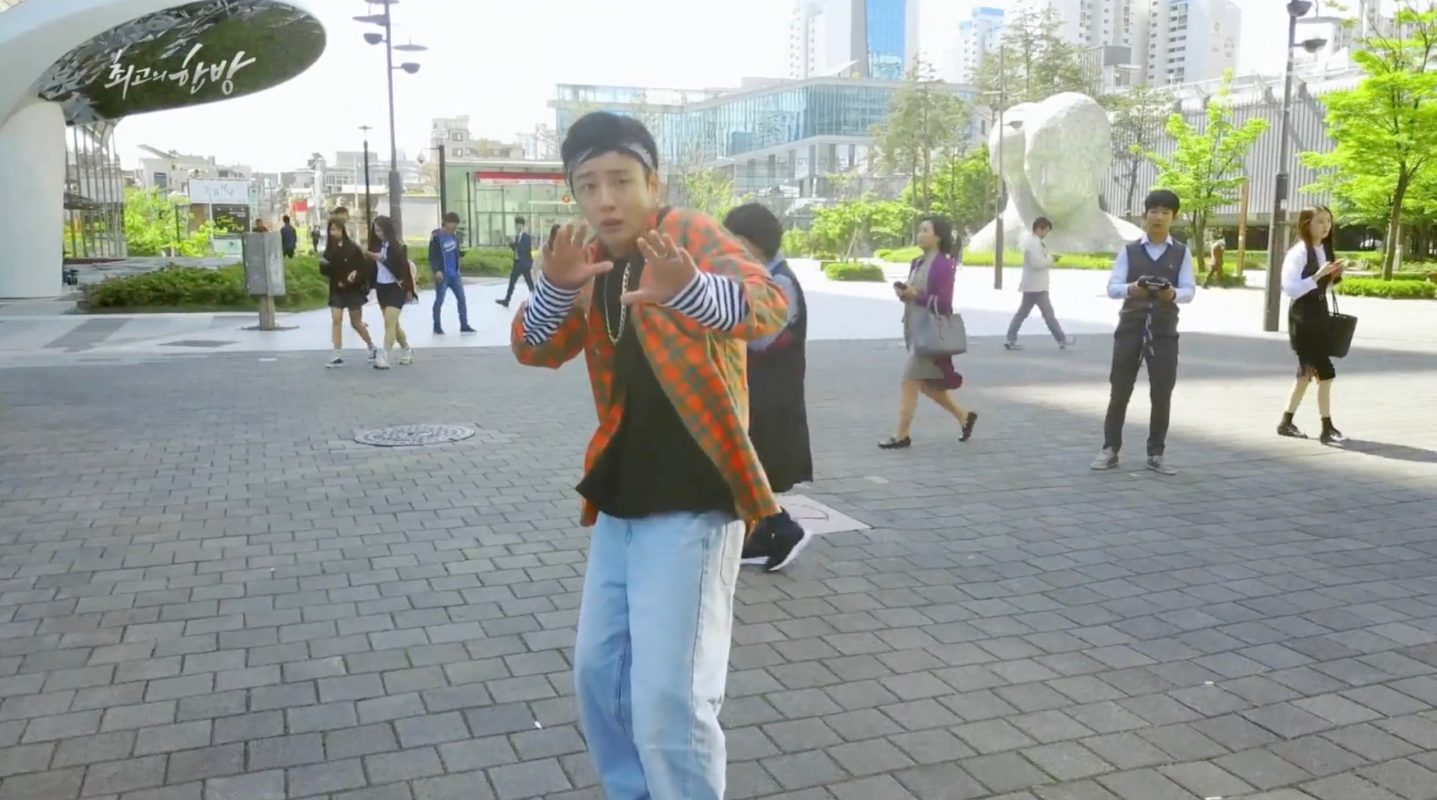 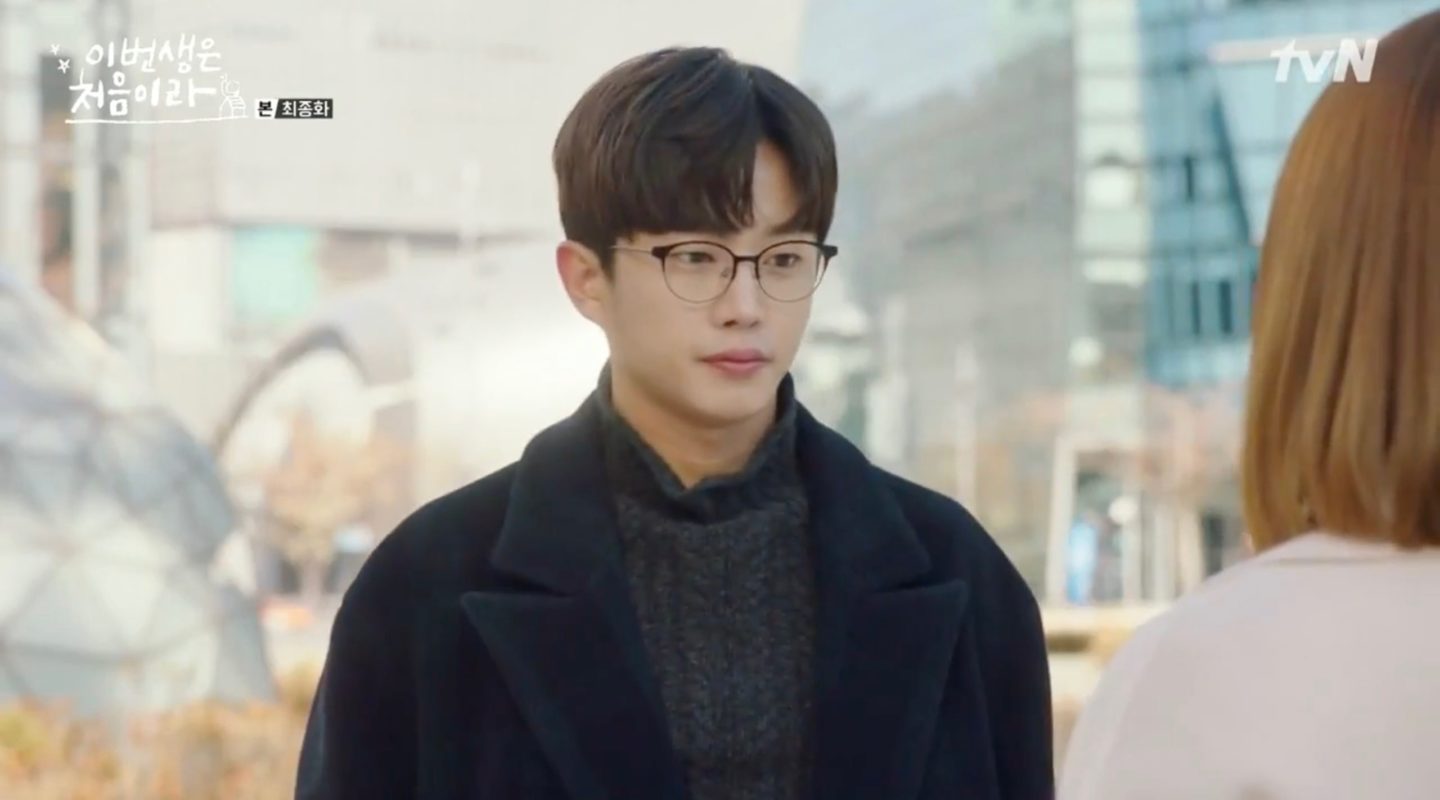 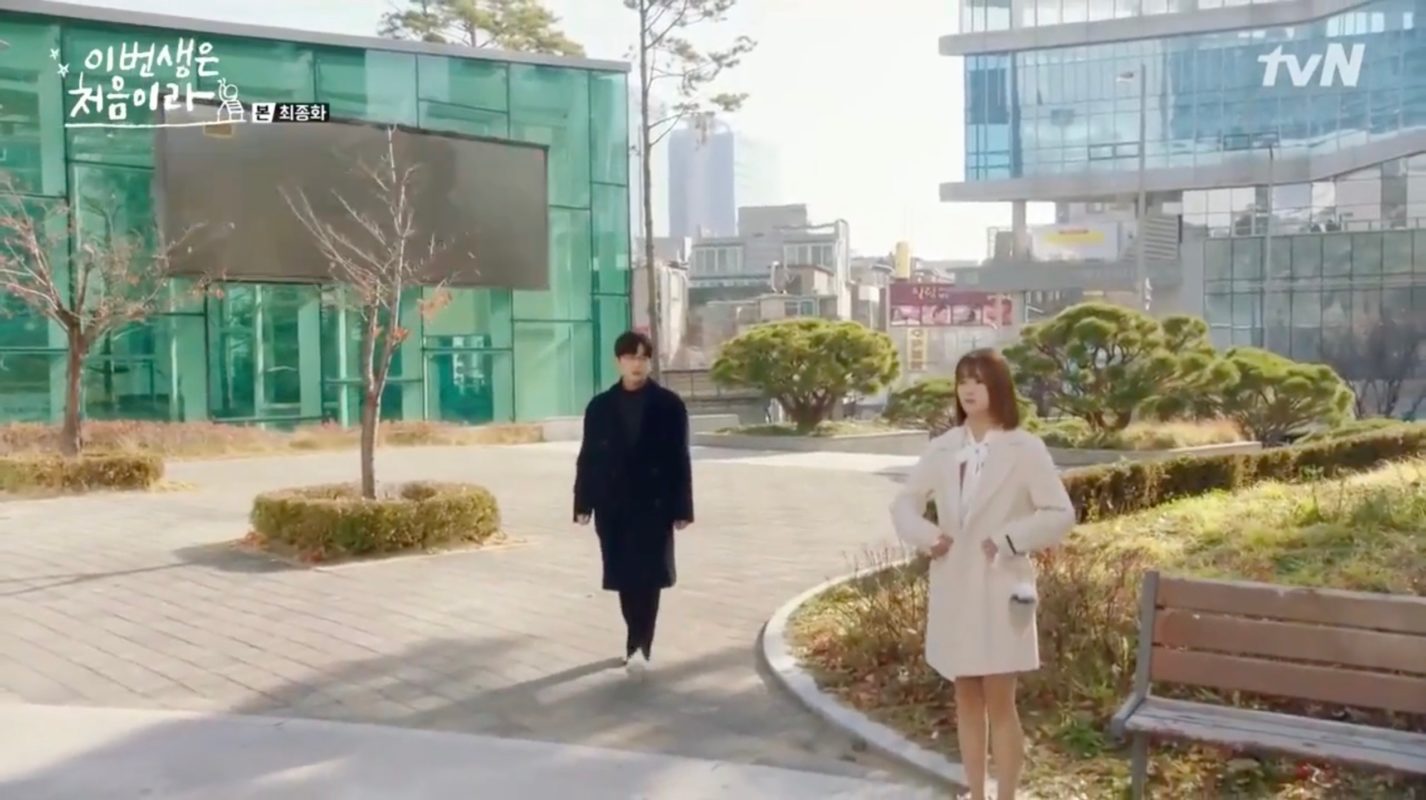 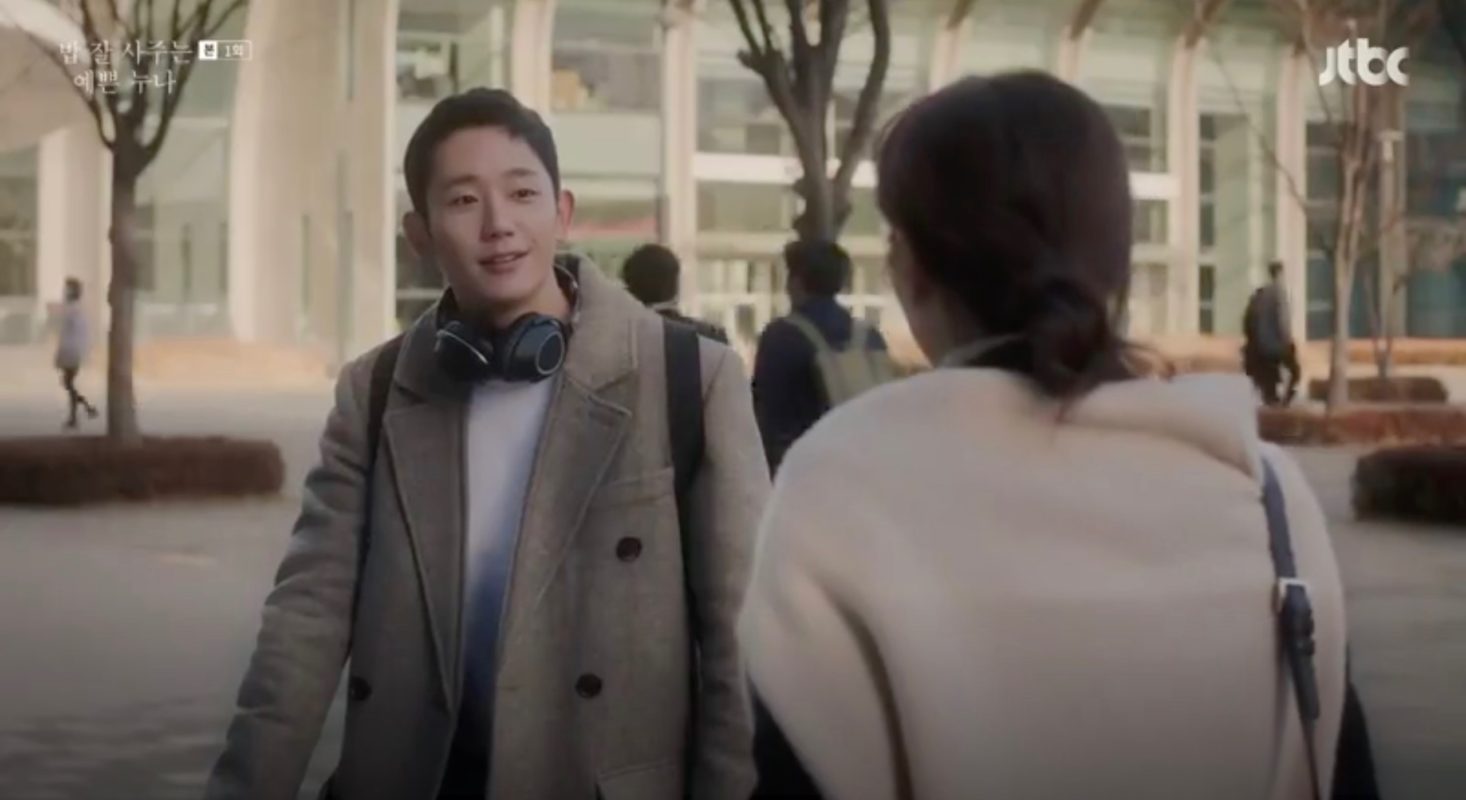 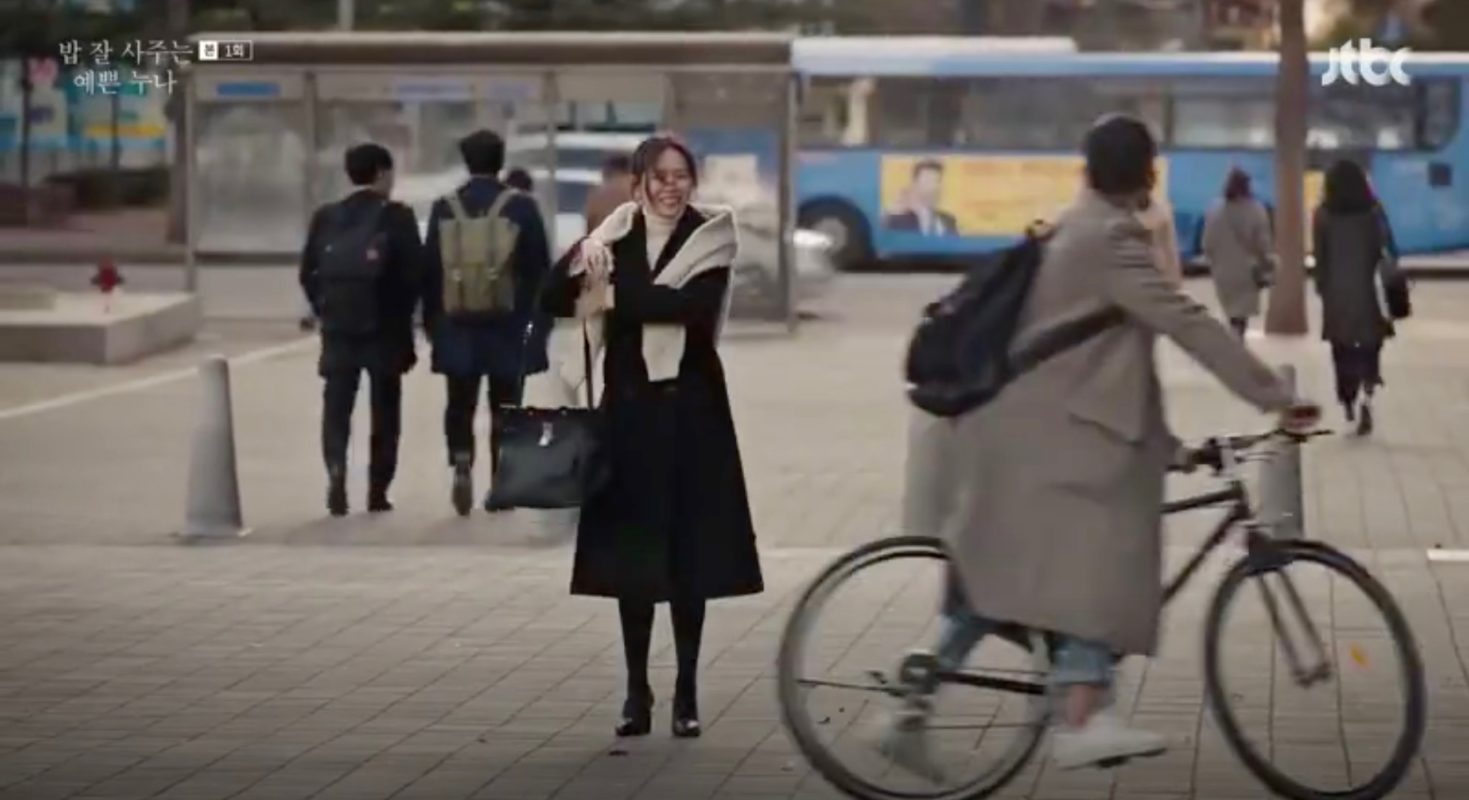 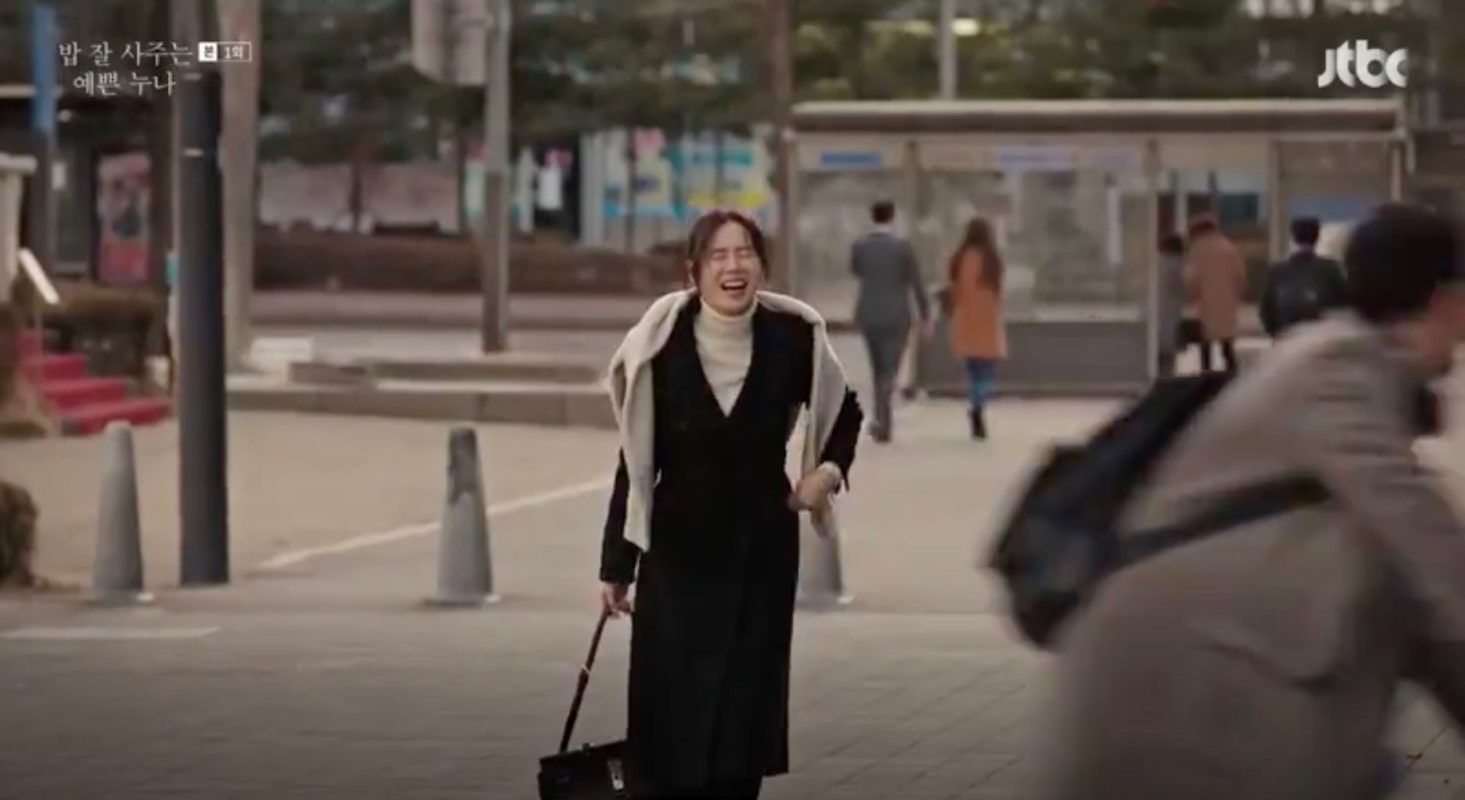 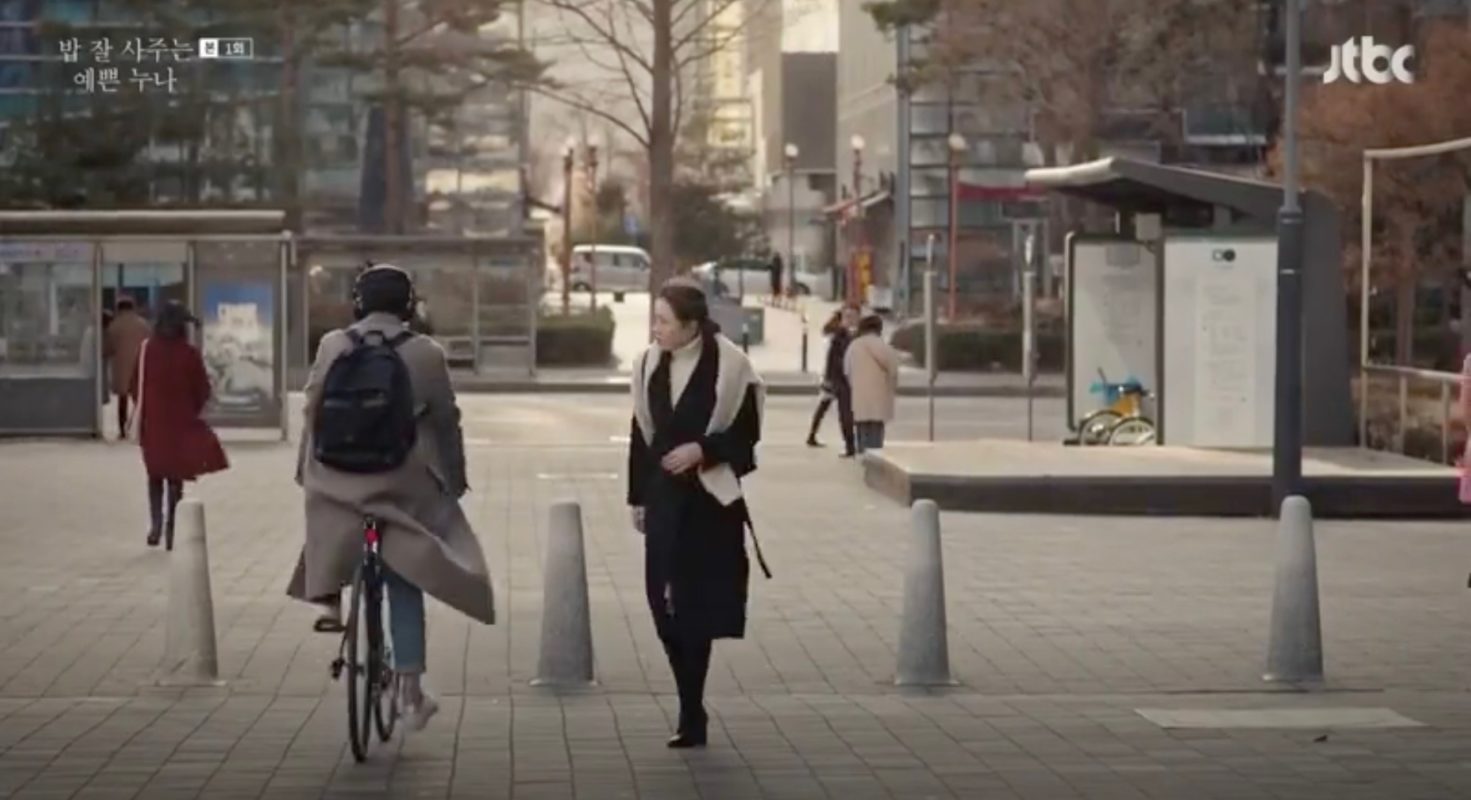 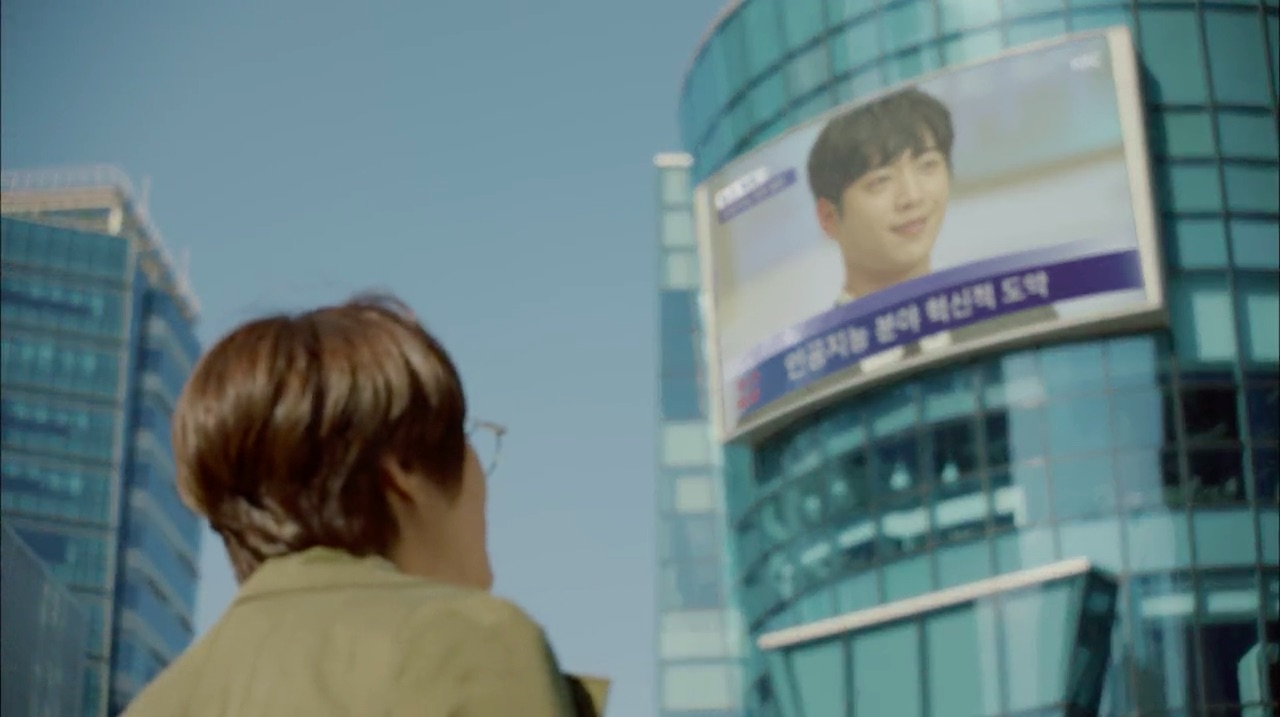 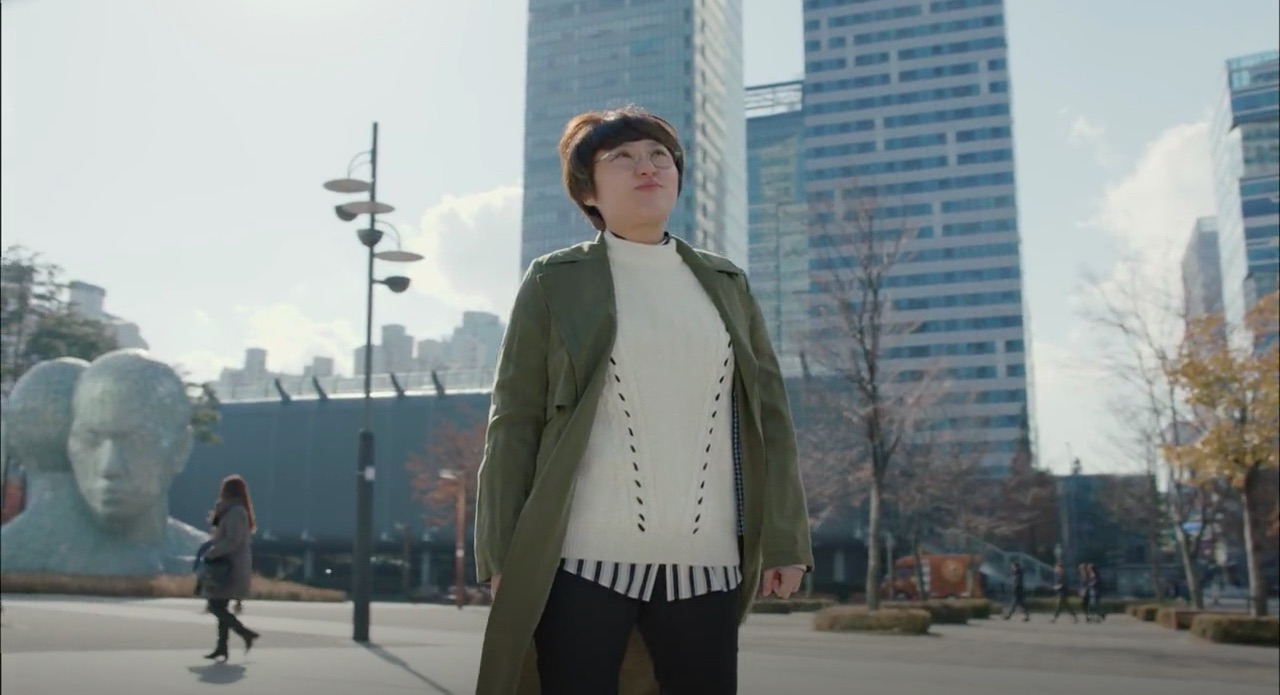 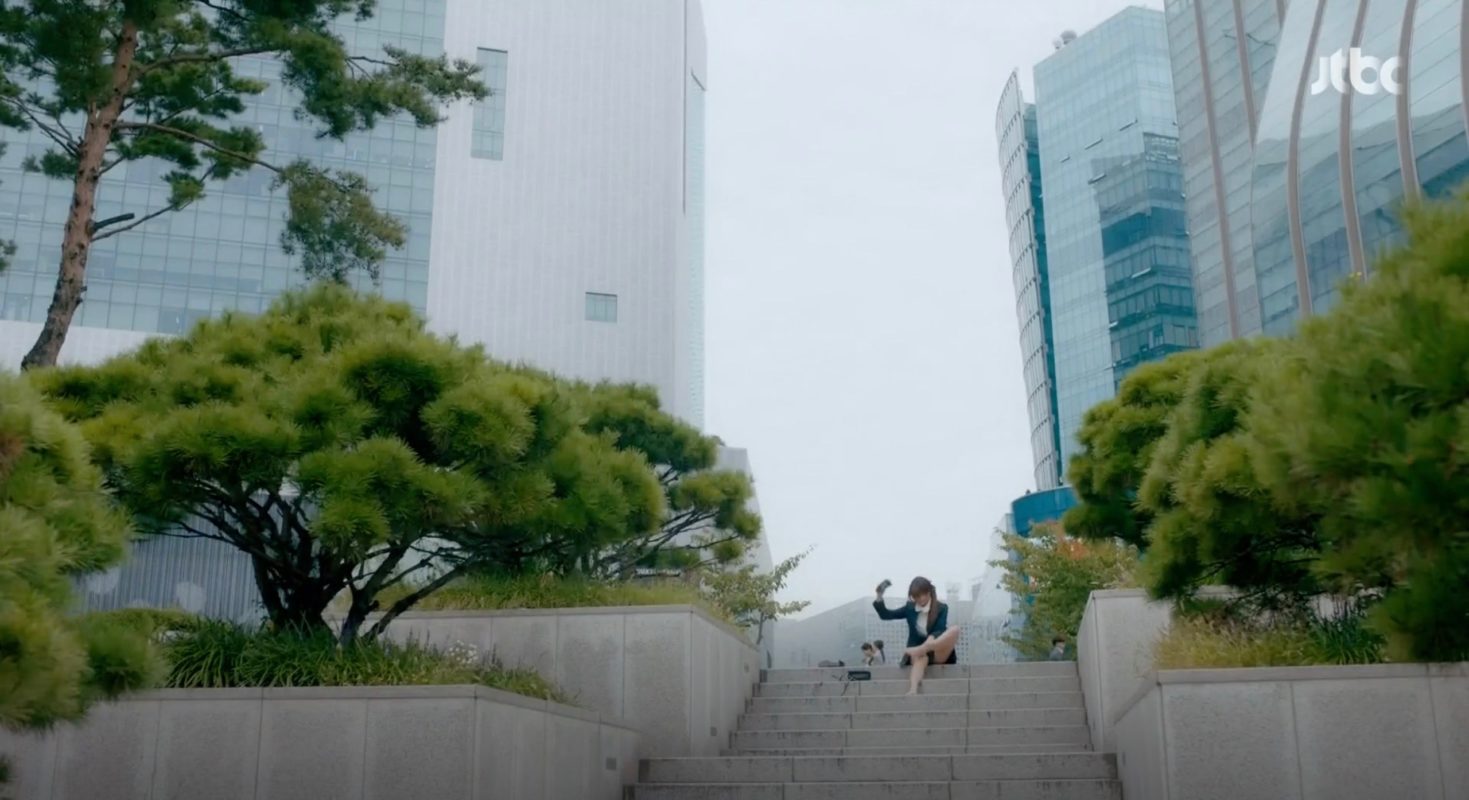 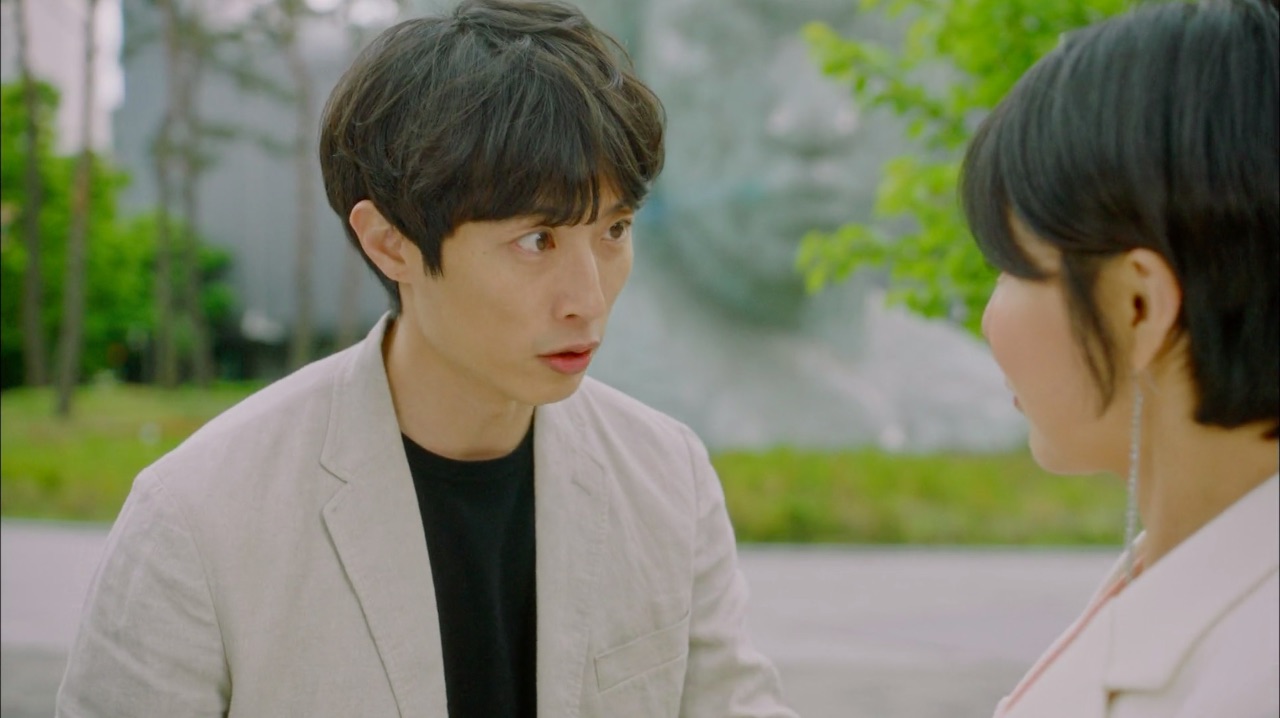 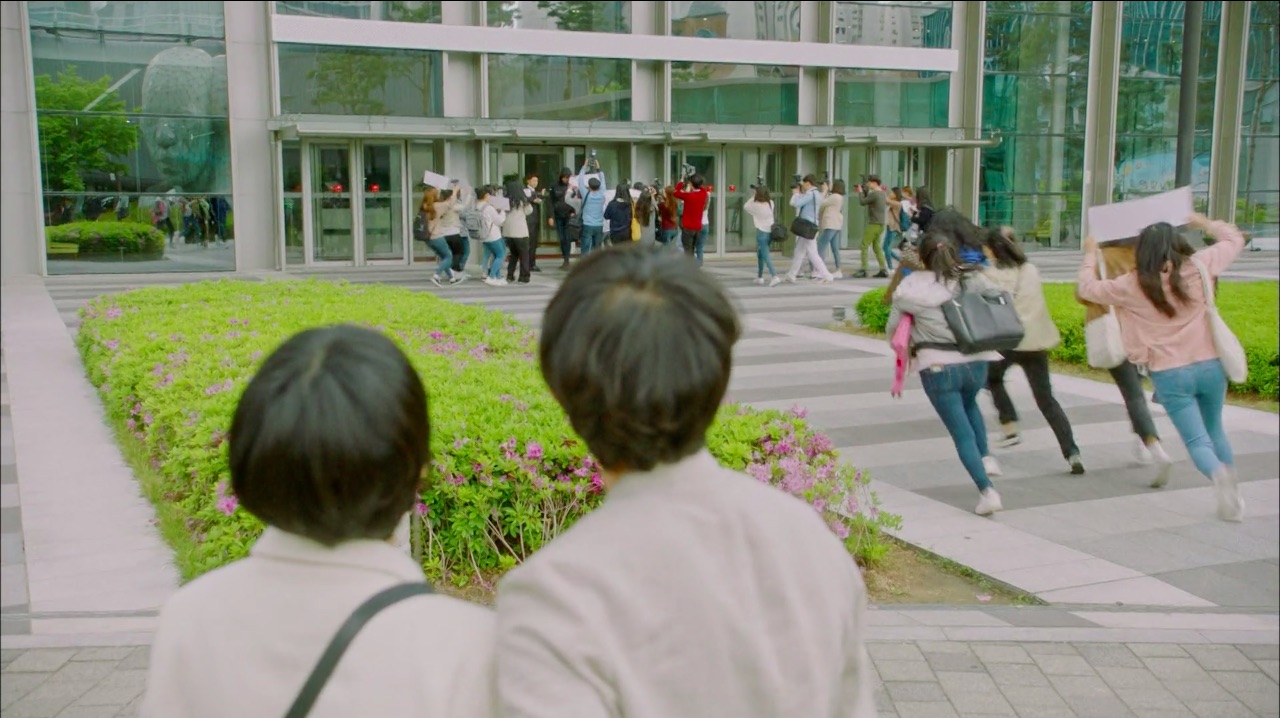 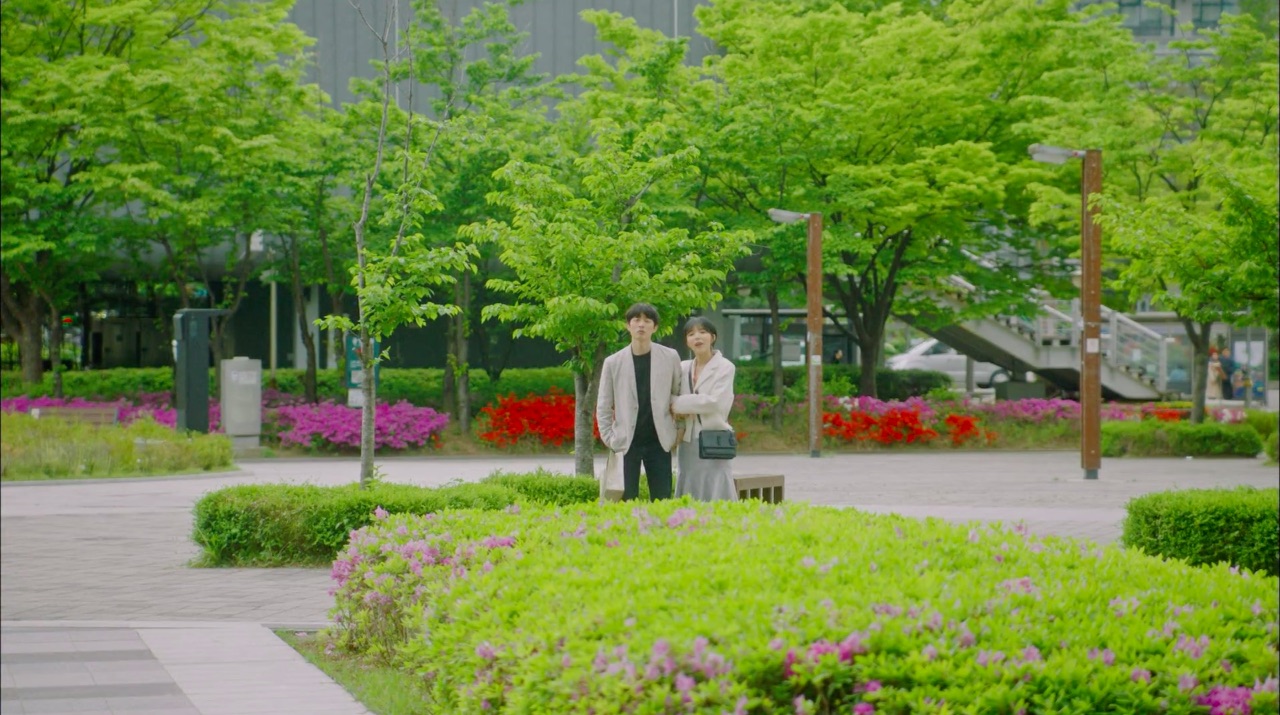 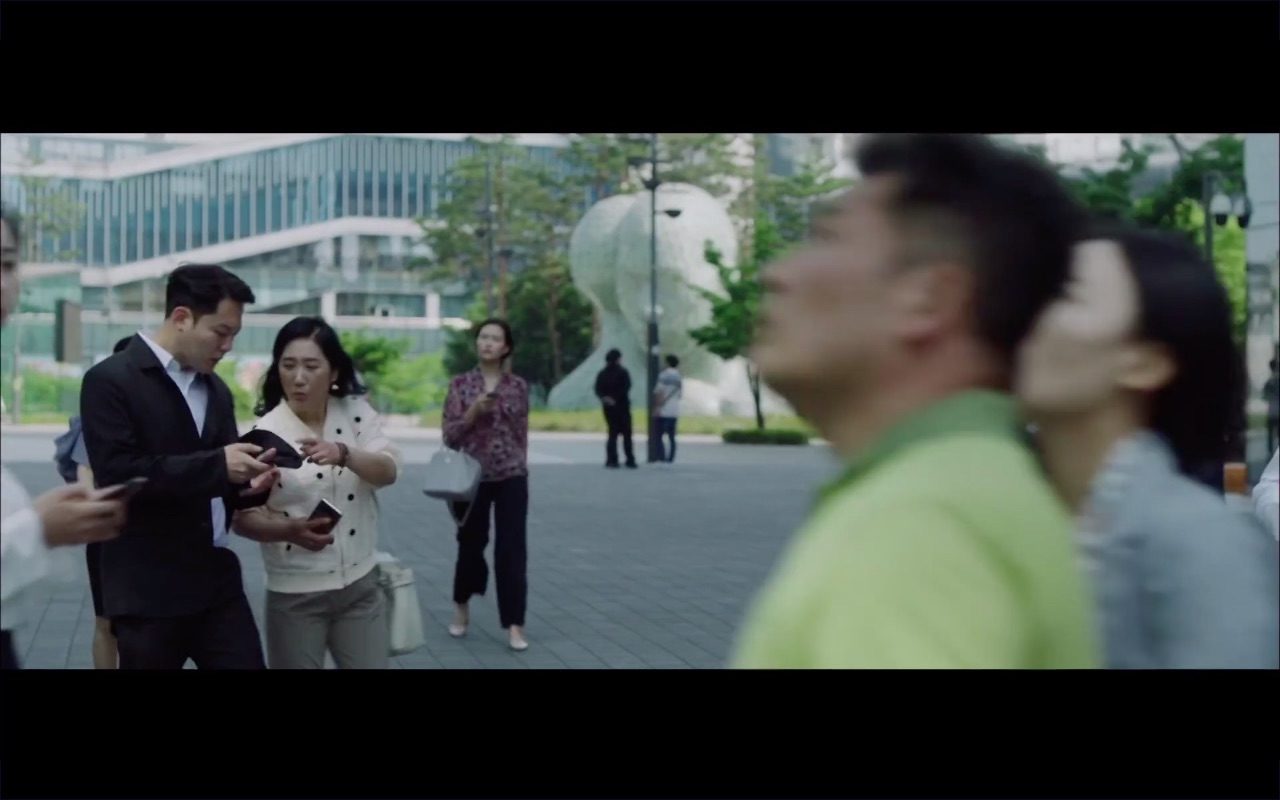 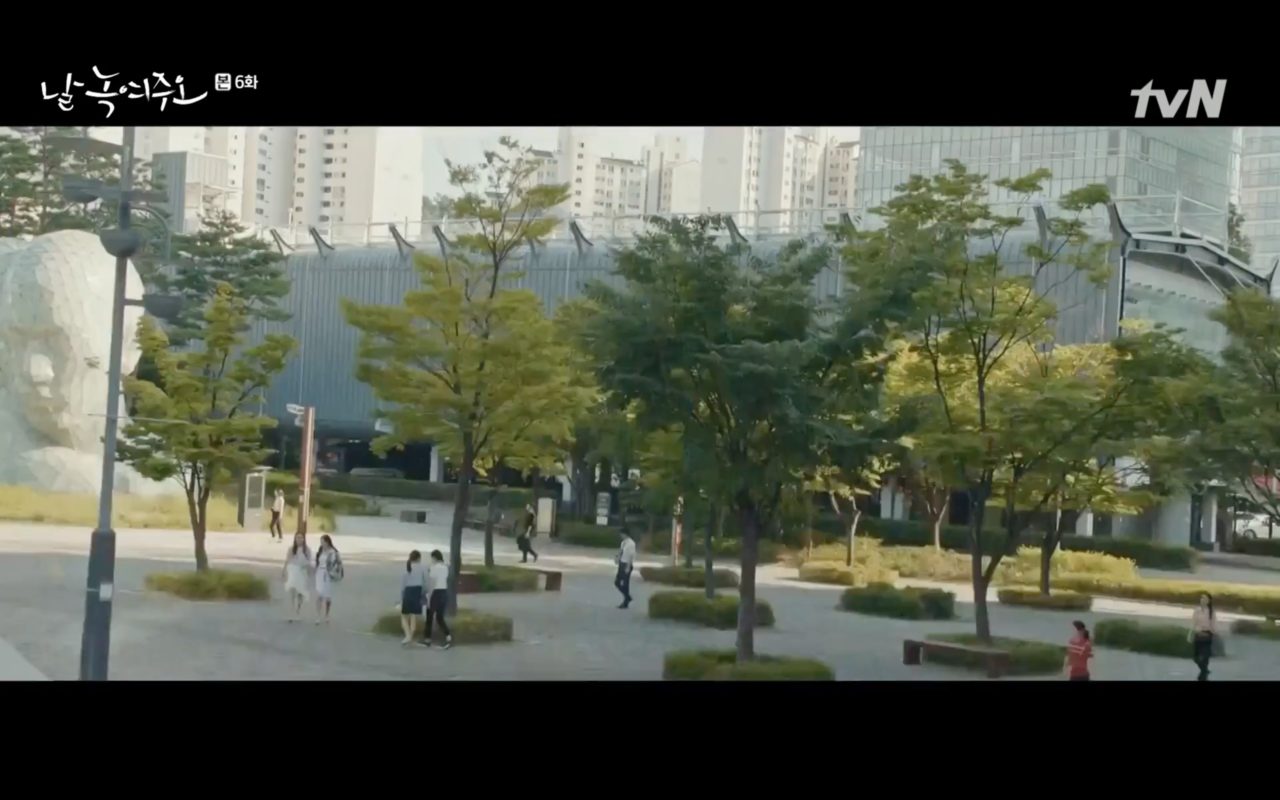 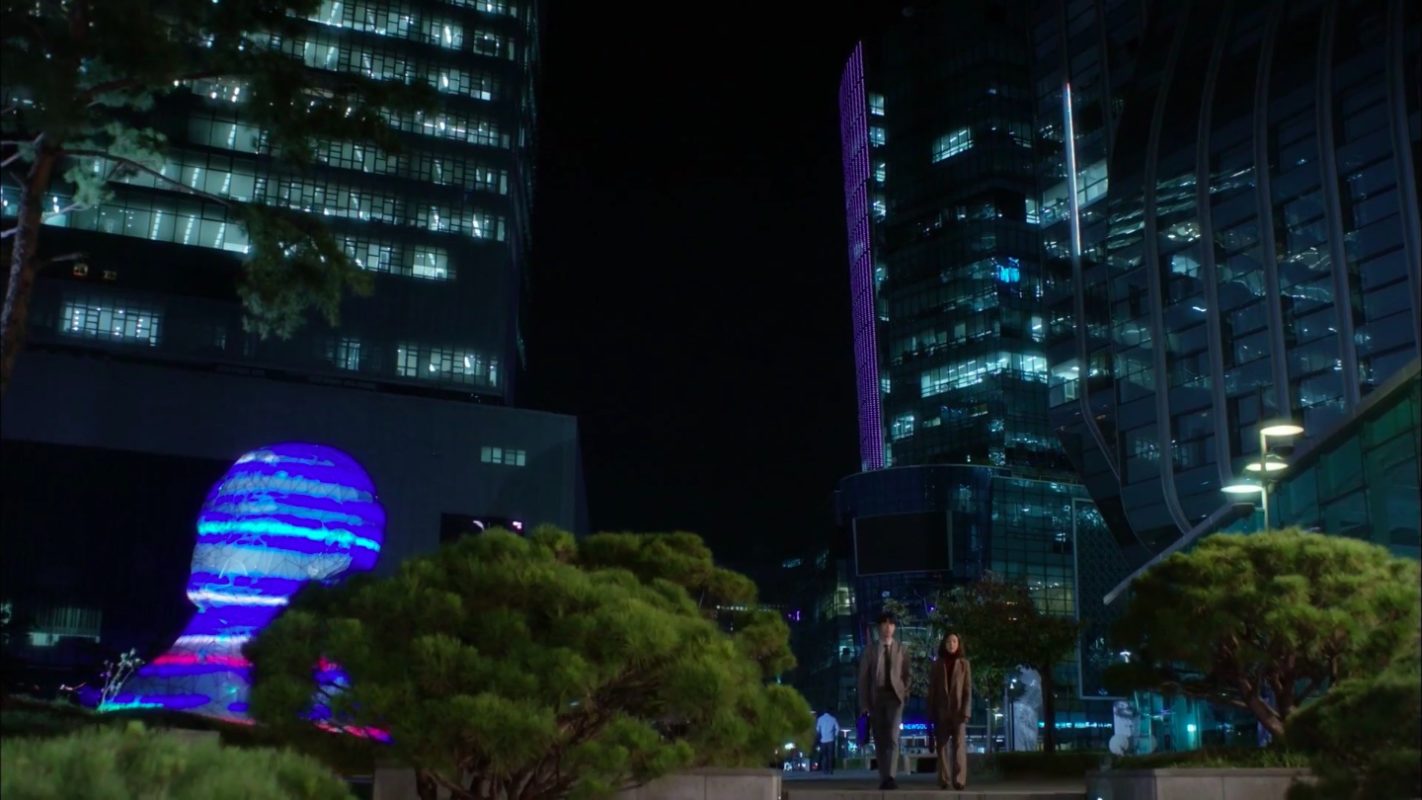 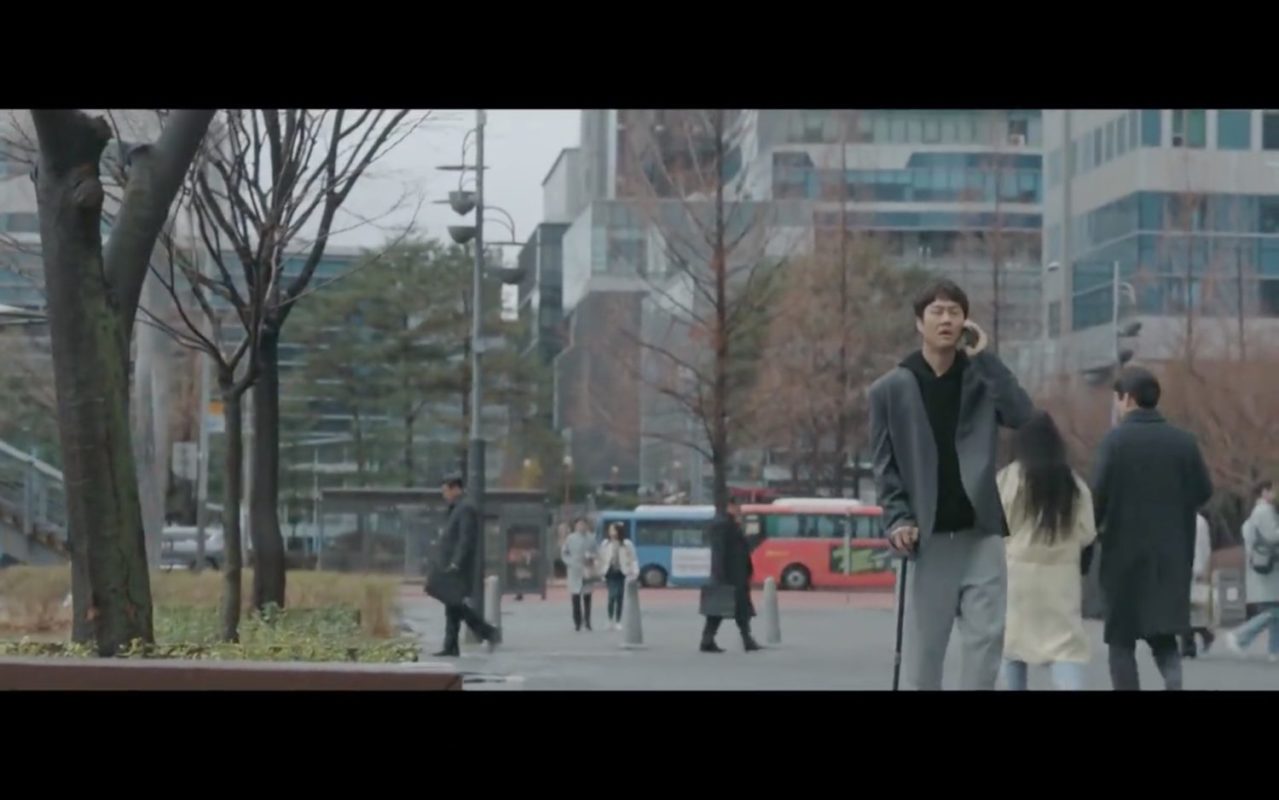 Jegal Gil (Jung Woo) walks through this park in episode 1 of Mental Coach Jegal (멘탈코치 제갈길) (tvN, 2022) and sees a report on a public screen how speed-racer Cha Ga-eul (Lee Yoo-mi) was hurt in a competition.

After quitting her job at Lucca The Tea, Seo Dal-mi (Bae Suzy) passes this place with her new plant in hand, pleased with the decision she’s made, in episode 3 of Start-Up (스타트업) (tvN/Netflix, 2020).

Good friends Oh Young-sun (Seo Jung-yeon) and Park Kyung-Ja (Park Hee Jin) cross through park when heading to the police station in episode 6 of Melting Me Softly/Let Me Melt (날 녹여주오) (tvN, 2019) at which Young-sun’s husband Hwang Byeong-sim (Shim Hyung-tak) is questioned. In episode 12, Son Hyun-ki (Lim Won-hee) and Park Kyung-ja (Park Hee-jin) meet up at this park for a date.

Passers-by receive news about the ‘spree killer’ as they walk here in episode 11 (full episode 6) of Partners for Justice 2/Investigation Couple 2 (검법남녀 2) (MBC, 2019).

Lee Sun-joo (Park Jin-joo) and Kang Seung-min (Im Ji-kyu) take a walk here after lunch in episode 9 of Her Private Life (그녀의 사생활) (tvN, 2019). As they watch a group of fangirls run by them towards the DDMC building, Sun-joo reminisces on the time she met Seung-min. “Fangirling made our relationship,” she reminds him.

After another turn-down after a job-interview, frustrated sits down on the stairs of this park in episode 2 of Clean With Passion For Now (일단 뜨겁게 청소하라) (JTBC, 2018-19).

Reporter Jo (Kim Hyun-sook) stands proudly in the middle of this square in episode 33 of Are You Human?/Are You Human Too (너도 인간이니?) (KBS2, 2018), as she watches Nam Shin III’s  (Seo Kang-joon) reveal as an AI robot goes up on news stories broadcast on the LCD screens of surrounding buildings.

Kim Mi-so (Park Min-young) and Lee Young-joon (Park Seo-joon) come here for a night walk in episode 11 of Why Secretary Kim/What’s Wrong With Secretary Kim (김비서가 왜 그럴까) (tvN, 2018) and they sit down to eat a freezie (his first) and he asks her to stay the night at his place because he is afraid that she will have nightmares and insomnia since she has recovered her memories. They sit down in front of one of the trees planted east of the THEY sculpture, located opposite the side entrance of the CJ E&M Building (문화창조융합센터).

It is at the far east end of this park that Yoon Jin-ah (Son Ye-jin) and Seo Joon-hee (Jung Hae-in) meet again in episode 1 of Something in the Rain/Pretty Noona Who Buys Me Food/Pretty Sister Who Treats Me to Meals (밥 잘 사주는 예쁜 누나) (JTBC, 2018) — she going to work and he coming from work at DDMC [동아디지털미디어센터] (which can also be seen in the background). The staircase in the background belongs to the Digital Media City building.

It is here where Sim Won-seok (Kim Min-suk) tells Yoon Bo-mi that he can’t accept her proposal because he is still too attached to Yang Ho-rang (Kim Ga-eun) in episode 16 of Because This Is My First Life/This Life Is Our First (이번 생은 처음이라) (tvN, 2017).

This is where Yoo Hyun-jae (Yoon Si-yoon) really understands that he just time-traveled in episode 3 of The Best Hit (최고의 한방) (KBS2, 2017).

Ma Yi-deum (Jung Ryeo-won) and Yeo Jin-wook walk along this path past DDMC while chatting with each other about their hometowns, in episode 7 of Witch’s Court/Witch at Court (마녀의 법정) (KBS2, 2017)

“Do you believe in love at first sight?”, is what Yoon So-Rim (Joy) directly asks Kang Han-kyeol (Lee Hyun-woo) when catching up to him in episode 2 of The Liar and His Lover/Lovely Love Lie (그녀는 거짓말을 너무 사랑해) (MBC, 2017). He’s only focused on the fact that she has the recording of his song and asks for her number to be able to convince her to delete it in the short term and he returns: “It’s because I do believe in love at first sight.”… and so starts their relationship built on a lie.

The opening of episode 4 of  The Sixth Sense/Six Sense [식스센스] (tvN, 2020) (featuring guest Lee Sang-woo) was filmed here, just in front of the art sculpture THEY.

In its center is art sculpture ‘THEY (그들)’ by Lee Jin-joon (이진준/李進俊, b. 1974), which is featured in most of the scenes that take place here. The 13 meter-high sculpture shows a man and a woman hugging each other; their heads on each other’s shoulders. Installed in March 2010, this sculpture represents “the future of science and technology through the harmony of digital + analog, man + woman”. The message of this art piece is: “You shouldn’t only see what you want to see and listen to what you want to hear.” Artist Lee was chosen “as the first director of KAIST Museum of Art, which is scheduled to open in 2023.”

Getting here
Digital Media City Station [디지털미디어시티역], Seoul Subway Line 6, Exit 9.
▶ The closest bus stop to the Why Secretary Kim location is Sangam DMC Building.YTN (상암DMC홍보관.YTN — no. 14286)
▶ It is served by buses like no. 271 from Hapjeong station and 7711 from Hongdae.