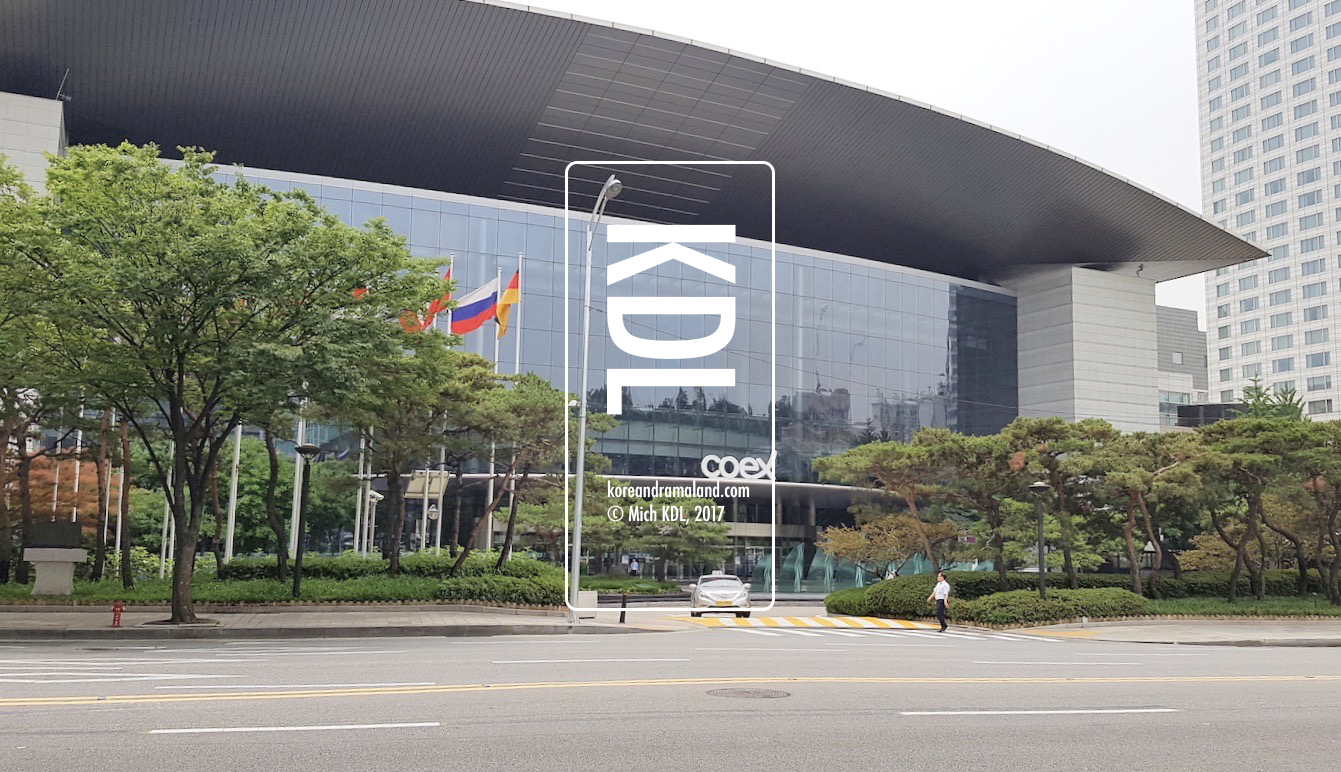 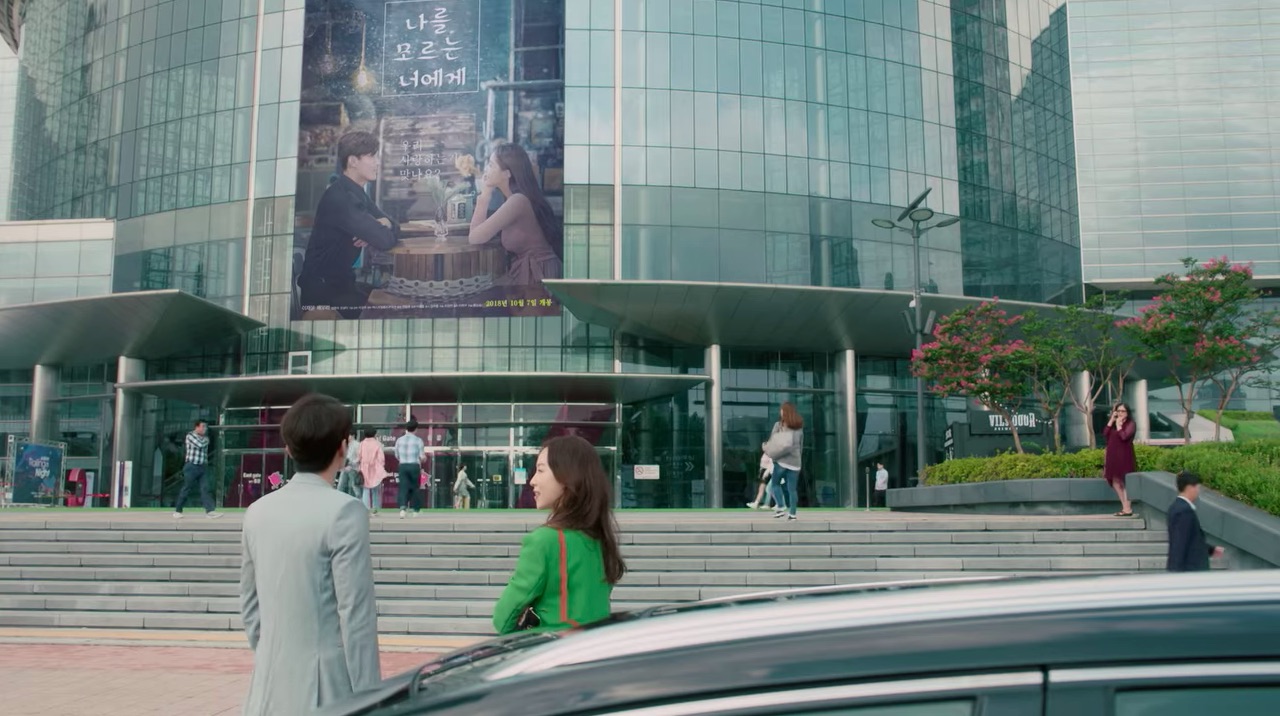 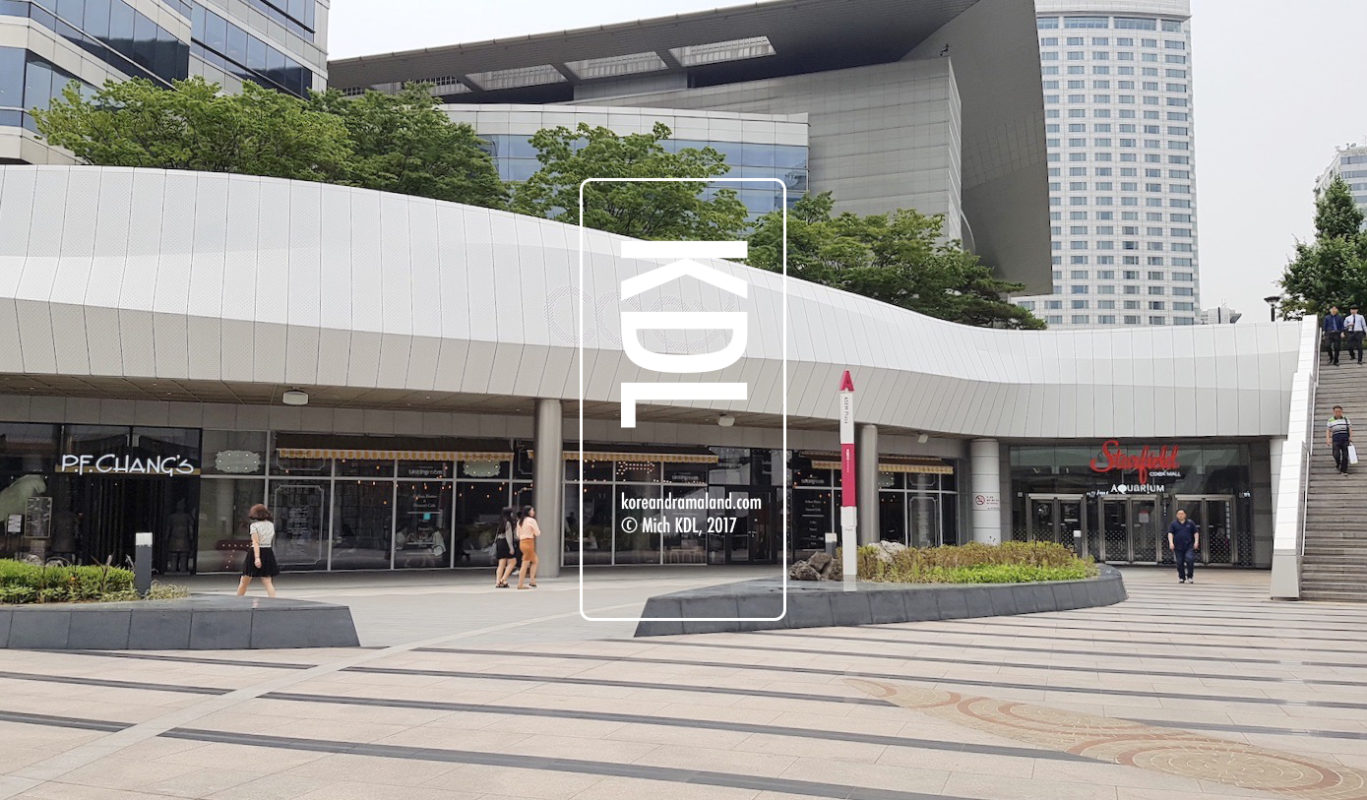 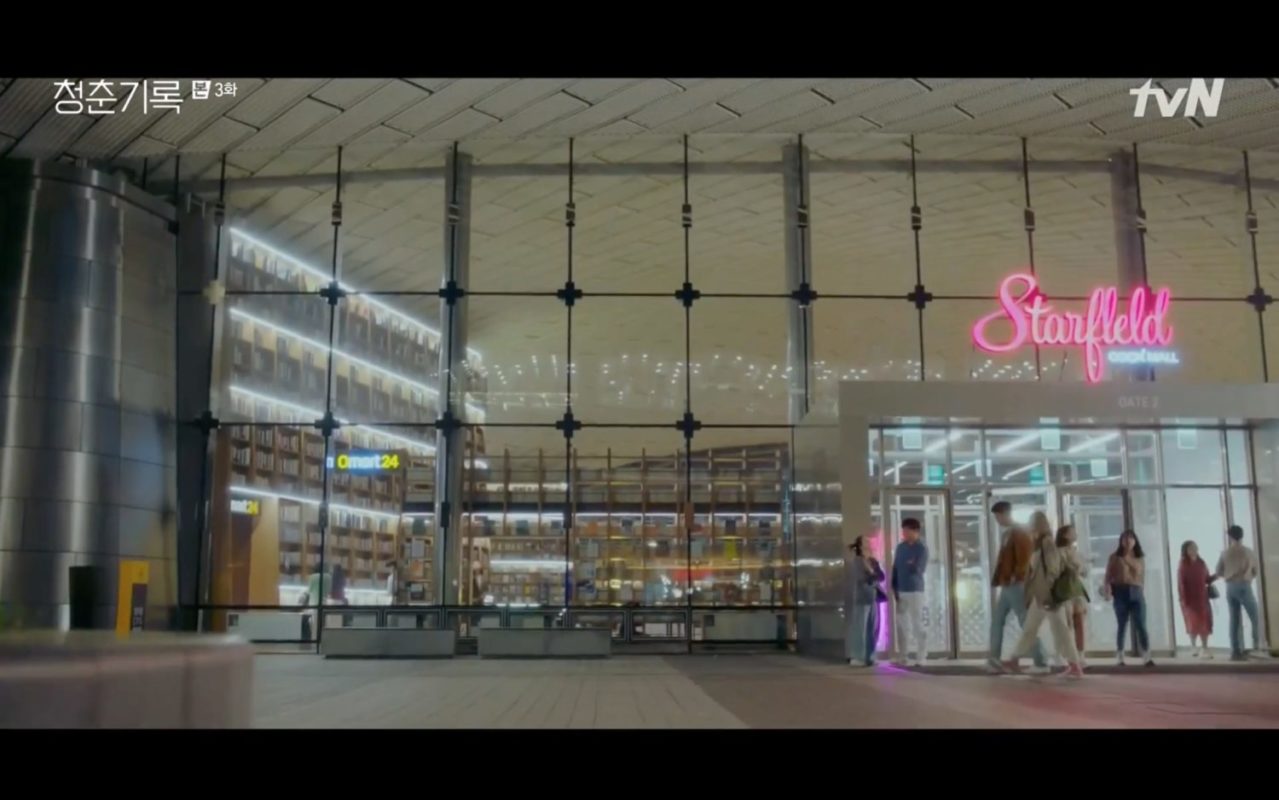 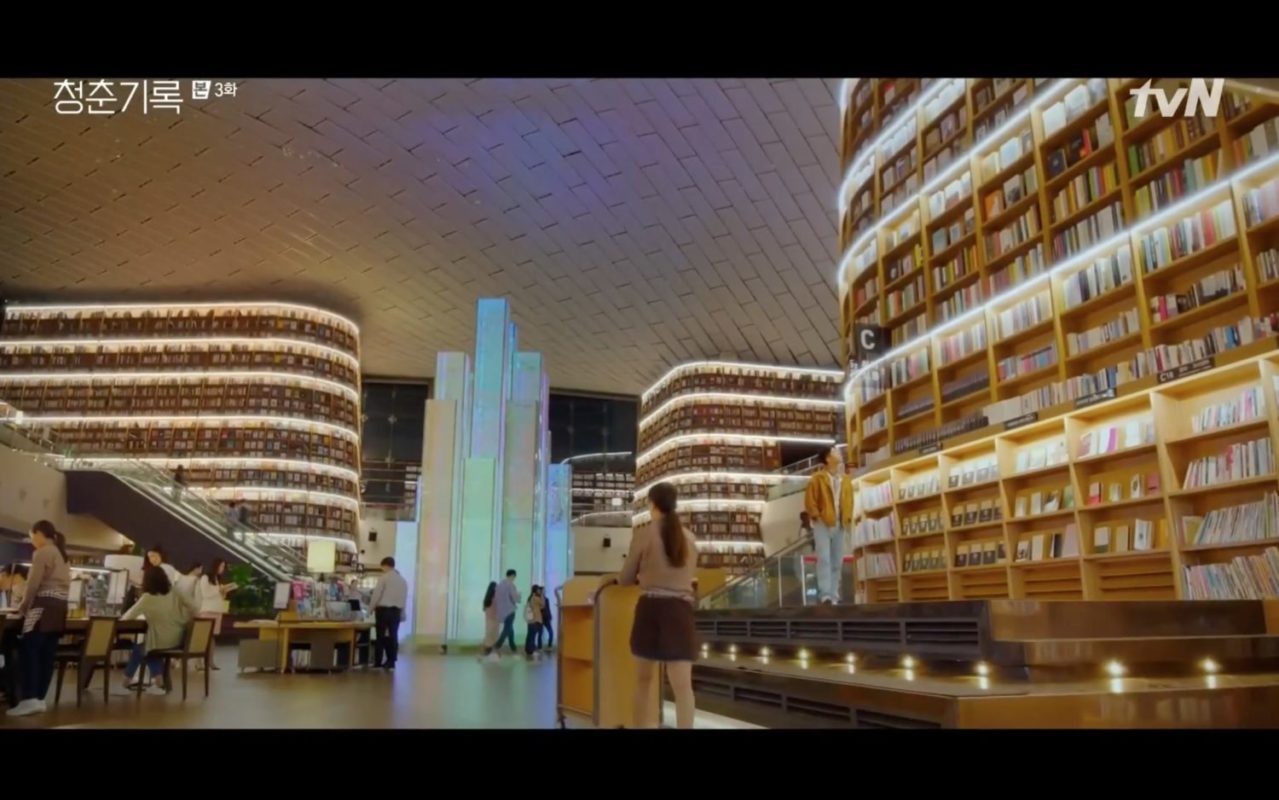 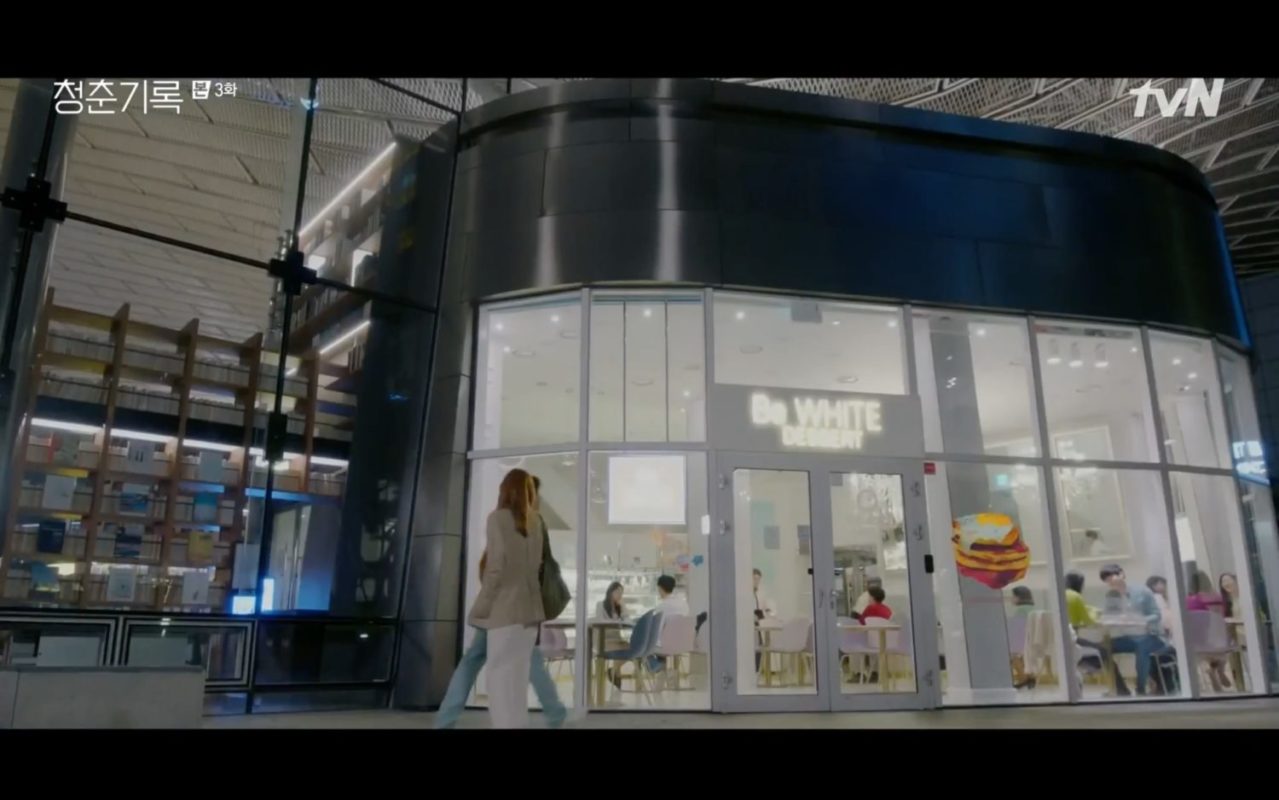 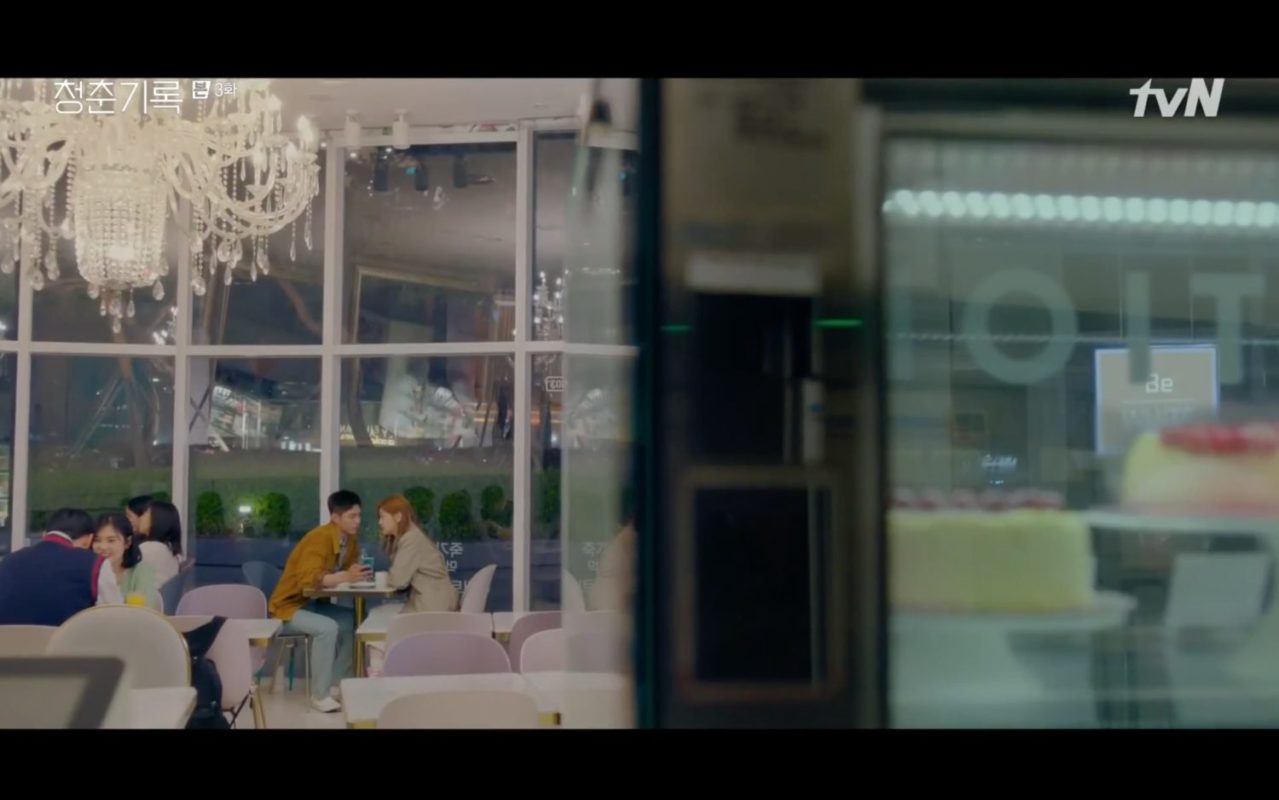 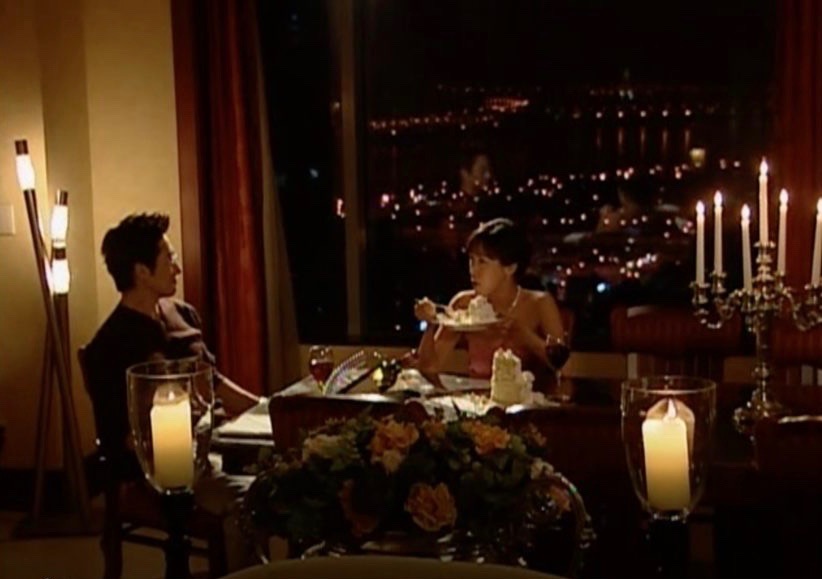 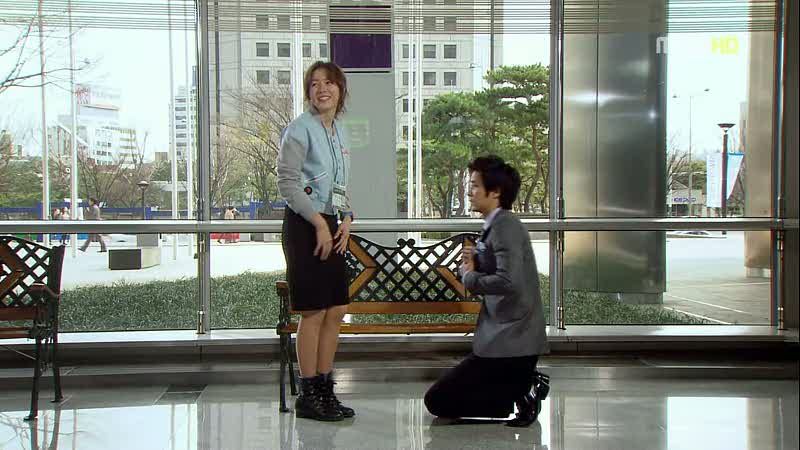 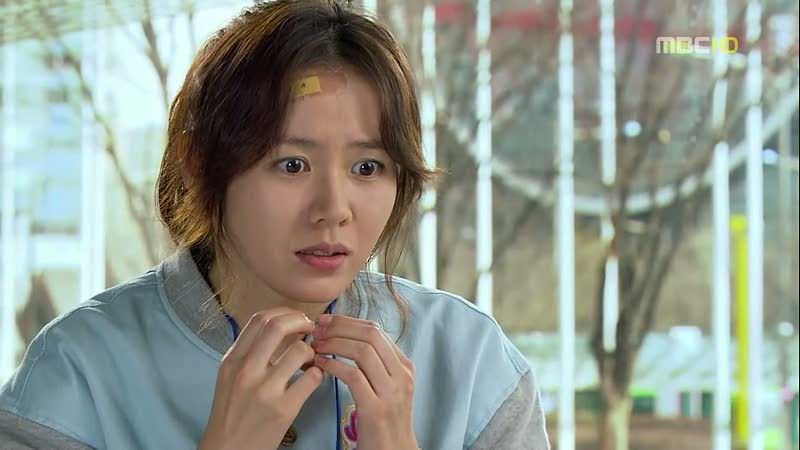 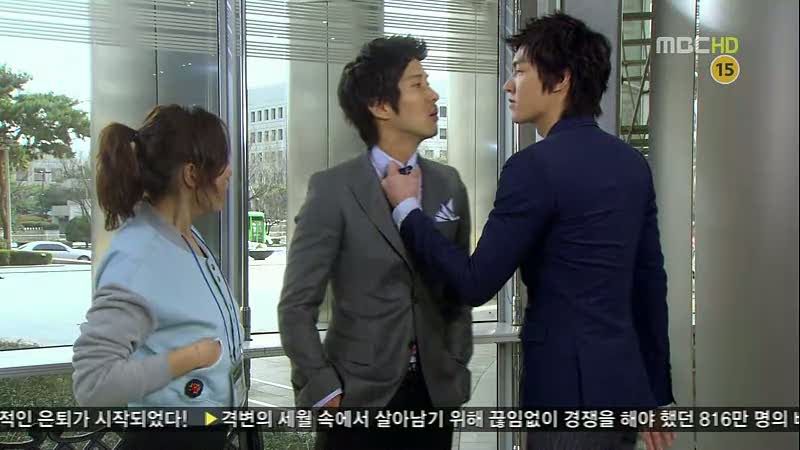 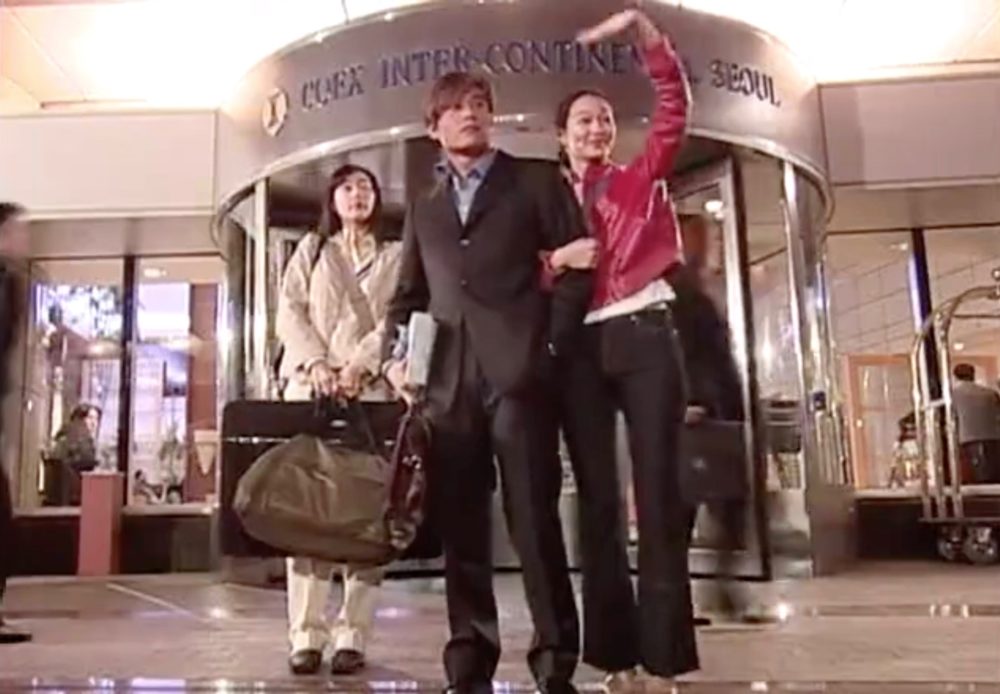 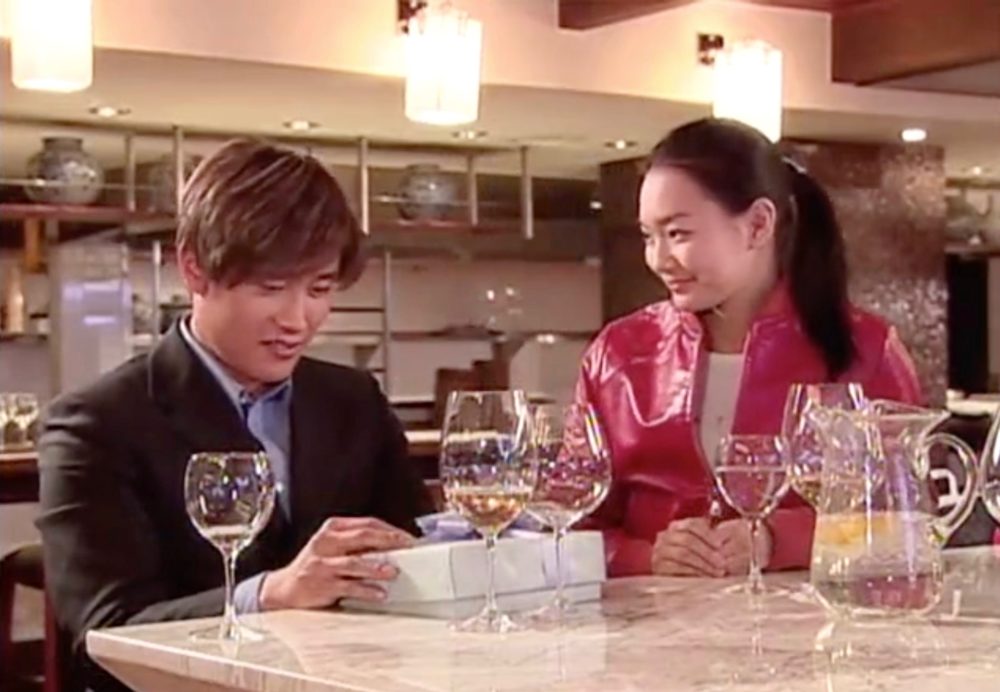 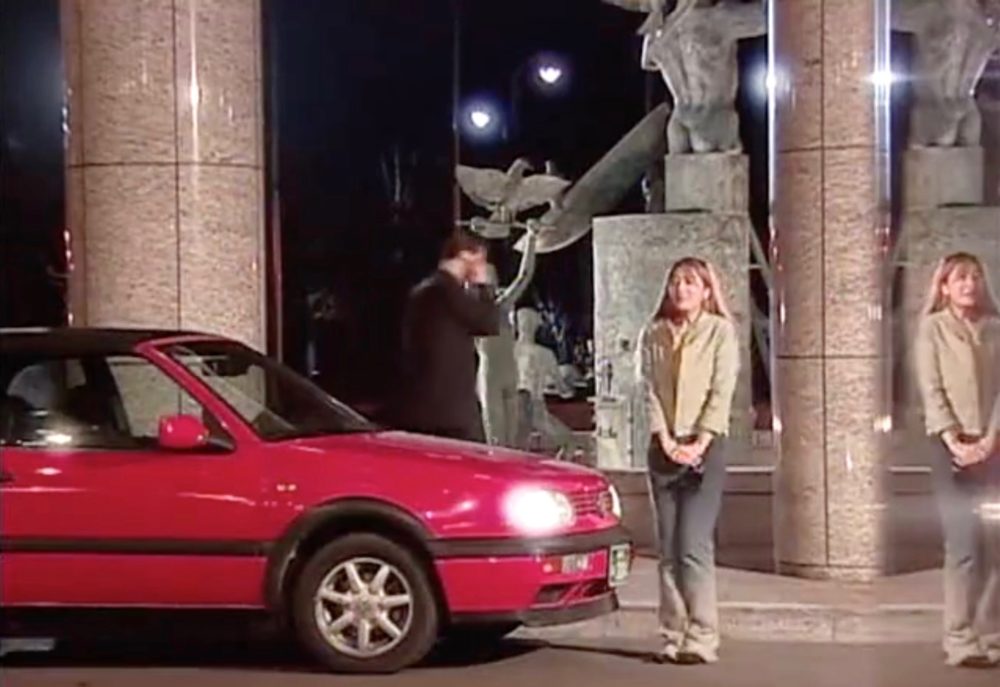 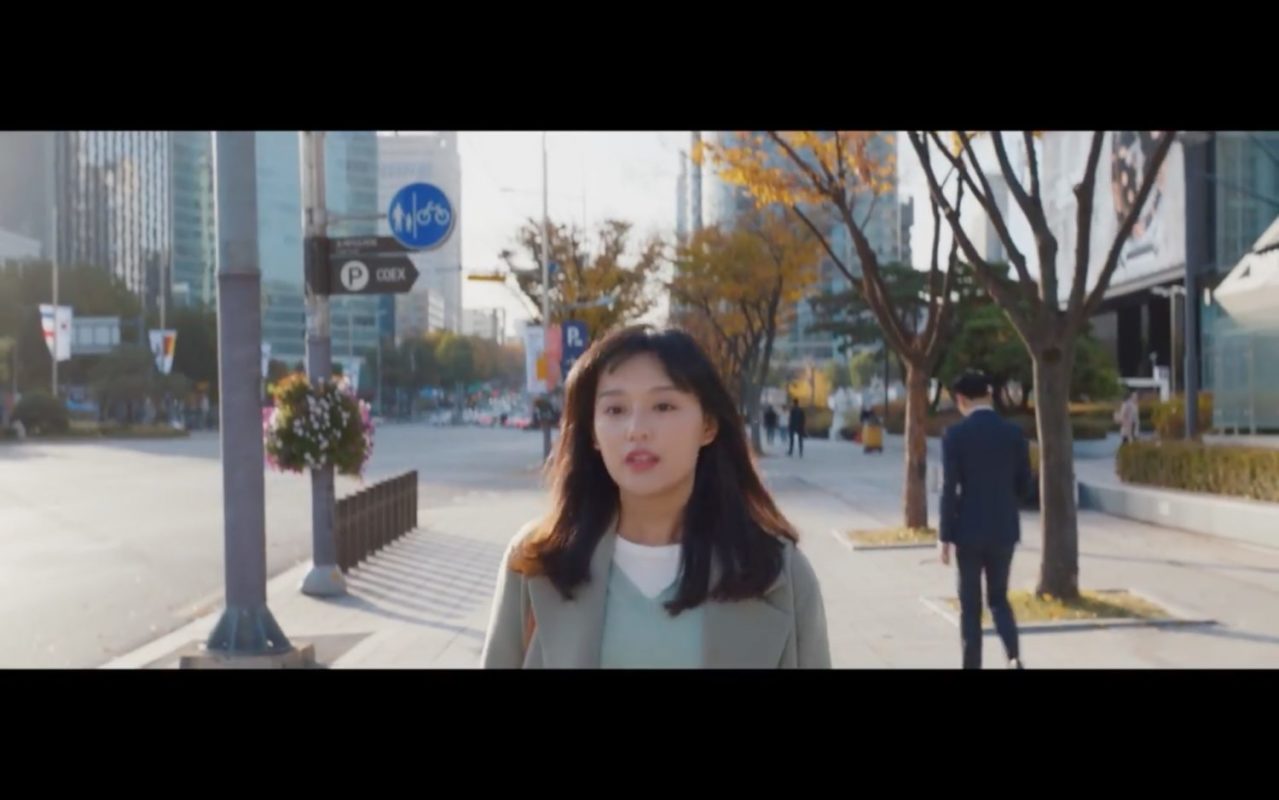 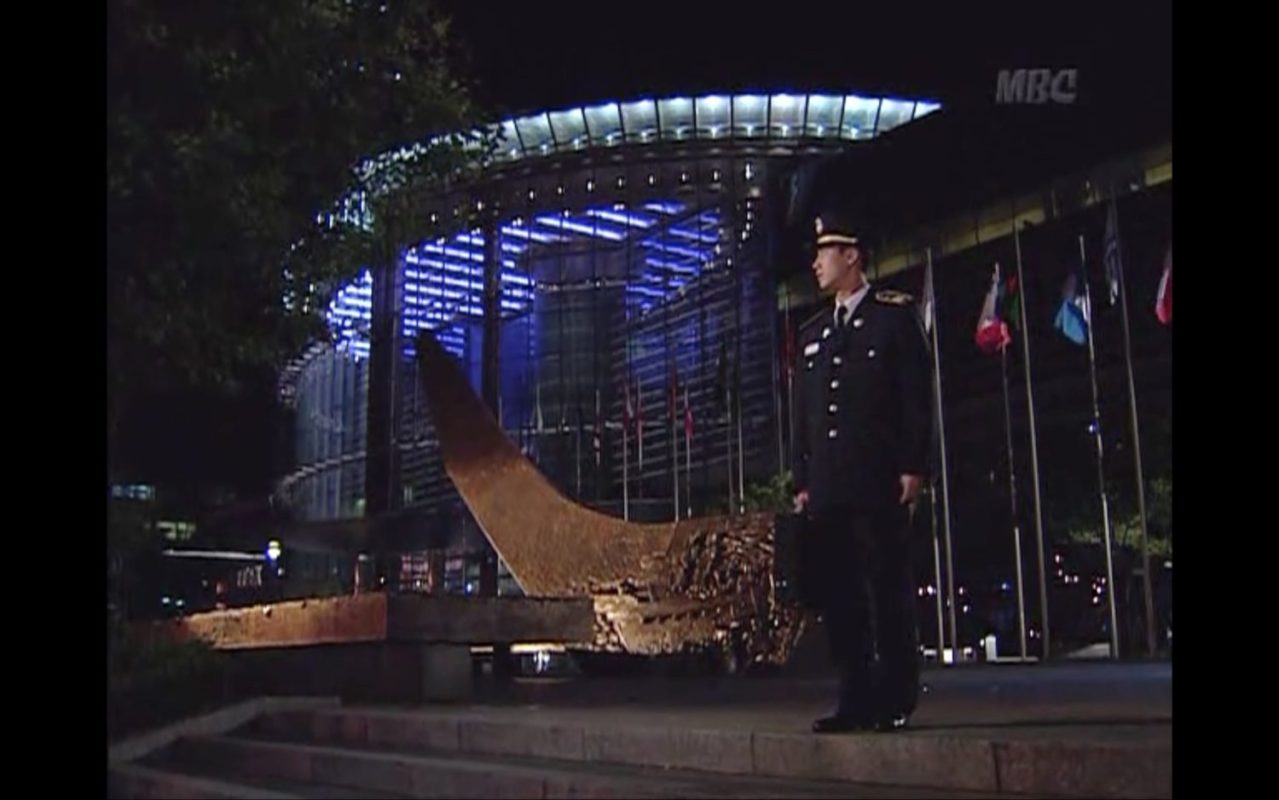 Sa Hye-joon (Park Bo-gum) and An Jeong-ha (Park So-dam) meet at the Starfield Library [별마당 도서관] of this venue in episode 3 of Record of Youth/The Moment/Youth Record (청춘기록) (tvN, 2020) and Hye-joon explains that this is one of the places one of the places he visits when he feels sad and down. Afterwards, both decide to sit down at Billy Angel Cake Company — Samsung COEX Mall Branch [빌리엔젤 삼성코엑스몰점] (appearing as ‘Be WHITE Dessert’) at this mall for a drink (with some slight Secret Garden feels). Hye-joon is back here in episode 7 and also in episode 8 to study for a role.

This mall appears as the convention hall at which Park Gae-in (Son Ye-jin) launches her furniture line ‘Kae-in Story’ at an expo in episode 1 of Personal Taste/Personal Preference (개인의 취향) (MBC, 2010). At the same time, the bidding among architectural firms for a contract to build the ‘Dream Art Center’ takes place at this convention hall, where Jeon Jin-ho (Lee Min-ho) and Han Chang-ryeol (Kim Ji-suk) are each bidders with their firm. When Chang-ryeol and Gae-in meet for up for a moment (SPOILER: he wants to break up and she thinks he will propose), Jin-ho interrupts them when he attacks Chang-ryeol for having used underhand methods to win the bid.

The exterior of this building is seen as the venue at which the ‘2020 61st Trade Day’ of the Korea International Trade Association takes place in episode 2 (full episode 1) of Kkondae Intern/Old School Intern (꼰대인턴) (MBC, 2020) and Ka Yeol-chan (Park Hae-jin), General Manager of Joonsoo Food, receives an award.

The exterior of this building was shown as the place where Han Se-gye (Seo Hyun-jin) and Seo Do-jae (Lee Min-ki) comes to watch a film in episode 4 of The Beauty Inside / Byooti Insaideu (뷰티 인사이드) (JTBC, 2018).

Park Joon-pil (Shin Ha-kyun) and Oh Soon-jung (Han Ji-min) agree to meet up for a date in front of this venue in episode 3 of A Good Person/A Good Man (Joheun Saram/좋은 사람) (MBC, 2003). But he waits in vain for her.

The ‘Penthouse’ of this hotel served as the interior of Han Gi-ju’s (Park Shin-yang) Parisian townhouse in Lovers in Paris (파리의 연인) (SBS, 2004) — as seen, for instance in episode 2.

Lee Min-Chul (Lee Byung-Hun), Kim Yun-Soo (Choi Ji-Woo) and Lee Min-Ji (Shin Min-A) come here to celebrate her first ‘paycheck’ (money that she’s earned by drawing in a mall; organized by Yun-soo) in episode 6 of Beautiful Days (아름다운 날들) (SBS, 2001). As suggested by Yun-soo, Min-ji offers Min-chul pinkish-red underwear — as this is the usual gift children give to her parents bought with their first paycheck.

COEX [코엑스] — a portmanteu of ‘Conventions [and] Exhibitions’ — functions as a convention center with multiple exhibition halls and meeting spaces. It was first opened in 1986 as ‘KOEX Exhibition Center’, and was rebranded as COEX in 1998. COEX is located on Yeongdong-daero [영동대로] in Seoul’s neighborhood Samseong [Samseong-dong/삼성동] in the Gangnam District [Gangnam-gu/강남구].

The complex has 14 facilities and services under its COEX MICE Cluster (CMC), which includes department stores, hotels, a casino and a cinema. Starfield COEX Mall, considered to be the “largest underground mall” in Asia, is especially well known for its beautiful, Instagram-worthy Starfield Library [별마당 도서관]. The library was designed by Junglim Architects & Engineers (대한민국 정림건축 종합건축사사무소).

In 2021, the Ministry of Culture, Sports and Tourism –announced through the Korea Tourism Organization (KTO)– selected COEX as one of the ‘100 Must-Visit Spots in Korea’ for 2021-2022.