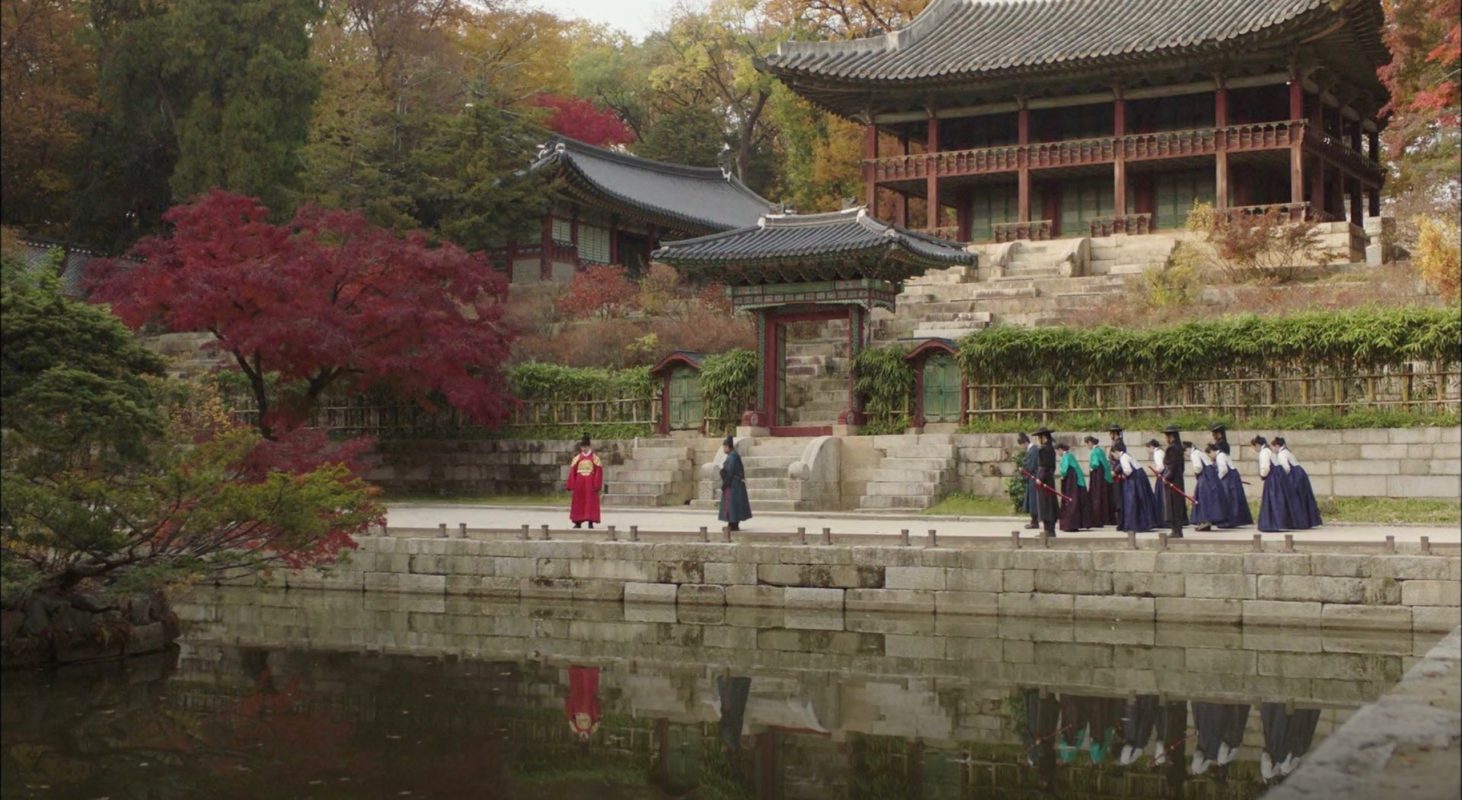 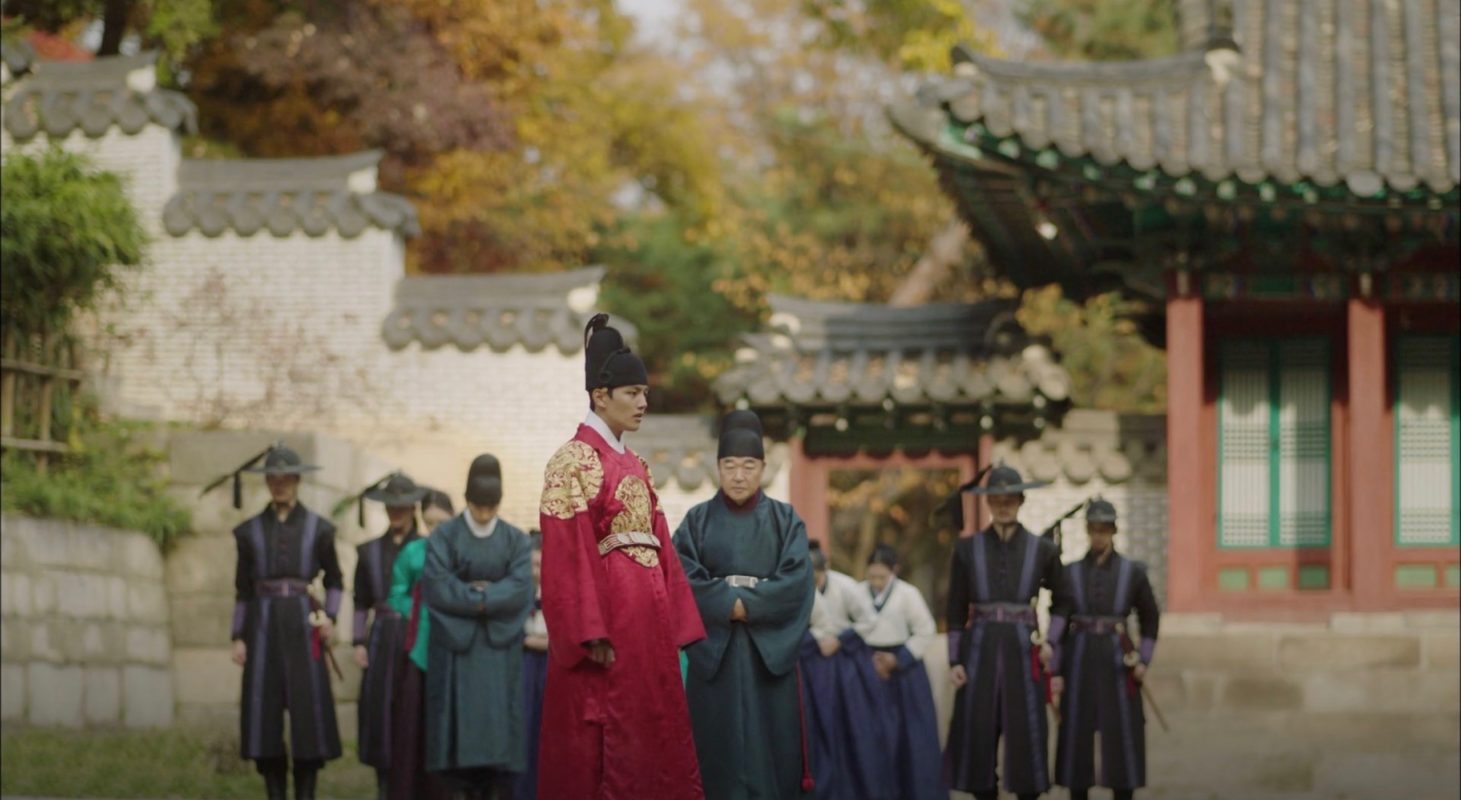 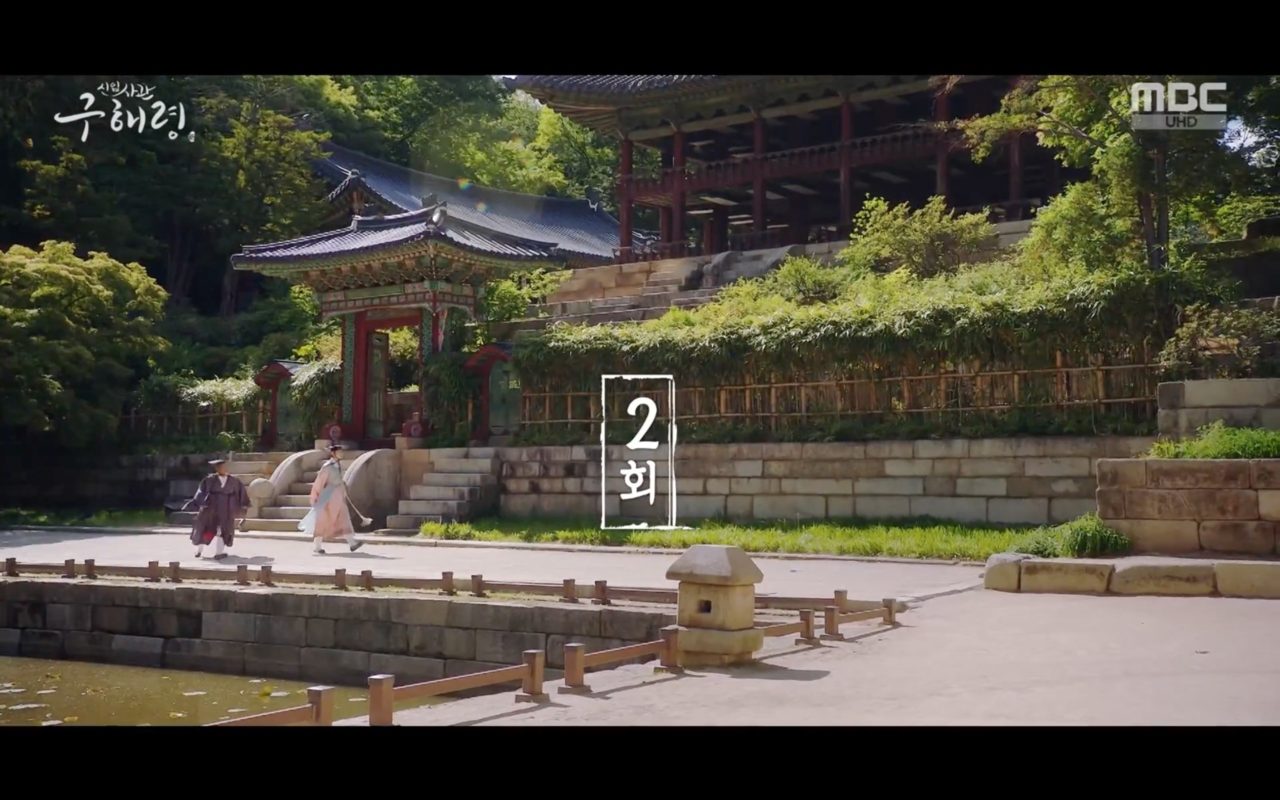 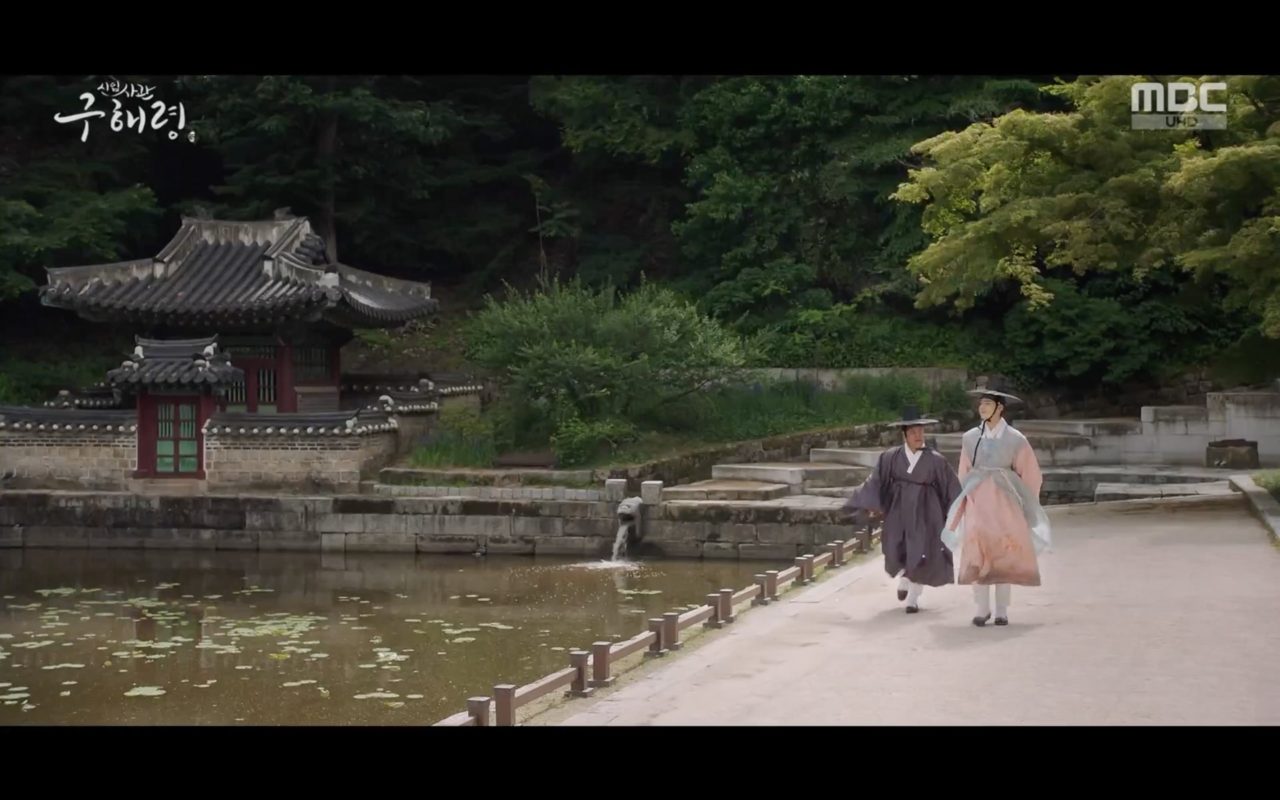 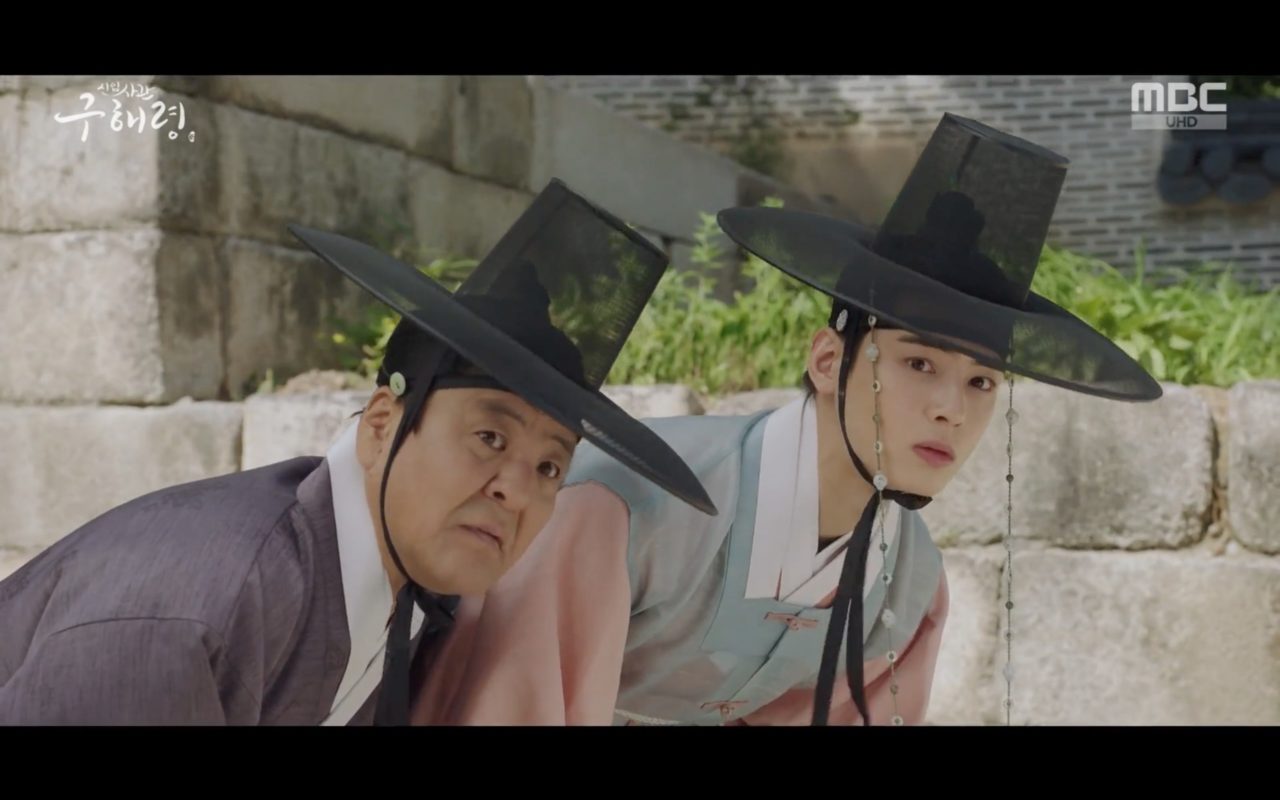 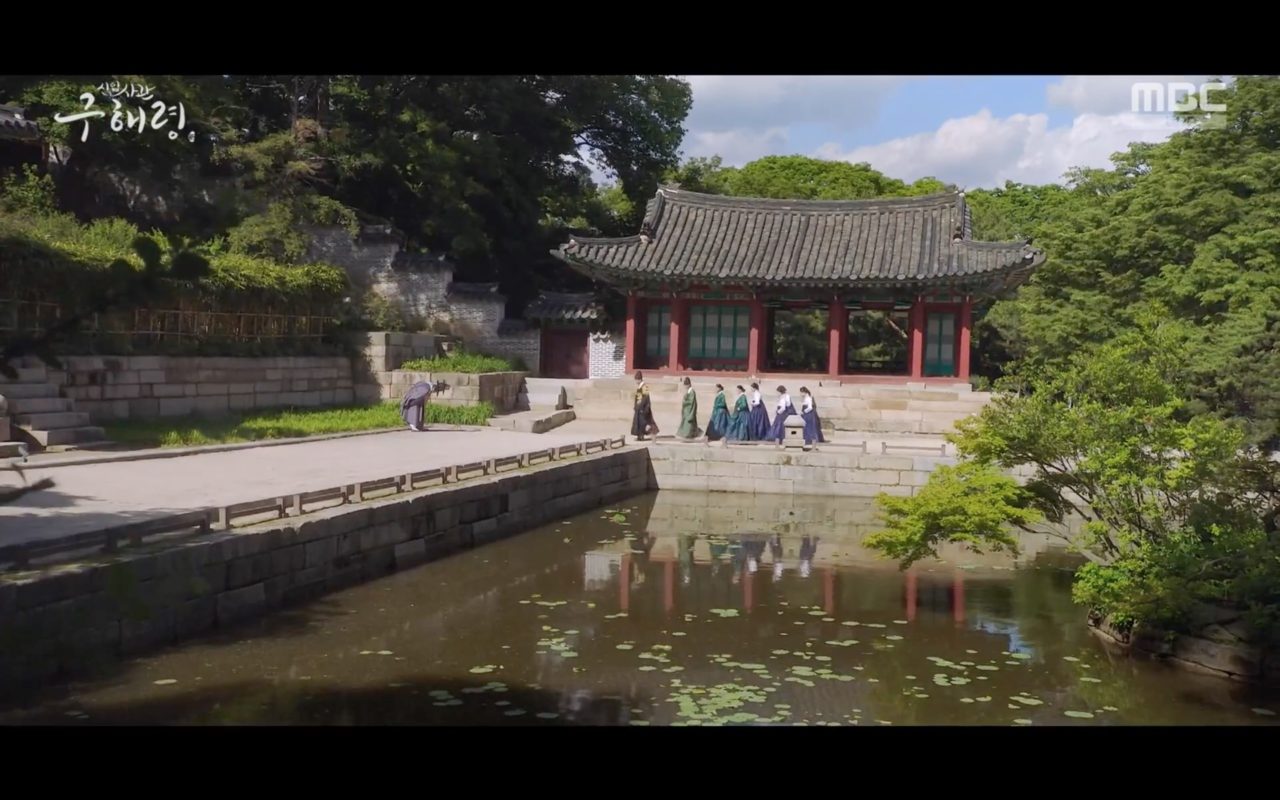 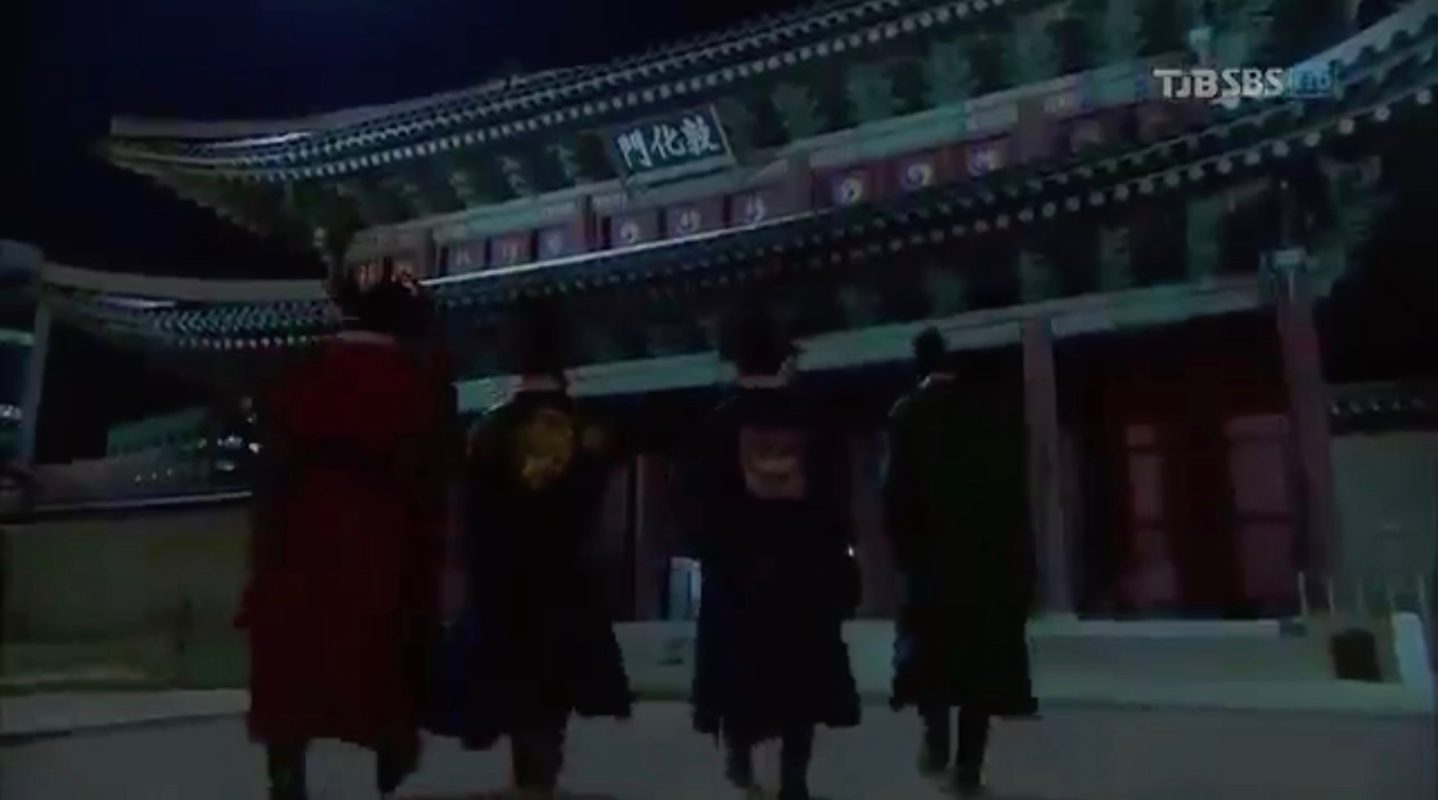 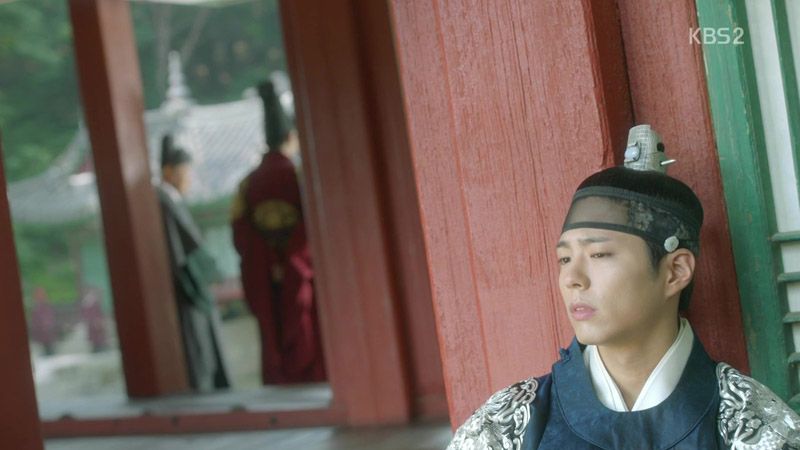 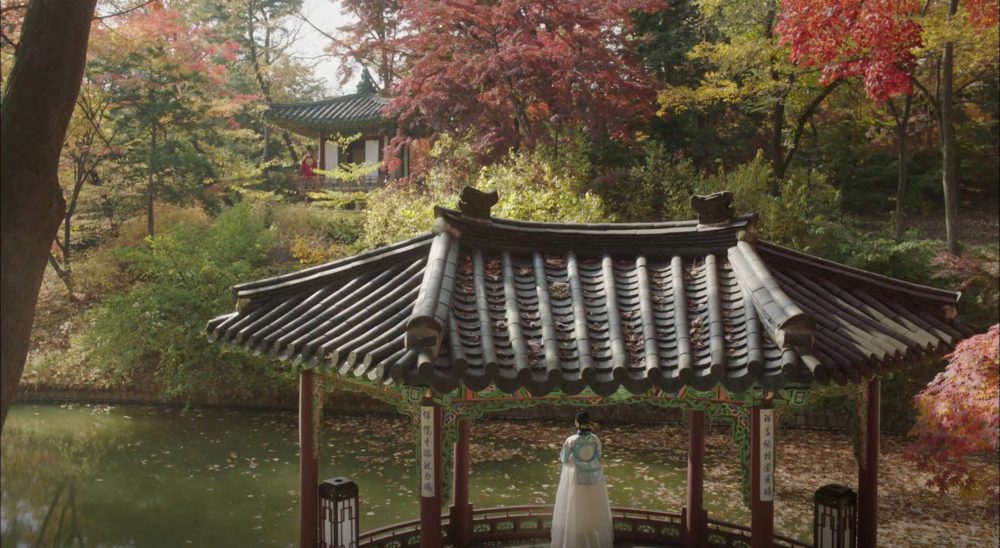 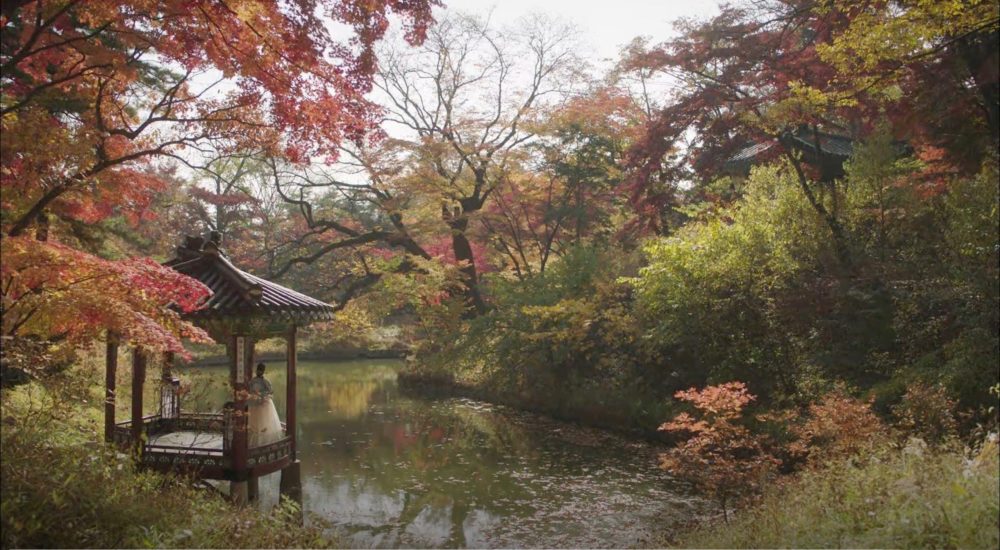 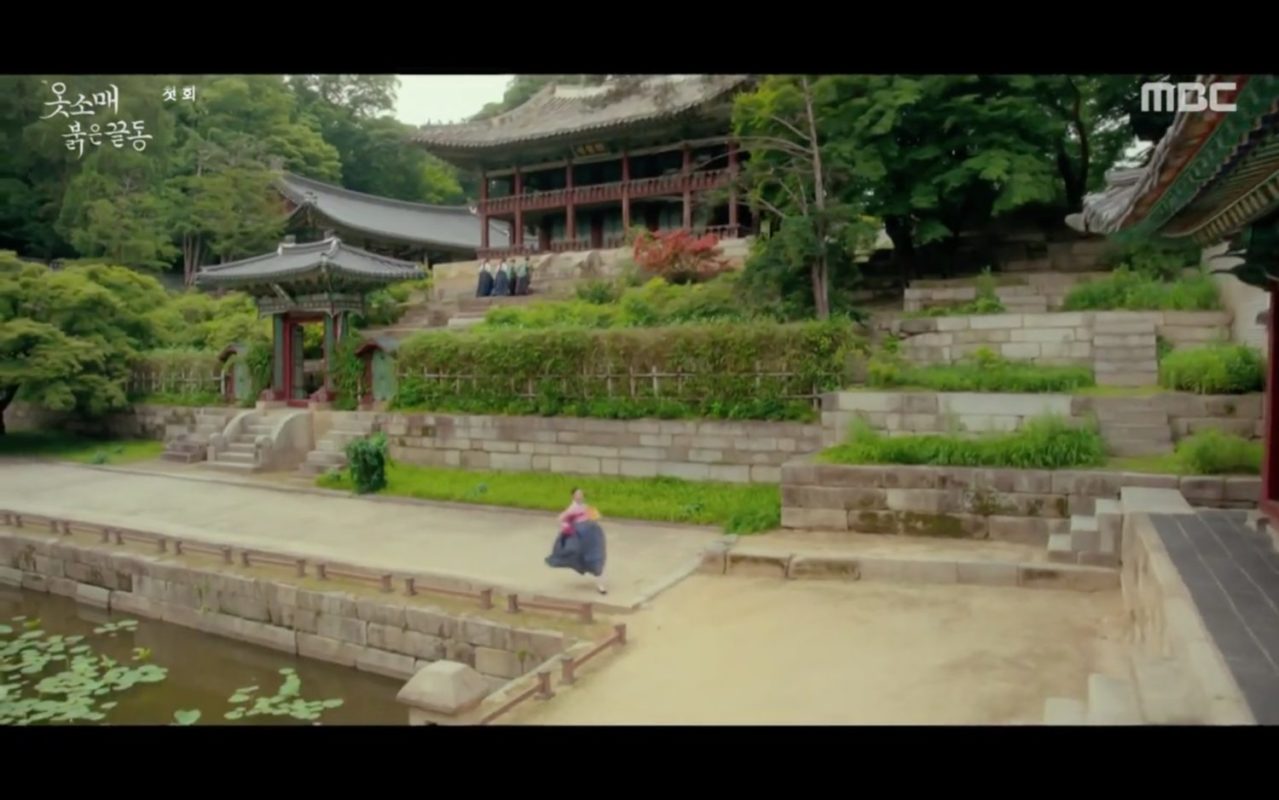 Junhamnu Pavilion —literally meaning the ‘pavilion where every kind of principle of the universe gathers’— is a two-story building overlooking this pond; formerly used similar to today’s libraries

The aging King Yeongjo (Han Suk-kyu) is being accompanied by his grandson Yi San —future King Jeongjo— (Lee Je-hoon) while walking the area of this pond in final part of the final episode 24 of Secret Door (비밀의 문) (SBS, 2014).

When the trio Song Man-bo (Lee Tae-ri), Do Chi-san (Choi Woo-sik) and Woo Yong-sool (Jung Suk-won) as well as Prince Lee Gak arrives in the 21st century and first thought to go towards the palace first in episode 2 of Rooftop Prince/Attic Prince (옥탑방 왕세자) (SBS, 2012), Hong Se-na (Jung Yoo-mi) drops them of at this gate. When demanding to open the door, a police patrol chases them from the gate.

(Side note: there was a theory by K-netizens stating that the fictional Yi Gak was actually King Gyeongjong of Joseon, Jang hee-bin’s son. Hence, Yi Gak going to Changdeokgung Palace makes sense, since in reality the main palace of Gyeongbokgung got burned down in 1592 during the first wave of the Japanese invasions and would not be rebuilt until the 19th century during the regency of King Gojong. For the meantime Changdeokgung Palace served as the main palace for around 300 years — Lr).

The Crown Prince Yi Chang (Ju Ji-hoon), as for him, is seen standing in this pavilion in Kingdom (킹덤/Kingdeom) (Netflix, 2019 — Season 1) and after the ceremonial institution of the Regency, Jo Hak-joo (Ryoo Seung-ryong) and his daughter the Queen-Regent (Kim Hye-jun, still in her robes) have a private conversation in the pavilion regarding power. The pond that is part of this pavilion is also the palace’s disposal area of zombie-infected personnel in Kingdom

The King’s eunuchs were leading Baek Man-geum (Choi Bok-sun’s erstwhile gambler husband played by Lee Moon-sik) for a private audience with King Sukjong (Choi Min-soo) at this pavilion in episode 2 of The Royal Gambler/Jackpot (대박) (SBS, 2016).

This garden appears as parts of the palace in episode 1 of The Red Sleeve/The Red Sleef Cuff (옷소매 붉은 끝동) (MBC, 2021-22). Young (Lee Seol-a) and later adult Sung Deok-im (Lee Se-young) is seen running through it in episode 1.

This garden appears as parts of the palace in Rookie Historian Goo Hae-ryung (신입사관 구해령) (MBC, 2019) and Lee Rim (Cha Eun-woo) —accompanied by Heo Sam-bo (Sung Ji-ru)— crosses this garden when sneaking out of the palace in episode 2 (full episode 1) with the approval of his brother Lee Jin (Park Ki-woong) who appears unexpectedly.

Lee Hun/Ha Sun (Yeo Jin-goo) looks at his reflection and contemplates the Queen at Juhamnu Pavilion, in episode 6 of The Crowned Clown (왕이 된 남자) (tvN, 2019).

It is at the Yeonghwadang Hall [영화당] of this garden that Crown Prince Hyomyeong (Park Bo-gum) overhears a conversation between the King and his head eunuch in episode 2 of Moonlight Drawn by Clouds/Love in the Moonlight (구르미 그린 달빛) (KBS2, 2016).

Then Queen Consort Cho (Kim Hye-jun) climbs the central steps of the Injeongjeon Throne Hall [인정전] in her minor ceremonial robes (소례복) as a Regency (수렴청정) is announced in Kingdom (킹덤/Kingdeom) (Netflix, 2019 — Season 1).

In episode 1 of Jewel in the Palace / Dae Jang Geum (대장금) (MBC, 2003-2004), the procession of King Yeonsangun takes place in front of the Injeongjeon Throne Hall [인정전] and in episode 3, King Jungjong’s (Im Ho) procession takes place here too.

The scene of the restoration ceremony of Queen Inhyeon in Jang Hee-bin (장희빈/Jangheebin) (KBS2, 2002-03) took place at this throne hall.

Originally housing the Kyujanggak Royal Library & Archives (규장각, direct precursor of the modern Kyujanggak Institute for Korean Studies)
Now-adult King Jeongjo walks up the stairs (back turned towards the audience) towards the building in the final episode 24 of Secret Door (비밀의 문) (SBS, 2014).

Changdeokgung Palace [창덕궁/昌德宮] —literally ‘Prospering Virtue Palace’— is one of the palaces of the Joseon Dynasty (1392 – 1910) that still exists in present times, and is also one of the most well-preserved. Built in 1405 by Joseon’s third ruler King Taejong and rebuilt in 1610, it was the main palace for about 270 years and saw through the reign of 13 kings, who lived and discussed state affairs here.

The palace site is divided into two parts: the palace building area, and its royal garden area. The latter “takes up about sixty percent of the palace grounds” and was used by the royal family for leisure. The royal garden area is known under different names, but is usually referred to as Huwon [후원/後苑/Rear Garden] or Biwon [비원/秘院/Secret garden]. The Juhamnu Pavilion (Treasure No.1769) was built as the royal library in 1776 under King Jeonjo, and is located within the palace’s garden.

In 1997, Changdeokgung Palace was designated as a UNESCO World Heritage Site. In 2012, the palace was selected as one of 100 regular filming locations for movies and dramas by the Seoul Metropolitan Government and the Seoul Film Council, and featured in the brochure The Places In Seoul Cinema Fell in Love With (영화가 사랑한 서울 촬영지 100선).