Step aside, Incheon – since our last round-up of Most Frequented Neighbourhoods of 2017 (part 1 /part 2), one other city outside of Seoul has popped up on the K-dramaland location radar.

From café streets to business buildings, the variety and versatility of Seongnam (Gyeonggi-do’s second largest city) has found its way into the backdrops of numerous dramas as of late. On my most recent trip to Korea, I decided to track down some of these locations for myself, which appeared or featured in a few drama favourites over the past year. Seongnam isn’t exactly considered ‘near’ Seoul, but thanks to the Bundang (분당) subway line, travelling to those areas were made a lot easier. (And rather appropriately  too, since we’ve put up our swanky new Search by Subway Station page!)

Ready to hop on for a trip along the Bundang line? If you’re in Seoul, start your journey from Wangsimni (왕심니역) station or any of the other stations along the yellow line (e.g. Seoul Forest, Apgujeong Rodeo, Gangnam-gu Office, etc). I started mine at Seonjeongleung (선정릉역). Alternatively, the red Sinbundang (신분당) line from Gangnam will take you to the middle of the yellow Bundang line. There are some interesting stops on that line too, which I’ll elaborate on later in the post.

Note: for specific instructions on getting to the locations, refer to the respective listings.

Onward to the first stop!

Believe it or not – there’s already a drama location as you step out of exit 3 of Yatap station! That’s where one of Ho-rang and Won-seok’s throwbacks took place in Because This Is My Real Life (이번 생은 처음이라).

While there are two other locations in this vicinity (HOME – House of Memory and Eternity and Yatap-ro – both from Cross (크로스)), my schedule only permitted me to visit one: the I&C Technology building, featured in Jugglers (저글러스). After fervently following the weekly shenanigans of the YB Ad team, and the blossoming romance between Yun-i and Chi-won, it was great to see the building for myself! I could almost imagine that scene in the last episode where both of them stole a moment together outside the entrance.

Pity I didn’t go into the building, but I did take a quick walk to the left of the building and saw the cafe that appeared in Jugglers, through the window.

Tip: You can take a few buses to the I&C Technology building from Yatap station. Specific instructions can be found in the listing.

Four stops after Yatap (or one stop after Pangyo station) is Jeongja. Notable locations in this area are the Dal.komm branch as seen in Descendants of the Sun (태양의 후예) and Goblin (도깨비), Aglio from Radio Romance (라디오 로맨스) – even the 7-11 store in Cheese In The Trap (치즈 인 더 트랩)! The subway station itself has also been featured in the still-airing Something in the Rain (밥 잘 사주는 예쁜 누나). But my main focus in this area was a store seen in one of my favourite dramas of 2017 – the youthful, earnest and heartfelt Strongest Deliveryman (최강 배달꾼).

I headed to Essere Gelato, where Gang-soo and Dan-ah brought their manager, Soon-ae, to in episode 8. Considering that Palpal Guksu’s supposed to be located in the Gangdong district in Seoul, it’s pretty far out (literally) to travel to Seongnam for gelato! But hey – it’s K-Dramaland after all 😉 Everything’s meant to look seamless.

The gelato store was palatable to the eyes – loved its blue and white theme and cozy interior. It also has a garden at its entrance, which makes it really welcoming.

It was hard to choose between many flavours …

But eventually, I chose one 🙂

Tip: If Jeongja is too much of a stretch to get to, you’ll be pleased to know that there are also Essere Gelato branches in Seoul in Myeongdong, Hongdae – and even Gangdong. Also, be sure to try the yuzu flavour when you visit!

Near this station is a quiet, suburban apartment building that’s home to both the Seo siblings in Something In The Rain – LG Twin House.

This was a spontaneous visit for me, as the listing appeared on KDL while I was in the area. Why not, I thought, and so I headed over to the station – and out of it – to find the building, which I did after a 5-7 min walk.

I found the side entrance that the characters pass through in the show, which I did myself, and headed up for a quick look at the interior. I rather liked how open and airy the hallways were, compared to that of other Korean apartments. The openness also made for some interesting symmetry.

And what do you know – I happened to visit during filming day! 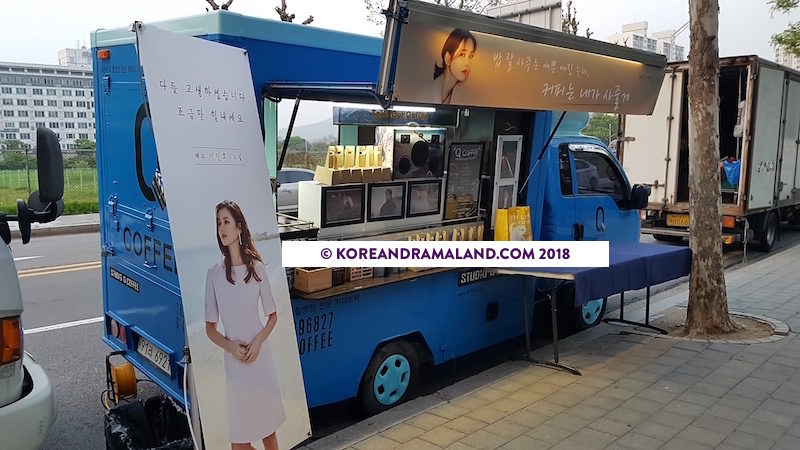 Tip: Remember to not disturb the residents – be sure to keep your voice down if you visit!

Aside from tracking down drama locations, this is also an ideal opportunity for coffee lovers or Instagrammy hipsters to go café hopping! Bojeong-dong Café Street is likely the key attraction in this area, and it has three locations that were featured in A Gentleman’s Dignity (신사의 품격) and – no pun intended (really) – sleeper hit While You Were Sleeping (당신이 잠든 사이에): restaurant Day Spring (now known as Moon’s Wine and Brunch), flower shop La Fleur Dieu, and book café Café Eco’s Library. There are lots of other cafes and shops to explore, so it’s certainly a pleasant way to spend the afternoon!

Tip: This blog offers a very helpful guide to getting to this street from the subway station – it even featured then-Day Spring in their photos! Also, note that La Fleur Dieu is actually a really, really small shop in between Studio 63 and Moon’s Wine and Brunch. Blink and you’ll quite literally miss it – or walk past it, like I did.

This location was more touch and go – all I really wanted to document was exit 3 of this station, where Gang-soo, Dan-ah and the merry men of Strongest Deliveryman gave out flyers to promote the fledgling business. Unlike the morning rush hour bustle in the actual scene, it was pretty quiet when I went to take a look.

You might want to consider spending part of the day around this Sinbundang line station, if you have the chance to step out of it! As mentioned briefly earlier, there’s quite a fair bit to see and do in the area.

Up for a round of shopping? Then head out of exit 1 of this station and you’ll be at Avenue France Pangyo. It frequently appeared in Because This Is My First Life as Ho-rang’s workplace (which is located on Level 2 – Butcher’s Cut).

Another highlight of this area is Baekhyeondong Café Street, which has also appeared in recent K-dramas. A number of scenes in The Great Seducer (위대한 유혹자) were filmed at or around places like La Chinata and Take a Step, while Cuisson and Bonispax appeared in Queen of Mystery 2 (추리의 여왕 2). Café hoppers will certainly have lots to enjoy – and not to mention, be spoilt for choice!

Here are some other locations along the Sinbundang Line that you could also visit:

Il Bianco — Seongbok station (성복역)
A beautiful café that was the backdrop of a fleeting and bittersweet encounter between Soo-a and Do-woo  in On The Way To The Airport (공항가는길).

St. Francisco Cathedral of Pangyo — Pangyo station (판교역)
This towering cathedral was an unlikely place for Nam Se-hee to cross paths with his first love in Because This Is My First Life. You’ll need to take a bus/taxi from the subway station to get here.

As you can see, there are so many places to be discovered in Seongnam! Hope this trip down the Bundang line gave you an alternative travel itinerary for your next visit 🙂 Let us know if there are other locations we should add to this list — we’d love to hear from you!