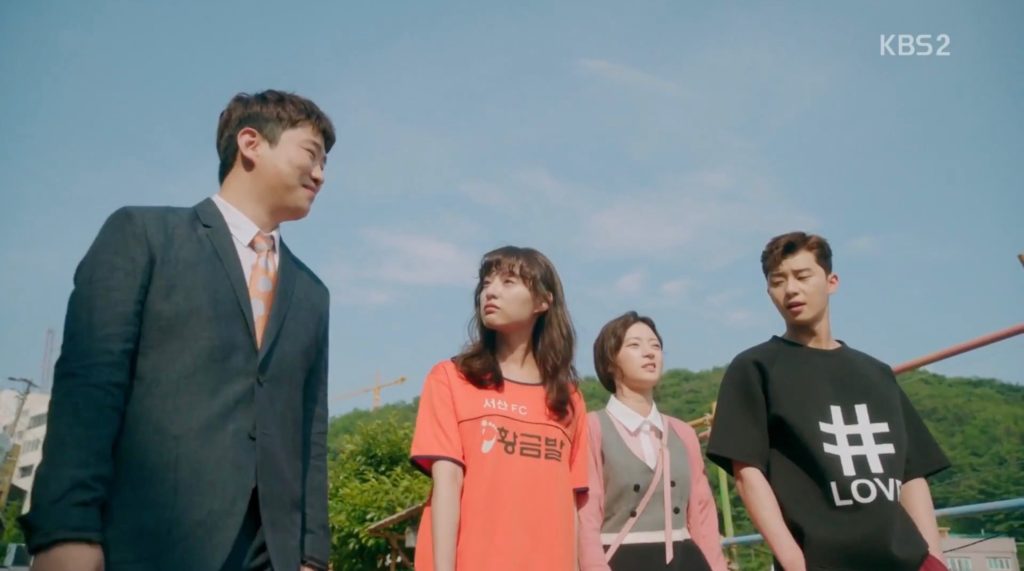 Disclaimer: This blogpost is NOT PERMITTED to be reproduced/reposted on other websites, whether in part or in full, without prior consent or permission from KDL. All screencaps belong to KBS2.

A show’s narrative becomes so very evident when starting from where the scenes play out!

Of course there are the essentials, the places that are important for our fantastic four in Fight For My Way [쌈, 마이웨이] (KBS2, 2017). But there are also places that are important for Choi Ae-ra (Kim Ji-won) and Go Dong-man’s (Park Seo-joon) love to grow, for Baek Seol-hee (Song Ha-yoon) and Kim Joo-man’s (Ahn Jae-hong) love to stay strong. Then, there are places of frustration: frustrations in love, in the job, with your family and in-laws, or caused by one’s social background. There are also a lot of locations and occasions where our fantastic four don’t give up and believe in their dreams even though they might come with hurdles.

Instead of the usual listings, where you can see all filming locations on a map, I wanted to try something new and list all the sites thematically. Let us know what you think of this and, in case you like it, let us know which K-Dramas you’d like to see something similar!

Note: Clicking on the links will take you to more information on each place, descriptions of the scene(s), and directions to get there.

The apartment building, the private rooftop bar, and Dong-man’s gym are all located in Beomcheong-dong, Busan. Other recurring places — especially those that our friends pass by on their way home — like the yellow-blue house, the building with the Superman drawing, and the bus stop are located in Hongdae, Seoul.

Namil Bar where our friends always hang out: A rooftop in Beomcheong-dong, Busan; half an hour away from Namil Villa.

This is a fake bus stop that does not exist in real life. The concrete wall in the background belongs to Humanist.

This is Café Dudart. Our friends pass by it from time to time on their way back or from home.

I like that this drama gives us a lot of insights into how our best friends turn into lovers. We see them falling in love progressively (Who can’t get behind such a storyline?! Squee!), and the following locations are some sort of milestones in this process — and also its evidence of sorts.

We meet both of them as bickering adults that support each other no matter what. Their complexity transcends the screen right from the start — in everyday scenes like this one when they cross an overhead bridge in episode 1.

Going back to early childhood, we see Ae-ra and Dong-man playing together at Orangdae Shrine in Gijang-eup in episode 2; with Ae-ra as a leader, both of them interchanging traditional gender roles.

Just the day before Dong-man enlists into the military, Ae-ra goes to his former house in Seonghyeong-dong, Seoul; just to hear/see Dong-man kiss Park Hye-ran (Lee Elijah) — in episode 8. This is also when we learn that Dong-man is Ae-ra’s first love.

“This is a fort.” Dong-man says as Ae-ra’s protector at the rooftop of Seoul Metropolitan Library [서울도서관] in episode 2. The rooftop is supposed to be the one at Ae-ra’s workplace Shinsegae Department Store — Main Branch [신세계백화점 본점].

And another one at Ilgwang Beach [일광해수욕장], right in front of the cafe.

Our second couple, Joo-man and Seol-hee, have been dating for 6 years but not married, even though marriage is always a topic of conversation. The opposing in-laws and new team member Jang Ye-jin (Pyo Ye-jin) put their love, as well as their differing values, considerably to the test. Joo-man wants to offer Seol-hee a good life but is unnerved by her frugal habits; habits she has from putting him through college.

Another problem in their relationship is that Seol-hee is not accepted by her in-laws. They want somebody more “adapted” for career-man Joo-man. The situation at her in-laws’ birthday party at Miss Yoon In Wonderland [이상한 나라의 미쓰윤] in episode 6 speaks volumes. This problem is partly resolved as her ex-mother-in-law understands Seol-hee’s values after their break-up and tries to reconcile with her — which happens at the local bus stop.

All of this makes them argue. A whole lot. Like here in front of The Yellow in episode 10. He’s for expensive food, clothes etc, while she is content with eating an ice-cream on the way back home.

Or in a flashback –– this time over a lobster at The Healing Table [더힐링테이플] in episode 15.

A step toward re-conciliation between this couple is when Joo-man finally draws a clear line and tells his co-worker that he is just not into her. This restaurant was also seen on other occasions, but this situation was most important for Joo-man and Seol-hee to start over again.

Another step for this couple to be get together again in a healthy way after their break-up is that Seol-hee became independent, both job-wise and relationship-wise. It’s like she metaphorically crossed a bridge of self-development; something that was foreshadowed when she was introduced in episode 1 as she proudly crossed Yeouido Saetgang Pedestrian Bridge [샛강다리].

Park Moo-bin (Choi Woo-sik), Dong-man’s nerdy classmate from high school, forces himself on Ae-ra because he is jealous of Dong-man. Ae-ra finally gives in and starts to date him. Their relationship is doomed from the outset as it is eventually discovered that Moo-bin is already engaged. On top of this, Ae-ra simply can’t be herself when with Moo-bin. Pairs of ill-fitting shoes offered by Moo-bin on two occasions are a representation of this incompatible relationship.
Over the episodes, there are several occasions where we see that both of them are not made to be — but, in revenge, them dating makes Dong-man jealous (and this is a good thing).

Ae-ra goes to an event at Novotel Ambassador Seoul Gangnam [노보텔앰배서더호텔 강남점] in episode 7 while suffering in her too small “princess shoes”. This was to surprise new boyfriend Moo-bin, but she ends up being surprised herself when finds out that he is already engaged to someone else –– a Japanese girl, in fact.

Moo-bin works at Catholic Kwandong University International St. Mary’s Hospital — CKU [국제성모병원]. He brings Ae-ra here when she feels unwell in episode 7 and kisses her without consent while paying her a visit in episode 7. With Dong-man as an outraged witness — a real knight to save his princess.

In episode 8, Moo-bin brings Ae-ra to Megabox Drive M [메가박스 용인점(드라이브M)] cinema. She hates these kind of places. In the meantime, Dong-man — who finds out Moo-bin’s true identity — frantically comes here to look for her.

A flashback shows our four friends walking through Wausan-ro 22-gil [와우산로22길] in episode 4 and annoying ex-girlfriend Hye-Ran clings onto Dong-man which, in turn, unnerves Ae-ra.

This drama is in part about making crucial decisions. Should you stay in your unchallenging day job with a tyrant as a boss, or follow your dream job and maybe fail at it? Stay in an already proven relationship or go for a new one? Choose a job with social credentials, or go for a similar job that you prefer but with less social acceptance? Making these decisions often means fighting for and staying true to one’s convictions. 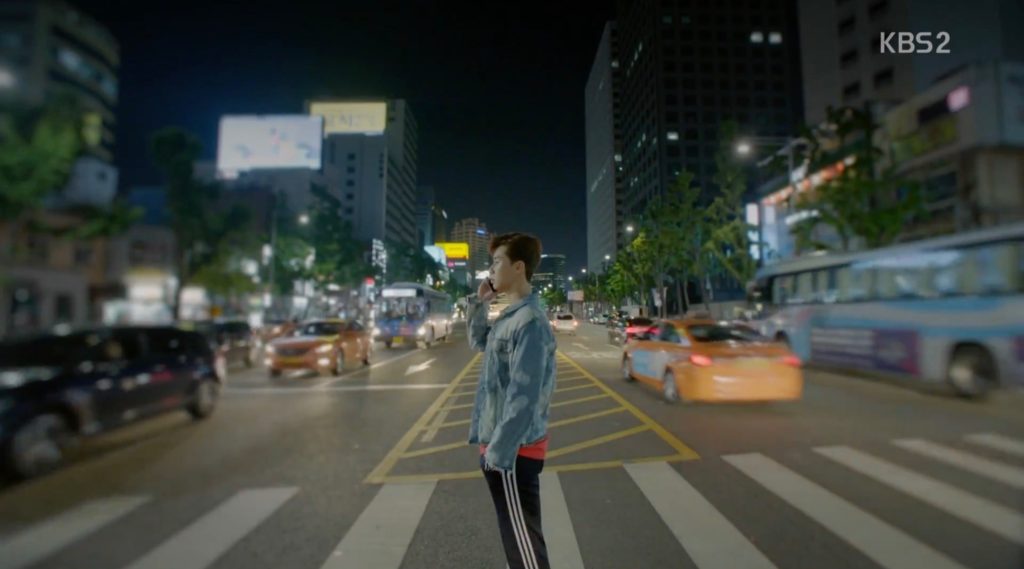 Dong-man quits his job in the middle of Crossroad City Hall Intersection [시청교차로] in episode 4. It is nice how they used a crossroad as a symbol of this decision.

Episode 2: letting frustrations out on a punching bag machine at Woori Stationery [우리문구사]

When we first meet Ae-ra, we see her working at Shinsegae Department Store — Main Branch [신세계백화점 본점]; not her dream job. At all. She dreams of becoming an announcer.

Dong-man is called over to KBS Broadcasting Station [여의도KBS홀] (which appears here as KBC Broadcasting Station) by a friend as substitute in a TV show in episode 2. He ends up failing miserably while his high school rival, Moo-bin does everything right. Later, Ae-ra has a job interview here. While her fellow applicants had all studied abroad and could otherwise work on building their credentials because they were financially supported by their parents, Ae-ra, on the contrary, had to focus on earning a living.

An old classmate looks down on Ae-ra’s social background, even as she’s invited to attend her wedding reception at Villa de Bailey [빌라드베일리] in episode 2.

Eventually, Ae-ra’s event hosting skills come in handy for the same classmate, who asks Ae-ra to stand-in for the wedding host that didn’t show up at Luka 511 [루카511]. A beautiful dress, a job done perfectly: Ae-ra is in her element. Clearly, this makes her dream again.

And again, Ae-ra is caught up by her social background at the afterparty of the wedding that takes place at A.Y Lounge Bar [에이와이 라운지] in episode 2. Three arrogant rich male invitees bet money on who would take Ae-ra home. She finds out about it and takes revenge by breaking the side-view mirrors of each of their cars — with Dong-man, of course, backing her up.

Again, Ae-ra puts her announcer skills to the test at a local event at Ilgwang Beach [일광해수욕장].

Dong-man gave up his dream to become a fighter 10 years ago and as a result, also became frustrated and distanced from his father. In episode 12, his father comes to visit and Dong-man picks him up at Bus Stop Yongsan Technical High School [용산공고]. This is a changing point in their relationship as his father encourages him to (literally) fight for a living. And, of course, Dong-man wins with Ae-ra standing by his side while she hosts the live event.

Done right, K-Dramas have their own way of perfectly reflecting everyday life’s joys and struggles. Fight For My Way is such a little gem and will be for sure one of my favorite 2017 K-Dramas.

Also, I’ve become curious about some of the locations. The Hongdae locations are definitely on my list for my next visit to Seoul. And who knows? Maybe I’ll make it to Busan one day to visit Namil Villa.
How about you? Leave me a comment with your thoughts!