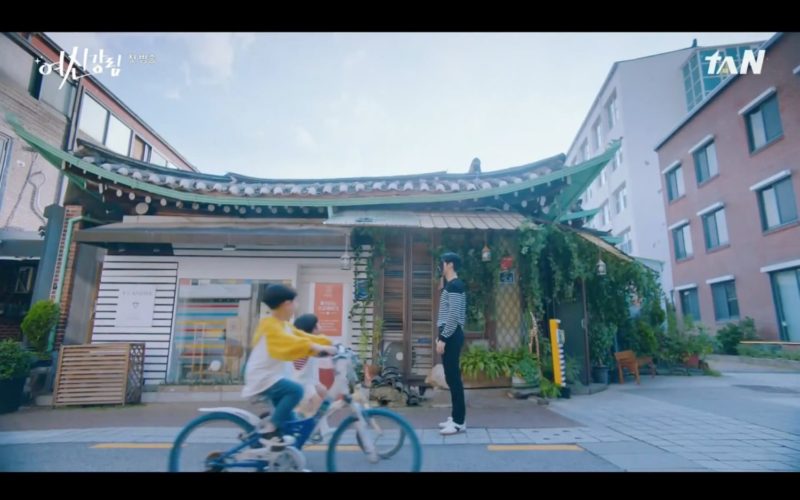 Welcome to our second KDL Roundup: Neighborhoods of the Year! This is where we highlight the K-Dramaland neighborhoods that truly shined on our screens in 2020. And if lists from past years are anything to go by (2019, 2018, 2017 – 1, 2), then you can be absolutely certain that there’s been a shift in this year’s list.

Thanks (or no thanks) to the ongoing global health situation, we’ve also observed some interesting K-Drama location trends in 2020. For one, there seems to have been a more concerted effort in creating cohesive neighborhoods for their respective ‘worlds’; this means that there is a certain authenticity in the proximity of certain key locations, and how close they are to each other. We also love how there appears to be an interest in surfacing the stories of these neighborhoods, and presenting them true to real life, or as close to it as possible (a la More Than Friends).

We’re hope you’re just as curious (or excited) as we are to see how our Neighborhoods list has changed, and to discover the new ‘hoods that made waves this year. If you’re ready, dive straight into it below!

Note: Numbers in brackets at the end of each header denotes the number of sites in this neighborhood that have appeared in K-Dramaland this year! 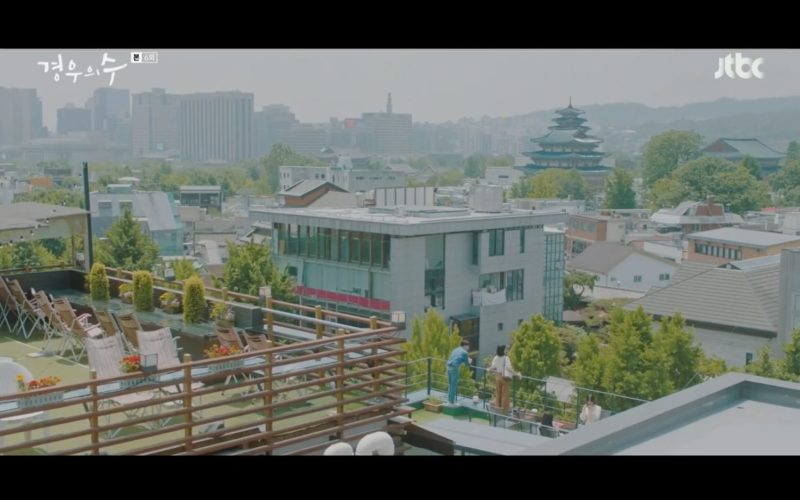 Climbing to the top of our list this year is our favorite hanok village and its surrounding craft and boutique shop-filled streets. Just when we thought that we’ve seen all that Samcheong & Bukchon Hanok Village has to offer, it continues to surprise us with new alleyways, rooftop cafes, and shops. It was also lovely to spot some familiar places returning to our screens (like Jinsun Book Cafe, Yun Po-sun’s House, and Pastel de nata), and even seeing some locations enjoy a ‘second life’ in a different production (namely, Baek Hee-sung’s metalcraft shop in Flower of Evil). We’re sure there are many more location surprises to come from this neighborhood in 2021, and we can’t wait to uncover them.
— Mich KDL 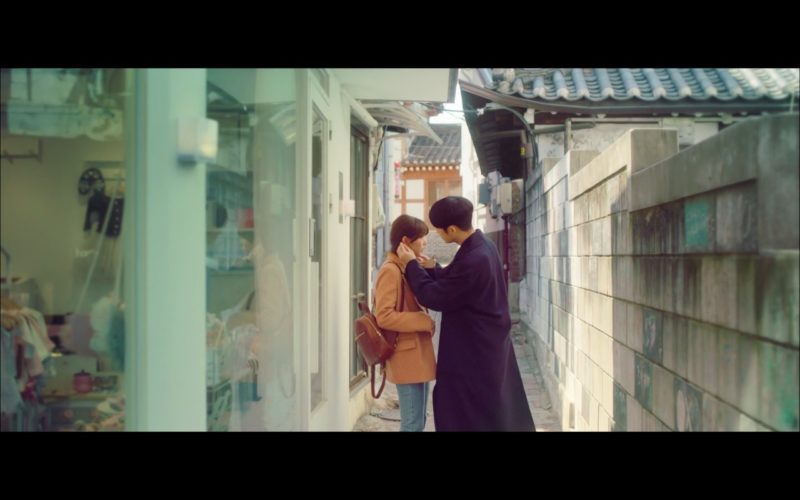 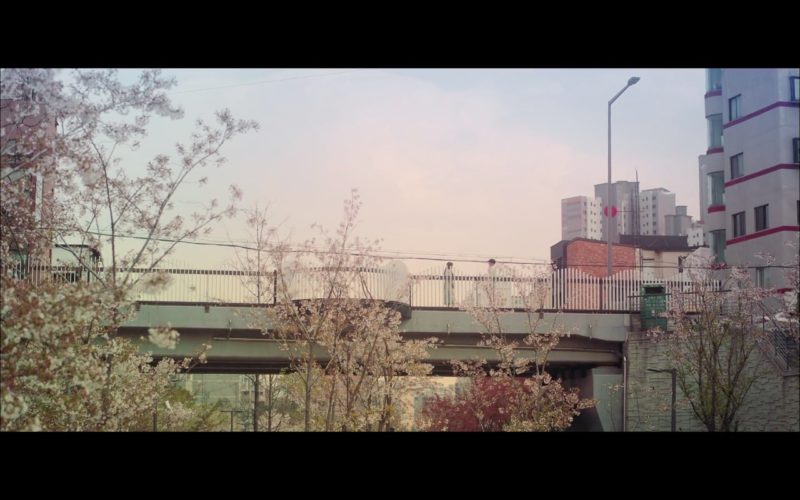 When Seogyo next appears on our screens, it’s pretty safe to say that the first expression that would come to mind is banbogi — something we learnt through our beloved A Piece of Your Mind. In fact, it does seem like people in K-Dramaland constantly meet halfway in this neighborhood: be it at café staples like Green Cloud Coffee Shop, colline, Milky Way Café, and Pattern Ethiopia; or its pedestrian streets like Eoulmadang Street and Gyeongui Line Forest Park. This year, Seogyo’s most well-known café, The 1st Shop of Coffee Prince, returned to the spotlight when cast members Gong Yoo and Yoon Eun-hye (Choi Han-gyul and Go Eun-chan respectively) visited the cafe after 13 years for a much-anticipated reunion.
— Marion & Mich KDL 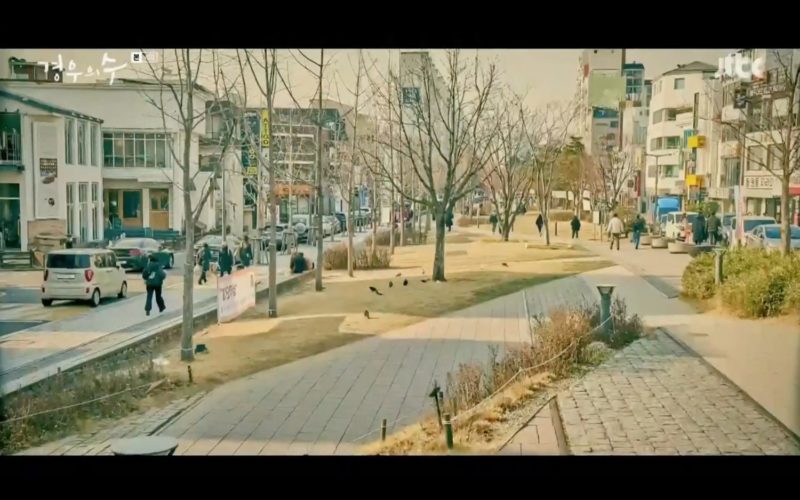 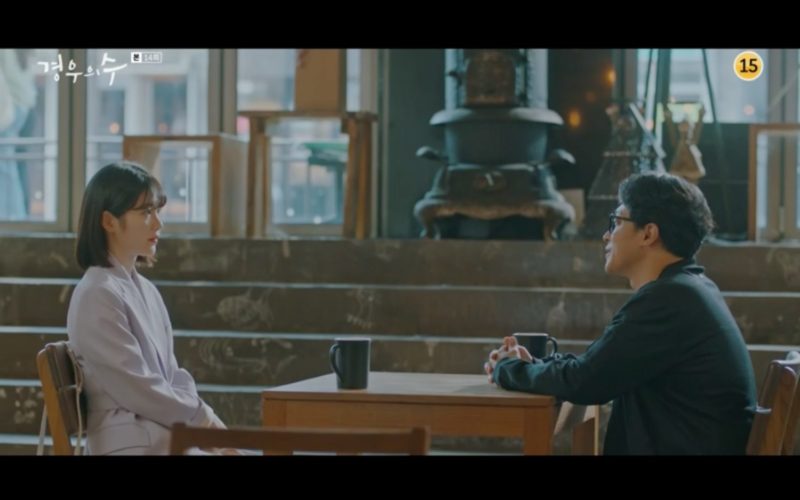 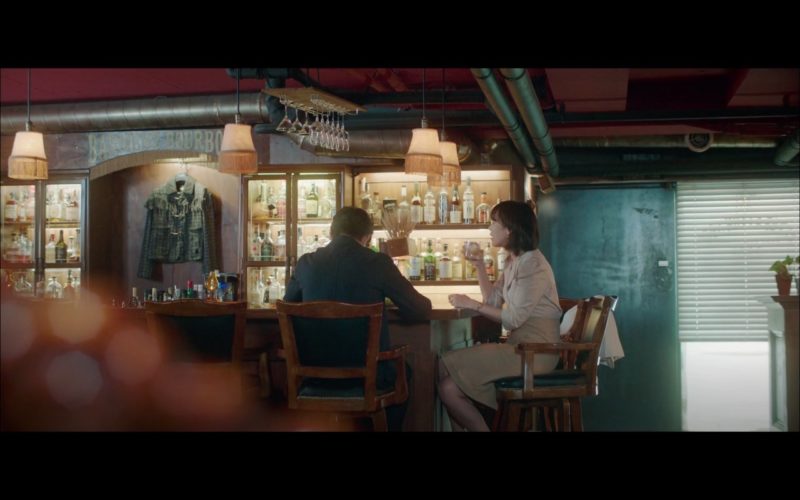 Wonhyo Bridge, where art thou? I think if I missed any place in Yeouido this year, it was clearly my second favorite Hangang Bridge. Yes, there were glimpses of it, but nothing compared to its importance over the past years. That said, there were other K-Dramaland classics that graced our screens; in fact, plenty of them: from the two K-Drama restaurants, to two of K-Dramaland’s more frequented public parks, and even this year’s top listed hotel. With this year’s discoveries –the new Parc.1 complex and private social club Seoul City Club— we have two more locations that will certainly strengthen this neighborhood’s presence on our K-Drama screens in the years to come.
— Marion KDL

For quite a while now, it felt like Yeonnam was mostly made up of three major streets and some cute cafés and restaurants. So it was no surprise that in More Than Friends, Kyung Woo-yeon also mentions streets when reflecting about this neighborhood in a conversation with Lee Soo: “[…] I heard somewhere before that streets have life cycles. I didn’t understand then, but I kind of get it now. Streets are similar to people. They were pushed out farther and farther from the center of Hongdae. But they still do well. But then again, they experienced being pushed out, so they knew how to survive.”

18 Again and especially More Than Friends showed us this year that there was more to this vibrant neighborhood than just those particular streets. We discovered a whole new aspect of it together with Woo-yeon and Lee Soo as they walked through Donggyo-ro 46-gil, along with its side and parallel streets;  the characters of 18 Again let us discover (and develop a liking for!) places such as flower shop-café VER’s House and the delicate Dongbaek Yeonnam Store; while both Cheat On Me, If You Can and Kkondae Intern brought the elegant brass and greenery-filled interior of Goldmine to our attention.
— Marion KDL 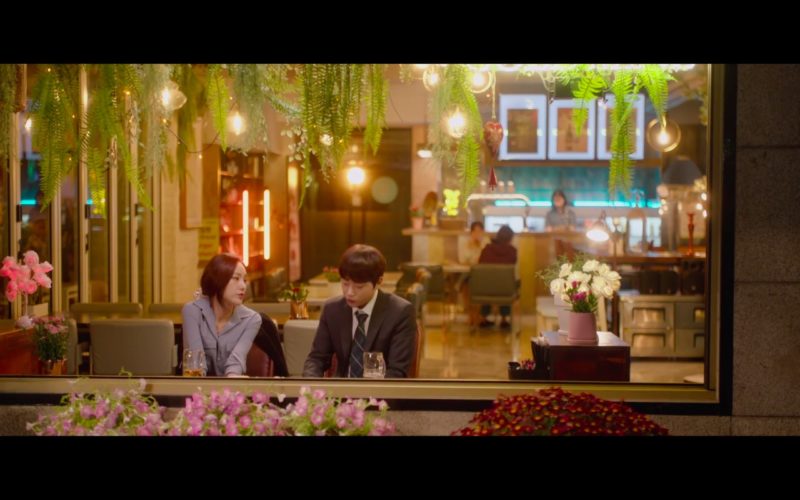 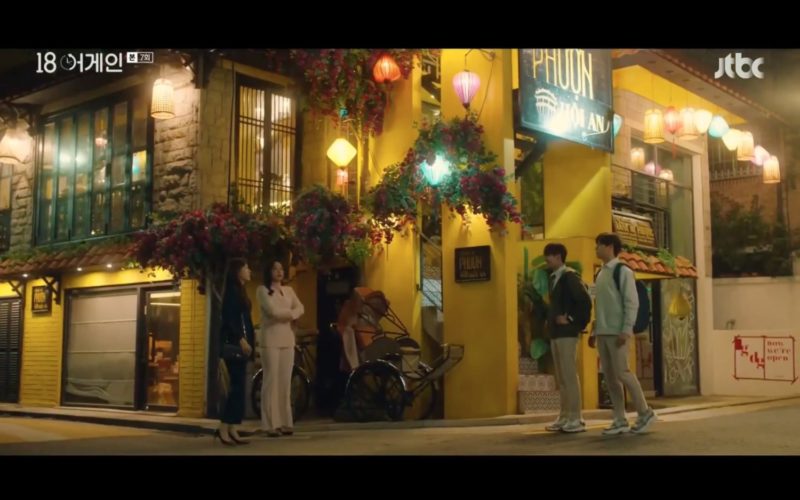 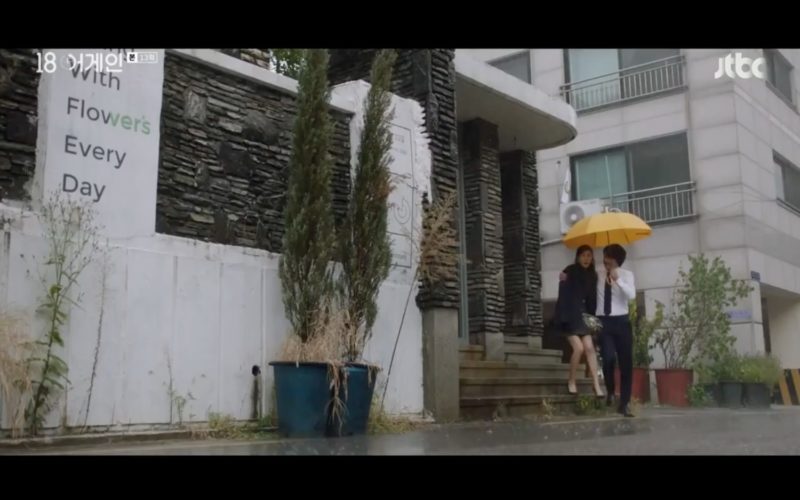 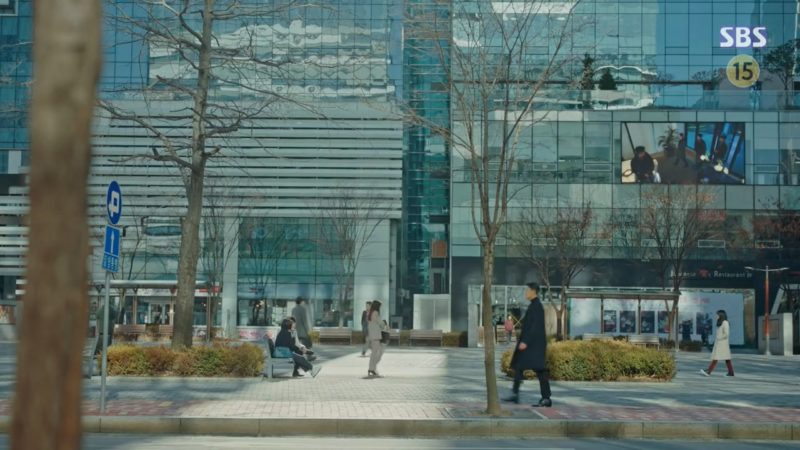 After a brief hiatus from our 2019 list, Sangam returned to the ranks this year thanks to one particular location: Gaon Culture Park, which is #5 on our Most Seen Locations list with a whopping 9 dramas alone! It’s a fact that this neighborhood will always remain relevant to K-Dramaland, particularly with its strong media and broadcasting presence (and companies using their own buildings as filming locations — yes, we mean you, CJ E&M, MBC, and SBS). As Marion KDL pointed out in her 2017 write-up, there is also a natural juxtaposition of this neighborhood with its various parks, which we also got to see in 2020 dramas like My Unfamiliar Family, Find Me In Your Memory, and Born Again.
— Mich KDL 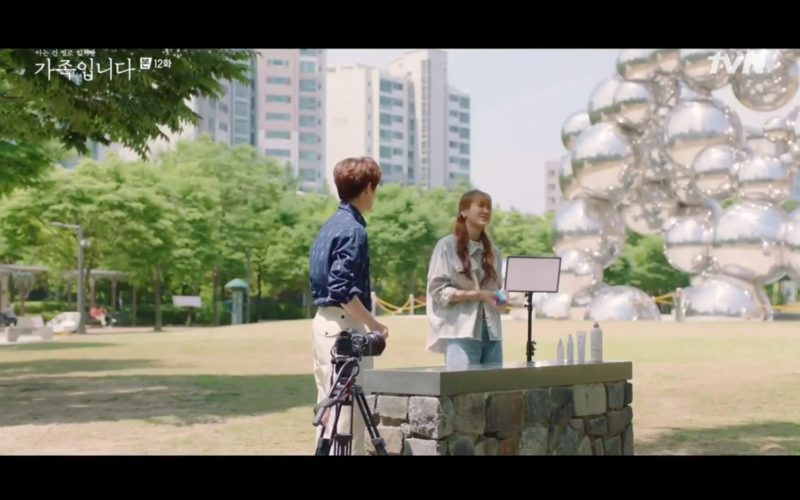 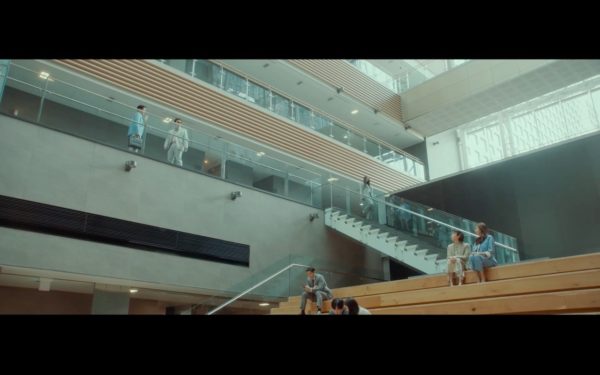 Here to bring that classy touch is the neighborhoods’ fashionable Southern cousin, Cheongdam. It was interesting to see how there were certain location mainstays from here over the course of this year, like Luka 511, Queens Park, and Wolfgang’s Steakhouse. We also welcomed back a luxury watch boutique last seen on our screens in 2018, through Tale of the Nine-Tailed and 18 Again. With Bottega Lounge [보테가 라운지], I was fascinated to find out that the restaurant previously located was featured in the 2013 KBS weekend series You Are The Best!. It just goes to show that with filming locations, one can never know when it’ll make a comeback, as itself or a completely new entity. I guess the same could be said about those who dream of being associated with this particular neighborhood, and whether they’re able to do so as their real selves, or otherwise.
— Mich KDL 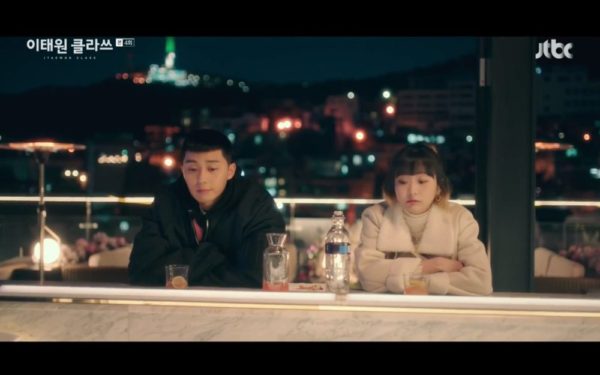 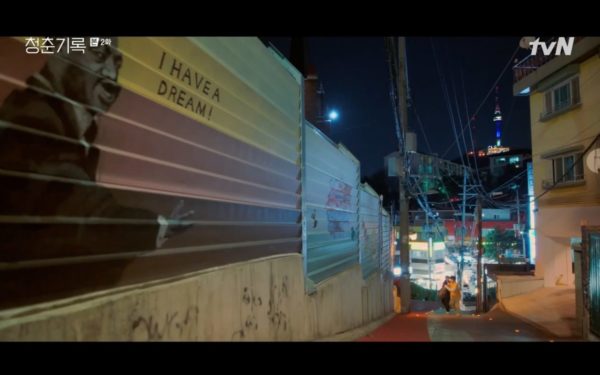 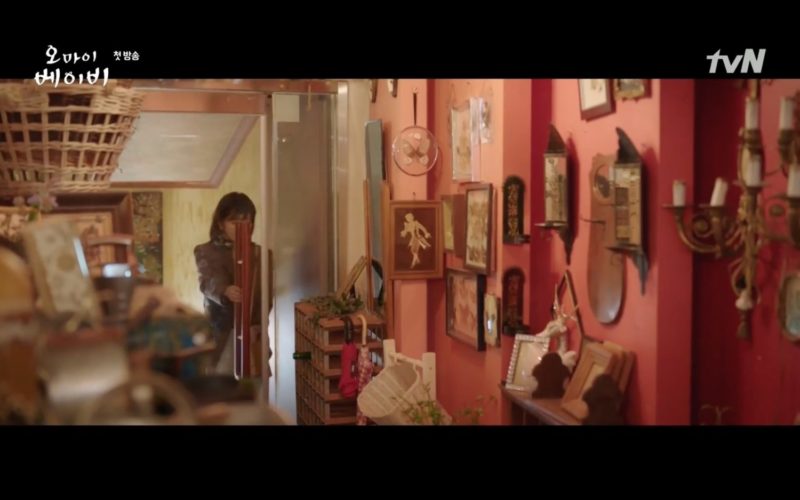 We’ve missed you, Itaewon — and of course, we have your namesake show to thank for bringing you back up on our Neighborhoods list after three years. From a guesthouse to a children’s park, restaurants and even the subway station, Park Sae-roy-i’s homeground was well and duly represented in K-Dramaland in 2020. Not all credit should be given to Itaewon Class alone, however; parts of this diverse Yongsan District neighborhood were also seen in Record of Youth and Oh My Baby.
— Mich KDL

New to our 2020 Neighborhoods list is Sajik in the Jongno District, home to Gyeonghui Palace and the Seoul Museum of History. Along with discovering this neighborhood’s retro vibes (Daeha Sikdang) and revisiting its modern side (Concordian Building), dramas like A Piece of Your Mind, Memorials, and 18 Again interestingly brought Gyeonghuigung 3-gil to our attention, as a street that made some characters recall wistful memories of the past. Another notable location found in this neighborhood is what’s possibly considered to be K-Dramaland’s most popular hotel bar: Charles H., which is also ranked among the top 50 in all of Asia.
— Mich KDL 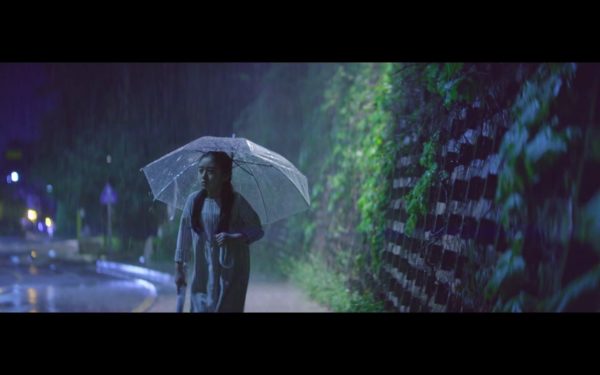 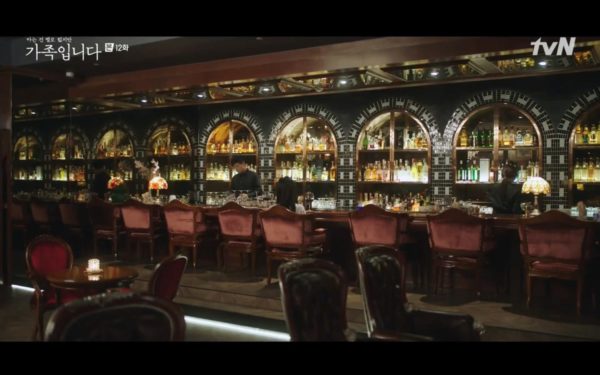 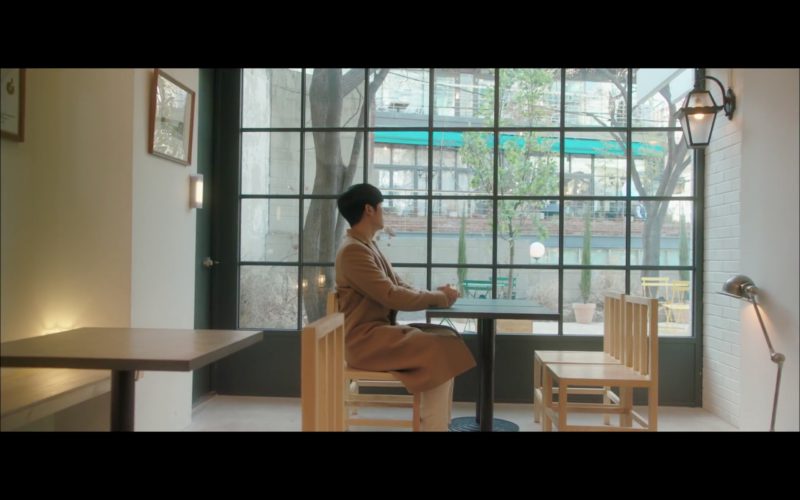 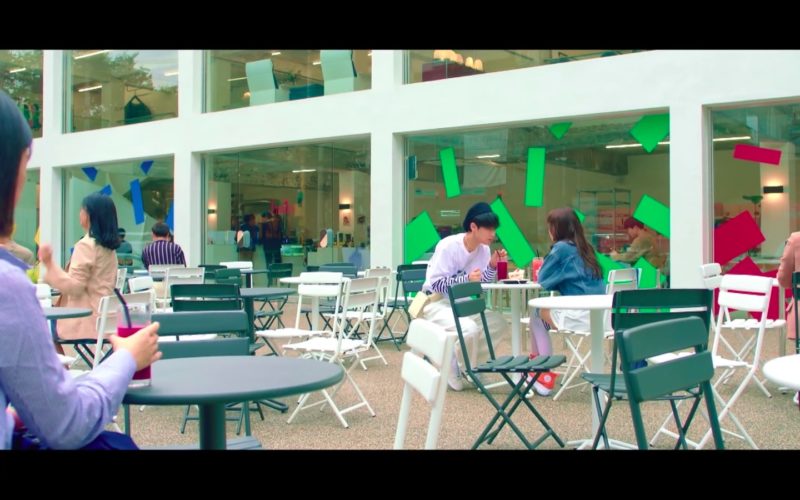 “This town was once famous for ironwork and abandoned factories. But now people come for different reasons… [like] the cafes of Seongsu-dong.” — More Than Friends (episode 7)

Though this neighborhood isn’t entirely new to us here at KDL, 2020’s the year that Seongsu reminded us of its presence. We’re glad to have seen more of it too, lest we miss out on its hip cafes, free art galleries, and probably one of the coolest-looking subway stations in Seoul. Aside from discovering one of K-Dramaland’s ‘newest’ office buildings, and we also had the chance to revisit a homely eatery that continues to provide good food for good company. Here’s to seeing more of Seongsu next year.
— Mich KDL 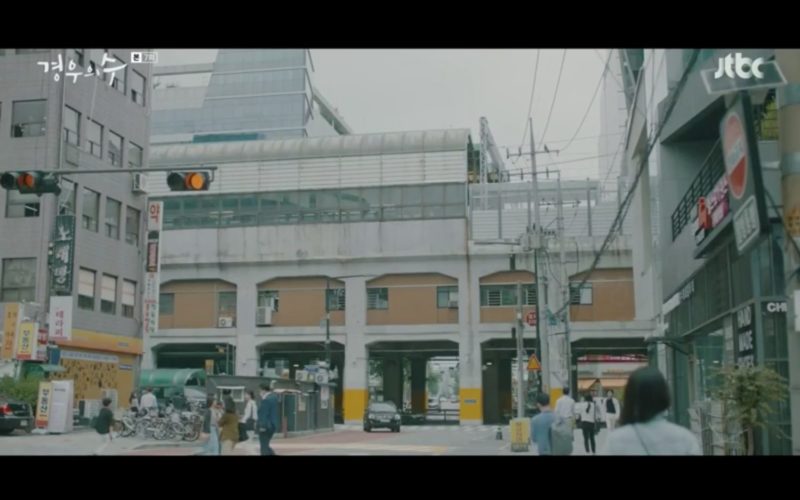 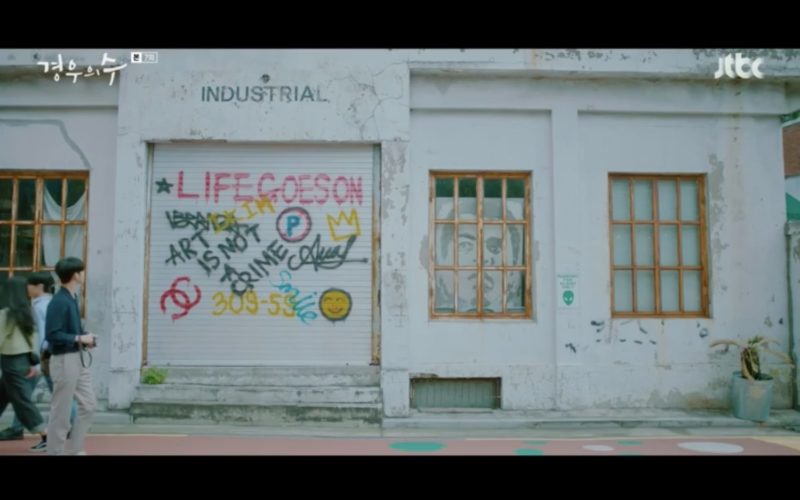 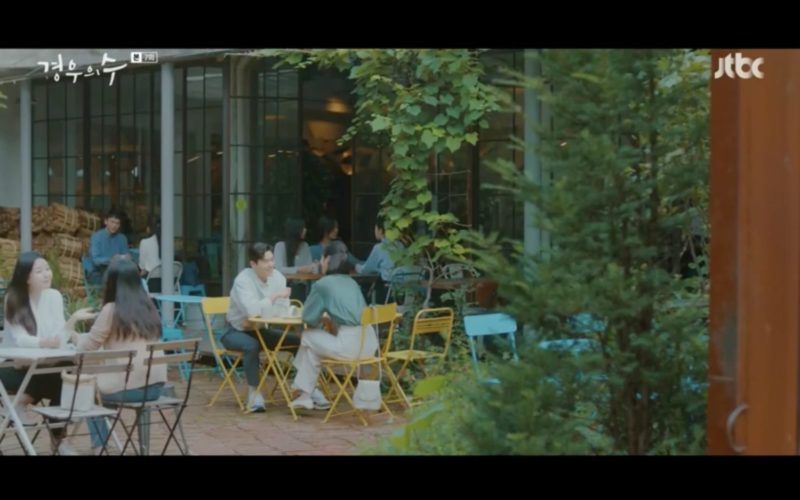 As mentioned last year, I was keen to see which new Munbal/Paju Book City locations we’d uncover in 2020, particularly with the absence of a book publishing-related drama (aside from It’s Okay Not To Be Okay). Safe to say, we’ve not been disappointed. Aside from revisiting 2019 cafe finds like Cafe Paper Tree, Art Gallery Cafe, and i-Style Cafe, we also got to learn about the history behind Eungchil Bridge, and see two of the cutest bus stops on our screens. But the icing on the proverbial cake would be how Forest of Wisdom topped our Most Seen Locations list this year — nothing can really top that, so to speak.
— Mich KDL 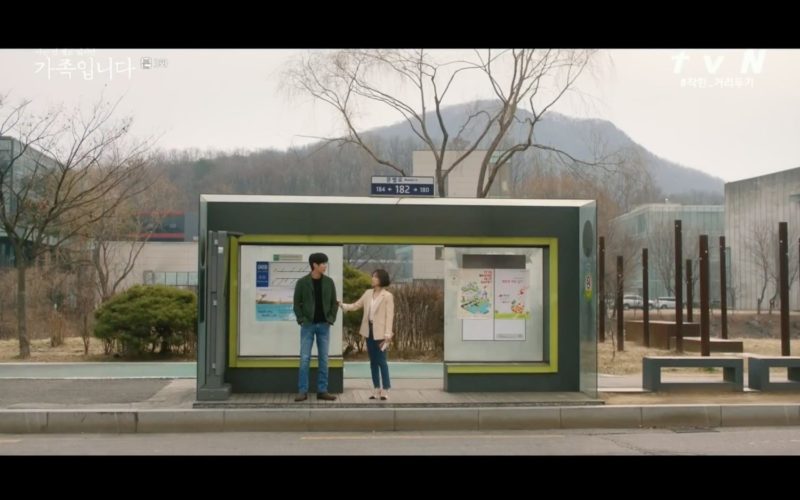 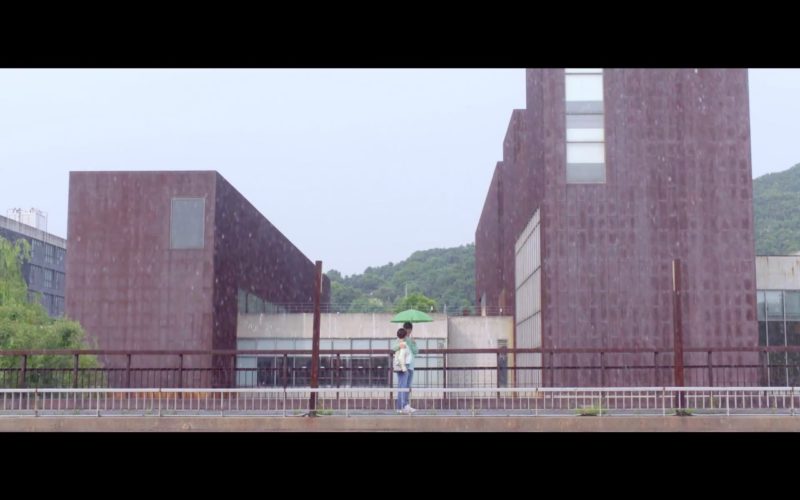 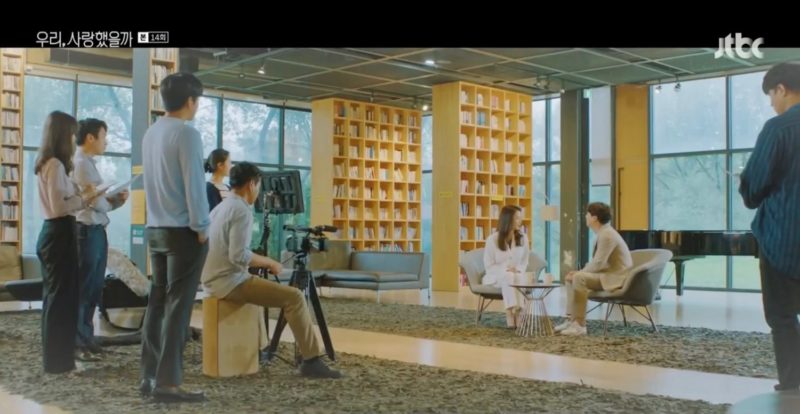 It was a close call for Jongno 1.2.3.4-dong. It actually was very close to making it into this year’s Top 10 List. What I found interesting about that it shows how much K-Dramaland shifted back to Seoul’s center this year, as this neighborhood is right in the heart of the capital city (even more so than Sajik-dong, which is #8 on our list). In fact, it seems like the dormant K-Dramaland princess of the 2000s came back to life, seeing how the area was a staple during those years.

20 years later, this neighborhood of palaces and Cheonggyecheon Stream [청계천] made us feel reminiscent of early 2000s dramas, with its two landmark book stores and two hanok restaurants, the refurbished Sewoon Plaza (est. 1968), as well as one of my favorite K-Dramaland streets. On top of this, we were introduced to the new cultural complex Anyoung Insadong [안녕인사동] and –very uncommon for this neighborhood– even discovered it as a residential district in Do You Like Brahms?. So, will we see ‘her highness’ still gracing our screens in 2021? It’s anyone’s guess, really; but it’ll also be royally welcome.
— Marion KDL 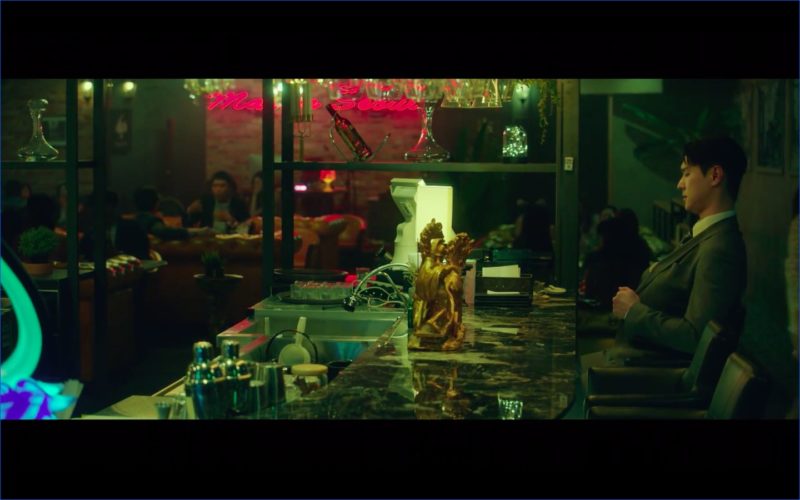 Up till now, Seocho was typically known as the K-Dramaland neighborhood where top listing staple Seoul Central District Court is located. This year, dramas like Alice, Private Lives, Start-Up, and Do You Like Brahms? in particular, gave this neighborhood a lot more contours for and in itself, through its fancy cafés, stylish bars, and swanky restaurants. We also got an idea of how it feels like to walk through its streets, live in one of its slick architectural buildings, or attend a concert at Seoul Arts Center.
— Marion KDL 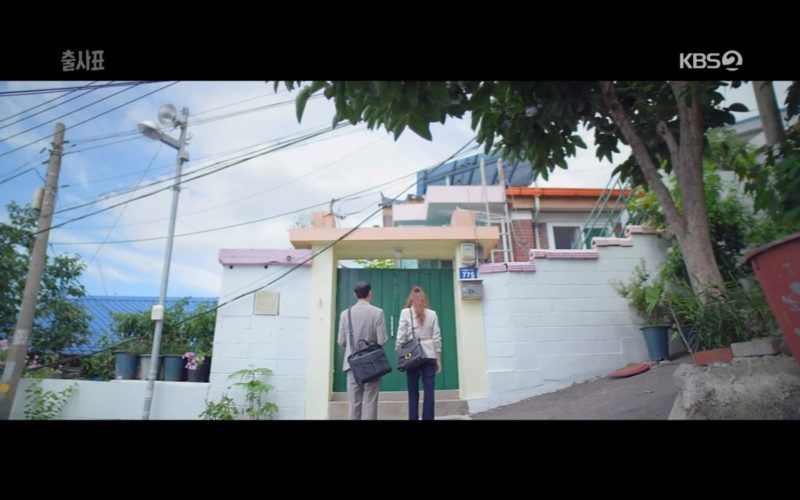 This is the first time a fictional neighborhood has made it to any of our roundups, and we have (more than just) a good reason for that. We wanted to honor the incredible work by the Memorials/Into The Ring team in creating Mawon-gu, the district at the very heart of this drama. It is also probably one of the few K-Dramas that has actually honed in on a specific part of the country to create its world (in this case, Incheon and its districts Dong, Jung, Namdong, Michuhol, and Seo), instead of piecing together locations in cities across different provinces like Search: WWW did. It’s no doubt that restrictions on domestic travel may have had something to do with this decision, but we appreciate how much more authentic it appears on screen. If we had a poll for our Favorite Neighborhood, Mawon-gu has my vote, hands down.
— Mich KDL

Tell us what you thought of this year’s Neighborhoods list! Did any of them surprise you? Did you wish that another neighborhood should have made the ranks? We’d love to hear your swoons and your gripes — leave us a comment!

We’ve got one more KDL roundup for the year coming up next week — so be sure to watch for that! 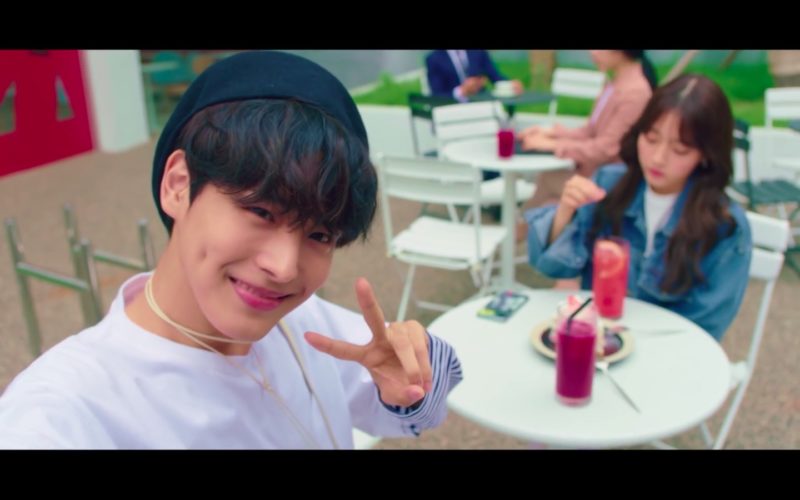