By Marion and Mich KDL

2019 was certainly interesting for us at KDL, not just in terms of locations, but also neighborhoods. Looking back on 2018’s list, it’s fascinating to see how K-Dramaland’s locale choices continue to evolve with every passing year and let us discover new parts of Seoul via our screen.

And even if a neighborhood continues to remain a popular choice, it’s also great to see new places emerge amidst the usual suspects — not that we’re complaining, of course.

It is also the right balance between enough familiarity with certain neighborhoods (knowing/recognizing this street, that place and this place and that one) and new introductions (of neighborhoods but also discovering a new side street here and a new café or restaurant there), which keeps us coming back to K-Dramaland every year.

Without further ado, let’s jump straight into our Neighborhoods of the Year!

Note: Numbers in brackets at the end of each header denotes the number of sites in this neighborhood that have appeared in K-Dramaland this year!

Topping our Neighborhoods list this year (quite interestingly too) is Yeouido, known for being Seoul’s financial and political district, most notably because of the National Assembly Building. K-Dramaland’s most prolific hotel, can also be found in this district.

But Yeouido is not just all concrete jungle, though. There are parks in the heart of the district, along the riverside — and even a yacht marina! Its no wonder it’s been a K-dramaland hotspot this year. And to think that its name means ‘useless’; it really is anything but. — Mich KDL

Samcheong-dong and the neighboring Bukchon Hanok Village were probably the areas most true to themselves this year, by continuously furnishing our screens with tiny boutique and craft shop-filled alleyways to dwell at, cafés and –what they do best–hanoks. It is mainly thanks to Touch Your Heart, Hotel Del Luna, My First First Love, The Secret Life of My Secretary and the end-of-year Never Twice, that these areas graced our screens again. Apart from the usual suspects, 2019 came with two café additions, a new gallery, flower shop and two new K-Dramaland places to stay at — and, of course, new streets and alleyways (Bukchon-ro 5-gil, Samcheong-ro 5-gil and Palpan-gil) to discover. It’s still a mystery to me, though, as to why K-Drama characters never come this part of Seoul to shop in its tiny (designer) boutiques, galleries or craft shops? — Marion KDL

It’s definitely no surprise that Songdo IBD would make it to our Neighborhoods list once again, though had it only just been the regular locations featured this year’s dramas, it probably wouldn’t warrant a mention in this year’s roundup! But more than just its futuristic architecture, we’ve seen a few new sides of this business district featured in various dramas, from restaurants and universities, to hotels and parks. The International Business District subway station, in particular, became a most meaningful location for fans of Search: WWW’s SeolHyun couple — myself included. — Mich KDL

There seems to be a constant year-to-year ping-pong between Hongdae and its neighborhood-neighbor Yeonnam. This is especially for two parallel streets in Yeonnam (Seongmisan-ro 23-gil and Seongmisan-ro 29-gil) which somewhat defined K-Dramaland for us this year — so much so that Mich KDL made her way to one of these streets on a recent visit. We continued to see how inviting Yeonnam is as a neighborhood for people to dwell, and how it has plenty to offer in terms of nice restaurants (see Verde, Sushi Yadori), cafés (see Le Torte and Thanks, Oat), creative places (both outdoor and indoor) and not to forget green spaces. That said, let’s see if we will be talking about Hongdae here next year. — Marion KDL

The addition of Munbal-dong to this year’s list would definitely be attributed to book publishing-themed drama Romance is a Bonus Book, which was mostly set in Paju Book City, located in this neighborhood. It was certainly fun for us to discover what else this specialty book area has to offer beyond the anchor Forest of Wisdom library, such as the cafes and even publishing house pathways! We’re not sure how much more of this neighborhood we’ll be discovering next year, but one thing’s for sure: we’re already looking forward to it. — Mich KDL

Possibly most well-known as the area where Dobong Walnut Bakery is located in 2017’s Strong Woman Do Bong Soon, this neighborhood quickly became the 2019 K-Dramaland hub for rooftop restaurants and cafés. It also comes with one of the highest densities of K-Drama staircases and the loveliest elementary school of the K-Dramalandscape to date. We may have missed out on the 1990s-2000s appearances of this part of Seoul, but we’re sure we’ll be seeing to see more of this neighborhood at the verge of gentrification, in the years to come. — Marion KDL 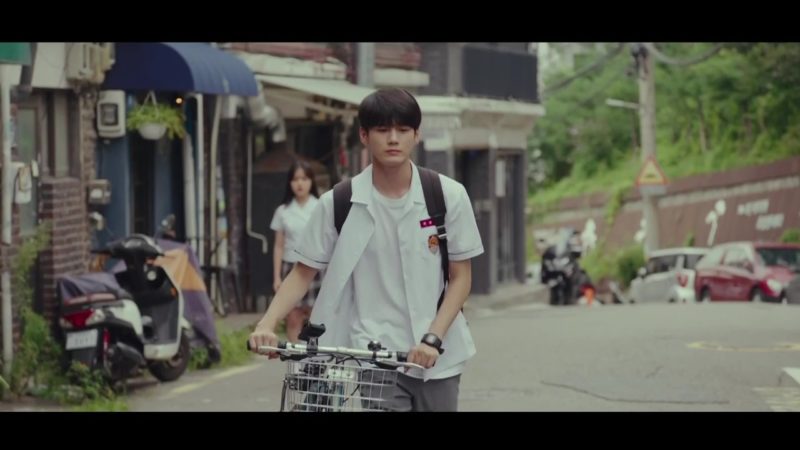 It’s actually a wonder that Hapjeong had yet to make it to our Neighborhoods list all this time! A faithful staple in K-Dramaland thanks to Milky Way Cafe, the whole stretch of Tojeong-ro cafes and stores — including A Place To Go, Broister, La Retro — were given some screen time this year in Love Alarm. Need other food recommendations for the area? Dramas like My First First Love and Mother of Mine introduced us to places like Anjuya, which you can check out on your next visit to the area. — Mich KDL

A final new addition to our most seen K-Drama neighborhoods is Nonhyeon, one of Gangnam’s posher parts. It carved its own niche in 2019’s K-Dramalandscape particularly as a restaurant hotspot with an eclectic mix of higher-end restaurants and rather down to earth, wallet-friendly alternatives. It seems like Nonhyeon made it to this year’s list because of Y Spazio, one of 2019’s go-to restaurants, along with new restaurants and café additions like JP Chef Diary (for romantic dinners), Gyeongseon Jeonjib and Sookseongui Myeongga (for K-Dramaland everyday-style dinner outings) and Ediya Coffee Lab (for a romantic afternoon) pushing this neighborhood up the ranks.

Additionally, this neighborhood appeared this year as one of K-Dramaland’s wedding hall hubs with The Grace Kelly of Partyum House Gangnam and Villa de Bailey (even though it appeared as the exterior of an office space). — Marion KDL

Hope you enjoyed reading up on our Neighborhoods of the Year! Which neighborhoods do you think will make it to next year’s list, or which new ones will emerge as K-Drama hotspots in 2020? Let us know in the comments!

Next week — we’ll be bringing you our 2020 K-Dramaland predictions, for the first time! Till then 😉