Hope you’ve enjoyed the KDL 2017 Roundups so far! We’ve had lots of fun putting them together and reminiscing about some of the moments that took place at those locations.

Which made me (Mich) wonder – what was my favourite K-Drama moment of 2017? It’s quite hard to choose, to be honest! Especially since there were a number of dramas that I enjoyed this year. It took me a while… but I finally chose one.

So, for this final part of our 2017 Roundup, we asked some of our regular contributors about their favourite scene (with the corresponding location) and filming site from this year’s K-drama offerings. Here’s what they had to say!

[* This comes instead of the usual Saturday Summary. We’ll be back with it next week :)]

This scene at Naksan Park was in episode 8 of my favourite 2017 drama, when Se-hee (Kim Min-ki) went to rescue Ji-ho (Jung So-min) from the ‘stalker’ Bok-nam (Kim Min-gue). Well, we now know that Bok-nam isn’t really a stalker (since what happened seemed to just be a miscommunication between the two parties), but it was heartwarming to see that Se-hee prioritized Ji-ho over his beloved cat. He was even up for knocking down the motorcycle and eventually compensating for the damage, despite him previously making a fool out of himself to avoid scratching the bike! And that hand offered by Se-hee to Ji-ho… that simple gesture of his made my heart flutter. He’s my officially my dream namja. 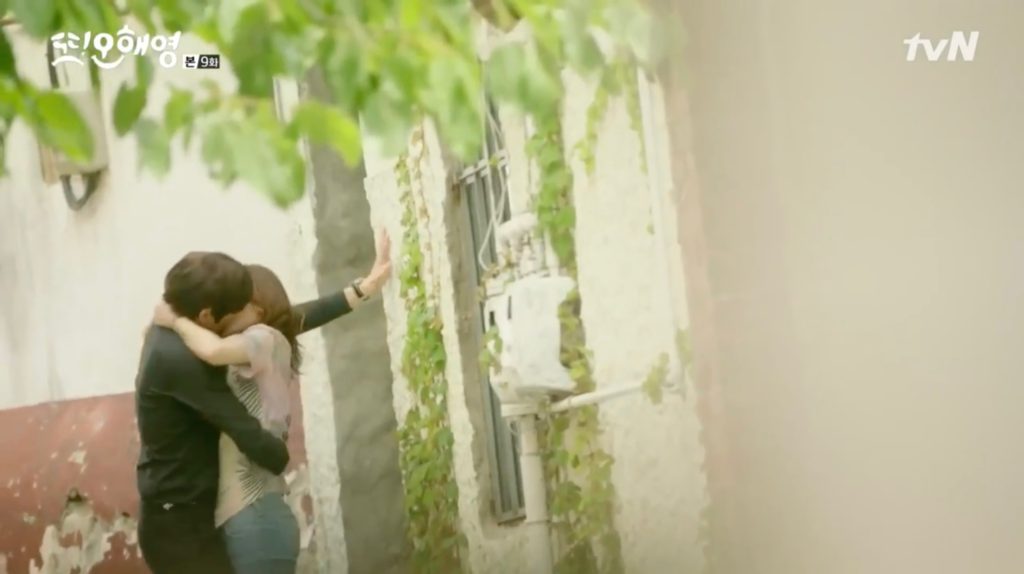 For me, it’s Dalssi Market – simply because there’s something romantic (or should I say… wild? ) that seems to happen whenever this is used as a filming location.

One of my favourite scenes would probably have to be Hyun Tae-woon (Kim Jung-hyun) and Ra Eun-ho’s (Kim Se-jeong) date in episode 13. This scene was purely full of love. Eventually, Tae-woon brought Eun-ho to the place where his mother was buried and lovingly introduced Eun ho to his mother, with so much happiness on his eyes. Later on, he told Eun-ho that he and his father would only go there when they are happy – and he really was that day. 🙂

Honestly, there are so many drama locations from this year that I’d like to visit. But if I had to choose one that will not disappear from my list, it would probably be Haneul Sky Park. Seeing the wonderful view of the city – especially at night – in dramas like Manhole, really amazed me.

Kim Jung-hye sits alone in a posh café while a group of women does flower arrangements at another table. A cup of coffee sits before her, its white cup and saucer each with a red line that perfectly aligns when placed perpendicular. Jung-hye then shifts the cup slightly as she lifts it to her lips, sips from it and puts it down so that it sits in perfect alignment, again – only to repeat the same movement after. A little more than 22 minutes into episode 1 of Avengers Social Club and I was sold. If somebody could think of such a small detail to describe a person so perfectly – a gesture that lasts a couple of seconds – then this drama would not disappoint me. And it didn’t. 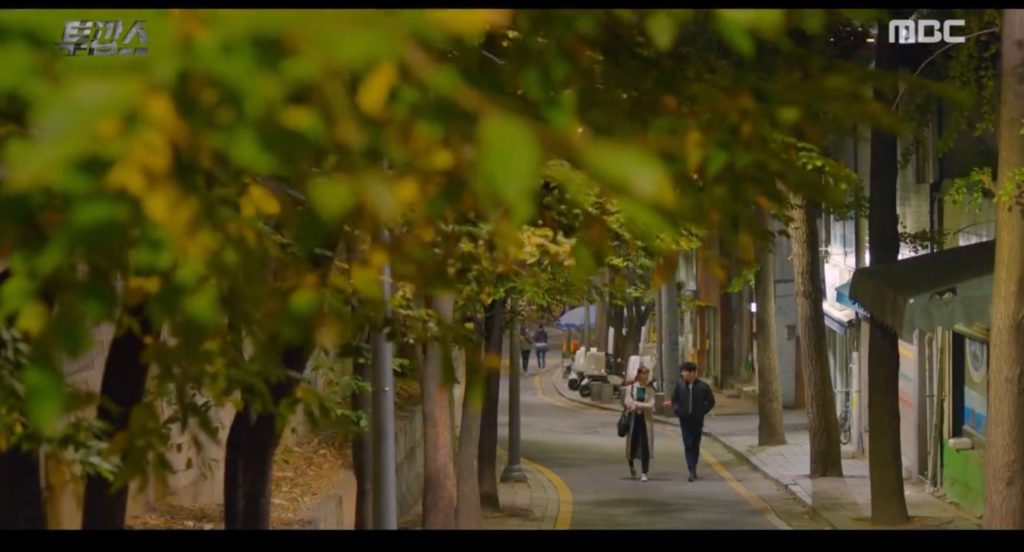 I love Seoul’s alleyways – it has lots of small cafés and boutiques to discover, and the right proportion of traditional housing and palace walls added to the mixed. So when I saw Soo-chang (Kim Sun-Ho) — in Cha Dong-tak’s (Cho Jung-Seok) body — and Song Ji-an strolling down this street in Two Cops, it was immediately added on to my must-visit list.

Call me biased, but the primary reason I enjoyed Strongest Deliveryman so much was because of how fitting the role was for lead actor Go Kyung-pyo. As much as I enjoyed watching him in other K-Dramas (Cantabile Tomorrow, Reply 1988), it really seemed like he was made to play the earnest and determined Choi Gang-soo, both traits which appear to fit him – the person – to a T. 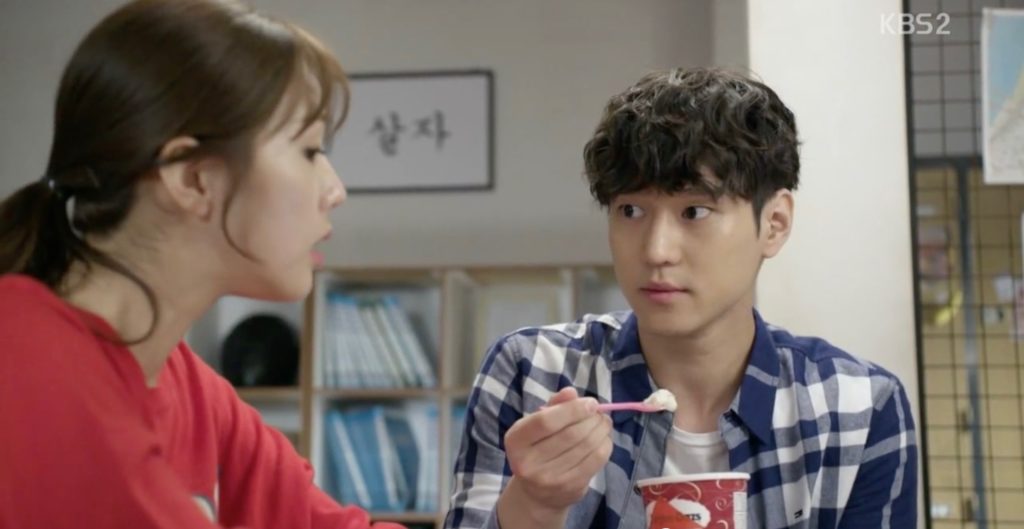 But excuse my fangirl-gush and let’s get with the programme! One of my favourite moments among many takes place in episode 13, and it links two prominent locations in the show. This was when Dan-ah (Chae Soo-bin) pulled an all-nighter to help Gang-soo type out his business plan, with him supporting her by pandering to her every need. “Water… coffee… something sweet…” – and she did give him ‘something sweet’ in return too, lucky him! 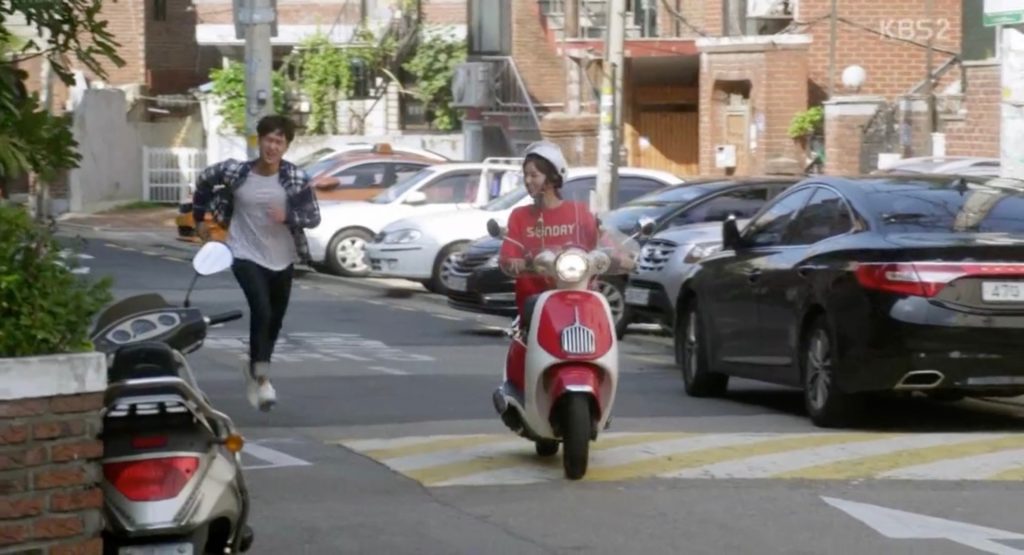 Dan-ah heads off the next morning and Gang-soo offers to take her home. The next thing we know, she’s ridden back home on her motorbike – with a completely out of breath Gang-soo following after her on foot! I’d like to think that the director made Kyung-pyo run a few rounds to really be that breathless haha. Aside from being fun to watch, it was also memorable because it was the scene (after seeing the house a few times) that gave me the hints to track down the location of the house! And the rest, as they say, is history.

This wins hands down for me, especially after I got to visit it on my recent November trip. It was very refreshing (for the senses, and even the heart/mind) to take a stroll along this route on an Autumn weekend morning. Seeing the colourful fall foliage surrounding it was truly the icing on an already beautiful cake!

Episode 10: When Joon-Hyung invited Bok Joo nearby the pond. He bought a lot of snacks to encourage Bok-Joo to eat.

Favourite Filming Site of 2017:
In Kyung Pond at Inha University

Thanks again to Chelle, Deanekitty29 and ruffeecola for sharing their favourite scenes and sites with us!

How about you – what was your favourite scene and site in a drama this year? We’d love to hear about it! Tell us in the comments.

Thanks for following the KDL 2017 Round-ups, and we hope you had fun reliving the many wonderful moments in this year’s drama offerings as much as we did! Wishing you a happy and healthy 2018 ahead – and here’s to more great dramas and filming sites to discover in the new year 🙂