Here is the second part of excerpts from GiveMeSlippers’ respective analysis and musings of five locations important to My Mister/My Ahjussi [나의 아저씨] (tvN, 2018). The first part can be found here.
— Marion & Mich KDL

The Rail Tracks at Ichon-ro 29-gil

The Hoogye rail tracks at Ichon-ro 29-gil [이촌로29길] are one of the most frequently appearing locations in My Mister, and for good reason: they bring out the alpha male in Park Dong-hoon (Lee Sun-kyun).

Dong-hoon is often described as a beta male, as someone who goes with the flow and doesn’t take ownership of his life. Admittedly, Dong-hoon has an unusual level of restraint and tolerance, but that does not mean he is a passive observer of life. He overlooks and tolerates as much as possible, but is quick to take action whenever he deems it necessary. The rail tracks are a testament to this, because that’s where we see Dong Hoon taking action again and again, for better or for worse.

In episode 4, for instance, although Dong-hoon appears calm and collected, he probably feels even angrier than Park Ki-hoon (Song Sae-byeok) at their brother’s humiliation. Instead of lashing out uncontrollably, Dong-hoon channels his anger into a formidable threat while fully maintaining his grace. Not so passive, is it? Similarly in episode 6, had Dong-hoon truly been passive, he would have also ignored Assistant Manager Kim’s (Chae Dong-hyun) drunken accusations. But he sternly confronts and disciplines Kim by these rail tracks. 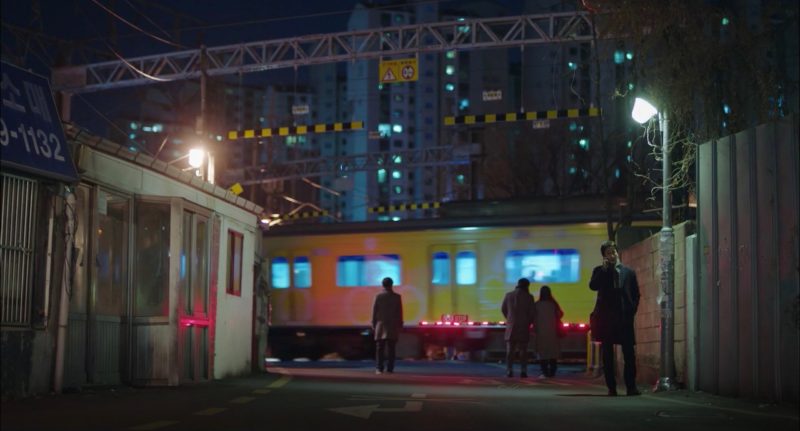 Or, in episode 5, as Dong-hoon lies with his limbs splayed near the snow-lined rail tracks and ominous warning signs, he almost appears to have given up on life. Almost. Until he bravely gathers himself and decides to fight back, thereby taking charge of his life.

The countryside in My Mister is a place to which our characters escape to find peace and rest, and the insights they glean during their excursions often constitute a turning point in the characters’ development. In contrast to the city wasteland, with its crammed alleys and the neutral tones of office cubicles and subway stations, the countryside is replete with life and lush colours and wide-open spaces. These qualities allow our characters to view the most important facts of their lives with better clarity, and to gather strength to act on these insights.

One such location is the temple that monk Gyeom Duk (Park Hae-joon) – once Park Sang-won from Hoogye – resides in. Ironically, the sage-like Sang-won has yet to find peace in this temple, 20 years on after his abrupt flight from home. He is stranded like his truck. He only inhabits this temple physically, because like every good Asian son and boyfriend, his soul is still tied to Hoogye in a suffocating cycle of blame and guilt.

His left-behind never-to-be bride, Kang Jung-hee (Oh Na-ra), likewise mourns for 20 years and hopes to guilt trip him back to her side. Finally, she follows after Omma and Dong-hoon’s footsteps to meet Sang-won at the temple in episode 13. Seeing that she is here, Sang-won delivers a lecture on widening one’s circle of love instead of holding on bitterly to something we cannot attain. It is a lecture not unlike that of Dag Hammarskjöld’s (2006) writings on his singlehood, characterised by “longing, like carnal desire, but directed toward earth, water, sky, and returned by the whispers of the trees, the fragrance of the soil, the caresses of the wind, the embrace of water and light.”

Rattled by her visit, he meditates in his cell for a few days, during which he appears to finally understand he cannot achieve peace unless he resolves what he has left hanging on his conscience. So, he goes back to Jung Hee on a clear sunny day to find a resolution, bringing yellow flowers that symbolise friendship (and back in the Victorian era, jealousy).

His visit symbolically closes the gap between the temple (sacred, solitary, free) and Hoogye (secular, connected, real). Instead of obtaining peace by running away from real life and hiding in some monastery, he embodies the peace that he has been seeking, and may now become a real sage who brings peace to everyone wherever he goes.

Want to Write A guest post For KDL too?