This is what Eun-tak taught Kim Shin (and also us) about the meaning of cherry blossoms in episode 1 of Goblin. She made this fact sound like social-cultural common sense that only I (seemingly) was ignorant about. But this Spring, here’s what I’d noticed: that once the fragile, 10-flowering-days-short light pink petals are on my screen, people in K-Dramaland usually tend to fall in love.

In short: if two people walk or sit under cherry blossoms at the beginning of a show, they will eventually end up together.

Did I just discover a K-Drama trope (which I really was ignorant of until now)? Can cherry blossoms help us predict who ends up with whom? Let’s give it a try. 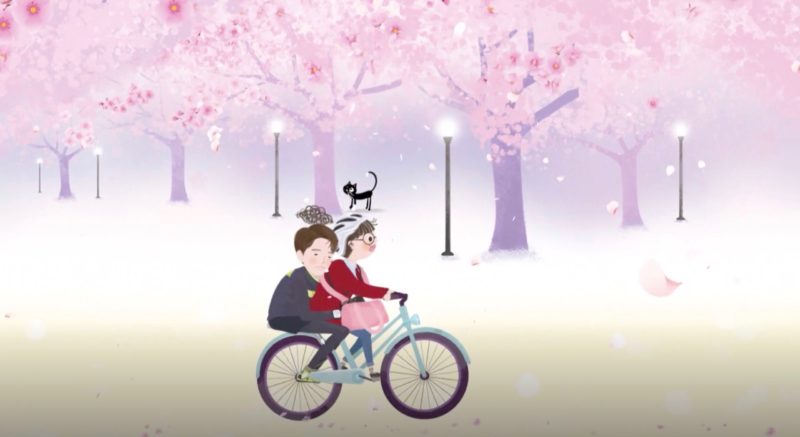 It is in this scene-stealing, breath-taking cherry-blossom scenery at Green Hill Training Center [청려수련원] that Jung Gal-hee’s (Jin Ki-joo) dream of a permanent employment gets shattered when she is fired by her boss Do Min-ik (Kim Young-kwang). Not a good start for a lasting love relationship.

But it is also under cherry blossoms that Min-ik later starts to fall for her. Clearly, even if firing Gal-hee appeared to set them off on the wrong foot, the cherry blossoms at this training facility already lets us viewers in that a love-line will develop between these two. Even more so, it foreshadows this couple’s development and even accompanies this couple in getting to know, and grow feelings for each other.

The same way as for Gal-hee and Min-ik, cherry blossoms — this time at Namsan Public Library [남산도서관] — foreshadow Lee Jung-in (Han Ji-min) and Yoo Ji-ho’s (Jung Hae-in) relationship when, for the first time, they divulge their feelings for each other (and the troubles these feelings cause); and this, under a cherry blossom tree.

‘Foreshadow’ would be too much of a word for Sung Deok-mi (Park Min-young) and Ryan Gold’s (Kim Jae-wook) fake-dating at a cherry tree lined alleyway at Yangjaecheon [양재천]. They might fool themselves here. But did you get fooled?

Park Kyung-sun (Lee Ha-nee) also clearly fell for Kim Hae-il’s (Kim Nam-gil) physical features at first sight and she did not hide her attraction (at least in her self-talk). While bickering through the first episodes of The Fiery Priest/Hot Blooded Priest (열혈사제), they also got closer and finally became partners in crime. Does the splendid cherry blossoms at the tail end of the show in Ilsan Lake Park [일산호수공원], foreshadow a blossoming of a love-line between the two in Season 2? I would be clearly in for the ride.

A year earlier, at the same park, Mong-mong (Elkie from CLC) confessed her feelings to Myeong-ha (Kim Min-gue) here, and it presumedly worked out.

On the other hand, what we see at Namiseom Island/Nami Island [남이섬 종합휴양지] is not a first love come true or a love-line that will develop in front of us. Instead, what comes true here is probably one of the most important forms of love: self-love. Here, Park Sun-ja (Kim Hae-sook), a person who has dedicated all her life to her family and children, learns to give a little love to herself; by having a good time and escaping the daily grind through a day trip with good friends. 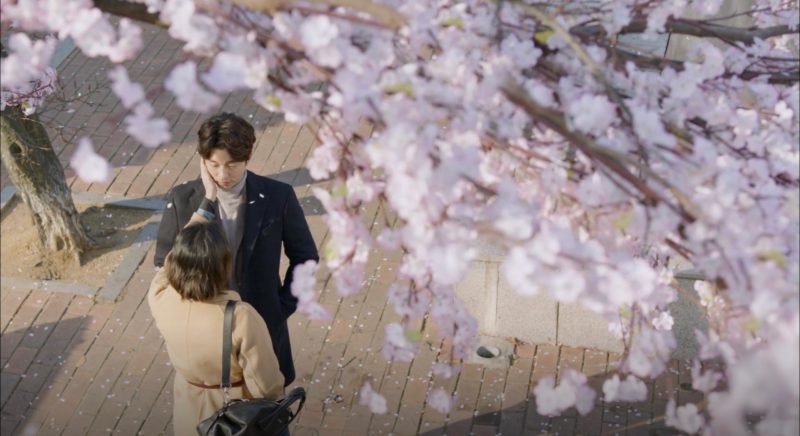 And a last evidence that Eun-tak is right is her own love-story. It is under a cherry tree in bloom with petals flying in the air at Incheon Jayu Park/Incheon Free Park [인천자유공원] that Kim Shin (Gong Yoo) tells her that she was all his first loves and asks her to marry him.

But what happens when cherry blossoms are not in full bloom anymore? And when we see more petals flying through the air than flowering cherry trees? Would these cherry tree flower petals still work their magic on a couple to fall in love?

When Kim Dan (Kim Myung-soo) and Lee Yeon-seo (Shin Hye-sun), for instance, are both sitting on his favorite bench located under a cherry tree at Incheon Grand Park [인천대공원], would the last flying petals also giving their last grace to the blooming love of these two — before falling to the ground and marking the end of spring? Or will their love be one that’s short and glamorous, before being swept away by the fact that his time on Earth is counted (or the rain, in the case of the petals)? 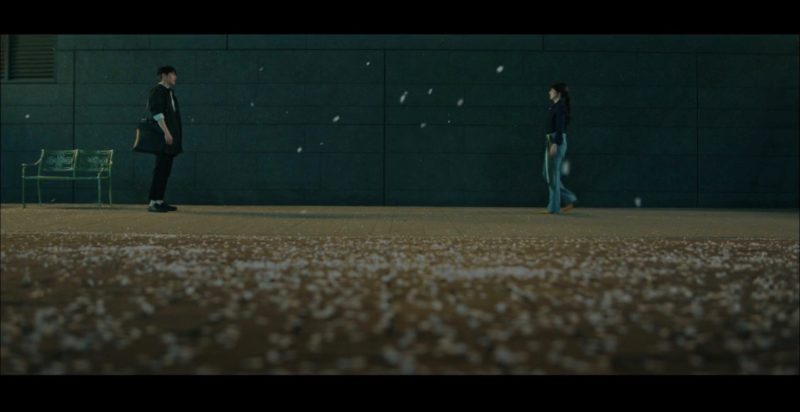 We can ask the same question for these two, Bae Ta-mi (Im Soo-jung) and Park Mo-gun (Jang Ki-yong), when he tells her that he is single –surrounded by flying cherry blossom petals in front of her office building at noon— and she then very clearly puts an end to their blossoming love-story at night at the same location; this time with cherry flower petals slowly accumulating at their feet.

Does the absence of cherry blossom also predict an unfulfilled love?

Let’s take a look at Nam Eun-ki’s (Ahn Bo-hyun) case. It was not his easiest competition, even as a Judoka. He had kept his first love for Seong Deok-mi secret all the time… until Ryan Gold arrived on the scene. Too late, as he notices himself and asks his mom why love, that should be beautiful, hurts so much. The cherry blossoms at Balbadak Park [발바닥공원] — the scenery that surrounds him when talking to his mother — just shows as much: the cherry blossoms are gone; only light effects gave us the impression that they are still there. 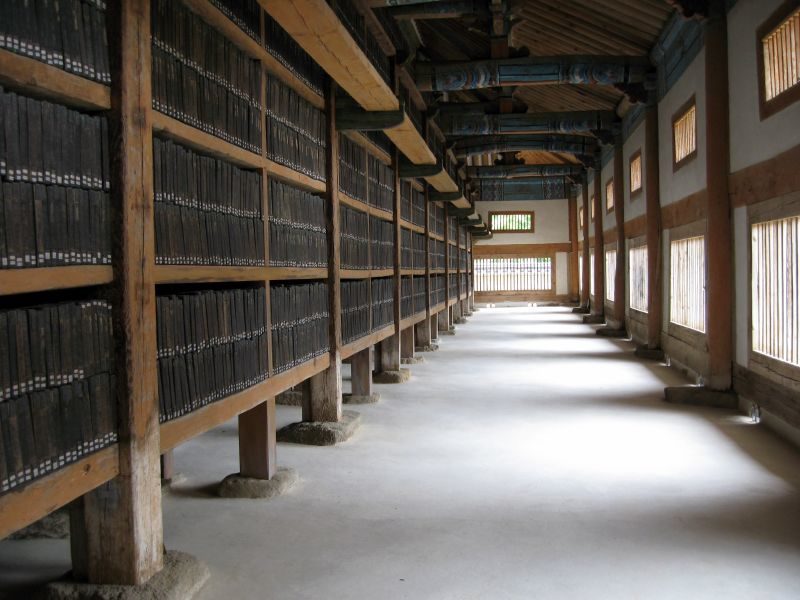 Aside from Eun-tak’s ‘first love’ explanation — which is, of course, one that is played up a lot in Korean dramas —  cherry blossoms also represent “outstanding beauty” (뛰어난 미인), according to Naver Wiktionary and “purity/chasity” (순결) and “wild/savage beauty” (절세미인) when following the Naver Dictionary entry in the language of flowers.

One question that seems to arise regarding cherry blossoms and its celebrated status in South Korea, is its origins. This question ties in particularly in relation to neighboring Japan and its long-standing tradition of admiring cherry blossoms. It is such a highly sensitive matter in South Korea, that they went as far as for DNA-testing the cherry trees for a final answer.

What everyone seems to agree on, though, is that cherry trees have made up South Korea’s landscape for a long time; at least since the Kingdom of Goryeo (918–1392). There is actually hard evidence for this in the form of cherry tree woodblocks that the celebrated Tripitaka Koreana (팔만 대장경 or 고려 대장경) was mainly printed on, as attested to in an analysis by Sang-jin Park titled Under the Microscope: The Secrets of the Tripitaka Koreana Woodblocks (2013 [2007]).

Another common understanding seems to be that the cherry blossom festivals were instated under South Korea’s Japanese colonial rule. In this sense, they are described by professor of Korean Modern History, Hur Hyun-hye (허동현), as a “Japanese heritage” and hence a symbol of Japanese militarism that should be, according to him, remembered when enjoying the cherry blossoms.

Cherry tree flowers usually blossom on our screens from April through to June. But, in case you’re interested in seeing them in real life, take note that cherry blossom season actually only happens within a very short span of time: from early to mid-April. There is an annual prediction for when these flowers will come into bloom in each province, and when the respective cherry blossom festivals are — so, you’d want to be in South Korea at the right time!

At KDL, we’re just as enthralled by the beauty of these blooms as you probably are; if you’d like to include some nature viewing in your K-drama location hunt, here’s a list of K-Dramaland cherry blossom sites that we’ve seen on our screens to date — who knows? You might just meet someone special under the falling petals. 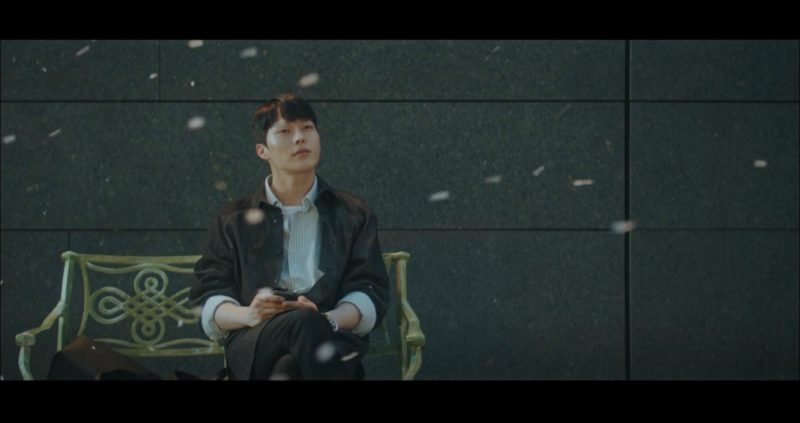 We’ll continue updating this list, so check back as and when you’re planning your next Spring visit!
Last update: 27/06/2020

In the meantime… thank you, Spring.
Welcome summer!