2019 will probably go down in K-drama history as the year that viewers were reminded of the joy of reading, thanks to book publishing-themed drama Romance is a Bonus Book (RIABB). Many came away inspired to start picking up their books again (myself included), and even developed an appreciation for those in the publishing business!

But truth be told, K-dramaland characters have had quite a love affair with books over the years, and it’s not uncommon to see their rooms and offices filled with them. They can be seen reading (real paperback or hardcover books, not on tablets) at home, at cafes, even while commuting from place to place. And of course, they’d occasionally even pick up a book or two at their favorite bookstore to add to their growing read list.

There’s just something about a bookstore that makes you just want to lose yourself in it, even if only for a while. Whether you’re a bookworm or a book newbie, here are some book-related places in K-dramaland to check out on your next trip to Korea!

This Hyehwa bookstore is an extension of local Korean publishing house House In Mind (생각속의집), which publishes books related to psychology and mindfulness. It’s probably best remembered, though, as the bookstore that Hae-rin tracked Seo-joon down to in episode 13 of RIABB — because what’s not to love about seeing her and Geum-bi, Seo-joon’s golden retriever, with red ribbons around their heads?

As seen in Mother of Mine (2019), this bookstore has an Instagrammable arc display that’s reminiscent of those at the iconic The Last Bookstore in Los Angeles. Though Arc.N.Book is less than a year old (it opened in November 2018), it seems like this “city culture complex” — aimed at promote reading as a culture and lifestyle — has been doing just that with its cozy, welcoming space. It also prides itself on “curating special books that cannot be found easily”.

Named after its owner, a former advertising copywriter, Choiina Books in Yeoksam is a haven for those needing a quiet reprieve from the bustle of the city. This eponymous bookstore also offers a curated section of books, some by the owner herself, with “handwritten cards that explain why the particular book was chosen and a simple profile of the recommender”. Keen to read the book you’ve just purchased? You don’t have to hang around the store like Tae-oh and Se-hyun from My First First Love (2019) did while they were there; instead, bring it up to the cafe within the store. Note, however, that only purchased books can be brought in.

Considered a new kid on the bookstore block, the newly opened Seoul Book Repository (or ‘Seoul BoGo’) is touted as “Seoul’s first public secondhand bookstore”. It has over 120,000 secondhand books on sale in this former warehouse, from “25 secondhand bookstores scattered around the city”, like those at Cheonggyecheon Stream‘s secondhand book street. Just like Arc.N.Book, Seoul BoGo’s steel semi-circle frames are certainly another picture-perfect attraction — and it has already attracted much interest since it was featured in Hotel Del Luna (2019)!

Located on the 2nd and 3rd floor of Blue Square in Hannam, Bookpark specializes in natural sciences, arts and humanities books. This café-bookstore has been featured in dramas like RIABB and Rich Man (2018), and the movie A Tiger In Winter (2018).

“I like local, independent bookstores,” Kang Dan-i tells Ji Seo-joon while perusing this bookstore in episode 7 of RIABB. “These places are like a space that introduces books to the readers.” And it truly seems like Byeolcheck has lots to introduce to their customers, as seen by the many colorful and quirkily-designed book covers on their Instagram feed. They also offer various workshops at their humble space in Yongsan, ranging from acting and writing classes, to those in hand-binding and crocheting.

This is probably a familiar sight to many Goblin fans; that’s because Hanmi Bookstore (listed on KDL as ‘Bookstore BookNStory’) is best known as Kim Shin’s hideout in the 2016-17 hit drama series. Established in 1955 along Baedari Secondhand Bookstore Alley (배다리 헌책방 골목), this quaint Incheon secondhand bookstore is probably the second oldest in this list, just a few years behind Daeoh Bookstore (see below). While its yellow exterior is clearly its signature look, Search: WWW (2019) showed us that there’s more to it than meets the eye, especially once the shutters are down.

How about a drink to go with your book? Check out these K-drama-featured book-cafes:

With its close to 70-year history, Daeo Bookstore (also listed on KDL as ‘Rank and File Bookstore’) is quite possibly the grand dame of second-hand bookstores in Seoul. Named after the then-newly married couple who owned it, this Seochon Village (서촌마을) and Cheongunhyoja establishment continues to stand proudly in the neighborhood that it’s been in since 1951. It was even featured in the 2013 drama Shark and in Super Junior’s Yesung’s ‘Paper Umbrella (봄날의 소나기)’ MV (2017).

If you’re visiting, take note that you can only take pictures of the place when you purchase a drink at their cafe. Otherwise, filming/photo-taking is strictly prohibited.

Located in a quiet part of the trendy Yeonnam neighborhood, “The Story” is just the place for those seeking somewhere conducive to study or read. Don’t expect any fancy cafe-style offerings here though; it has a simple drink menu that’s enough to quench your thirst, or provide you with enough caffeine for the rest of the day!

If Forest of Wisdom in Paju Book City (see below) is too crowded for your liking, steal away from the bustle of human traffic and hide out at Bookcafe Noon instead, which is just across the street. After being welcomed at the door by a quote from author Mark Twain (“Good friends, good books, a sleepy conscience: this is the ideal life.”), head in and pick something sweet from the menu (it serves bingsu – shaved ice!) and make yourself at home in the cafe’s cozy and well-decorated interior. If you’re lucky, you’d be able to sit at the table and seat that Ji Sung sat at in Familiar Wife (2018).

Even before entering Mr. Vertigo Books, you might be surprised to see that this Baekseok bookstore has ‘BEER’ written on their window! They indeed have craft beer on their cafe menu… and the reason for that? Simply because the owner — who formerly worked in online retail for a big bookstore, and also in publishing — likes beer. “I don’t drink enough to get drunk,” he said in a 2015 interview with MyGoyang, “I just sip on beer very often.” Another interesting fact about this bookstore, which was seen in Because This Is My First Life (2017), is where it got its name from. Aside from it being inspired by the book of the same name by American author Paul Auster, it’s also the owner’s nickname — as his name in Korean (Hyun-hoon, or 현훈) partly means ‘vertigo’ (현훈증, hyunhoonjeung).

As of July 2019, this bookstore is now located at Bella Citta [벨라시타].

Here are two book-specialty areas that every book-lover has to visit!

Ask anyone about the city of Paju, and this is one location that would most likely be mentioned. Paju Book City is best known for being home to around 250 companies across the spectrum of book publishing, “from planning to printing and distribution”, along with numerous other bookstores, cafes and art galleries within its midst. It’s even claimed that “books outnumber people by a ratio of 20-to-1” in this unique city! The most notable location here would have to be the Forest of Wisdom library, whose endless wooden shelves of books were prominently featured in dramas like Chicago Typewriter (2017) and Why Secretary Kim (2018). Most recently, of course, it was aptly featured as the HQ for Gyeoroo Publishing in RIABB. That aside, be sure to check out the other K-drama filming locations in the area!

If you’re heading to Busan, a visit to Bosu Book Street is most definitely in order if you’re in the Gukje Market vicinity. It’s said that its history dates back to the 50s and 60s, when refugees from the war “were forced to sell their beloved possessions” — among them, books — in order to survive. Considered a “proud attraction” of this port city, this book alley continues to charm both locals and tourists alike with its walkways lined with piles of books written about various topics, in different languages. Clearly, Louis from Shopping King Louis (2016) was also charmed enough by Bok-shil to kiss her here, amidst all these literary works!

“We are all like books. We wait for someone to find us and open us to see what’s inside.” This RIABB quote is a sentiment that’s most likely shared by bookstores aplenty. With this, we hope you have a fascinating time in your bookstore(s)and/or places of choice, and may you continue to discover, and rediscover the joys of reading 🙂

Which of these book-related places are you going to add to your next Korean trip itinerary? Let us know in the comments!

Here are more of our book-related posts on KDL: 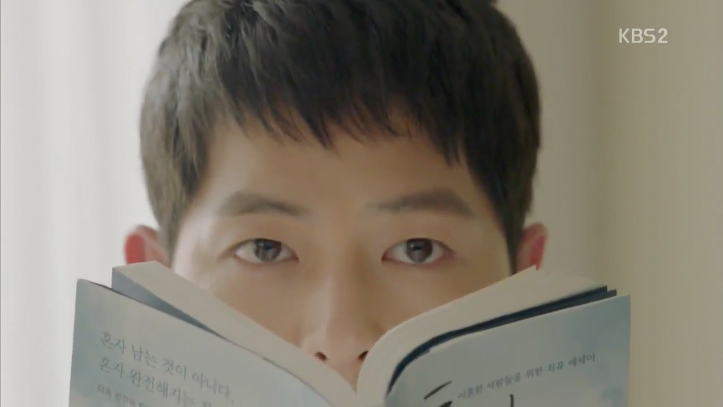